The Chaos Space Marines are set to receive a huge wave of new reinforcements in the near future – not to mention the amazing Daemonkin units in Warhammer 40,000: Shadowspear – so this week, we’re taking a closer look at the Traitor Legions themselves. Give praise to the Dark Gods, as today we’re looking at their most devout servants, the Word Bearers.

Who are the Word Bearers?

The Sons of Lorgar were once the most loyal of the Space Marine Legions, openly venerating the Emperor as a god and raising great monuments in his honour. But rather than rewarding such devotion, the Emperor punished the Word Bearers for their worship. Lorgar, the Legion’s Primarch, took his father’s spurning personally and sought elsewhere for powers worthy of his dedication. First Chaplain Erebus and First Captain Kor Phaeron had already begun to worship the Dark Gods in secret – encouraged by two of his most trusted advisors, Lorgar became the first Primarch to turn to Chaos, and his Word Bearers followed him. 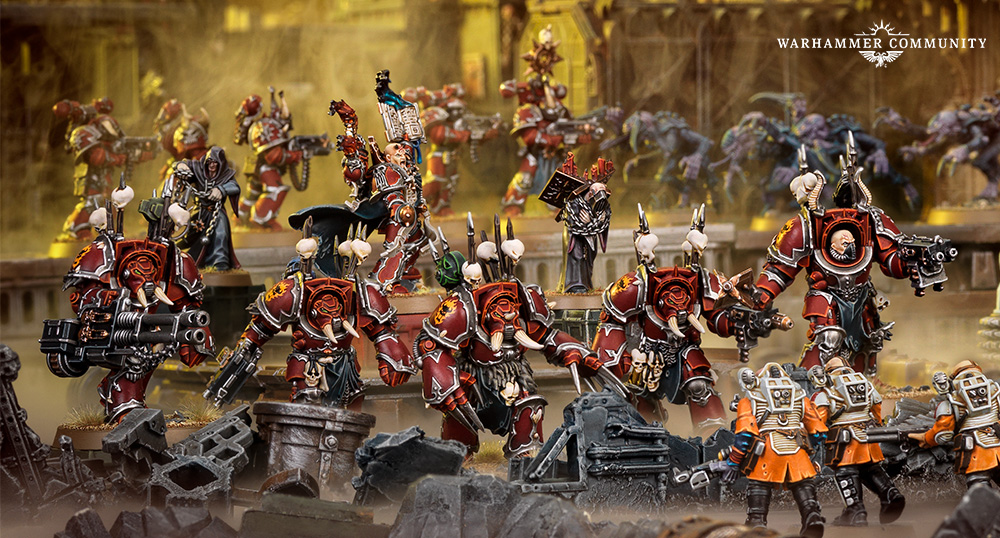 Of all the Traitor Legions, the Word Bearers are by far the most zealous, chanting blasphemous catechisms to the Dark Gods as they do their unholy work in battle. They are often accompanied by corrupted cultists and the Daemons that their rituals have summoned forth from the warp or bound within fearsome war engines. The Word Bearers are far from mere fanatics who blindly fight for their infernal masters, however. They are Space Marines first and foremost, and so combine their frenzied devotion with disciplined battlefield tactics and ruthless efficiency.

A council of nine Chaos Lords and Dark Apostles of the Word Bearers – known as the Coven Triplicatus – has accompanied Abaddon to Vigilus. There, they seek to raise the warp-tainted Noctilith Crowns at key nexus points across the world’s surface to bring about its damnation.

The zealous determination with which the Word Bearers fight is one of their greatest assets. This is represented by their Legion Trait, which makes them incredibly resistant to the effects of morale and serves as a dark mirror to the And They Shall Know No Fear ability of loyalist Chapters. 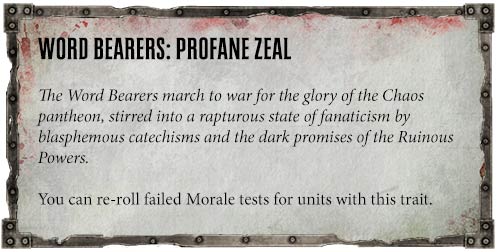 If you’re looking to take your Word Bearers army to the next level, the new rules in Vigilus Ablaze and Codex: Chaos Space Marines will enable you to field new and improved HQ choices and powerful Specialist Detachments that really play to the character of the Legion. Let’s take a look at a few of them… 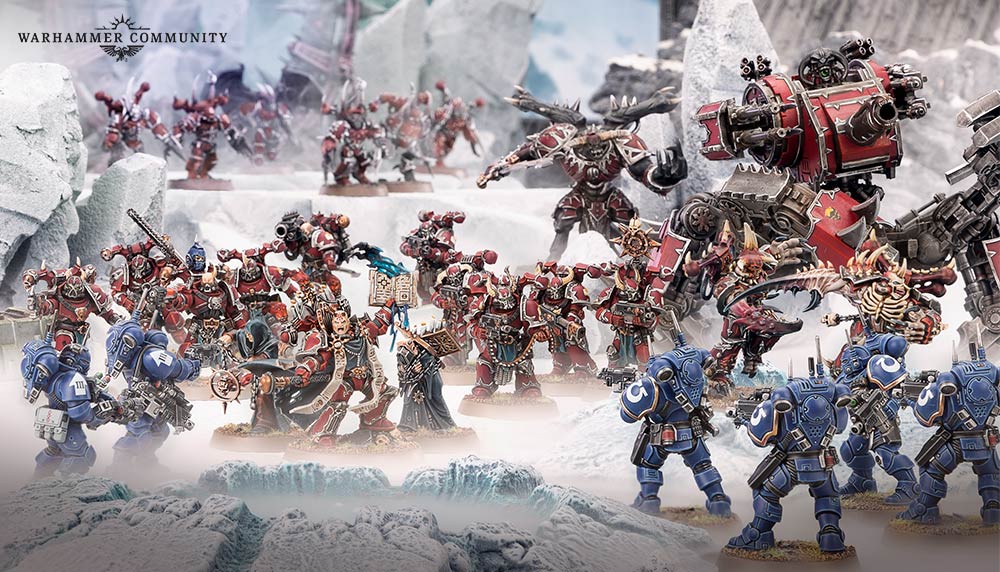 The Word Bearers are renowned for the demagogues who rise within their ranks, their oratory able to inspire entire populations to overthrow the oppressive yoke of the Imperium. The most famous of these is Erebus, who became the first of the Dark Apostles – a rank now commonplace among the Traitor Legions* and especially within the Word Bearers.

Along with a shiny new miniature, Dark Apostles have been blessed as unholy conduits of the Chaos Gods. In addition to granting their Leadership characteristic to nearby <Legion> units, Dark Apostles can now chant prayers to inspire their brethren. 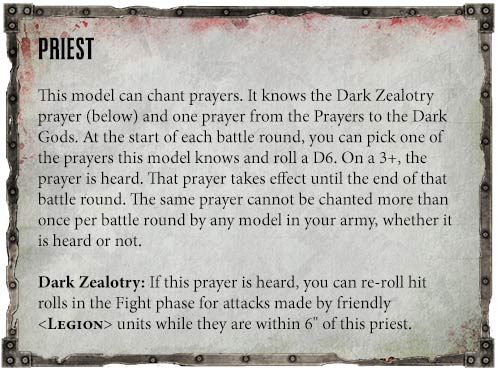 There are six other Prayers to the Dark Gods to choose from and an additional prayer dedicated to each of the four Chaos Gods if your Dark Apostle bears their mark. One example is Omen of Potency, which will turn your Dark Apostle into a frenzied killing machine!

To all but guarantee that the Chaos Gods will hear your prayers, simply take a pair of Dark Disciples with your Dark Apostle for a handy boost to your rolls. 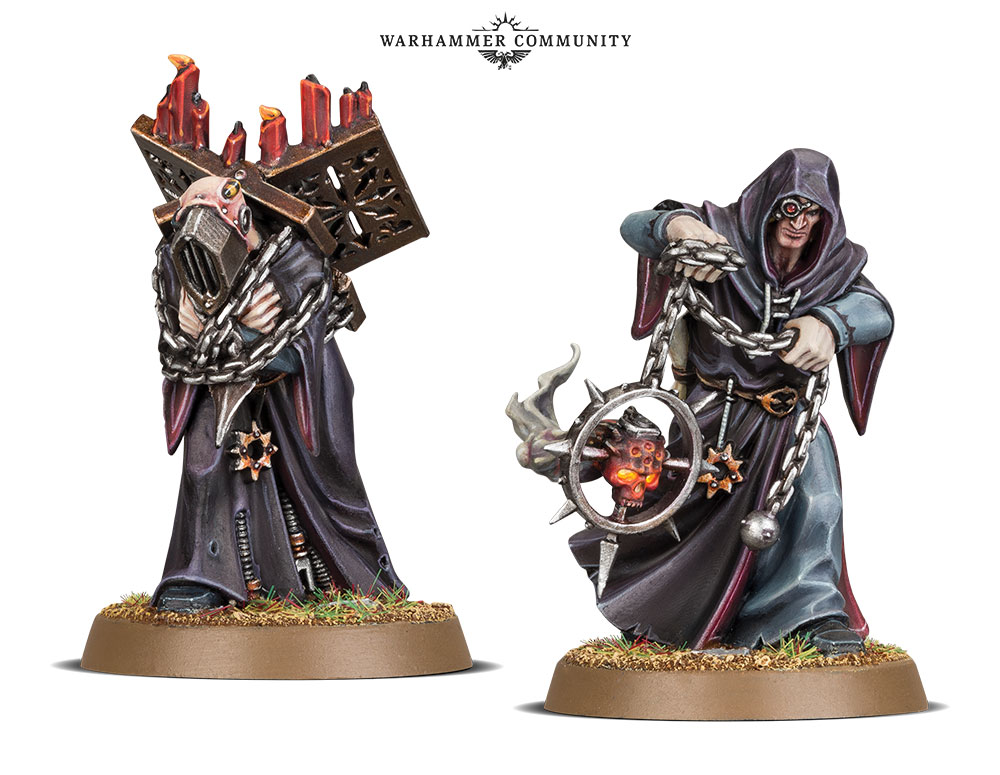 In Vigilus Ablaze, there is a Specialist Detachment that is as a gift from the Dark Gods to the Word Bearers – Daemonkin Ritualists. 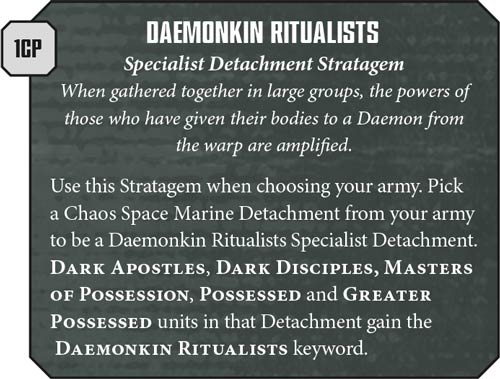 You can give your Detachment’s firebrand of choice the Shepherd of the True Faith Warlord Trait to spearhead an attack and bombard your opponent with a shower of mortal wounds in the process. 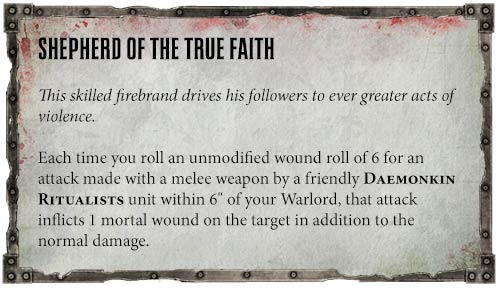 Masters of Possession and (Greater) Possessed 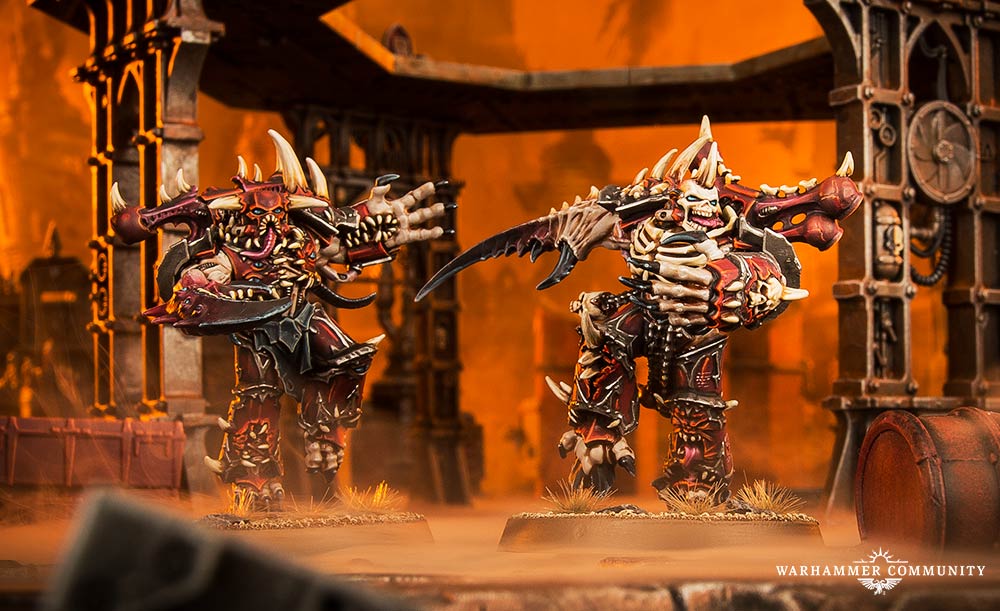 The Word Bearers are among the most skilled practitioners of all the Traitor Legions in the dark art of summoning and binding Daemons to suitable hosts – after all, Argel Tal and the Gal Vorbak were the first examples of this practice during the Horus Heresy, so it’s fair to say that the Legion set something of a precedent in the field of possession!

A Master of Possession from a Daemonkin Ritualist Specialist Detachment can serve as a focal point for a powerful Stratagem that augments the already formidable combat prowess of your Possessed and Greater Possessed to new levels of horrible! This Stratagem will stack especially well with the Strength bonus from the Locus of Power ability of the Greater Possessed. It’ll be a slaughter!

Between Shadowspear, new Dark Apostles and Vigilus Ablaze, the faithful throngs of the Word Bearers are better represented than ever before! If you’re looking to kickstart your Word Bearers collection with a bang, the Warhammer 40,000: Shadowspear battlebox is the perfect place to start, and is available in stores and online now.

If you want to catch up with your Word Bearers reading, in the absence of the fabled Book of Lorgar, grab the epic Word Bearers omnibus by Anthony Reynolds.

*So, the keen-eyed among you might have noticed a new Dark Apostle in the image above. He’ll be available soon, but in the meantime, we thought this would be an ideal opportunity to show you the model painted in the colours of the Black Legion – looks like he might be on his way to Vigilus…

With Vigilus Ablaze on the near horizon and the events in the escalating conflict coming to a head, we’re taking …