Kill Team is nearly here – and we’ve got another exciting rules preview to whet your appetite before your copy arrives next weekend (you have pre-ordered, haven’t you?).

Today, we’re looking at just how you ready your kill team for battle, and how you can advance your squad in campaigns. Kill Team features some new mechanics where your units aren’t fixed, but instead drawn from a pool of units that you can adjust for each of your games. In campaigns, meanwhile, you’ll be able to transform every model in your team into a storied veteran, hardened by countless battles…

Team selection is one of the most interesting parts of Kill Team, and a key tactical consideration to make when you’re playing. 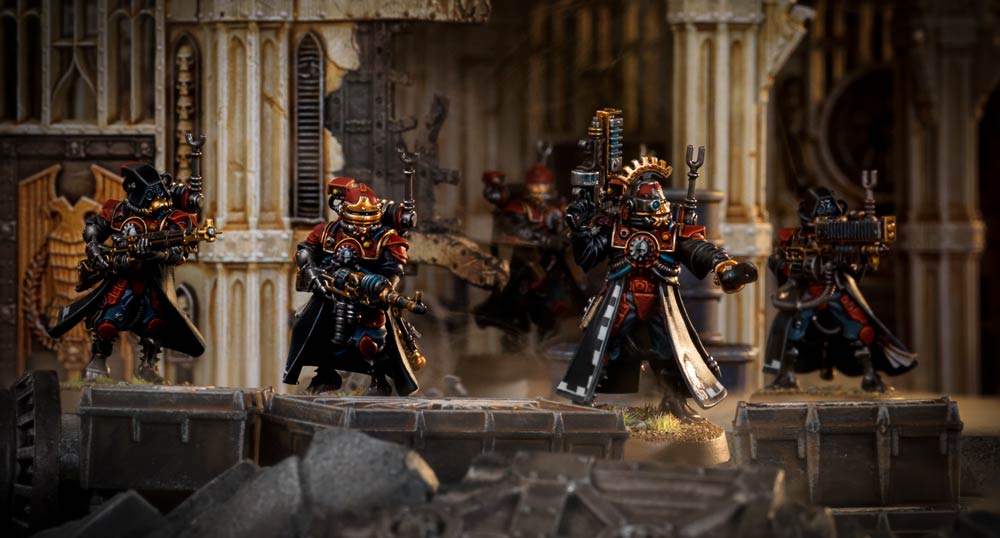 Rather than having a set roster you bring to all your games, your Kill Team can have up to 20 members ready to go at all times, with any number of specialists or leaders. 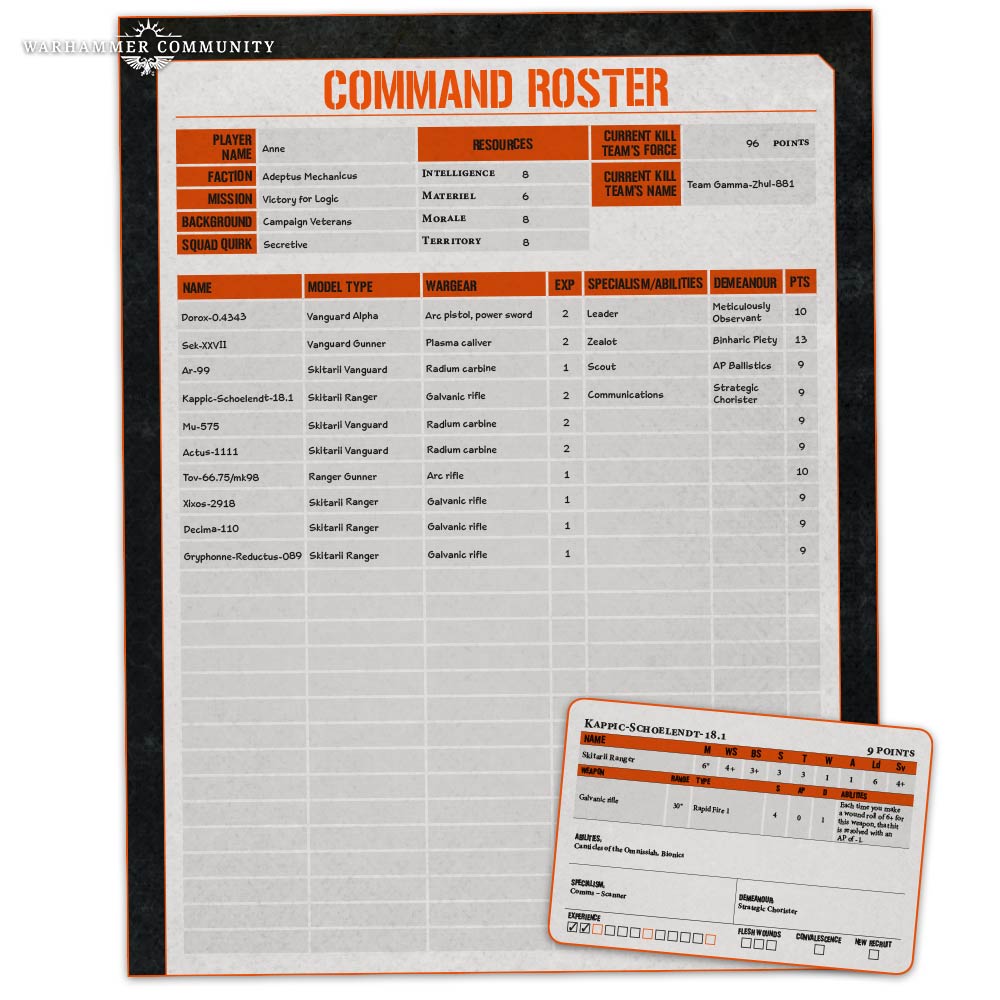 Where things get interesting is pre-game – once you know who you’re playing against, you’ll get to secretly pick which members of your team will be participating in the battle. You might want to keep a flamer-wielding demolitions specialist on your roster for dealing with lightly armoured kill teams, or a Zealot for those vulnerable to close combat.

Of course, there are restrictions – you can only have 3 specialists and one leader in each battle, and your total points can’t exceed 100. 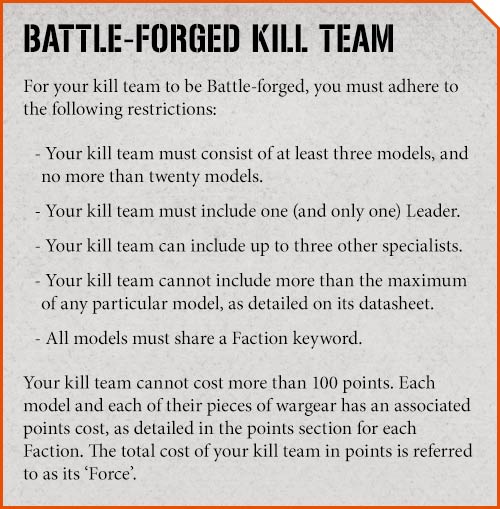 This adds a really interesting dynamic to your games where you’ll be trying to outwit your foe with your picks, while in a matched play event, you’ll theoretically be able to prepare for a wide range of foes rather than having any “bad” matchups.

When playing a campaign, choosing your kill team is crucial. Like in matched play, you’ll be choosing 100 points worth of models from your roster – in this case, representing all the troops you’ve used in the campaign so far.

With every game you play, your specialists will advance in skills, allowing you to transform each into a storied hero in their own right with a unique set of skills. Let’s take a look at the heavy specialism for an example: 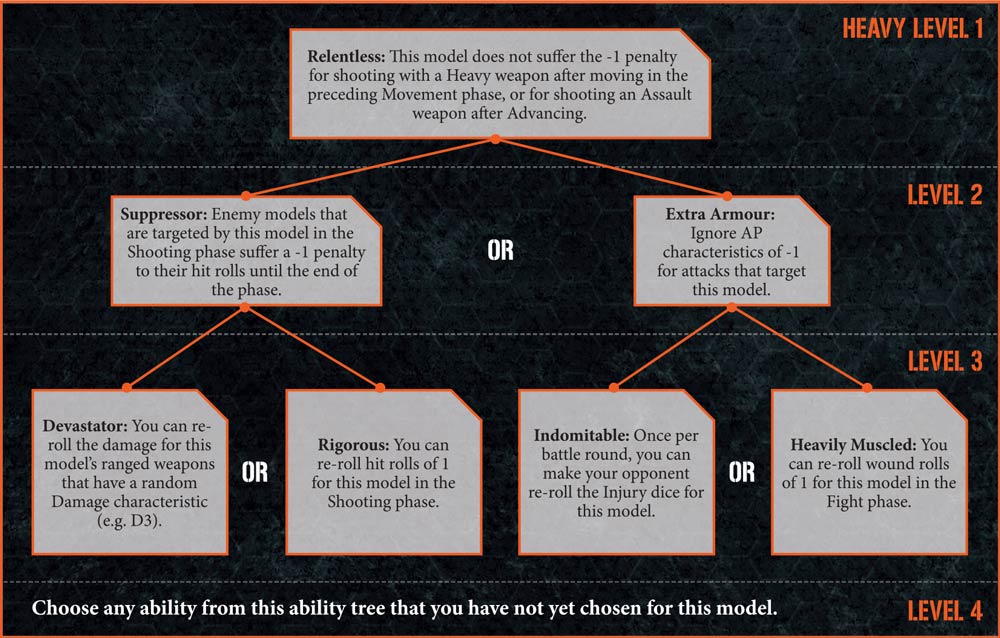 One heavy could be a careful trooper who excels at demolishing enemies at range – while another could be a rampaging, assault-weapon wielding juggernaut who’s equally comfortable battering people to death as he is shooting them. How you progress your specialists will shape your campaigns and give you a distinctive (and powerful) cast of characters to draw on for the next.

Specialists gain experience by participating in the battle and by using their unique Tactics, meaning even if they don’t participate directly in combat they’ll get more powerful. Similarly, when you’re playing a campaign, you’ll be rewarded for using a diverse range of tactics in your games – leading to a more exciting experience for both players. 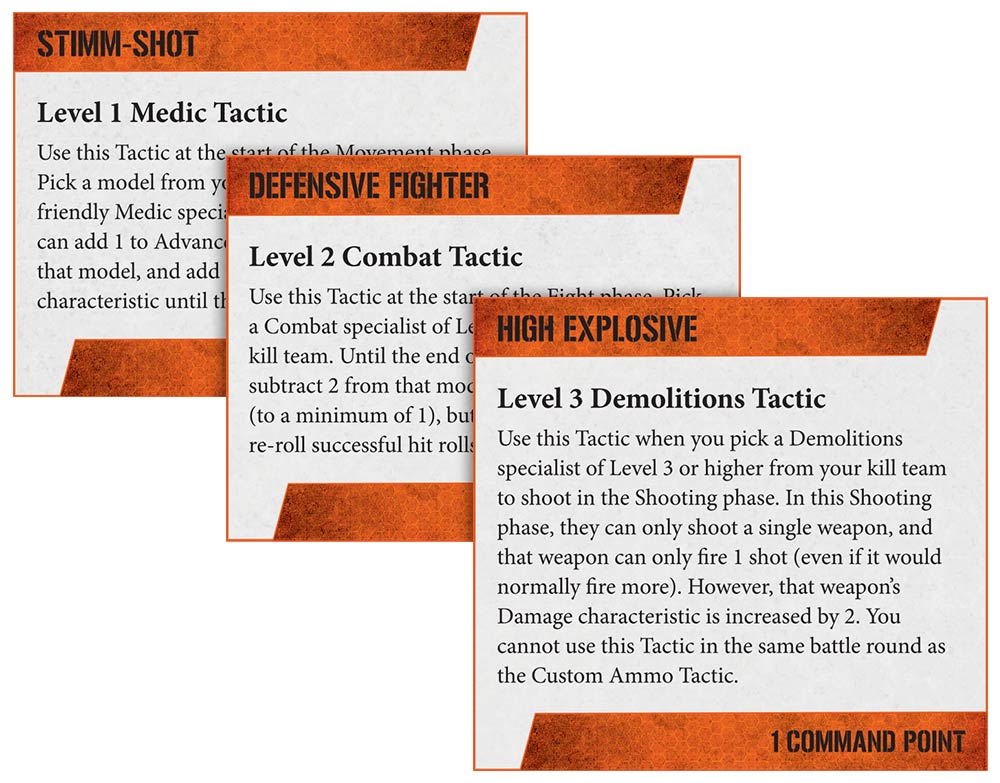 There’s one downside – specialists cost more points as they level up, meaning you’ll have to weigh up using a higher number of greener troops against sacrificing numbers for the more advanced skills of your veterans.

All non-specialists in your kill team are sorted into Fire Teams – groups of battle-hardened veterans who’ve forged bonds of comradeship over your campaign. While these guys might not be specialists, they have their own set of advancements and gain experience like the rest of your kill team. In fact, as long as at least two members of a Fire Team take part in a mission, they all benefit! Even if Fire Teams lose members, new recruits can be brought into the squad but must fight a battle with a more experienced member of the Fire Team before they can benefit from the team’s experience.

Tactically, this adds a really interesting consideration to how you build your kill team. While it might be tempting to stock up on multiple models from multiple datasheets, you’ll be rewarded for focus by being able to advance your non-specialists more easily.

In campaign play, you can add new members to your roster at any time – on the condition that you MUST use them in your next mission. This way, you can add new Leaders, specialists or models that wouldn’t fit into an existing fire team on your roster – the trick to winning a campaign will be maintaining a strong stable of experienced troops while consistently recruiting in order to provide more tactical choice. At the same time, if you lose your entire team to some heinous rolls, you’ll not have to worry about refreshing your ranks. 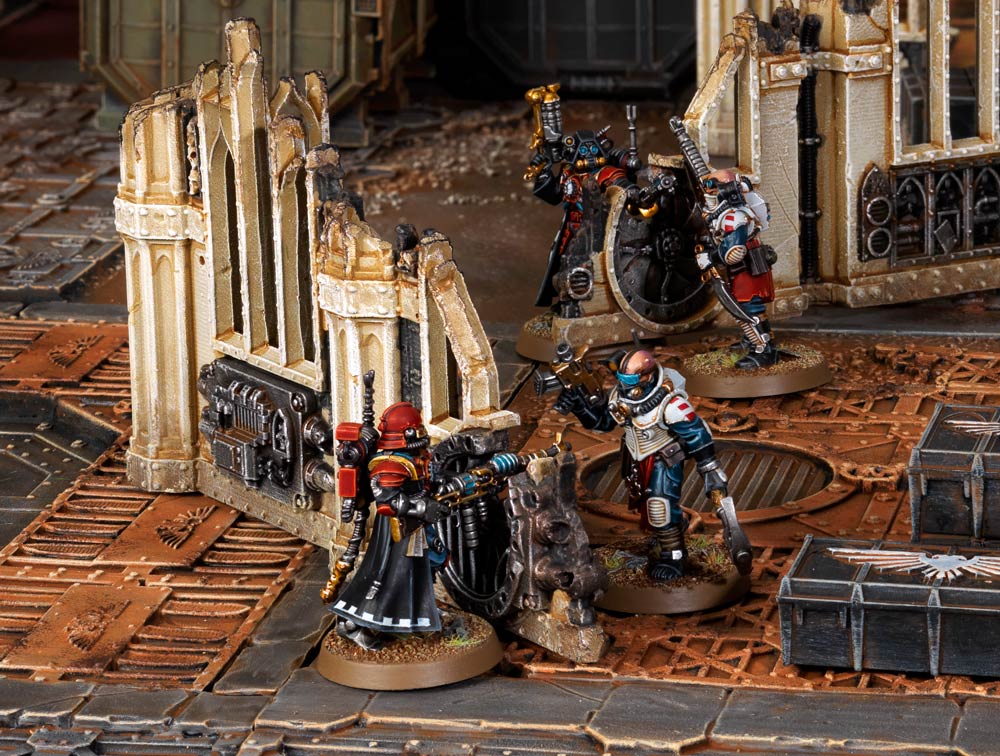 There’s a twist to all this, however, after the game, all models that were taken out of action must roll to see if they’ve survived their injuries, need extra time to recover, or are dead for good! 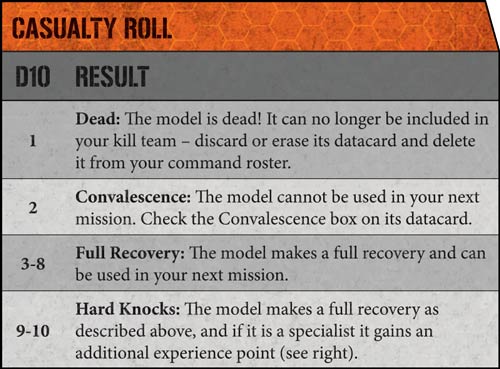 However, in a campaign, you can add new troops to your kill team at any time. No loss will be so crippling that it takes you out of the campaign for good or puts your roster at a permanent disadvantage against your opponents. Similarly, you can choose to automatically fail a mission and bug out on the third battle round. If things are looking rough and you don’t want to lose any beloved specialists, it could well be the right choice…

You won’t have to wait long at all until your building and advancing kill teams of your own – the game is available to pre-order right now and will be landing next weekend in a store near you! If you’re looking to get started, make sure to pre-order the Kill Team boxed set. 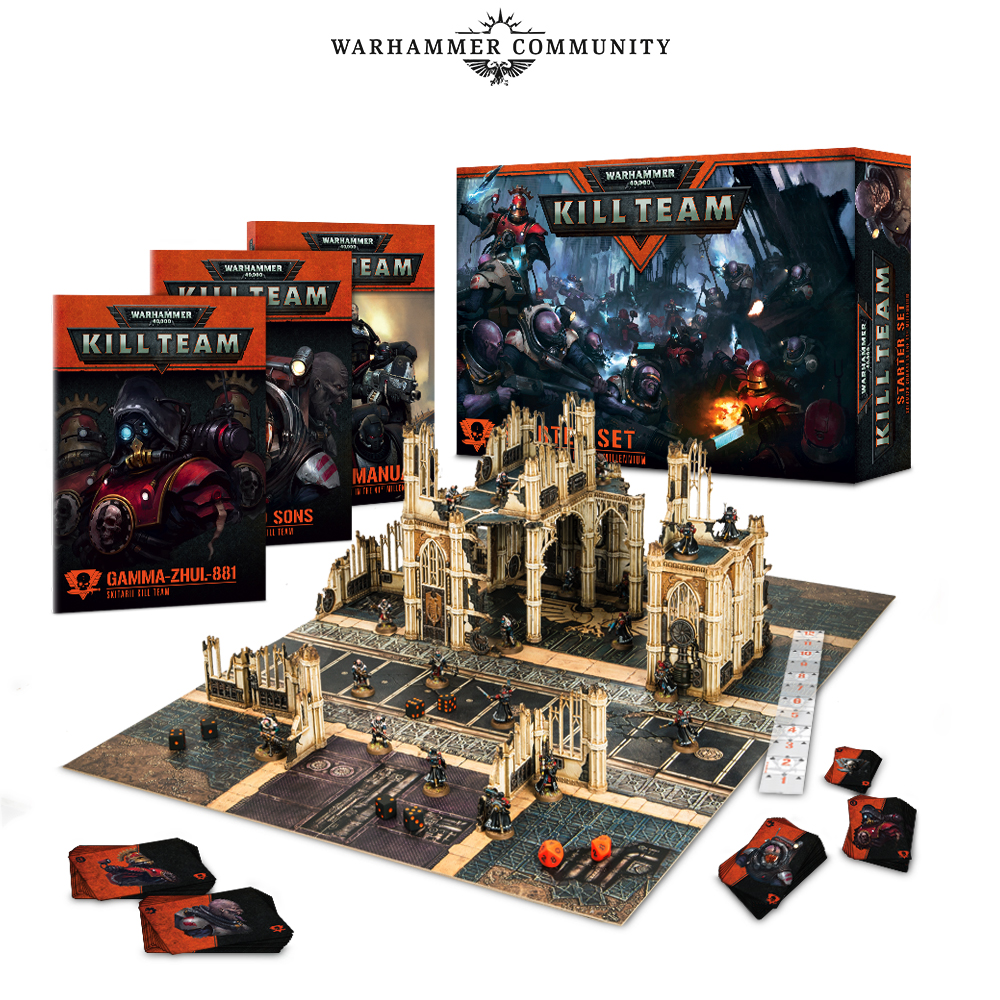 Take a sneak peek at the contents of October’s White Dwarf magazine.