Over the past week, we’ve been exploring the various factions that will be battling it out in the new edition of Kill Team.

But how does the game itself work?

In this article, we take a look under the hood at the core mechanics of the game… 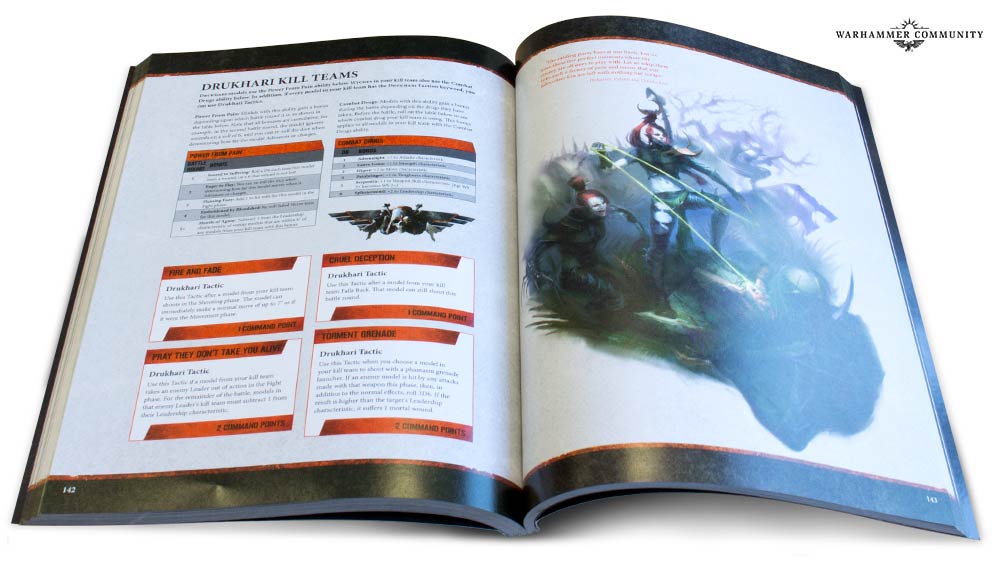 The Kill Team rules set shares a lot of DNA with its big brother Warhammer 40,000. Both are looking at combat in the 41st Millennium and share a lot of core systems and general principles, with differences emerging in scale. Warhammer 40,000 is about grand plans, sweeping manoeuvres and the clash of massive armies, while Kill Team is about moment-to-moment action. 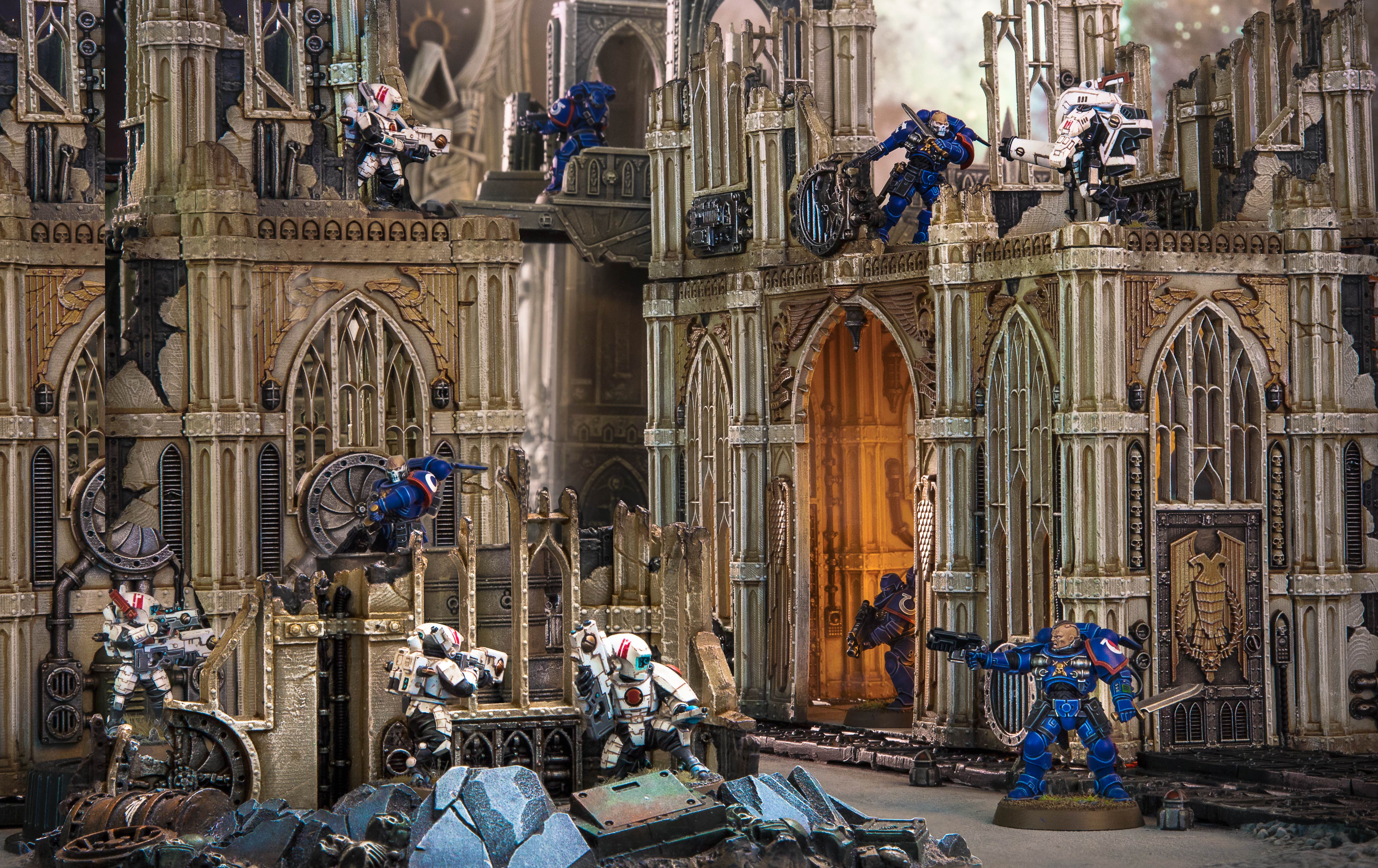 Put simply, in Warhammer 40,000, you’re a general commanding your army from on-high, while in Kill Team, you’re a sergeant, issuing orders to each member of your squad and trying to outmanoeuvre your rival.

A game of Kill Team lasts about half an hour to 40 minutes, making it easy to squeeze into a lunch break or get several games in across an evening.

In Kill Team, alternating activations for shooting and combat mean that you’ll have to be on-the-ball in every moment of the game – and you won’t have long to wait until it’s your turn, either.

There’s loads of tactical depth in Kill Team. With only a handful of models, every casualty hurts and every decision matters. 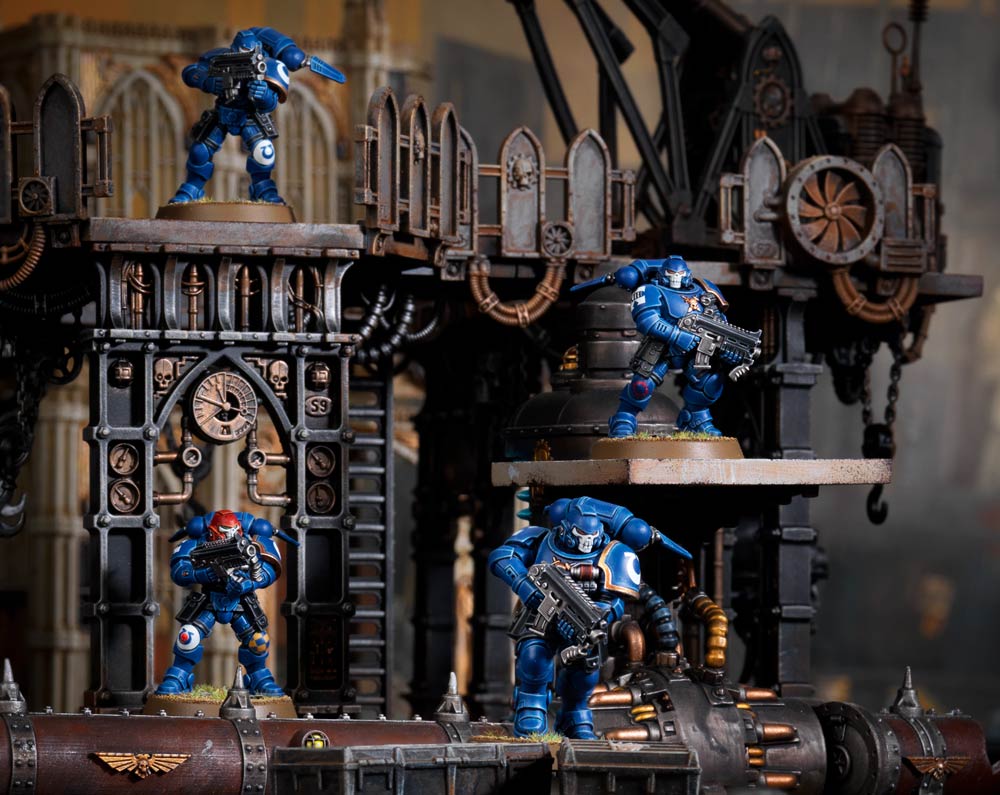 Every unit in Kill Team has a statline and a datasheet with characteristics, keywords and special abilities just like Warhammer 40,000. Let’s take a look at a Primaris Intercessor to demonstrate… 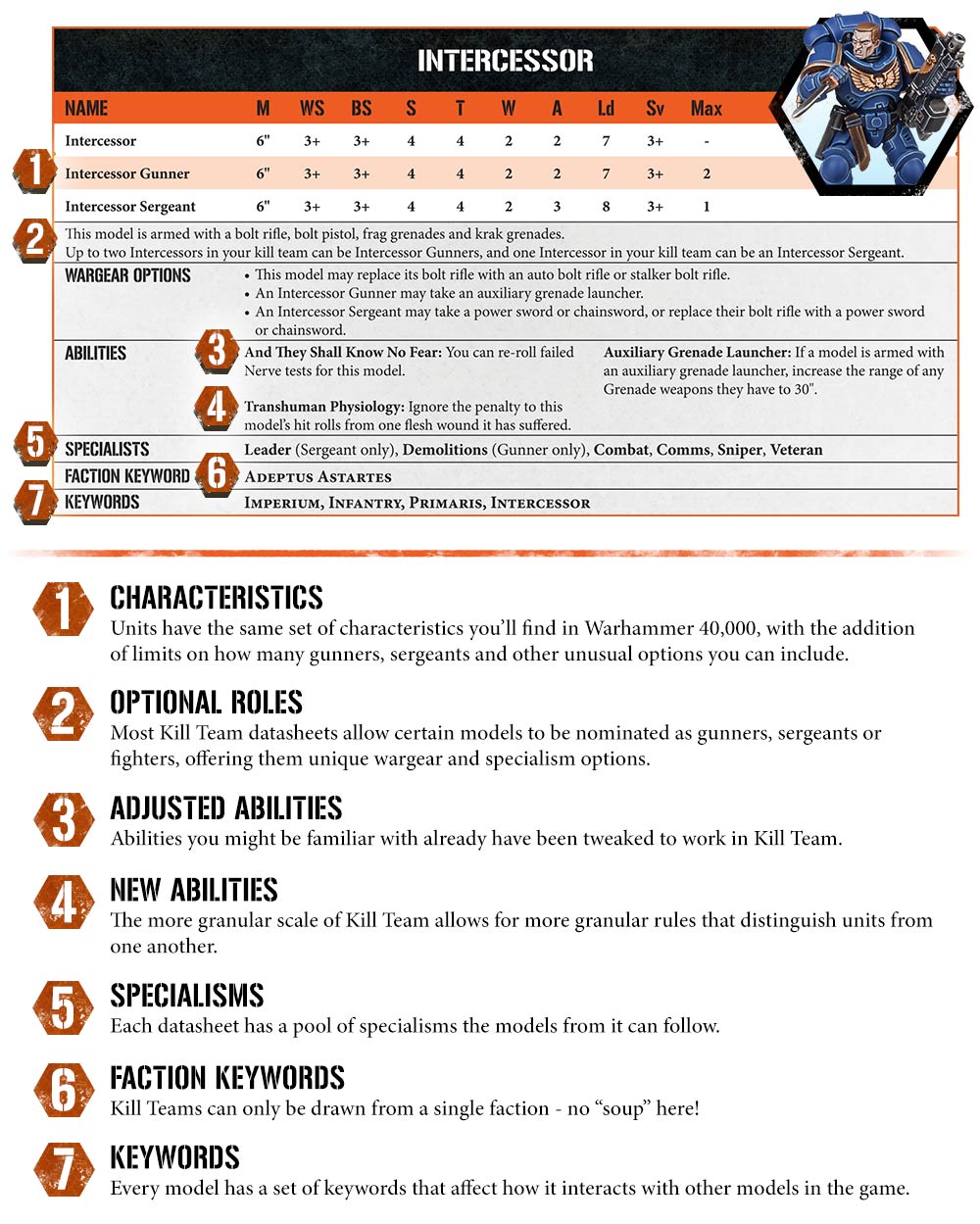 For the sake of speed, movement in Kill Team is handled on an I-go-you-go basis. After rolling off at the top of the turn, players take it in turns to move all their models – so far, not unlike Warhammer 40,000.

There’s more, however – in the movement phase, you’ll also get to charge! Even if you fail, you’ll get to move the full charge distance you roll, as long as you move towards the model you were charging in the first place. This adds an element of risk and reward – while you won’t get to move and charge, you will get to lock the foe in combat before they’ve had the chance to shoot at you.

Rather than moving, you can opt to “ready” units in the Movement phase. Doing so lets you shoot with them first in the coming Shooting phase. Likewise, if you Charge in the Movement phase, you’ll get priority in the Combat phase. As such, what you do in the Movement phase affects the rest of your turn significantly – playing well will revolve around knowing when to Ready, Move or Charge with your models.

Movement also features loads of interesting and detailed interactions with cover and terrain. Difficult terrain can slow movement, short gaps can be leapt over, and Killzones add all sorts of unusual terrain effects.

In Kill Team, the shooting and combat phases are tense, reactive affiar where players take it in turns to choose individual models to attack with. 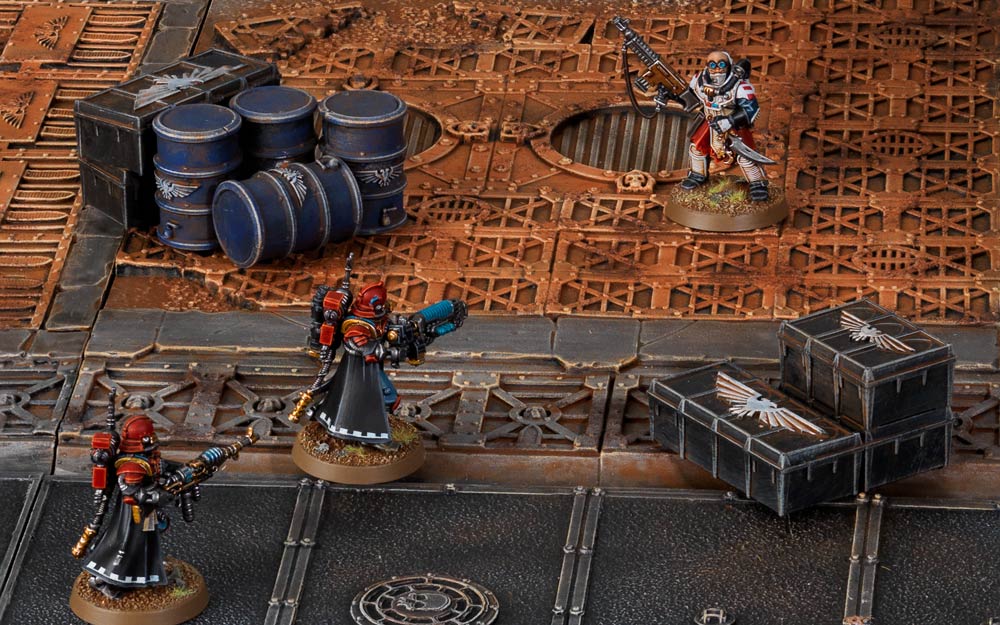 Shooting in Kill Team is a much riskier endeavour than in Warhammer 40,000 – if you’re looking to do some real damage, you’re going to have to stay mobile and try to flank your foes. Shots taken from ‘long range’ – that’s more than half a weapon’s maximum range – take a -1 penalty to hit, as do shots against targets that are obscured. A model is obscured if any part of it is blocked by cover. We’ll let one of the Skitarii from the starter set demonstrate: 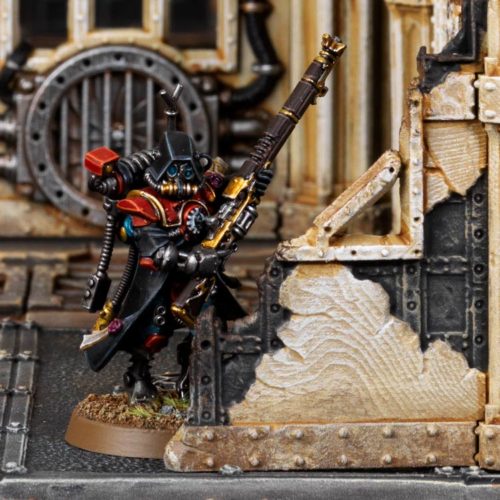 Bzzt! I am currently obscured. Shooting at me would be most inefficient. 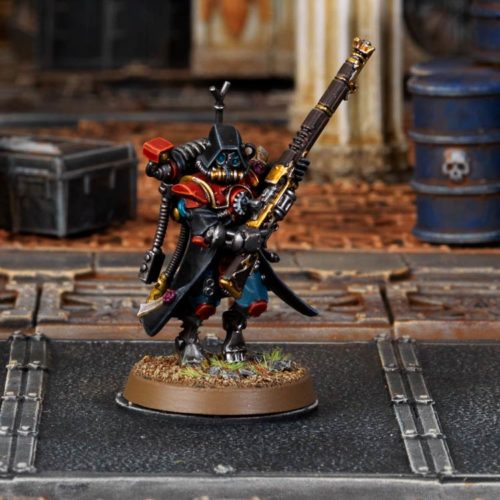 I am not obscured! Shoot at me at your leisure.

Thanks, Skitarii! In practice, this means that it’s usually pretty hard to hit people – and so playing a shooting kill team will mean playing a mobile, responsive game as much as a melee-focused kill team will.

Worry not, Orks – an unmodified hit roll of a 6 is always a hit, regardless of cover, stealth fields, camo cloaks or what have you – so you’ll be able to solve any deficiencies in accuracy with maximum dakka. Or just Burnas.

In Kill Team, death is not the end! In the wide ranging, top-down world of Warhammer 40,000, a battlefield casualty can represent anything from a crippling injury to being turned into a fine vapour by a volcano cannon. In the ground-level skirmishes of Kill Team, injuries have a bit more granularity and are broken down into non-lethal Flesh Wounds and models being Taken Out of Action. 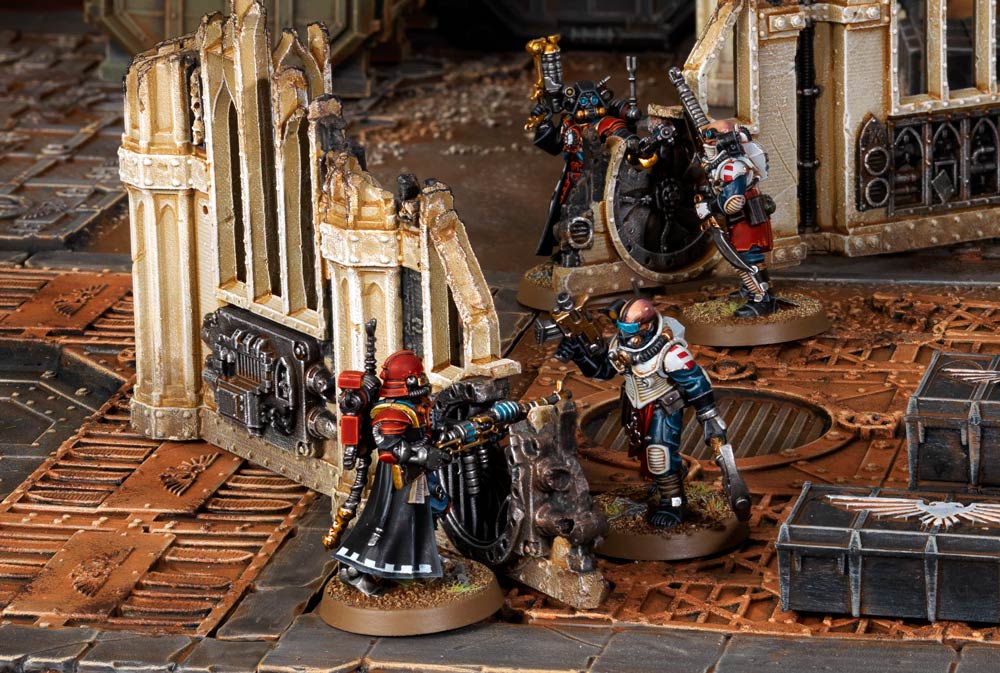 Here’s how it works. When you attack, you’ll roll to hit, to wound, and to save much as you would in Warhammer 40,000. If you remove a model’s last wound – well, that’s where things get tense!

Rather than removing the model, the controlling player makes an injury roll. On a 3 or less, you’ve suffered a Flesh Wound and can keep fighting. On a 4+, you’re out of action!

If a target is obscured, you subtract one from the roll, while if they’re already injured, you add one for every Flesh Wound they’ve suffered. Attacks with a damage characteristic larger than 1 will also cause multiple injuries – after all, getting hit with a lascannon stings a lot more than getting shot with a stubber.

Morale in Kill Team is one of the tensest phases of the game – play your cards right, and you can use morale to defeat a enemy without ever having to directly battle their most deadly fighters. Fail to prepare, and you could end up with your own team unable to act as they become riven with fear… 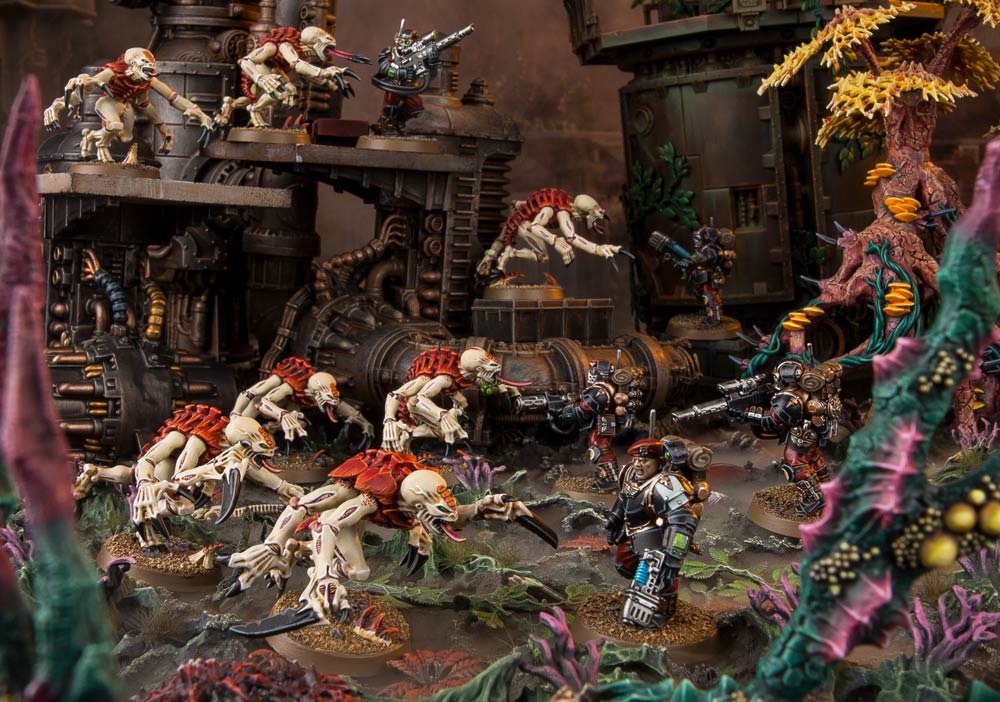 Morale is split into two components, representing the morale of the kill team as a whole and the individual bravery of each member of the squad. Lose more than half your squad, and there’s a chance your kill team will become broken, applying penalties to hit to all your models, while models with Flesh Wounds risk losing their nerve and becoming shaken, preventing them from acting for a whole turn.

When building your kill team, you’ll want to make sure that you grab a high-leadership model to help insulate your kill team against morale, as well as some support specialists like Medics and Comms – after all, having a killer kill team isn’t worth much when they’re all in a panic…

We stopped by the studio and had a quick chat with Wade Pryce – who spends his days planning Warhammer 40,000 publications out of Chaos and into reality – about how Kill Team came to be:

Thanks, Wade! You’ll be able to pre-order your copy of Kill Team on the 21st of July.

And that’s the basics – although there’s plenty more to discover, like Tactics, the Scouting phase, Killzones, special missions, and, we daresay, more expansions further down the line. If you’re looking for how your Kill Team will play specifically, check the Faction Focus Index for more.

Pestilence descends next weekend as the new and improved Death Guard arrive for pre-order.

Lord over your opponents with this brand new HQ choice for the forces of Nurgle.

What’s all this? Why is it now Issue 450? And is White Dwarf still the Ultimate Warhammer Magazine now that …