The Mortal Realms’ myriad oceans are dangerous places. Soul-hunting aelves lurk beneath the waves, while piratical ne’er-do-wells raid coastal towns and merchant ships. If this sounds like a jolly good time then you’re in luck, as next week’s pre-orders are of a decidedly nautical nature.

That’s not to say that the sea is the only place getting some action. The skies of the 41st Millennium are darkened by an ancient, sickle-shaped menace, while the pitches of Blood Bowl start to look a little worse for wear. Let’s kick things off with a jaunt to the imperilled magmahold of Ryftmar in the Realm of Fire.

Given the many terrors that crawl from Aqshy’s depths, it takes a brave soul indeed to set up home within spitting distance of the coast. Luckily Fyreslayers have no shortage of mettle, and they’ll need every ounce of it to fend off an Idoneth Deepkin assault in Warhammer Age of Sigmar: Fury of the Deep. 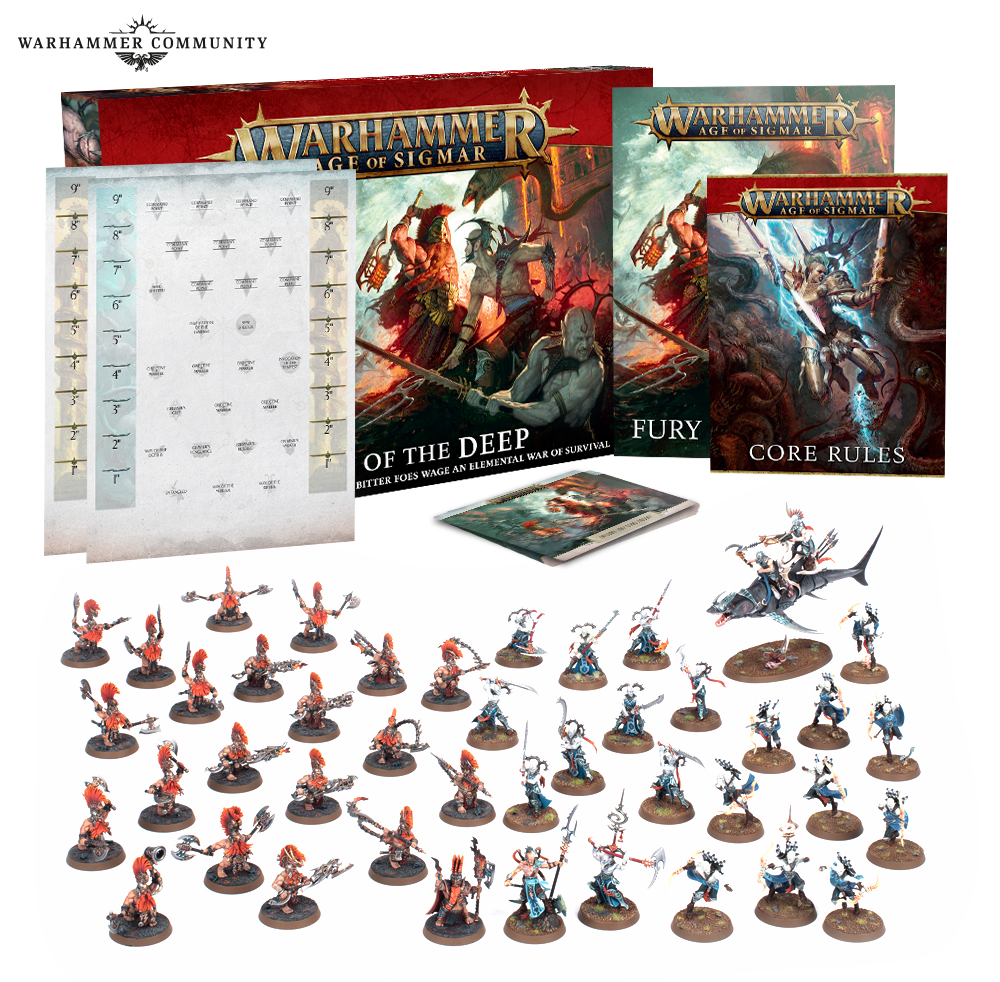 Two mighty hosts of warriors clash amidst the acidic waves of the Vitriol Sea, each led by a brand new miniature. The Auric Flamekeeper draws strength from his fallen comrades to bolster nearby allies, while the Akhelian Thrallmaster corrals his soulless Namarti troops and spurs them onwards to greater heights of violence. Keep your eye on Warhammer Community over the next week to learn more about both of these formidable characters. 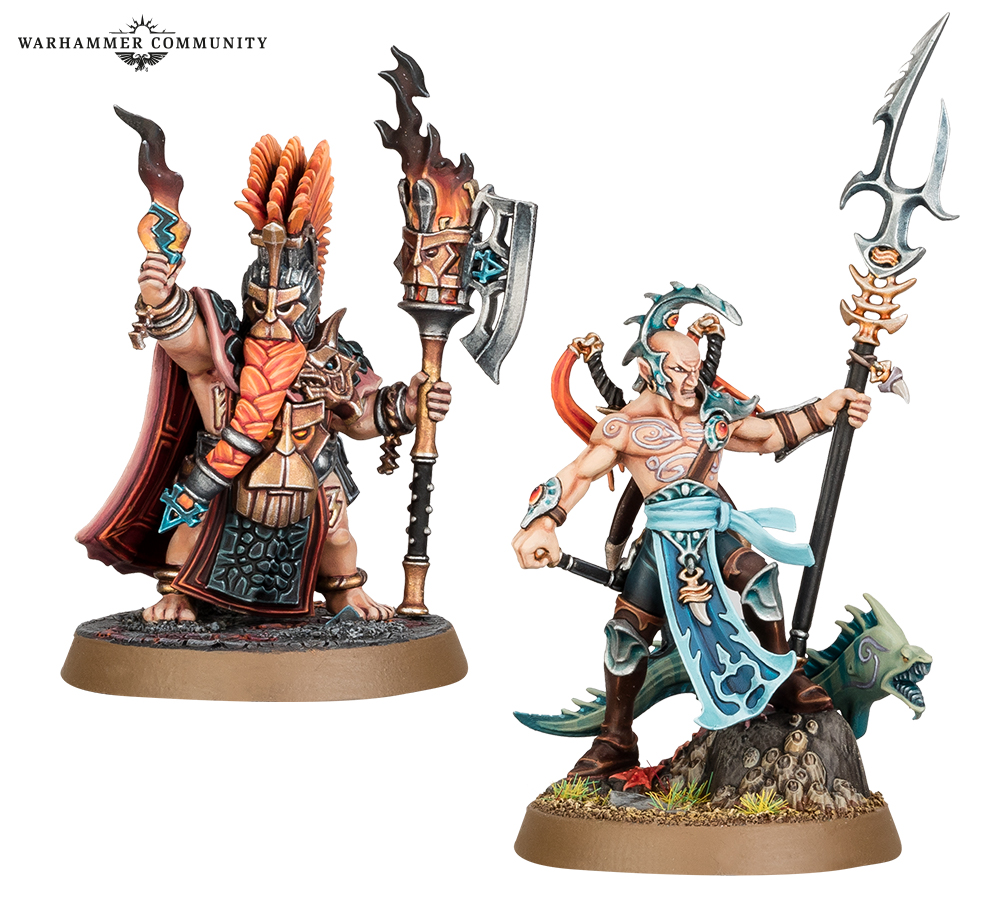 Fury of the Deep also includes a 40-page booklet delving into the history of Aqshy, its aelven and duardin denizens, and the strife that continues to erupt despite an ostensible alliance between the forces of Order. The box contains 43 miniatures, a token sheet, and nine warscroll cards, as well as a 56-page Warhammer Age of Sigmar Core Rules book, all of which make it the perfect place to start a new Warhammer Age of Sigmar army (or two).

Meanwhile, beneath the churning swell of Ulgu’s Penumbral Sea, Gorlok Blackpowder and his motley crew search for treasures and fresh victims in the maze-like depths of Harrowdeep. Dragged beneath the waves by a predatory whirlpool, the ogor pirate swiftly discovered the potential of the labyrinth’s seemingly infinite passages, and set about plundering everything he could reach. 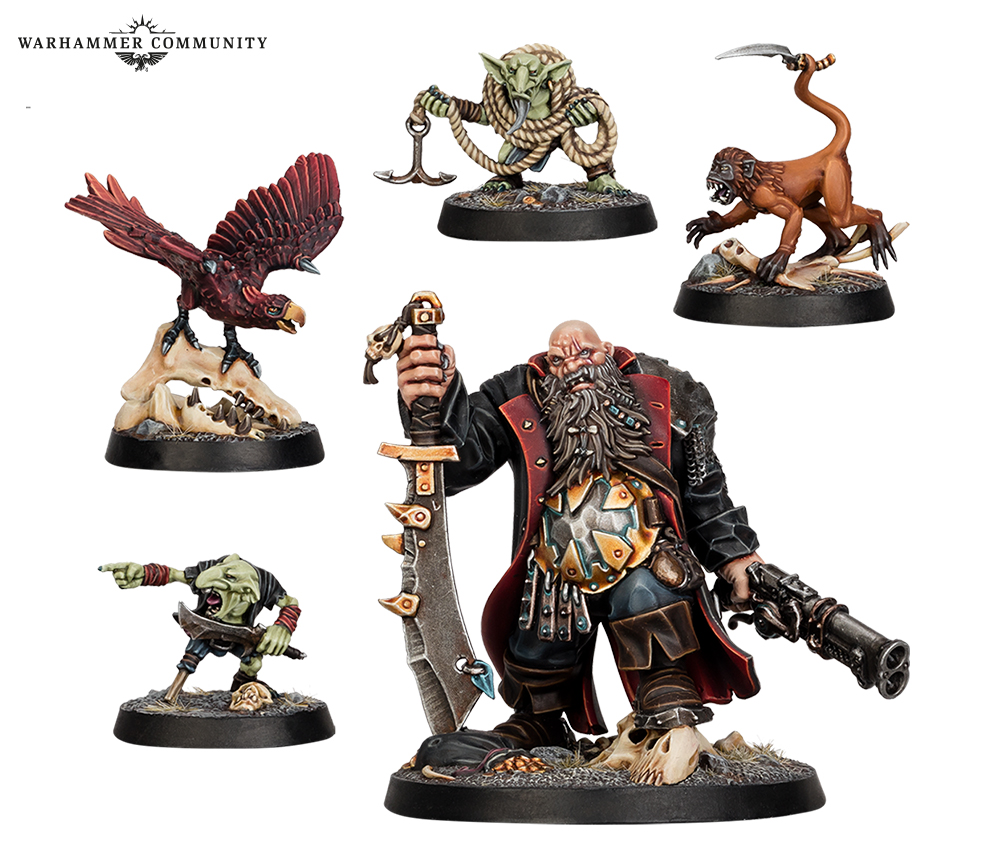 Joined by his two gnoblar minions, trusty parrot Shreek, and a monkey that someone made the mistake of giving a knife to, Blackpowder is an aggressive fighter able to knock out foes from afar with his massive grunderbuss.

As well as a new warband, the latest deck for Warhammer Underworlds’ new Rivals format joins the fray. Rivals decks are ready-to-play selections of cards designed to get you into the Underworlds action as quickly and easily as possible, and Illusory Might gives your warband 32 brand new cards to shake up their strategies. The Illusory Might deck can be used with whichever Warband you fancy, meaning you can introduce entirely new play styles to your favourite miniatures. 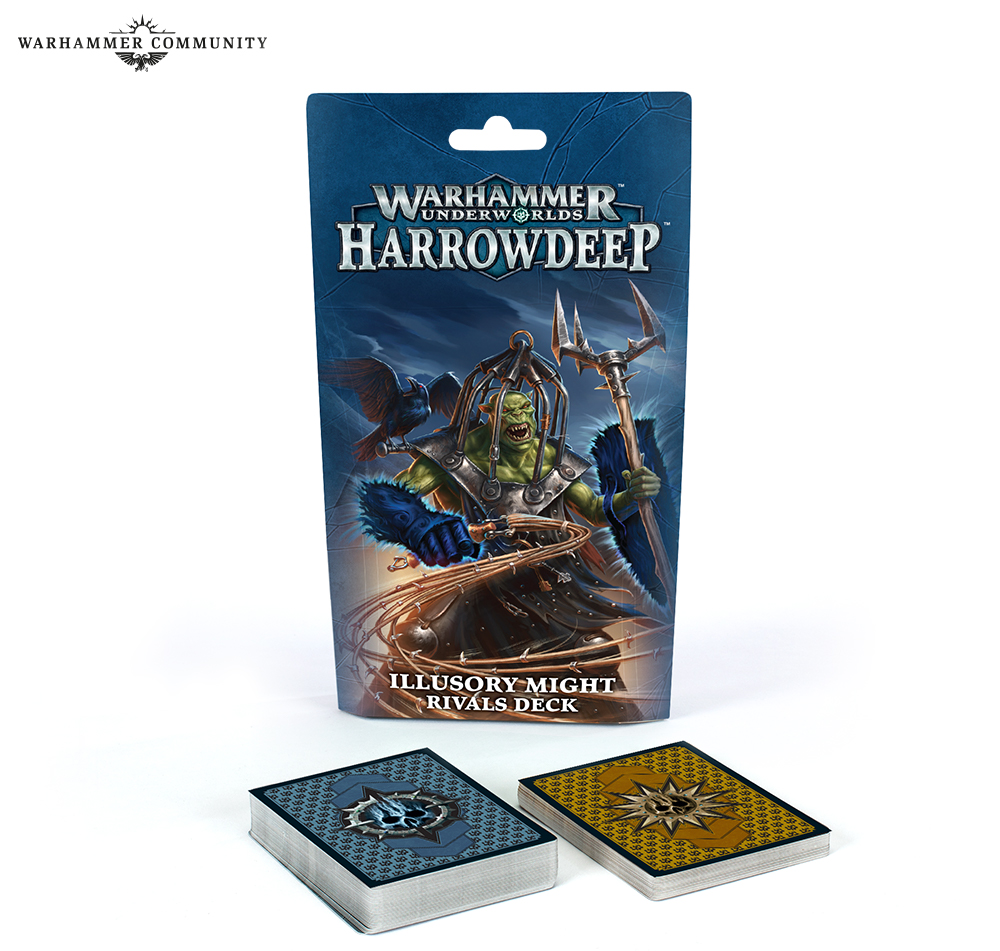 Fans of deck-building can still use all of these cards for any of their existing warbands, taking advantage of Harrowdeep’s new Illusion and Grievous mechanics to add exciting new twists.

The dubious blessings of Grandfather Nurgle come to Blood Bowl, twisting the pitch into a festering garden of pestilence. One side hints at the simmering infestation below the surface, while the other blooms into a full-blown plague garden complete with toothy growths erupting from the sod. 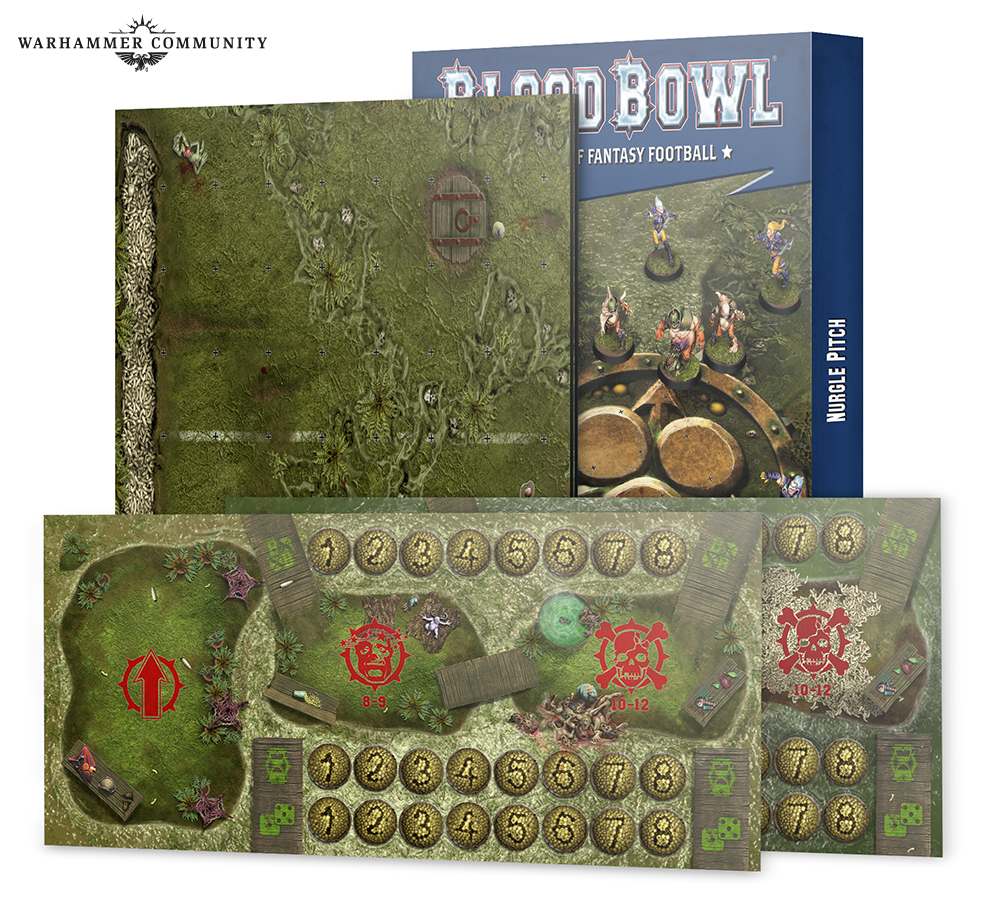 Those teams who feel right at home amidst the contagion will be glad to know a pack of Team Cards will soon be on hand to reference during the game, including their available Star Players and Special Plays. Complete the set with a pack of Nurgle-themed dice, finished in an appropriately sickly green colour with orange inlaid details. With any luck, they’ll attract the notice of the Plague God himself, who might bequeath some luck upon his favoured coaches. 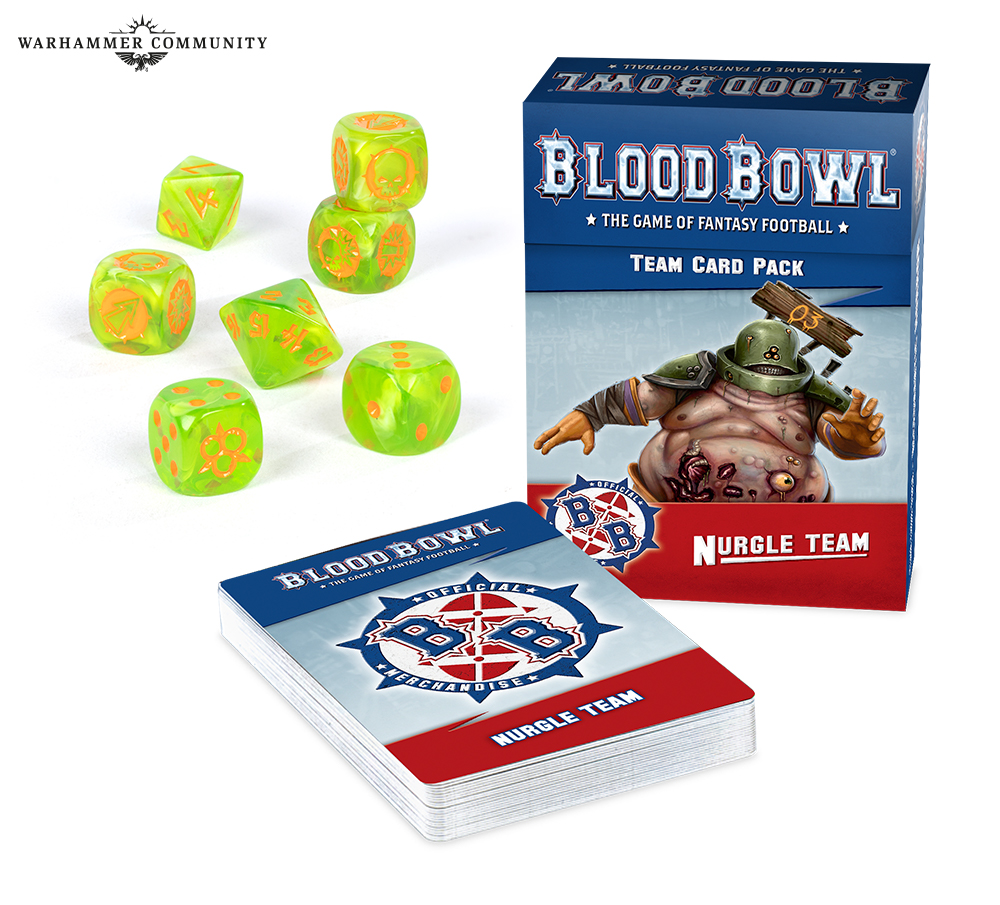 The perfect addition to your games of airborne combat in the 41st Millennium is here in the form of Aeronautica Imperialis – Companion. This expansion collects new rules, aircraft, and factions, along with existing content previously found within White Dwarf magazine, allowing you to field squadrons from the Necrons, Asuryani, and Adeptus Astartes. 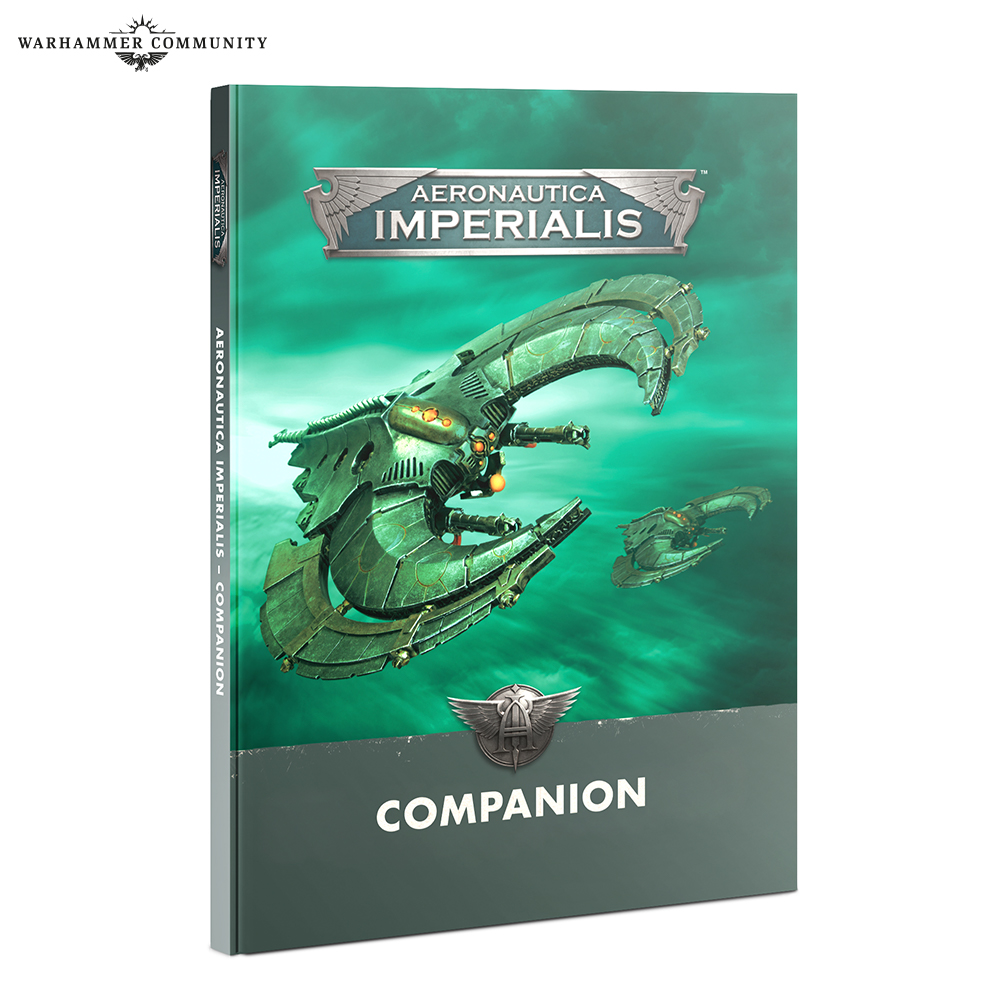 Experience a deeper dogfighting experience with detailed expanded damage rules, new Ace abilities, and the challenges of limited ammunition. Novice and experienced commanders alike can use these rules to revolutionise their Aeronautica Imperialis games across a suite of new matched play scenarios.

And, just in time for the Companion, deadly aircraft from the Necrons’ air armadas swoop down from Forge World to pit millennia of airborne expertise against the galaxy’s upstart pilots. 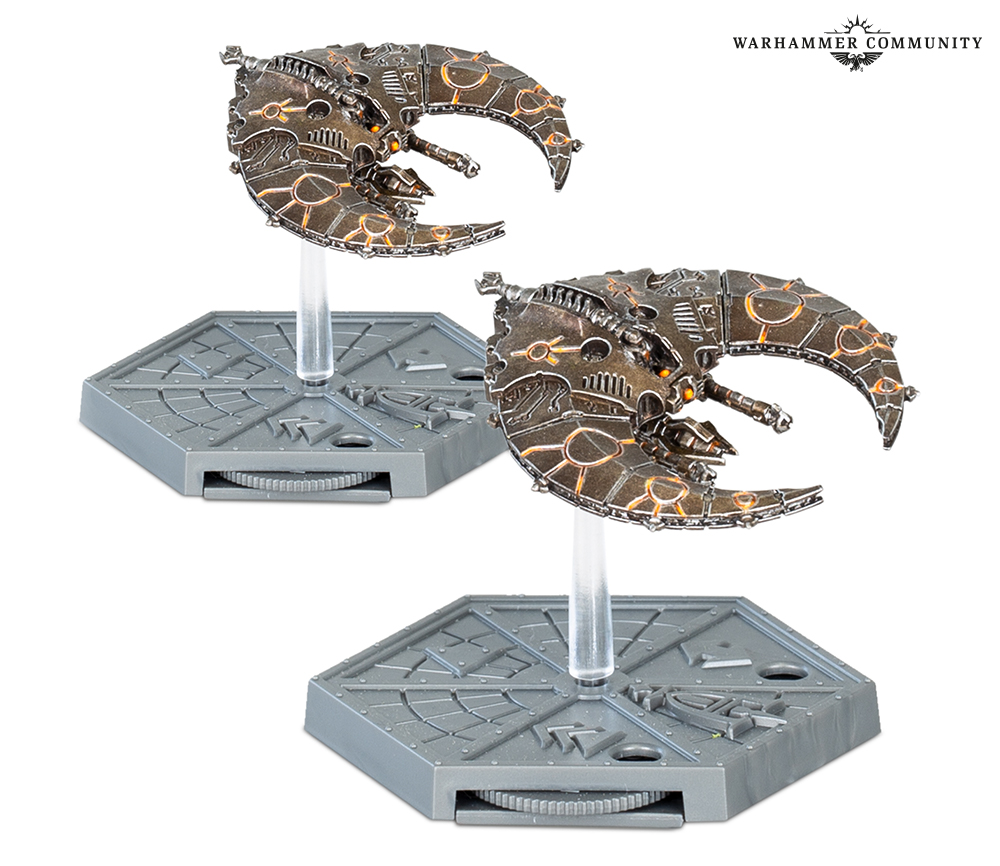 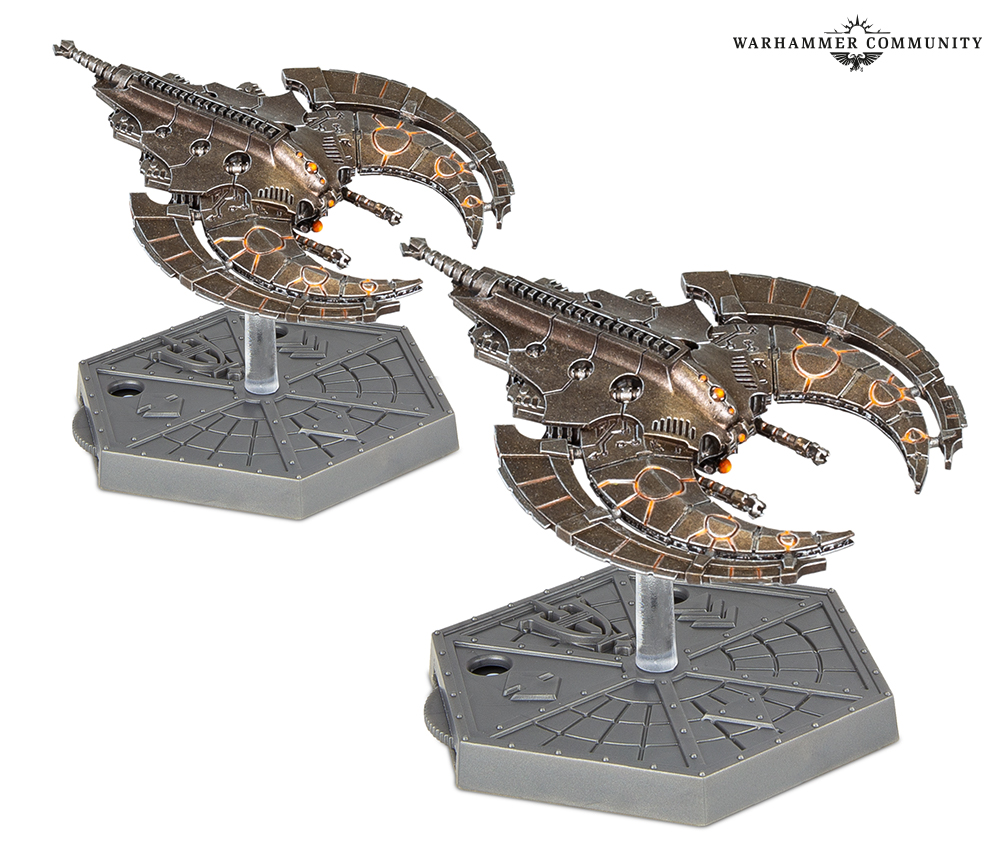 Each set contains two planes buildable as either Night Shroud bombers or Doom Scythe fighters. The former possess speed and manoeuvrability akin to the fighters of lesser races, dropping deadly doom spheres with unerring accuracy, while the latter shred rival interceptors with a powerful death ray.

Issue 472 of White Dwarf magazine* unveils the grand finale of A Tale of Four Warlords, with the armies revealed in all their glory. Meanwhile, rules for Genestealer Cults Kill Teams break cover to overthrow the Imperium, and a war of faith brews in the latest Flashpoint, set in the critical Nachmund Gauntlet. 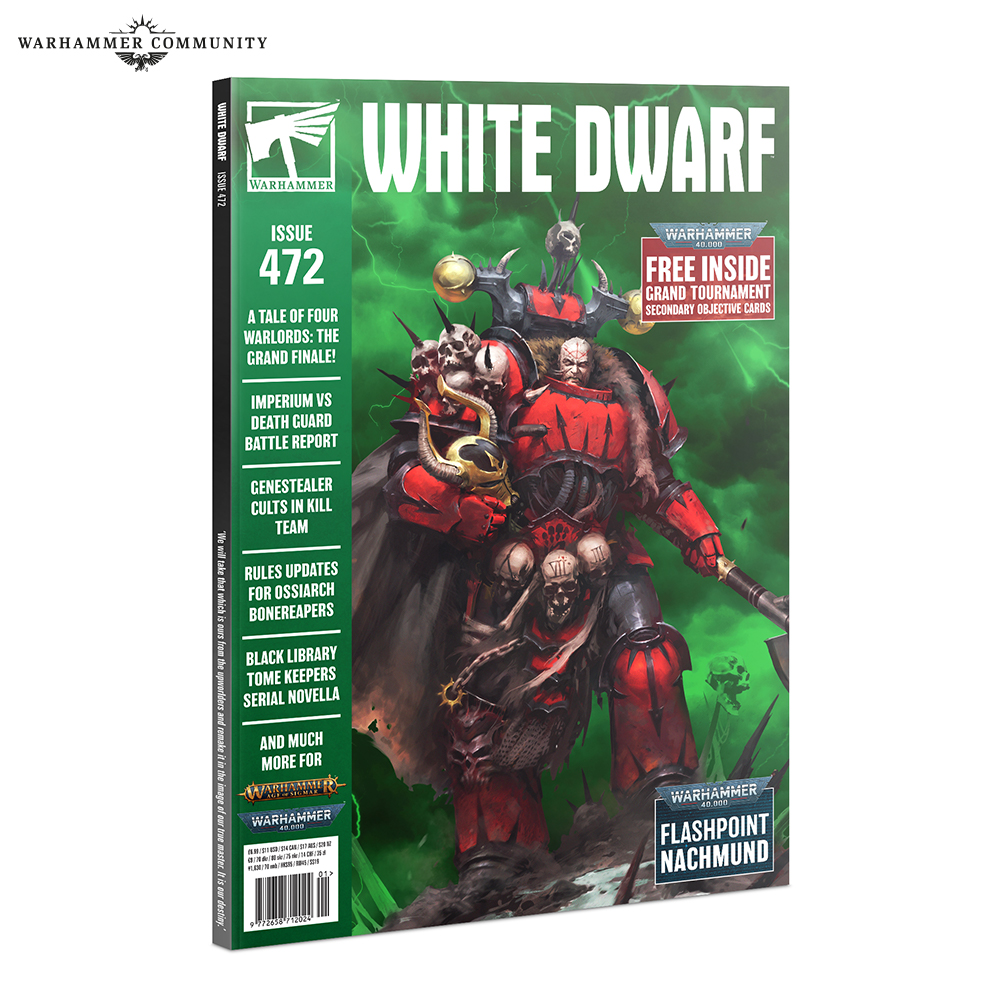 In the Mortal Realms, this issue’s Tome Celestial sheds its light on the Ossiarch Bonereapers, granting new and updated rules to the dutiful legions of Death. Take your revitalised forces on a new campaign, but beware – they’ll need to reap a tally of bones if they’re to keep on the march.

Journey to the depths of Harrowdeep with a collection of three novellas by Gary Kloster, Noah Van Nguyen, and David Annandale. A questing band of Stormcast-errant, pirate captains vying for power, and two priests on the hunt for a potent weapon have all been ensnared by the mysterious labyrinth, and to survive they’ll have to battle against their fraying sanity – as well as the horrors of Harrowdeep. 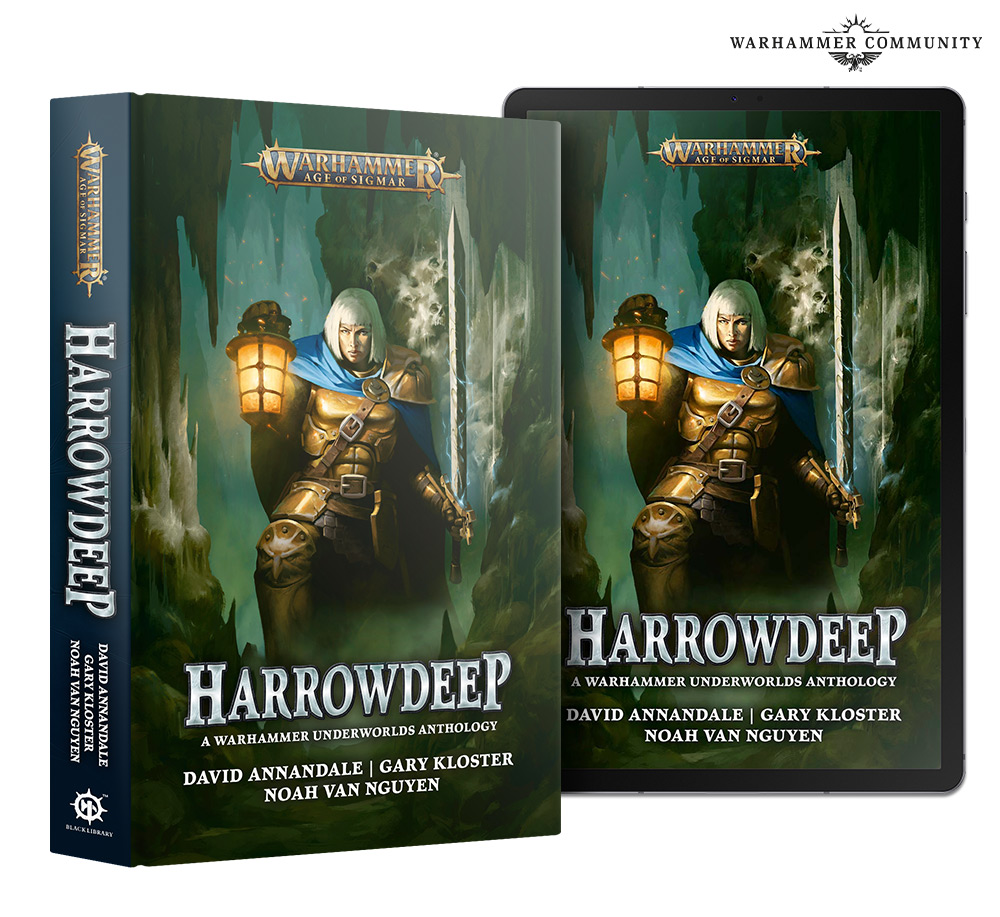 A powerful Alarith Stonemage must battle with his roiling emotions in The End of Enlightenment, as a quest from Teclis himself sends the Lumineth Realm-lords into battle with one of Nagash’s most trusted Ossiarch generals. 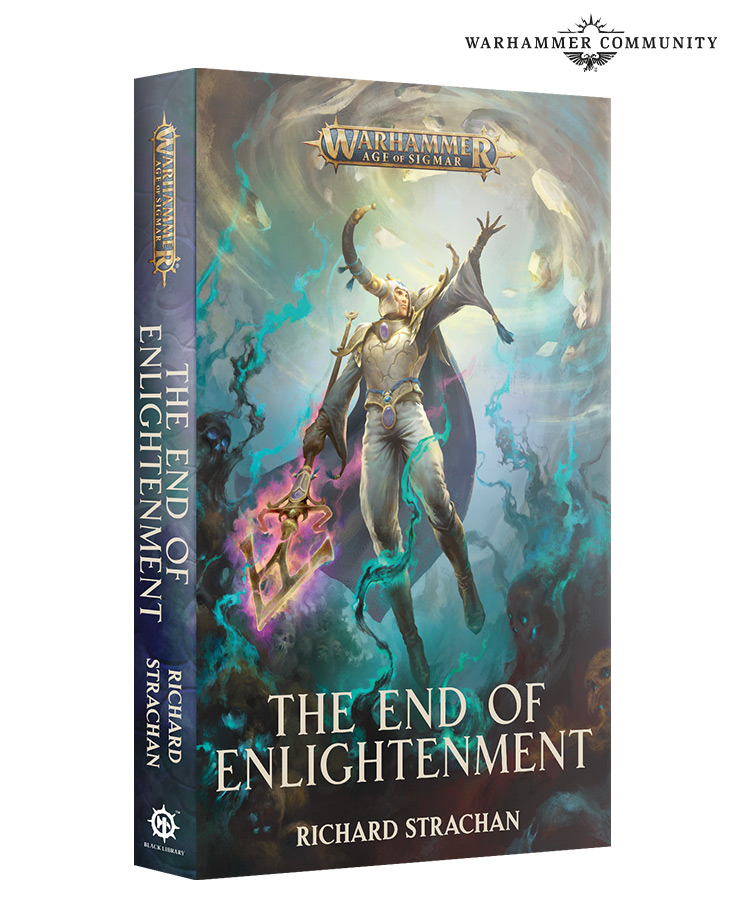 This new paperback edition tells one of the Lumineth’s earliest tales amidst the storm of Teclis’ war against the forces of Death.

Warhammer+ continues its journey into 2022 with the year’s first new episode of Hammer and Bolter, featuring the indomitable defenders of Cadia. Then, Loremasters delves into the mystical history of realmstone, one of the key sources of arcane power that drives conflict in Warhammer Age of Sigmar. 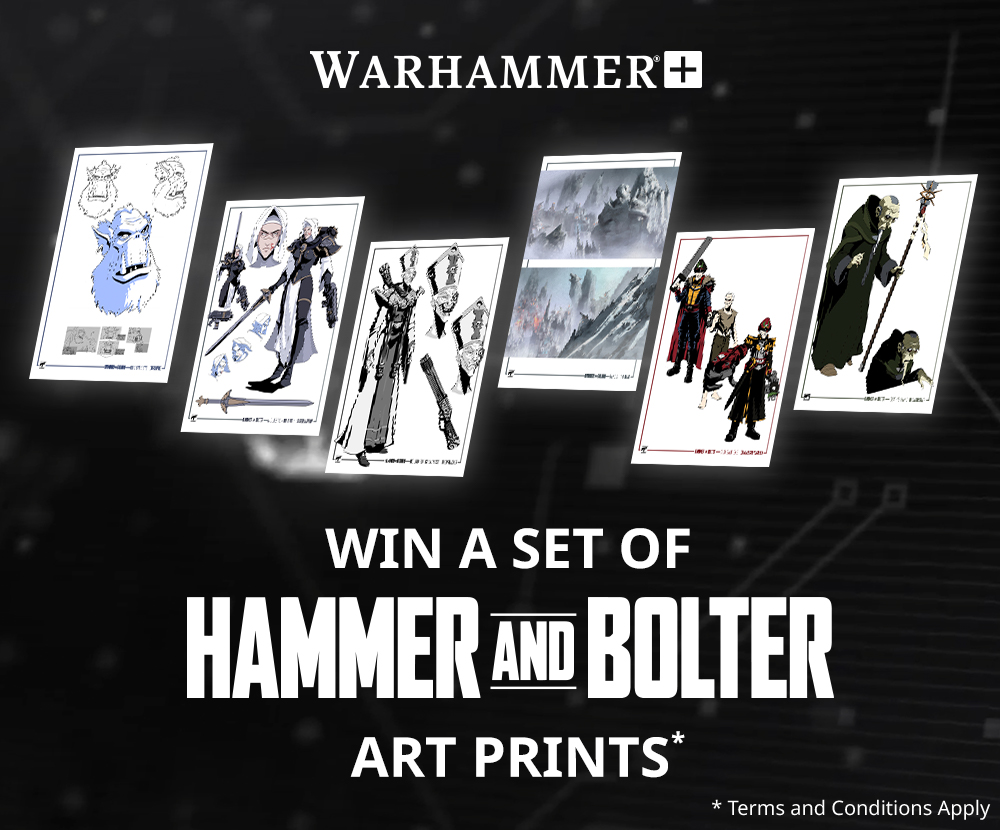 Want to own a piece of Warhammer history? This set of six beautiful concept art prints showcasing never-before-seen artwork from the development of five Hammer and Bolter episodes are the prize for this exclusive competition, and all you have to do to be in with a chance of winning is sign up before the 31st of January.** Only 20 of these rare art print sets exist, so get your chance to win – as well as access to all the phenomenal content available – by making sure you’re a Warhammer+ member this month. If you’re already a subscriber, know no fear – you’ll be entered into the prize draw automatically. 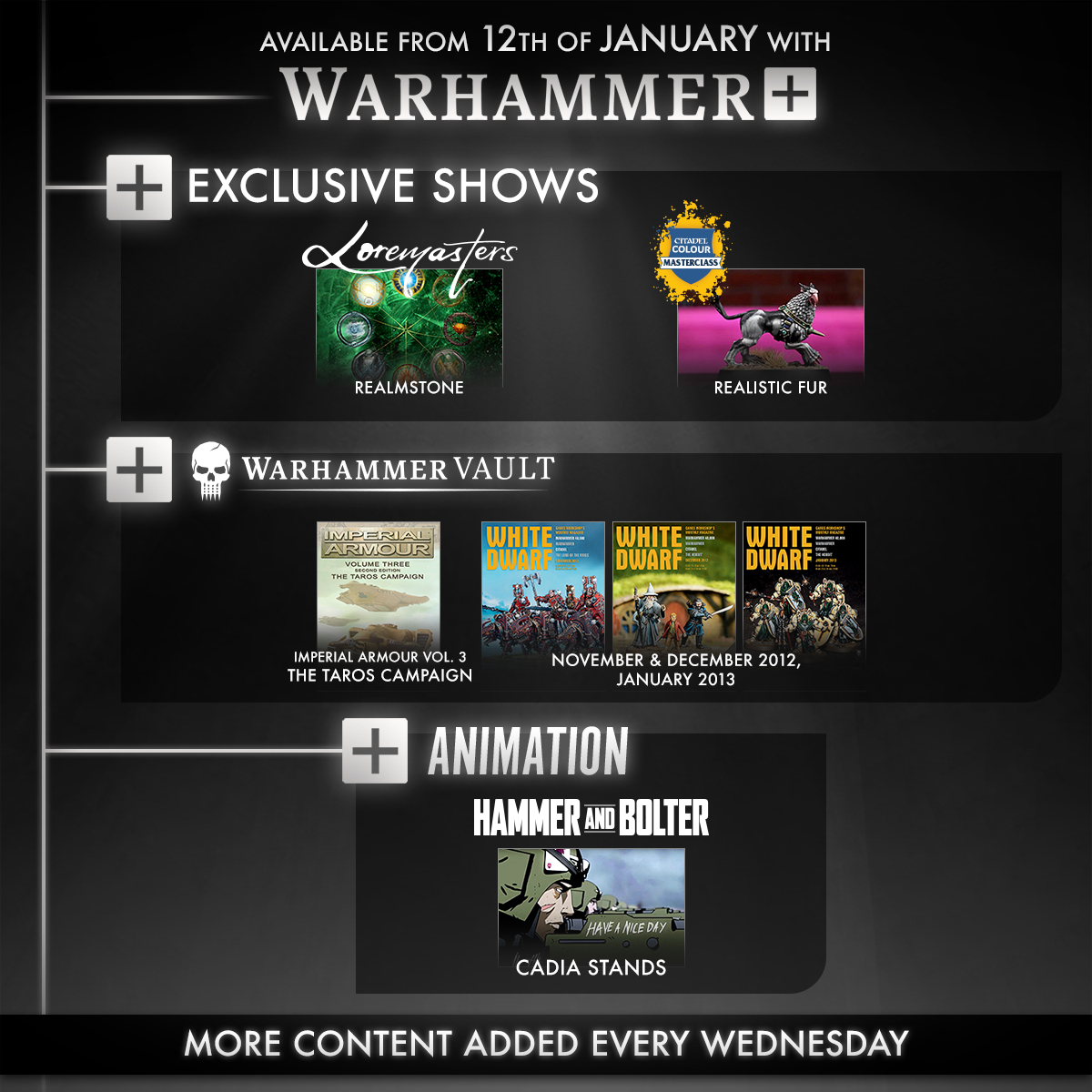 You can also get ready for the upcoming Codex: T’au Empire with a look into one of their finest military victories in Imperial Armour: The Taros Campaign, added to the Warhammer Vault alongside three more issues of White Dwarf magazine.

This Week from Warhammer Community

As usual, Warhammer Community will be bringing you a  bumper New Model Monday, and those intimidated by the T’au Empire’s new and improved railgun might want to have a sit down before finding out what their latest big gun looks like later in the week.

Warhammer TV is back after its holiday hiatus with all of your favourite weekday hobby shows. If you’ve been aching to Hang Out and Hobby over the Christmas holidays, we’re right there with you, and there’s plenty to cover from around the Warhammer community this week. 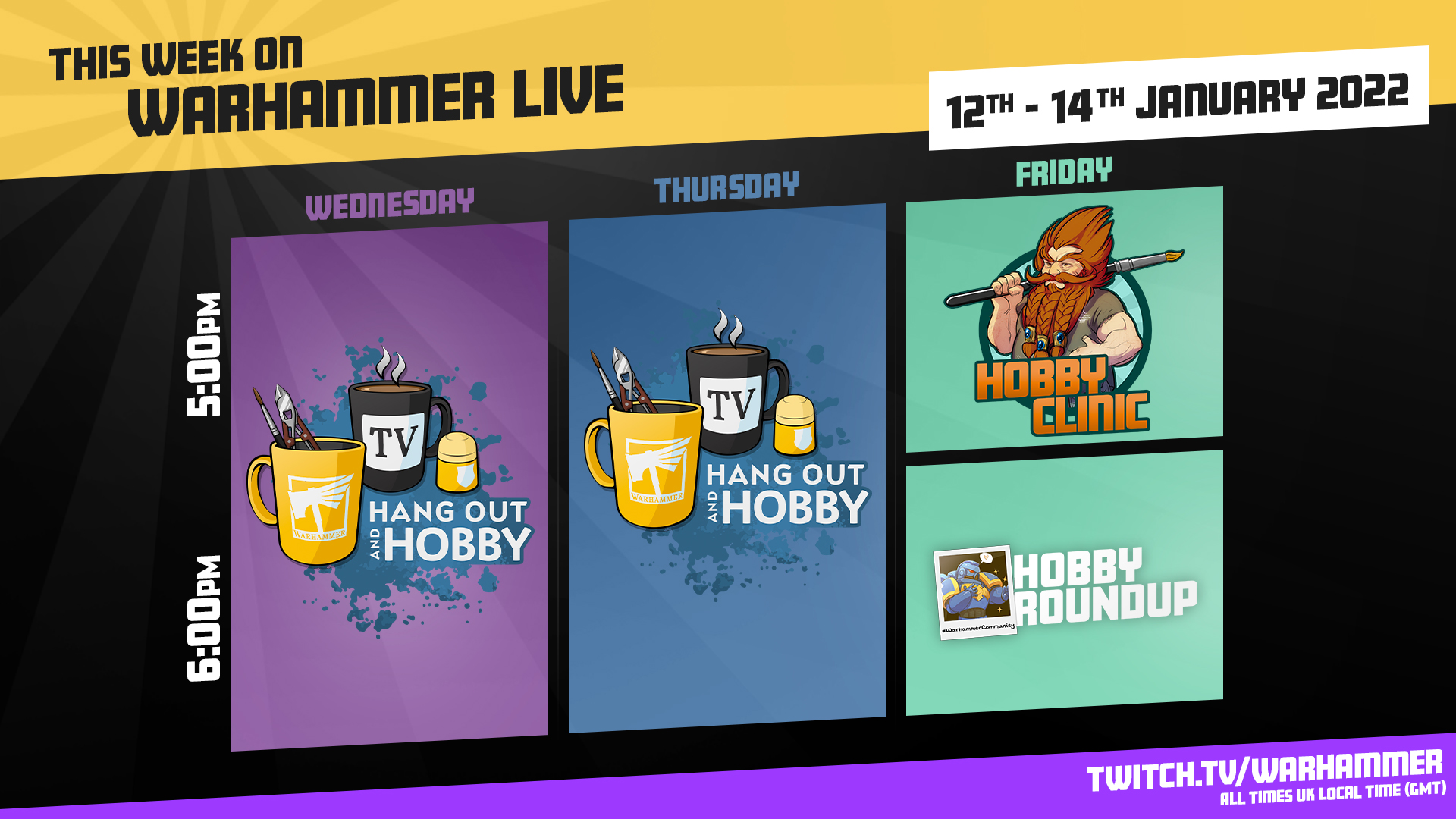 * White Dwarf 472 will be delayed a little while in Australia and New Zealand.

Discover the changes that are coming to your faction as the new edition of Warhammer Age of Sigmar dawns.