Turn Your Friends into Warhammer Fans!

We’ve all been there. We’ve all tried to recruit our friends to Warhammer, and we all know that trying to summarise this wonderful hobby/story/lifestyle that we’re all mildly to seriously obsessed with can sometimes feel like trying to explain quantum physics to a particularly stubborn cat.

We’re on hand to help. With a bunch of great new kits for beginners hitting pre-order this weekend, we’ve made an article that’ll help you in your quest to recruit your friends, family, loved ones and particularly intelligent pets. Just show them this…

This is an article about Warhammer. It will be, by no means, a scientific, objective analysis of Warhammer, because Warhammer is – and we say this without a trace of irony – the greatest thing produced by human culture. Seriously. We’re up there with polyphonic music, hats, and toast.*

What is Warhammer? Well, it’s sort of… everything. Or a little bit of everything. The good news is you don’t need to do everything at once. Most Warhammer fans pick the one or two bits of everything they love and stick with them.

Warhammer 40,000 is the most popular Warhammer game. It tells a story of the 41st Millennium, a grim, dark future where Mankind now rules the stars as a vast, theocratic superstate. This isn’t any ordinary science fiction – magic and Daemons are as much a part of this world as lasers and spaceships. Trying to sum up the entirety of the story of Warhammer 40,000 is like trying to eat an entire Black Forest Gateau in a single bite,** so we’ll summarise it thusly:

You can learn more about the story on the Warhammer 40,000 website. For now, we’re going to look at the Warhammer hobby – that’s building, painting, playing, and meeting people who want to do the same.

I Want To CREATE

To many, Warhammer is, at its core, about making really, really cool stuff. Think of it like owning a dollhouse, only the dollhouse is covered in skulls and you can make it fight other dollhouses.

Creating things in Warhammer takes many forms, but one of the most rewarding (and easy to learn) is painting. You probably don’t think you’re a miniatures painter. You’re probably looking at how small Warhammer is and thinking “I’d be RUBBISH at that.”

Well, guess what? You’re probably right. That’s how we all started, but you’re not going to be rubbish for long! We’ve got hours of free painting tutorials to watch on our dedicated painting tutorial website***, and some special sets just for you. Each contains paints and a few models to test your skills on – if you’re curious to try Warhammer, this is a great way to dip your toes into the water, and in no time at all you’ll have your very own first painted miniature to show off! 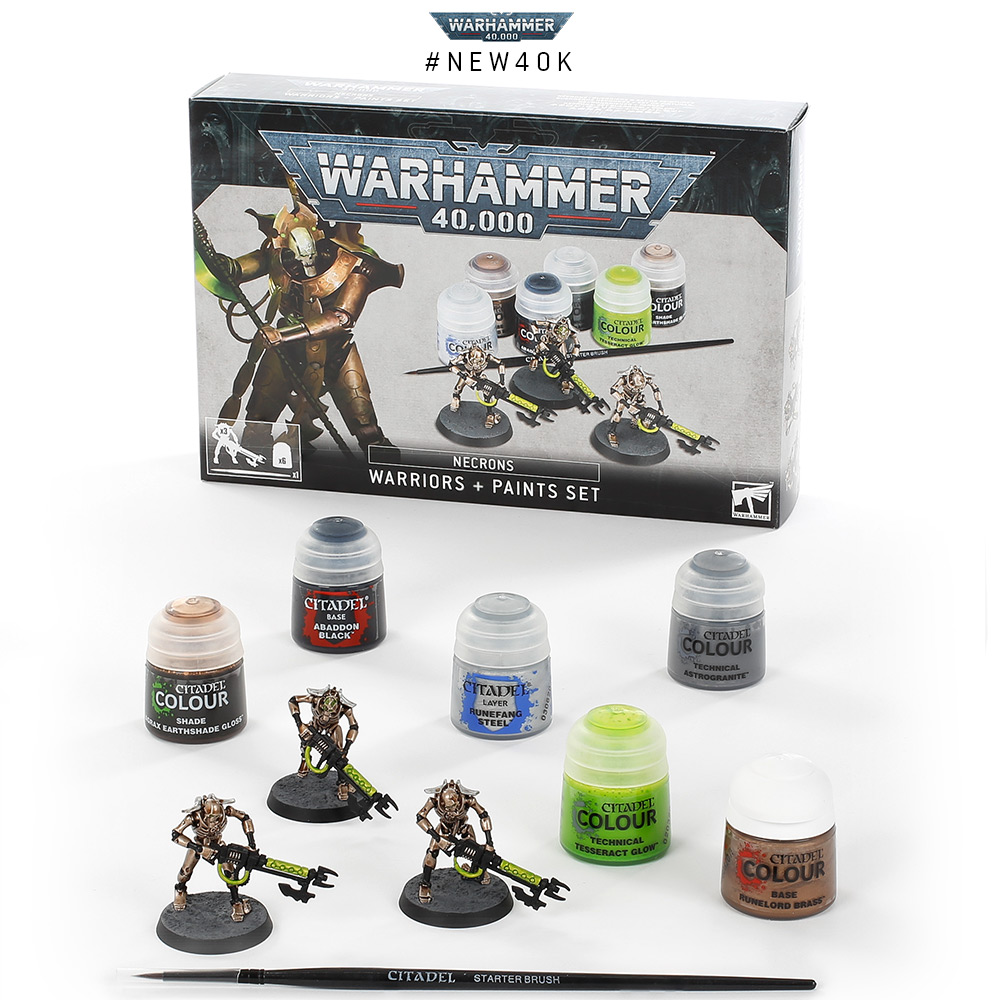 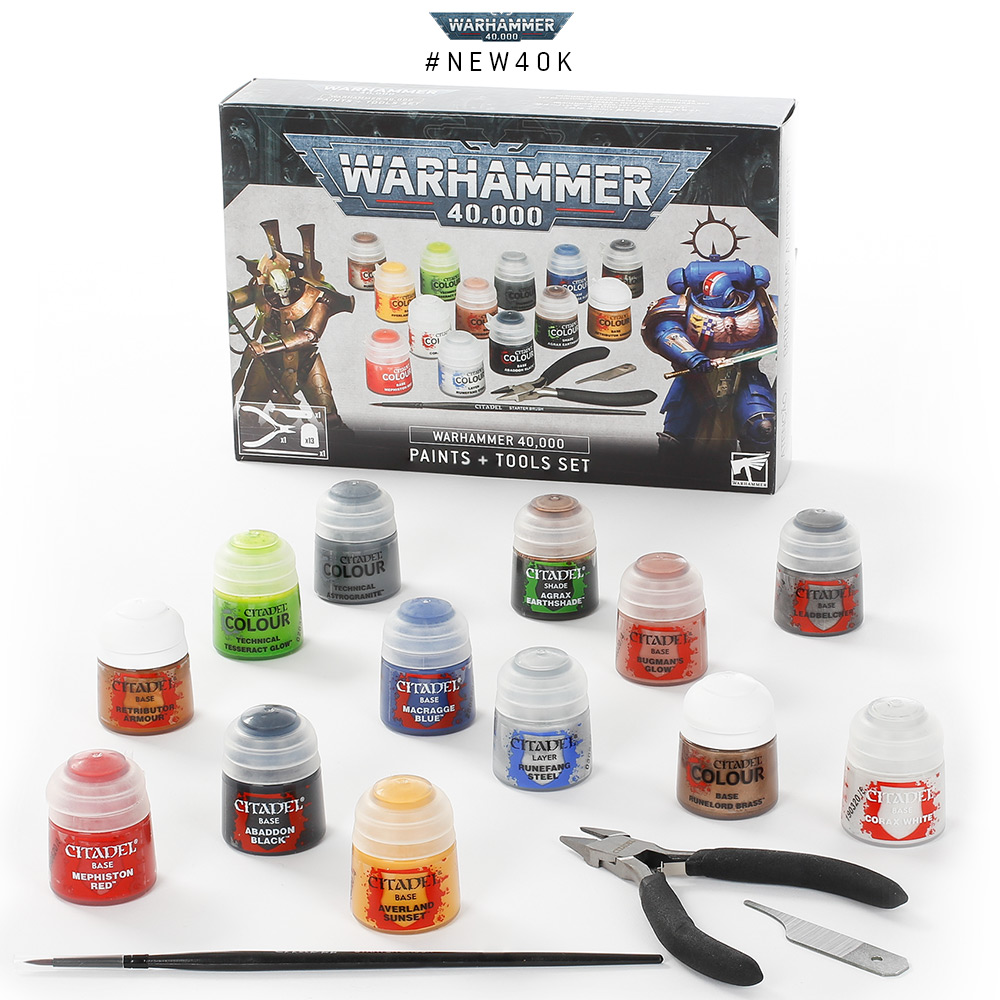 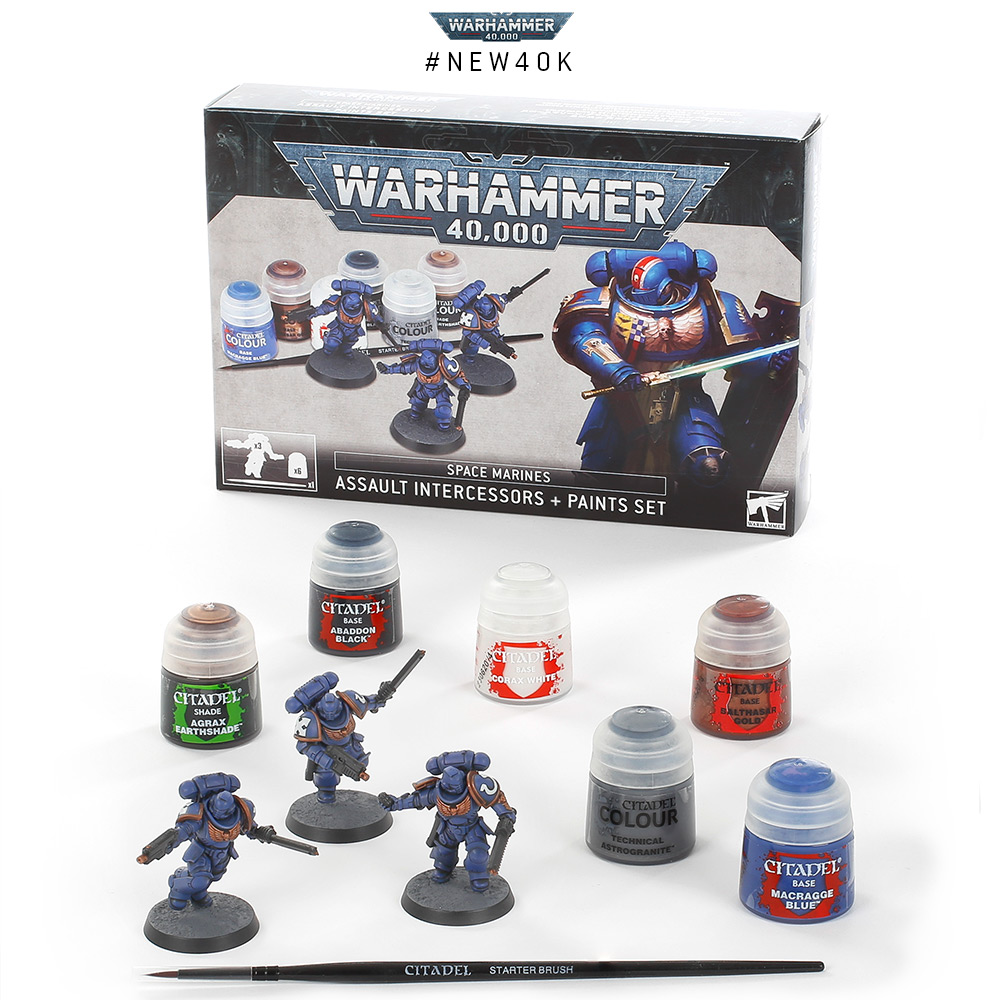 And trust us – hard as it might look, once you use Agrax Earthshade on a model for the first time, you’ll see how easy it can be.

I Want To PLAY

Love gaming? We’ve got you covered too. Warhammer 40,000 is a flexible, scalable battle game that can be used for anything from roleplaying epic stories with a few close friends to fighting ferocious tactical bouts at tournaments.

Warhammer can be picked up really, really quickly – while there are loads of armies, supplements and expansions to get stuck into, most people learn the core rules and expand out as they get more comfortable. Seriously, this massive rulebook… 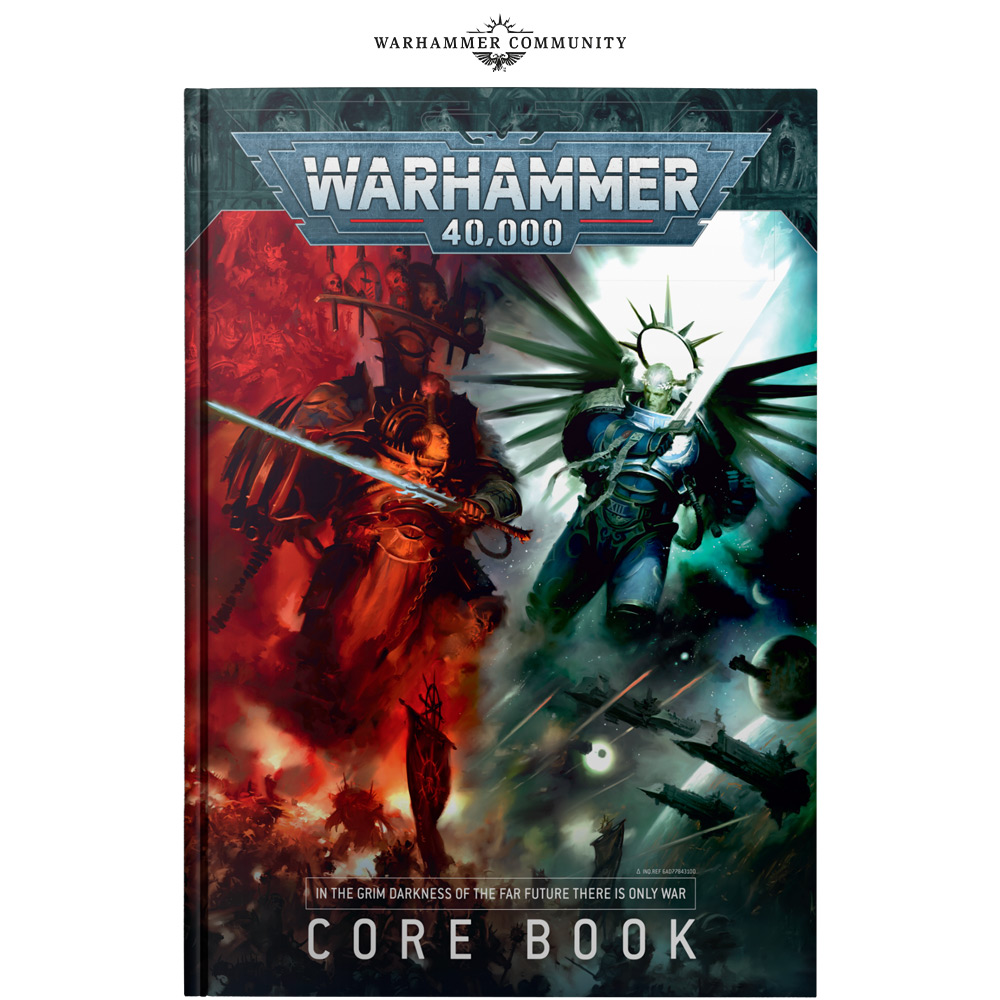 …is mainly rad pictures and lore about the grim, dark galaxy.

If you’re looking to learn, the Recruit and Elite Editions of the game are perfect. Each contains a booklet that teaches you Warhammer step-by-step, including a numbered map to help you get the hang of things and a couple of small, skirmish-sized forces. We’ve also made a series of learn to play videos to help you out 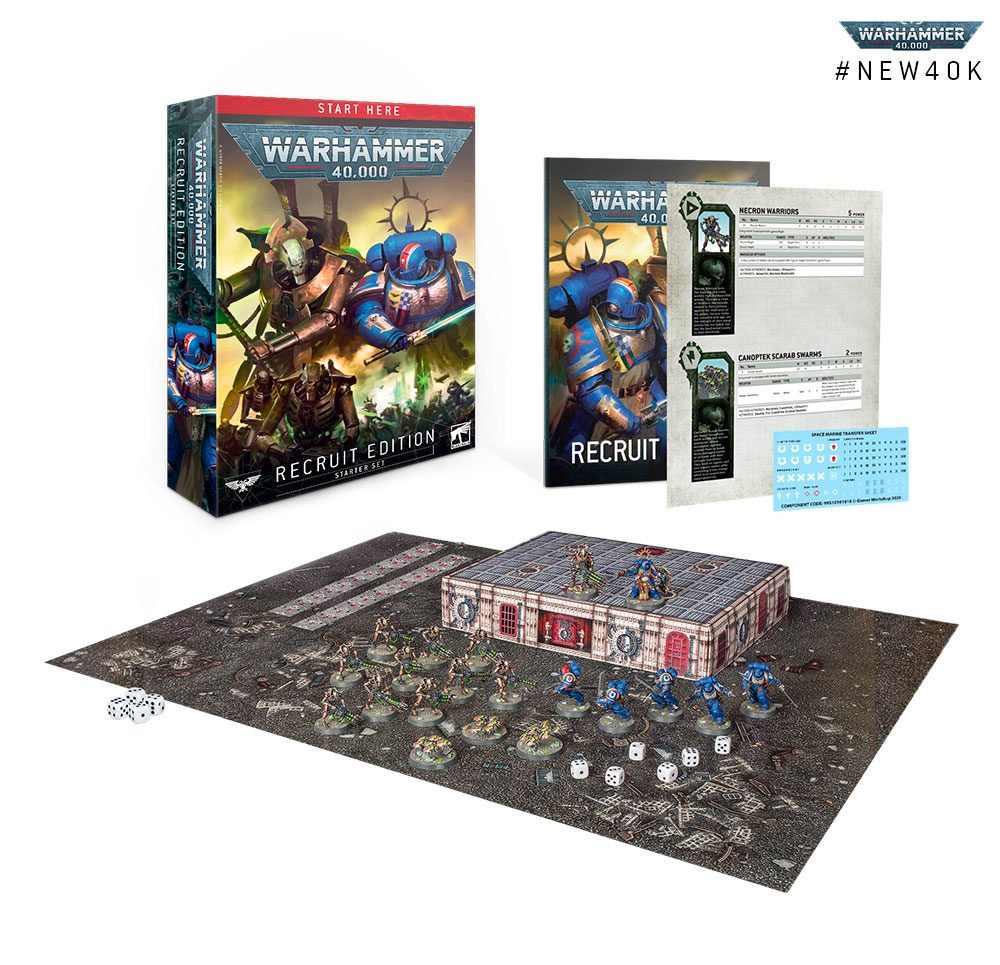 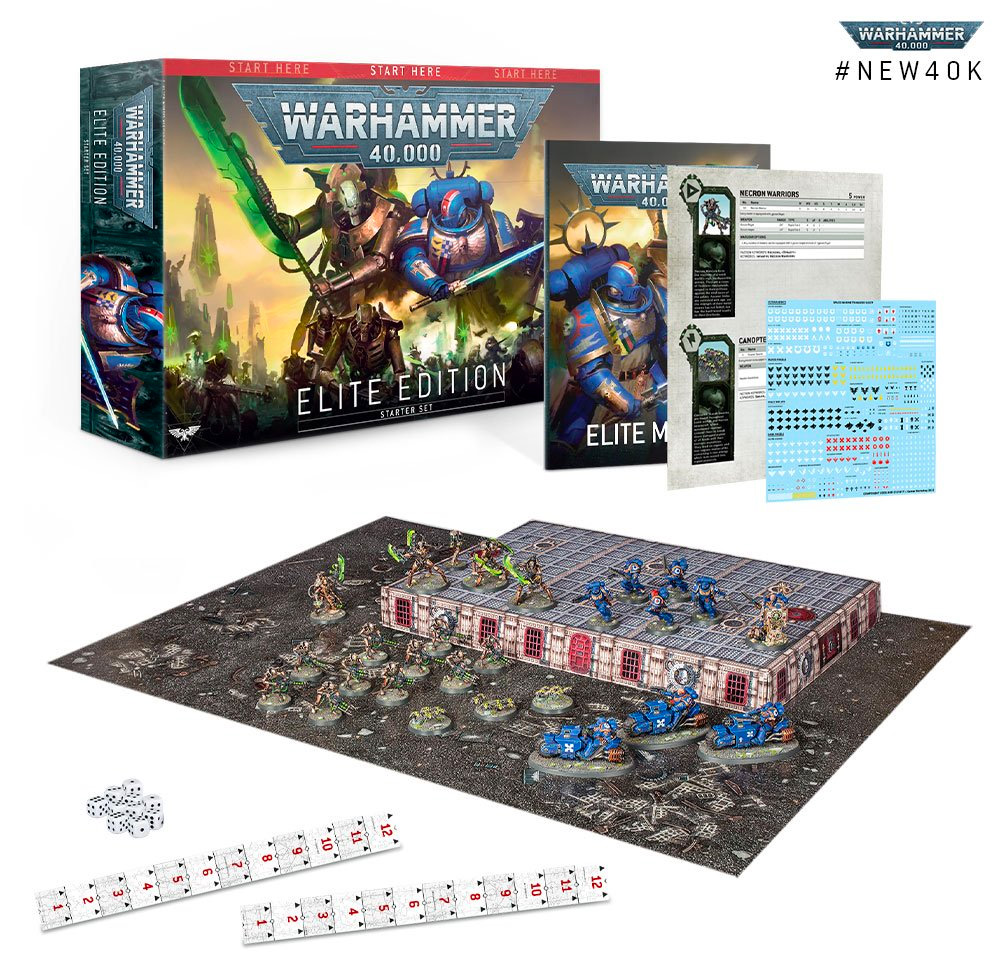 The Recruit Edition costs less than you’d spend on a video game – which, given you could spend literally years of your life playing with these models, seems pretty reasonable to us!

I Want To MEET PEOPLE

Warhammer’s greatest, worst-kept secret is that it’s a brilliant way to meet people. Seriously. Enter a Warhammer store and you’ll be lucky not to walk out with at least two lifelong friends. It turns out that battling people is a great way to get to know them – nothing breaks the ice like brutally describing what your chainsword is doing to their Necron Warrior. 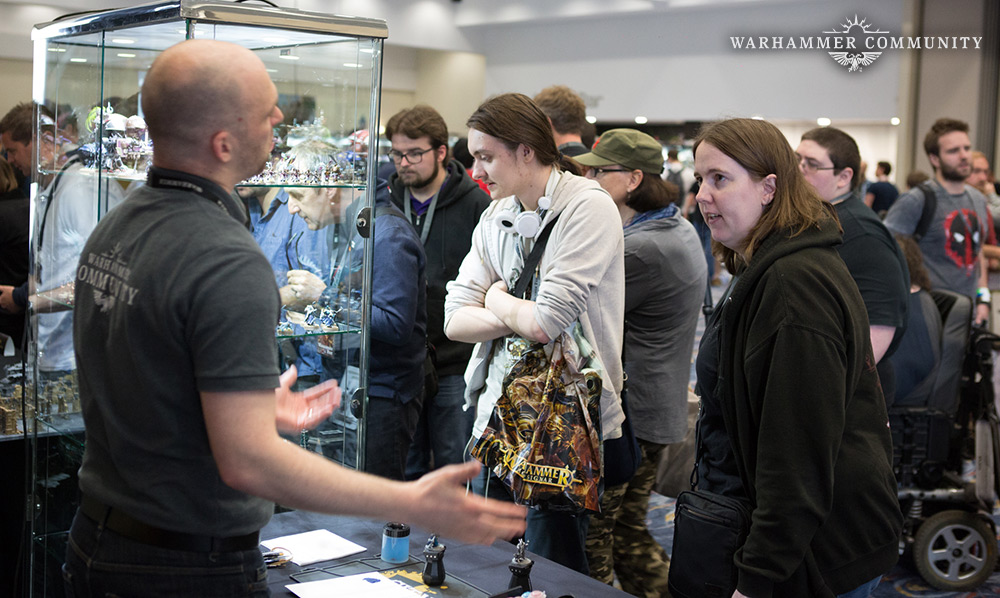 Right now, getting a Warhammer game in can be a bit tricky thanks to COVID-19 lockdowns but the good news is that setting a battlefield up at home is super simple. Grab a family member or friend you’re in a bubble with, pick up the Command Edition and you’ll be able to learn, play and look forward to those golden days yet to come where you can head to your local store and throw down with more people in a suitably socially-distanced fashion! 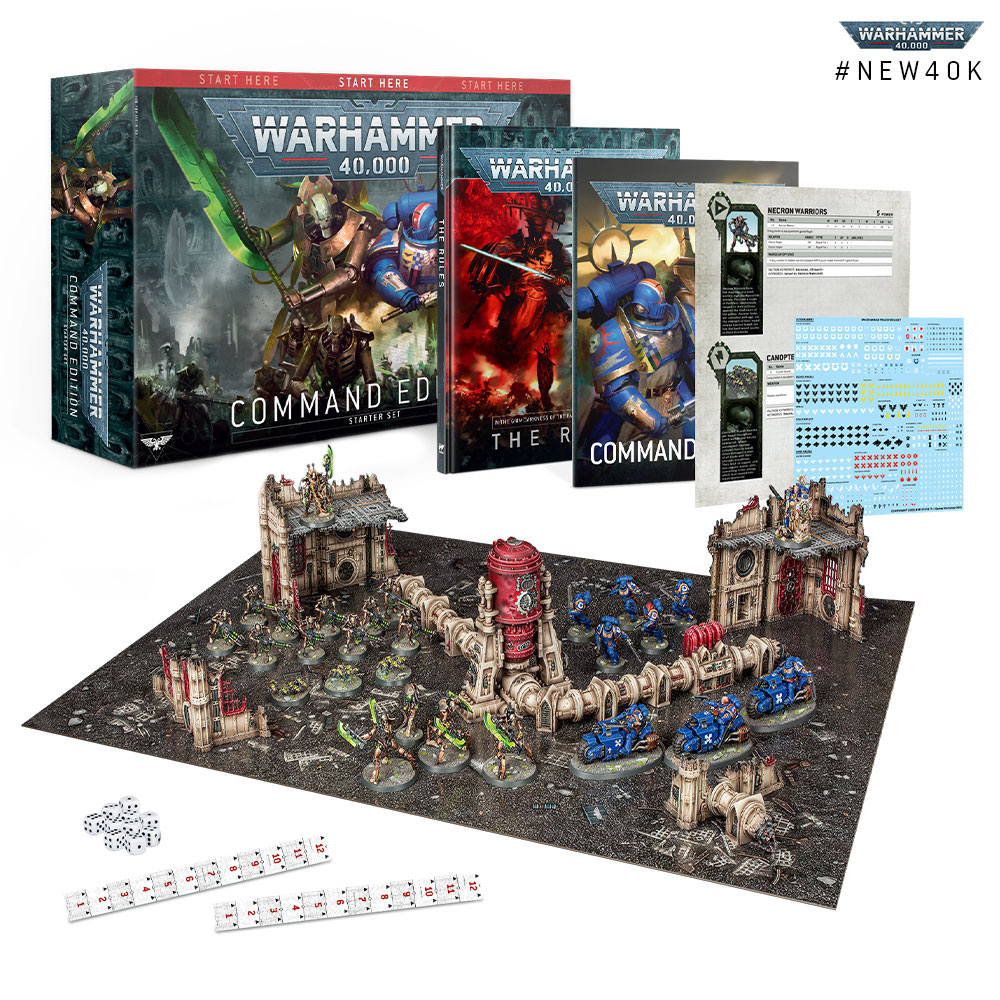 This big box is a super comprehensive way to get started with Warhammer. Crucially, it’ll give you everything you need to play all in one box. The scenery inside can be built in minutes and is gorgeously detailed, letting you transform any dining room or garden table into a terrifying warscape from the 41st Millennium. Seriously – long gone are the days where books were hills, cola cans served as surprisingly colourful reactors, and cats impersonated wild and untamed xenos beasts (usually with great success).

So, this is a great time to get all the awkward first steps out the way, tackle the learning curve during lockdown, and be set up to make some lifelong friends (or, at the very least, friendly rivals) as soon as your lockdown is over!

It’s a really, really exciting time to get involved with Warhammer. However you want to get started, and whatever you want out of this hobby, we’d absolutely love to have you along for this incredible journey.

You can pre-order some of the starter stuff we’ve been looking at above this weekend, and right now, there’s a friendly store manager at a shop near you who is ready and waiting to answer your questions.

In the meantime, we’ve only scratched the surface of what makes Warhammer 40,000 so great. If you’d like to learn more about the game or discover its incredible story, we’ve got a whole website for folks just like you!

* Indeed, some (ie, us) have theorised that the Terracotta Army is one of the world’s earliest and most advanced examples of a Warhammer collection.
** Except instead of cherries, you’ve got skulls, and instead of cream you have…even more skulls. Seriously, right now you might think we’re joking about the skull thing but, if anything, we are understating the number of skulls you’ll encounter in this hobby.
*** They’re also on the YouTube, and there’s a really helpful app as well.

We’re sure you’re eager to see some of the Indomitus models in action… this Saturday, you’ll get your chance!

We’re showing off even more new models for both the Space Marines and Necrons, coming hot on the heels of the Indomitus boxed set.

See what’s in store for the evolution of #New40K codexes, plus yet MORE new models!