The new edition of Warhammer Age of Sigmar is absolutely packed with changes designed to make your games feel more fun and characterful than ever before. One of the most distinct and memorable phases of the game is the hero phase, where great generals prepare their strategies and magi unleash devastating sorceries.

In the new edition of Warhammer Age of Sigmar, the hero phase has been expanded to provide a new tactical layer to the game, where every character can contribute and disciplined list-building pays dividends.

There are loads of awesome command abilities in Warhammer Age of Sigmar, but in the previous edition, some would almost never see play because they belonged to models who weren’t being used as generals. In the new edition, every Hero can contribute and use their command ability, whether they’re your general or not. 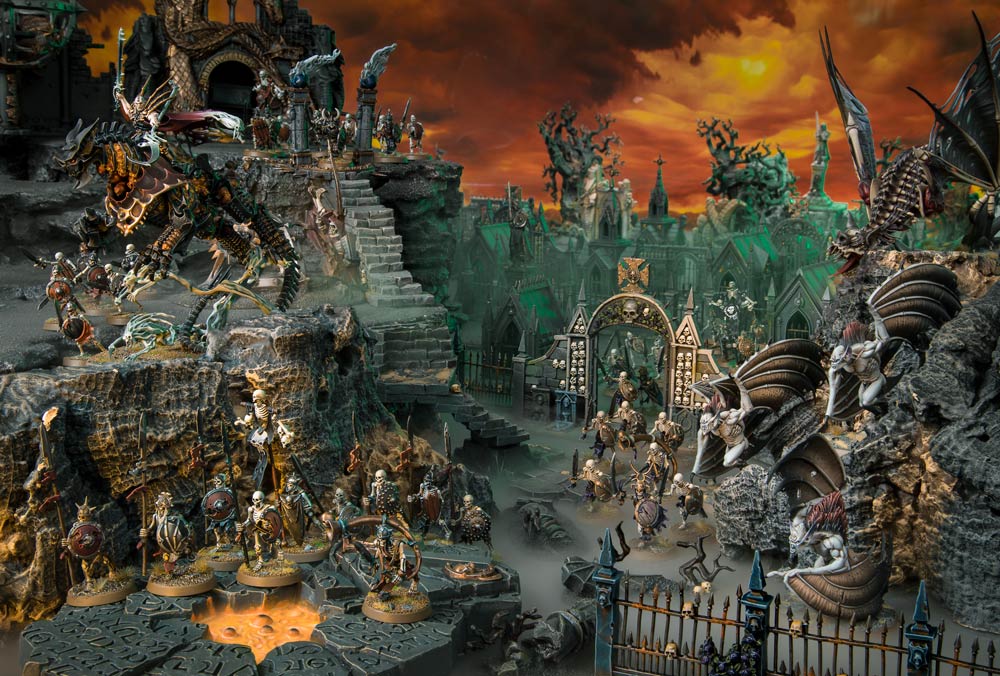 This opens up all sorts of possibilities when building your armies – you’re free now to choose the Heroes and command abilities you want, regardless of which general you pick. A Legions of Nagash army, for example, might be led by a Vampire Lord, but you’ll still be able to enhance your Skeletons with the Wight King’s Lord of Bones, or a Khorne Bloodbound force could fight under the command of a Mighty Lord of Khorne while keeping the flexibility to use the abilities of an Aspiring Deathbringer when you needed them.

There’s a twist, however – to use any of your command abilities, you’ll need a new resource, known as command points. Command points represent the tactical cohesion of your forces – you’ll receive one to add to your pool every turn, and you’ll get an additional point at the beginning of the game per warscroll battalion you’ve used.

This adds a dynamic aspect to the hero phase, where you may want to refrain from using a command ability one turn so you can spend two command points in the next. It also influences how you’ll write your lists, as warscroll battalions will allow you to get more out of your army. 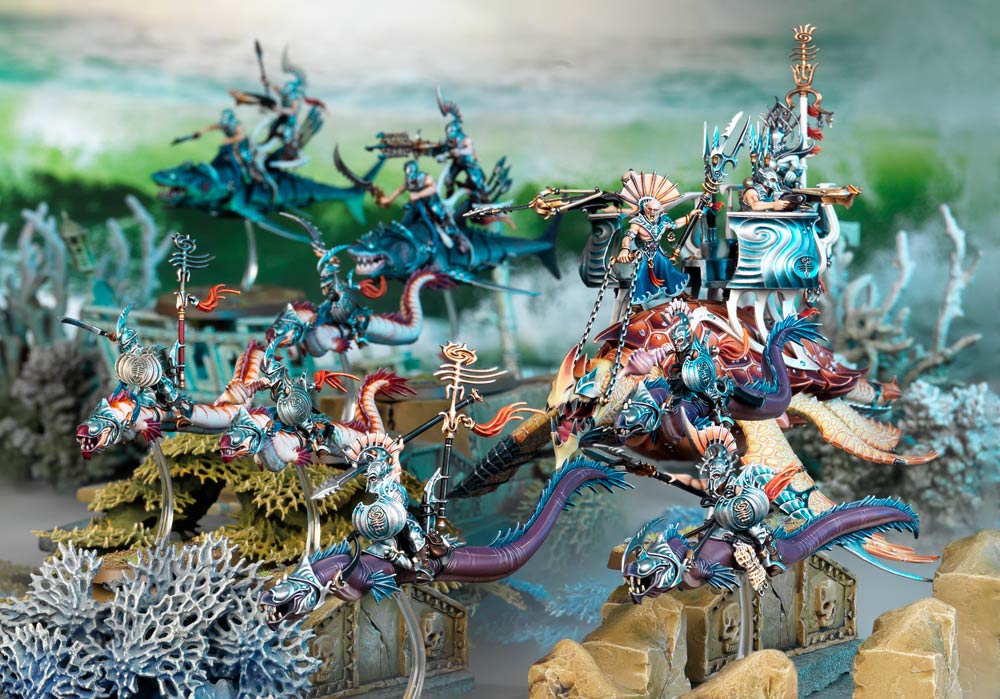 The new and improved command ability system turns the hero phase into a tense battle of wits where heroes unleash their tactical abilities and where you’ll be rewarded richly for careful planning and army building – and it’s just one of the many exciting changes coming to Warhammer Age of Sigmar. Earlier today we had a look at what the new edition means for the Fyreslayers, and be sure to stay tuned tomorrow for even more daily previews right here on Warhammer Community.

That’s not all! There are now three command abilities every single army and every single general can use – a tweaked Inspiring Presence, At the Double and Forward to Victory: 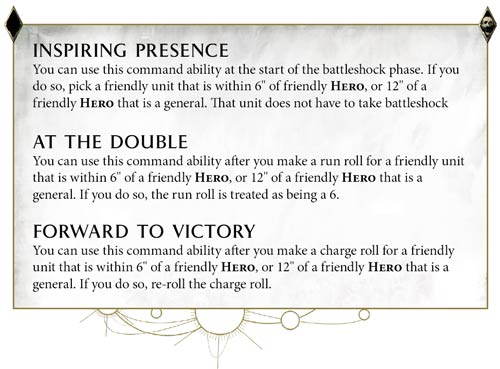 Inspiring Presence will now only last for a single battleshock phase, but can be used in your opponent’s battleshock phase too, making it a much more reactive ability – perfect if a unit of Brutes you thought were safe suddenly get hit by a deluge of Bravery-reducing abilities you hadn’t predicted, or if you unexpectedly lose the battleshock-mitigating abilities of a Hero like a Bloodsecrator.

Forward to Victory, meanwhile, helps you ensure your key charges go off. It’s a great way to get around a bad roll or to give a unit arriving 9″ away – like Hexwraiths, or Vanguard Chamber Stormcast Eternals coming round a flank – another shot at clinching a tricky roll.

As you can see, these command abilities all require a Hero nearby, and we’d recommend having 1-3 smaller champions handy alongside your general, like a Crypt Haunter Courtier for the Flesh-eater Courts or a Branchwych for the sylvaneth. 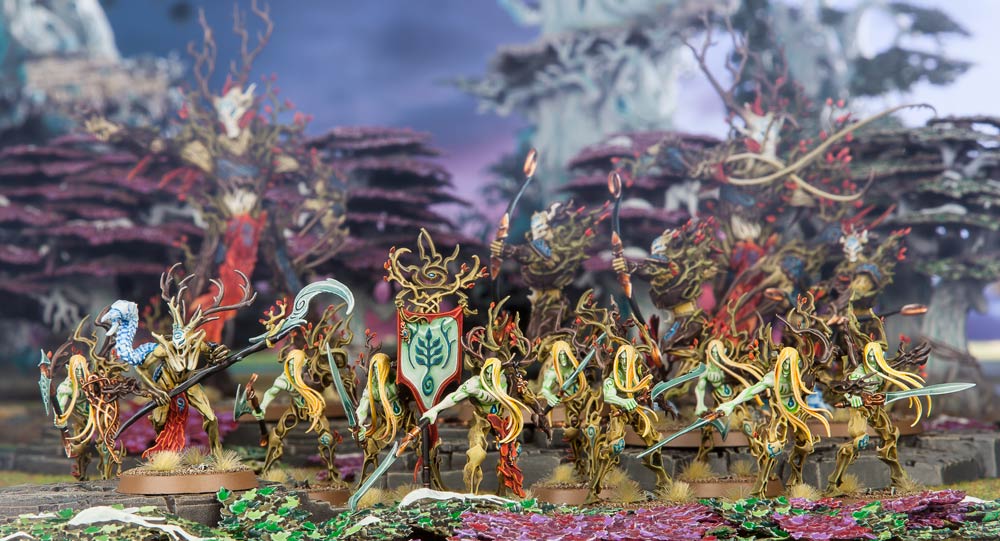 The new command point and command ability system will make your games deeper, more tactical and more fun than before. Whatever your army and whatever your heroes, you’ll be able to control the flow of the game, unleash cunning combos and make the most of your favourite characters.

Command points are just one of the exciting changes coming to the new edition – if you missed it, make sure to check out our look at the tweaks to turn priority and find out what the new edition means for the Fyreslayers.

It’s Rumour Engine time! You know the drill – we show you a sneak preview of an upcoming release, and …

Ogre Teams on the Pitch

“I sent Jim home for the night so we could chew the fat about Ogres, a team near and dear …