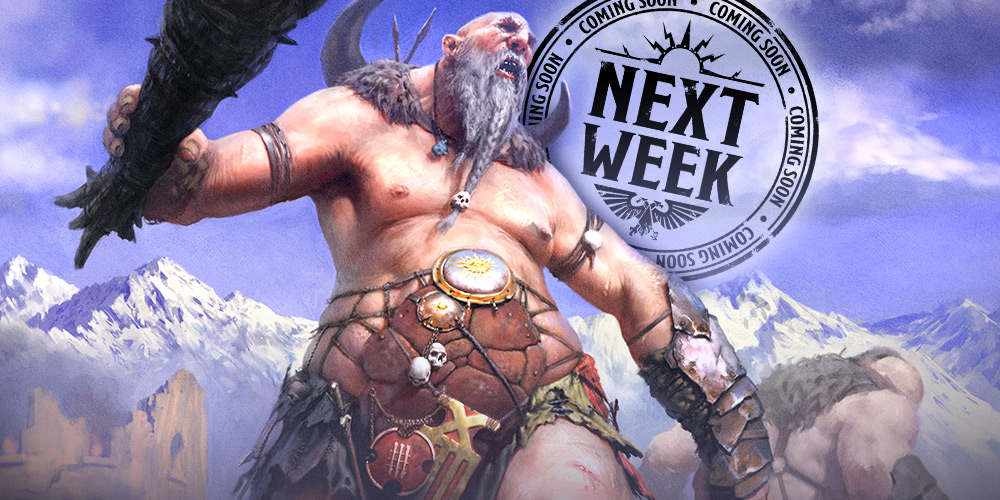 This week brings a MASSIVE set of releases. Mega monsters are preparing to invade the Mortal Realms, more Necron units shake off the dust and join the fray, and another line of action figures from the 41st Millennium are poised to strike a pose on your shelves! Watch this to get the rundown.

But that’s hardly everything… read on for more details.

The Sons of Behemat are the biggest thing to hit the Mortal Realms in quite some time. And this coming Saturday, you’ll be able to pre-order one of the largest monster kits ever made for Warhammer Age of Sigmar – the Mega-Gargant. 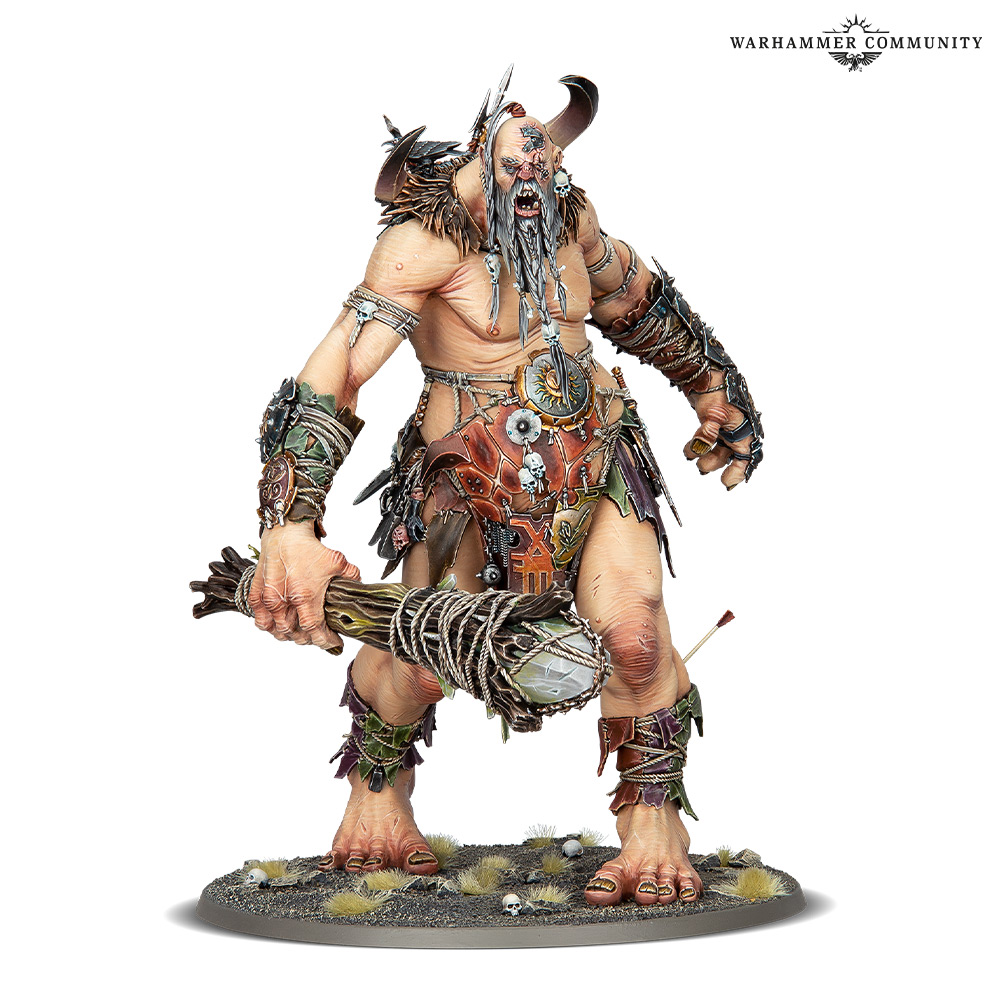 This box can make any one of three distinct types of Mega-Gargant, like the mighty Warstomper, above, or the Kraken-eater and Gatebreaker below. 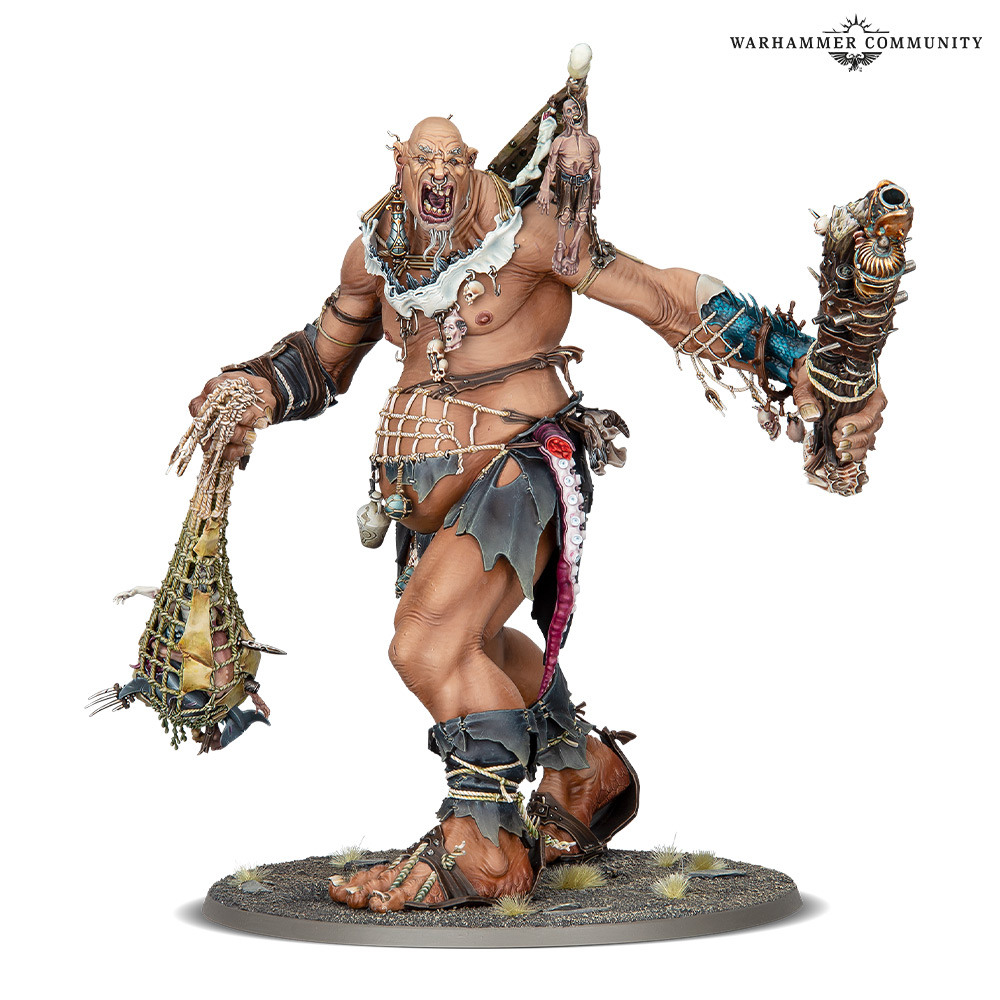 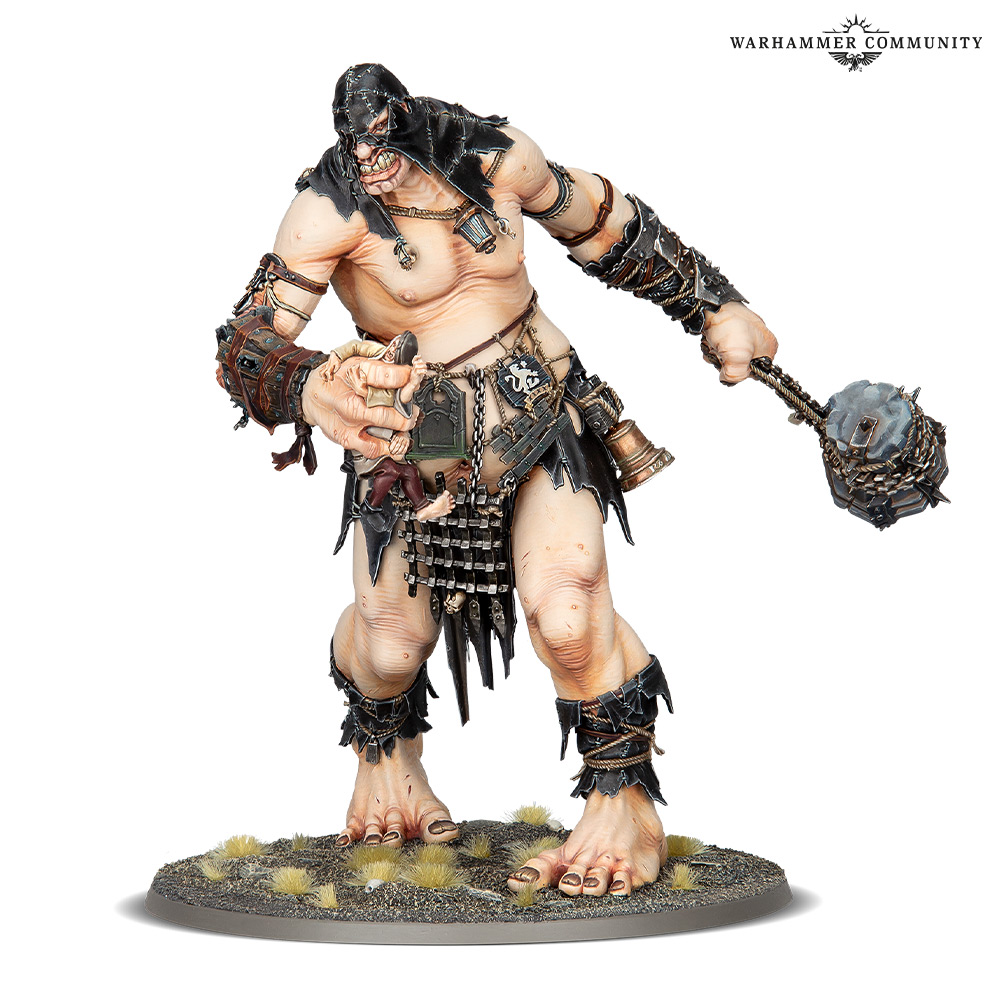 You’ll also be able to fill out your super-sized ‘rank-and-file’ with some Mancrusher Gargants, now available in sets of two. 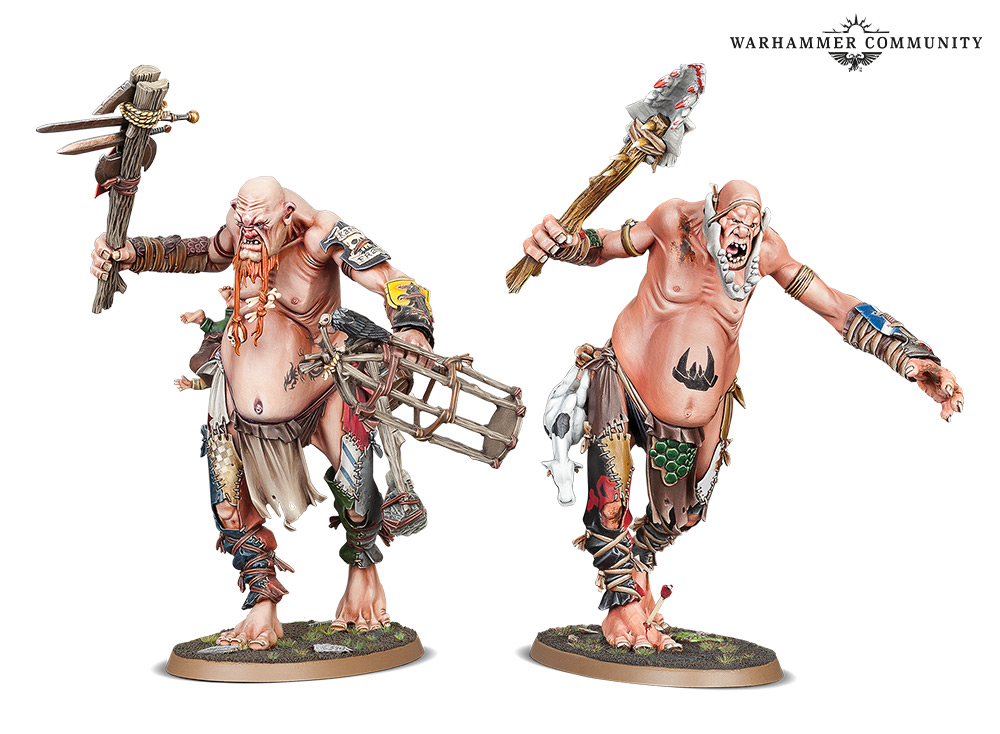 Gargant culture is more complex than you might have thought, and it’s all spelled out in Battletome: Sons of Behemat. This book is essential for any Warhammer Age of Sigmar general, since every single faction can now include Mega-Gargant mercenaries.

Learn about the history of the Sons of Behemat, their current role in the Mortal Realms, and rules to field an entire army of gargants in your games. 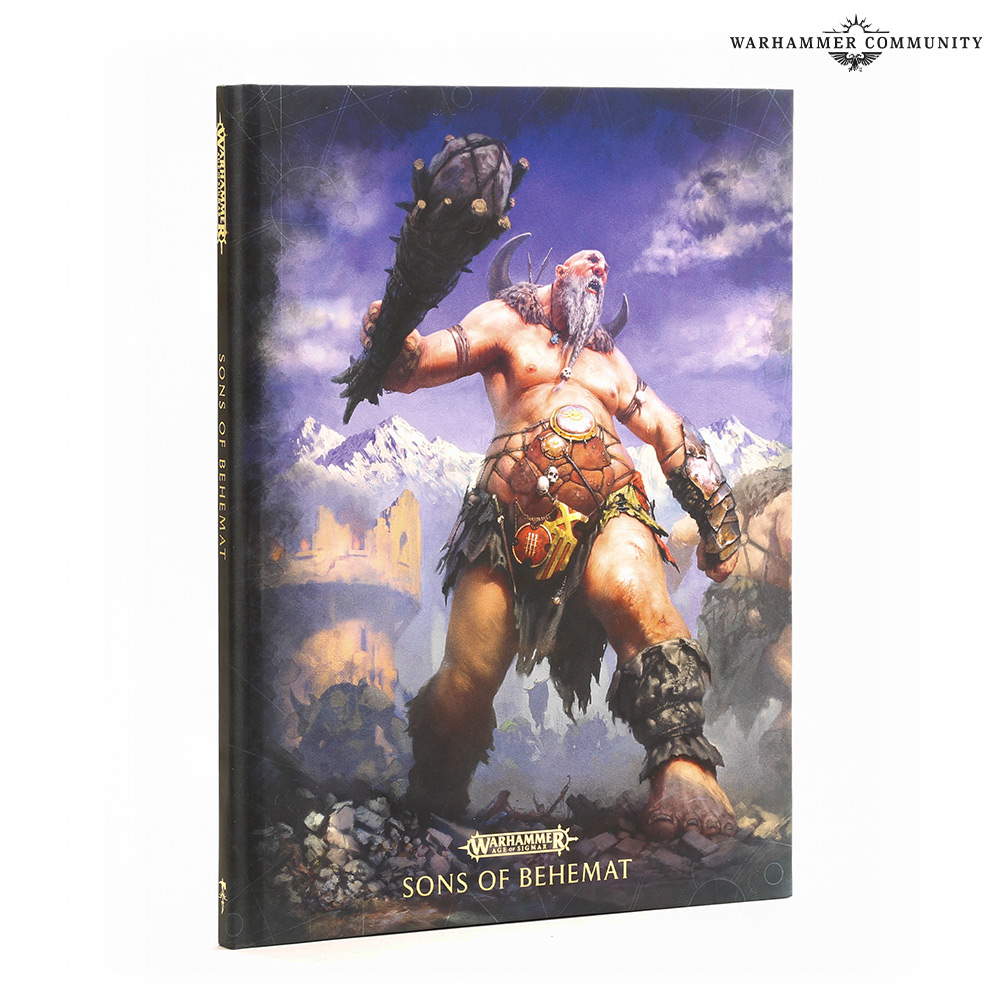 Celebrate the release of this potent new faction with a book worthy of a Godbeast. This very limited, numbered edition features an epic piece of wrap-around gloss art, gilt edges, and a ribbon bookmark. 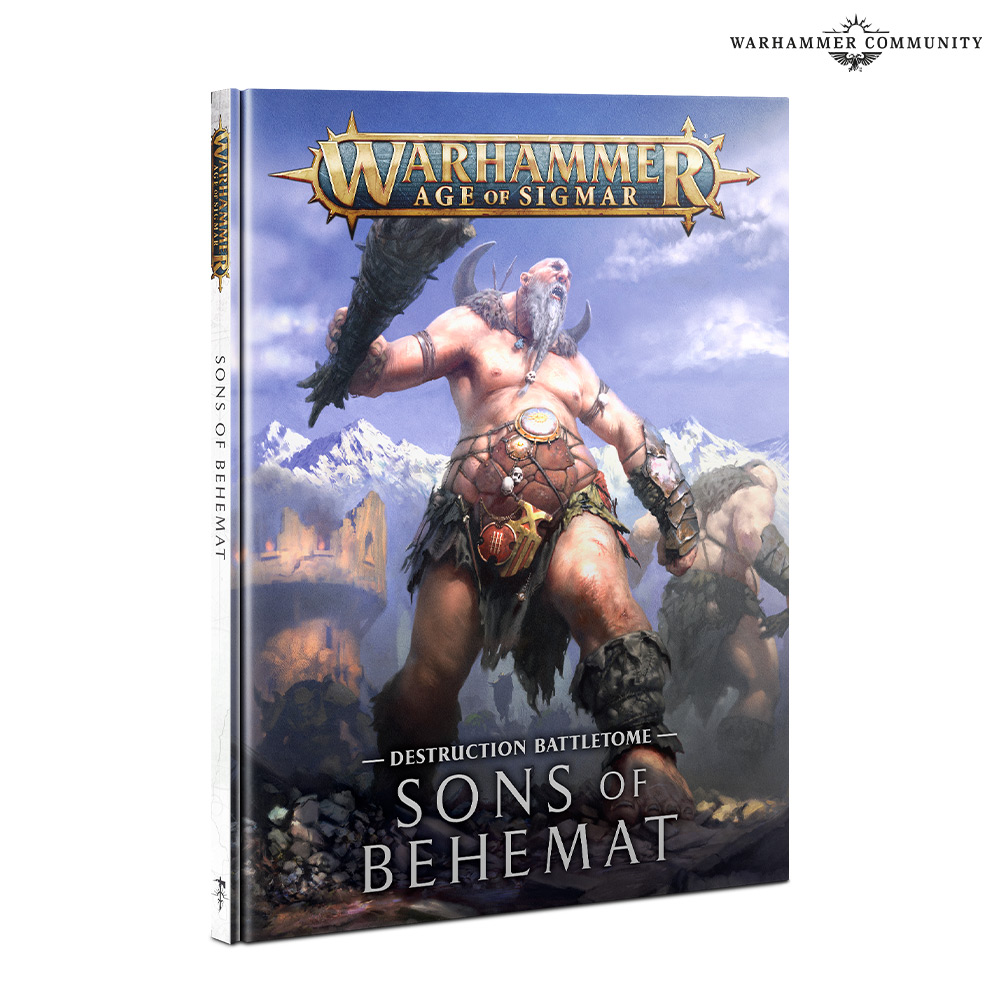 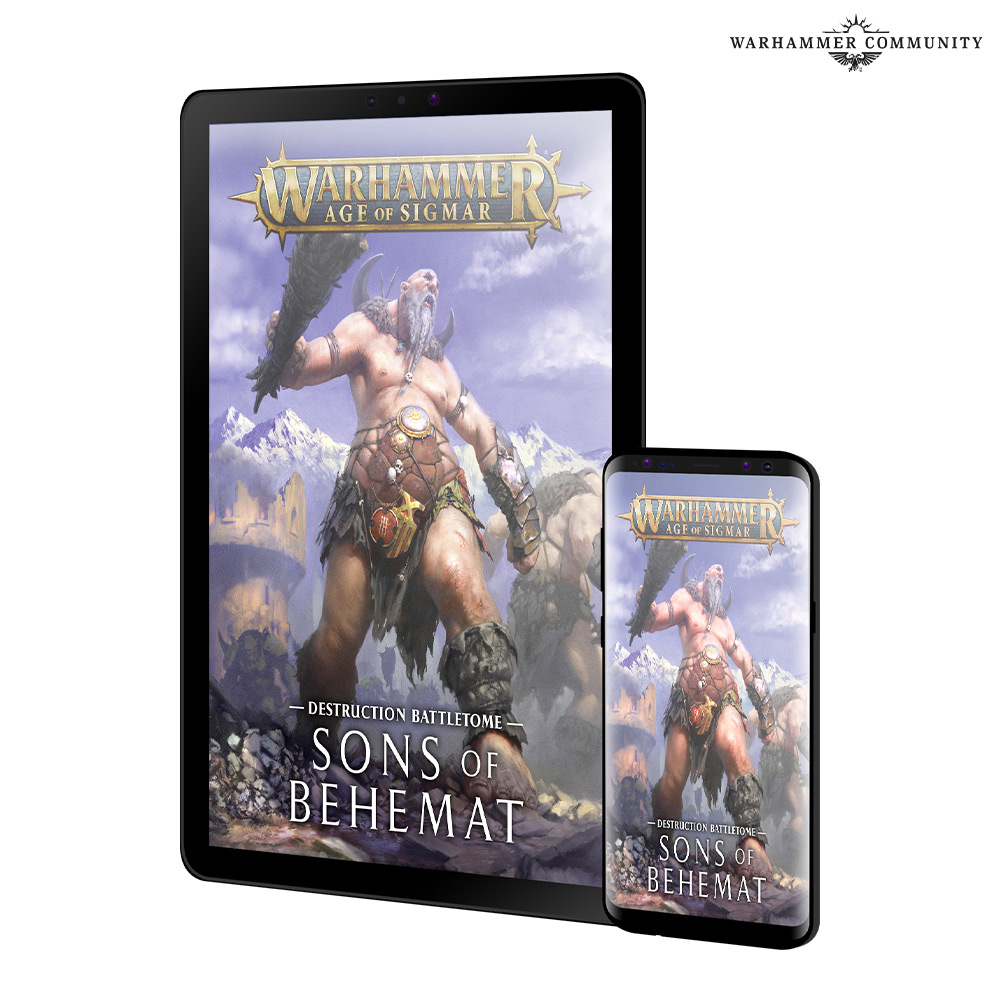 The Battletome will also be available in standard hardback and eBook editions. Alongside the book you’ll find a pack of Warscroll Cards and tokens to help you get playing right away. 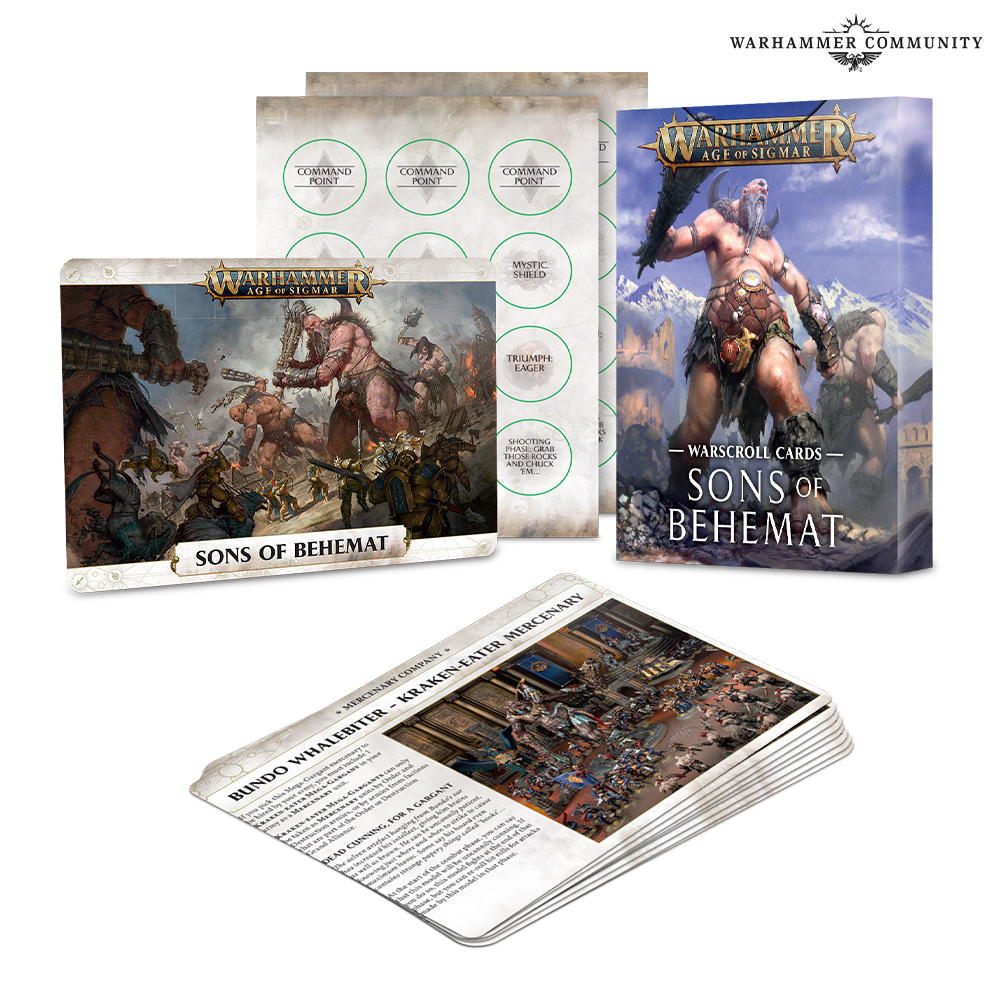 If you want to learn more about the Sons of Behemat, a new audio drama by Graeme Lyon dives into their savage way of war. This rip-roaring tale will keep you fired up while you build and paint your gargants. 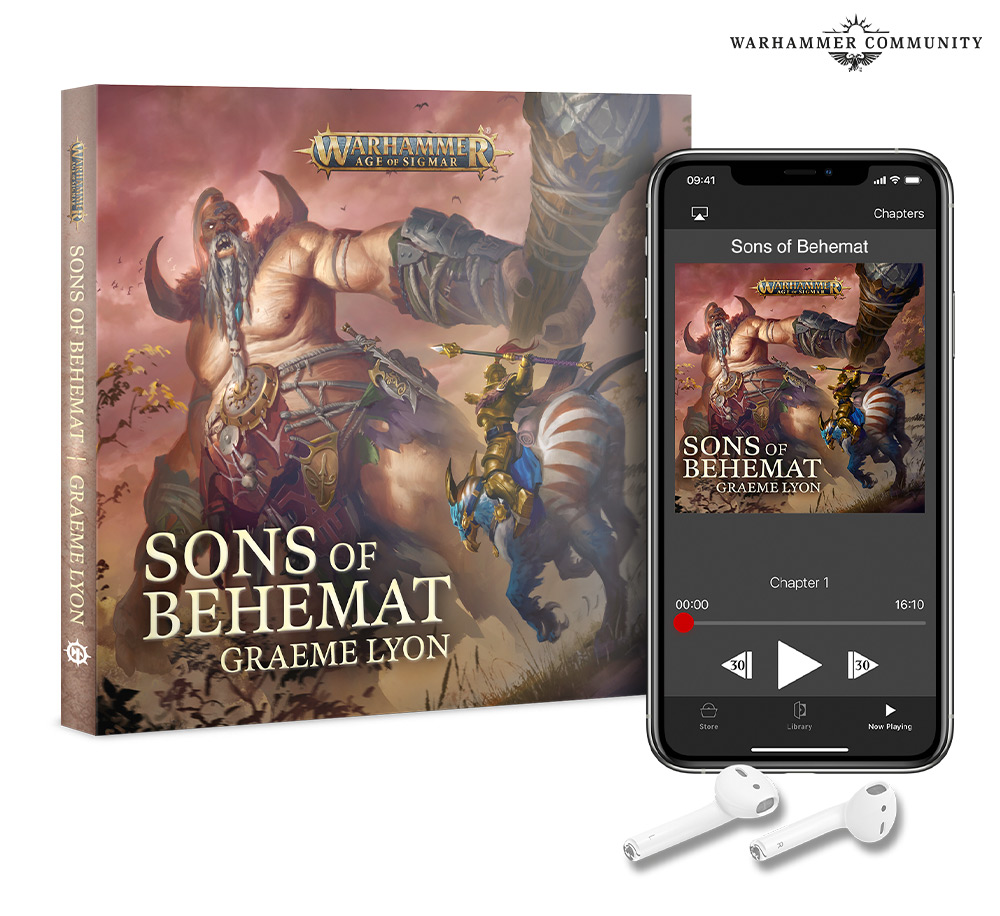 We’ll be talking about the Sons of Behemat all week long, so check back for a closer look at the background and art, models, and rules of this exciting new army.

Rounding out our Warhammer Age of Sigmar releases are a pair of Heroes for the Kharadron Overlords and Disciples of Tzeentch, previously only available in the Aether War box. 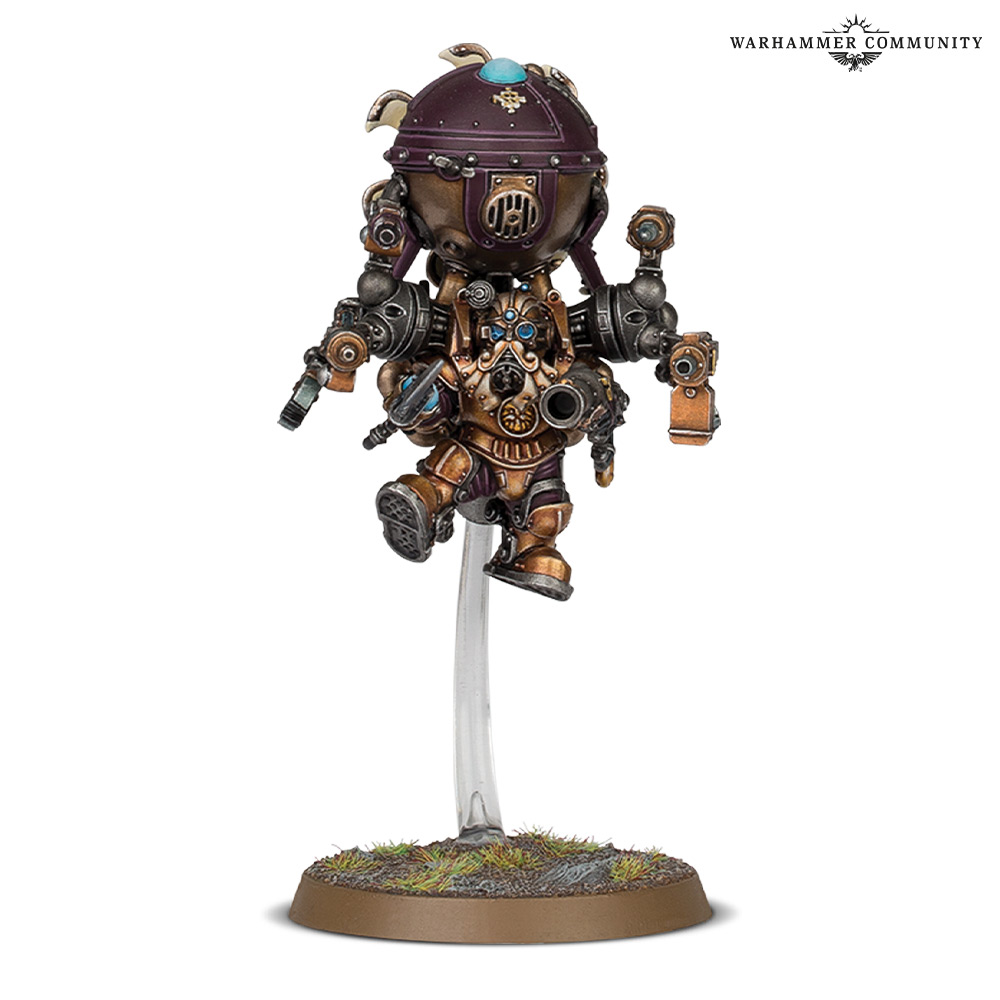 This Endrinmaster has a fully decked-out Dirigible Suit, including a massive battery of weapons, because he just couldn’t carry enough. 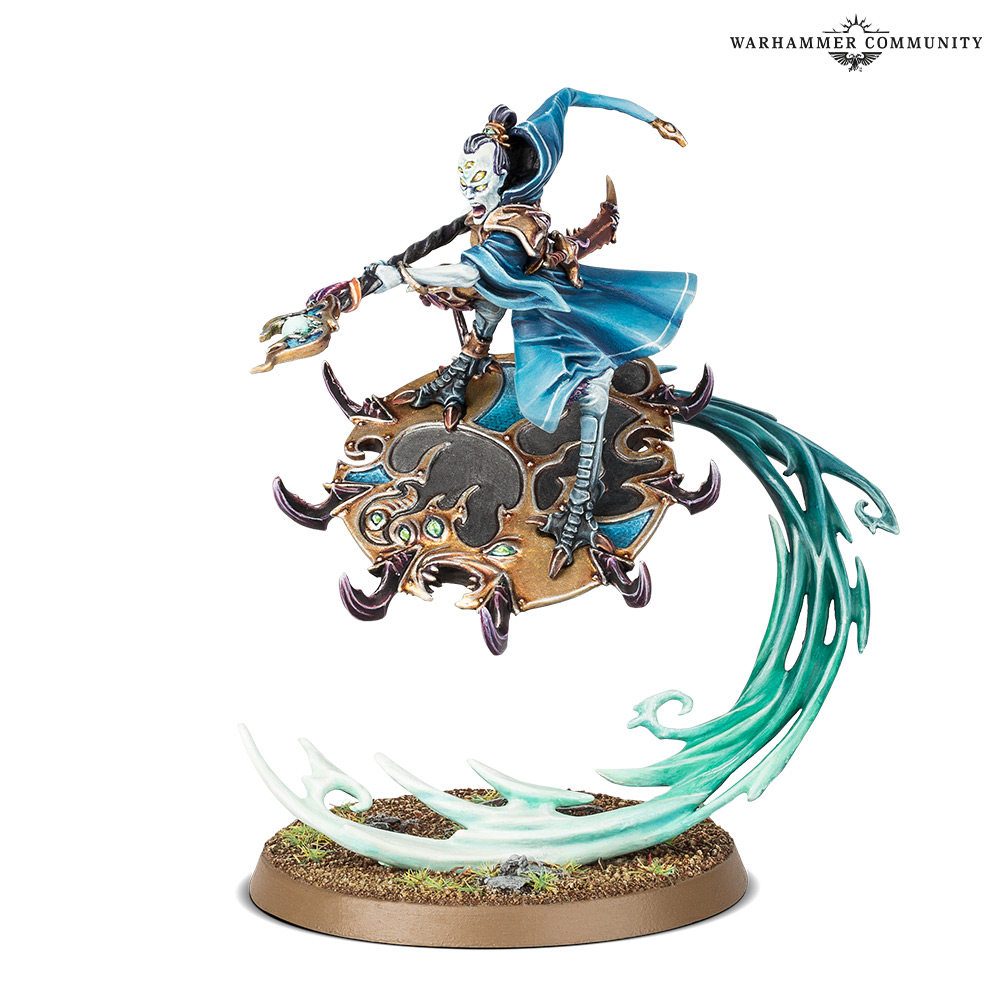 This Magister has clearly been blessed by the Lord of Change, riding to battle atop a Disc of Tzeentch. His mutations and mastery of eldritch sorcery make him a potent and inspiring champion to lead your armies.

Now, if you thought we were finished with Necron releases, you’ve got another thing coming. Well, loads of things, really…

First up, the ubiquitous and versatile Necron Warriors, previously only available in the Indomitus box and the various Starter Sets, will soon be released on their own to bolster your ranks of implacable murder androids. Each box contains 10 warriors and three swarms of Scarabs. 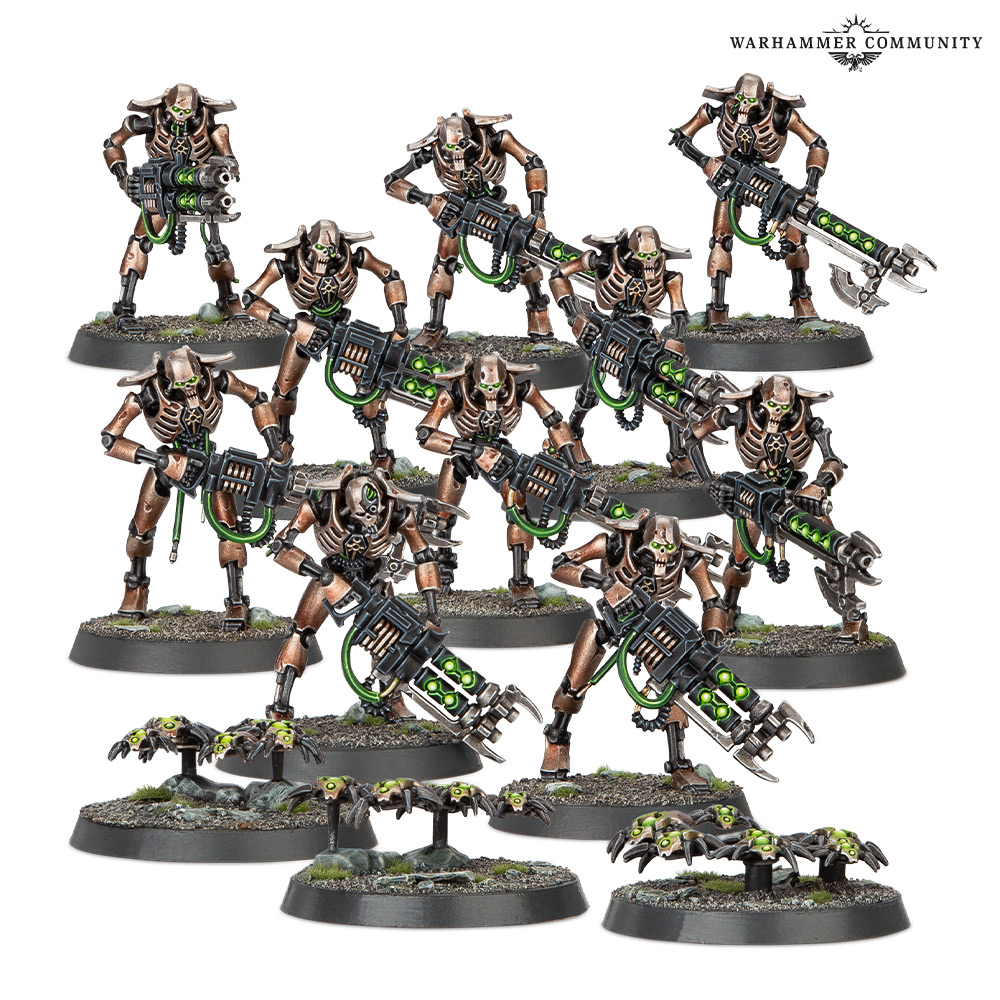 Also on deck are the creepy, tri-legged Skorpekh Destroyers in boxes of three, plus a Plasmacyte to drive them into a frenzy of whirling blades. 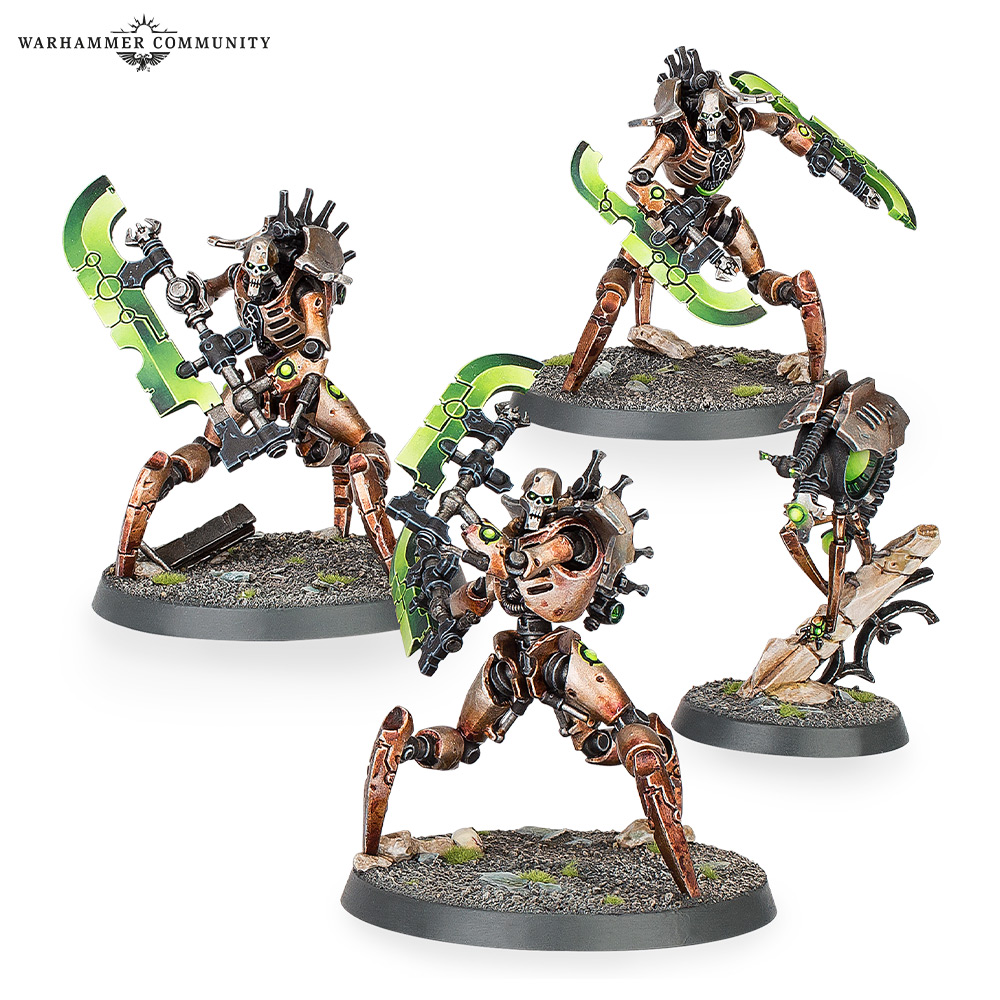 Speaking of Destroyers, the deadliest duellists in the 41st Millennium are about to make their presence felt. Hexmark Destroyers wield no fewer than six devastating enmitic disintegrator pistols, and their mechanical accuracy will leave their enemies with nowhere to hide.* 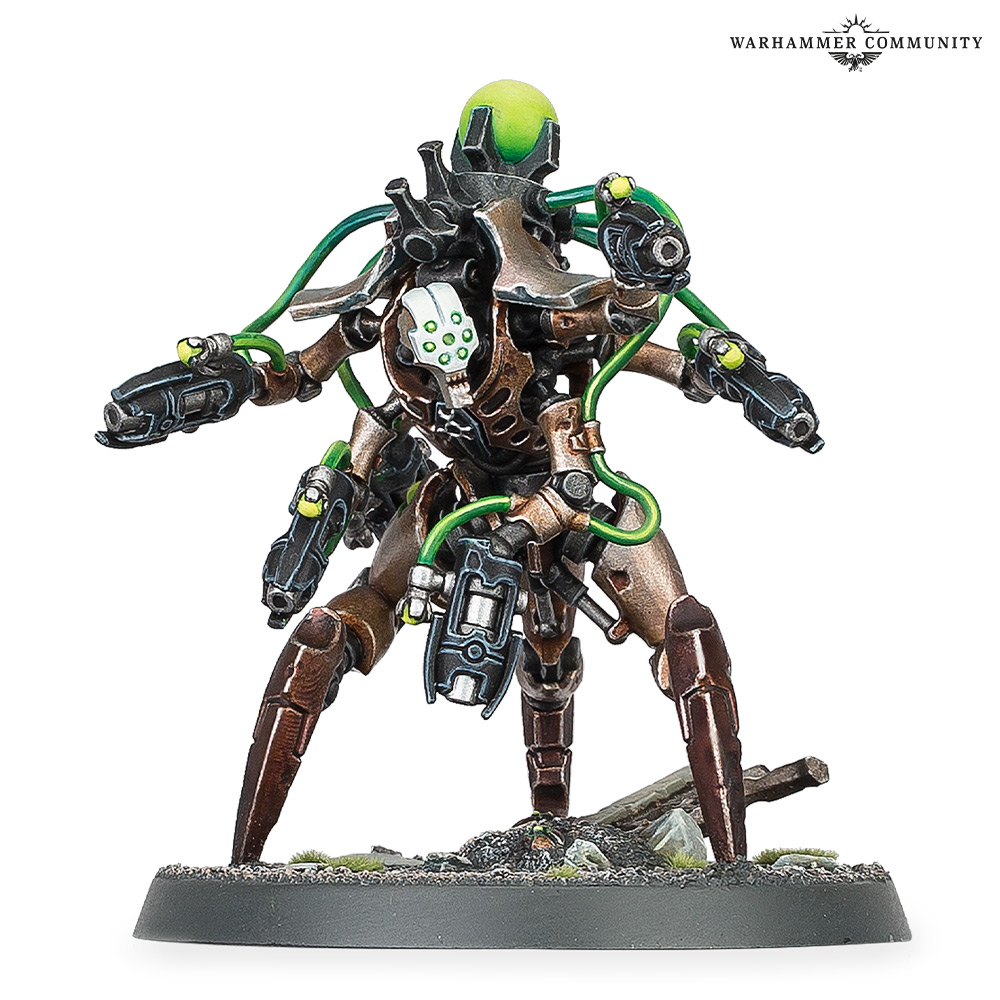 If you want to display your allegiance to the Necrons for all to see, we’ve got just the thing. McFarlane Toys are releasing a set of new action figures, including this Necron Warrior and accompanying Scarab! 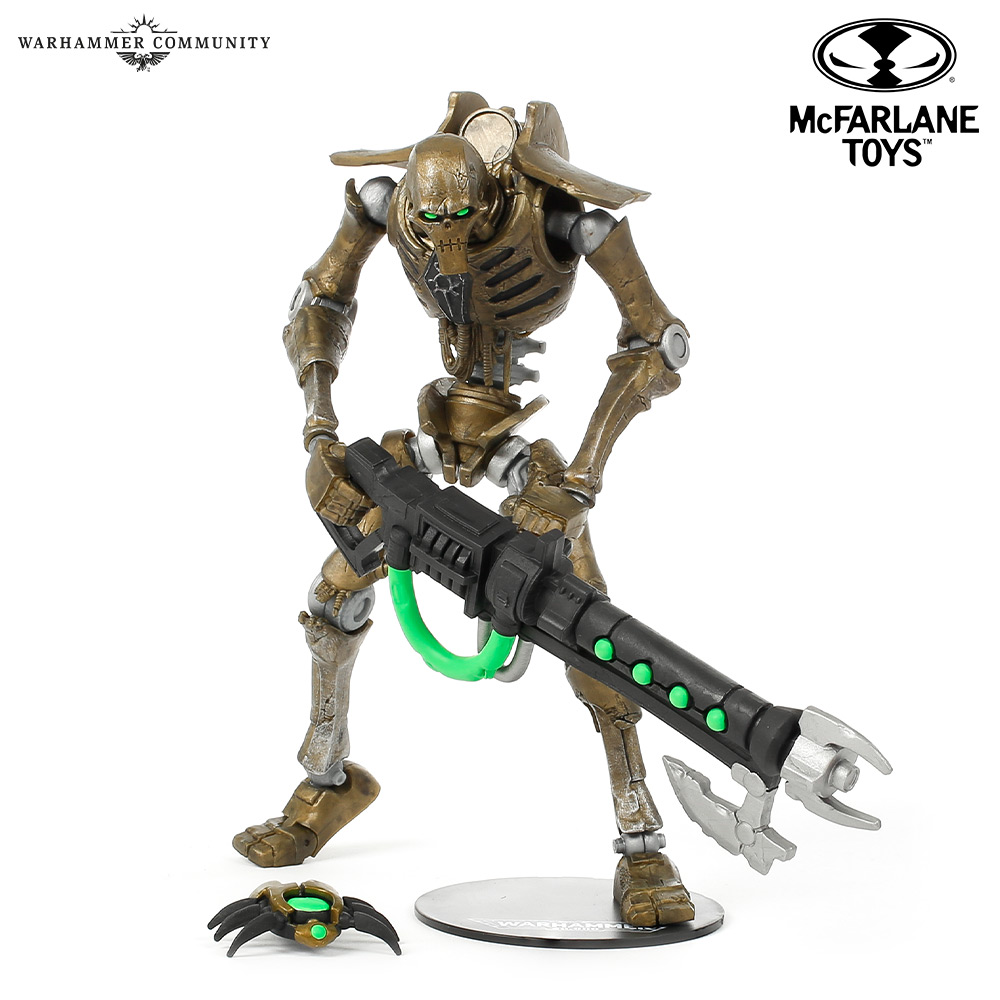 The Adeptus Astartes aren’t about to let the Necrons take over your shelves unopposed, though. They’re sending in this Ultramarines Primaris Assault Intercessor Sergeant – who you might recognise from the Warhammer 40,000 cinematic trailer. 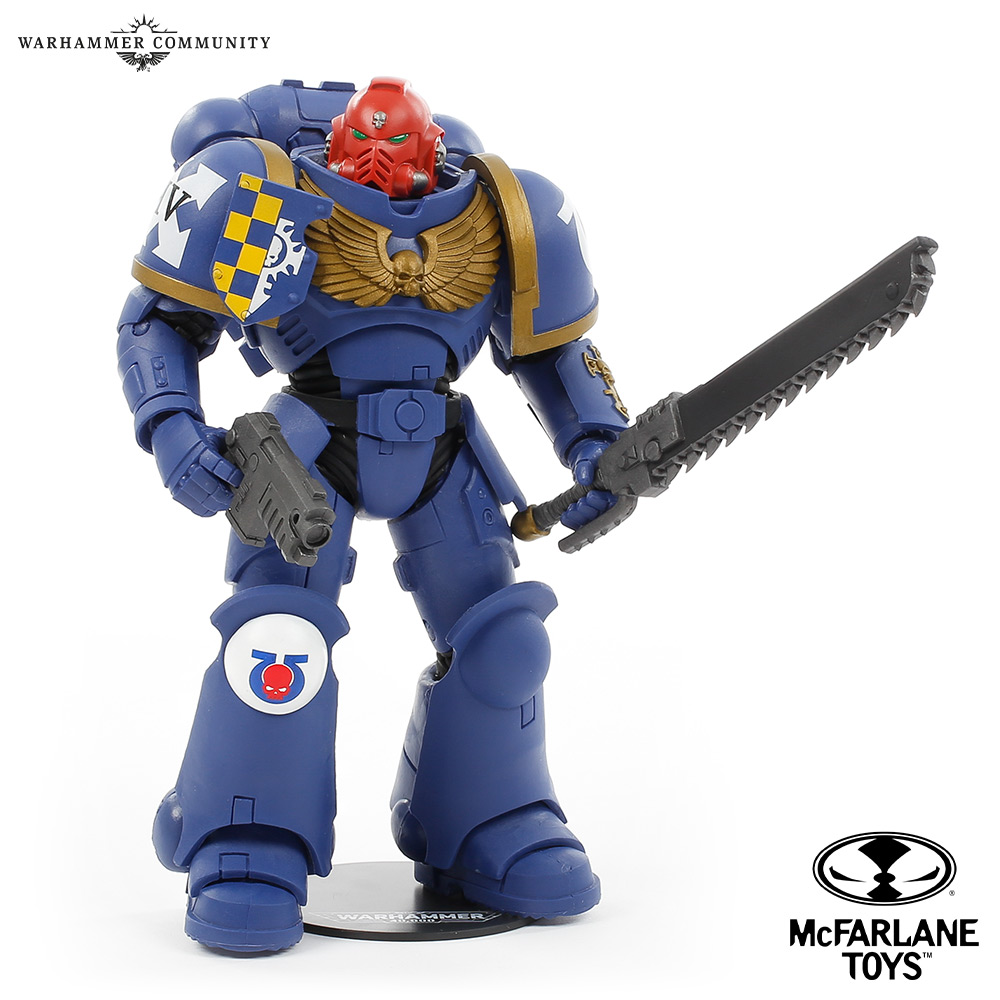 If you fancy painting an action figure of your own, this Intercessor will also be available as an Artist’s Proof, ready to join whichever Chapter you choose! 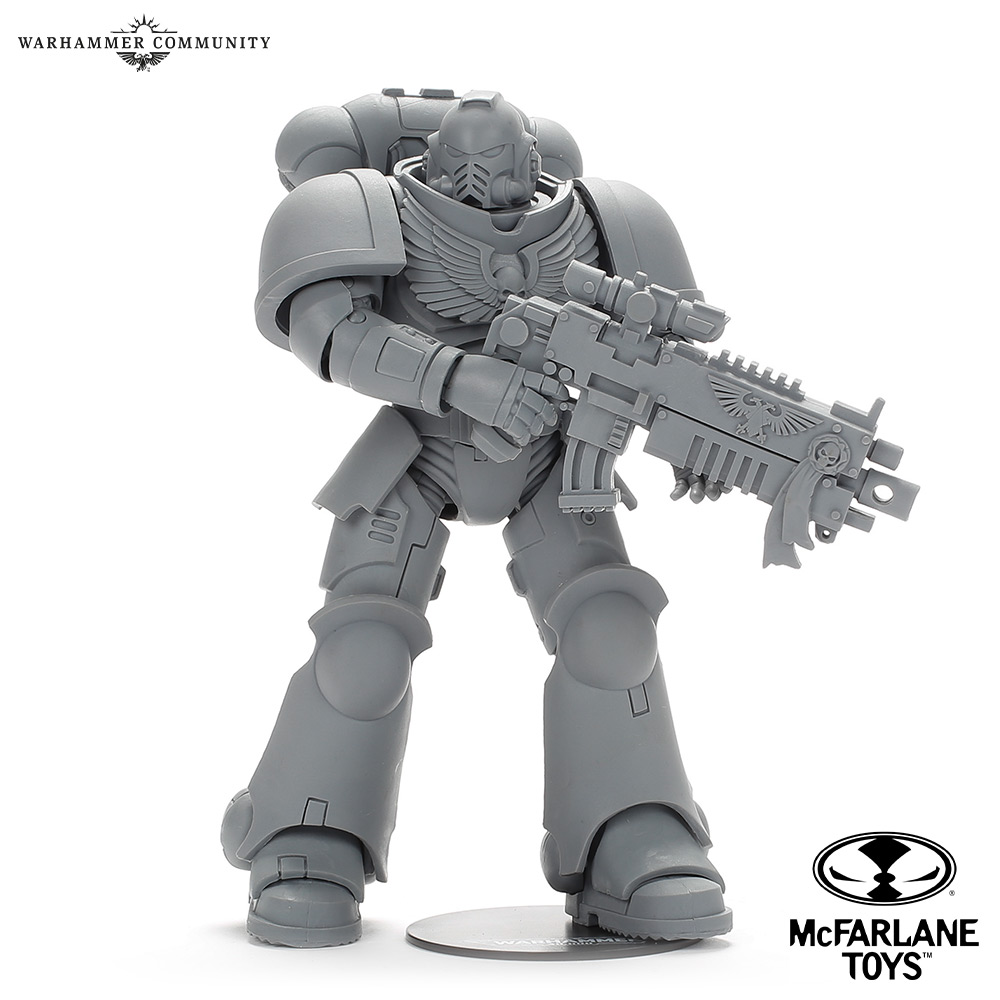 Each of these 7”-scale action figures features over 20 points of articulation. They’ll be available to order for just one week, starting on Saturday, so make sure you set a reminder if you want to grab them.

Fans of the Middle-earth Strategy Battle Game have been clamouring to see some of their favourite characters immortalised in model form for years. Well, now the Personalities of Bree box is here to satisfy them. 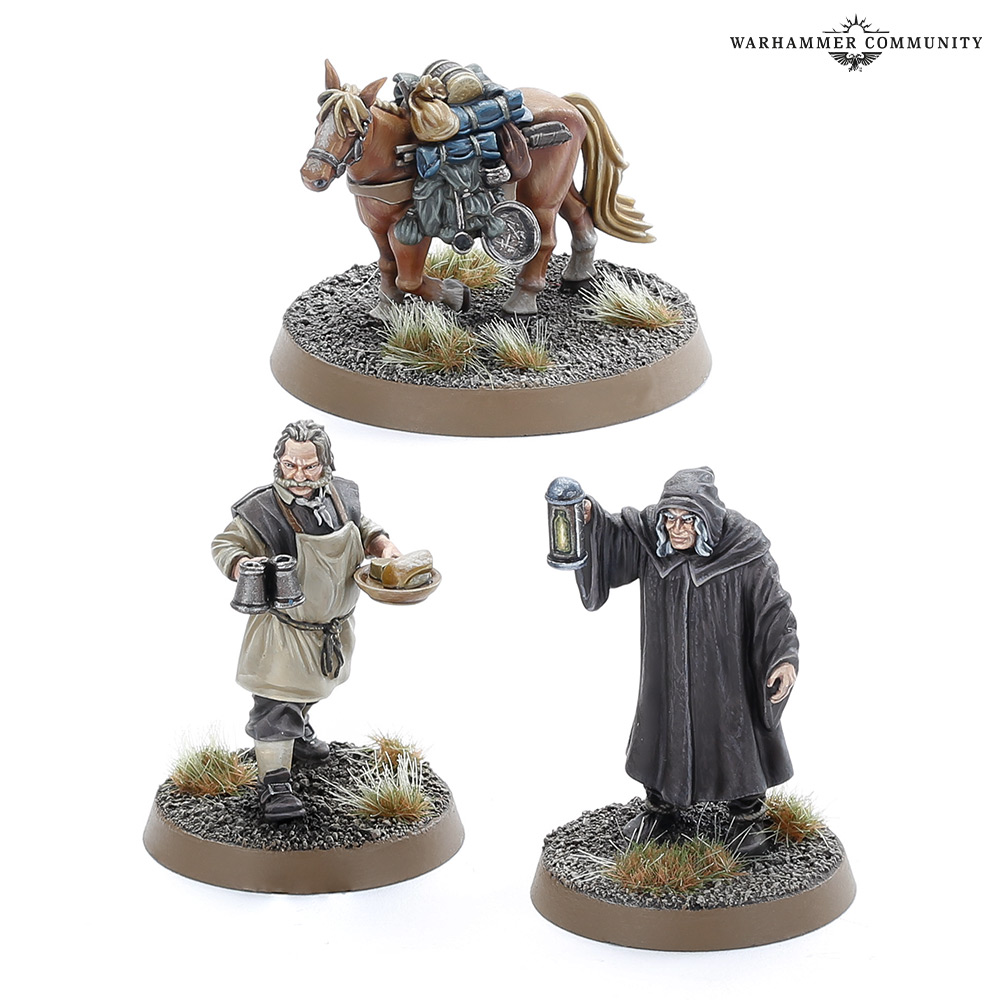 Available from Forge World this Friday, you can soon add Barliman Butterbur, innkeeper of the Prancing Pony, to your Narrative (and Matched Play!) games. Speaking of ponies, you’re looking at none other than Bill the Pony, loyal companion to the Hobbits of the Fellowship. You’ll also find Harry Goatleaf, the Gatekeeper of Bree, in the set, with his signature rain cloak and lantern. 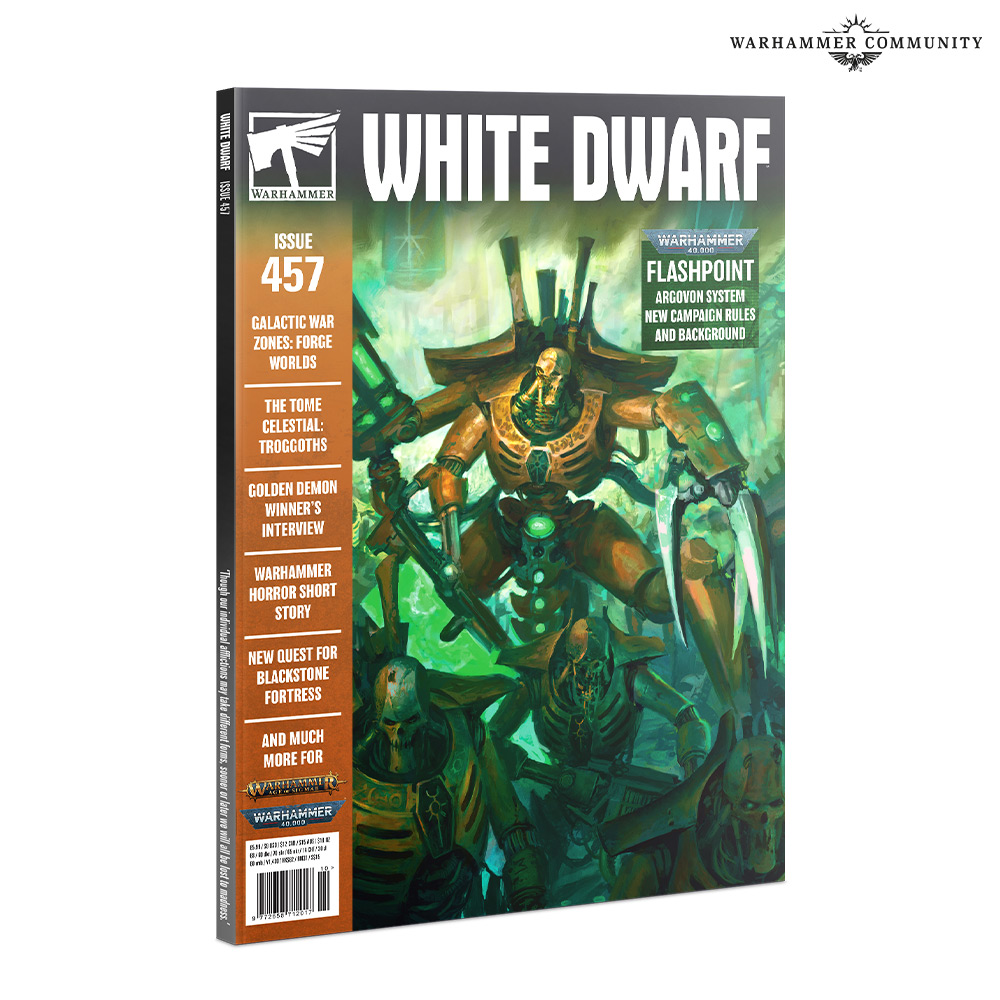 This month sees the introduction of Flashpoints for Warhammer 40,000 – exploring areas of interest within a wider war zone, including expanded background, mini-campaigns, and special rules. You’ll also find great content for Warhammer Age of Sigmar, including a Tome Celestial focus on troggoths, as well as features for Necromunda, Warhammer Quest: Blackstone Fortress (and you thought it was over!), and the Middle-earth Strategy Battle Game.

Looking for a bit more to read this month? No worries, we’ve got you covered. 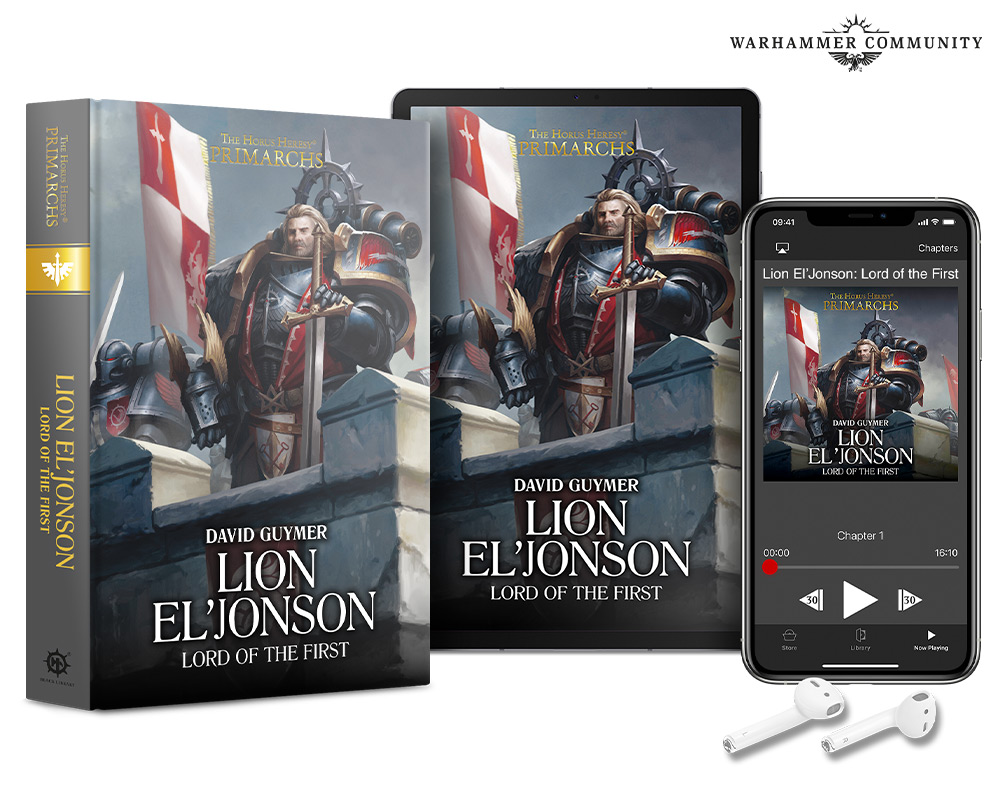 Book 13 of the Primarchs series focuses on Lion El’Jonson, lord of the First Legion – masterfully written by David Guymer. You’ll be able to pre-order it soon in hardback format, plus audiobook and eBook editions.

If you like to plan ahead, you’ll soon be able to order Print on Demand 2021 Calendars featuring Black Library art from the Horus Heresy, Warhammer 40,000, and Warhammer Age of Sigmar! Can you think of anything better than plotting out your holidays, birthday reminders, and plans for galactic or realm-wide domination while gazing upon inspirational, jaw-dropping artwork? Go on – we’ll wait…

Mark your CURRENT calendar for the 10th of October, when these will be available to order.

As with every week, we’ve got loads of great, free content lined up for you on Warhammer TV. Take a peek at the schedule below and pencil in your faves. 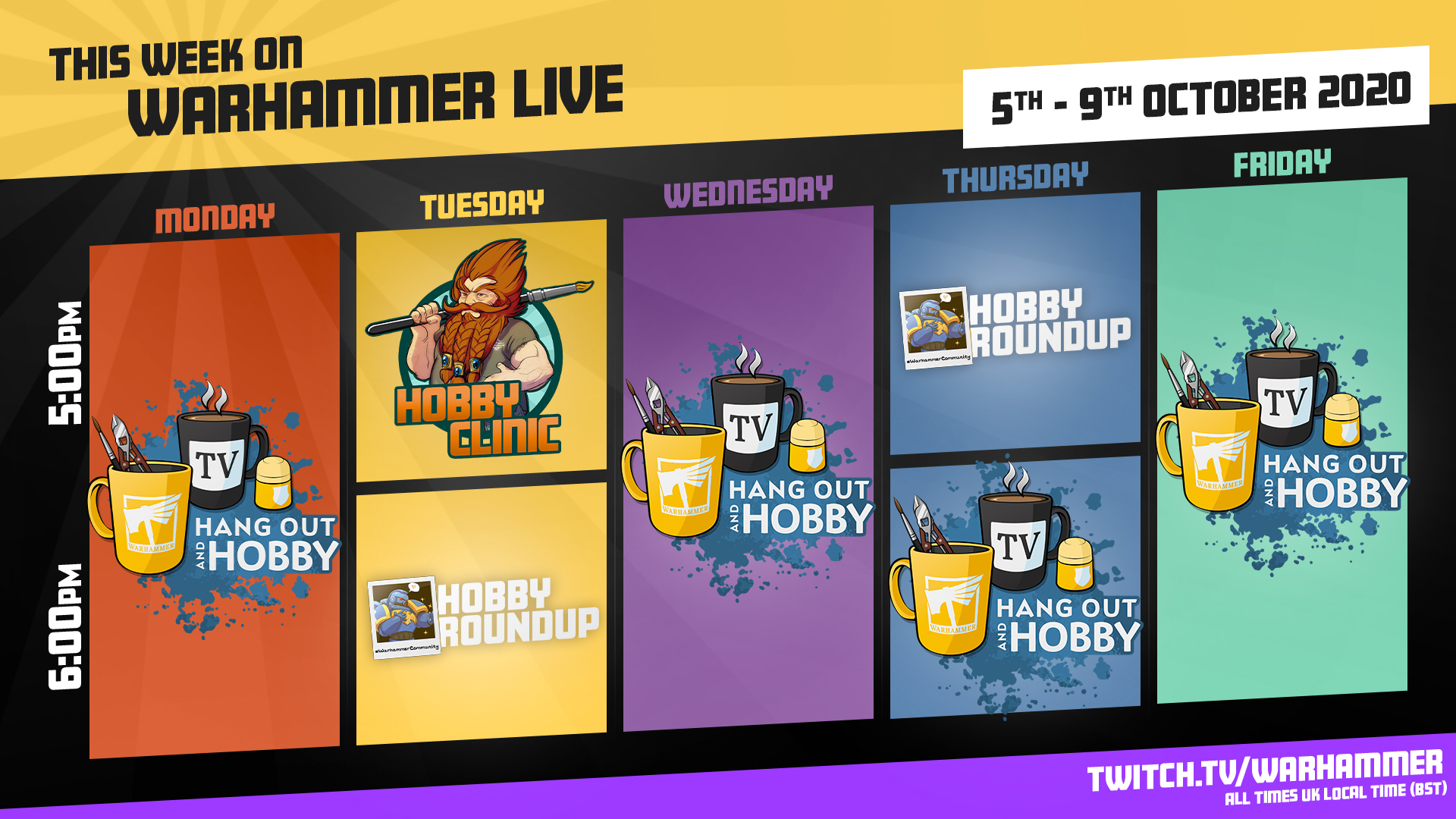 Keep your eyes peeled for exciting articles about the Sons of Behemat, Necrons, and loads more! Follow us on Facebook, Twitter, and Instagram to check out the latest news right in your social media feeds. If you like to get your news delivered straight to your inbox, make sure to sign up for our email newsletter as well!

* If you’re in Australia or New Zealand, the Hexmark Destroyers are biding their time inside a dimensional oubliette. Be patient! Once a translocation solution has been resolved, we’ll give you an update on its impending arrival.
** Just as with the Hexmark Destroyer, White Dwarf is unfortunately delayed in Australia and New Zealand. Keep an eye out for more information.

Check out our weekly look ahead at the next batch of upcoming pre-orders.

We’d like to wish you a very merry Christmas from all of us here in the Warhammer Community team. Here’s …