Do you like smaller games of Warhammer 40,000? Would you like a game that you can finish in your lunch break? Looking for a quick way to try out a new army? Combat Patrol is a fun and easy way to achieve all of these and today, we’re taking a look at this exciting new way to fight battles in the 41st Millennium.

What is Combat Patrol?

This is the new way to play small games of Warhammer 40,000. It’s for armies of a combined total Power Level of 50 (or around 25 power each)*. Each player will get 3CP each to start the game with and an additional 1CP each turn, and Combat Patrols are played on a battlefield of at least 44” x 30” – meaning that you can easily play Warhammer 40,000 on a dining table (or a school desk or almost anywhere)! If you’re a Kill Team fan, this board size is the same as two Kill Zones combined – very compact! 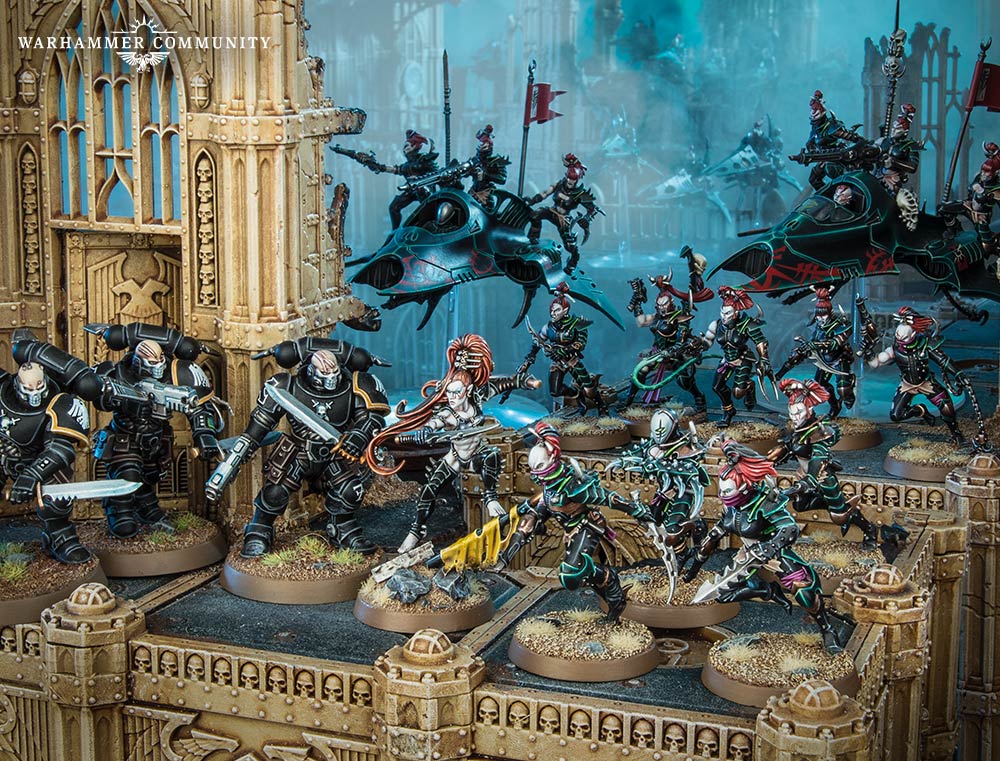 Why is Combat Patrol Awesome?

Games of Combat Patrol will only take around an hour to play, making them an amazing option if you don’t have the time for a larger game. It also means that you can get MORE games of Warhammer 40,000 into a single gaming session. You could hold your own league or ladder campaign in just one evening! Since you only need a small army, a Combat Patrol force is also a great milestone to aim for when beginning a new Faction.**

There are also specific missions for Combat Patrol and they have goals that are more suitable for this size of wargaming.*** For example, let’s take a look at the Incisive Attack mission. 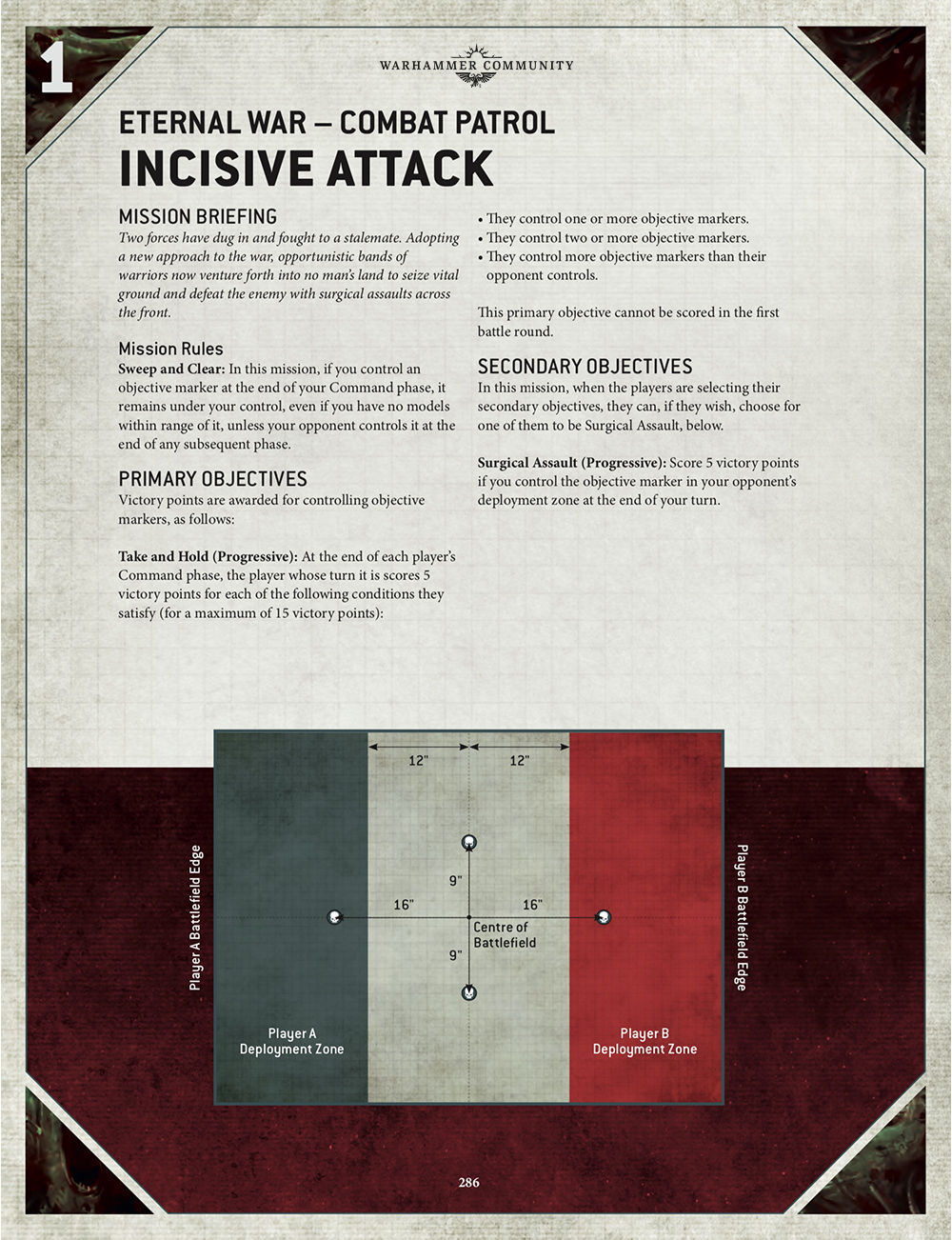 So, do you focus on grabbing your opponent’s objective marker or do you try to keep them off yours? That’s for you to decide!**** There are a host of new missions that can be played for Combat Patrol, each with their own objectives and special rules, meaning that even these smaller games will give your brain a tactical workout. The new Warhammer 40,000 features bespoke Combat Patrol missions both for matched play and for narrative Crusade games, and we can’t wait to try them all out.

An army for Combat Patrol is based on a single Patrol Detachment,***** which gives you a nice amount of flexibility and choice for the size of battle.

We got so excited about Combat Patrol that we couldn’t help but come up with a few army lists, all coming in at around a Power Level of 25. We’re starting with a couple that you can make with the models in the new Indomitus boxed set. 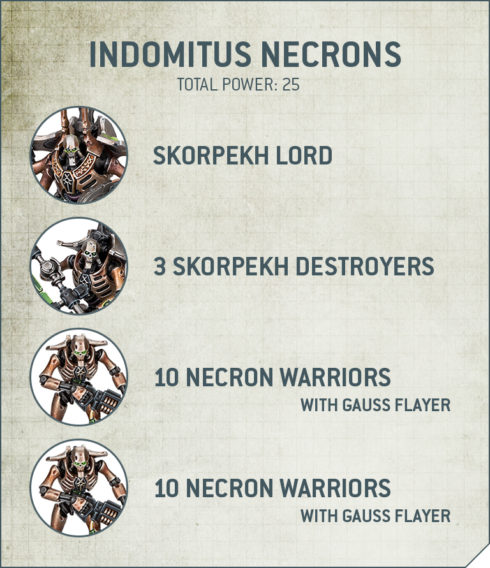 The Skorpekh Lord and its Destroyer pals can advance, cutting their way through any enemy unit foolish enough to get close, while the Necrons Warriors follow behind, supporting with volleys of deadly gauss fire. 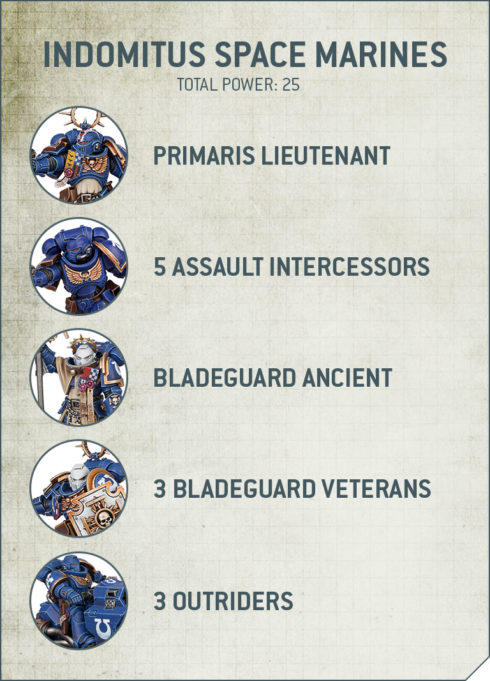 The Outriders give you speed, and the Bladeguard Veterans give you a real punch in combat. Support their assault by charging your Assault Intercessors at the same time, and give everything buffs from the aura abilities of your Primaris Lieutenant and Bladeguard Ancient.

The next three armies are all built around Start Collecting! boxes, which are all a great way to start any new force. Many of them contain enough models for you to build a Combat Patrol force right away. 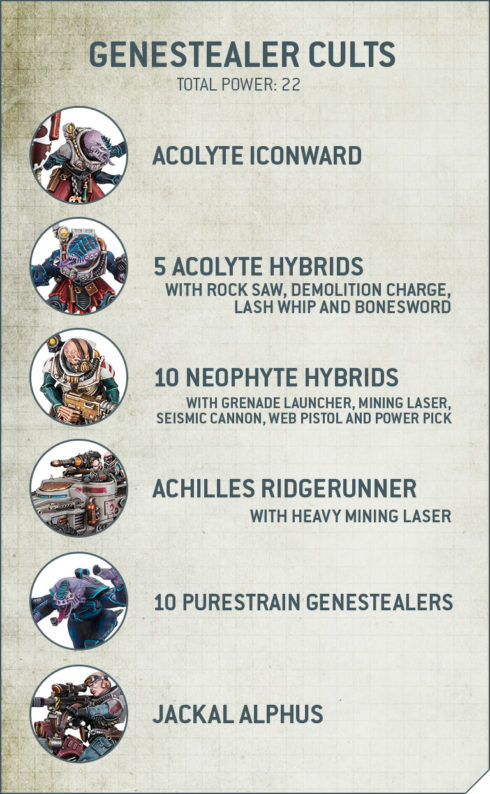 We’ve added a Jackal Alphus and some Purestrain Genestealers to the Start Collecting! Genestealer Cults box. The Genestealers add some close-combat bite while the Alphus adds his expert precision to the already impressive firepower of the Neophytes and the Achilles Ridgerunner. 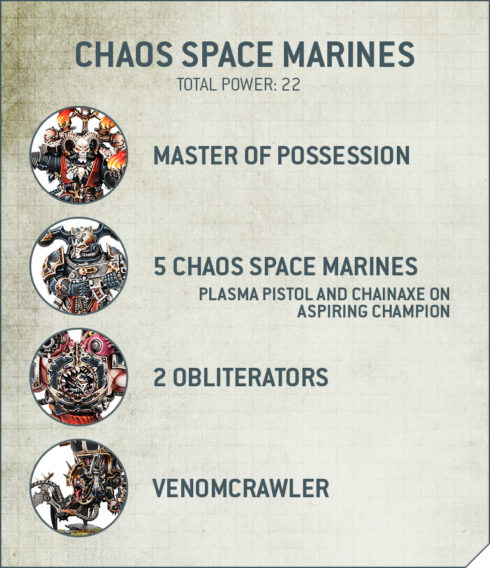 This list can be made from the Start Collecting! Chaos Space Marines box. The Venomcrawler offers incredible mobility. Back it up with the firepower from the Obliterator and the Chaos Space Marines, and use the Master of Possession to cast psychic powers to really Smite your opposition. 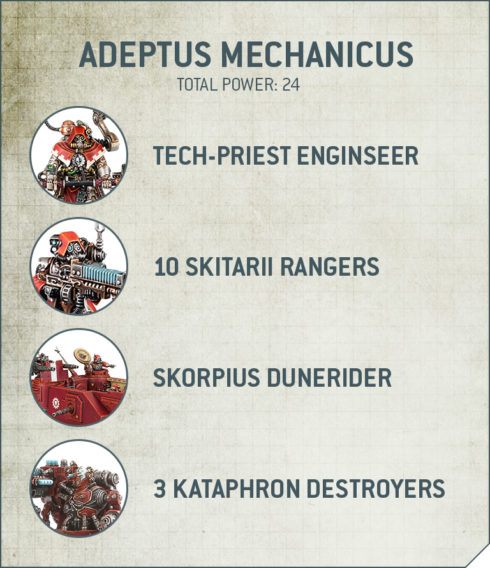 We’ve added some Kataphron Destroyers to the Start Collecting! Adeptus Mechanicus box, adding a choice of serious firepower to supplement the Skitarii Rangers’ galvanic rifles. Able to shoot their heavy weapons on the move without penalty, the Kataphrons can bombard the enemy with fire while the Skitarii advance in their Skorpius Dunerider to capture objectives.

These are just a few ideas to get you started with Combat Patrol, and all are great foundations to build a bigger army from. Make sure that you join us over on our Facebook page to let us know what army you plan on running in these new smaller games of Warhammer 40,000.

* Or if you’d rather play with points, that’s around 500 points each.
** As if we need an excuse!
*** Although, as always, wiping out your enemy will certainly help.
**** Or do you just run headlong at the ones in no man’s land and have a massive dust-up? We know what the Orks would do.
***** Except for Imperial Knights and Chaos Knights – they can only fit in a Super-heavy Detachment, but they can still take part in Combat Patrols.

Taking Command of Your Points!

So what’s all this about changes to Command points in your games of Warhammer 40,000? Find out here!

The Return of Combat Cards!

Warhammer fans of, let’s just say ‘a certain vintage’, may remember Combat Cards. A fun card game that you could …

Battle Sisters on the Battlefield – Part 1