For ten thousand years, the world of Cadia was a lynchpin in the Imperium’s defences… until it wasn’t. The Despoiler’s Thirteenth Black Crusade devastated the fortress world and ushered in the Noctis Aeterna and the Great Rift. Now a shattered husk, Cadia is no longer the key battleground it once was, but it’s still a hotly contested war zone. Let’s explore why. 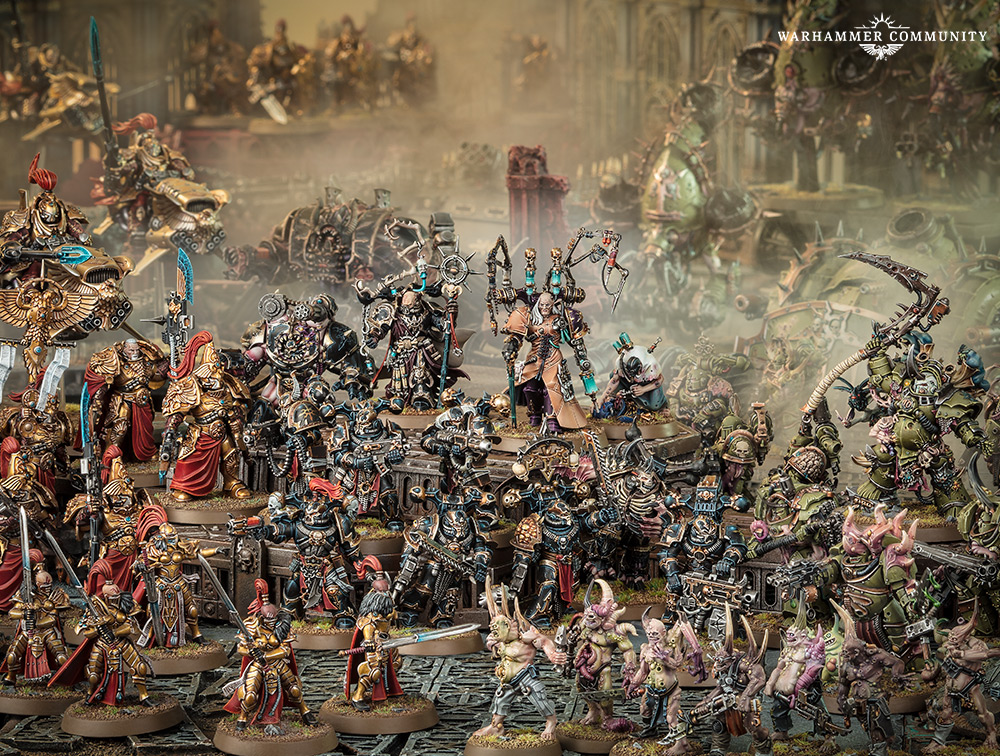 A Brief History of Cadia

Since the earliest days of the Imperium, Cadia has stood in defence of the Emperor’s realm. Rumour has it that it was on Cadia that Lorgar, the first of the Primarchs to fall to Chaos, began his descent into darkness. What is known for sure is that when the expeditionary fleets first came to Cadia, they found something of great interest – the pylons. 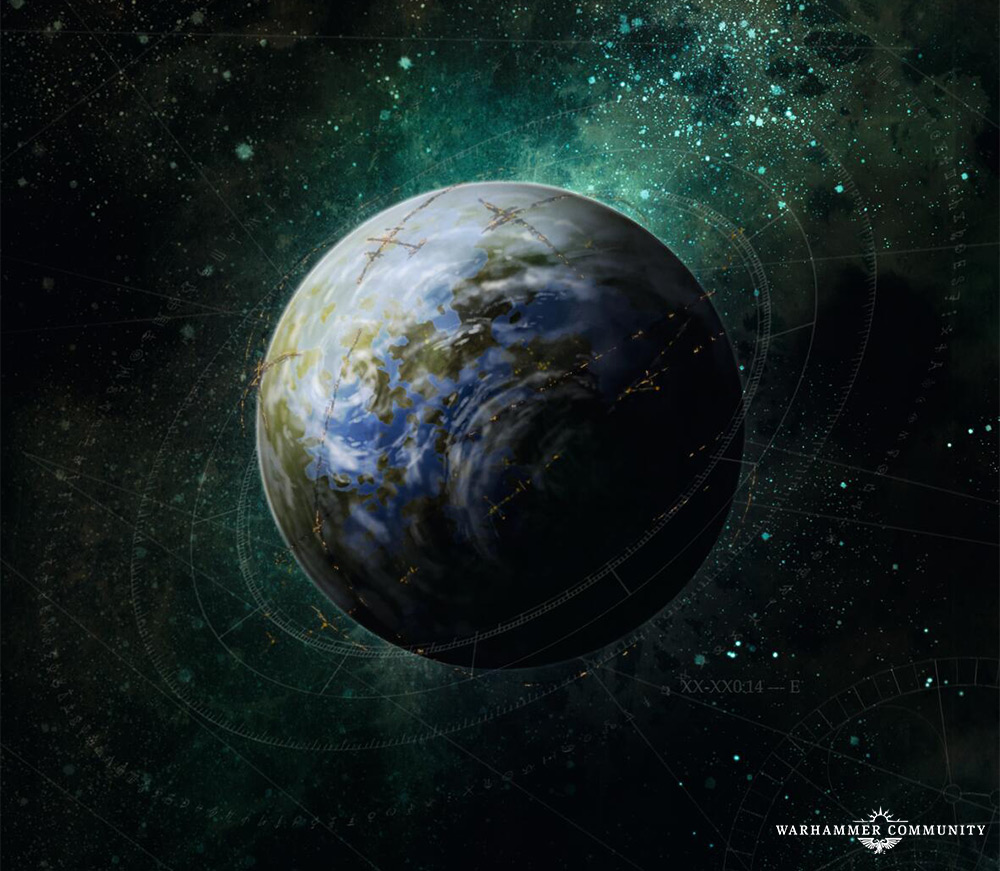 Cadia’s pylons were great obelisks made of blackstone, a mysterious substance also known as noctilith, that interacts with the warp. In some instances, it calms and even nullifies the warp’s energies, and greatly empowers them in others. The Cadian pylons seemed to have the former effect, creating the stable route out of the roiling warp rift known as the Eye of Terror. Such was the power of the pylons that the Adeptus Mechanicus began studying them. Samples of blackstone were even returned to Terra to reinforce the psychic wards around the Imperial Palace.

When the Traitor Legions fled to the Eye during the Scouring, it became clear that the passage created by the pylons would be key to any further assaults they might make, and so Cadia was turned into a fortress, second only to Terra itself. For ten millennia it endured… until the Thirteenth Black Crusade. 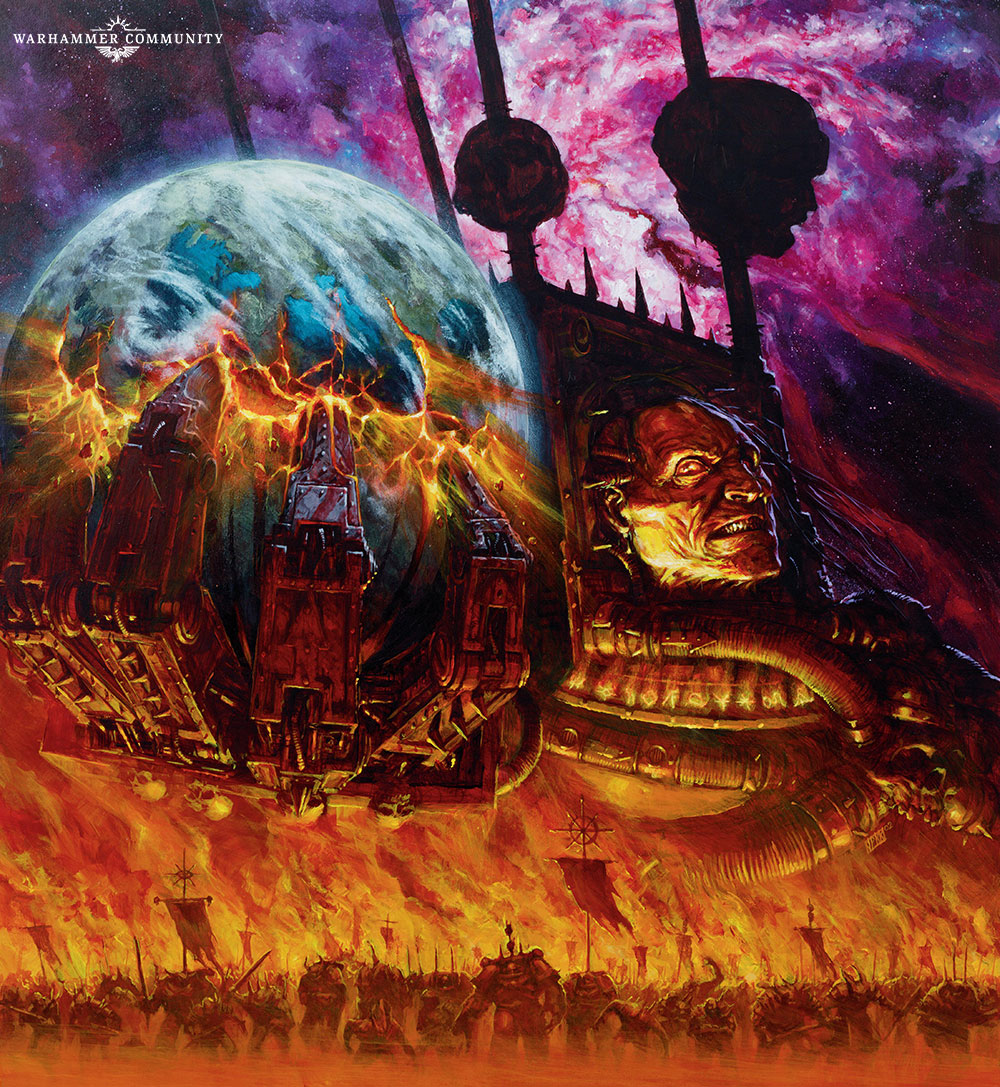 Even as Abaddon launched a cataclysmic assault on the defenders of Cadia, Archmagos Belisarius Cawl, aided by unlikely xenos allies, activated the full force of the pylon network, cutting the forces of Chaos off from the power of the warp. Faced with a final defeat, the Despoiler unleashed his ultimate weapon, crashing the badly damaged Blackstone Fortress Will of Eternity, captured during the Gothic War nearly a millennium before, into Cadia’s surface.

The immense impact shook Cadia loose from its orbit and shattered the world, destroying the pylon network. With this blow, Abaddon’s work across a dozen previous Black Crusades was completed. The destruction of Cadia built upon ten thousand years of unstitching the blackstone network across the galaxy. In the aftermath, the Great Rift formed, the galaxy changed, and Cadia was forever damned. 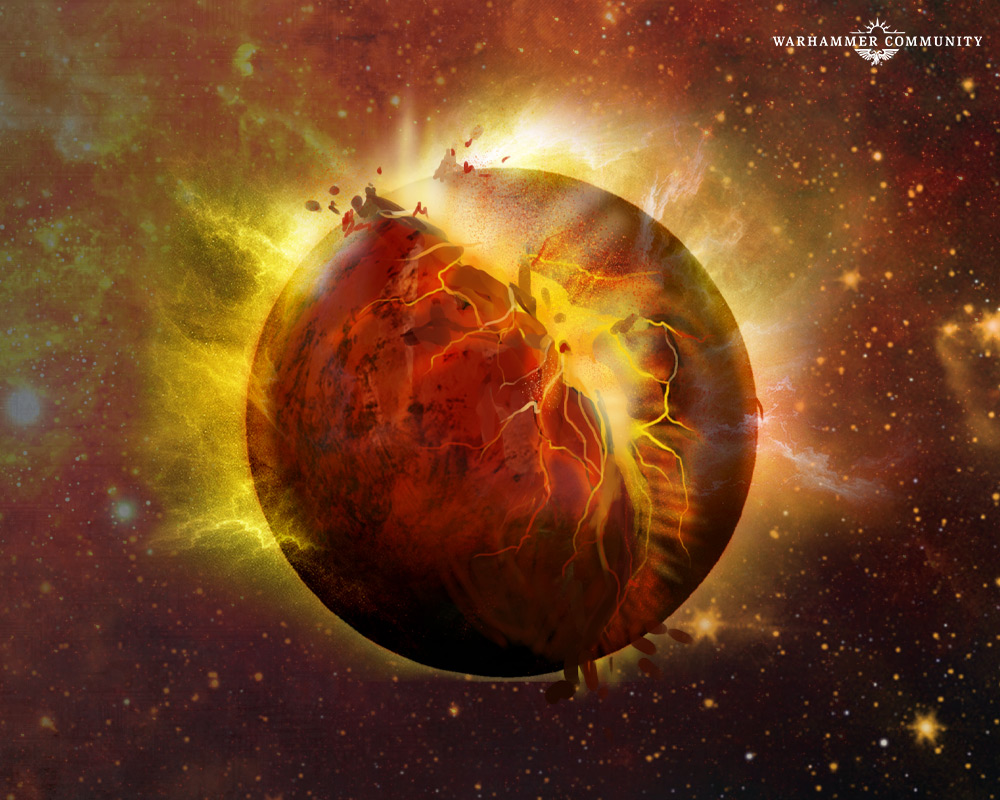 The once-proud fortress world is now broken and devastated. Its great forests are ashes, its cities shattered ruins, and with the expansion of the Eye of Terror, it has become a place of unspeakable horrors. Of the billions of soldiers who once defended the planet, mere millions survived to fight on. Those brave few refuse to abandon their post and have reinforced the surrounding worlds in the Cadian system, alongside the neighbouring Agripinaa and Belis Corona systems. 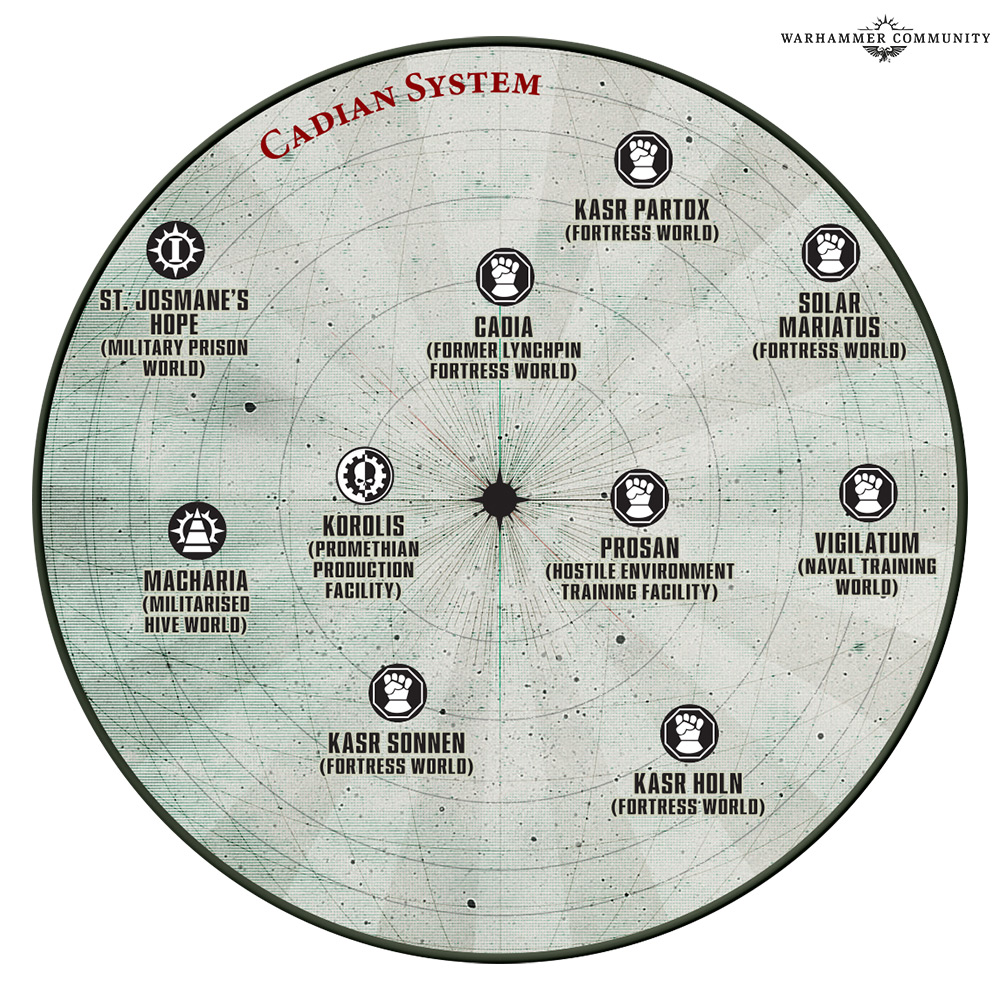 War Zone Cadia remains beset. As well as the Traitor Legions of the Eye and the daemonic hordes that manifest from the warp, foes have arrived from elsewhere. The Shriven, a Black Legion warband who once fought for the Imperium as the Brazen Drakes, are one such threat, amplified by their alliance with Fabius Bile. Corian, master of the Shriven, wants to carve out an empire of his own in the war zone, and Bile has his own esoteric goals… 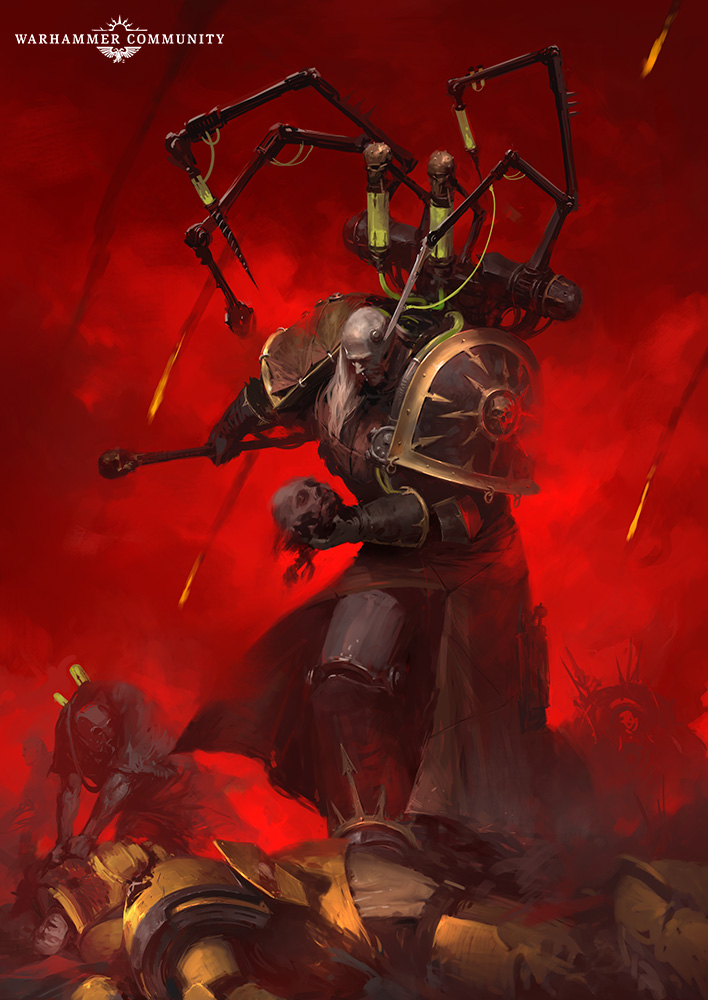 Once again, the forces of Chaos threaten to tear the Cadian region apart – this time, as they fight amongst themselves. Typhus and the Death Guard pursue Bile, intent on taking back a valuable artefact he stole from them – and the Imperial forces of War Zone Cadia are caught in the middle of the fight. Even the arrival of a cadre of Talons of the Emperor may not be enough to prevent the plague-touched servants of Nurgle and the Shriven, enhanced by Bile’s foul alchemy, from devastating the Imperium’s hard-won gains.

You can find out what happens next in Psychic Awakening: War of the Spider, which will be available to pre-order tomorrow. You can also discover more about the fall of the Brazen Drakes and Fabius Bile’s plans in the series of free Psychic Awakening short stories – check them out!

Cadia Stands… On Your Shelves

A stalwart Cadian Officer is coming to a display shelf near you. Find out how and when you can pick up this incredible new action figure.

The Regimental Standard – Welcome Back to Cadia!

Welcome home, Guardsman. Please ignore the fact that everything is on fire.

The Regimental Standard: Perfidy With Wings

An essential guide to the aircraft of the vile T’au.