One of the eternal questions whenever fans of the Warhammer 40,000 universe gather is who would win in a fight between Primarchs. We’ve seen a fair few clashes between these demigod brothers in the Horus Heresy novel series, but we decided that, since we have tabletop rules and gorgeous models for almost all of them, we’d simply fight it out and see! Over the next three days, we’ll be pitting Primarchs against one another and discovering who comes out on top – and we’re starting today with the Loyalists.

Being generally civilised and friendly sorts (when they’re not out conquering the galaxy and wiping out alien threats), we reckoned the Loyalists would agree to some ground rules before they began. For the purposes of this contest, they’ll fight one-on-one, randomly paired, with the winner of each bout moving on to face another champion. Last demigod standing is the winner. They’re going to stick to melee – no shooting or charging. And they might stop for cups of tea at half-time. With the rules agreed and the battle arena readied, we got to rolling dice!

Oh, one more thing – you might notice there are only eight of the nine loyal sons of the Emperor represented here. Jaghatai Khan was off on the fringes of the Imperium and couldn’t be located for the tournament – just like him, eh?* 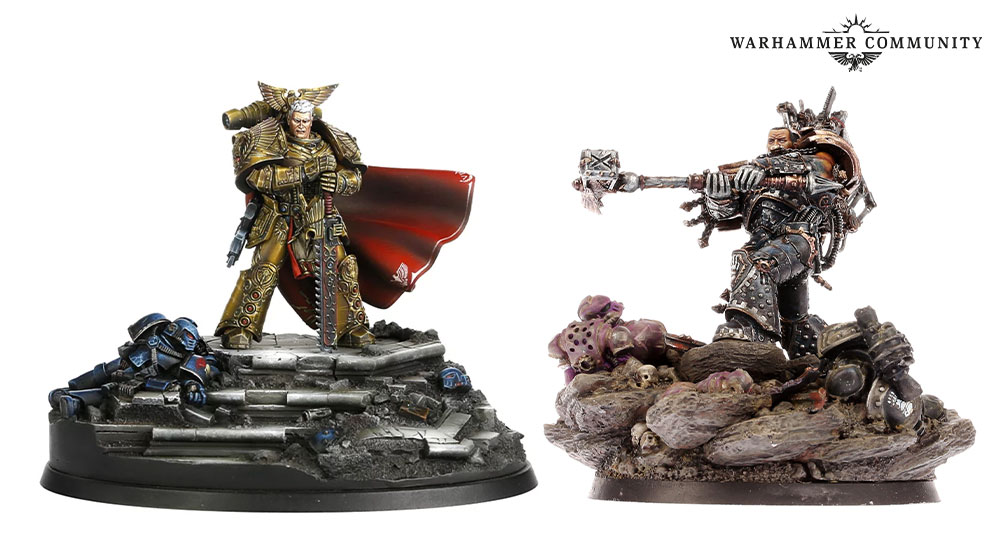 Dorn and Ferrus were pretty evenly matched, both stalwart builders and defenders. Storm’s Teeth and Forgebreaker clashed in a blaze of sparks as they fought to a standstill over many rounds. Finally, Ferrus’ additional attack from his servo-arm punched through Dorn’s defences, and the Praetorian knelt before the Gorgon, sending Ferrus Manus to Round 2! Must have been nice for him to win a fight against a fellow Primarch for a change… Maybe because he kept his head this time. (Too soon?) 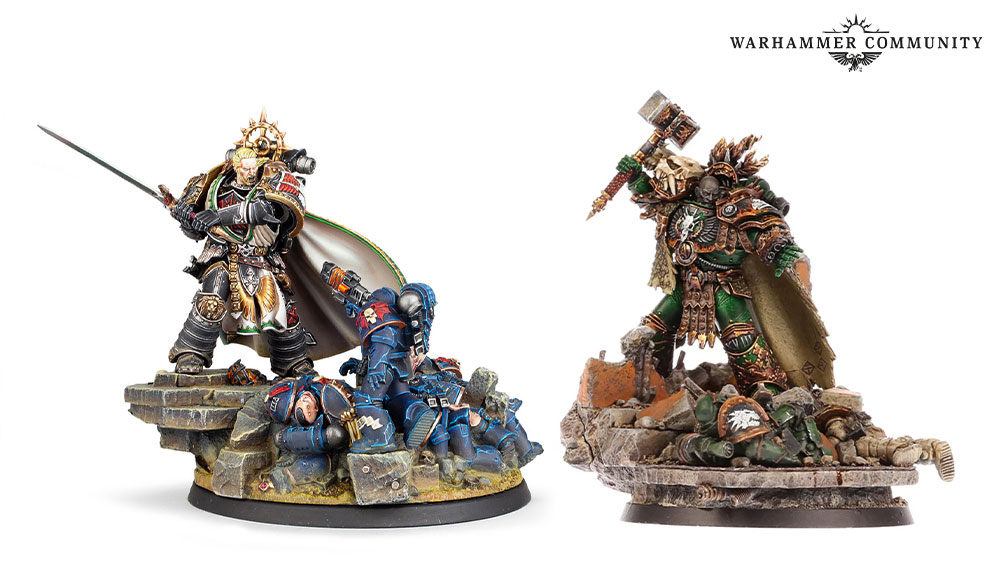 An expert duellist against a brawler with a big hammer – this was going to be fun. The battle started pretty well for Vulkan – despite taking an early wound from the Lion Sword, he struck back with Dawnbringer and dealt some heavy damage to his brother. This proved to be a mistake. The extra attacks Jonson earned from The Lion’s Choler, coupled with his sword’s Fleshbane, proved just too much for Vulkan to take, and the Promethean Fire was snuffed out. Sure, he’ll come back – it’s kinda his thing – but for now, the Lion moves forward. 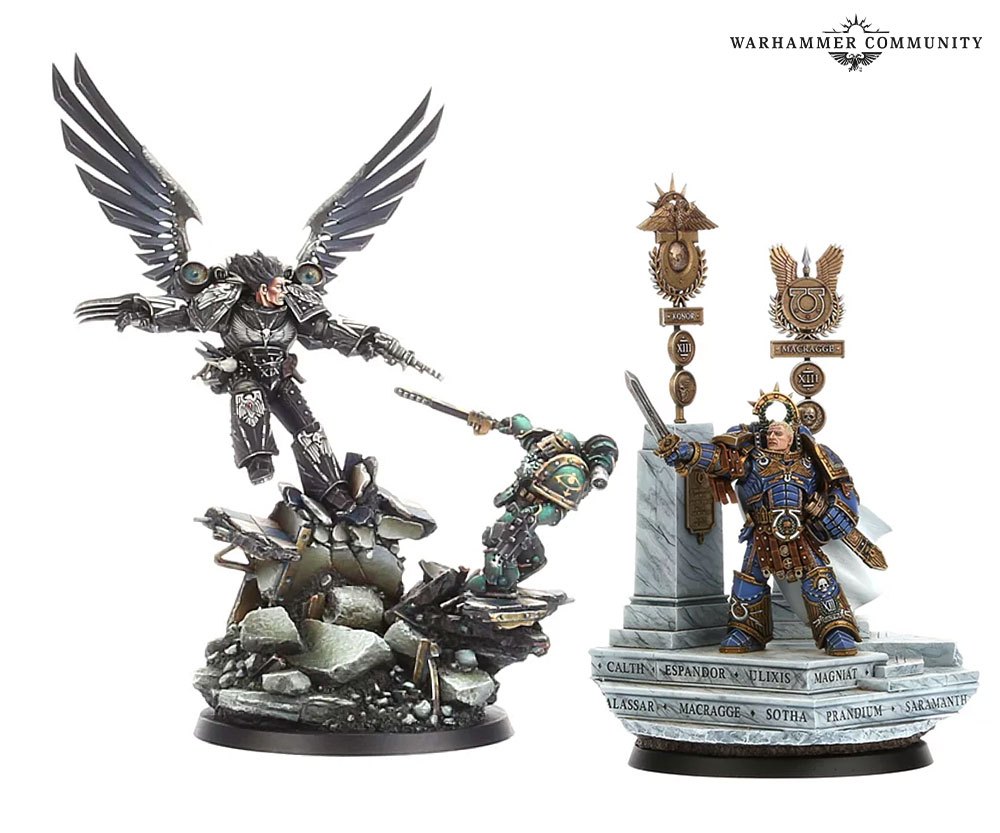 Corax struck first (as is his wont), his various weapons lashing out with a staggering nine attacks thanks to his Scourge fighting style – but Guilliman’s Armour of Reason stopped them all. The Master of Ultramar returned the attack, to no avail. Corax chose to Shadow-walk and slipped a blade through Guilliman’s defences, which the Ultramarines Primarch quickly recovered from through It Will Not Die. Evenly matched, the pair fought to a standstill for more than 12 ROUNDS, neither one giving an inch of ground, dice rolls refusing to favour one over the other… before Guilliman, ever the peacemaker and statesman, bowed out muttering something under his breath that sounded a bit like “…got better things to do. There’s an Imperium to be run…”. Corvus immediately took advantage and pushed Roboute out of the competition with one last ambush. Now they’re just arguing over whether Guilliman ‘let him win’ or if Corax tired him into submission. 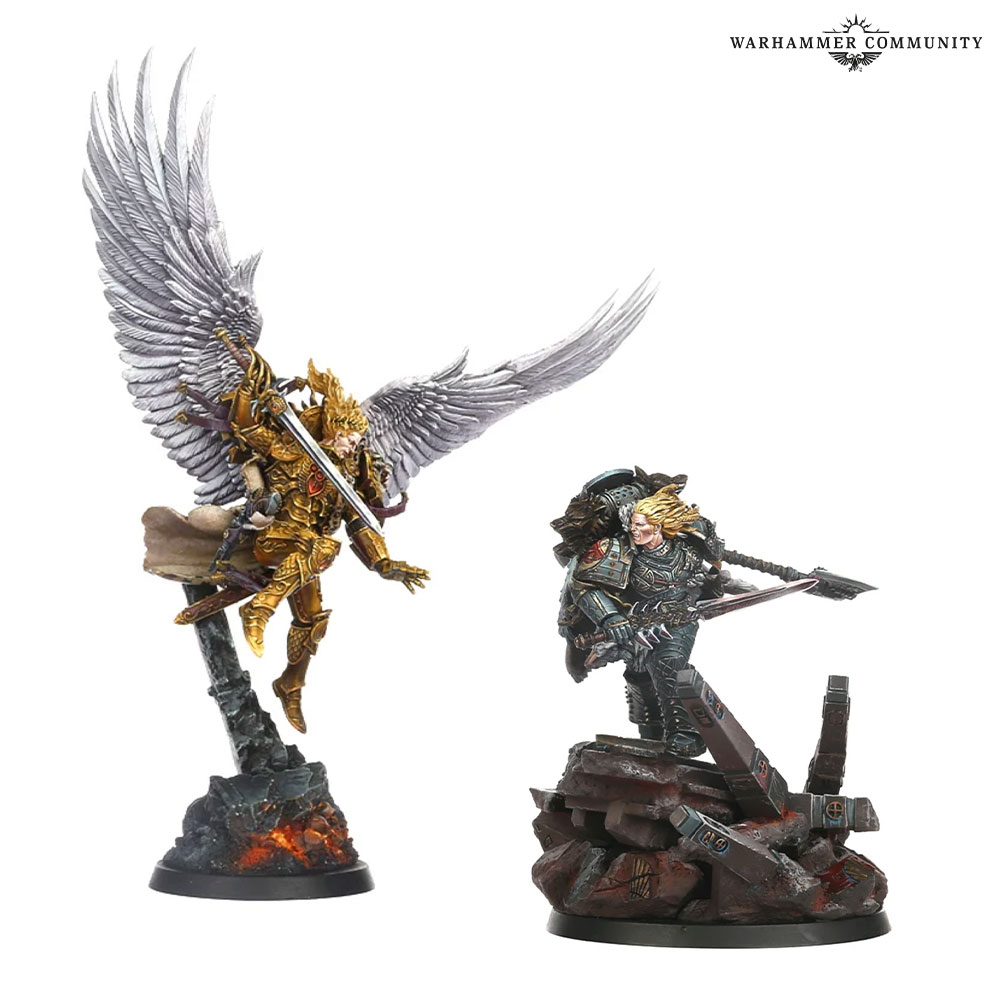 The Executioner vs the Angel! Despite their evenly matched profiles, Sanguinius struck first thanks to his Sire of the Blood Angels rule, and swung the Blade Encarmine, dealing two wounds to the Wolf King! The Axe of Helwinter responded, dealing two back! From this point, the advantage went Russ’ way, the creeping frost from his armour making it harder for Sanguinius to hit. After just a couple of rounds, the Angel’s wings had been clipped, and Russ was on his way to the next round. 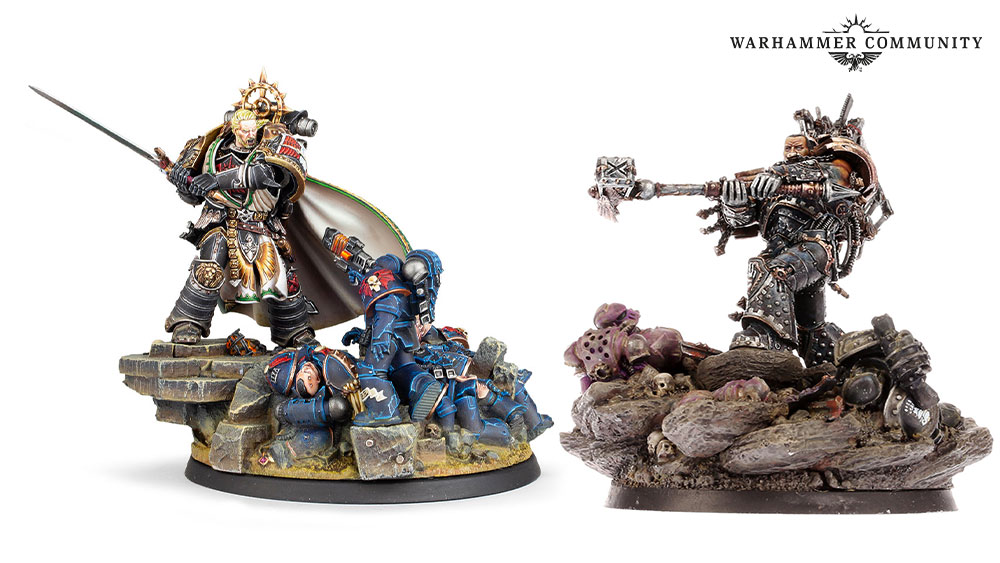 Robbed of the Initiative advantage he’d held against Dorn, Ferrus Manus struggled against the expert swordsmanship of the First Primarch. Though Forgebreaker struck some rattling blows against the Lion’s armour, they only infuriated Jonson, and eventually the Lion Sword and knightly prowess saw the Dark Angels Primarch take his place in the final, while Ferrus just felt lucky to still be in one piece. 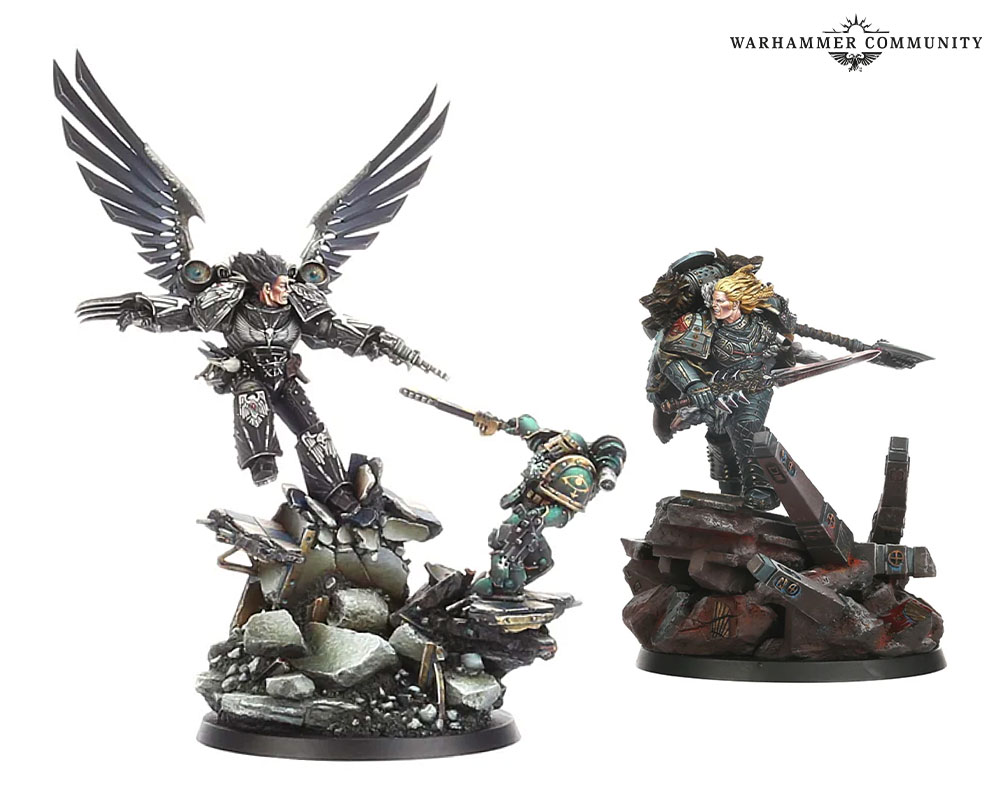 Russ’ higher Weapon Skill and the aura of frost from the Armour Elavagar put Corax at a marked disadvantage going into this bout – even his Shadow-walk fighting style wouldn’t put them on an even keel. As he struggled to land any blows, Russ steadily hacked away with the Axe of Helwinter, and before long, the Ravenlord was grounded and the Wolf King flying high as he prepared to face his old rival… 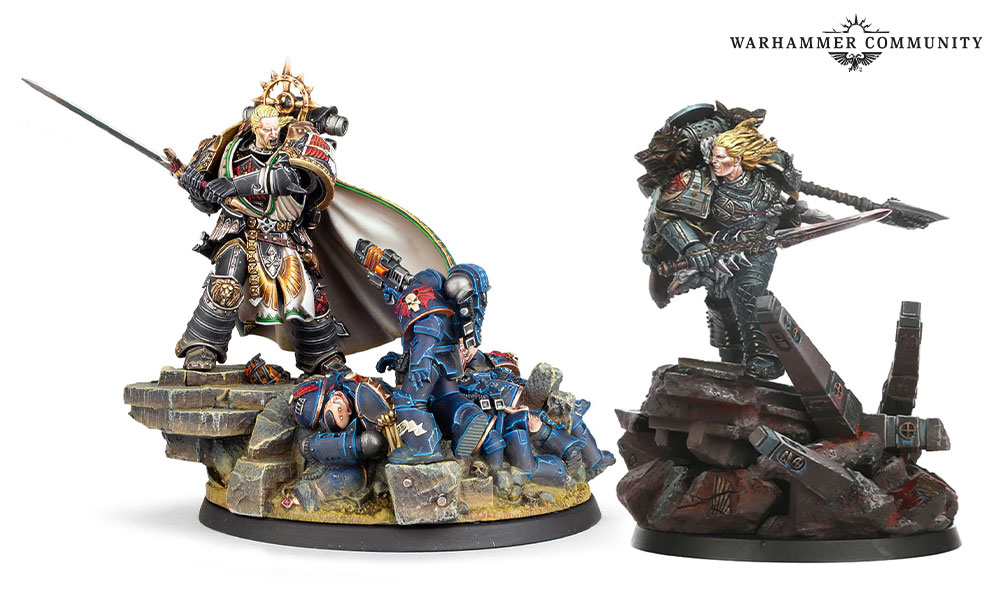 The Lion and the Wolf face one another once again. These most bitter of rivals circled each other warily and Jonson struck – only to miss completely despite his Absolute Focus ignoring the penalty from Russ’ armour! So much for being the best duellist among the Primarchs… Russ’ return blow caused four wounds… all saved. The next couple of rounds saw them chip wounds from each other, and The Lion’s Choler kicked in. Now more evenly matched than before, the pair continued to hack away at one another, until eventually the Lion knocked off Russ’ last wound. With equal Initiative, it was possible that Russ could bring his opponent low as well as his last act… but the Axe of Helwinter glanced off the Leonine Panoply (thanks to a re-rolled invulnerable save!) leaving Lion El’Jonson the Loyalist champion! 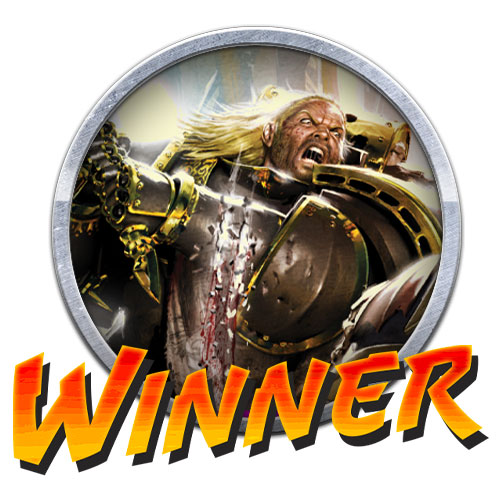 And there you have it! The Lion will go through to the Grand Final, facing off against the champion of the Traitors. Who will that be? Join us tomorrow to find out. In the meantime, head to Black Library’s Horus Heresy page to find loads of stories containing Primarch clashes. You might particularly want to check out Chris Wraight’s Leman Russ: The Great Wolf to see how the feud between Russ and Jonson started in the first place!

* This has absolutely nothing at all to do with needing even numbers for a bracketed competition.

Fans of the Horus Heresy are in for a treat today, as the latest campaign book from the Age of …

Age of Darkness – Primarchs at War

During the dark days of the Horus Heresy, the Primarchs themselves bestrode the battlefields! With Sanguinius and his special edition …

The Loyalists have fought, and the Traitors too. One of each remains standing. Time to discover which Primarch is mightiest…