Imperial Navy Aces and T’au Kor’La* alike will want to strap in with a full five-point harness for this month’s Flight Plan. We’ve got a couple more model previews for you, another free scenario, and a taste of some the new T’au Empire background material you’ll find in the upcoming Taros Air War Campaign Book. Kick the chocks away and prep for launch! 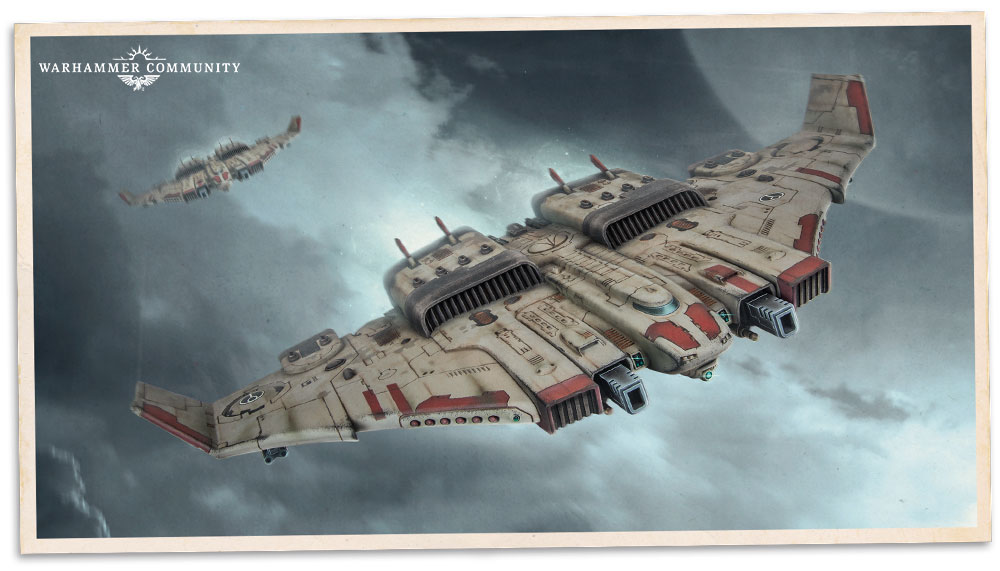 Blips on the Radar

We’ll be checking out another couple of aircraft today, one from the Imperial Navy and the other from the T’au Air Caste. The first one might not be what you expect, but you’ll fall in love with it anyway. 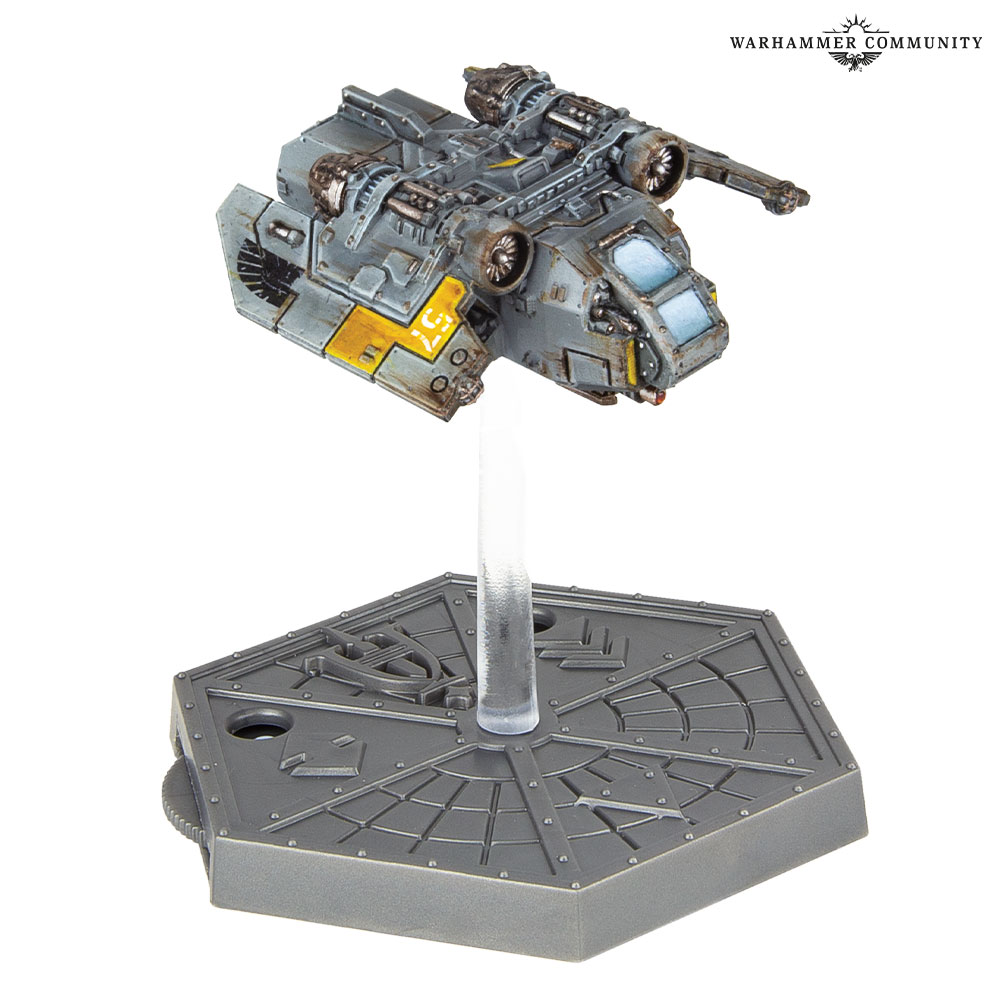 Affectionately called “the Little Pig” because of both its distinctive shape and stubborn machine spirit, the Arvus Lighter is a true workhorse of the Imperial Navy. It’s armoured, but unarmed – you’ll want to protect them while they ferry personnel and equipment into and out of hotly contested war zones. On the other hand, they can quickly exit the atmosphere once the job is done… 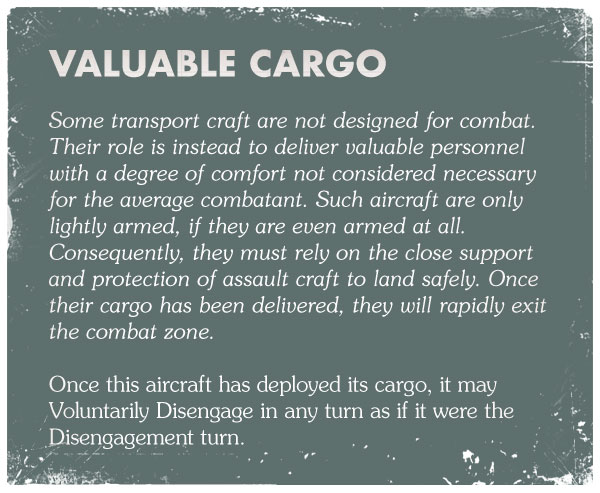 This is the second finely detailed Forge World resin model we’ve featured for Aeronautica Imperialis, and the recognisable silhouette and details translate perfectly to the smaller scale. While not built for combat, the Transport value of 3, Max Speed of 6, and Ace Manoeuvres 1-6, will prove invaluable during missions like Garrison Relief and Troop Landing. Costing a mere 10 points each, the Arvus Lighter can zip in to score 15 points before using Rocket Boosters to blast into orbit, freeing up more costly aircraft to concentrate on taking out your enemies!

The fact they’re unarmed and valuable makes them a target of opportunity for long- to mid-range enemy aircraft, like the T’au Air Caste’s Tiger Sharks. Larger and more powerful than the Barracuda, these versatile aircraft can be tailored to punish a variety of targets.

Tiger Sharks have a wide, flat design** with room for two primary weapons to the fore. You can choose between paired swiftstrike railguns to punch through tough targets, unleash no fewer than nine Firepower dice at mid-range with swiftstrike burst cannons, and ion cannons for maximum versatility. Add in the air-to-air missile pods built into the wing structure, plus optional drones, and a powerful seeker missile. These sleek bombers can dish out an awful lot of high-quality mid-range firepower. They’re even effective at long range, where most other aircraft falter!

Want to make sure your Tiger Shark keeps kicking out the pain? Spend a point on some Decoy Drones to give you a shot at avoiding high-damage missiles and rockets. Make the enemy work to strip each of your solid 5 Structure Points. 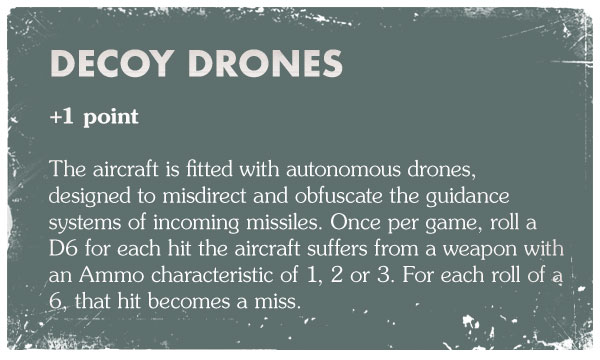 Speaking of drones, the Taros Air War campaign book delves deep into the T’au Empire’s way of war – including the use of advanced drone technology in the Air Caste. 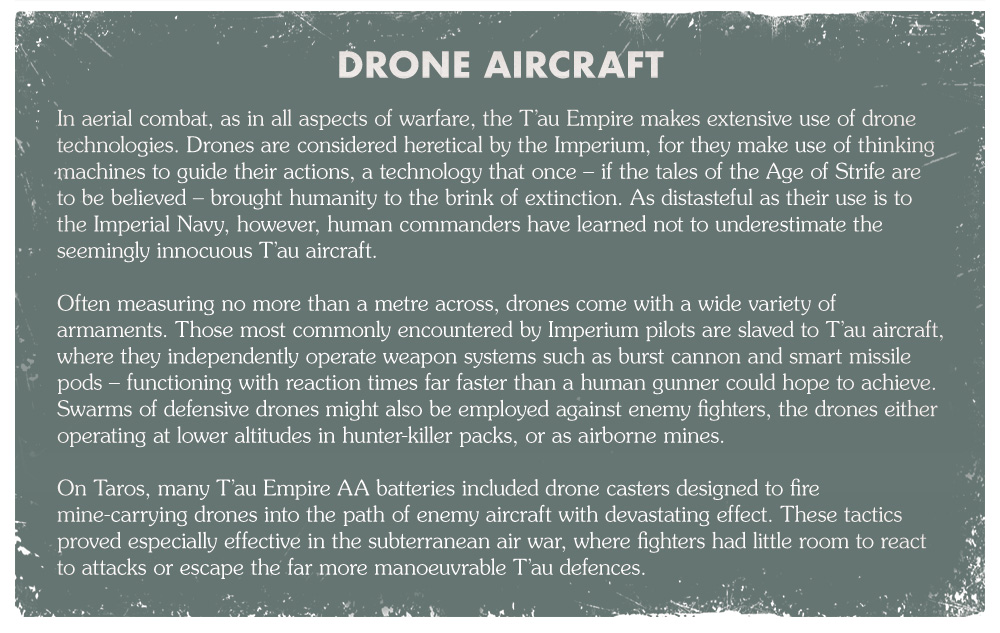 In game, this is represented by optional weapons for your aircraft with All Round fire arcs, and special rules like Decoy and Defensive Drones. Now, let’s talk about this month’s free scenario!

We hope you had fun with Ambush in the Clouds last month! This month’s free scenario sees one side desperately attempting to evacuate vital personnel with an overburdened transport, whilst their opponent pulls out all the stops to take it out. Download it now! 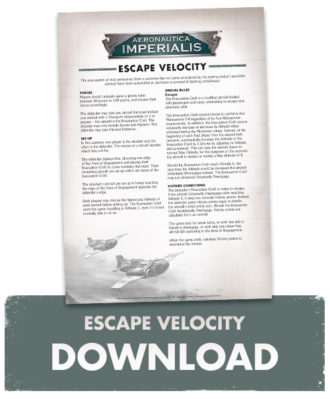 There’s loads more on the horizon, and we’ll be back in a month to show it off. Check out last month’s Flight Plan to download the free scenario and take a look at a couple more previews. While you’re waiting for these upcoming releases, grab a box of Thunderbolt Fighters and get ready to blast those Tiger Sharks out of the skies! Until next time – watch your six.

* Do you remember our lesson from last month? Kor’La is the term for T’au Air Caste Aces.
** It’s basically one large wing with some jets and a cockpit.

Looking for inspiration on painting your Warcry warbands? We challenged the game’s lead designer Sam and painters from the Warhammer …

Battletome: Ossiarch Bonereapers is now on pre-order – meaning that in just a few days, you’ll have the chance to …