Chaos is the greatest threat to the Imperium of Mankind and the denizens of the Mortal Realms – yet the Dark Gods and their servants spend more time battling each other than conquering.

What many call Chaos is, in fact, a loose coalition of powerful entities, each with their own goals and agendas. Khorne, Tzeentch, Nurgle and Slaanesh constantly fight for supremacy within the Realm of Chaos and the warp, be it through their Daemonic warriors or complex schemes that exist on a multidimensional level. 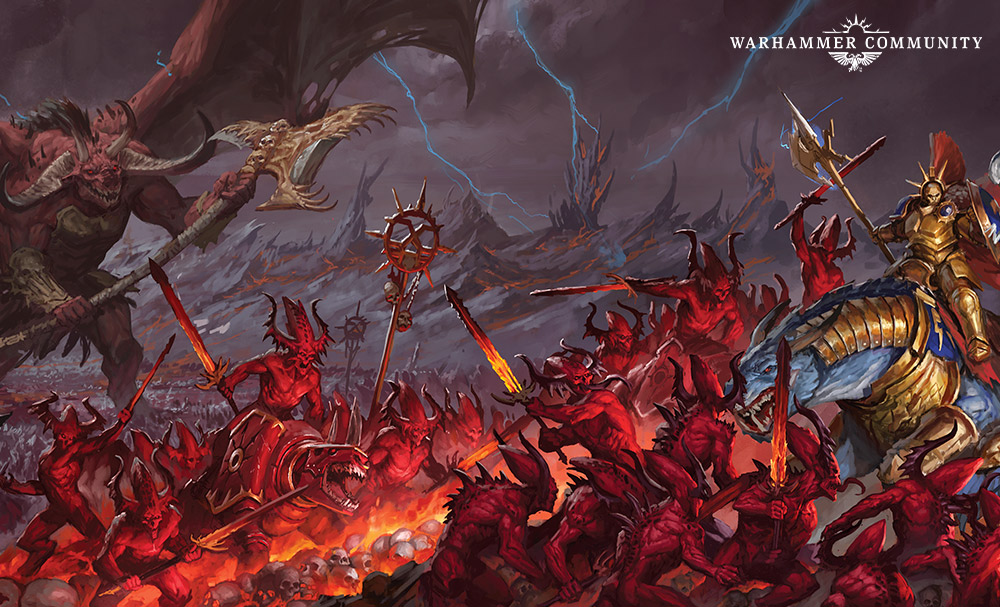 The foot soldiers in these battles are Daemons. These infernal beings are created from the essence of the gods, reflecting their masters’ drives and desires, and thus by their very nature, are in constant conflict with one another.

Many Daemons come to prominence not by their deeds in battle against mortals, but those against the Daemons of rival gods. One such example is Ull’zharr, a Bloodletter who served in the Blood Legion of Rath’Ghar during the Throb-land Wars between Khorne and Slaanesh. When his legion was ambushed and imprisoned by Daemonettes, only Ull’zharr had the foresight to escape the trap. He went on to single-handedly slay dozens of the enemy, shedding much blood for Khorne before he was cut down. 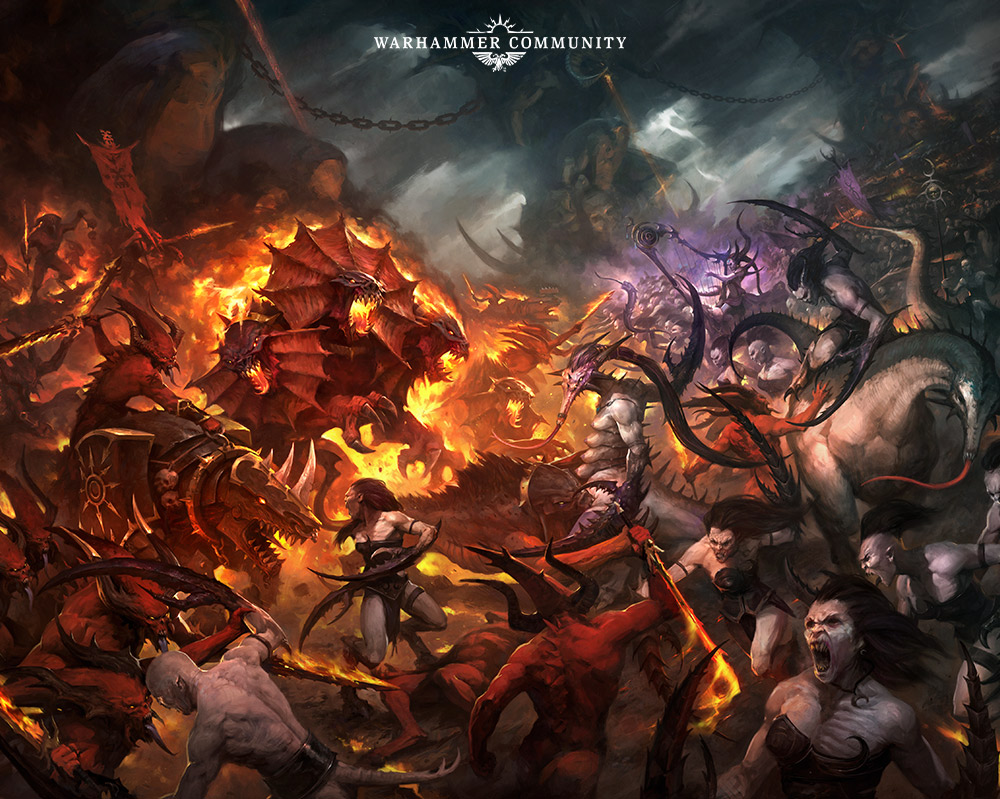 As a reward, the Blood God allowed Ull’zharr to fight in the Skullpits, where he proved his might and ascended to the rank of Herald. Rath’Ghar and the rest of his Legion were denied the right to be remade, their essences banished into the flames of Helbrass.

Some moves in the Great Game are more subtle – and sometimes backfire. One such is Tzeentch’s seduction of Skarbrand. The Bloodthirster was once the greatest of Khorne’s pawns, a force of destruction unrivalled in all of existence – until the Changer of the Ways whispered to him that he could usurp the Blood God and take his place. Skarbrand tried but failed, and as punishment, all reason was choked from him. He became a being of pure, insensate rage, who slakes his fury across all of reality. This makes him, if anything, an even more potent – albeit unpredictable – weapon for Khorne in the Great Game. 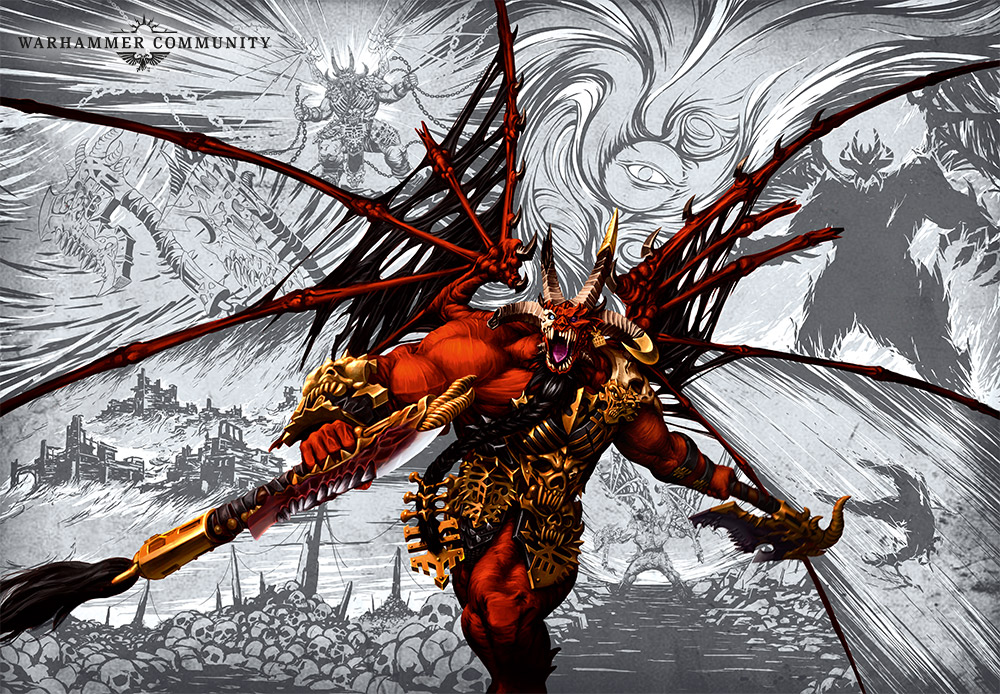 Some Daemons exist primarily to battle their own kind in the Great Game, such as the Keeper of Secrets Shalaxi Helbane. This peerless hunter stalks the greatest champions of their rival gods. The Monarch of the Hunt’s favoured prey are Bloodthirsters, and so devoted is the Daemon to killing them that it has been known to ignore other enemies to focus wholly on them.

Twice, Helbane has fought Skarbrand, both times as battles against the forces of Order raged around them, and both times their mutual enemy has cut their duels short. Helbane eagerly awaits a third chance to prove its – and Slaanesh’s – supremacy over Khorne’s champion. 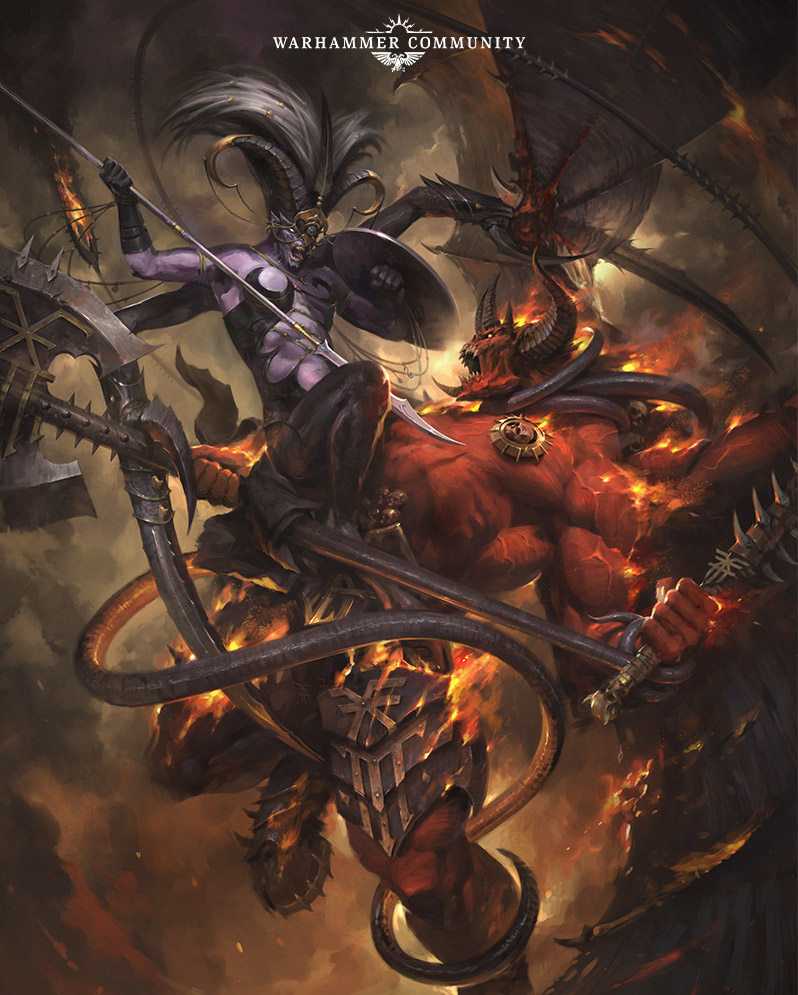 While most moves in the Great Game are made within the realms of the Gods, their conflicts often spill out into the Imperium and the Mortal Realms.

After the fall of Cadia and the opening of the Great Rift, Chaos was ascendant across the galaxy. Armies of Daemons and their mortal worshippers devastated world after world and carved out empires for themselves. Nurgle’s servants claimed the Scourge Stars – and this angered jealous Tzeentch, who took the opportunity to turn on his eternal rival. Ever subtle, Tzeentch told Khorne of their brother’s new empire, and the Blood God struck. Thus began the War in the Rift. 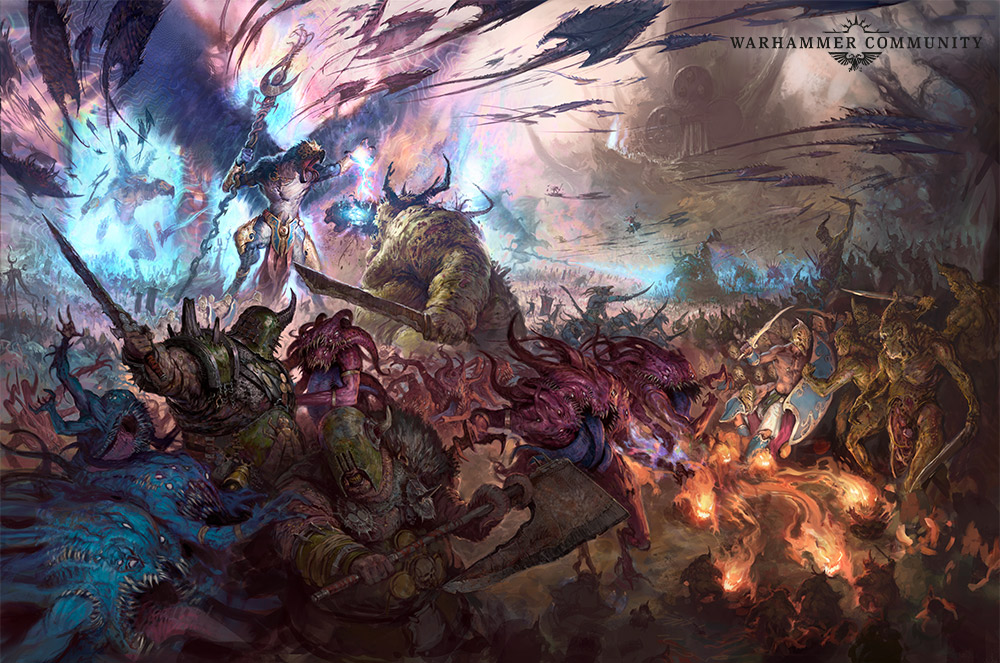 Tzeentch’s forces quickly joined the conflict, forcing Nurgle to pull his servants away from other war zones. The delicious slaughter attracted Slaanesh, and soon the Scourge Stars were home to a full-scale battle between Daemons of all four Gods, turning entire planets into Daemon worlds. This came to a halt only when Tzeentch proposed a contest of champions to decide the matter – then cheated, leading to a resumption of the Great Game across the galaxy. 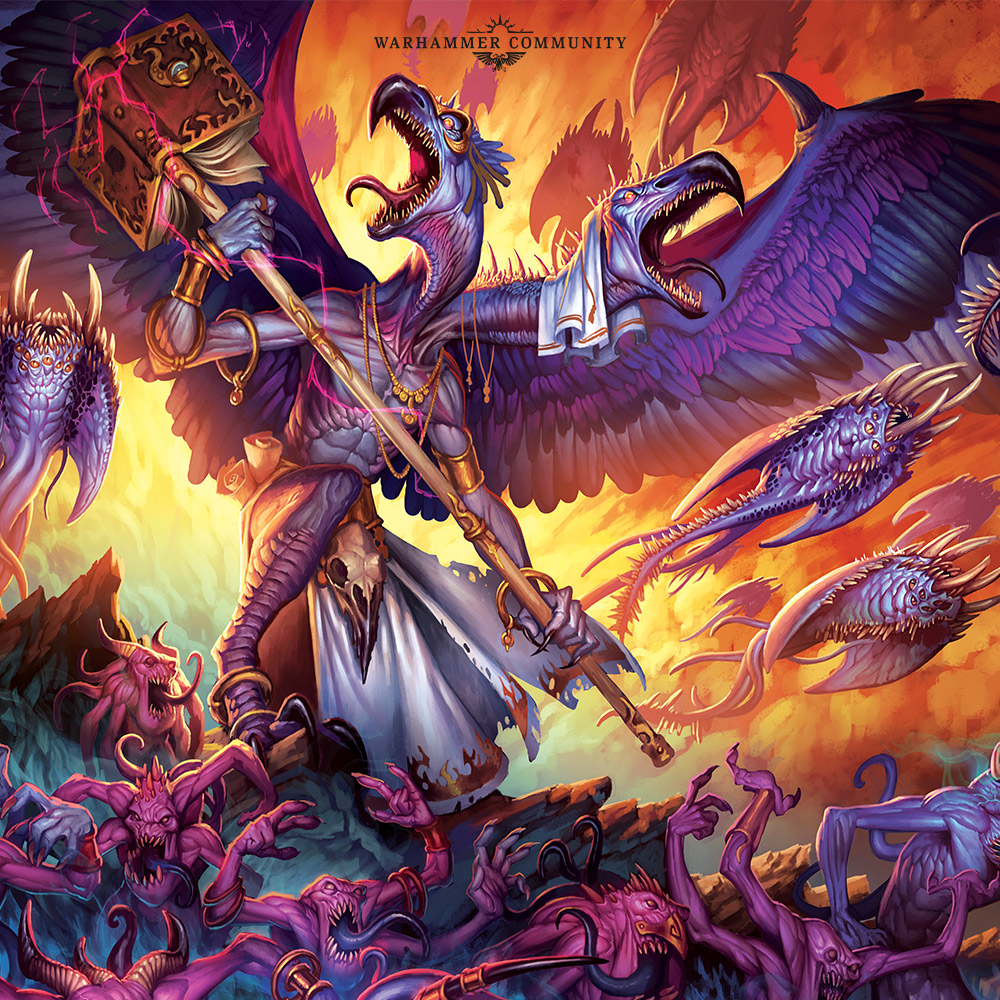 In the Mortal Realms, the forces of Chaos were held at bay for many years by Sigmar’s pantheon. When that shattered, the realms were left to the conquest of Chaos. The gods were united for a time as they divided the realms between them. But when the conquest was over, the alliance broke, as Khorne turned on his allies and his warbands began butchering those they had fought alongside – all the better to prove their devotion to the Lord of Battle. This infighting and wanton slaughter continued for years beyond measure, until Sigmar returned, bringing a new foe for Chaos to unite against: the Stormcast Eternals.

The Great Game is eternal, and its ebb and flow shapes the very nature of Chaos as it manifests across the galaxy and the realms. Tell us about your favourite conflicts between the servants of Chaos on the Warhammer 40,000 and Warhammer Age of Sigmar Facebook pages – and if you want to recreate them, check out the range of Start Collecting! sets for Daemons of the four Chaos Gods.

Summer may be over, but we’ve got something to brighten your day – your monthly White Dwarf Preview! We’ve got a …

Behold the Rumour Engine! Can you predict what it is? Let us know what you think it is over on …