Vehicles of the Adeptus Mechanicus

Two new Adeptus Mechanicus vehicles are available to pre-order this weekend – the Skorpius Disintegrator and Dunerider. Like all armies from the 41st Millennium, the devotees of the Omnissiah have a unified aesthetic characterised by utilitarian function and a lack of humanity. Today we’re going to show you how our awesome designers, led by Archmagos Dominus Jes Goodwin, achieved this look and ensured that these new vehicles fitted in. 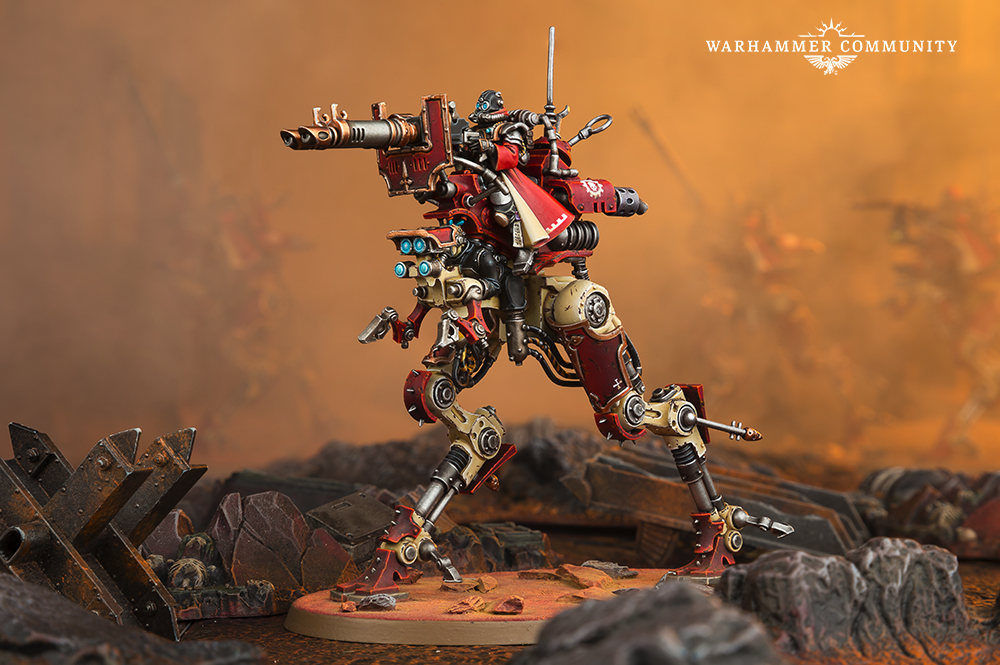 Sydonian Dragoons and Ironstrider Ballistarii both share the same reverse-knee joint design as their smaller brethren, the Sicarian Ruststalkers and Sicarian Infiltrators. Clearly, the Adeptus Mechanicus have identified this as the most efficient way to cross hostile terrain at speed. 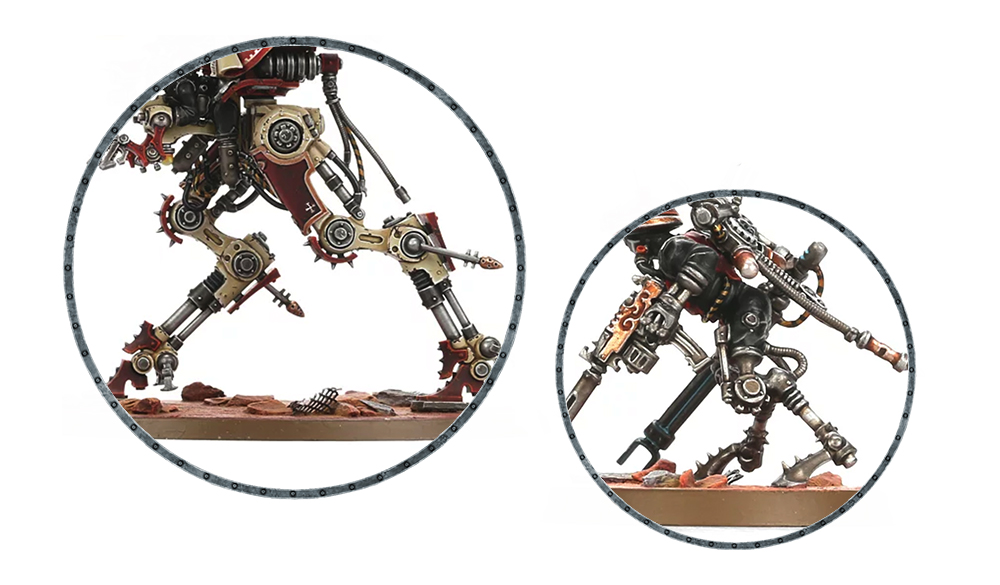 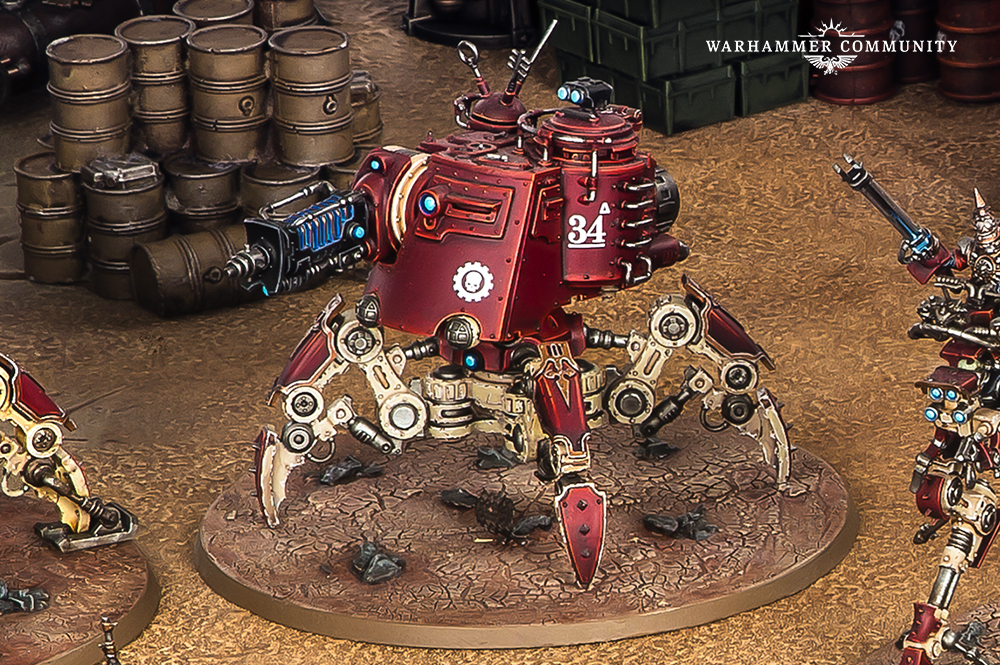 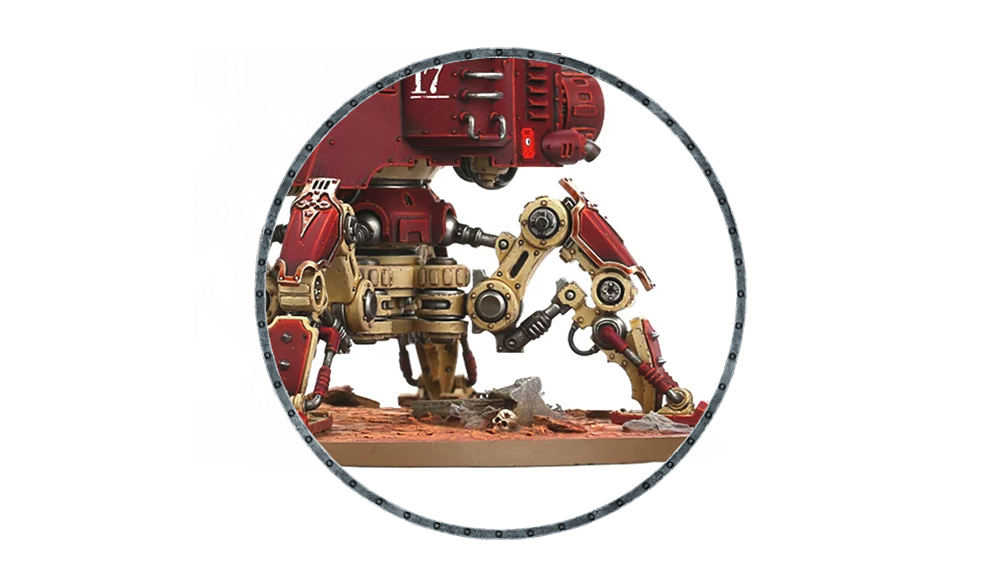 … as well as the same rear exhausts and power cells. 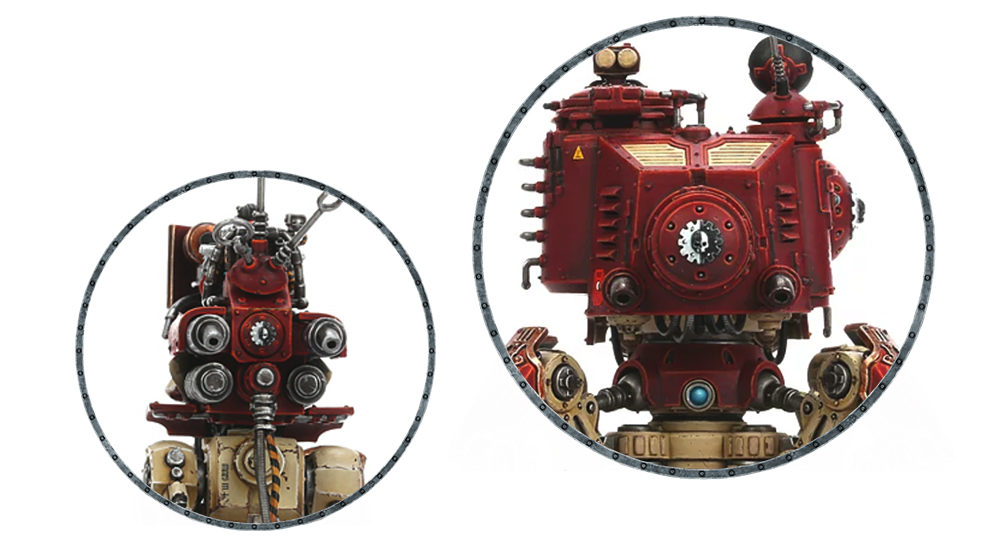 The various aerials and antennae also recall those on the Adeptus Mechanicus infantry, such as the Skitarii Vanguard. Not only does this tie the models together, but it also shows how the Skitarii are constantly relaying data to, and receiving orders from, their masters. 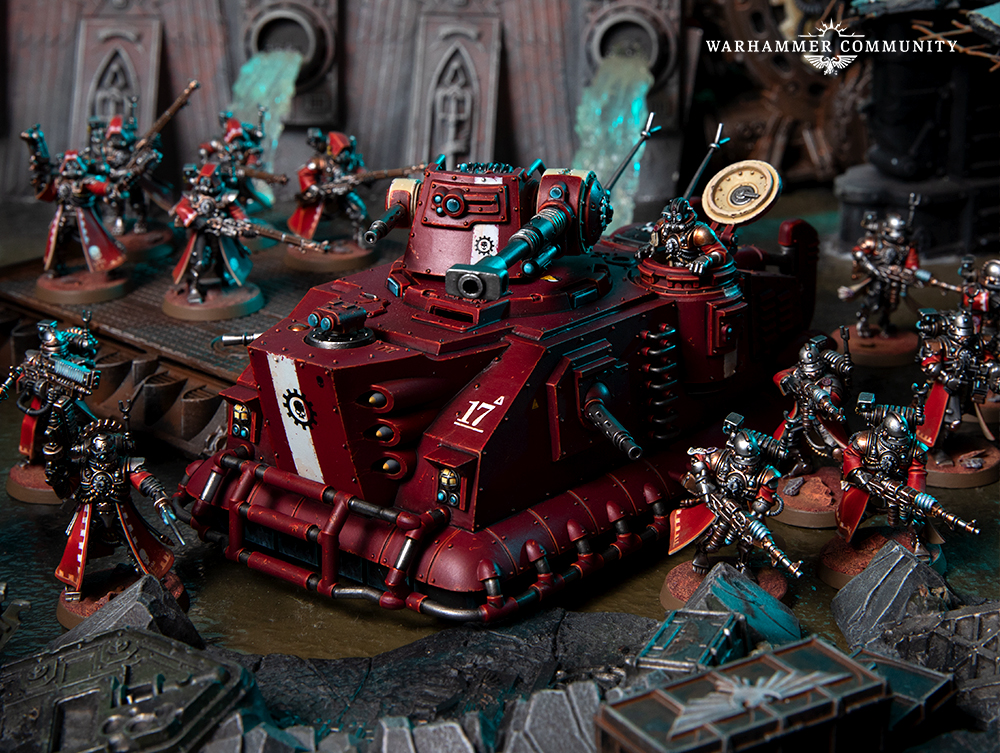 The new Skorpius Disintegrator battle tank and Skorpius Dunerider transport both share a number of design features with the Onager Dunecrawler. Hinting at a similar battlefield role, the Disintegrator shares its sloped front… 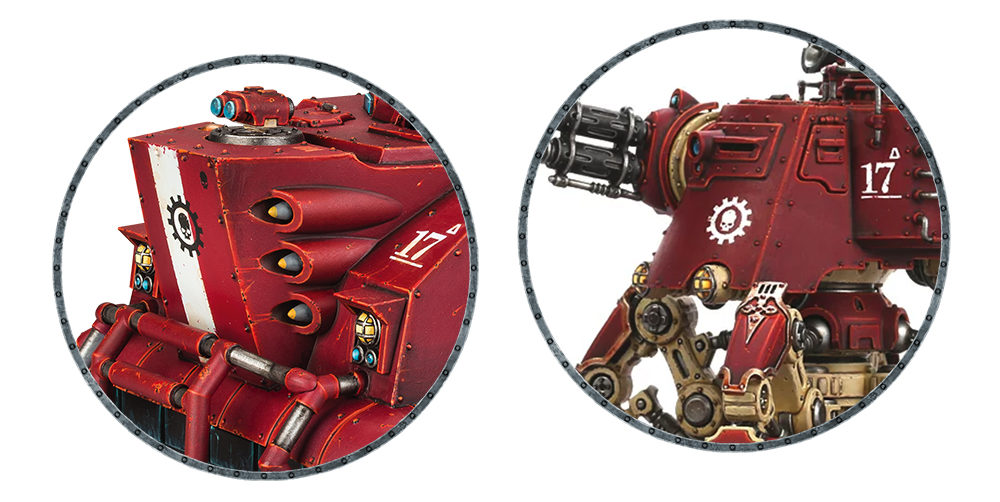 …and round flip hatch. 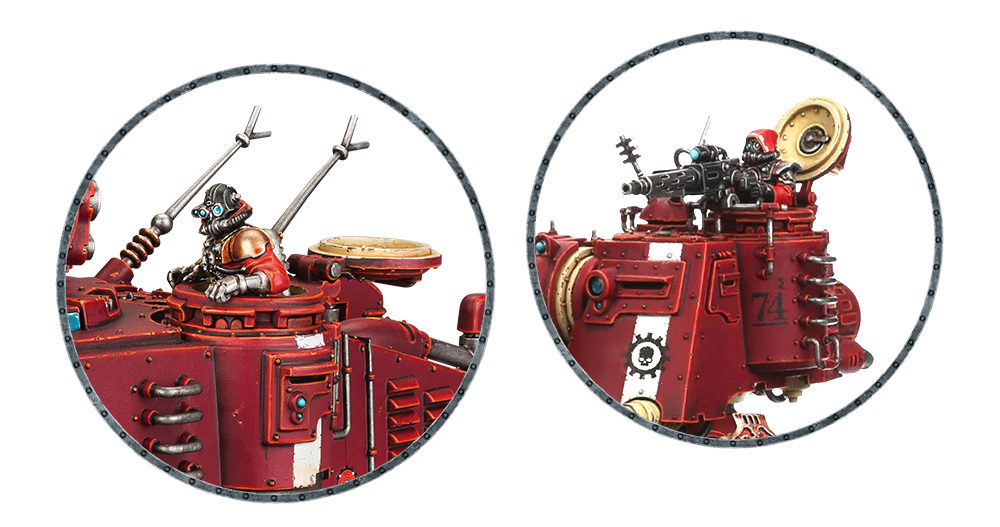 The Dunerider also features a hard-wired servitor, which evokes the one on the Ironstrider model. While throughout the Imperium, most forces would train someone for this role, the cold logic of the Adeptus Mechanicus sees much more efficiency in just plugging in a mind-wiped servitor.

These two new skimmers also join a long, proud history of skimmers in Warhammer 40,000, harking back to the early days of the “Rogue Trader deodorant-bottle skimmer tank” from the first edition of the game! 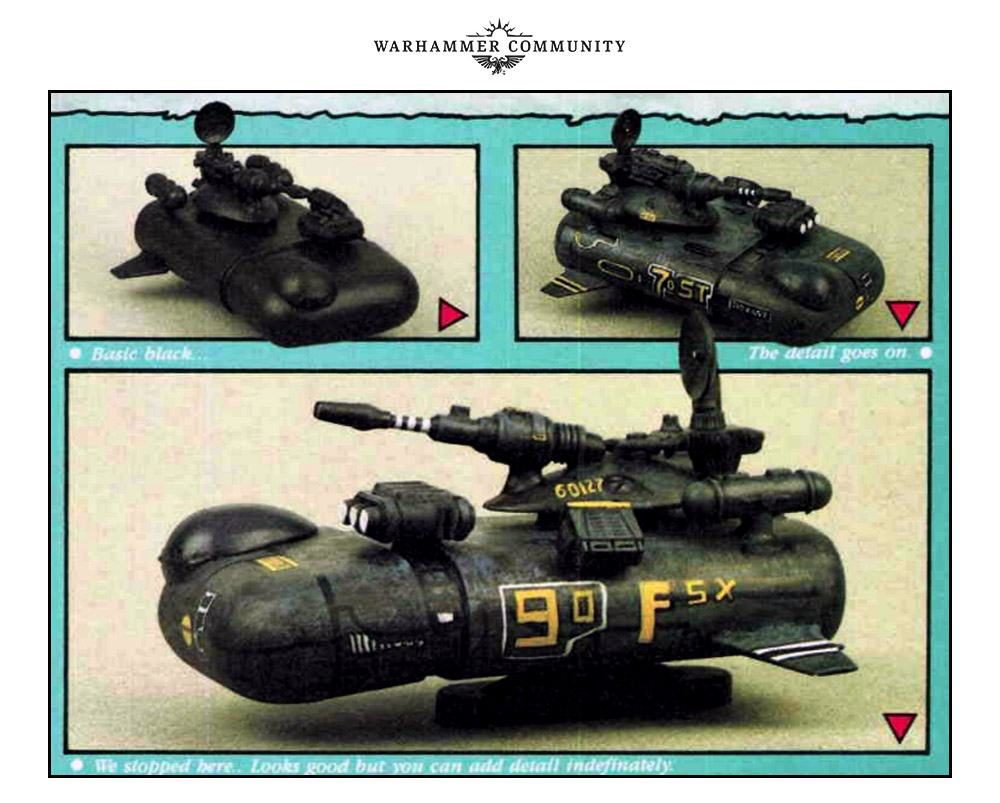 As you can see, with a few details repeated across models, our incredible miniatures designers achieve an awesome thematic consistency. These details also tell a story, not just about the individual models, but about the Adeptus Mechanicus as a whole and how they wage war in the 41st Millennium. There’s a sense of uniformity and even inhumanity there and while most of the Imperium favour function over form out of necessity, the Adeptus Mechanicus have taken this to the next level.

The Skorpius Disintegrator and Dunerider are available to pre-order on Saturday. In the meantime, read about how Movement Trays will help move your hordes of Skitarii across the battlefield and check out the Adeptus Mechanicus Apocalypse Faction Focus so that you can start getting your congregations of war ready for the biggest battles ever.

In our latest Forbidden Power preview, we’re looking at the Stormvault Campaign and awakened artefacts – a new way to …

Tooth and Claw: New Monstrosities for the Genestealer Cults

Next Week: The Titans Walk

Adeptus Titanicus is nearly upon us, offering you, for the first time in over a decade, the chance to experience …