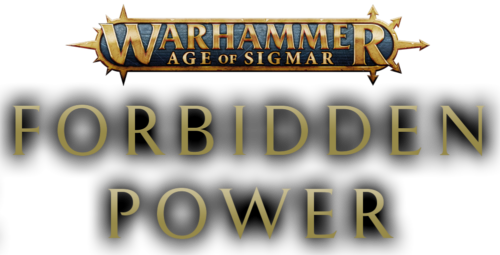 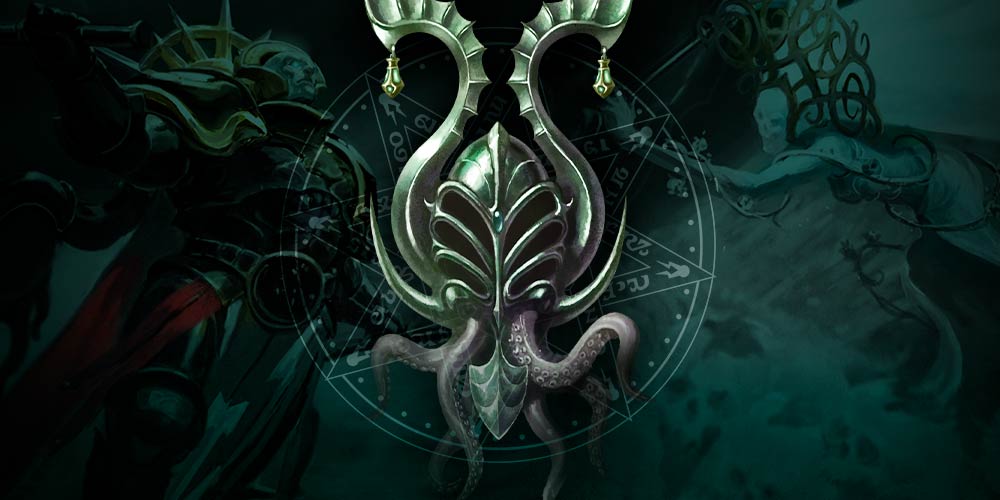 Deific Mons was afire. Gulley Jedd stared up from the deck of his fishing galley at the immense silhouette of the gods’ mountain, limned by emerald flames. The streaking clouds above the immense edifice swirled and raced about like a shoal of silt-eels. Was it Jedd’s imagination, or could he see shapes moving within the stormy skies? Sigmar’s teeth, he could have sworn they looked almost human.

‘Death looks down upon us, Captain,’ said Old Kobb, the one-eyed boatswain nervously tapping his ivory false hand on the gunwhale as he stared up at the eerie sight. ‘By Morrda’s eyes, I never seen nothing like this.’

That did nothing to ease the tense mood of the Jolly Lady’s crew. None amongst them had sailed the black expanse of Lake Lethis as long as Kobb. Jedd had always thought there was nothing that could strike a fear in the man. He’d lived through the Black Bile Plague, and bore the pockmarked lesions to prove it. He lost two sons during the Season of Witches, and had fought in the border wars against Pater Blackteeth and his deadwalkers. None knew the omens better, nor could read the Stygxxian wind more clearly.

Right now Kobb looked like a knock-kneed child aboard ship for the very first time.

‘Stop your gawping and get those nets hauled in,’ Jedd barked, trying to inject some authority into his own voice. ‘We’ve caught enough bledrigs for one day.’

They hadn’t, not really, but he couldn’t shake a grim feeling of foreboding, and you didn’t fish the waters of Lake Lethis as long as Jedd without learning to listen to your instincts. No sooner had the captain turned to make for his cabin, that he heard the sound of distant screams split the air. He rushed to the gunwale and stared out across the pitch-black surface of the great lake.

Something huge was racing across the surface, heading towards them. At first he took it as a great wave, and that thought was fearful enough because these waters were known for their unnatural calm. Perhaps, then, it was a great skullcoiler surging up from the depths, a thousand feet of rotting bone and scales, teeth as long as the Jolly Lady’s oars. But no. The water glowed like the emerald fires atop Deific Mons. A ball of ice formed in Jedd’s stomach, and cold sweat dripped down his back. 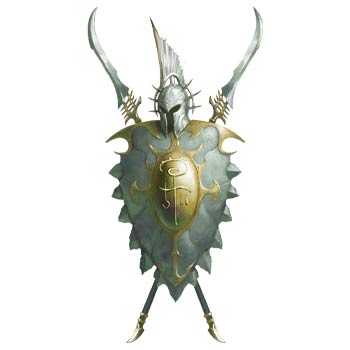 As the tide rolled onwards, it picked up other fishing ships like children’s toys and tossed them keel over prow, spilling tiny, shrieking figures into the night-black water. Those unfortunate sailors were surely dead, but even if by some miracle they lived, they were no less lost; these dark waters were touched by ancient magic, that devoured memories and stripped away a man’s mind piece by piece.

The surging mass roared closer and closer, and Jedd at last saw the true horror of it.

This was no bow wave heralding a monster from the depths. It was not a wave at all. It was a mass of churning spirit-stuff, as large as the harbour wall of Lethis itself, and shaped from thousands upon thousands of twisted, incorporeal forms. Grinning skull-faces and grasping claws reached out of the great mass, howling in inchoate fury. The air had turned biting cold, and rimefrost crep along the blackwood hull of the Jolly Lady.

‘The dead!’ went up the cry, echoed by a score of terrified lakemen. ‘The dead come! Mordda protect us!’

Half a league away now and closing fast, the wall of death overran a brig twice the size of Jedd’s ship, lifted the prow up and tore the mast to splinters, and slammed the heavy vessel down in an explosive spray of water.

‘Bring us about, Halder!’ Jedd shouted, and he could hear the tremble in his own words.

Wide-eyed and pale as a moonfish, the helmswoman hauled upon the steering pins. With aching slowness, the fishing galley began to turn, but it was already too late, Jedd knew. The harbour walls were only a distant speck on the horizon, and what protection could even that haven offer against such horror?

He clasped the raven feather necklace at his throat, and prayed to silent Morrda for a miracle he knew would not come. So vast was the spirit tide that it blocked out the moonlight and wreathed all in its viridescent glow.

There was a thunderous explosion, and the Jolly Lady rocked, sending the captain sprawling across the deck. He looked up to see a glistening form leap straight over the fishing galley, iridescent scales gleaming. It moved too fast for him to track, but he caught the impression of a vaguely aquiline form, trailing eel-like tails as it crashed back down into the water and raced towards the wall of spirits. Jedd stood, and was nearly struck full in the face by another slithering mass. He ducked, his hands raised over his head, and felt the rush of wind and the splatter of freezing water as more and more serpentine shapes hurtled over the Jolly Lady. 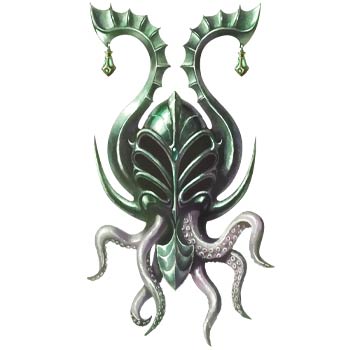 Crawling on hands and knees to the gunwale, he dared raise his head enough to peer over the wooden rail. Beasts of the deep waters had burst from the surface of Lake Lethis, and now raced towards the oncoming gheist-storm – not through the water, he saw, but above it, as if they were held aloft by invisible hands. Hundreds of them converged into one mighty spearhead, and more emerged from beneath the surface of Lake Lethis in sudden, explosive geysers.

‘Gods be good,’ muttered Old Kobb, making the sign of the comet with trembling hands.

Each of the eels bore a rider upon its back; lithe and muscled warriors clad in ridged war-plate and sparkling, crested helms. Each carried a lance that crackled with lightning. The aquiline beast that Jedd had first seen charged at the head of the formation, and it bore the most magnificent warrior of all, both regal and terrible at once. His cloak was a shimmering cascade of iridescent blue, his armour shone like the sun sparkling upon still water. A strange sensation came over Jedd as he looked upon the wondrous sight; he felt his head swimming, as if he had drained a yard of moonale. Through the bleary fug of his vision, time seemed to slow. It was if he was caught in a daze, in the grasp of some waking terror, unable to tear his eyes away.

As the undersea king raised his glaive high and plunged into the storm of death, the spirits parted before him like a breaking wave. Blinding arcs of lightning blasted dozens of gheists into showers of spectral matter. The eel-riders followed close behind, thrusting their lances into the mass of spirits, their mounts snapping out with razor-fanged maws to rip and tear at formless foes. The death-tide rippled, and a great host of ghostly horsemen burst from its glowing mass and charged the crested knights, their fleshless mounts trailing balefire as they struck out with verdigrised scythes. Many eel-riders were torn from their mounts, tumbling down into the black depths below.

For a moment, Gulley Jedd thought he and his fellows had been granted salvation by these strange riders from the deep, and that they might by some miracle escape this nightmarish battle. Then he heard a thunderous splintering of wood, and the deck of the Jolly Lady rose into the air almost vertically, sending him and his crewmates tumbling into empty air. Jedd somehow managed to grab the nearest guide-rope, and he dangled there helplessly, legs scrabbling against the slick deck. Others were not so fortunate.

He saw Kobb thrown head over heels, to smash with bone-shattering force into the foremast. Other screaming figures rolled past him, scrabbling helplessly for a handhold before splashing into the freezing lakewater.

Something vast and dark smashed its way through the hull of the galley – an immense, shelled leviathan, ridged and scarred, and covered with slick and foul-smelling weeds. It bore atop its back a howdah of polished coral, and a gaunt rider stood braced upon the beast’s head; an aelf, Jedd saw, with skin so pale it seemed translucent. The aelf clasped a chain embedded in the leviathan’s leathery hide, muscles bulging as he guided his charge on.

The sea-beast reared and soared into the sky, stretching rudder-like limbs wide. As its great bulk passed him, Jedd looked across and met the eyes of its master. Pitch black they were, and as cruelly indifferent as those of any boneshark or skullcoiler about to snare its prey. Looking into those empty orbs, Jedd felt a fear no less profound than that which he had felt when the dead had swept across Lake Lethis.

Then the hull of the Jolly Lady came apart in his hands, and he lost his grip and fell into empty air, screaming as the glassy water rose up to strike him in the face. There was cold, then terrible pain, and then nothing but silence and blackness.

Discover the changes that are coming to your faction as the new edition of Warhammer Age of Sigmar dawns.

Starting a Narrative Campaign for the New Edition? Join Our Intrepid Hobbyists on their Path to Glory

In the first step of their campaign, our four hobbyists get their toolboxes and paints out.

How to get started with Warhammer Age of Sigmar

Have you been thinking about trying out Warhammer Age of Sigmar? Check this out first!