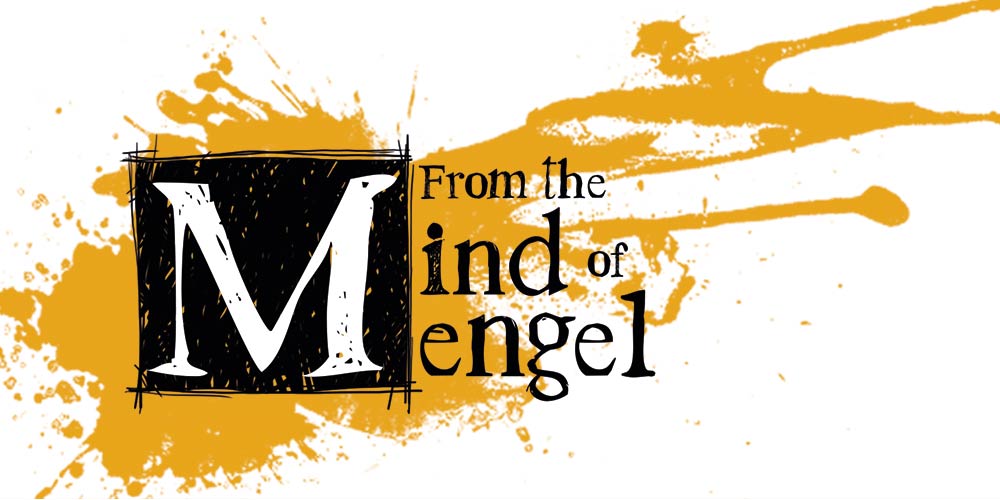 Productive chap that he is, Tyler Mengel has another Warhammer Age of Sigmar army on the go. Not content with his Nighthaunt, Daughters of Khaine, Moonclan Grots and Fyreslayers, he’s now hard at work on a Maggotkin of Nurgle force – and he’s here with the lowdown on how he’s painting their putrefaction. Take it away, Tyler.

Tyler: When I saw the new Battletome: Maggotkin of Nurgle and the shiny new Great Unclean One model, my mind was made up: I was going to start a Nurgle Daemon army. I’ve actually had one in the past, using the older metal models, and I had also painted up a unit of Plaguebearers for the 2013 US Golden Demon using an updated version of that army’s colour scheme. While I briefly debated reusing the same colour scheme, I decided to go for a clean slate. When I looked through the Maggotkin battletome, the colour scheme of the Befouled Host really stood out to me. It’s a pale, beige colour, with a slight green tint to it. I also was really intrigued by the Putrid Flesh guide in the Citadel Paint app. Using both of these as my starting point, I jumped headfirst into the Nurgle sludge pool.

(Please excuse the occasional switching of which model is shown, I was painting all 10 at once, and I got a bit confused with which Plaguebearer I was supposed to be photographing.)

Step 1: To start with, I primed my model using the Zandri Dust spray and then tidied up any areas that were missed with the regular Zandri Dust from the pot. You want to make sure you have a nice, solid coat. 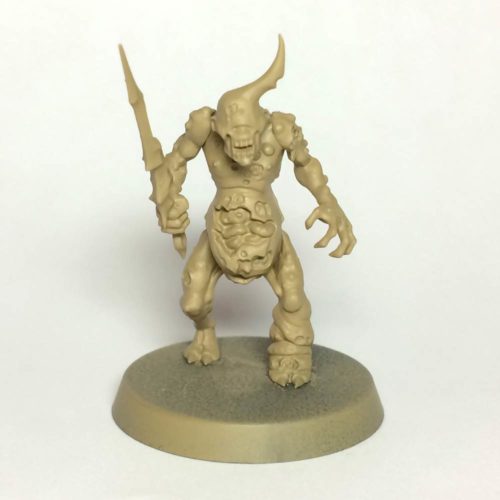 Step 2: Next, I needed to add the slight green tint. I did this by drybrushing the whole model with Ogryn Camo. You can be quite messy here with the drybrush since it’s our first colour. You just want to make sure that it’s a pretty solid coat, leaving the Zandri Dust in the recesses. 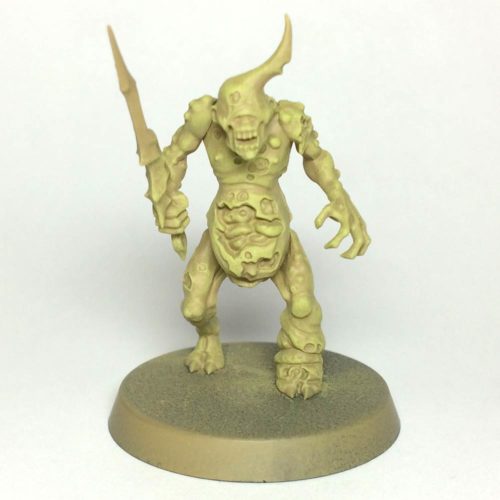 Step 3: This was followed by an all-over wash of Seraphim Sepia. This helps to tone down the green colour and bring it back towards the beige we want while also shading the recesses. 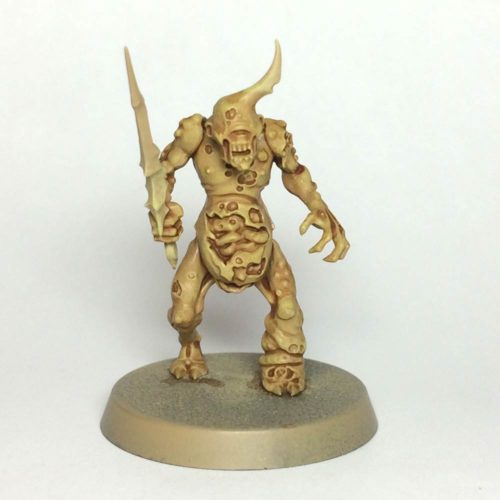 Step 4: After shading, I drybrushed the whole model again, but this time with Ushabti Bone. You want to go lighter on this drybrush than the last one. 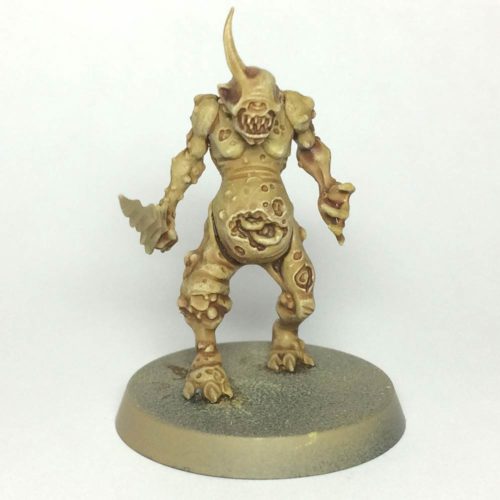 Step 5: Next, it was time to add some colour to the wounds. First, I painted Carroburg Crimson into all of the open wounds. This adds the colour we want, while also providing shading. I followed this with a second coat of Carroburg Crimson to really enrich the colour. On the second coat, I also thinned it down a bit and painted some around the open wounds, to make the skin look sore.

You want to try to avoid a hard line on the skin where the red stops. I did a few thin layers of this, building up the colour more towards the wound itself. Also, don’t be afraid to use your finger to “smudge” the line where the red stops while it’s still drying. This will help blend it and make it a bit blotchy, which is perfect for Nurgle. I also picked out a few of the larger pustules with this, and also the knuckles and around the mouths to make them look raw. 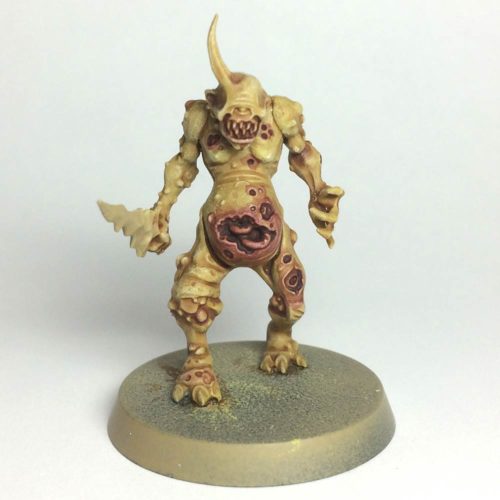 Step 6: I then gave the wounds themselves a coat of the Druchii Violet Shade to darken them and add more depth. I also painted the eyes with this Shade. 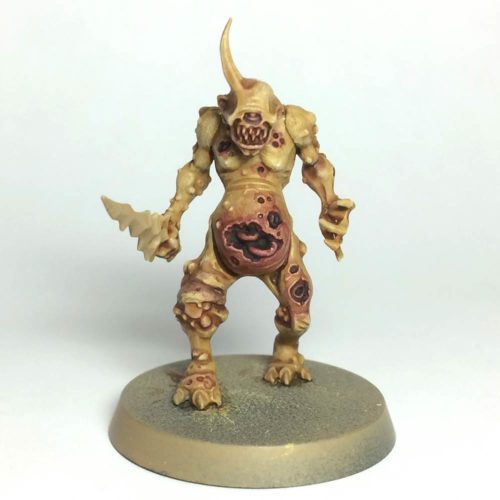 Step 7: This is the step that took the longest as I edge highlighted the whole model with Krieg Khaki. This colour has a slight green tint to it, which is perfect for Nurgle. Pick out all of the details on the skin, as well as in the wounds and guts. Being neat and tidy during this step will help to hide some of the messiness from drybrushing earlier. 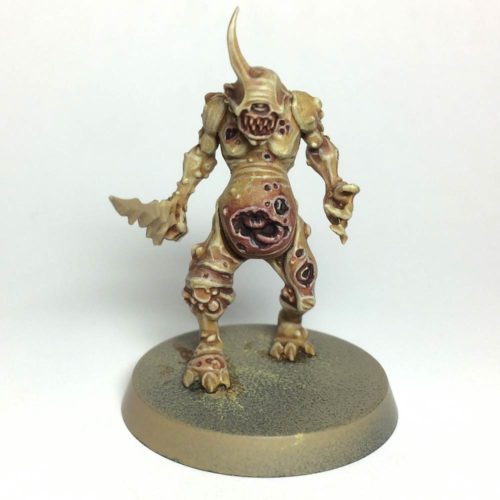 Step 8: To finish off the guts and wounds, paint a layer of the Bloodletter Glaze paint. This will tint the area with a more saturated red, including the highlights we painted in the previous step. 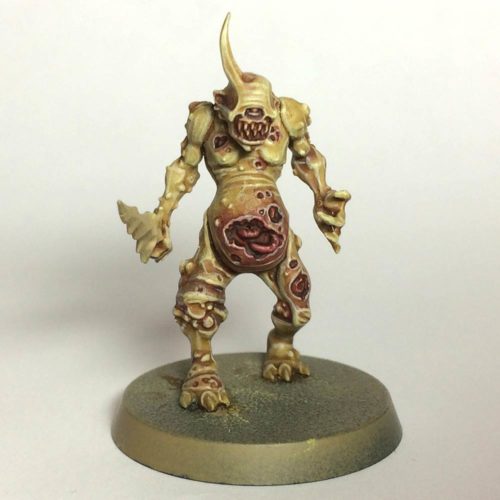 Step 9: To finish off this stage, I picked out all of the pustules with two coats of Seraphim Sepia, to give them a disgusting yellowish tinge, and highlighted them with Krieg Khaki. 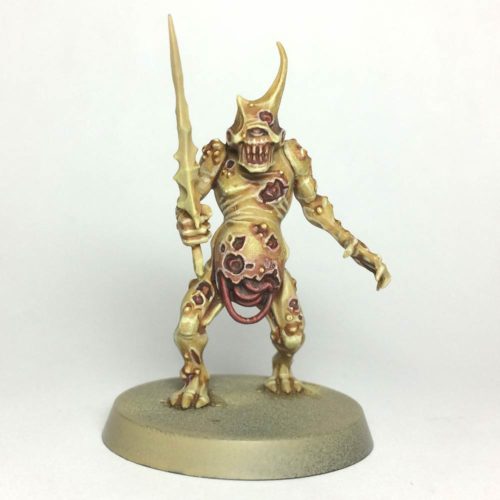 Step 1: All of the bone areas, such as the toenails, horns, and teeth, were basecoated with Rakarth Flesh. On the horns, I did this in a striped pattern, with the ends nearest the head tapering to a point. This helps it look like it’s growing from their head. 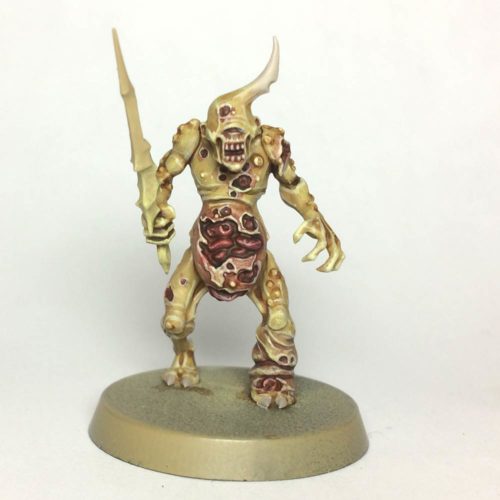 Step 2: These were then washed with Agrax Earthshade. On the horns, I instead painted the Agrax Earthshade in a similar stripe pattern as the Rakarth Flesh, but near the bottom of the horn, tapering to a point on both ends of it. It’s ok if it’s a little messy near the top of the horn because it’ll be covered up in the next step. 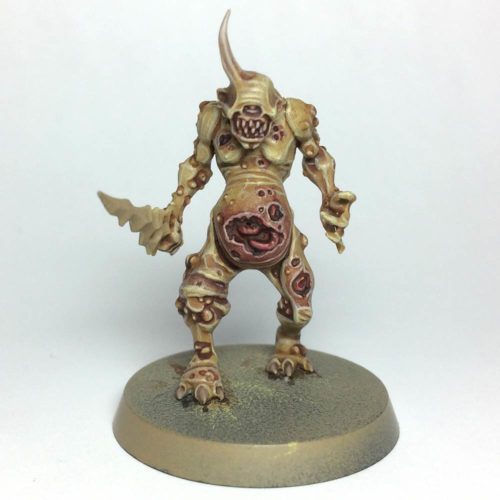 Step 3: Lastly for the bone areas, I highlighted them with Pallid Wych Flesh. On the horns and the toenails, this was done in the same manner as the Rakarth Flesh, just concentrating further up the horn so that some of the basecoat was still visible. This should give you a good transition from a darker brown at the base, to the almost white at the point. 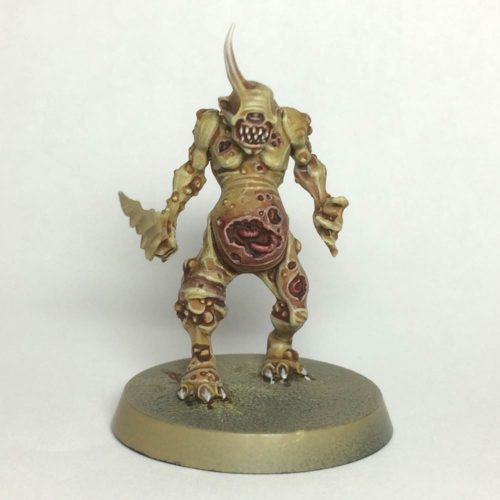 Step 1: Only a few of these models have tongues, but the tongues and tentacles on all of my Nurgle models are painted the same way. First, I basecoated them with Bugman’s Glow. 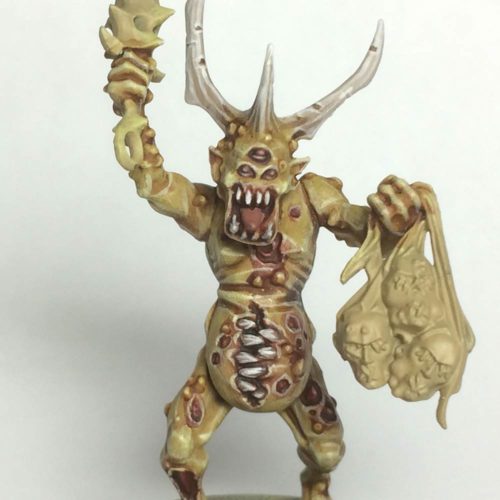 Step 2: They were then shaded with Druchii Violet. 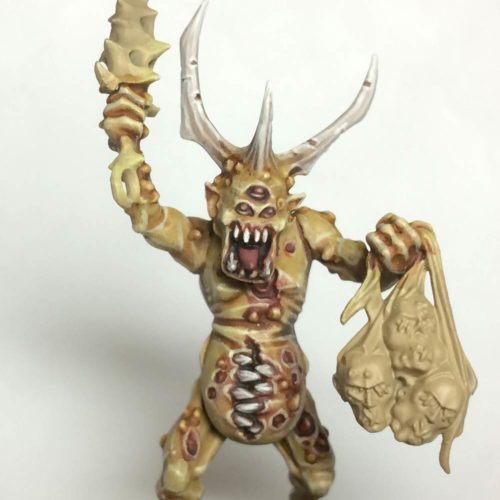 Step 3: I highlighted the tongues with a quick layer of Bugman’s Glow again, followed by a final highlight of Krieg Khaki to tie it back into the skin. 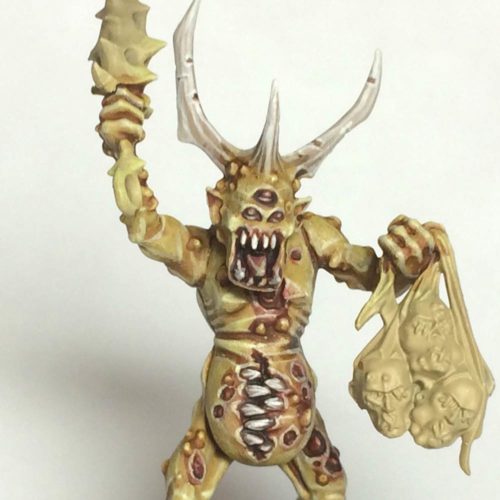 Step 1: All of the eyes were basecoated with Tau Light Ochre. Make sure to leave a line of the violet wash from before between the yellow of the eye and the skin. 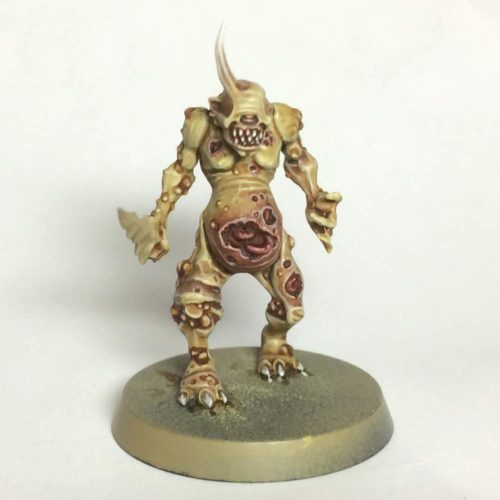 Step 2: The eyes were then highlighted with Dorn Yellow, followed by painting the pupil in with Abaddon Black. 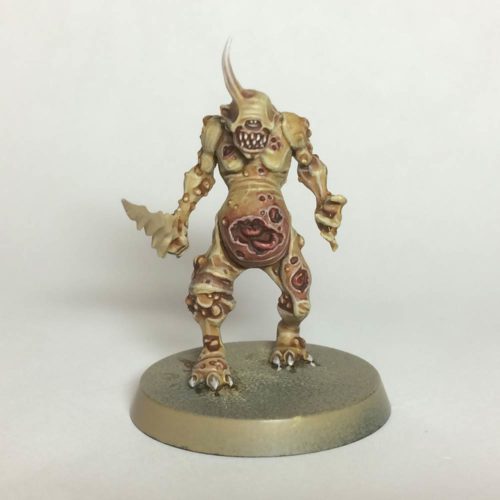 Step 1: For the swords, I followed something close to the guide from this January’s White Dwarf. I decided to simplify it a bit, though, and cut out a step. To start with, all of the swords were basecoated with Abaddon Black. You’ll need to do two thin coats of this for smooth coverage. 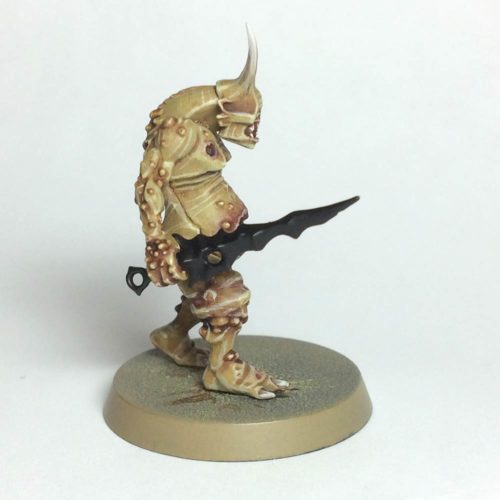 Step 2: I then highlighted all of the edges with Sotek Green. Make sure you get all of the jags in the interior of the blade too. 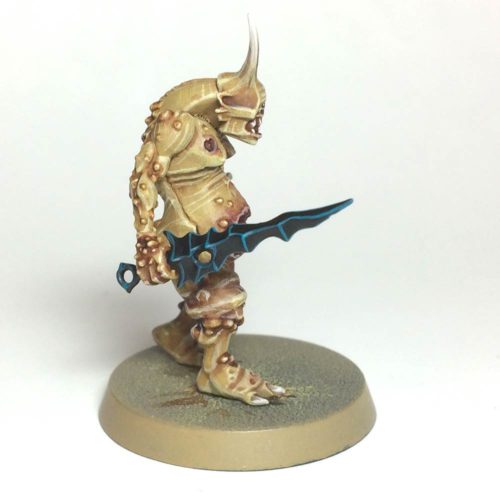 Step 3: I finished it off with a highlight of Administratum Grey on the outermost points of the jags. 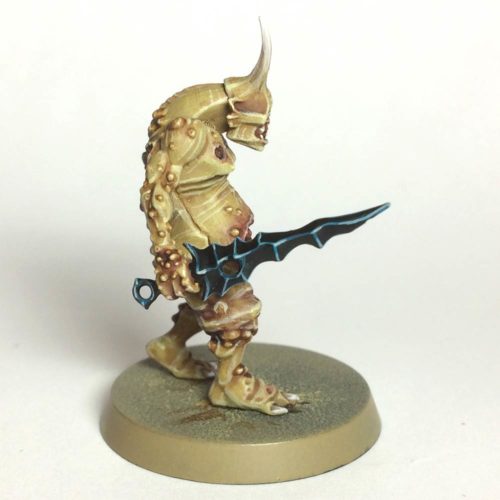 Step 1: At this point, the model is done and you can base them to match your army. If this model is specifically for a Nurgle army, though, you can theme the base accordingly. I wanted to go for a swampy look, which meant pools of goo. To create the ground around the pool, I painted patches of Stirland Battlemire Texture paint. Try to make the texture look random and vary it up between the bases. I generally went for three to four patches of ground on each base. 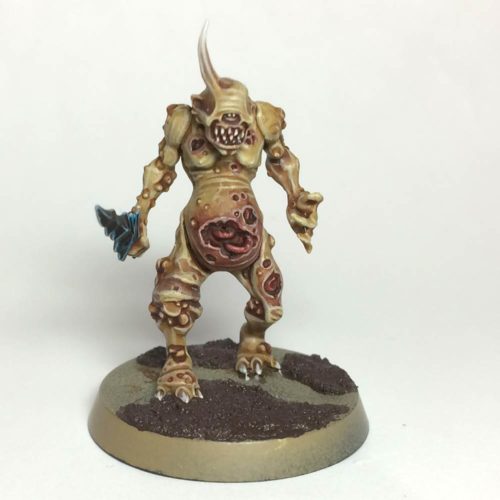 Step 2: This was then drybrushed with Gorthor Brown, followed by a lighter drybrush mixing in a bit of Ushabti Bone. 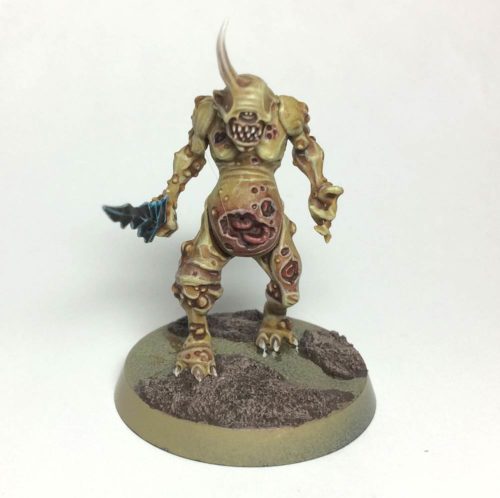 Step 3: All of the flat areas of the base were basecoated with Caliban Green. This will act as a colour that can show through the Nurgle’s Rot later. 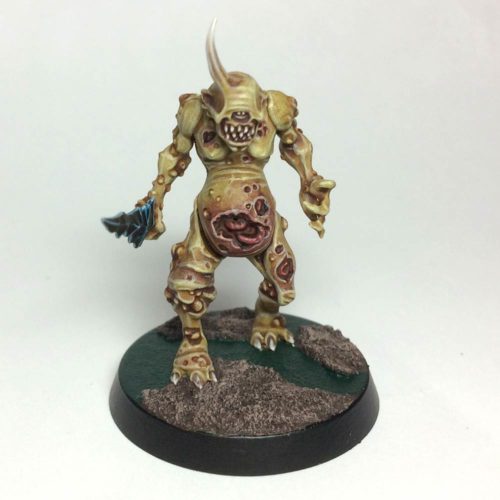 Step 4: At this point, I glued some skulls from the Citadel Skulls pack onto the base to spice it up a bit. I wanted them to look like they were partially submerged in the swamp, so I cut them in half at different angles. I painted these the same way as the bone before. I also glued some rocks on which I painted with Dawnstone before washing them with Nuln Oil, followed by a drybrush of Dawnstone and finally Administratum Grey.

I like to seal my models to prevent the paint from rubbing off, so I matte varnished it here before doing any of the shiny parts. When that was dry, I painted a layer of Nurgle’s Rot onto the swampy areas and covered the guts and wounds with ‘Ardcoat. 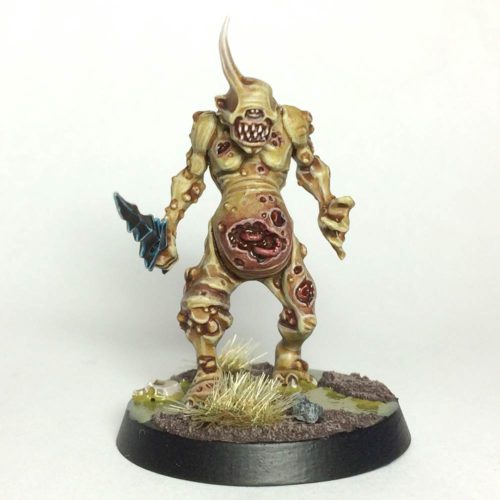 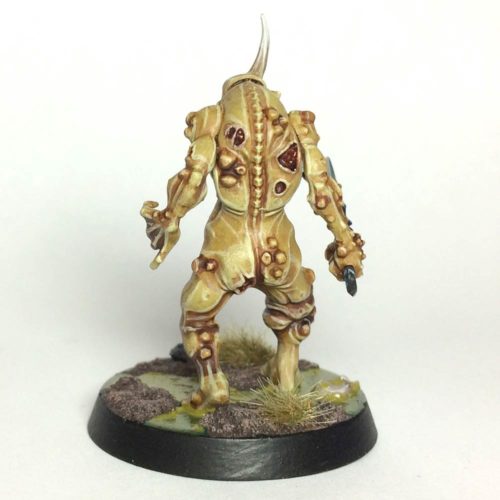 I painted all 10 of mine at the same time to speed things up and managed to get them done over about four days. I’m really happy with how they turned out and am well on my way to my 1,000 point army for my half of the Team Tournament at AdeptiCon. 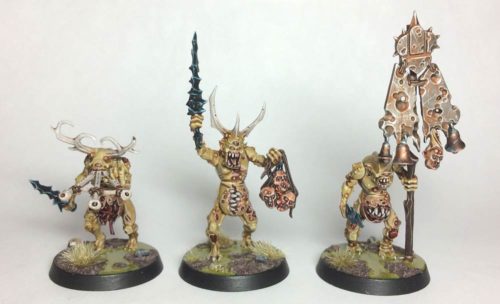 I painted my Great Unclean One using the same method, with a few more layers here and there and a bit more care with blending in the different washes for the bruising. On him, I applied an extra layer of highlighting with Pallid Wych Flesh on the skin of his face and hands. 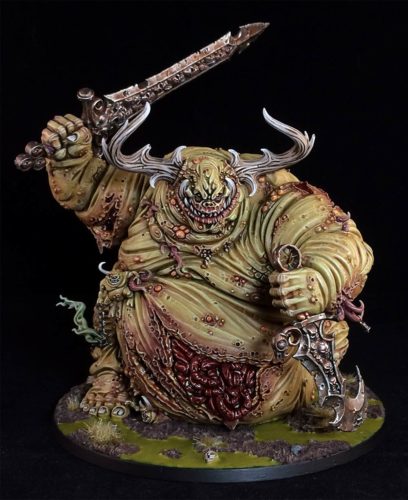 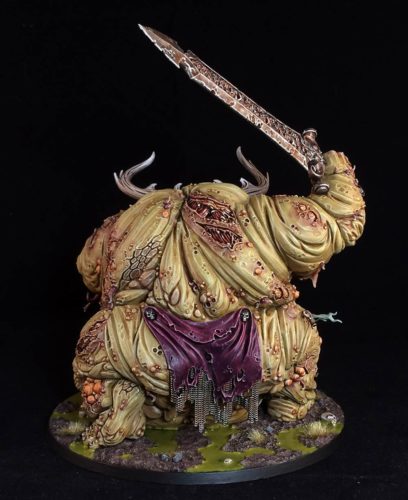 If you try this striking and effective colour scheme for yourself, be sure and show us the result on the Warhammer Age of Sigmar Facebook page – you can pick up your Plaguebearers and other Maggotkin of Nurgle models on the Games Workshop webstore now. And if you want to see more from Tyler, worry not – he’s sure to be back soon with another new and exciting colour scheme for us to try.

The season of war may have come a little late this year, but it’s making up for lost time! With …

You’ve got to see this Nurgle Daemons army Tyler has gathered for both the far future and the Mortal Realms.

From the Mind of Mengel: Iron Golems

Have you heard the warcry that went up across the Mortal Realms? Want to make your Iron Golem warband look …