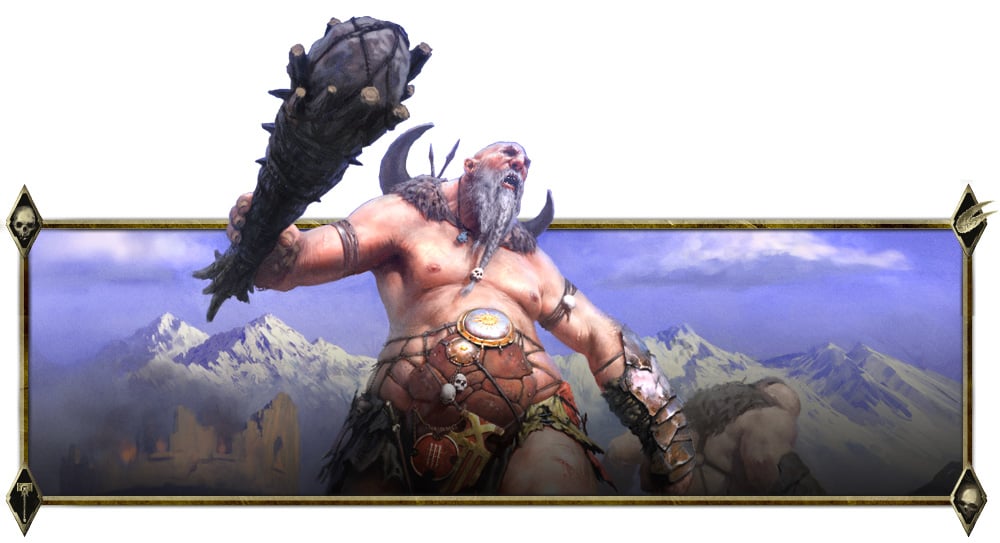 If a single gargant can smash a house apart, just think what a whole army of them is capable of. Imagine some of them are TWICE as large as the gargants you’re used to! Now, they’re organising into coherent forces, and the races of man, duardin, and aelf are in for a reckoning as the Sons of Behemat rise up to punish what they see as upstart pipsqueaks across the Mortal Realms. Today, we’re taking a peek at some of the rules for these massive monsters in your games of Warhammer Age of Sigmar. 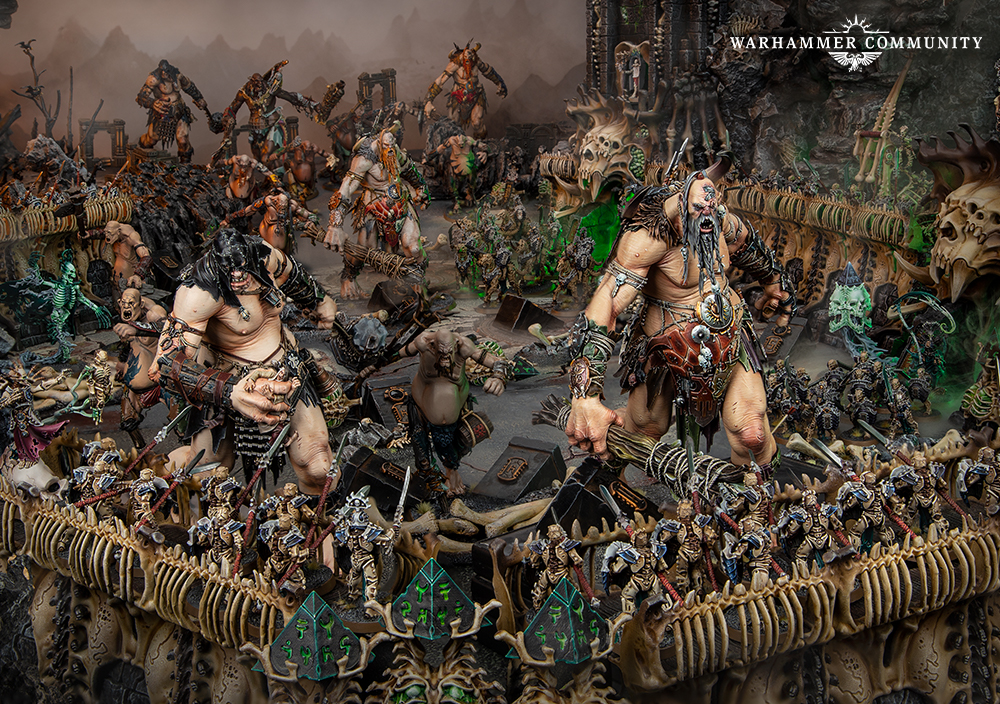 All Mega-Gargants share the same basic profile, and… wow, is it impressive. 35 base wounds blows everything else in the game out of the water. Archaon Everchosen, for example, has 20 and he’s the greatest champion of the Dark Gods! 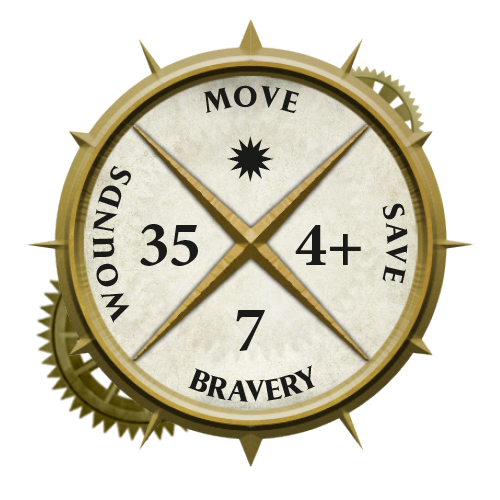 In fact, they’re so large and tough that weapons and spells that would slay even the greatest of warriors merely graze them.

They’re not about to go down easily, at any rate. Your opponent will have to devote time and attention to taking them out, sparing the rest of your army a lot of harassment. If you have more than one, woe betide your foes.

If your enemy DOES manage to kill one, they just might regret it anyway. Let’s just say they won’t want to be standing too close, and with a threat range of up to 8”, ‘close’ is pretty far away.

Every Mega-Gargant is an absolute beast in melee combat, but each of the three Mega-Gargants is a bit different, and it pays to figure out which one you like best.* Gatebreakers are a bit faster, for instance, while Warstompers are better at, well… stomping stuff up close and personal! Let’s take a look at each one in turn. 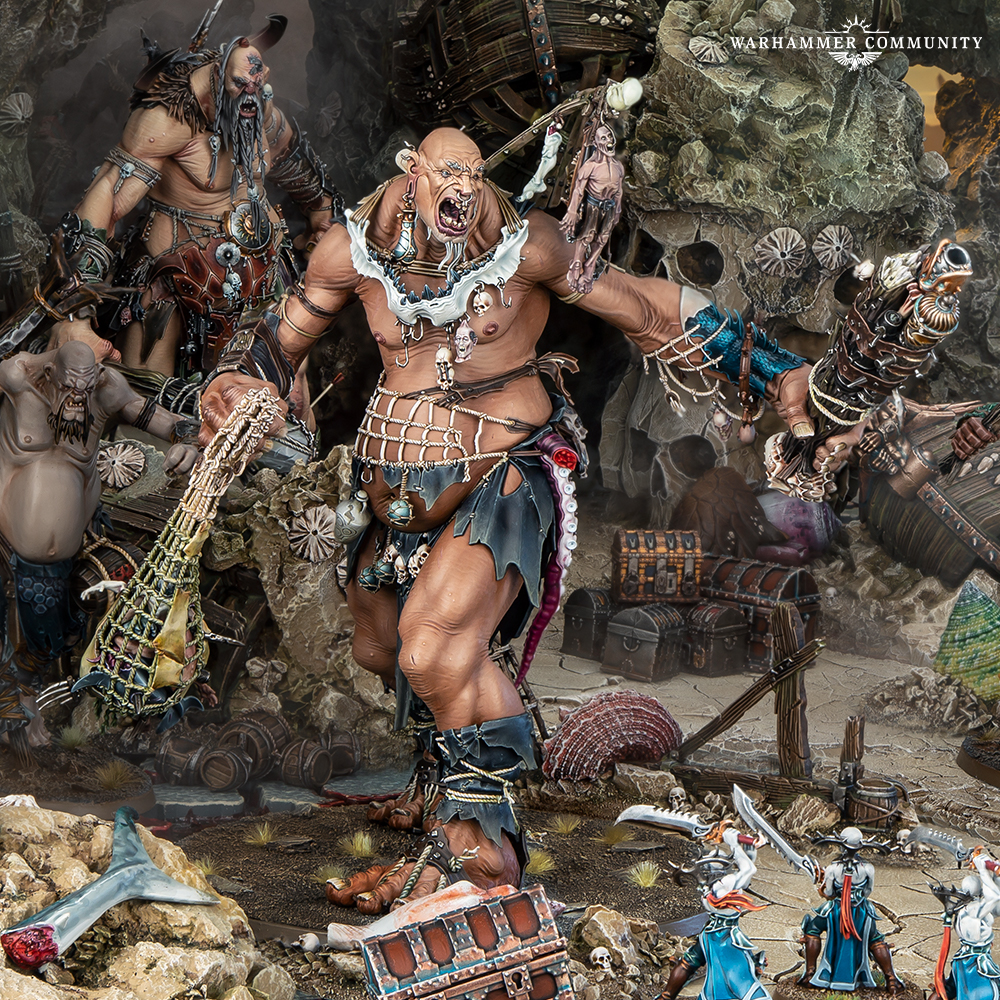 The most cunning, territorial, and greedy of the lot, these coastal raiders are also the most balanced.

What will REALLY terrify your enemies is the Kraken-eaters’ notorious tendency to cram ‘little’ trinkets, shiny things, and possible foodstuffs into their nets for later. It just so happens that enemy soldiers fit the criteria.** 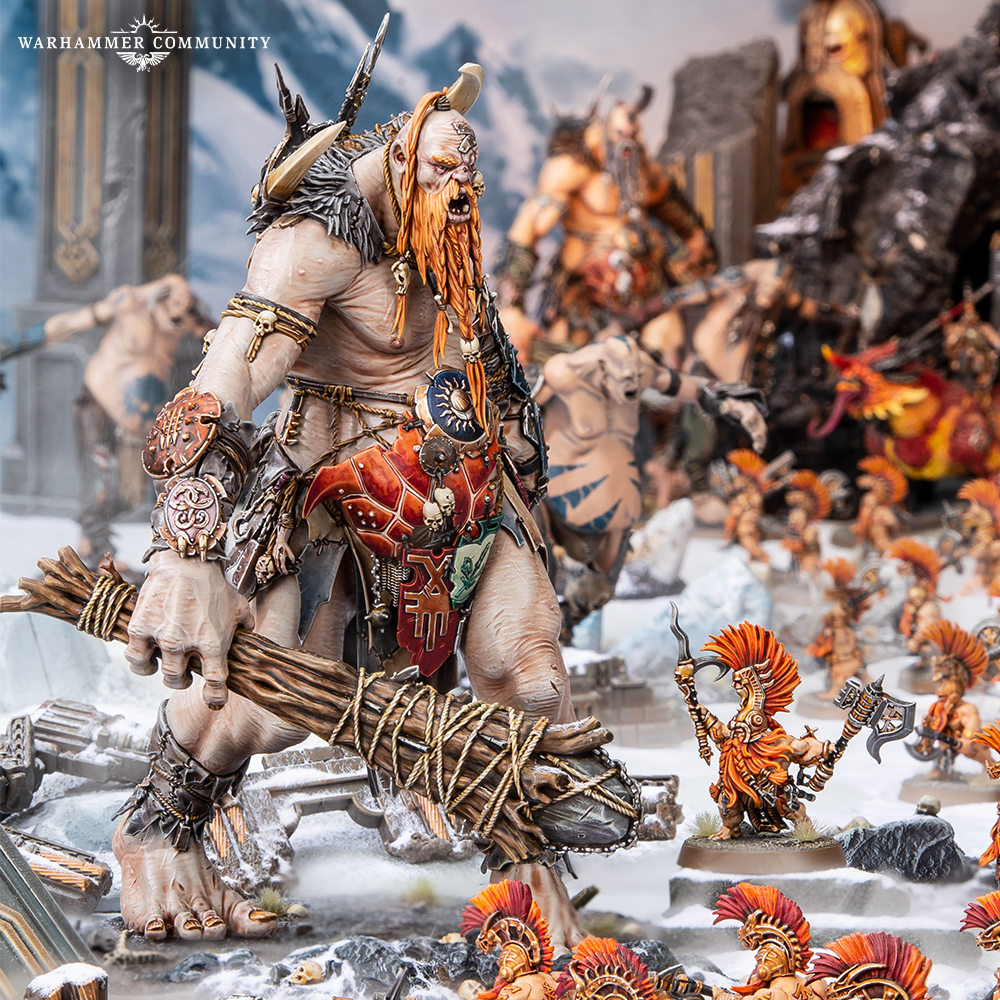 Picking fights for the love of battle is what Mega-Gargants are all about, and Warstompers enjoy nothing more than rampaging through formations of troops and enemy battlelines. They use their hands, feet, and anything they can pick up to pummel the puny soldiers swarming at their feet.

Talking of picking things up, Warstompers are even known to grab and throw their opponents around the battlefield, just because they CAN! 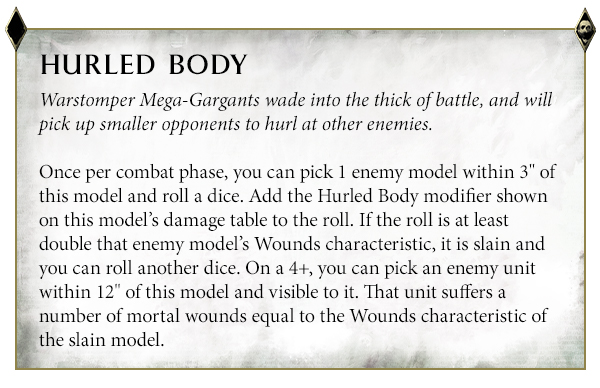 Warstompers like to find the biggest group of enemies, wading directly into the middle of them and swinging their truly massive clubs, sending mangled bodies flying in all directions. 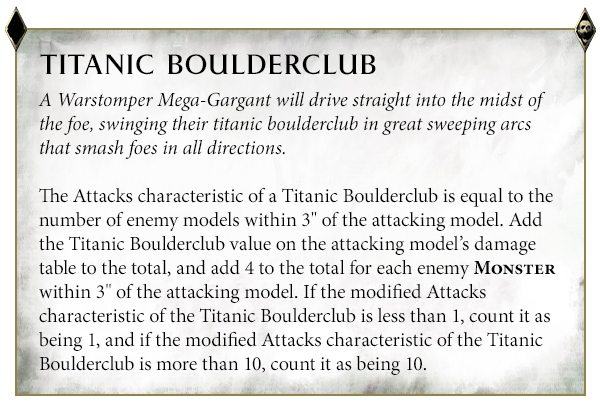 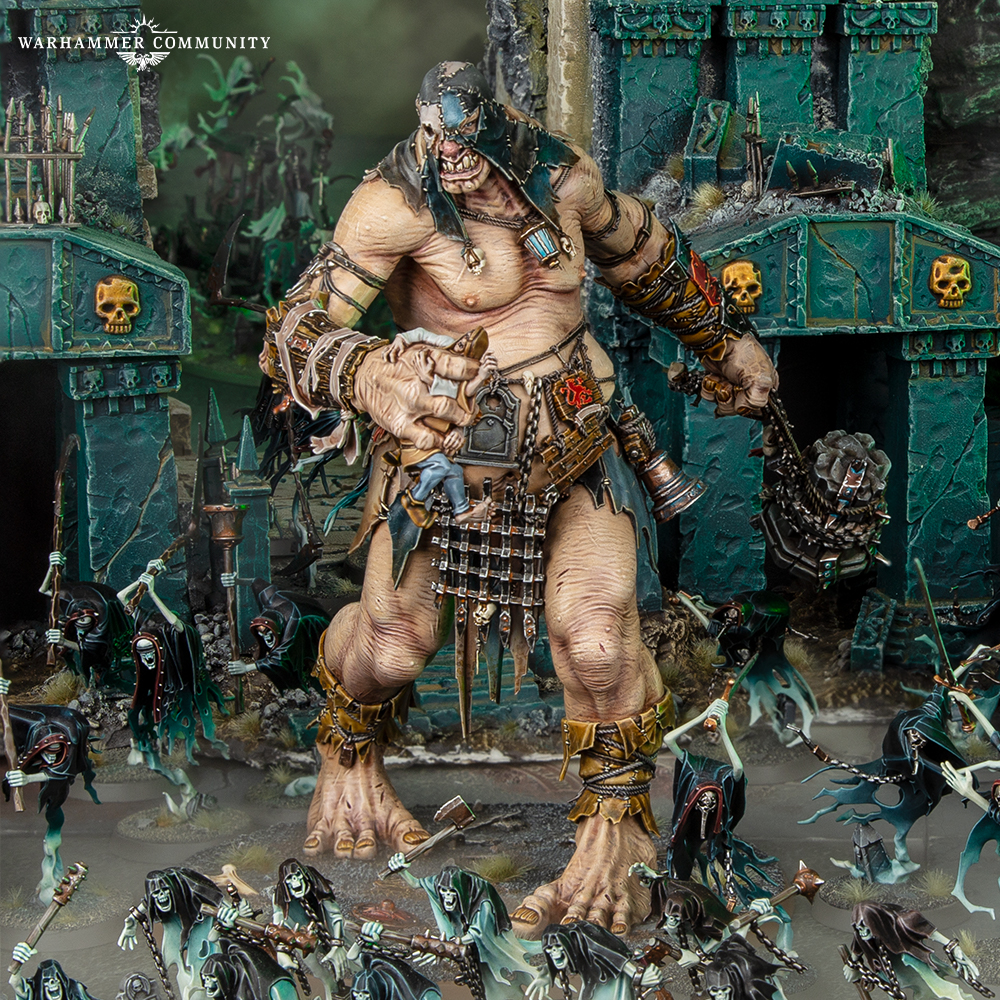 These sinister Mega-Gargants are driven by the urge to tear down the mightiest works of civilised races. They enjoy the irony of using the rubble as a potent weapon in its own right.

On the tabletop, any nearby terrain feature is a prime target for their rage – even better if weakling creatures are trying to hide in it. 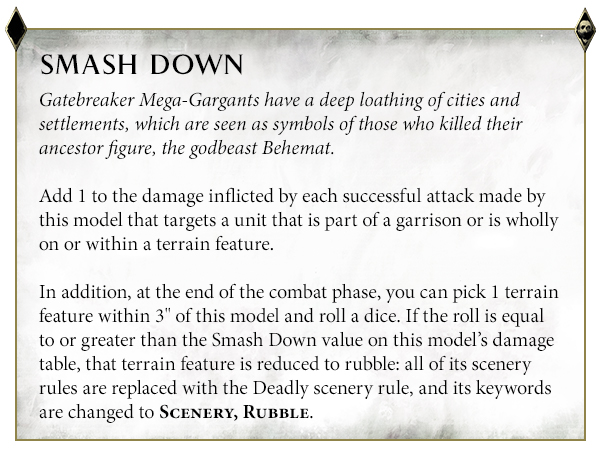 The rise of these Mega-Gargants has had a powerful effect on the lesser kin who eagerly follow them into battle, offering renewed purpose and inspiring them to further acts of violence.*** 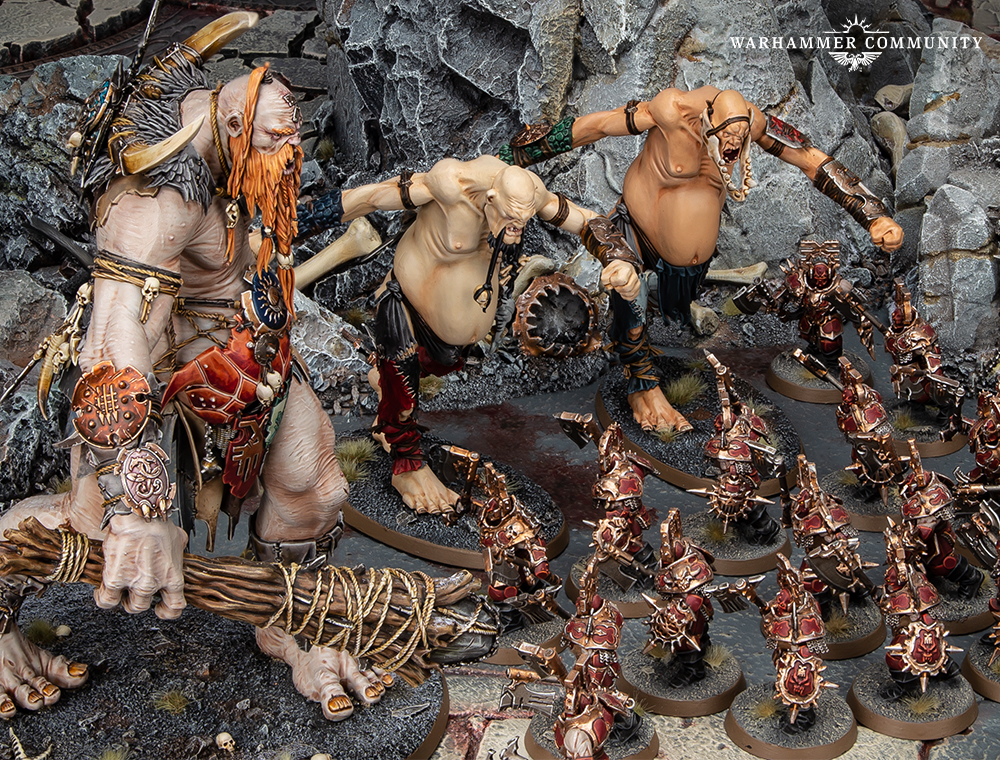 Mancrusher Gargants are similar to the more common gargants found in the Mortal Realms, such as the Aleguzzler, but they are far more focused and reliable. 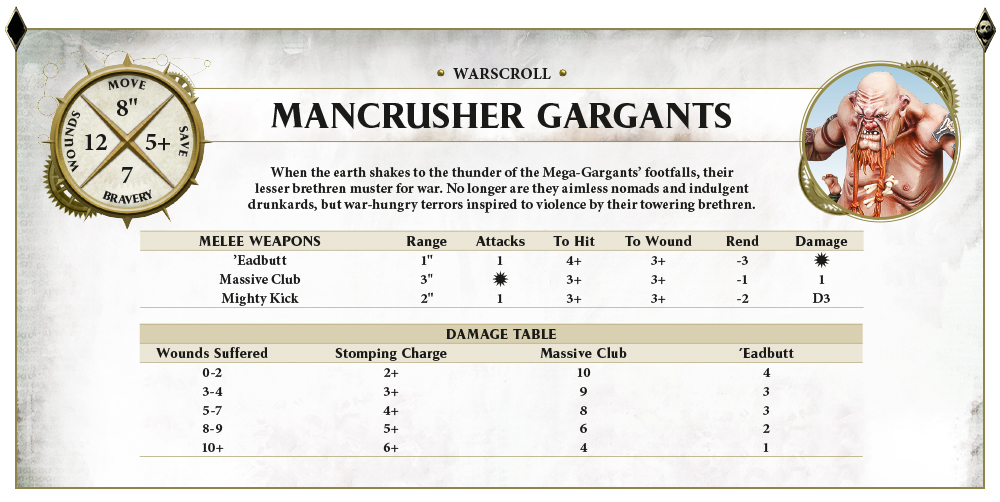 They also gain a Stomping Charge ability, which allows them to cause damage even before they start swinging their massive club. 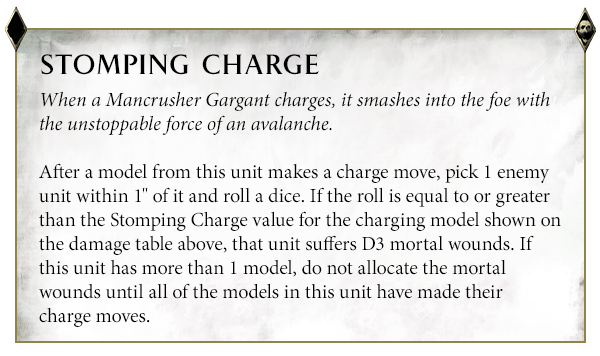 As if these improvements weren’t useful enough, the bellowed command of a Mega-Gargant general unlocks a devastating Battle Trait for your Mancrushers. 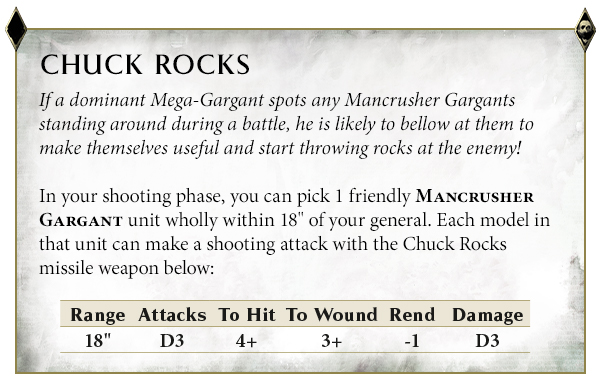 You’ll have to wait for Battletome: Sons of Behemat to see the complete rules for gargants – it’s available for pre-order from Saturday, along with the new Mega-Gargant and Mancrusher Gargant kits. We’ll be talking about the Sons of Behemat all week, so check back later to learn more about these epic new monsters. Make sure you join us on the Warhammer Age of Sigmar Facebook page to let us know which of the Mega-Garagants is your favourite.

* Of course, if the Mega-Gargants themselves ever ask you, tell them that you like ALL THREE of them the most – you’d better not upset any of them!
** It’s best not to think about what happens to them next.
*** Don’t let the Mancrusher Gargants hear you refer to them as lesser kin though!

The most famed Sons of Behemat wield their very own artefacts of power – come see a few of our favourites.

Take a closer look at the biggest, most impressive monster kit the Mortal Realms has ever seen.

Three lucky members of the Warhammer Community team got their hands on Mega-Gargants to paint – check out the results!