Our Combat Patrols 2: The Patrolening

We’ve been working on even more wonderful Combat Patrols! Check them out if you need inspiration for your own – or just fancy seeing some cool models.

The Omnissiah called out to me! Now, I don’t speak binharic, so I just interpreted their will as “build me a Combat Patrol”.

So I took a look at the Engine War book to get some inspiration – I knew I wanted a fast and a mobile force with a strong narrative element to it. When I read the rules on making your own forge world, the Rad-saturated Forge World piqued my interest. I had a vision of an Adeptus Mechanicus force that existed on a world so toxic that they were playing an endless game of “the floor is lava”, because… it is.

A force of floating tanks and flying troops was the goal – Skorpius Duneriders to transport my Skitarii Vanguard and Pteraxii Sterylizors to cleanse the skies! 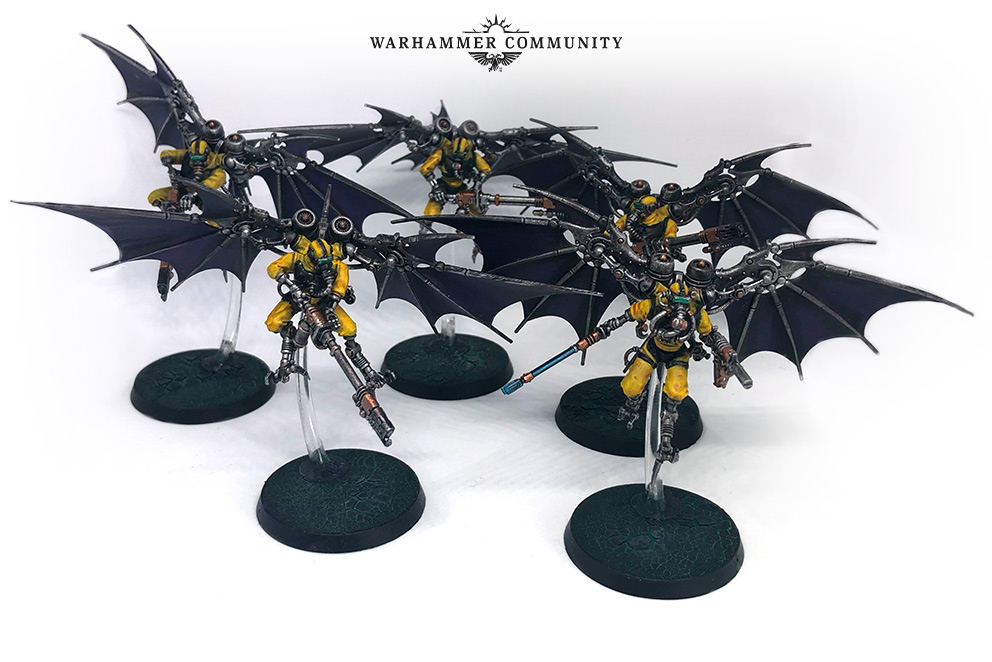 This was my first army project where I used a colour wheel to help with the painting scheme,  choosing purple and yellow as complementary colours. I’m quite a laid-back painter, so I knew I wanted to keep it relatively simple. I went with Shyish Purple with Phoenician Purple highlights and Iyanden Yellow with Yriel Yellow highlights. For the metallics, it was simple: Ironbreaker with a Basilicanum Grey to shade it and Balthazar Gold for accents. 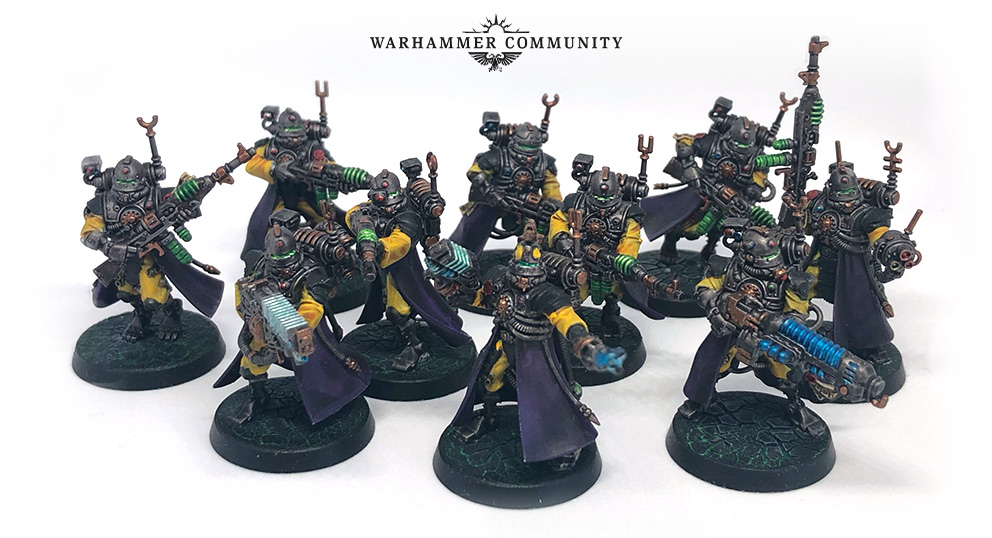 For the bases I wanted to reflect the aforementioned radiation-saturated world. A layer of Warp Lightning and the Texture paint Mordant Earth provided a suitable aesthetic. 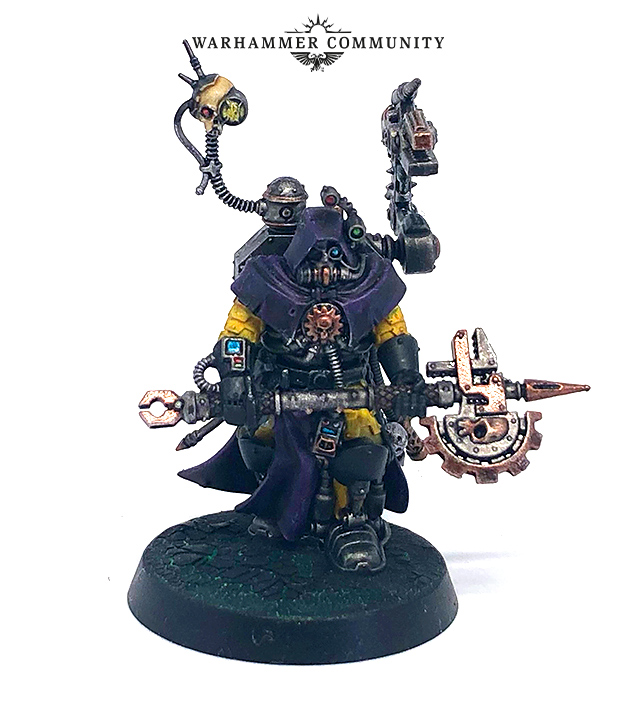 My Combat Patrol is now complete and I can’t wait to get some games in! Lockdown has been hard but the idea of getting together and playing Warhammer with my friends has kept me positive and productive in my hobby. 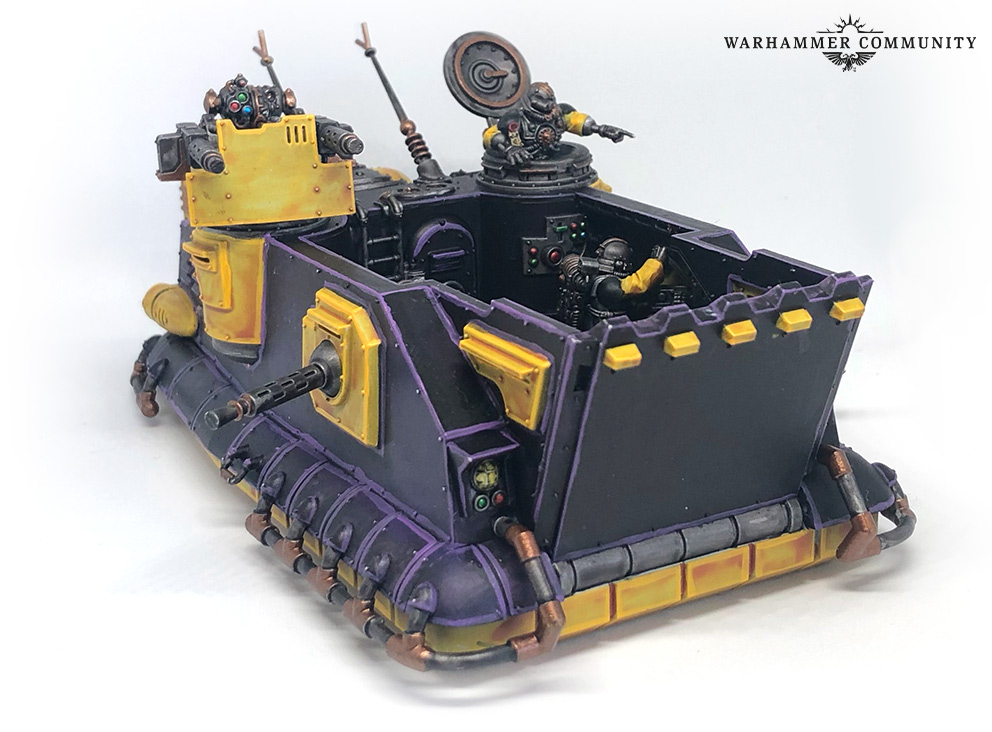 Now all I need is to come up with a suitable name for my forge world force and write some backstory for them. If only naming them was as easy as painting them…

I am fairly new to the grimdark world of Warhammer 40,000 – I have spent much of my hobby time in the Mortal Realms, so when picking a Combat Patrol for Warhammer 40,000, I knew it needed to have at least just a pinch of magic. 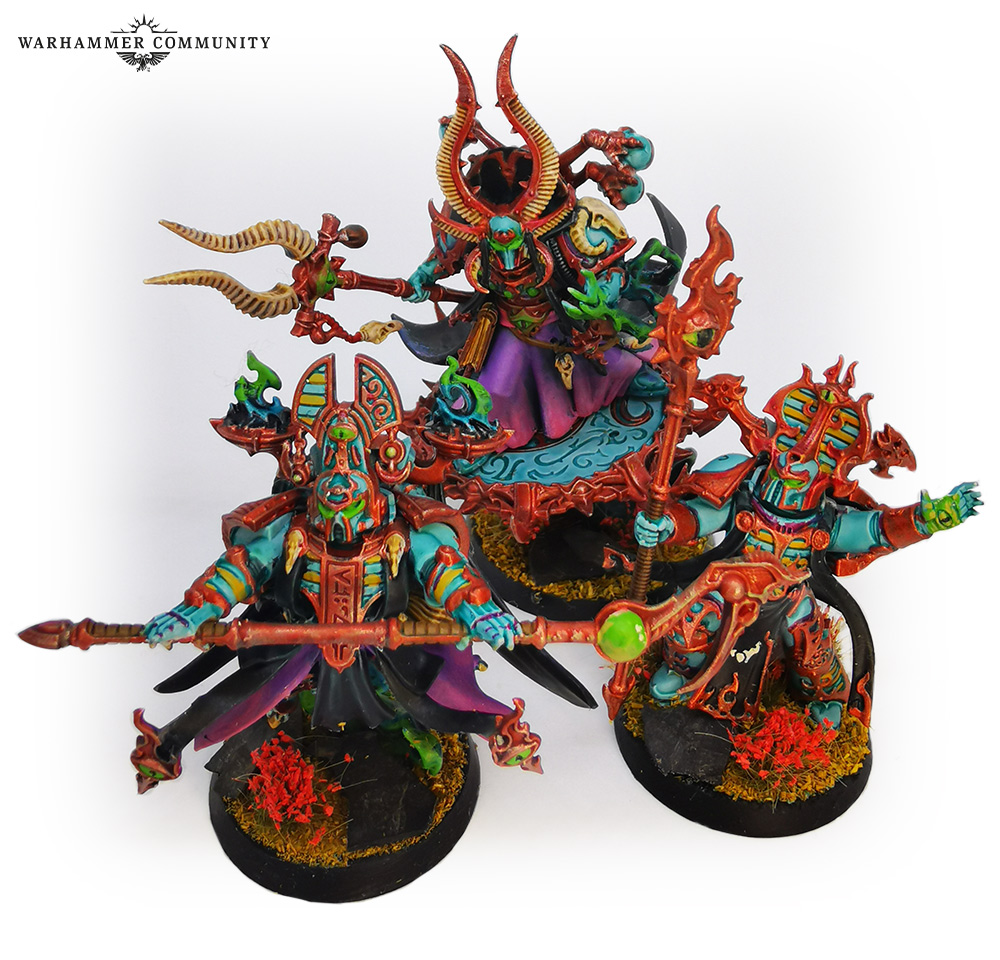 I adore the shade of rose gold – these are my rose gold-inspired Thousand Sons Patrol Detachment, from the Hermetic Blades (with a slight twist). 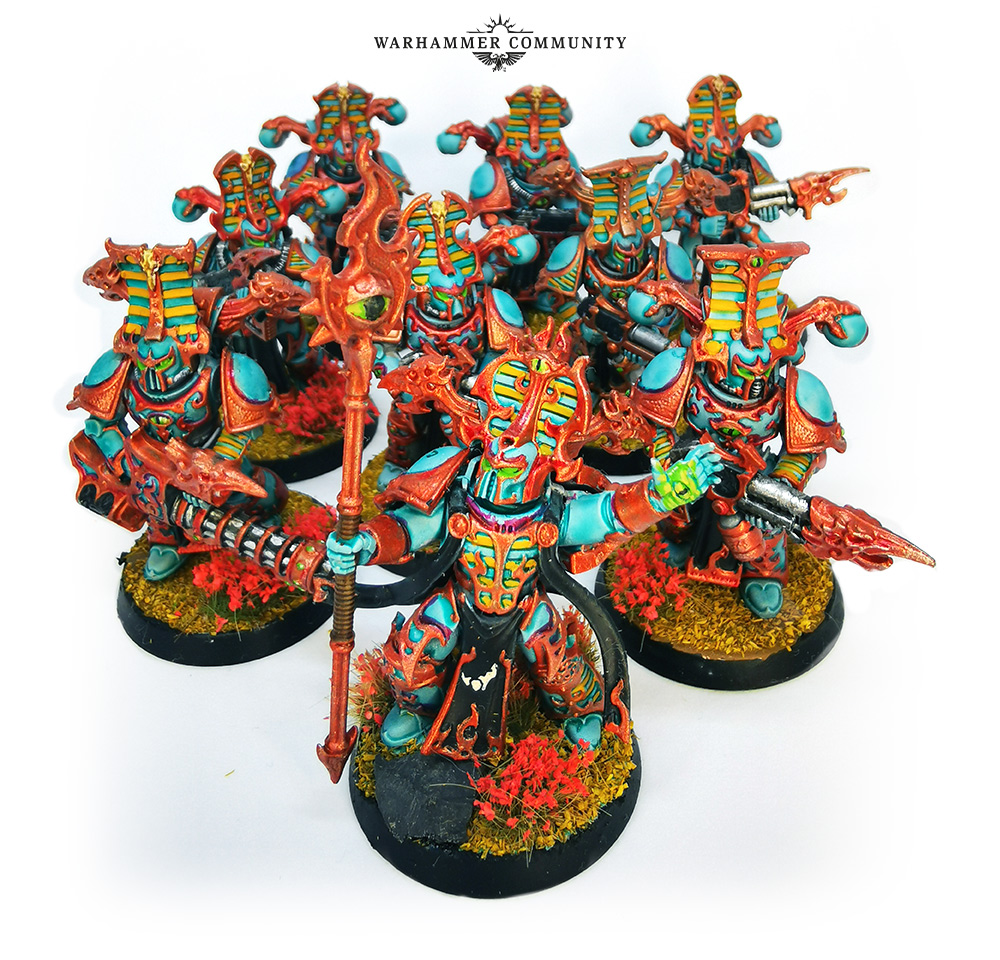 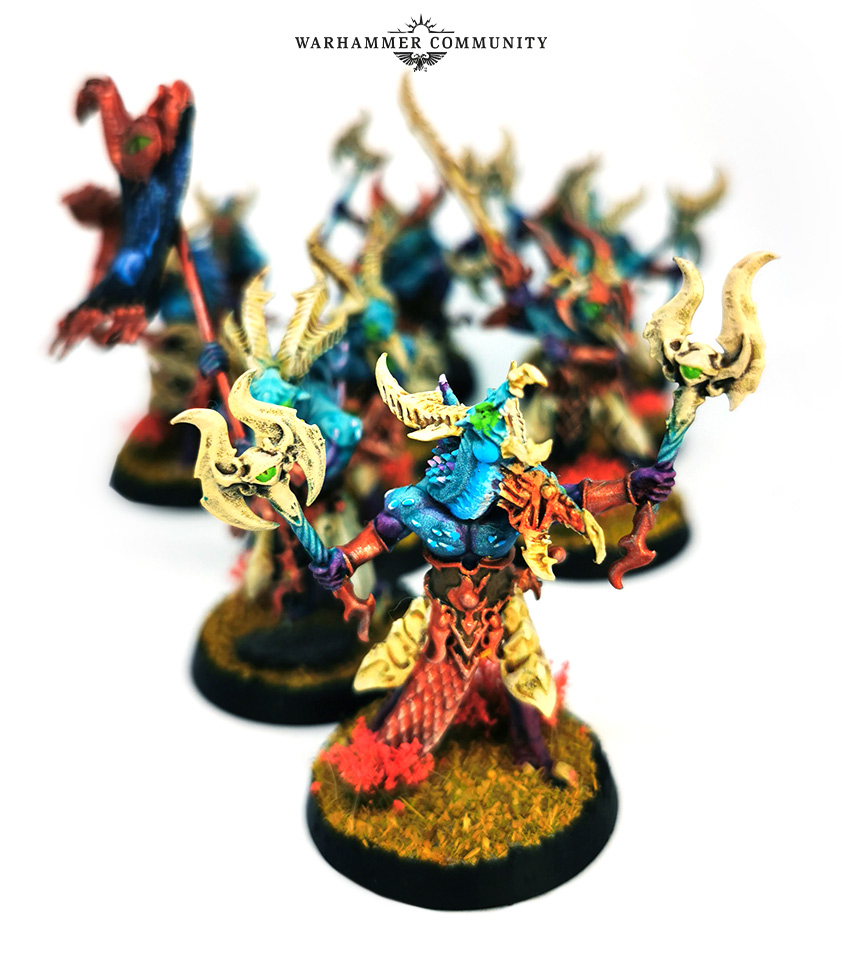 I began to adorn their armour with the blush tones of rose gold over the regular gold. This is mirrored throughout the patrol to really tie them together – I added more colour as I began the painting journey, layering different shades of pinks, blues, purples and green.

The patrol is led by the Arch-sorcerer, Ahriman, who helps them really pack a psychic punch. I really enjoyed painting his and the Exalted Sorcerer’s cloaks to make them look like galaxies, giving them an air of galactic conquest by showing the star systems they have already ravaged. The galaxy effect was created by building layers of colour smudged onto the cloaks. 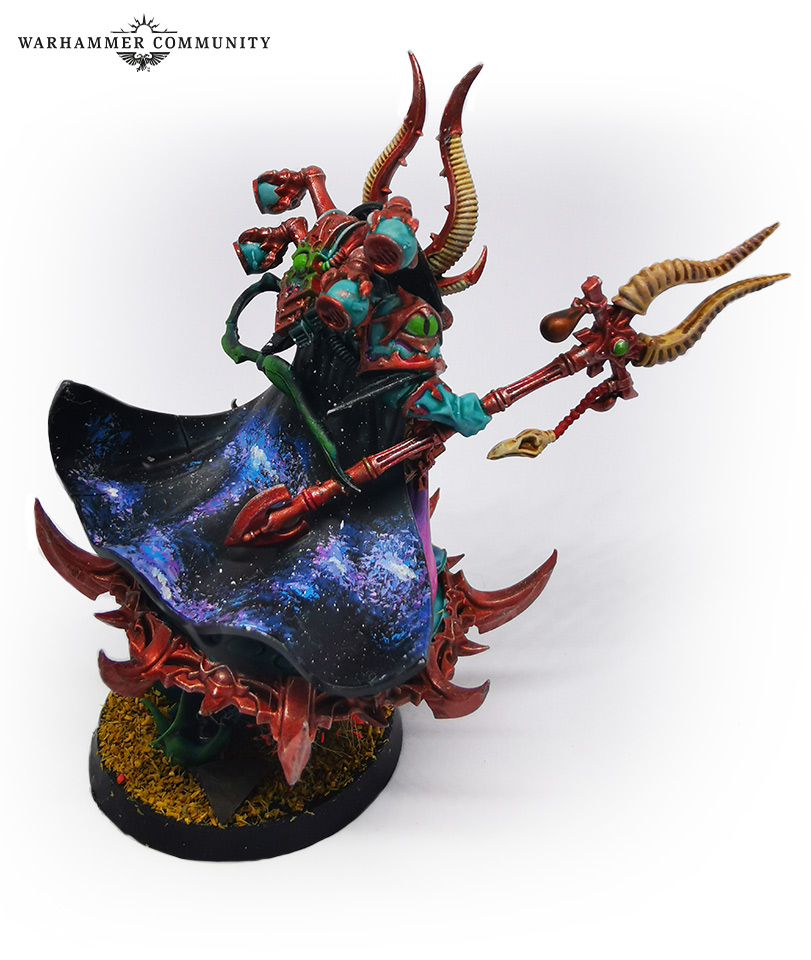 Painting a Combat Patrol is a great way to get into the hobby, and I can not wait to see mine in action on the tabletop!

As we all know, the Deathwatch offers a unique opportunity to create teams of Space Marines from disparate Chapters that we might not have painted or played with before. You might never have painted a Salamander because you don’t have a Salamanders kill team or army, but here you can paint just one in the black and silver livery of the Ordo Xenos’ forces (so, just the shoulder pad then, really).

On the other hand, you can use the Deathwatch to create units based on your favourite Chapters and stick to the heroes who have long piqued your hobby interest. I took the latter approach here. I have a 5-man squad all made up of individuals from Blood Angels successor Chapters. I’ve got a Flesh Tearer, a Lamenter, a Blood Drinker and even a Knights of Blood character (who can serve as a Blackshield if I want him to), led by a Blood Angels Sergeant. I had loads of fun painting those shoulder pads, and even more fun painting all those swords.

I also painted Captain Artemis, which was a real treat considering the 3000 points of Mortifactors I have in my carry case. And, finally, as someone old enough to remember them, I used this as an opportunity to paint a Rainbow Warrior, albeit in the form of a lascannon-wielding Dreadnought. They may not have had much press since Rogue Trader came out in the late ‘80s, but I always think they’re worthy of a cameo. 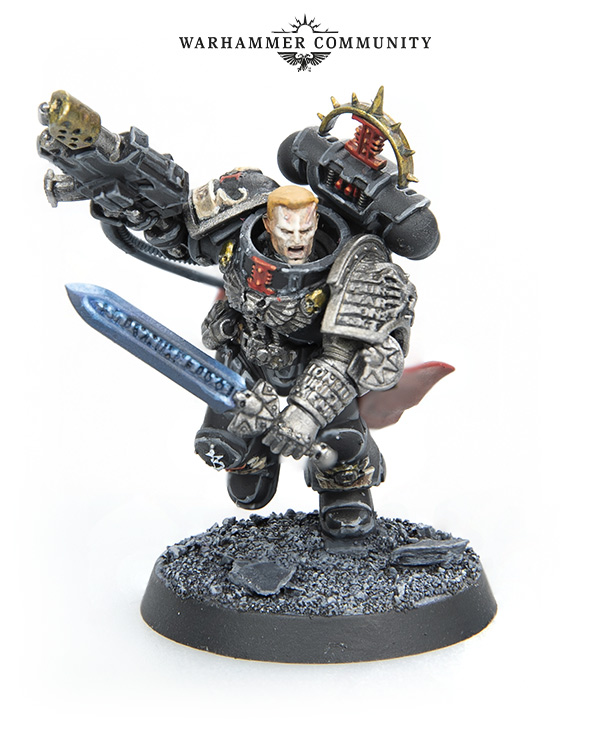 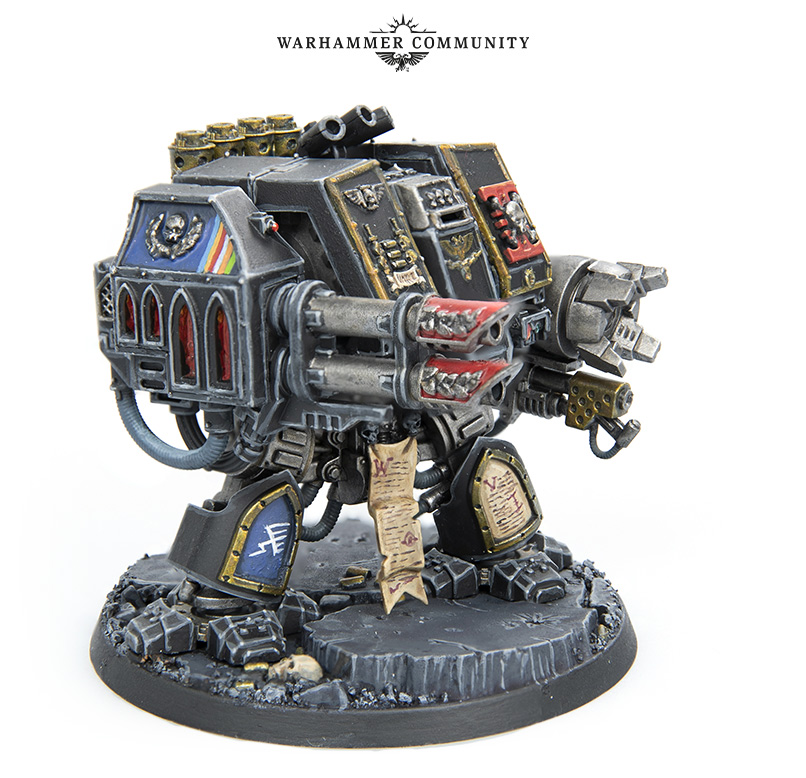 And that’s about 25 Power in Deathwatch form. After picking up a Start Collecting! box, I still have a squad left over! It’s a small force, but each unit packs a mighty punch – while they’ll often be outnumbered, they’ll rarely be out-gunned or out-… sworded? Can you be “out-sworded”? Well, if you can be, these guys won’t be! It’s a manageable force that has a lot of fun elements, and it’s going to be a treat to build this force up over time and take it into the new edition.

Thanks, folks!  You can see even more cool models with our previous look at Combat Patrols.  Are you starting a Combat Patrol? We’d love to see it! Show us your work on Instagram and Twitter with #New40K or on the Warhammer 40,000 Facebook page.

Get inspired for Combat Patrol with some top picks from our teams!

Get ideas for your own Combat Patrol with top examples from our teams!

Learn all about an exciting and fast new way to play Warhammer 40,000.