Welcome, warrior, to the feasting hall of the Fang, where the sons of Russ celebrate victory over a greenskin horde. Yet all is not well, and a prophecy awaits that will alter the destiny of the Space Wolves. The Beast is rising – and one warrior is fated to stand against it…

Harsh and heartfelt laughter filled the cavernous hall, underlined by the warm and merry crackling of the fireplaces that lit the vast space in their orange hue. Around an enormous wooden table, carved with intricate knotted designs and heavily laden with meat and drink, accomplished warriors sat and raised their horns in another toast; the Space Wolves were celebrating their latest great victory.

‘…and then I grabbed that damned Ork by the scruff of the neck,’ Gillir Thunderstone bellowed with a level of glee that reached his bionic eye, ‘and threw him right into the jaws of the Fenrisian Wolves! I swear that wretched xenos howled louder than the pack!’

Another wave of cheerful laughter ran through the feasting Space Marines, and overflowing drinking horns clashed together. At the head of the table, the Great Wolf Logan Grimnar listened to the war stories of his warriors and smiled. Even in these dire times, the courage and spirit of his Chapter remained untarnished. He took another sip from his horn and adjusted the huge grey pelt around his shoulders as his eyes wandered along the table. His battle-brothers were in high spirits after facing and defeating a powerful Waaagh! that had amassed in the Javarian Sub-sector. After everything the Chapter had been through in the last century, it made Grimnar even prouder that the Wolves still fought on, defiant and unrelenting.

He paused for a moment as his eyes met those of Alvari Gloomwolf. Despite the generally cheerful sentiment in the great hall, the old Rune Priest honoured his name; his icy-blue gaze was filled with dolour beneath his grey woollen hood. Grimnar wasn’t the only one to notice.

‘Do you not celebrate with us, Brother Gloomwolf?’ Gillir asked loudly. ‘Do you not drink to the fallen and laugh with the living?’

Alvari averted his eyes. ‘There is nothing to celebrate, brother,’ the old priest murmured. These few words had an instant impact on the atmosphere in the room, and the temperature seemed to fall.

‘Nothing to celebrate?’ Gillir growled. ‘Did our brothers die for nothing? Did we free the Javarian Sub-sector for nothing?’

Alvari rose and thoughtfully stroked his long, braided beard. ‘I am sorry, Thunderstone. I did not mean to disrespect the fallen.’ He then turned to address the Great Wolf, who had been silently watching the exchange. ‘A great victory against the Orks was had, Lord Grimnar, it is true, but my visions remain troubling to say the least. However, this evening is not the time to speak of it, for it is indeed a time to celebrate, even if it is not a celebration I wish to be part of.’

With these words, the old Rune Priest made for the huge metal doors guarded by two Chapter serfs in grey robes and furs, who opened them for the venerable Space Marine.

‘So you do disrespect our fallen then?’ Gillir snarled, rising from his seat.

‘Enough,’ Grimnar snapped. ‘Speaking to a Rune Priest like that? There is but one in this room who is disrespectful.’

The rest of the Space Wolves around the table murmured, but they were cut short as Alvari Gloomwolf suddenly whirled. Lightning danced around the glowing eyes of the Rune Priest, and his voice boomed.

‘You know nothing of the things to come, Gillir Thunderstone,’ he bellowed. The room seemed to become darker as the Rune Priest strode towards the table again. ‘The victory in the Javarian Sub-sector was futile. The greenskins will return, stronger than ever before.’

A chill wind howled through the great hall, and the flames in the fireplaces turned green and blazed higher, casting black shadows on the masonry that reminded Grimnar of brutish warriors.

‘Green trolls are rampaging far and wide,’ Alvari shouted. His voice was underlined by distant echoes of savage roars and the thunderous firing of ramshackle guns.

‘A green tide is roiling the endless seas. Uncountable are the ships that are sinking, uncountable the warriors that drown in the devastation wrought upon them by the king of the trolls. Upon his throne of dark metal he throws back his horned head of adamantium, laughing with savage glee. He shouts for more and in response his warriors come. Like a cyclone he draws them in, the green king of kings preparing for his ultimate war.’

Logan Grimnar slowly rose from his seat, his hands on the table. The wood felt reassuringly real and natural under his touch, while the rest of the room seemed to lose itself more and more in the howled prophecy of Alvari Gloomwolf. The Great Wolf and his warriors watched with furrowed brows as the Rune Priest continued his violent storm of words. 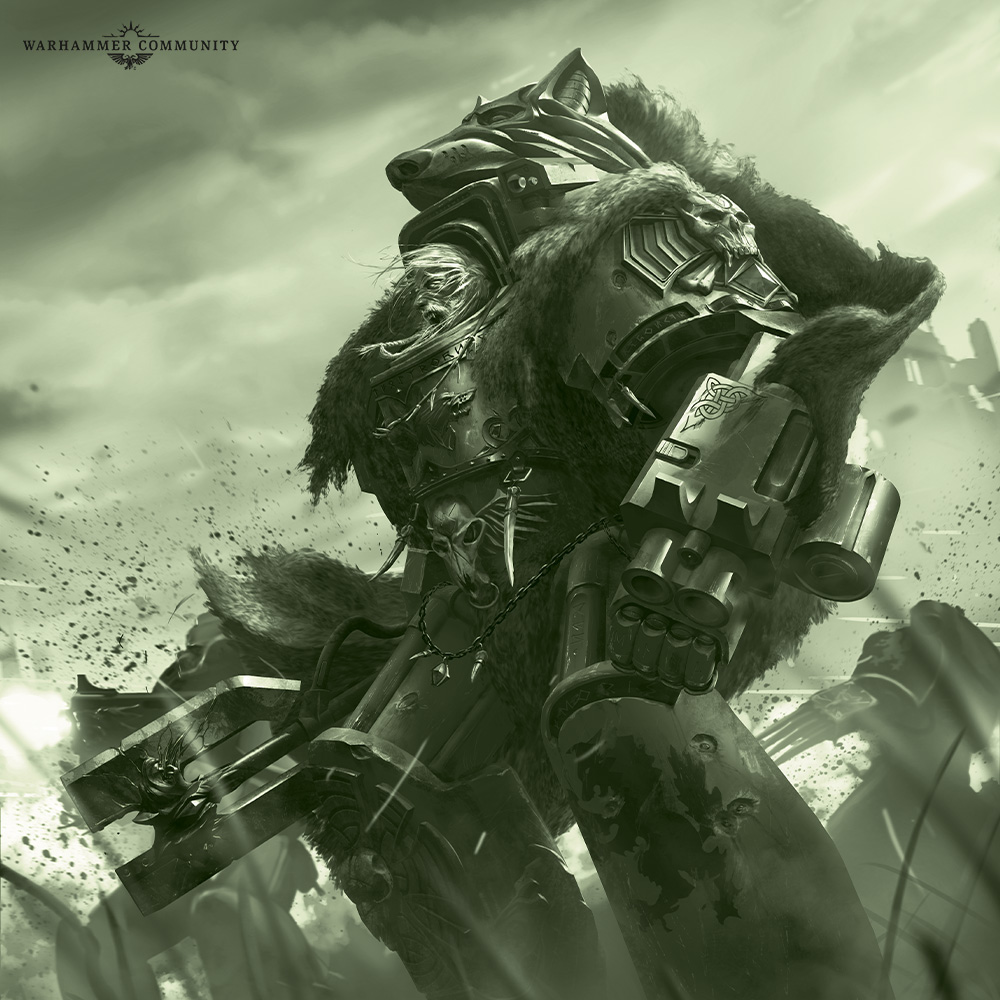 ‘His roars spell the death of billions as his anger spills forth into world after world. Everything is swept away before the wrath of the green king, who is feared even by his own kin. A ragged banner with the black horns of the bull rises, and fire and doom rain upon Mankind. Weep! Despair!’

Suddenly, the flames in the great hall turned icy blue. Other shadows mingled with those on the walls – shapes of wolves baring their fangs and pouncing.

‘But where fear raises its head, there is also defiance,’ the Rune Priest shouted, spreading his arms. ‘The black wolf comes forth from the darkness of his lair. His strike will be rash, but it will draw blood. The green king and the black wolf will meet, and there upon the precipice of death shall they do battle unto its very ragged brink. The wolf has not howled its last breath. The green king awaits. Destiny awaits!’

With these words, Alvari Gloomwolf clapped his hands together, sending a shock wave through the hall like rolling thunder and extinguishing the feasting fires in billowing clouds of choking smoke. With a last wild glare, he spun around and paced out of the room, his dark coat streaming behind him. As soon as he had left the hall, recessed emergency lumen sprung to life, drenching the hall in their red light.

The Space Wolves around the table looked at each other. Gillir Thunderstone opened his mouth, then closed it again and sat down. Logan Grimnar nodded slowly.

‘Well,’ he eventually said, ‘someone better find out where in the damned galaxy we can find Ragnar Blackmane.’

You can discover more tales from the Psychic Awakening on the website, along with a host of articles and an interactive map charting the psychic anomalies that are springing up across the galaxy. For the latest news, sign up to the Games Workshop newsletter – between that and the website, you’ll always be up to date!

The Fight of the Millennium

Two legends return, bigger and better than ever.

Get your hands on Makari now! (Plus some guys called Ragnar and Ghazghkull)

This is it, the moment that Space Wolves fans everywhere have been waiting for – your Psychic Awakening rules preview!