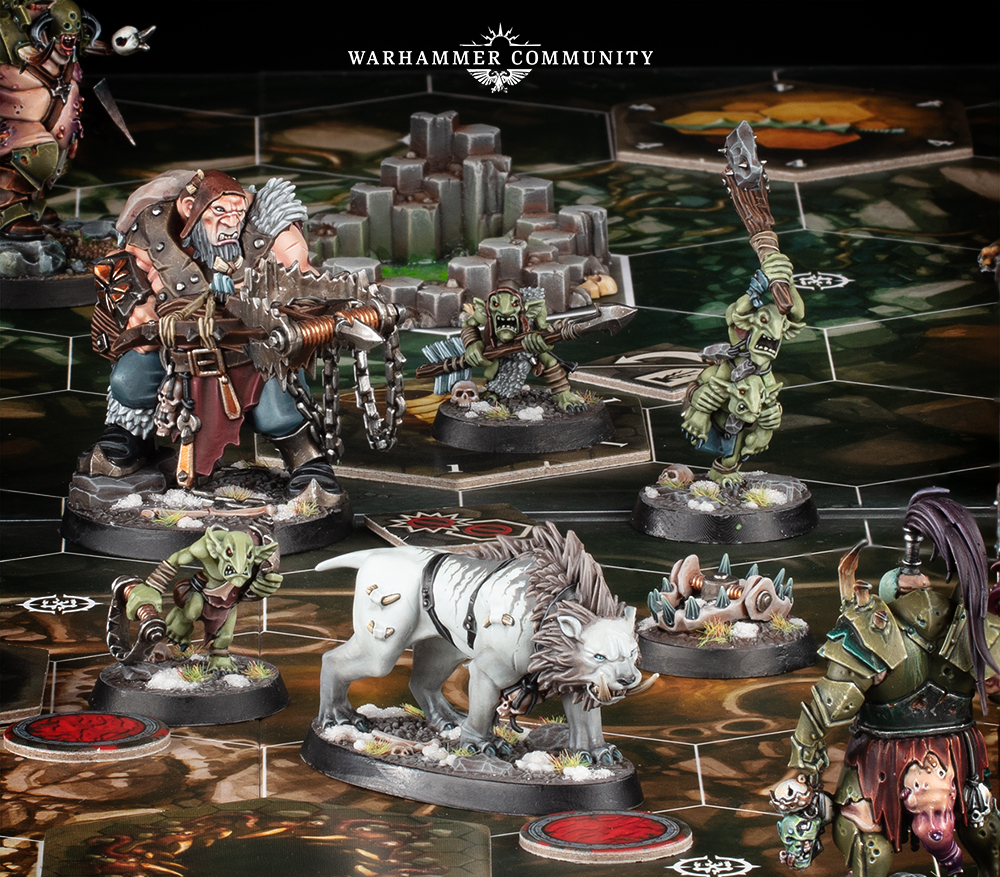 The Ogor Mawtribes have finally made their way into Warhammer Underworlds! This weekend, Icebrow Hunter Hrothgorn Mantrapper and his hunting companions will be available to pre-order – so today, we’re looking at just how they play and what cards you’re going to want to look out for…

Lured by the scent of abundant prey, Hrothgorn’s Mantrappers found their way into Beastgrave by accident after ranging ahead of their Alfrostun. Now, this hunter and his ragtag entourage seek escape and, in the meantime, snacks…

The leader of his warband, Hrothgorn Mantrapper is a juggernaut of a fighter, comparable to Mollog the Mighty but with excellent ranged capabilities in the form of his Trap Launcher. Hrothgorn is incredibly versatile, capable of slaying enemies close-up and taking them out at range. Hrothgorn, crucially, gives every enemy the Quarry keyword, allowing you to make use of gambits and upgrades that target Quarries with great effect! 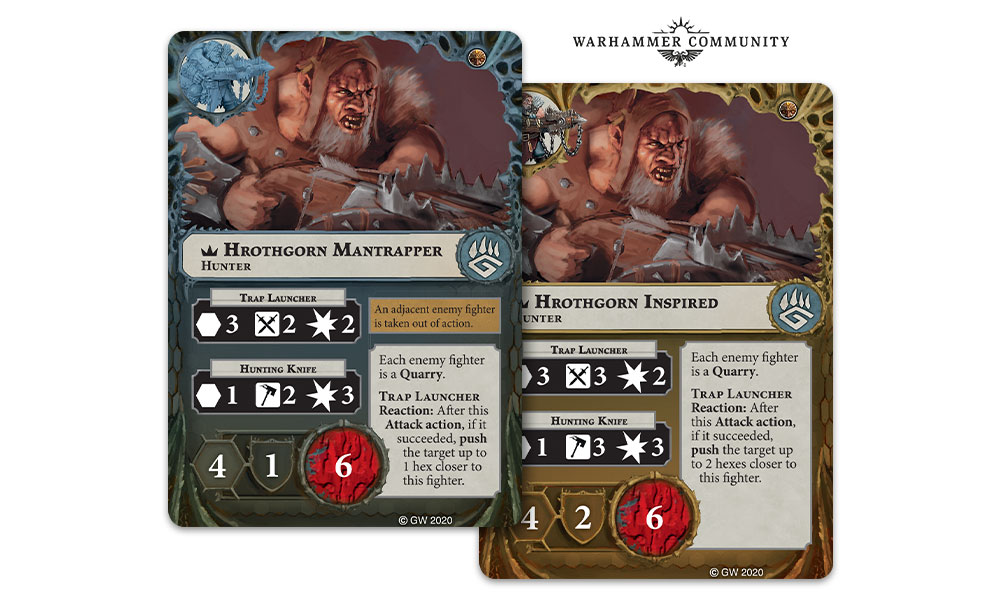 Thrafnir is a fast and slippery fighter, great for picking off far-flung enemies or, when Inspired, dealing that last bit of damage to more durable foes. Simple, quick and effective, he’s best employed when held back to the last activation of an action round, using his excellent Move characteristic to stay at arms length before making a killing strike. 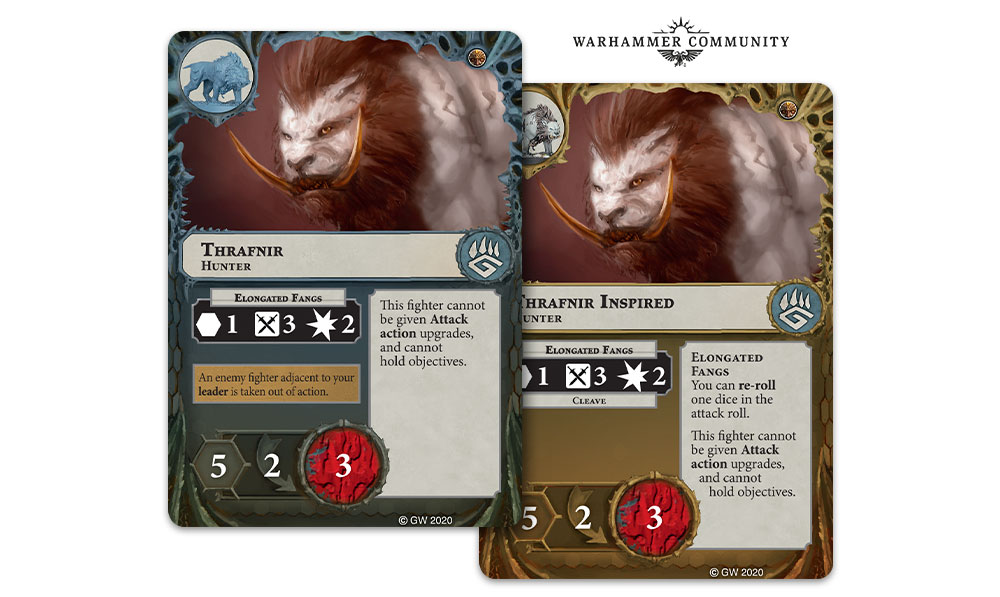 This is not just a gnoblar. At first glance, Bushwakka’s profile is nothing to boast about – but this fighter isn’t about directly attacking your enemies. Bushwakka is a trapper, meaning that after each activation, you’ll have the chance to lay down a deadly mantrap that acts like a super-charged lethal hex, dealing 2 Damage to any fighter unfortunate enough to step into it – or be dragged there by Hrothgorn’s Trap Launcher… 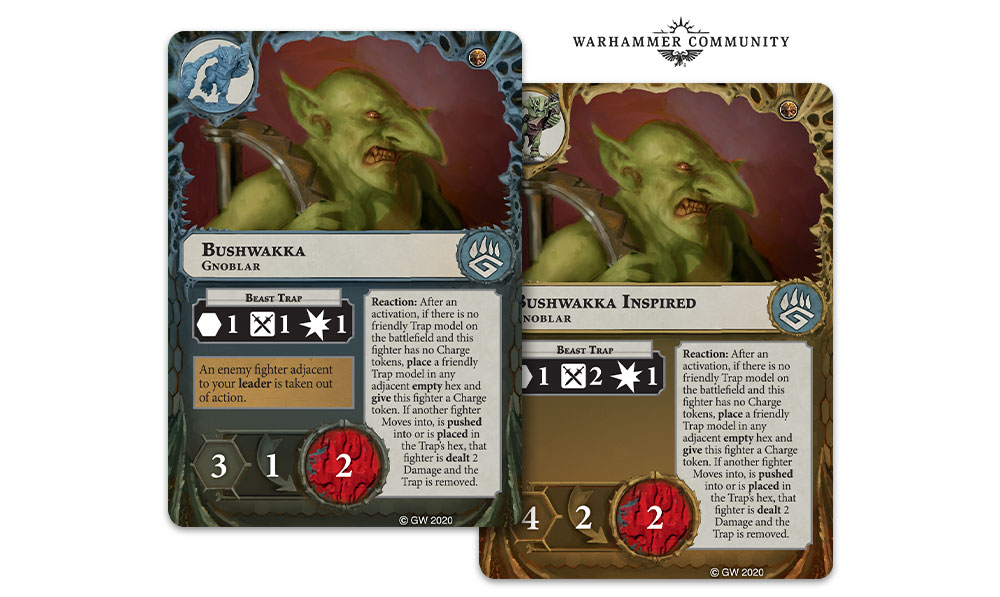 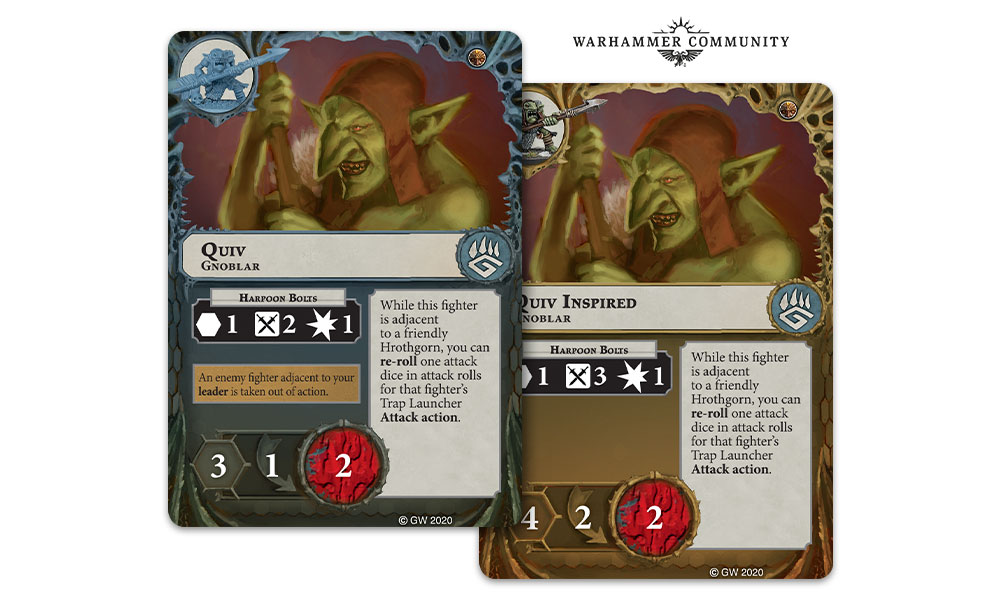 Luggit and Thwak could (charitably) be described as combat gnoblars. Where this sneaky pair really come into their own is finishing off weakened enemies by shoving foes into lethal hexes with their unique Reaction. 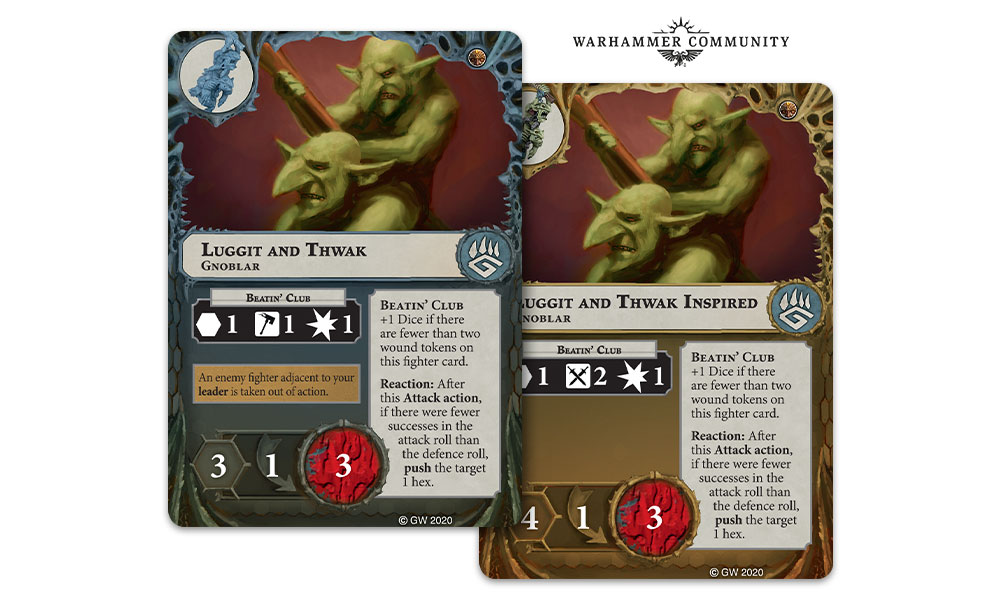 Hrothgorn’s Mantrappers are a really interesting warband, allowing for aggressive, single-fighter-focused tactics but working more effectively at range than say, Mollog’s Mob. In the early game, you’ll want to use lethal hexes and Bushwakka’s Traps to your advantage, chipping away at enemies before choosing your moment to finish one off in melee with Hrothgorn, which will Inspire your whole warband. Pick your moment correctly, and victory is all but assured! 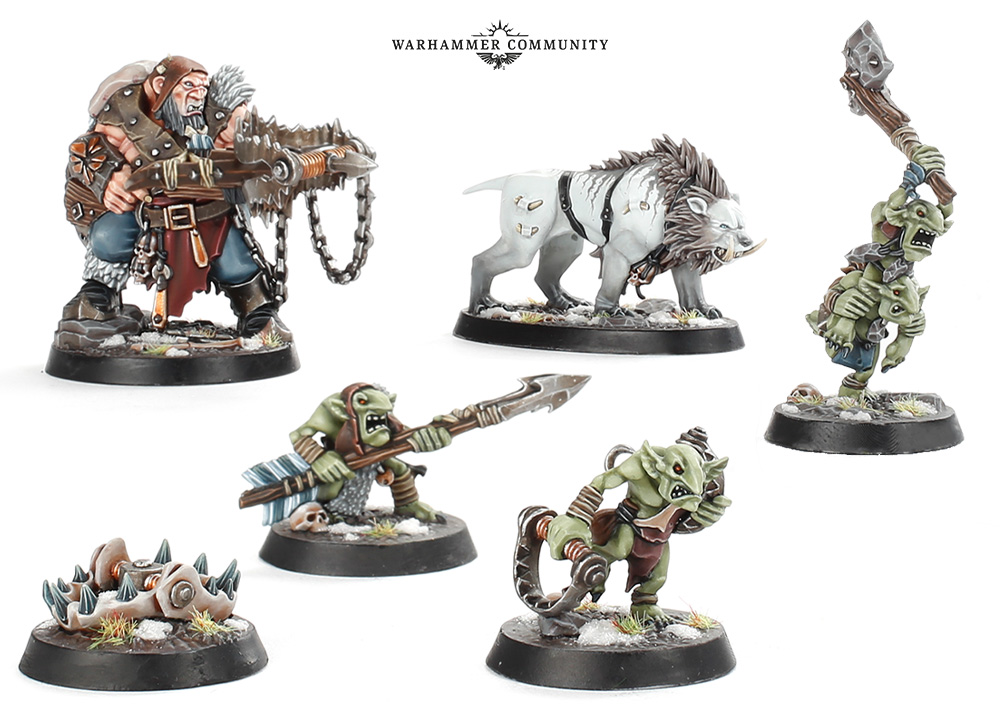 Hrothgorn’s Mantrappers are masters of the terrain they fight on. As well as being able to shove, pull and trap enemies on the board, they’ve got a couple of cracking gambits that allow them to interact with feature hexes on. More Traps, for instance, lets you flip an objective token into a lethal token, while Frozen Earth deletes an objective or feature token from the game entirely! However cunning you are, you’ll still need Hrothgorn alive and kicking to win – which is why Quick Snack is such a brilliant pick. 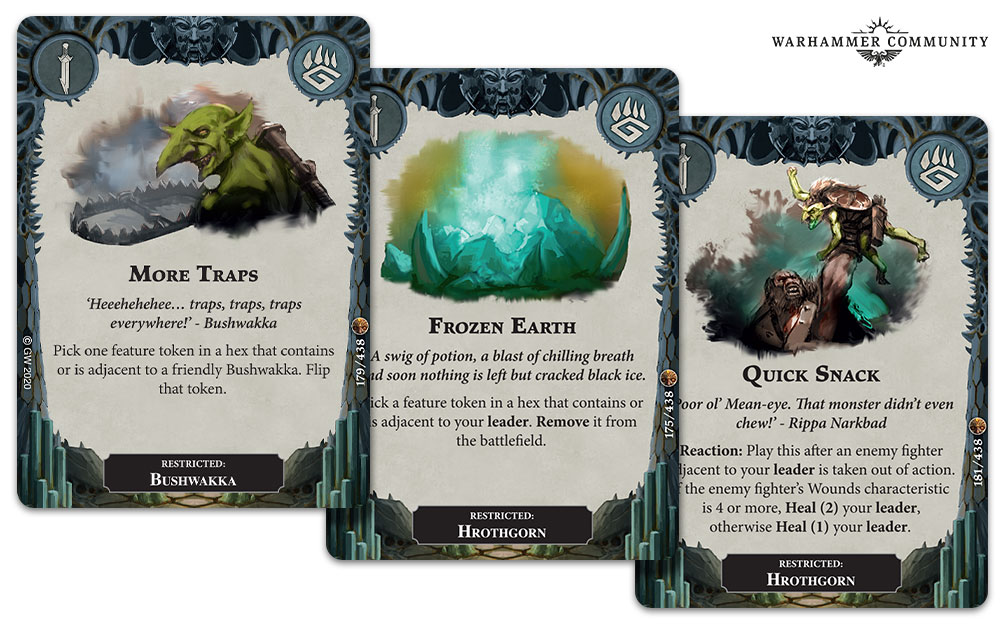 When playing Hrothgorn’s Mantrappers, you’re going to want to focus on kitting out Hrothgorn himself as fast as possible. There are plenty of solid options for this among your warband-specific cards, with Famed Hunter allowing you an ever-useful re-roll to one of your attack dice, Living Avalanche bringing your hunting knife up to a massive FOUR damage, and Veteran Hunter letting you dig into your power deck in a pinch. 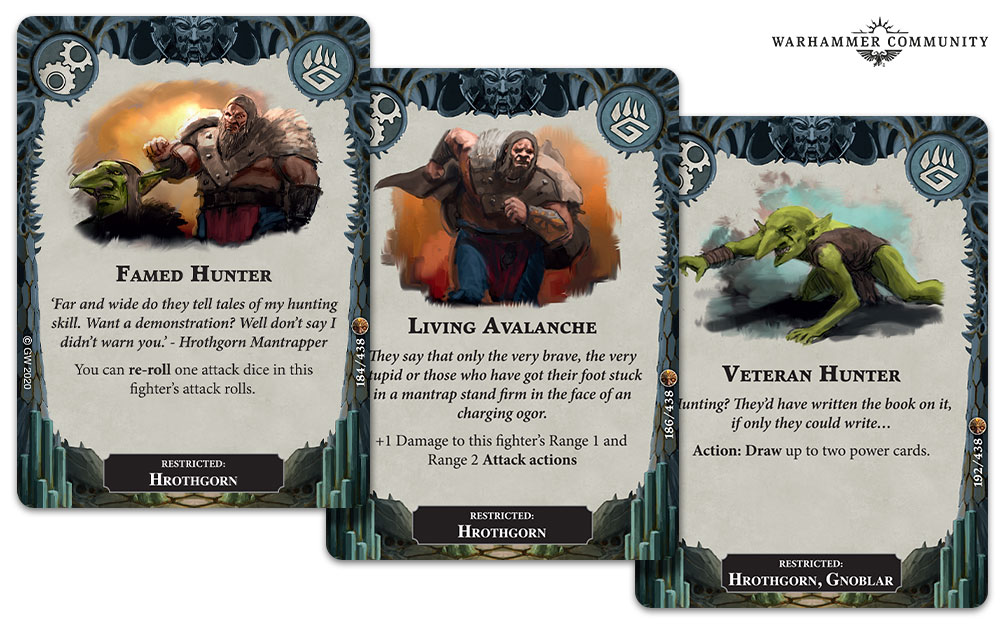 As you’d expect, Hrothgorn’s Mantrappers are primarily an aggressive warband, with cards that reward you for chomping down on enemy fighters. Hunter’s Feast, for example, is a rare two-glory Surge objective that rewards you handsomely for taking two enemies out in the same phase, while Extra Crunchy gives you a decent chunk of glory for finishing off a heavily upgraded fighter. Finally, while there may be easier objectives, could you ever bring yourself to not pack Surprising Competence? 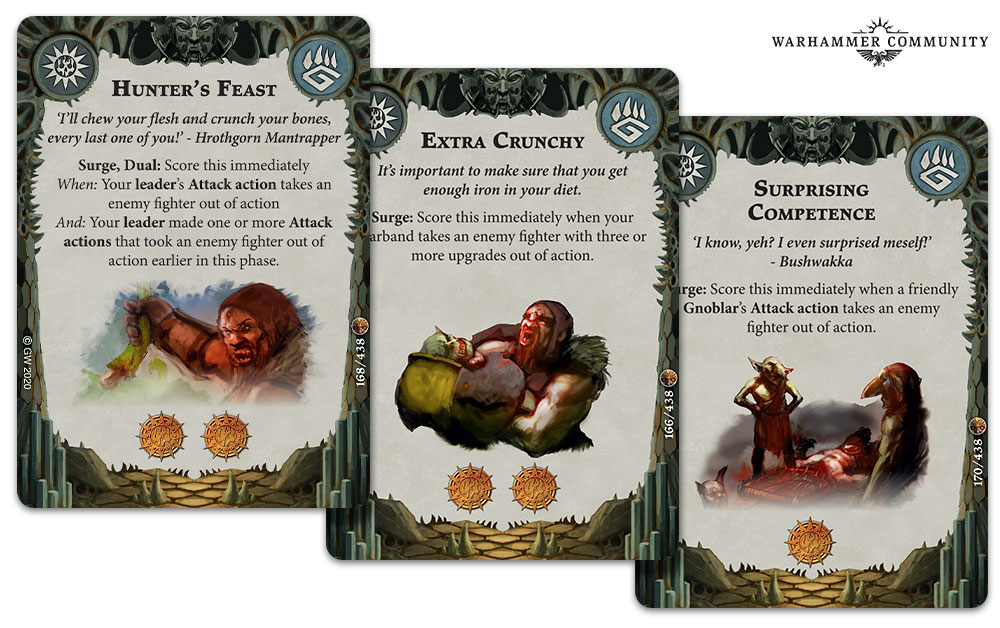 Looking to keep up with the Warhammer Underworlds meta? Check out expert gamer Aman’s guide… Aman: Hi everyone, Aman here! …

For too long have the Underworlds escaped the love of Grandfather Nurgle! Now, the time has come to take the …

4:30pm – Whisperings from Hysh Welcome back! We’ve been hearing some rumours about someone who will be coming soon to …