Ace Pilots command a huge presence in Aeronautica Imperialis. For this month’s Flight Plan, we wanted to take a moment to recognise them for their efforts and explain why you need to be using them in your games. 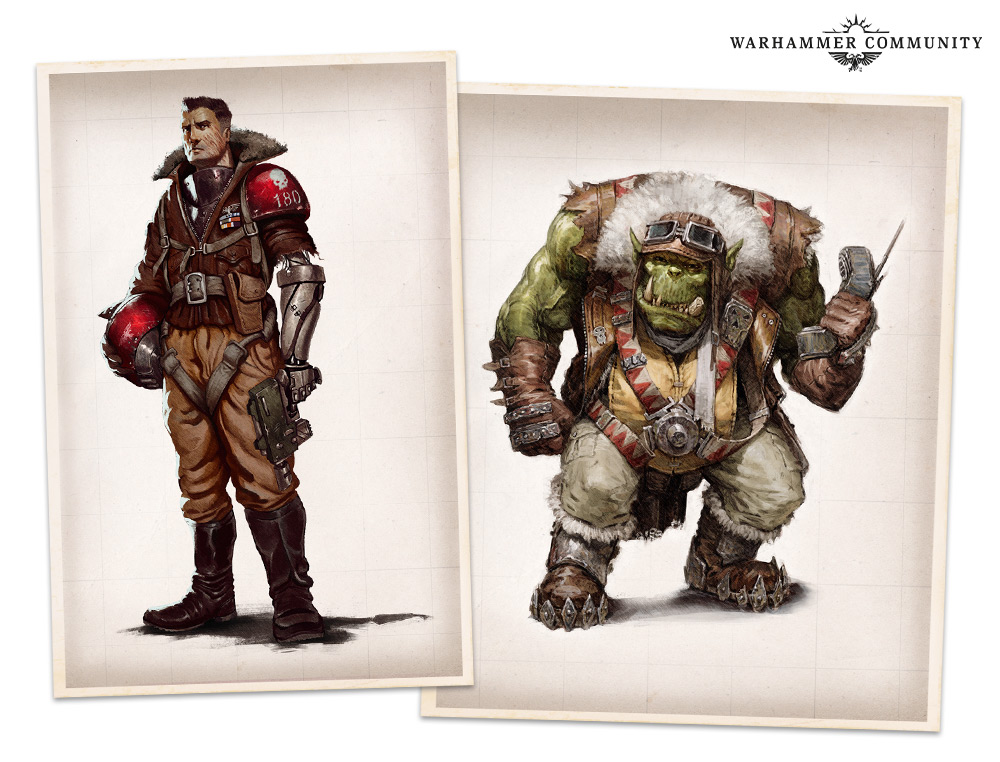 Every faction has at least two Ace Pilots to choose from, and each one comes with a unique aircraft they expertly control. While you might not be able to see them in the cockpit, they each add extra character to your force thanks to their special rules. Let’s take a look at some of these heroes of the skies. 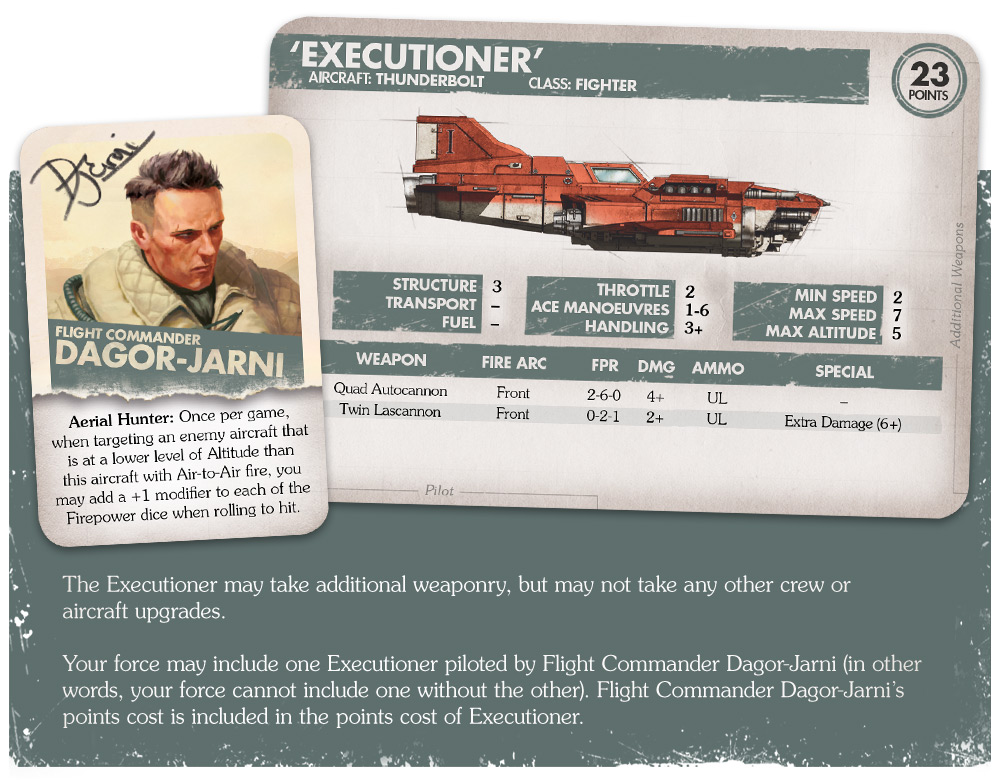 While every Fighter is built for dogfights, some are just undeniably better at it. Dagor-Jarni’s fiery red Thunderbolt is just such a craft – earning a fearsome reputation with the Orks of Rynn’s World. With a Max Speed of 7, the Executioner can keep up with the recklessly fast Ork Air Waaagh! aircraft, while retaining a serious manoeuvrability advantage.

Its Max Altitude of 5 allows the Executioner to fly higher than Ork planes as well, making it harder for them to score a good hit. Dagor-Jarni’s Aerial Hunter special rule lets him remain fully effective from one Altitude level above his quarry, erasing the -1 penalty.

Perfect for: Taking out big targets 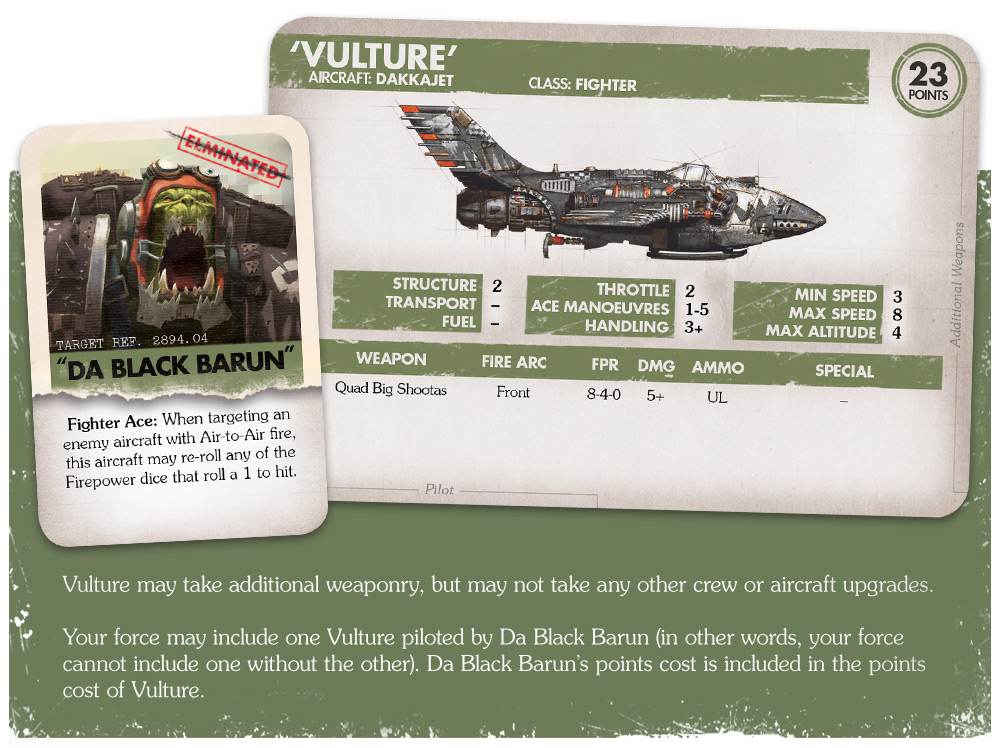 Ork aircraft, as a rule, generate loads of Firepower during the Firing phase. Now, if you want to make better use of all those dice, Da Black Barun is for you. He’s so in tune with his kustom Dakkajet, Vulture, that he can handle it better and at lower speeds than his peers – crucial for tailing a foe without overtaking it.

If you’re going hunting for a juicy target like enemy bombers, his Fighter Ace rule allows you to re-roll any 1s in your Firepower dice. Load Vulture up with two pairs of rokkits and watch your opponents become little more than flaming wreckages… 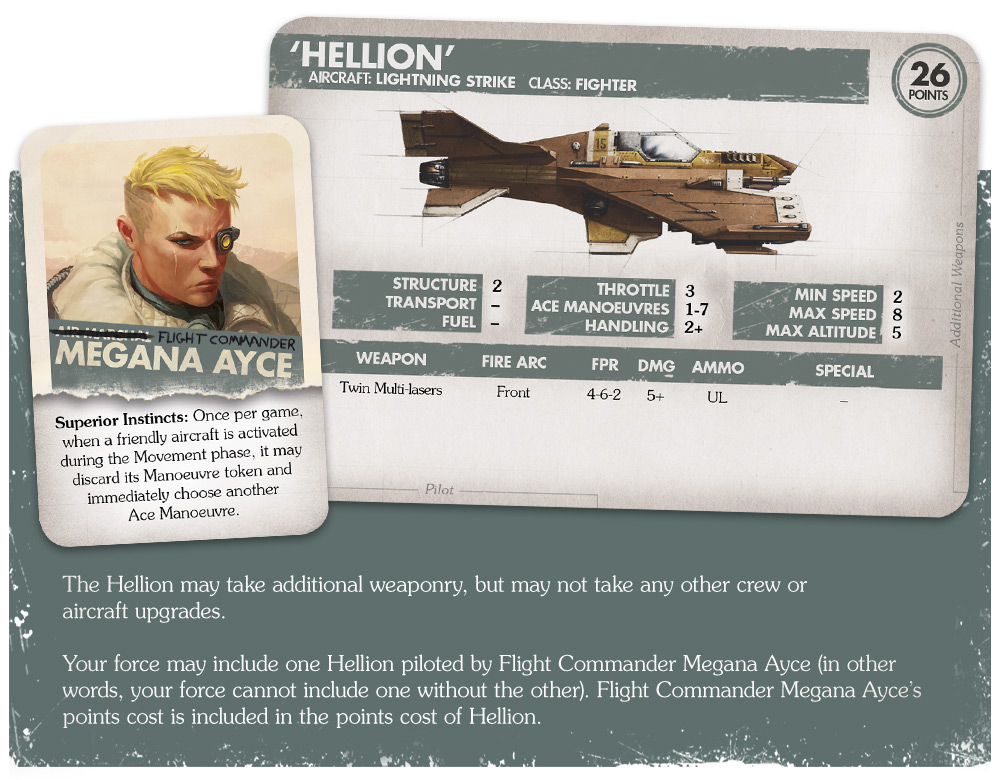 Unlike any other Ace Pilot we’ve looked at so far, Megana Ayce’s special rule applies to other friendly aircraft – in this case allowing them to swap out their Ace Manoeuvre to react to a situation. In a game where choosing the wrong moves can cost you dearly, her Superior Instincts rule can mean the difference between getting the drop on an attacker or them gaining the upper hand on you.

Enemy aircraft will quickly learn that it’s much harder to catch their targets off guard when they see Hellion flying against them.

Perfect for: Impressing the luddites 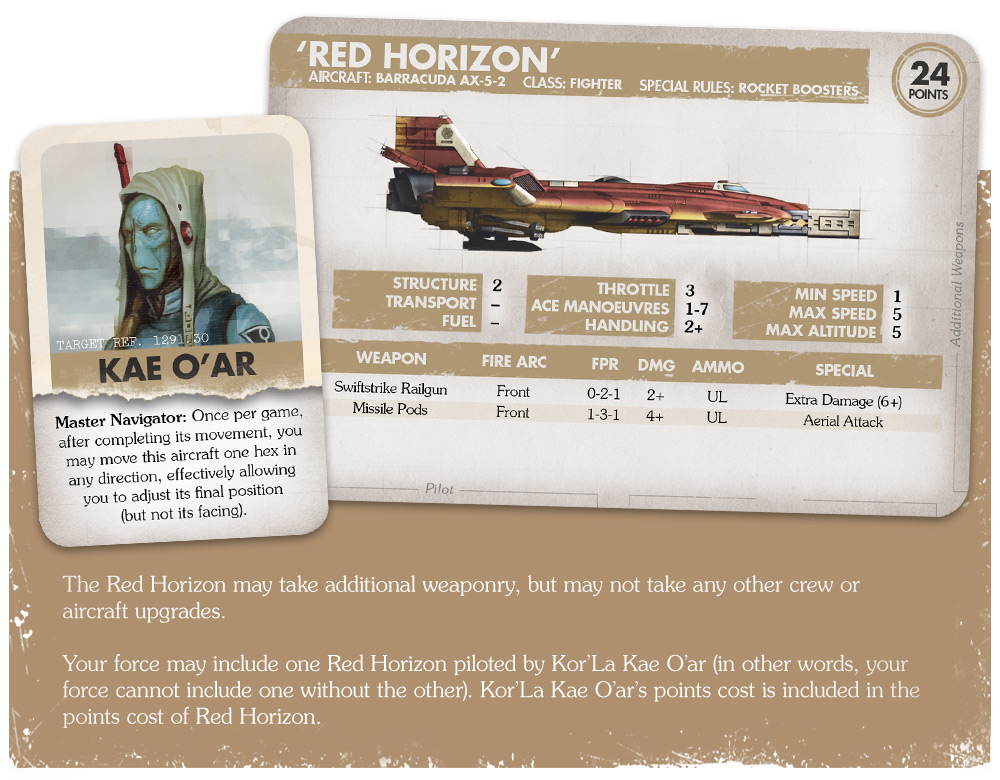 To the T’au Air Caste, other faction’s aircraft are simple, brutal things. This is even more true for Kae O’ar, when she’s flying her finely-tuned Barracuda AX-5-2, Red Horizon. She’s spent so much time in advanced simulators that flying live missions is like a game to her. She’s able to assess the vector and flight path of her opponents, pushing her advanced aircraft to the limits to counter their moves.

With a Throttle of 3, in addition to her Master Navigator rule, Kae O’ar is able to wiggle out of a tight spot, catch up to a distant target, or slide into a tailing position with astonishing ease. She’s incredibly difficult to predict, giving you a psychological advantage to boot.

For just a few extra points, you can upgrade one of your planes to an Ace Pilot to gain a unique profile with distinct properties plus a special rule that can drastically change your gameplay and keep the other player on their toes. Why wouldn’t you go for that? It also gives you the chance to paint special markings or challenge yourself to capture the signature paint schemes found in the book.

The Taros Air War and Rynn’s World Air War books include the rules for the Ace Pilots above, along with others that can turn aerial battles in your favour. If you haven’t given them a shot, try them all in your games to see how they mix things up, and join us on Facebook to share pictures of your aces with us.

We’ll be back in a month with some exciting news about the future of Aeronautica Imperialis. Until then – watch your six!

Flight Plan: Keep Your Eyes on the Skies

Read the first instalment of a new monthly article for previews and a free scenario.

And you thought Eavy Bommers were big… Prepare to have your mind blown – not to mention any ground targets.

Get a sneak peek of upcoming Imperial Navy and T’au Air Caste models for Aeronautica Imperialis, plus a free downloadable scenario!