It’s the last of our Kill Team: Elites previews today, and that means we’re looking at what the expansion has in store for the Imperium Factions – including the golden guardians of the Adeptus Custodes. If you missed our earlier previews on the xenos and Chaos Factions, be sure to give them a read too. For now, it’s on to the Emperor’s finest… 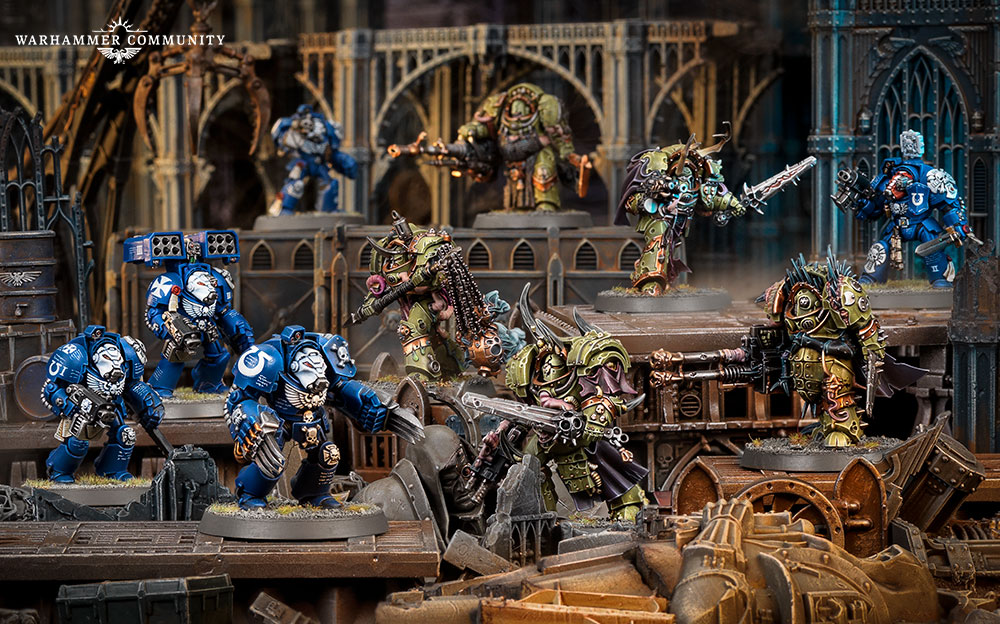 As with their traitorous kin, Adeptus Astartes kill teams are set to benefit from a range of Chapter Tactics that add a powerful narrative-driven ability. For example, the siegecraft of the Imperial Fists will ensure that their shots count even against the most well-concealed targets. 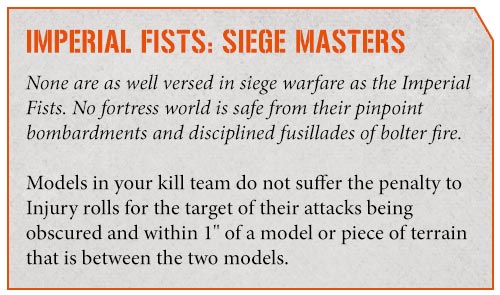 Meanwhile, the Dark Angels are renowned for their Grim Resolve, and that is reflected in the way they hold their ground with implacable determination. 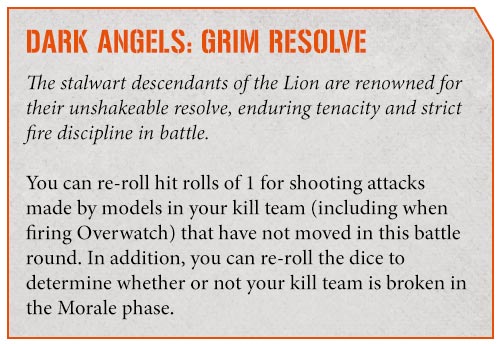 The Adeptus Astartes can expect to be reinforced with a large selection of Veteran and Vanguard fighters and Commanders. Terminators offer all-round muscle at close and long range, while Dark Angels and Space Wolves Terminators can even be equipped with bespoke wargear combinations. Meanwhile the Veterans datasheet caters for Vanguard, Sternguard and Company Veterans.

Vanguard options include Infiltrators, Eliminators and the aptly named Suppressors – check out the amazing ability of their accelerator autocannons!

Adeptus Astartes Commanders include a Phobos-armoured Captain and Librarian from the Vanguard, both of whom are equipped with camo cloaks like Scouts and are able to set up in concealed positions (see below). Alternatively, a Lieutenant in Phobos armour comes equipped with a grav-chute, so will work well alongside similarly equipped Reivers.

If you prefer your Commanders to display brawn over stealth, a Captain, Chaplain or Librarian clad in Terminator armour will cater to your needs nicely. 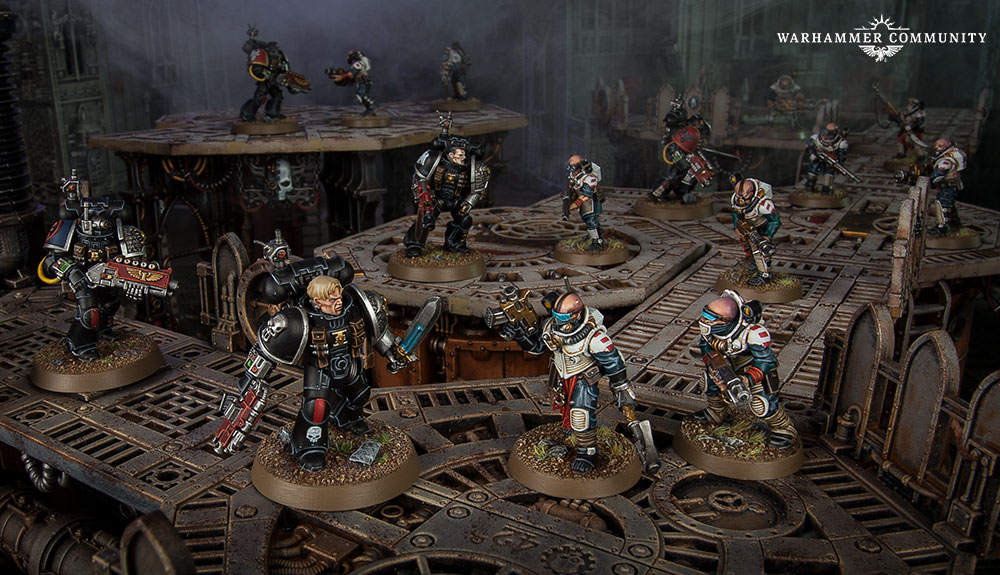 In addition to gaining access to a Terminator-armoured Captain, Chaplain or Librarian, as well as Terminators and Veterans (or more specifically, Vanguard Veterans with jump packs), Deathwatch kill teams will be able to utilise Mission Tactics, which will enable them to efficiently prioritise enemy targets. 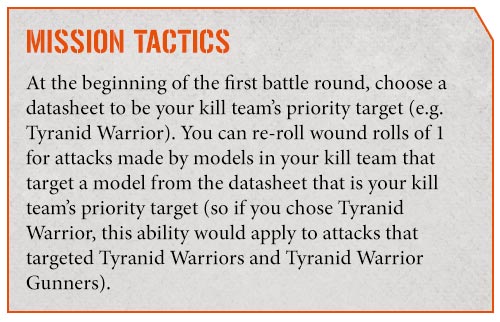 The new Grey Knights ability, Brotherhood of Psykers (see below), matches that of the Thousand Sons ensuring that they will have psychic dominance over all but the Sons of Magnus. Grey Knights will also be able to field Terminators and even the mighty 3-Wound Paladins in addition to a Terminator-armoured Librarian or Brother-Captain as a Commander. 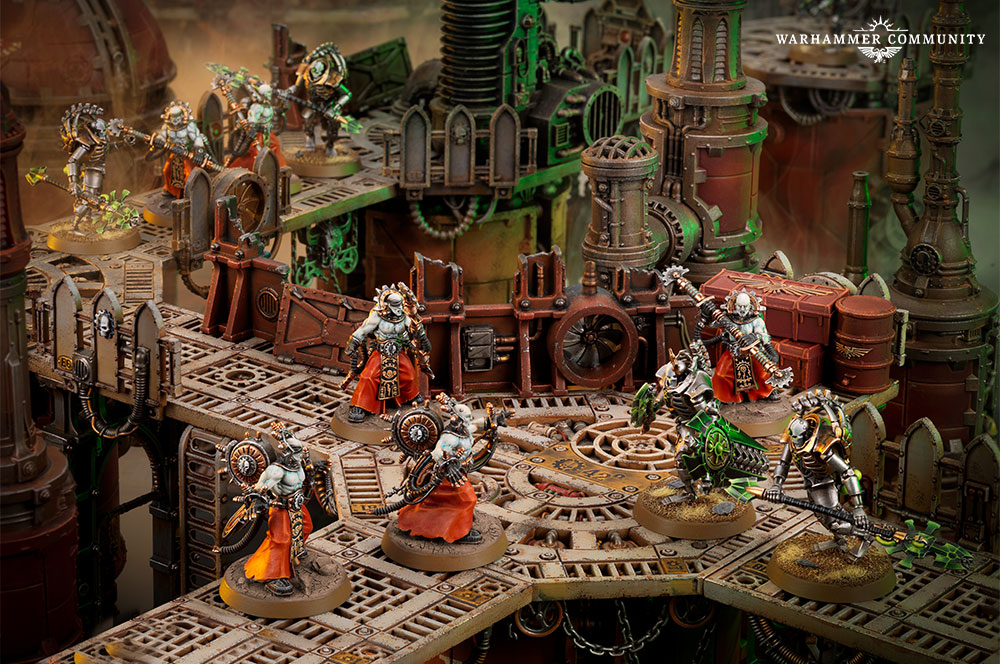 Kill teams that serve the Adeptus Mechanicus will soon do so aided by the benefits of their Forge World Dogma. Operatives from Mars receive the greatest favour of the Machine God when they chant his praise. 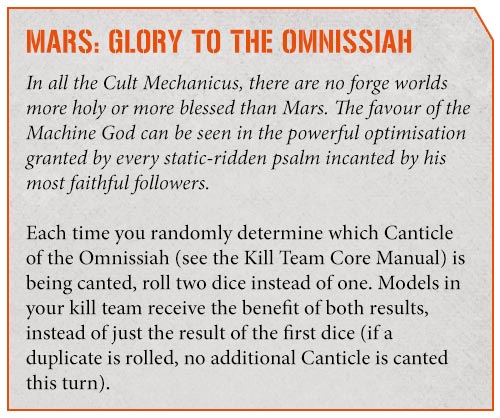 The agents of Lucius, meanwhile, are shielded by their faith and the solar-blessed ores of their Forge World. 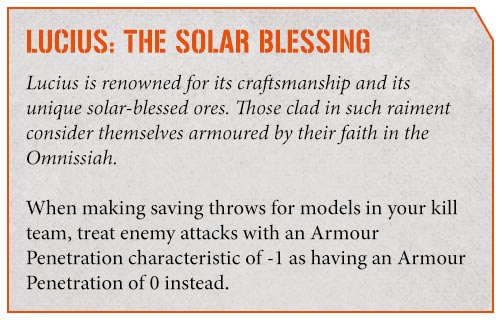 The Tech-Priest Manipulus, the rules for which were only previously available as part of the Theta-7 Acquisitus kill team set, now joins his fellow servants of the Machine God as a more widely available Commander, along with Corpuscarii and Fulgurite Electro-Priests. The Siphoned Vigour ability of the Fulgurites will make them fantastic Combat or Zealot specialist options, where they can more easily reap its benefits. 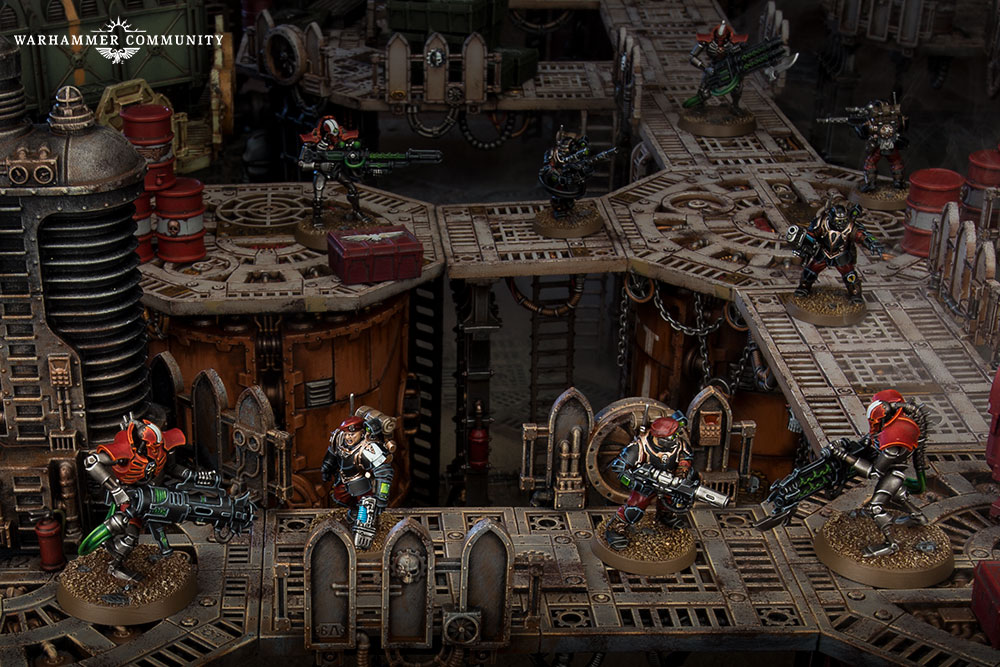 The brave soldiers of the Astra Militarum will gain the Regimental Doctrine of their homeworld. The sons and daughters of Cadia (the planet broke before the Guard did!) are natural-born soldiers, and better trained than any others. 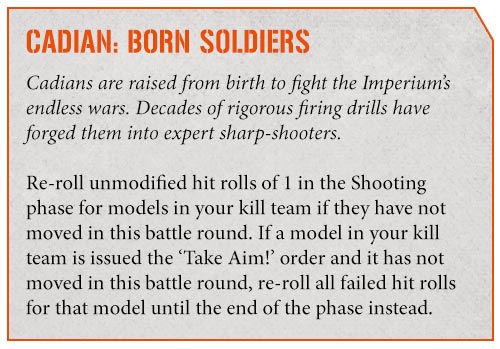 The hardy jungle troopers of Catachan, meanwhile, benefit from their great natural strength and courage. 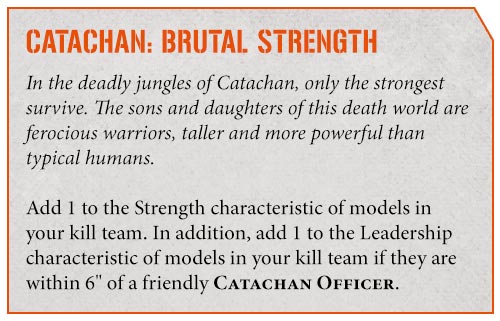 The Astra Militarum will soon be able to add the might of Ogryn and Bullgryn auxiliaries to their kill teams, adding some serious muscle and staying power – and even heavy armour – to their large numbers. After all, Bullgryns equipped with slabshields are looking at a 2+ Save!

Oh, and did we mention SLY MARBO?! We won’t ruin the surprise about how good he is (though, suffice it to say, he’s a Level 4 in the Legendary Hunter specialism), but we will show you a hint at how much of a game-changer he can be… 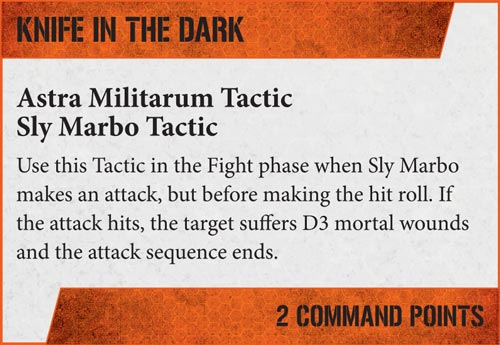 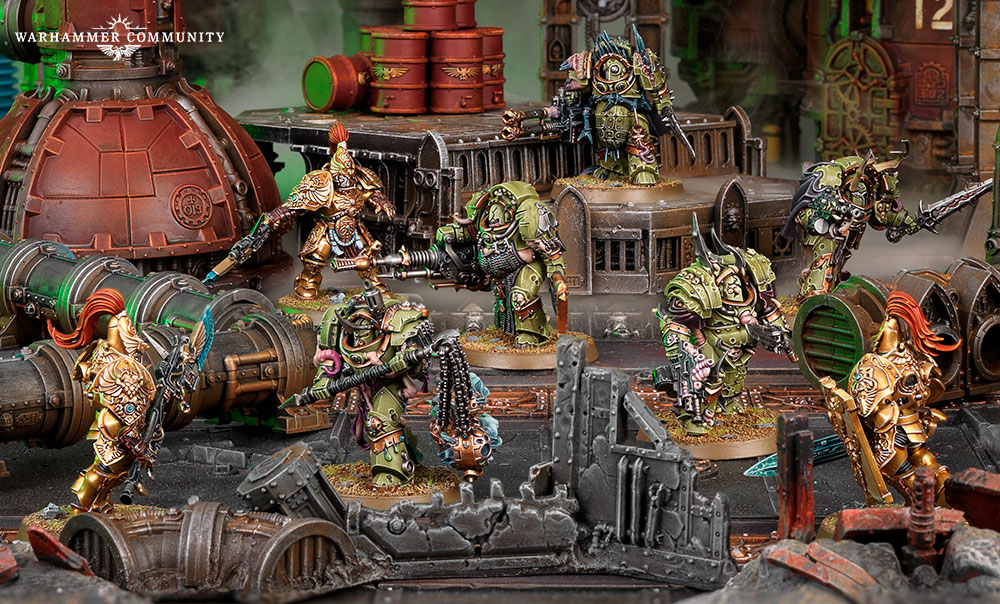 The one you’ve been waiting for – the auric demigods that are the Adeptus Custodes are ready to enter Kill Team! First up, their kill teams will all benefit from an improved invulnerable save.

They also have a set of six Tactics that you can make use of. For example, if your opponent reckons they can get around your universal 2+ Save characteristics and enhanced invulnerable saves with psychic powers, you can teach them that the Adeptus Custodes are not so easily undone… 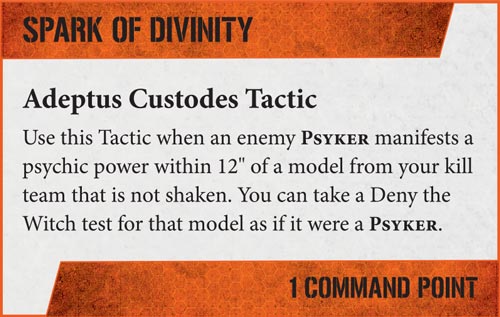 You’ll have the choice of two fighters in the form of the Custodian Guard and Allarus Custodian datasheets, the profiles for which will rival all but the most powerful enemy Commanders! For their own Commander, the Adeptus Custodes can call upon a Shield-Captain, who is powerful enough to defeat any adversary with contemptuous ease. Even when wounded almost unto death, the lions of the Emperor are all but unstoppable.

With the arrival of the Adeptus Custodes, Sly Marbo and more besides, the Imperium has revealed some of its mightiest assets in Kill Team: Elites. You will soon be able to bring the glory of the Emperor to xenos and heretic alike! You won’t even have long to wait – this awesome new expansion up for pre-order from Saturday, so be sure you secure your copy then.

Arise, heirs of Sigismund! Draw your swords and give praise to the God-Emperor, for today you march to victory! Book …

Today, the Warhammer World gaming hall was the site of the largest game of Apocalypse ever played. The walls resounded …

The Frontline of Fear – Building a Phobos Army

The Space Marines Infiltrators and Incursors kit is available to pre-order from tomorrow, meaning you’ll be able to create an …