Abaddon’s Black Legion May Be Bad, But in This Army Showcase They Look So Good

Warhammer+ has arrived, and it’s positively brimming with hobby goodness. While a subscription already offers you lots of features to enjoy, there’s more to come every Wednesday, starting with the inaugural episode of Loremasters, coming soon.

This new series will bring you deep-dives into the 41st Millennium and the Mortal Realms, and the first episode delves into the extensive history of Abaddon the Despoiler. What better way to get in the mood for the upcoming show than with this incredible Black Legion army showcase, courtesy of hobbyist extraordinaire Alex Booth. 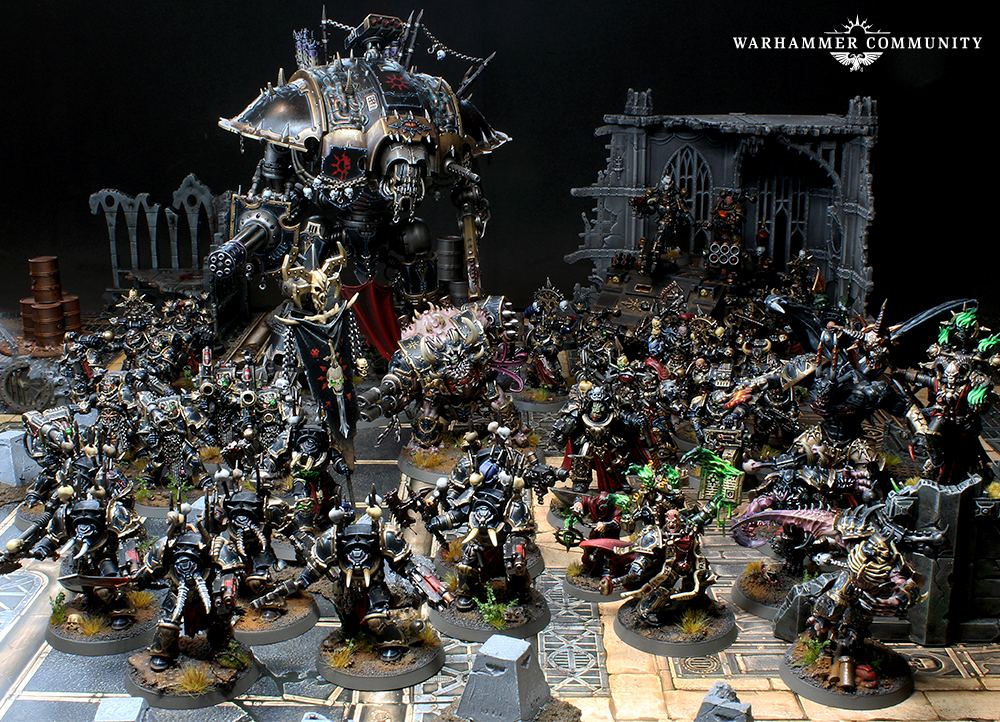 Alex: I was introduced to Warhammer way back in 1995 when I painted an Ultramarine in the Nottingham store. If I remember rightly, my first encounter with Abaddon the Despoiler and the Black Legion was part of a store campaign, probably reenacting one of Abaddon’s many Black Crusades.

Warhammer pulled me back properly in 2018 after the Shadowspear box was unveiled. The Daemonkin proved to be the irresistible lure that began my descent into Chaos. The models looked incredible, and I was especially enamoured with the gold trim on the Black Legion. When ’Eavy Metal painter Max Faleij shared the painting guide, I just had to try it – so I jumped in feet first with the Master of Possession. 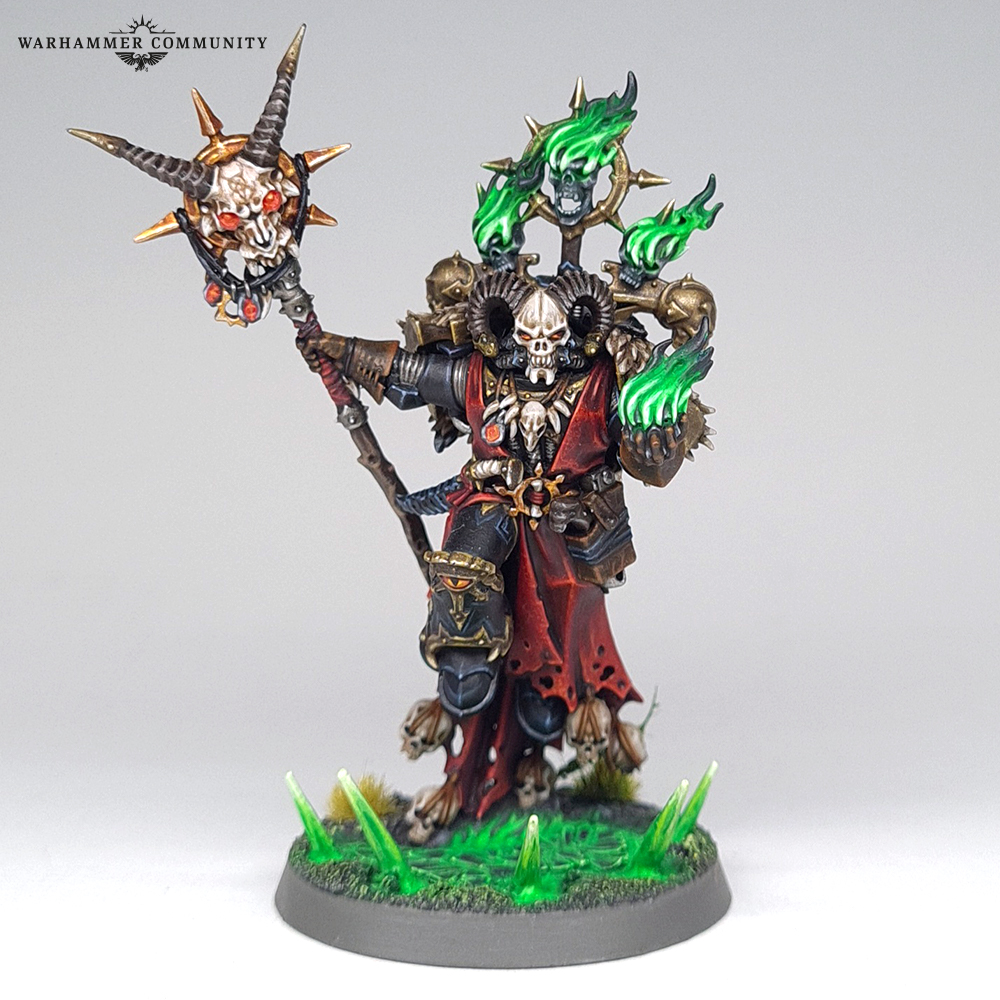 I went about reading anything and everything I could find about the Black Legion. The idea of drawing on different Chaos Gods and Traitor Legion backgrounds is really interesting to me. Being the bad guys is loads more fun too.* 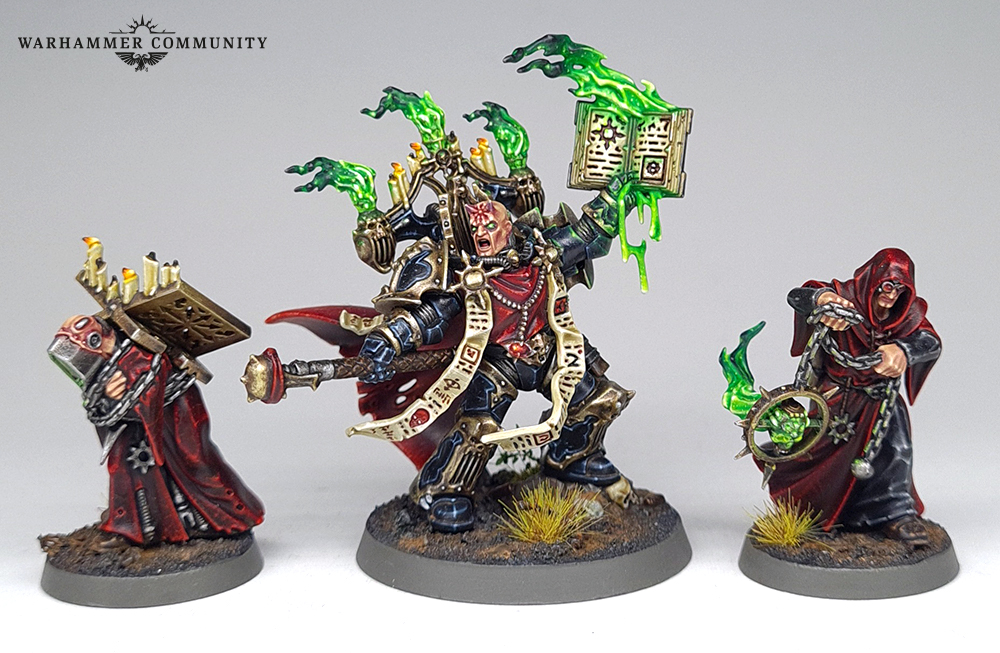 My painting improved along the way, and I made tweaks like adding glowing red eye-lenses and weathered bases as my confidence grew.

I’ve slowly worked my way through many different units. I did get a bit distracted at points – like when I painted a Chaos Knight in Black Legion colours – but with the completion of my eighth Chaos Terminator back in April, I broke the 2,000-point barrier. 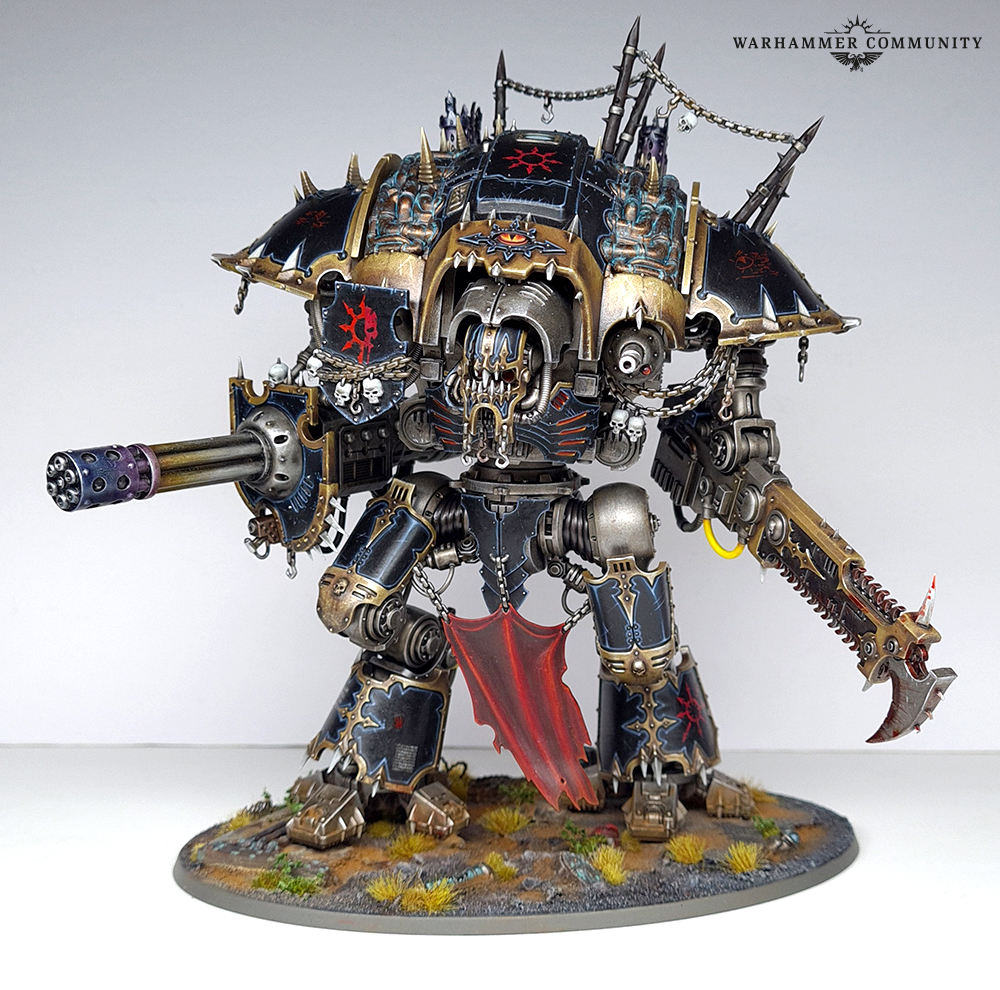 I’ll tell anyone who listens that the Terminator is the iconic Warhammer 40,000 model, and there’s no better Terminator-armoured Space Marine than Abaddon. The Warmaster made the ideal treat to celebrate my achievement. 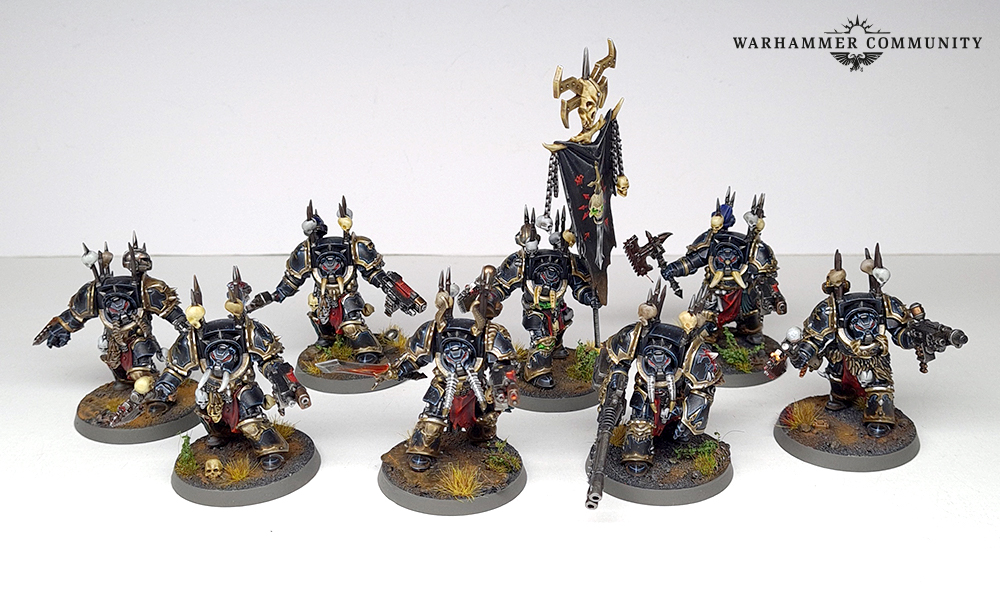 I was intimidated at first. Abaddon would be the obvious centrepiece of my army, so he had to look outstanding. But as I worked through the model, I thoroughly enjoyed each step.

I diverged a little from the awesome ’Eavy Metal scheme, preferring to lavish a bit more gold on Drach’nyen. I also changed the sword design to match the bright green daemonic spot colour I’d used across the army, established way back with the Master of Possession. 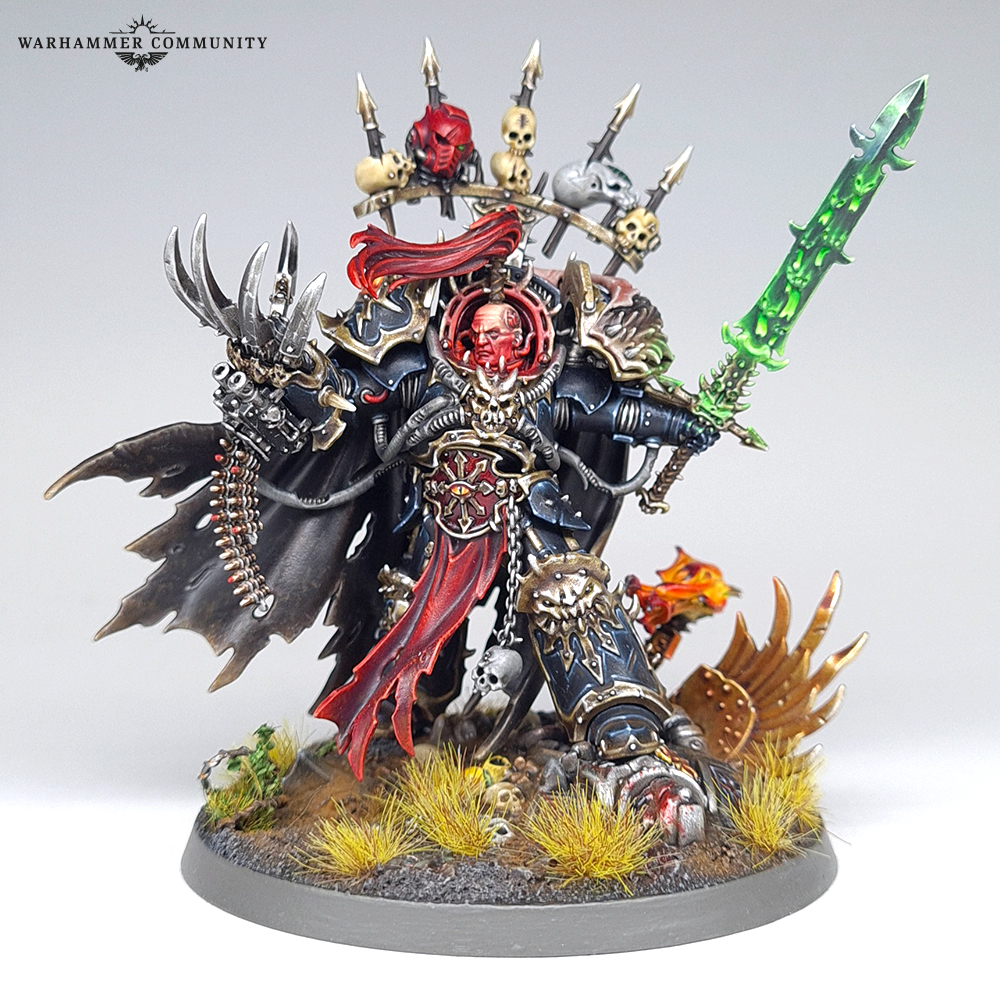 I stuck with red cloth tabards and decided to go for the red glow you often see on artwork featuring Abaddon by using an object source lighting technique,** which took two attempts.

Finally, I made the dead Space Marine on the base a Silver Skull as a neutral colour choice – it just so happens to be a friend’s army of choice too.*** 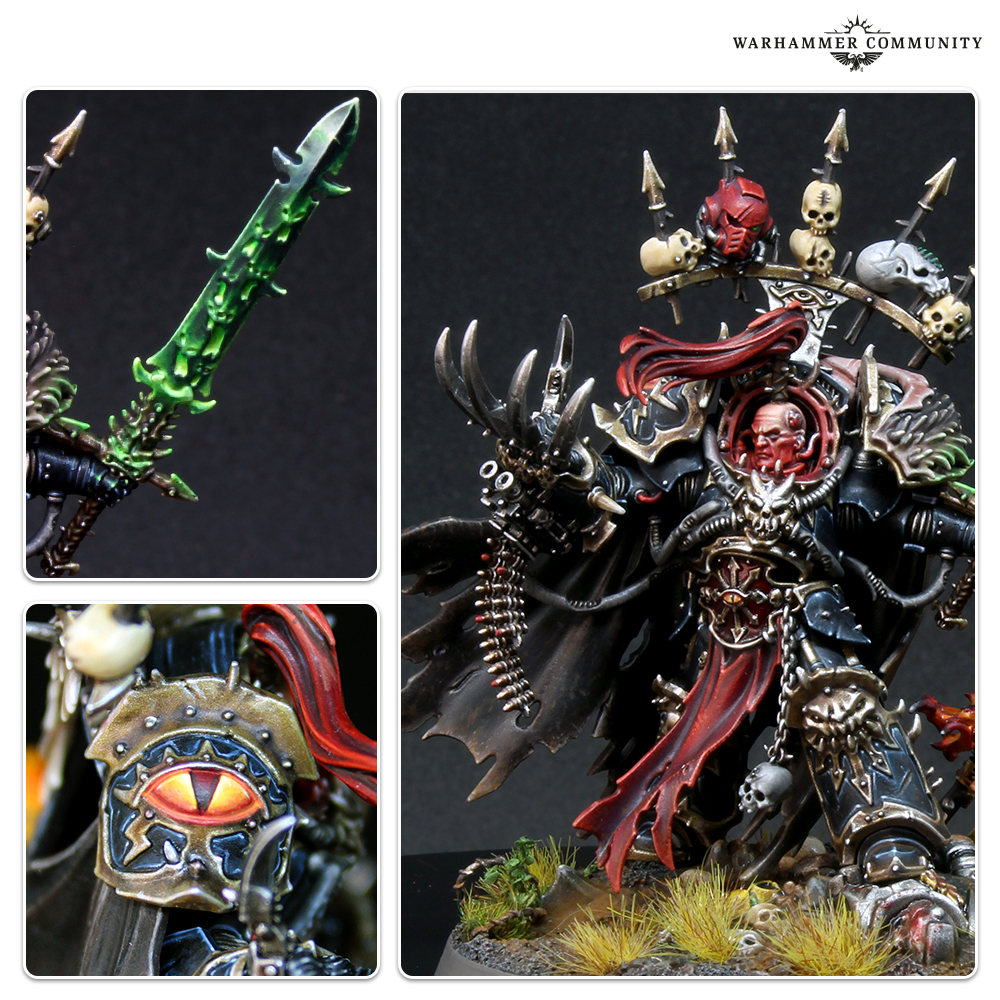 I’m beginning to show more of the influences of the Chaos Gods, demonstrating Abaddon’s status as the undisputed champion of all the Ruinous Powers. My Havocs and Helbrute both have some light Slaanesh iconography, and I’ve just built five Khornate Terminators using some parts from Warhammer Age of Sigmar kits too. 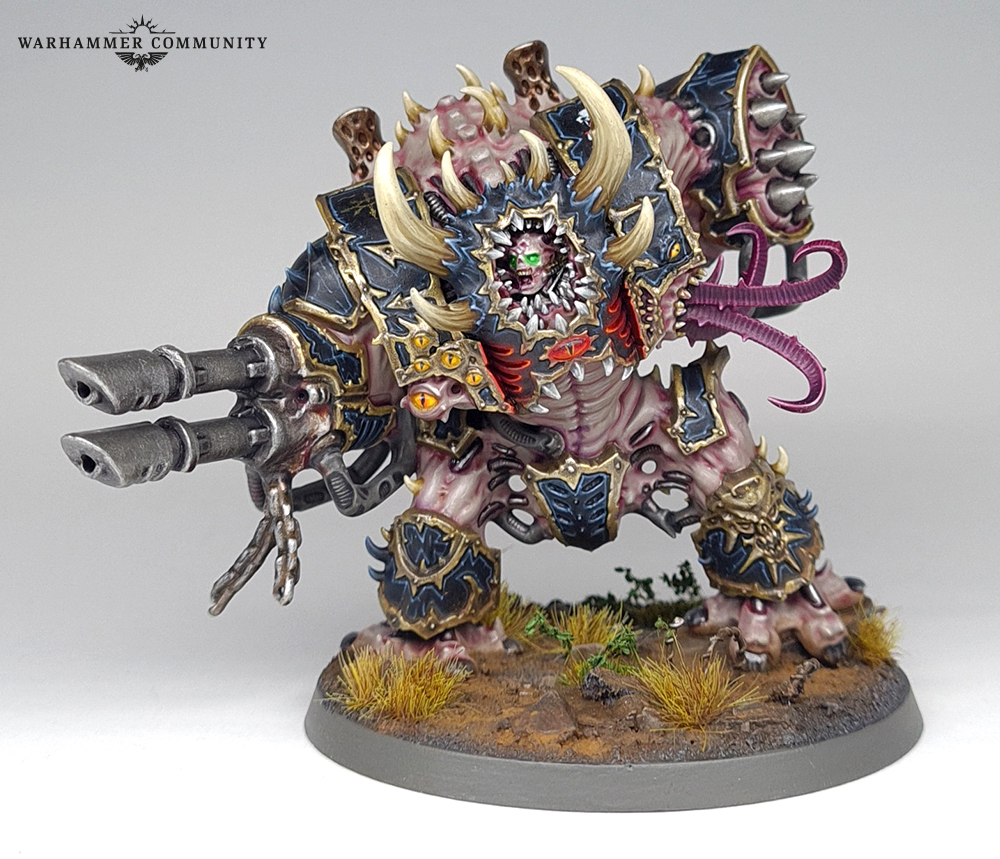 I’ve got some Nurgle bits as well, though I’m currently focussing on Tzeentch in the shape of some Chaos Spawn, Rubric Marines, and Scarab Occult Terminators.

I’m also working on a conversion of Iskandar Khayon from Aaron Dembski Bowden’s novels The Talon of Horus and Black Legion, as well as a particularly red, cyclopean Daemon Primarch. I’ve even got an uneasy alliance with Be’lakor lined up. All “in black and gold reborn” – ready for Abaddon’s next crusade, of course. 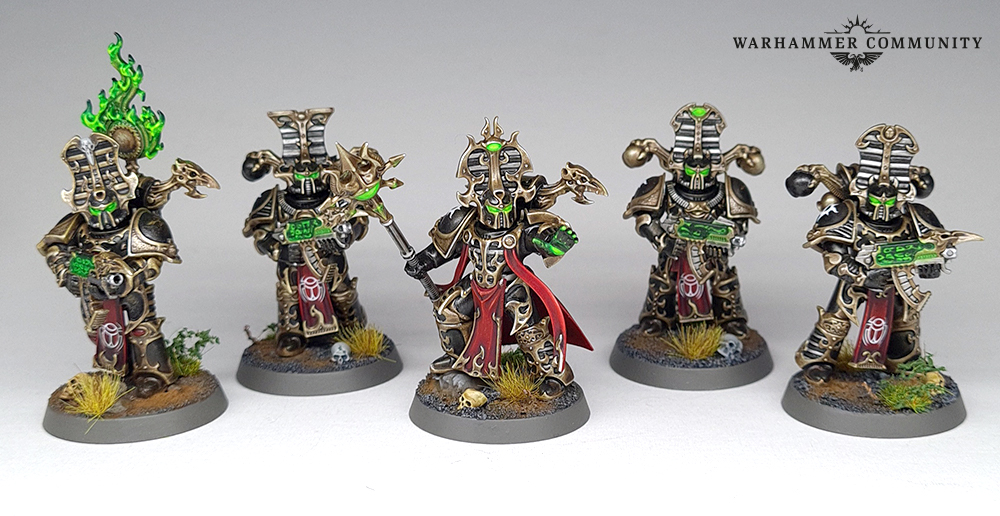 All of the Chaos influences help keep things fresh and exciting as I expand my Black Legion collection ever onwards.

Thanks, Alex. If you’re looking to join the ranks of Abaddon’s Black Legion, you can jump in at the same place as Alex did – with the Daemonkin in the Start Collecting! Chaos Space Marines set. Make sure you pick up the ‘Big Bad’, Abaddon the Despoiler, to lead your force too.

Speaking of whom, you can find out more about Abaddon when Loremasters launches on Warhammer+. If you subscribe before the end of August, you can even bag yourself a virtual gift voucher and get stuck into all of the other features Warhammer+ has to offer.

* To be fair, ‘bad guys’ is a relative term in the grim darkness of the far future.

** Object source lighting, or OSL, is where a painter uses a colour on the model to create an illusion of a light source within their composition.

*** That friend is none other than Citadel Miniatures designer and expert painter Darren Latham. Fun fact: Darren is also an accomplished model photographer and took the pictures for this article.

See what the new Death Guard codex has in store for you before pre-orders open.

Be’lakor’s Back, and the Galaxy’s Mightiest Warriors Should Be Very Afraid

See how the First Daemon Prince compares to some of the biggest players in the 41st Millennium.

Metawatch – Chaos Marches to Victory in the Latest Grand Tournament

Chaos claims victory in Australia. Is this a sign of things to come?