Outlast Any Enemy With the Soulblight Gravelords in the New Edition 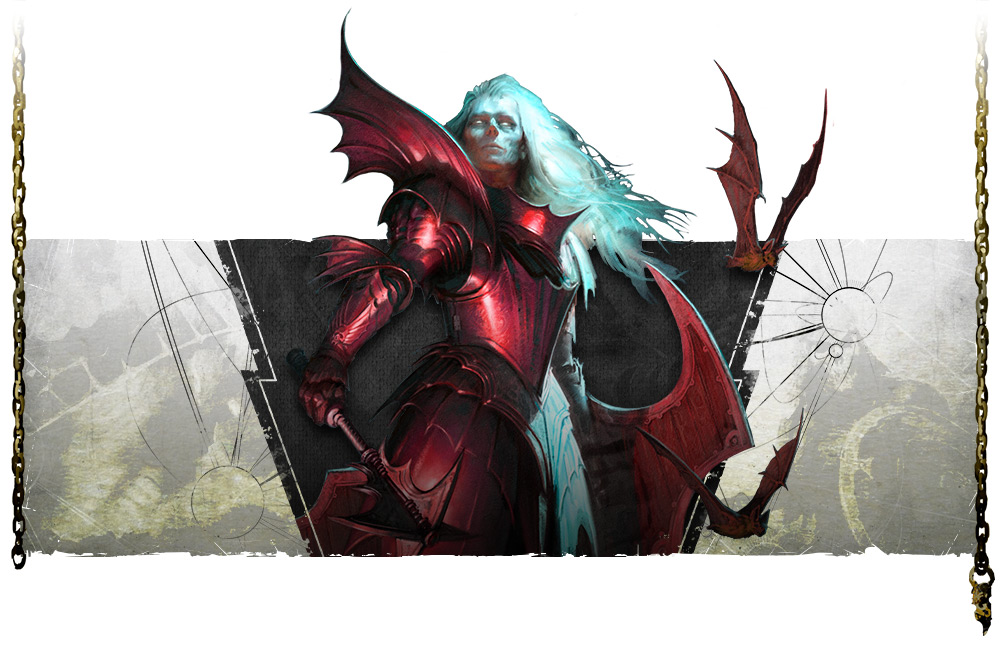 If your idea of fine dining is a chalice of blood fresh from the jugular, you’re in luck. That’s because we’re about to take a look at the dread Soulblight Gravelords and how they’re looking in the new edition of Warhammer Age of Sigmar. 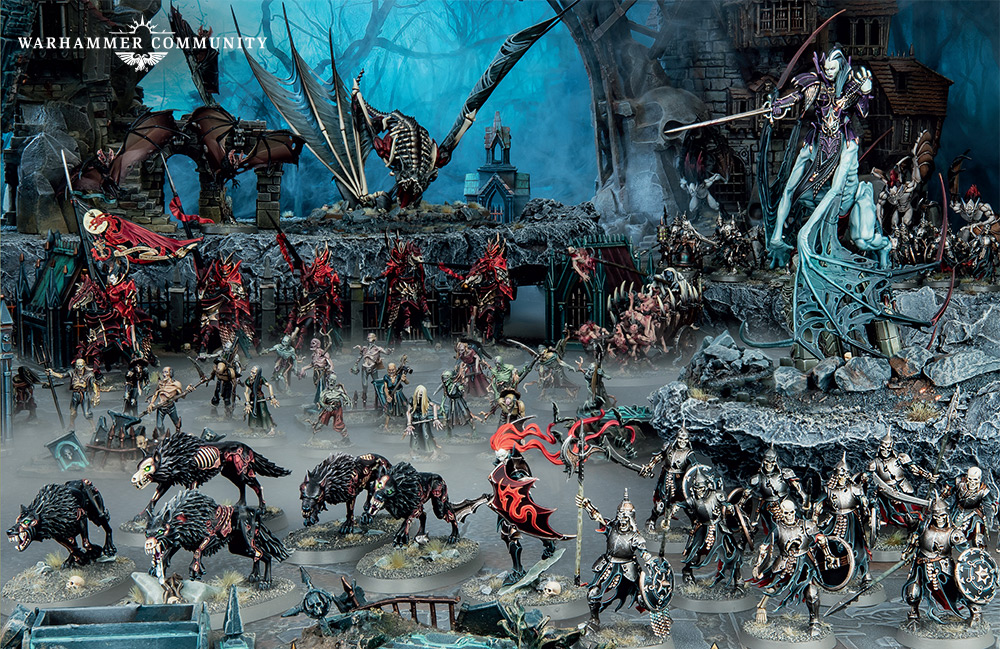 So far, we’ve covered the Stormcast Eternals, Orruk Warclans, and Slaves to Darkness, but today, it’s time to cover our first Death faction. In the days and weeks to come, we’ll be bringing you more of these overviews, designed to be informative for both newer and experienced players alike. On that note, let’s learn a little bit more about these deathless servants of Nagash.

Who Are the Soulblight Gravelords?

The origins of the Soulblight Vampires can be traced back to the World-That-Was. It was Neferata who, in her jealousy of the immortality of the Great Necromancer Nagash, stole his infernal grimoires seeking to replicate the elixir he had created. Though she was ultimately successful, she inadvertently became the first of the Vampires in the process. 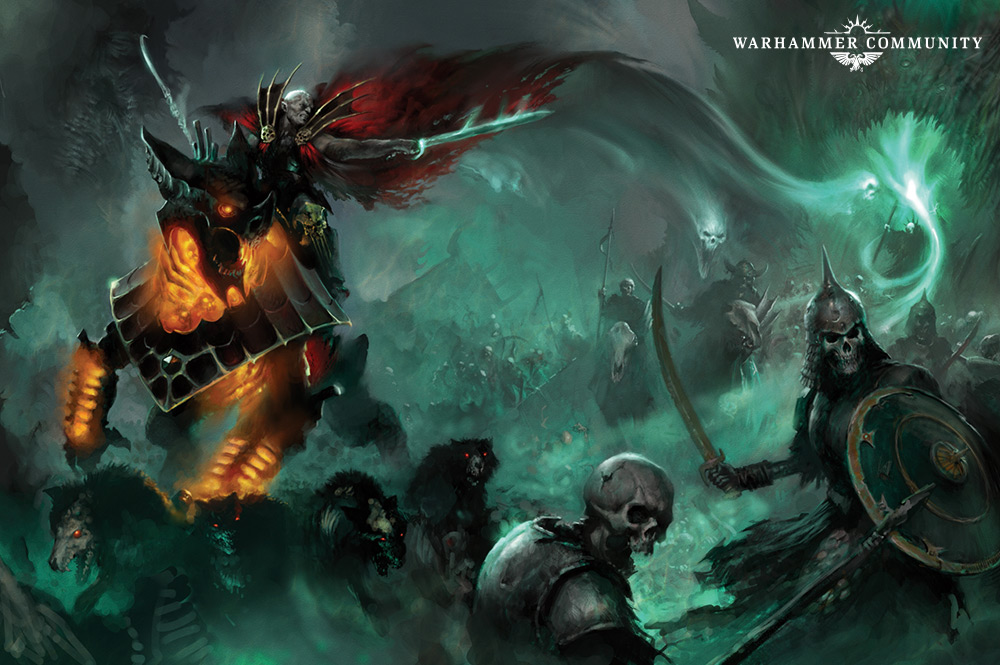 In the Age of Sigmar, Soulblight Vampires serve Nagash as some of his foremost generals, a few among them even ruling vast swathes of Shyish as his Mortarchs. They lead vast hordes of skeletal warriors and freshly raised walking corpses into battle. The advance of the Soulblight Gravelords is heralded by the howls of Dire Wolves, even as the flapping wings of Fell Bats blot out the light – a sure sign that death has come for those who would stand against Nagash’s will. 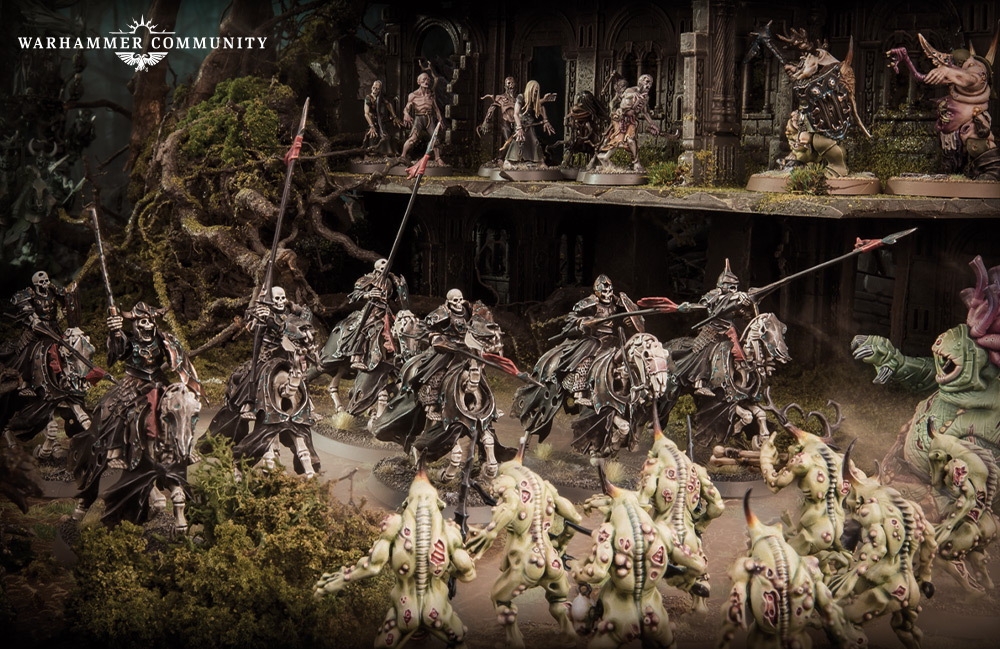 On the battlefield, Soulblight Gravelord armies often comprise large infantry units that are incredibly tough to destroy due to their refusal to stay dead, as your Vampires and Necromancers replenish lost troops using Necromantic wizardry.* Wight infantry and cavalry in the form of Grave Guard and Black Knights offer the army durable, hard-hitting elite options, while Dire Wolves and Fell Bats surge ahead of the main army to pick off vulnerable or isolated units. The vampires themselves – including the deadly Blood Knights – are among the game’s most formidable units, and are very much the (unbeating) heart of the army.

Now that you know a bit more about the Soulblight Gravelords, we’ll hand you over to Warhammer Age of Sigmar playtester and Nagash’s Mortarch of Tournaments, Steve Curtis, to tell us more about how they play in the new edition.

Steve: The Soulblight Gravelords play using a mix of powerful lords and shambling hordes. Armies can lean into massed ranks of Deadwalker Zombies and Deathrattle Skeletons, elite bands of potent Blood Knights, or lots of Monsters.** Whatever your preferred force, the premise is similar – your Heroes will be able to summon back fallen warriors mid-battle, and fully destroyed Summonable units can be brought back into play via gravesites.

The Unquiet Dead ability allows you to place four gravesite markers before the game starts. During the game, these allow nearby units a chance to negate wounds, let you deploy summonable reinforcements, and allow you to bring back units using the Endless Legions ability at the end of your Battleshock phase. You can afford to throw units at the enemy, slowing down their advance and merrily bringing them back to do the same again. This can be key to winning objective-based games in matched play, as you can redeploy the units to wherever you have a gravesite marker. 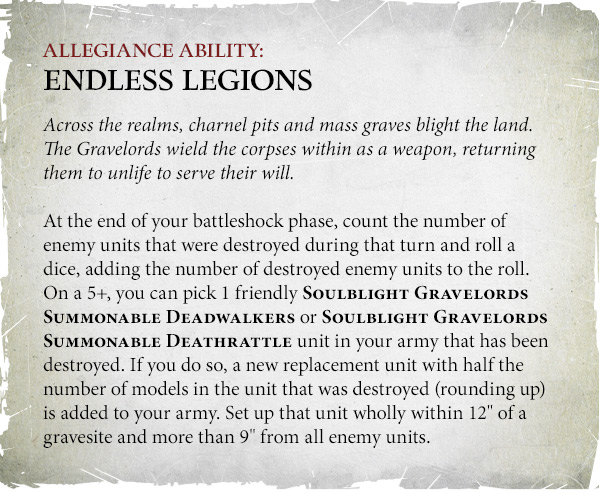 The Cursed Bloodlines are the Soulblight Gravelords sub-factions. My personal favourite, and the one to watch, is the Legion of Night. You get to add 1 to your save rolls for all Deadwalker and Deathrattle in the first battle round, and have the option of deploying half your units in reserve. This gives you immense tactical versatility, and can put your opponent on the back foot from the off. It’s a great way to prepare for taking the second turn – which also gives you lovely extra command points to use. 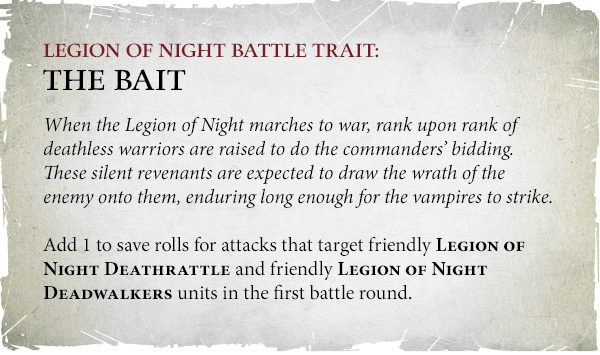 Being dead already at the start of a battle clearly has its advantages – it’s hard to make something even deader, after all. And when you can replenish your numbers with your opponent’s freshly slain warriors, even better! But which Soulblight Gravelord units are best served by the updated rules in Warhammer Age of Sigmar’s new edition? Here are Steve’s top picks. 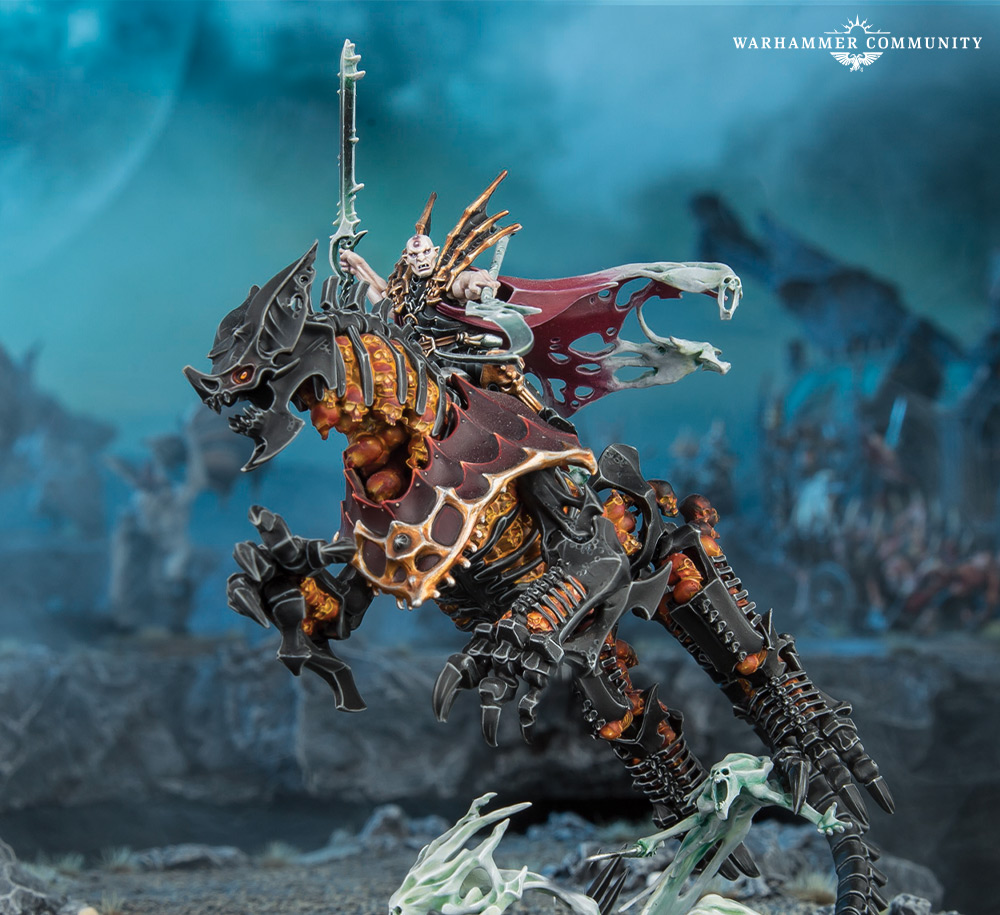 Steve: The Mortarch of Night can cast multiple spells, and a combination of the Heroic Recovery ability with The Hunger shared by all Vampires lets him heal up to 2D3 Wounds a turn, so he can stay alive and keep disrupting the enemy. If the enemy gets too close, he can disappear into the shadows using the Mortarch of Night ability to protect himself, then make the most of the Monster keyword by using Roar to stop enemies using command abilities in the following combat phase. 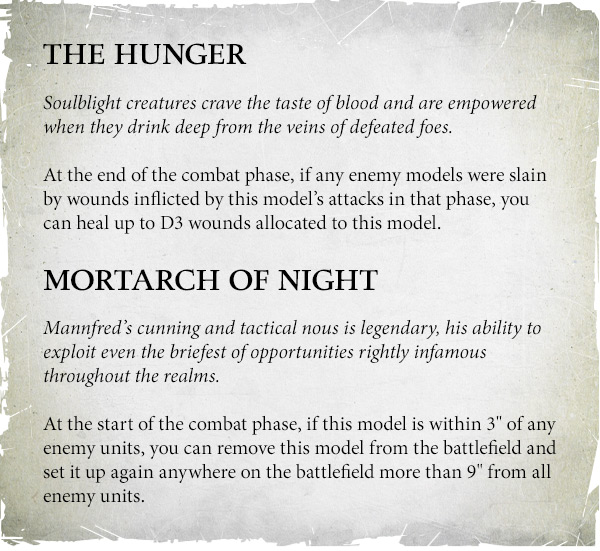 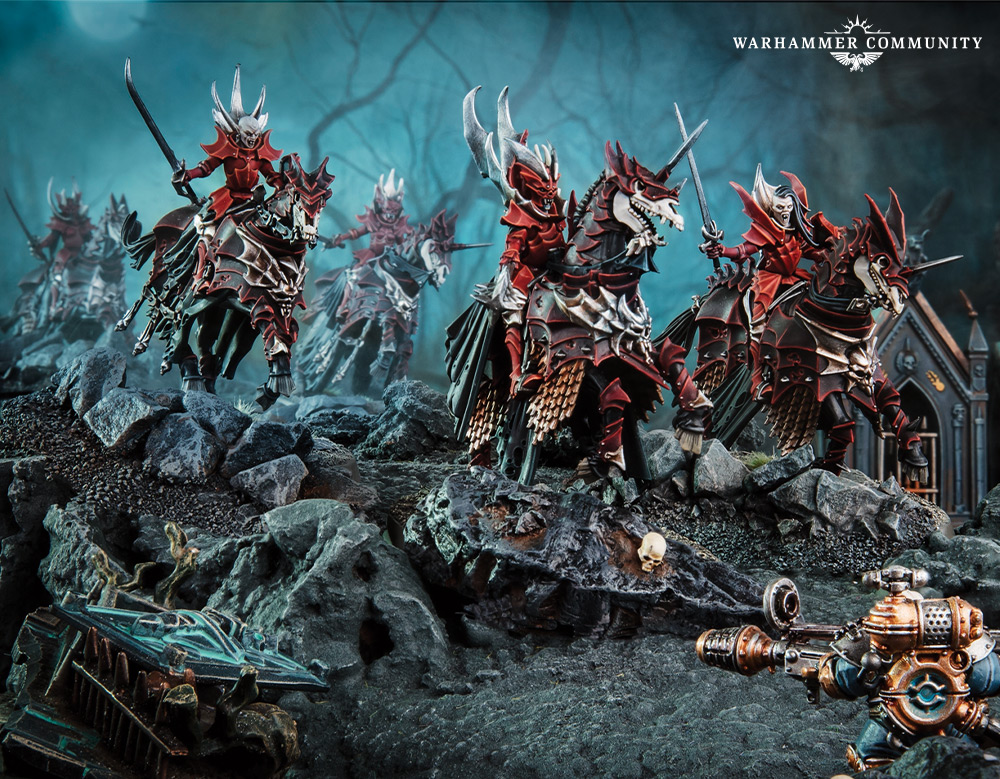 Steve: Blood Knights benefit from a couple of standout abilities. Firstly, their 3+ Save, coupled with the All-out Defence command ability, means they’re going to stick around.*** Riders of Ruin lets them make a normal move even when enemies are within 3”, trample straight over them (inflicting mortal wounds in the process), then charge straight back into the unit with deadly lances for masses of damage. 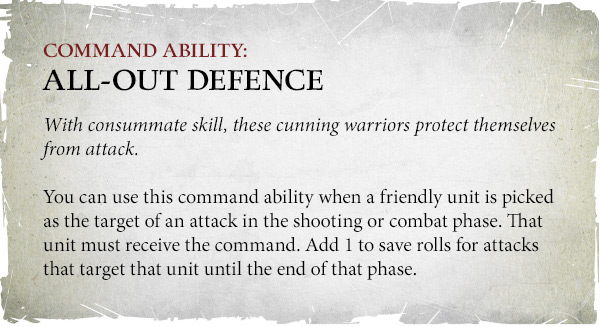 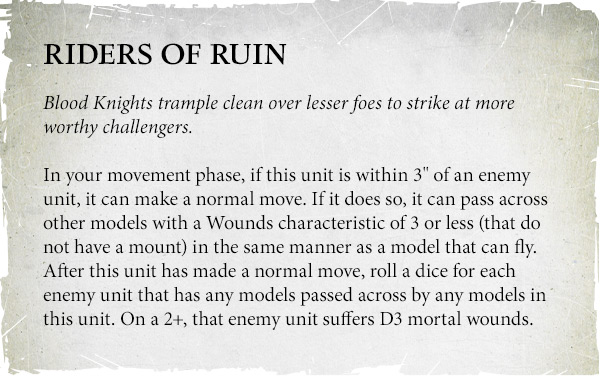 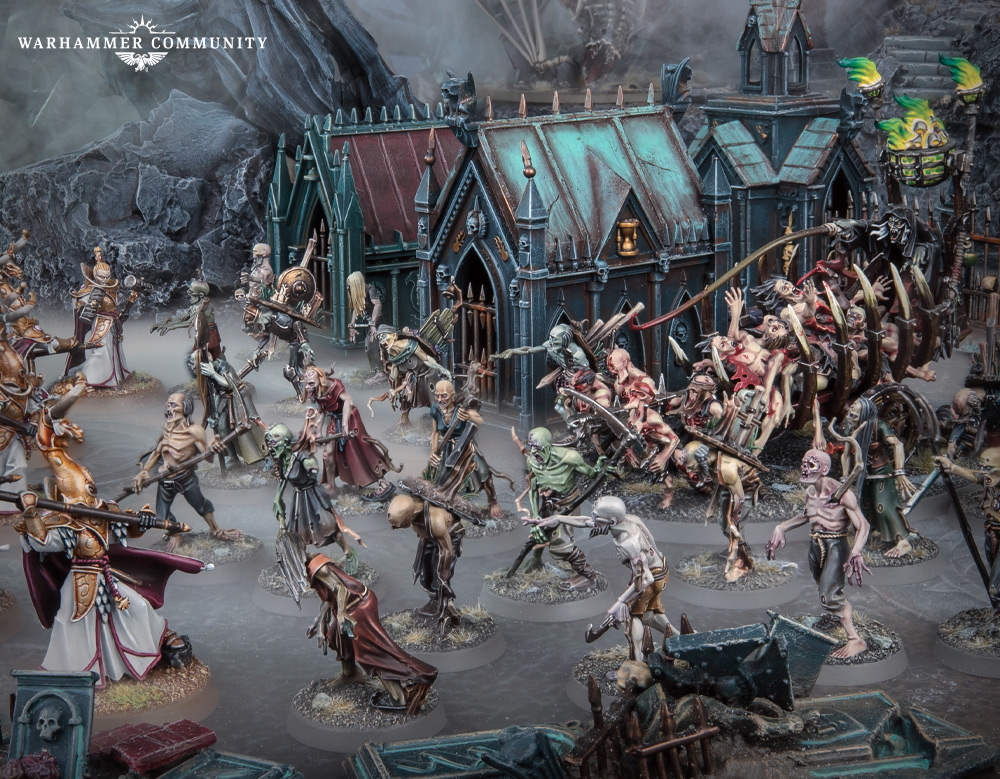 Steve: Big units of the shambling dead will ruin any opponent’s day – they’re the ultimate speedbump. Not only do they take ages to chew through, but they can come back from gravesites, and their The Newly Dead and your army’s Endless Legions let you bring the enemy dead back to fight on your side as well. The Deadwalker keyword synergises with lots of Heroes and sub-faction abilities – use a core of Necromancers, Corpse Carts, and Deadwalker Zombies to slow down the enemy advance and turn the game in your favour. 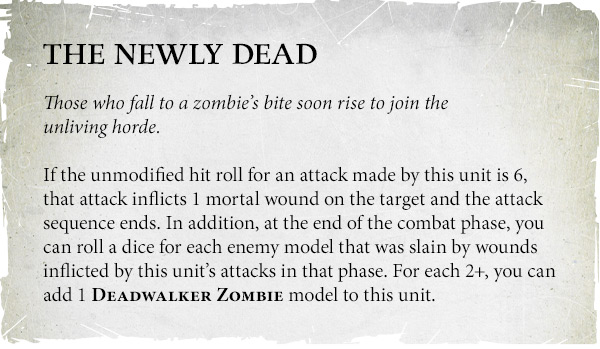 Thanks for your thoughts on the Soulblight Gravelords, Steve. Join us again tomorrow, when we’ll be looking at what the Hedonites of Slaanesh will be looking to take advantage of in the new edition. For now, if you’re looking to kickstart or reinforce your collection of Soulblight Gravelords, grab yourself their Start Collecting! set, which is full to the brim with elite units, and an undead king to lead them.

* See how your Wizards can cause even more magical mayhem in the new edition with our look at how spells are changing.

** Don’t forget that with their ability to go on Monstrous Rampages, Monsters are going to be even deadlier in the new edition of Warhammer Age of Sigmar.

*** See why you’re going to have LOTS more command points to spend on this and the other new command abilities.

Take a look at their rules to see why they’re indispensable for Soulblight Gravelords.

Forget Mannfred, Here Are 5 Reasons to Serve Queen Neferata Instead

Discover what the Legion of Blood from the upcoming Soulblight Gravelords has to offer.

All of the Vampiric Bloodlines Are Noble, But Only One Has Wolf Paws