The first day of Warhammer Fest Online is now underway, and we’re kicking things off in the Mortal Realms.

We’ve got some amazing things to show you today. Settle in and get comfortable, and make sure you’re well hydrated. We don’t want you to do a spit-take all over your screen.

Let’s leap right in with the final instalment of Broken Realms.

Kragnos, the End of Empires

Free at last from his mystical bonds, the ancient god of earthquakes, Slayer of Dragons, and force of unalloyed destruction, has returned to rock the Mortal Realms.

The last survivor of an ancient race, Kragnos is like nothing we’ve seen in Warhammer Age of Sigmar. He’s worshipped as a god by the forces of Destruction, and it’s easy to see why. He towers over all but the Mega-Gargants, and tales of his might have been passed down since the Age of Myth. 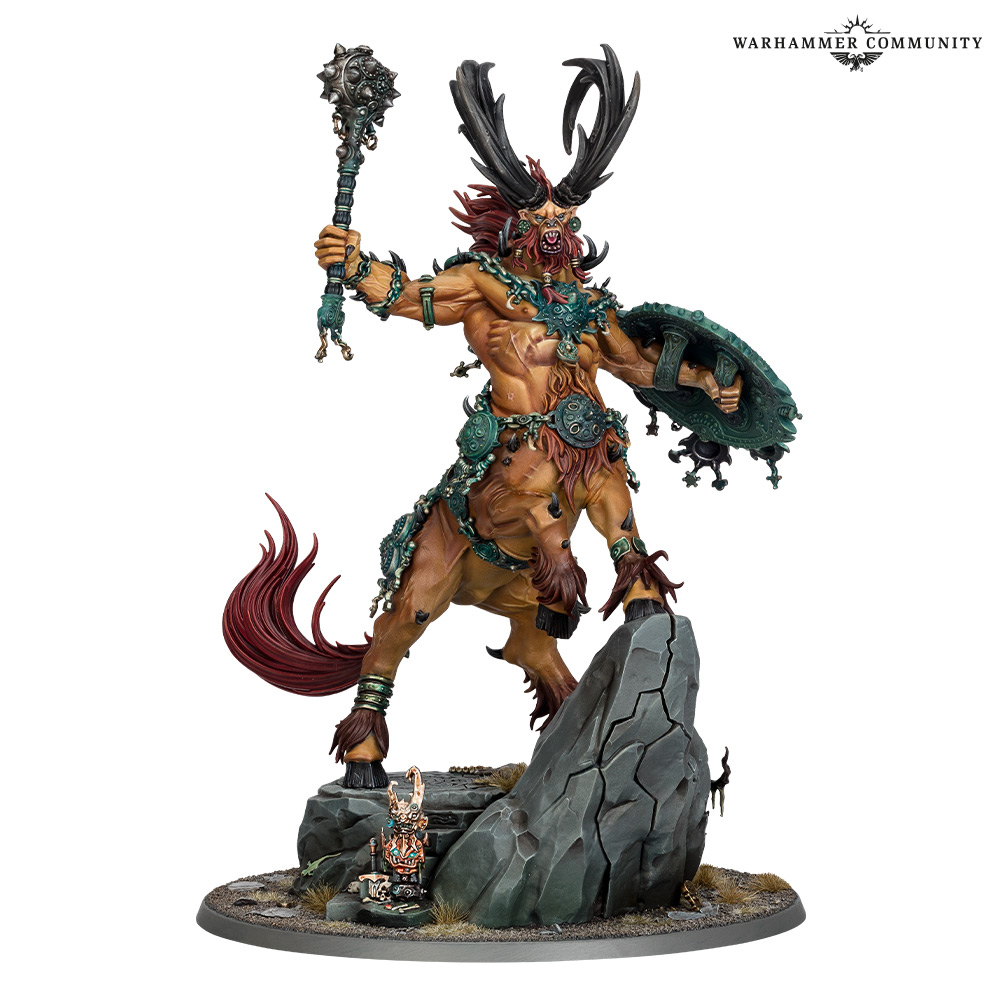 Kragnos is a nigh-unstoppable juggernaut of destruction, especially when wielding the legendary shield, Tuskbreaker. Armed with the Dread Mace, made from the heart of a mountain, his realm-splitting might becomes truly cataclysmic. Having hunted the ancient race of drakes nearly to extinction for little more than sport, there’s not much left that can survive his focused rage. 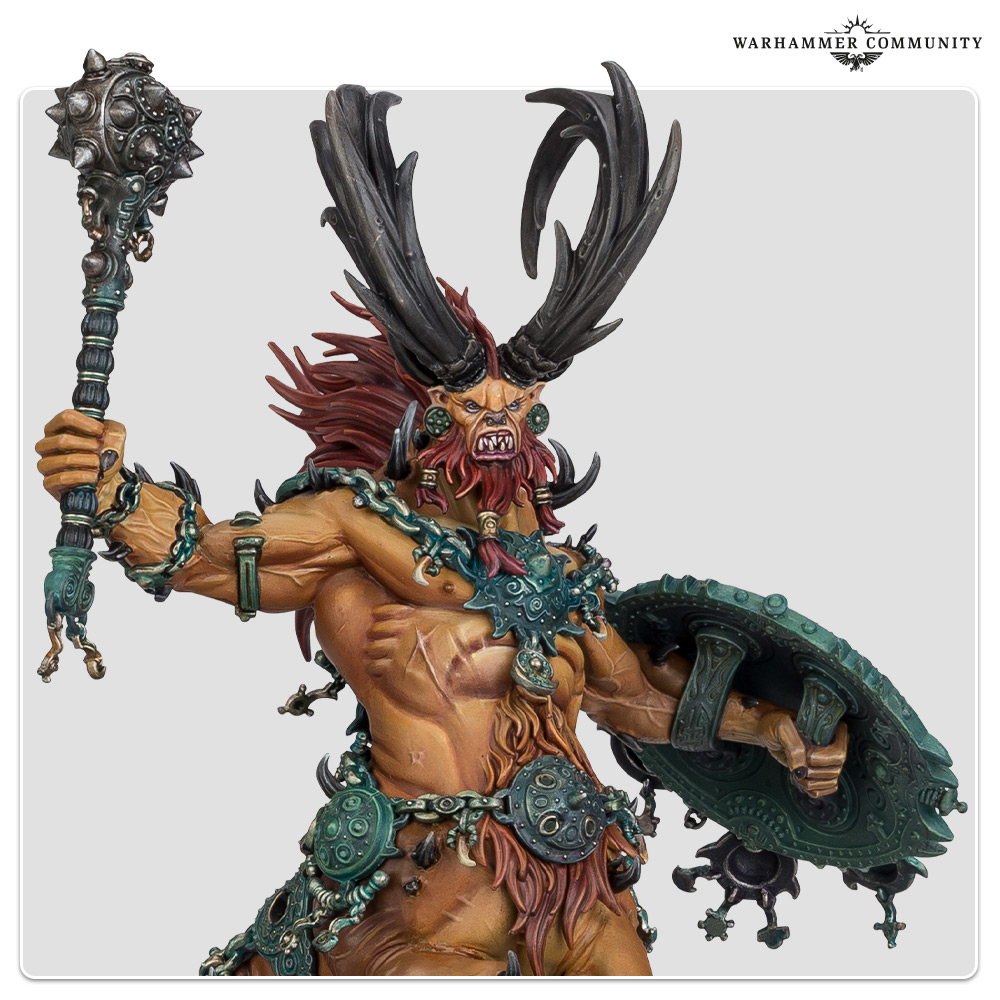 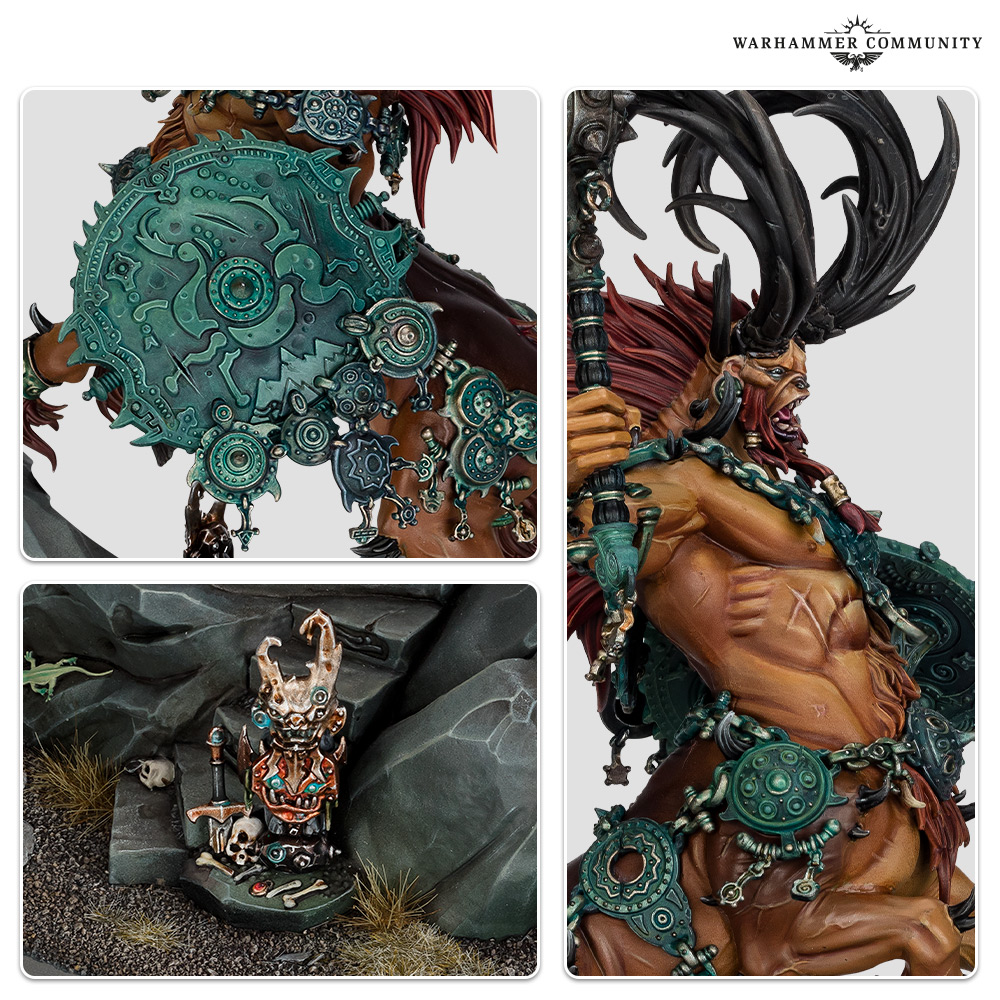 Kragnos commands respect from the armies of Destruction, who value strength and power more than anything else. They worshipped him in ancient times, and news of his return spread quickly throughout the Mortal Realms. You can even spot a devotional effigy on his base, similar to those popping up all around Ghur, and beyond – now who might be building those?

As legend has it, the disc of his shield, Tuskbreaker, earned its name by chipping Gorkamorka’s tooth. We love it because it’s got a stylised picture of Kragnos on it, including the shield itself. 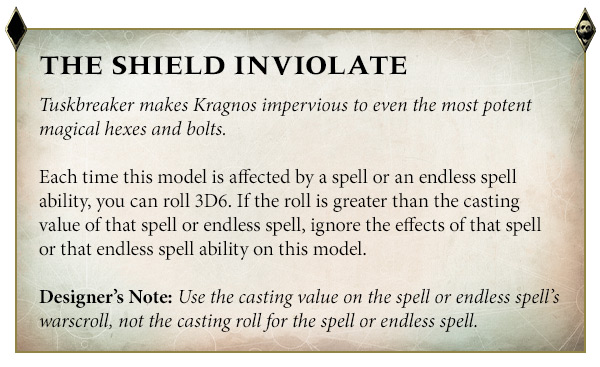 You can learn all about this returning deity in Broken Realms: Kragnos, which will finish out the series with a bang. 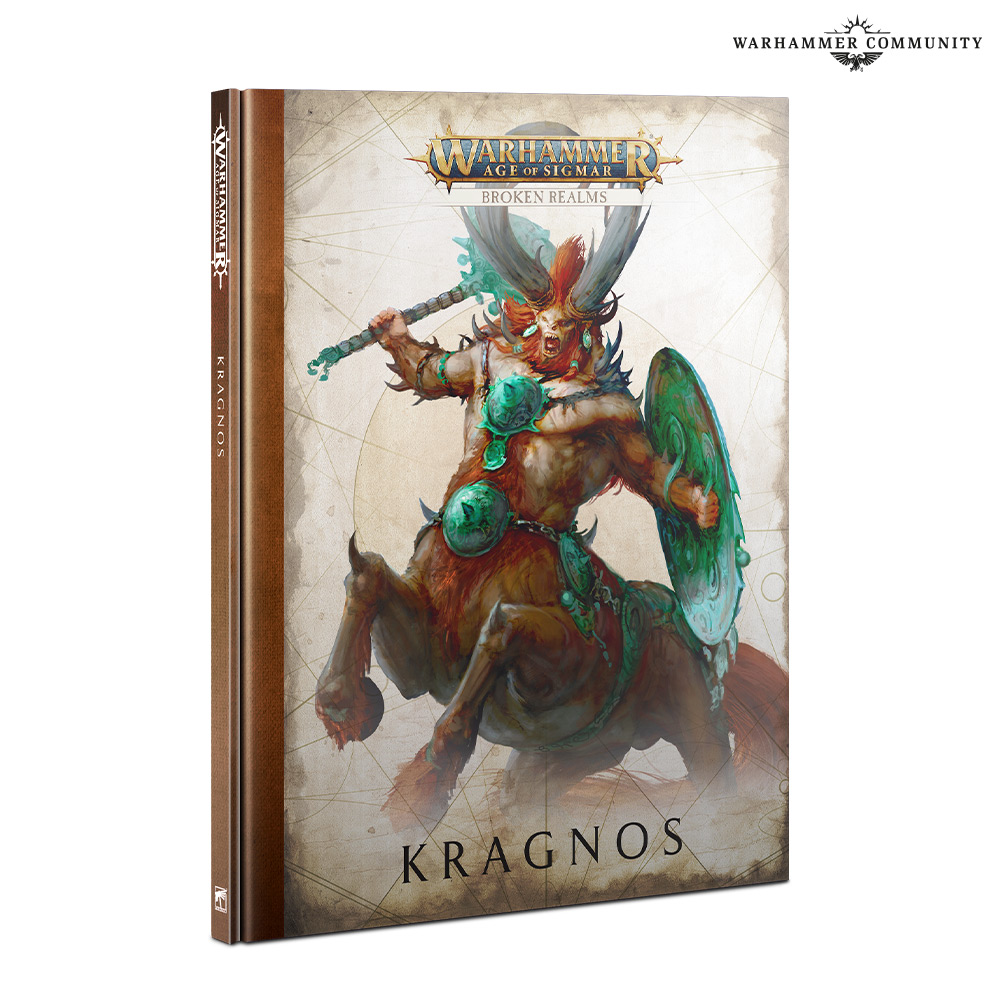 If you’ve been keeping up with the events of the Broken Realms saga (catch up here if you don’t mind some spoilers), you know things are heating up as the Soul Wars come to a close. Suffice to say there’s been a massive shift in the power balance of the Mortal Realms, and some of the biggest players are about to get involved.

You’ve already seen new models like Lord Kroak, and the Talon and Voice of Slaanesh. You don’t have much longer to wait before you find out what role they all have to play. As you might expect from a book featuring the god of earthquakes, Broken Realms: Kragnos will shake the Mortal Realms to their core. 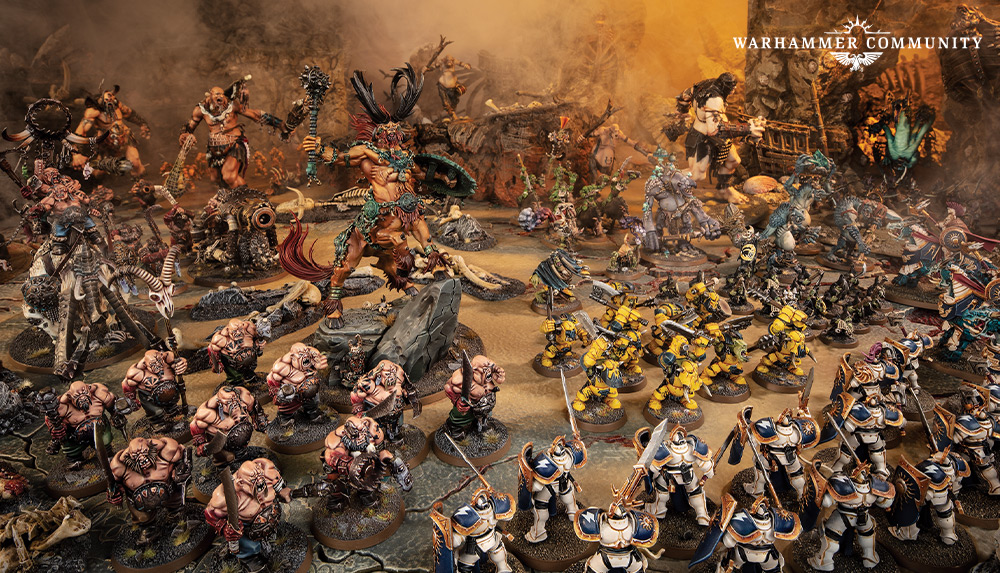 And now for some news from Shyish… 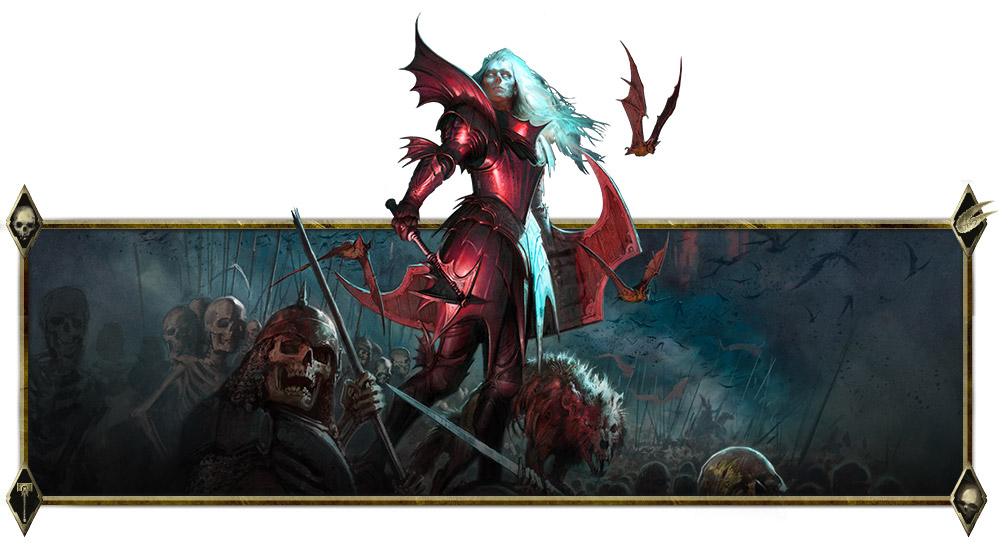 You’ve seen loads of new vampires and undead models recently, but it wasn’t everything.

The upcoming battletome details several vampiric bloodlines, each with their own history and culture. The ancient beings that lead them are some of the strongest beings in all the Mortal Realms.

Lauka Vai, the Mother of Nightmares

Vampires of the Avengorii dynasty seek to slake their thirst on the very largest and strongest prey – and they’re led to battle by Lauka Vai. Her twisted body rears up high over the battlefield – the splendour and horror of her form representing the darkly irresistible nature of the Soulblight Gravelords. Lauka Vai makes the perfect centrepiece to your collection, and we can’t wait to see how people paint her up. 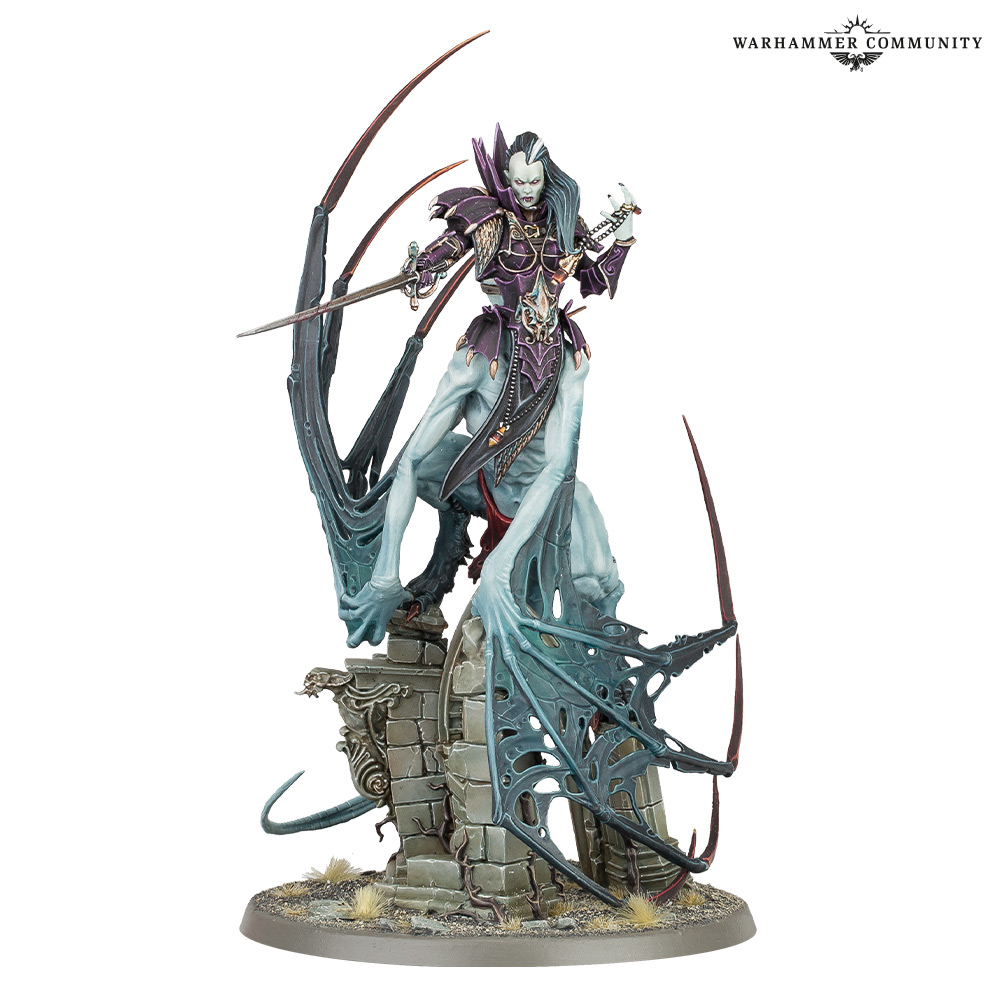 Lauka Vai is the undisputed commander of a murderous clan of beasts and monsters. Though she retains an aspect of noble knighthood, her dark thirst drives her to commit unspeakable acts of slaughter. 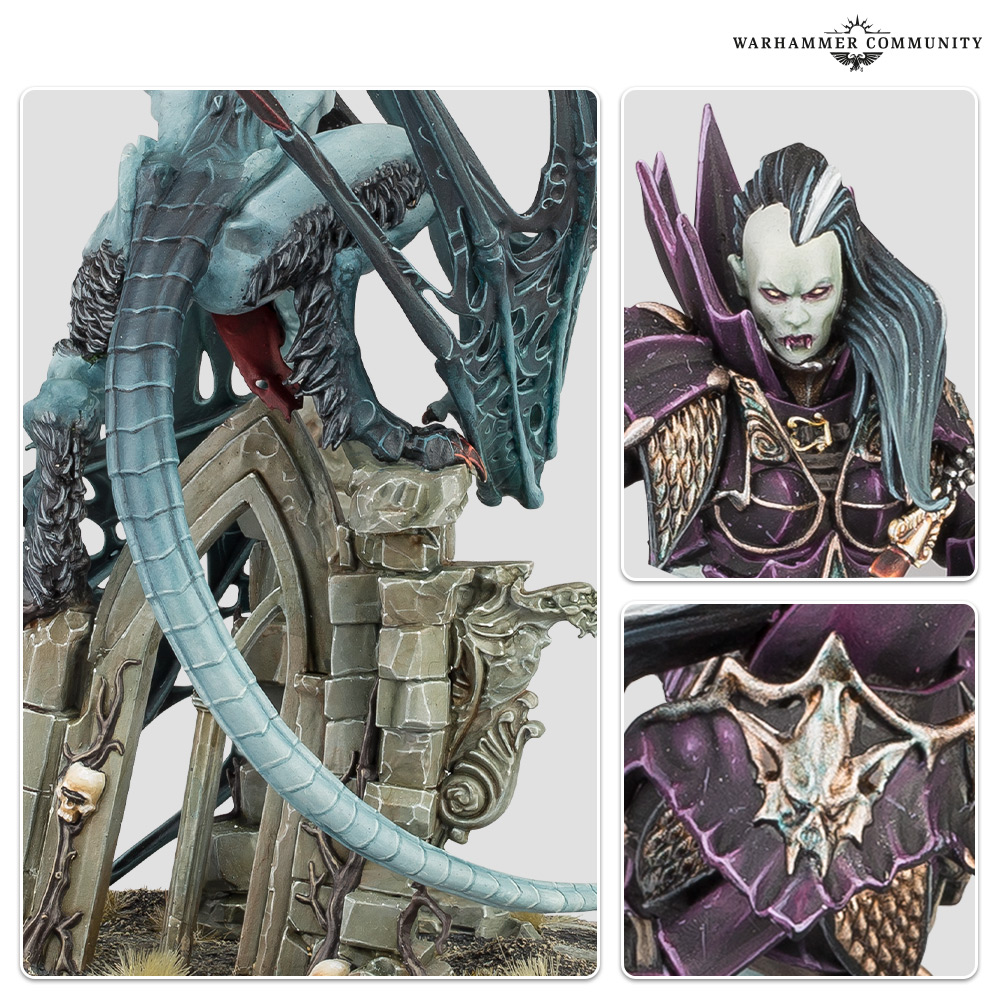 A hideous amalgamation of bat, drake, and humanoid body, Vai is nevertheless possessed with a sliver of self-control and even conscience. She remembers the pride she felt as a fierce warrior queen, and she hasn’t allowed herself to succumb completely to her instincts.

You can also build this incredible kit as a mighty Vengorian Lord, a new Leader option for the Soulblight Gravelords. 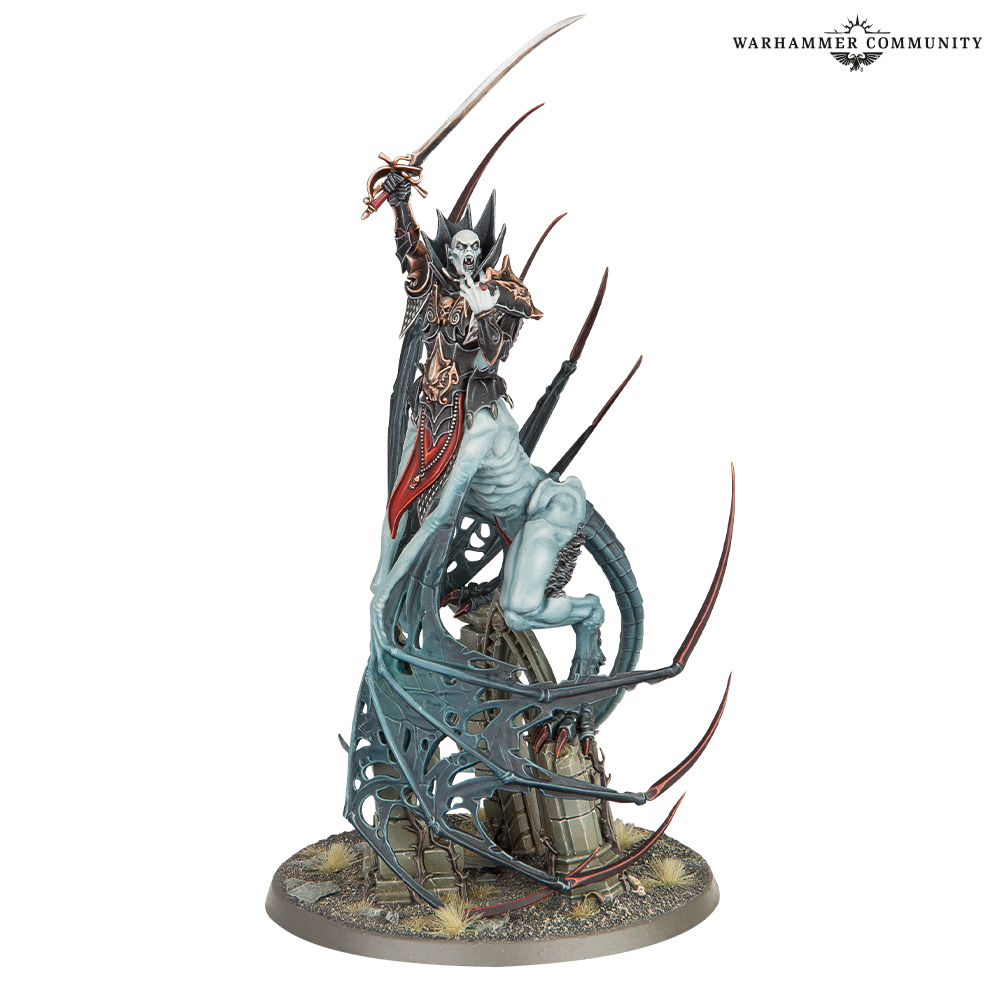 Embodying the true nature of all Soulblight vampires, these transformed lords revel in self-loathing. Vengorian Lords are powerful warriors and wizards – fighting at the head of Soulblight Gravelords armies from every dynasty.

Some bloodlines are altogether different, like the animalistic Vyrkos dynasty. Talking of which… 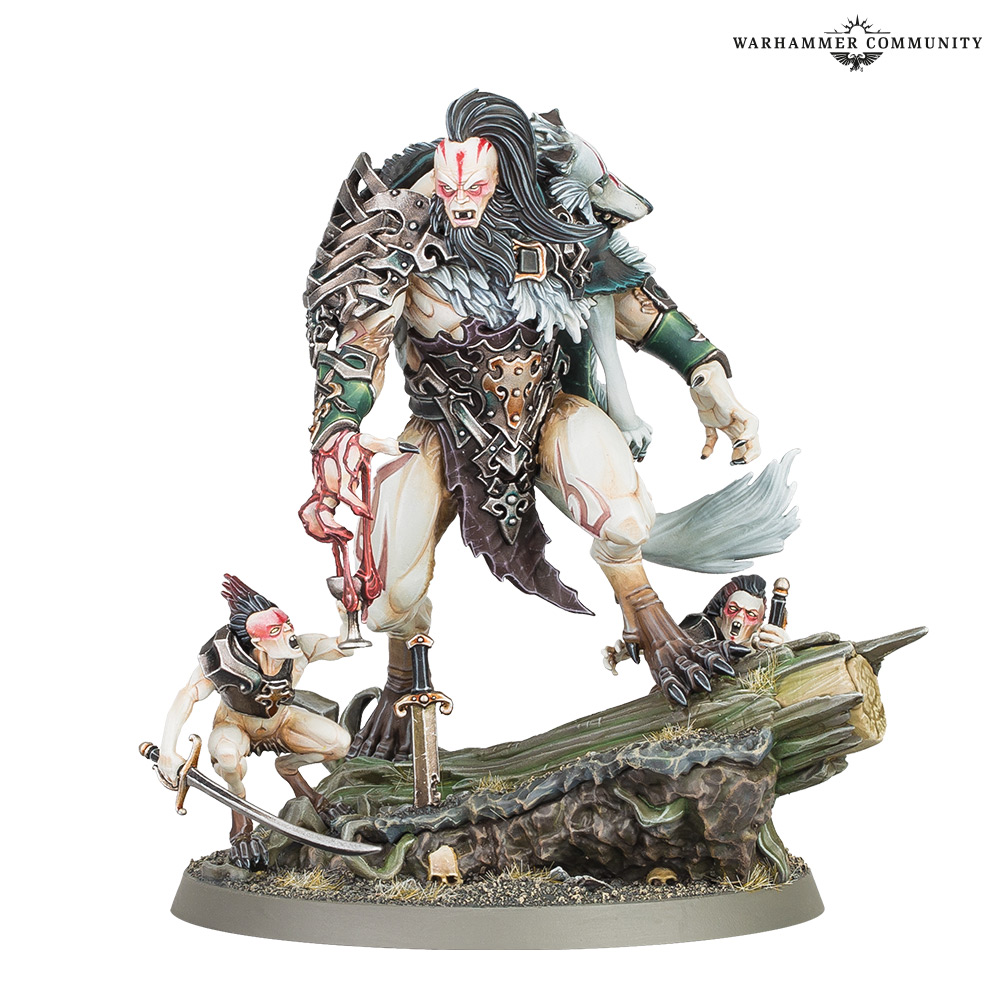 As it turns out, rumours of Radukar the Wolf’s demise have been greatly exaggerated. Now known as the Beast, his animal rage has been unleashed. He bides his time prowling Shyish and plotting revenge. Swollen with power and corrupted in form, he has retained his animal cunning, lust for power, and thirst for blood (and that wolf-pelt cloak, which honestly fits better now). 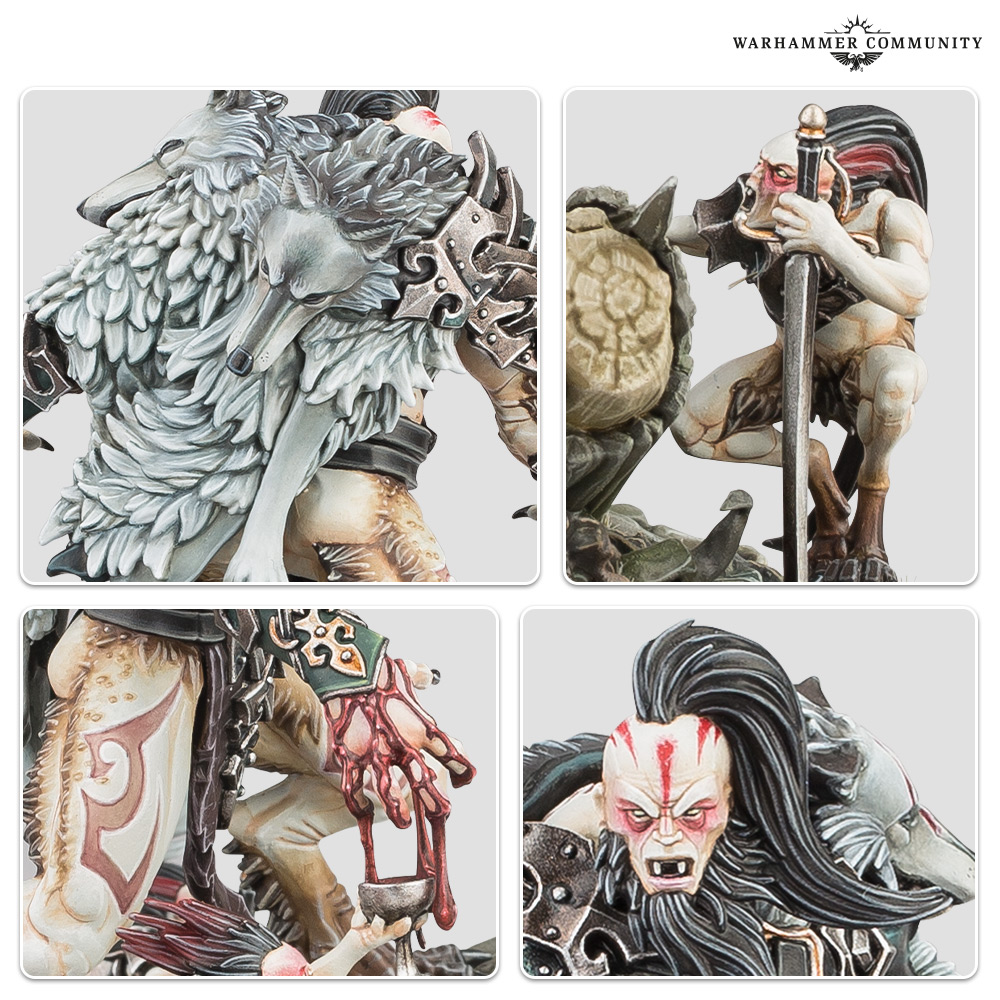 But Radukar isn’t the only member of the Vyrkos bloodline who’s on the rise, nor is he the oldest… 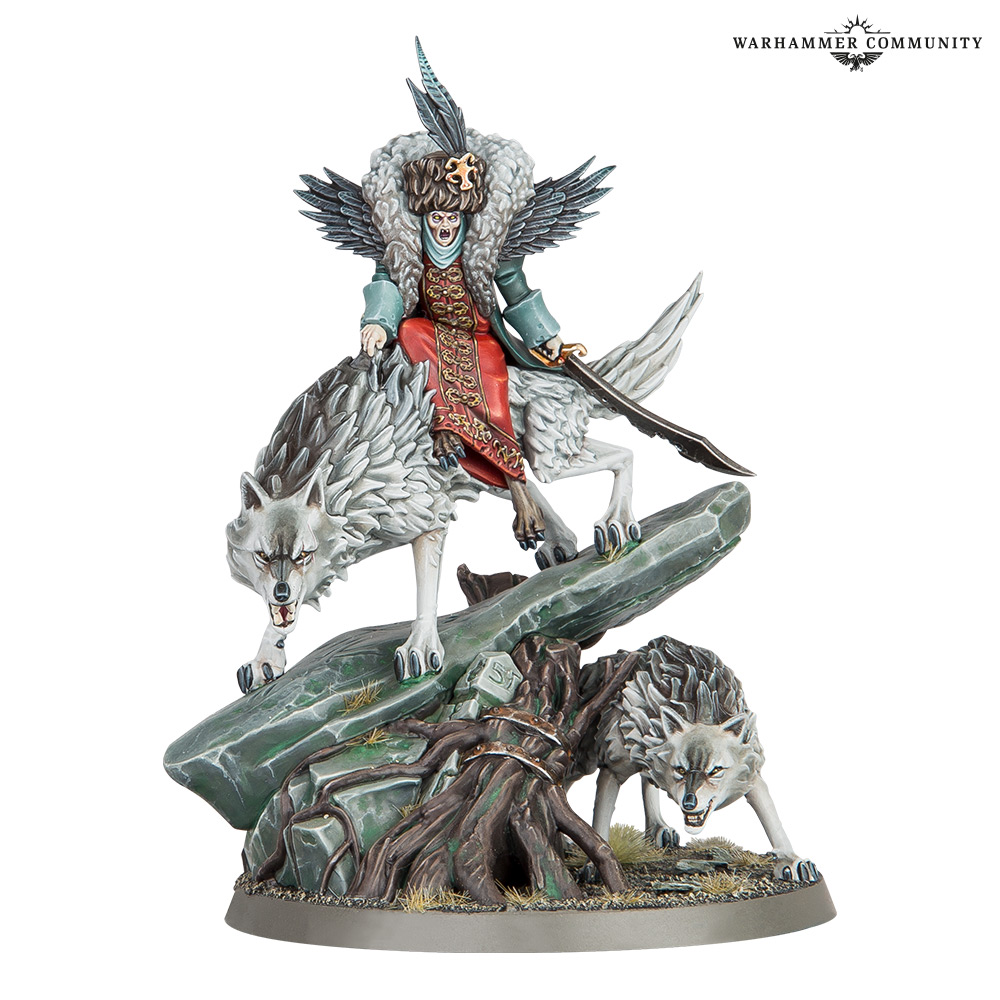 A vampire ancient beyond calculation – and a powerful sorcerer to boot – the matriarch of the Vyrkos is a force to be reckoned with. She’s said to be able to command Dire Wolves directly and even curse living mortals to become wolves with a gesture of her wizened hand.

Dire Wolves are a Battleline unit for any Soulblight Gravelords army, fighting not only for the Vyrkos and their vampiric kin, but all manner of undead forces.

And with that, you’ve seen all the new models for the Soulblight Gravelords. Keep an eye out for more news about when you can expect to get your blood-drenched hands on them. 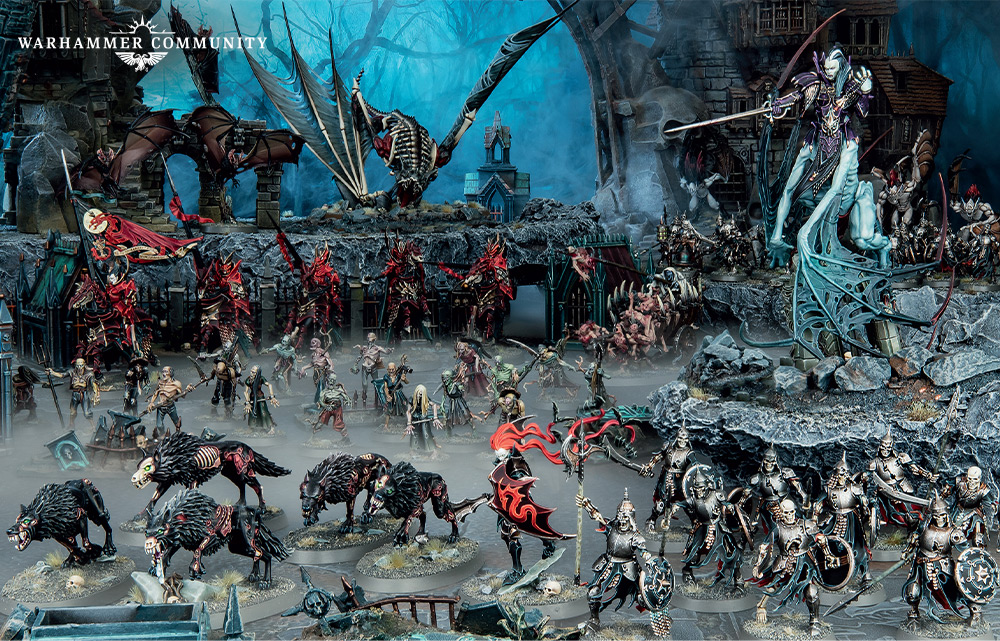 We’re not quite done with Warhammer Age of Sigmar news just yet.

Soon you’ll have another way to experience the thrills and action of the Mortal Realms, right on your mobile phone.

It’s awesome to see so many games set in the Warhammer Age of Sigmar universe. There are more ways to explore the setting than ever before. Watch this space for more news about Soul Arena as soon as we can share it.

We love to show you some of the jaw-dropping models coming to Warhammer Age of Sigmar soon, but don’t just take it from us. The studio team that puts all this awesome stuff together have a lot to say about the games and models they’ve worked hard to create. To that end, each day of Warhammer Fest will feature an interview. Today, Jes talks about the impact of the Broken Realms storyline.

And with that, Day 1 of Warhammer Fest Online is in the books. Be sure to tune in tomorrow (and every day through to Saturday) at 6pm BST for more model reveals and breaking news on upcoming releases. You can find the daily schedule right here if you missed it.

We know you’re excited, and we want to hear about it. Head to the Warhammer Age of Sigmar Facebook page and Twitter and tell us what’s got your blood pumping. Make sure you sign up for our email newsletter and we’ll let you know when everything is up for pre-order.

The Mystery of the Vyrkos’ Wolf Paws Has Been Keeping Us Up at Night. It’s Time for Answers

Can’t choose between bats and wolves? Have both with this Soulblight Gravelords dynasty.

Quiz – Which of These New Slaaneshi Daemons Are You?

The Talon and the Voice of Slaanesh are coming to the Mortal Realms – find out which one you most resemble.