Welcome to The Dead and the Divine, our first online preview of 2021! Over the next hour or so, we’ll be showing off some incredible reveals for…

Grab a drink, fix some snacks (we advise something with garlic in), and prepare your jaw because it will be dropped several times during our live Twitch stream.

Last year, the Adepta Sororitas received a fully updated range, including iconic units such as Battle Sisters and Repentia released in plastic. Did you think that would be all? Oh, ye of little faith.

2021 will see even more reinforcements on the way for the Sisters of Battle. We’ve already unveiled the new Palatine model, now take a look at the Paragon Warsuit. 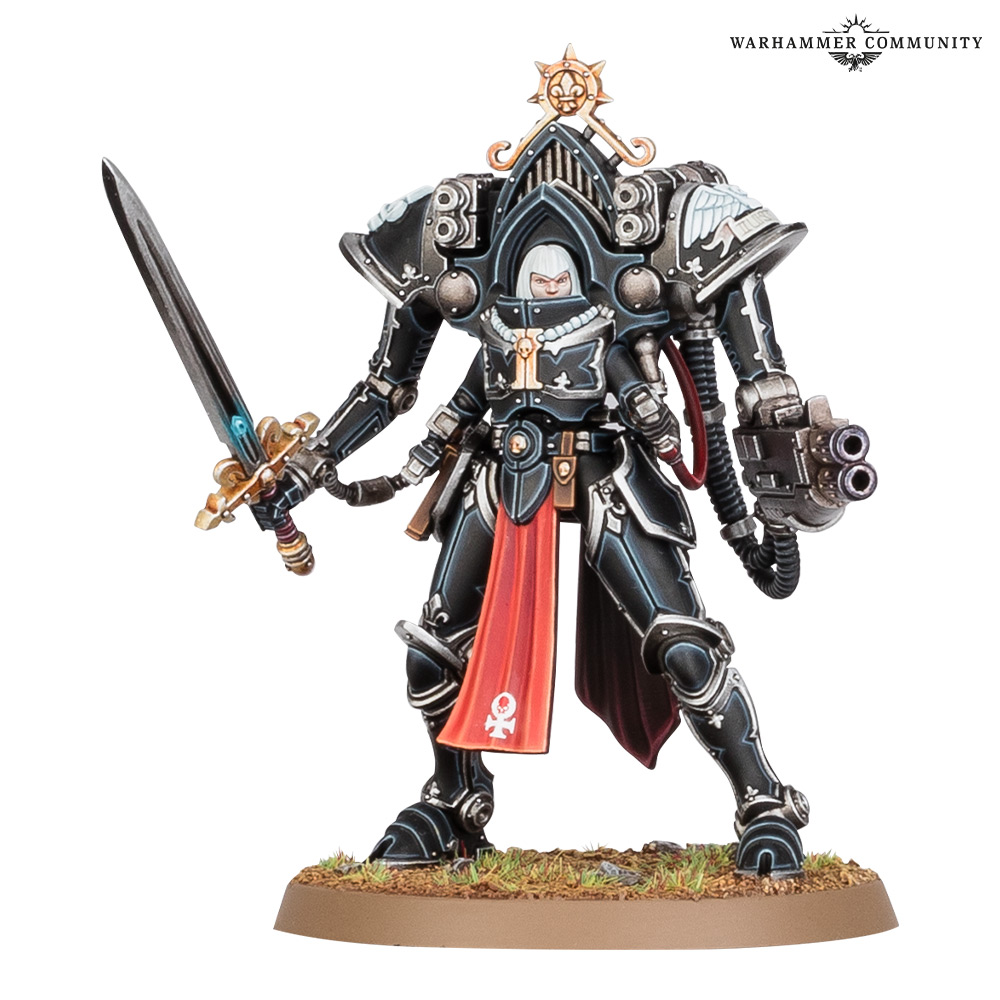 We recommend that if this thing ever knocks on your door offering to tell you all about the God-Emperor you should let them in and take one of their pamphlets.

We’re just getting started for the Adepta Sororitas – in 2021 your faith will be rewarded even further.

Staying in the 41st Millennium but venturing into even darker corners, a new expansion is on the way for Kill Team.

Focused on fighting it out in the confined battlegrounds of the Pariah Nexus, this expansion introduces new rules for close combat encounters in its claustrophobic depths. The box also features kill teams for the Space Marines and Necrons, both comprising brand new models. The Space Marines have sent a Captain with master-crafted heavy bolt rifle and five Heavy Intercessors to carry out this dangerous mission.

Trying to take out the Space Marines in the nightmarish gloom is a Necron kill team made up  of a Chronomancer – a type of Cryptek that can harness temporal energies to weaponise time itself – and five twisted and ghoulish Flayed Ones.

Can the Flayed Ones make the most of the darkness to cut down their enemies? Will they start the first fashion trend of 2021 – Space Marine skin? Perhaps those heavy bolt rifles will make scrap metal of the Necrons before they get the chance?

You’ll be able to find out the answers when Kill Team: Pariah Nexus drops later in the year. While you wait, take a look at the full (and we mean FULL) contents of the boxed set. 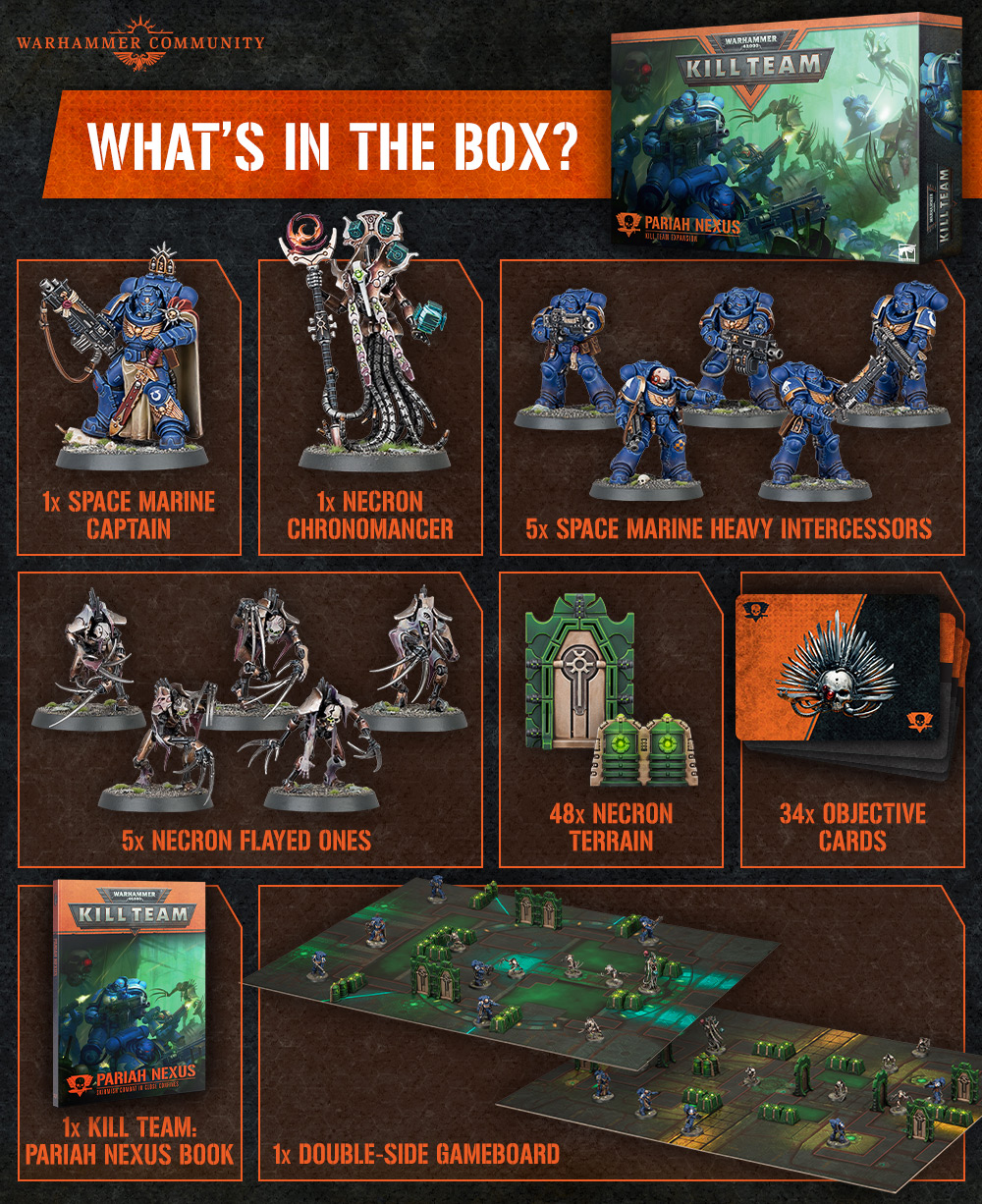 The kit also includes all of the rules to use the models from the Indomitus boxed set in your games of Kill Team, including Assault Intercessors and Necron Warriors armed with gauss reapers.

With models, rules, AND terrain, it’s everything you need to start playing Kill Team.

Anyone who has ever referred to the models for Adeptus Titanicus as “tiny Titans” better get ready to eat their words as we introduce the latest god-engine.

The Warmaster Titan is for those times when even a Warlord is not quite big enough. It’s armed with a revelator missile launcher and a pair of plasma destructors, meaning there’s nothing that can stand up to its devastating firepower. 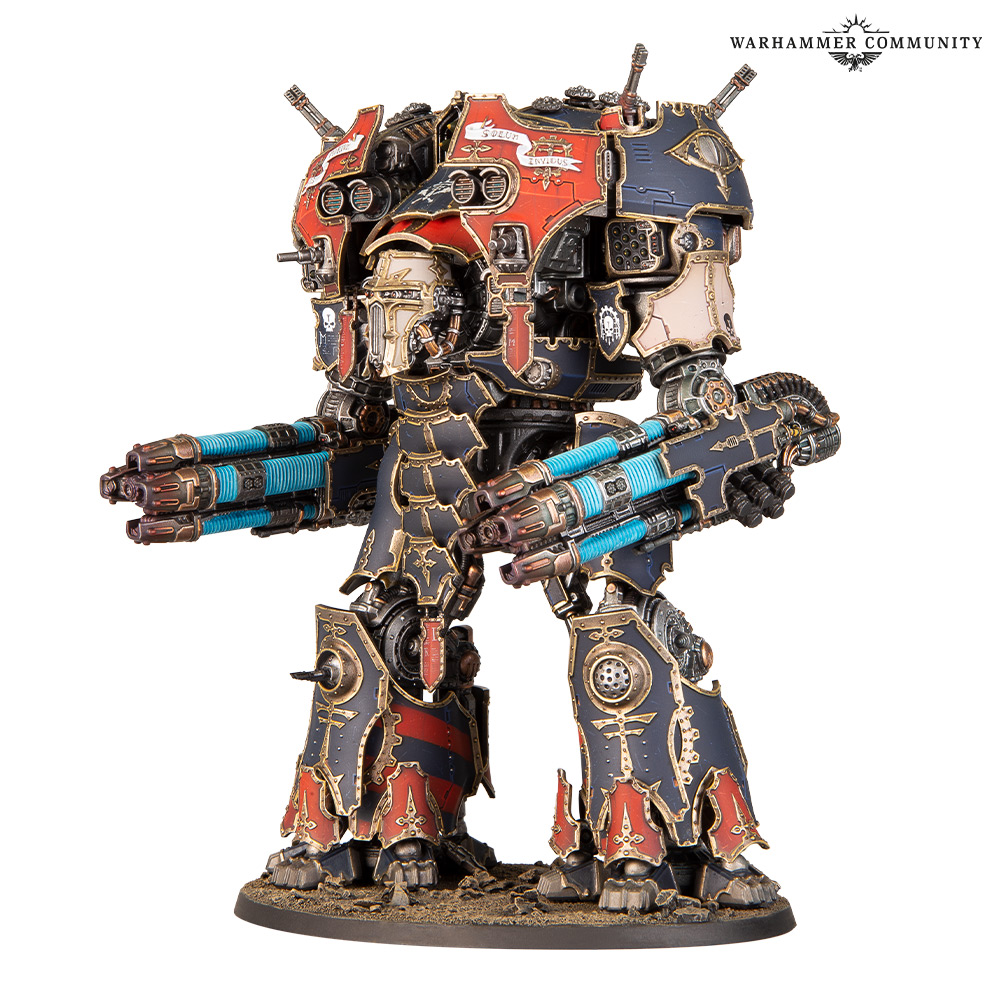 If you absolutely, positively have to destroy everything on the battlefield, you need the Warmaster Titan. 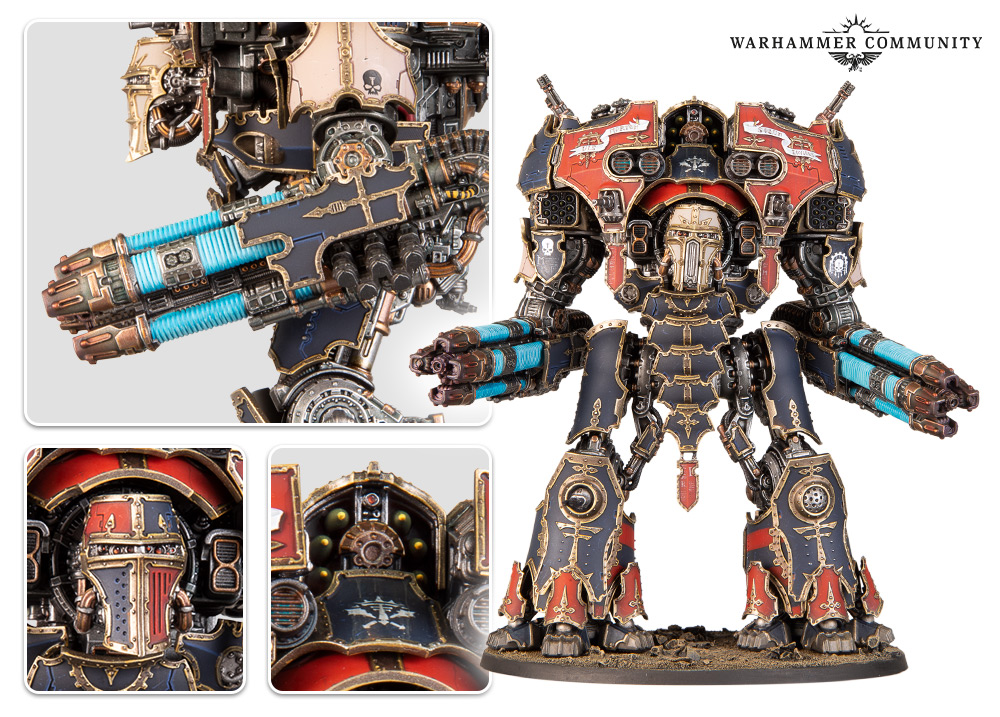 But just how BIG is the Warmaster? Take a look at it alongside its fellow god-engines, and you’ll see that even the word ‘mahoosive’ doesn’t quite do it justice.

Also coming soon for Adeptus Titanicus is the new Loyalist Legios book. It’s packed with all of the rules and background for 16 Loyalist Titan Legions and 12 Loyalist Knight Households. 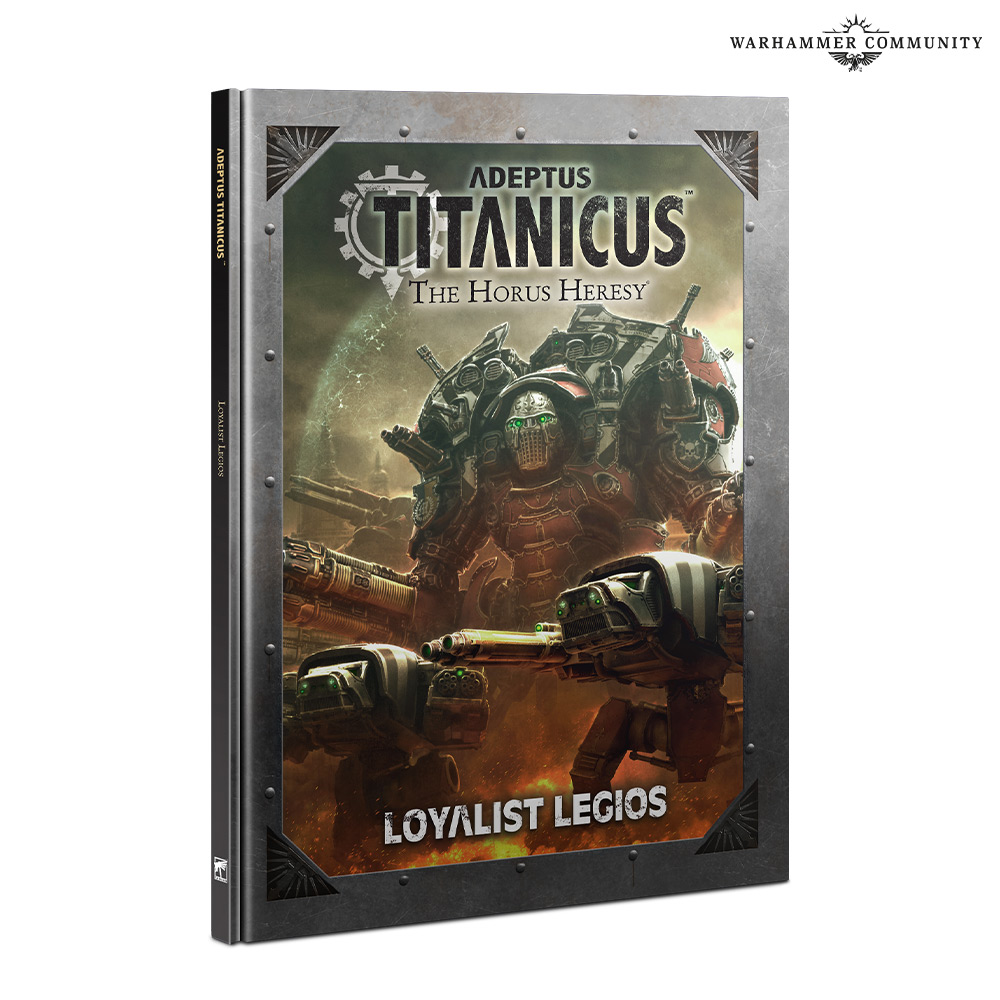 With more lore than ever before and a range of Loyalist-specific Titan upgrades and Stratagems, this book is all you need to end the civil war swiftly. Oh, and don’t worry if you’ve thrown your lot in with the arch-traitor Horus – you’ll be getting your own book later in the year.

In the Mortal Realms, Teclis has a plan to end the Soul Wars, but he’s going to need some help.

2020 saw the release of the glorious Lumineth Realm-lords range, and now this year will see reinforcements on their way for the aelves, including Sevireth, Lord of the Seventh Wind. 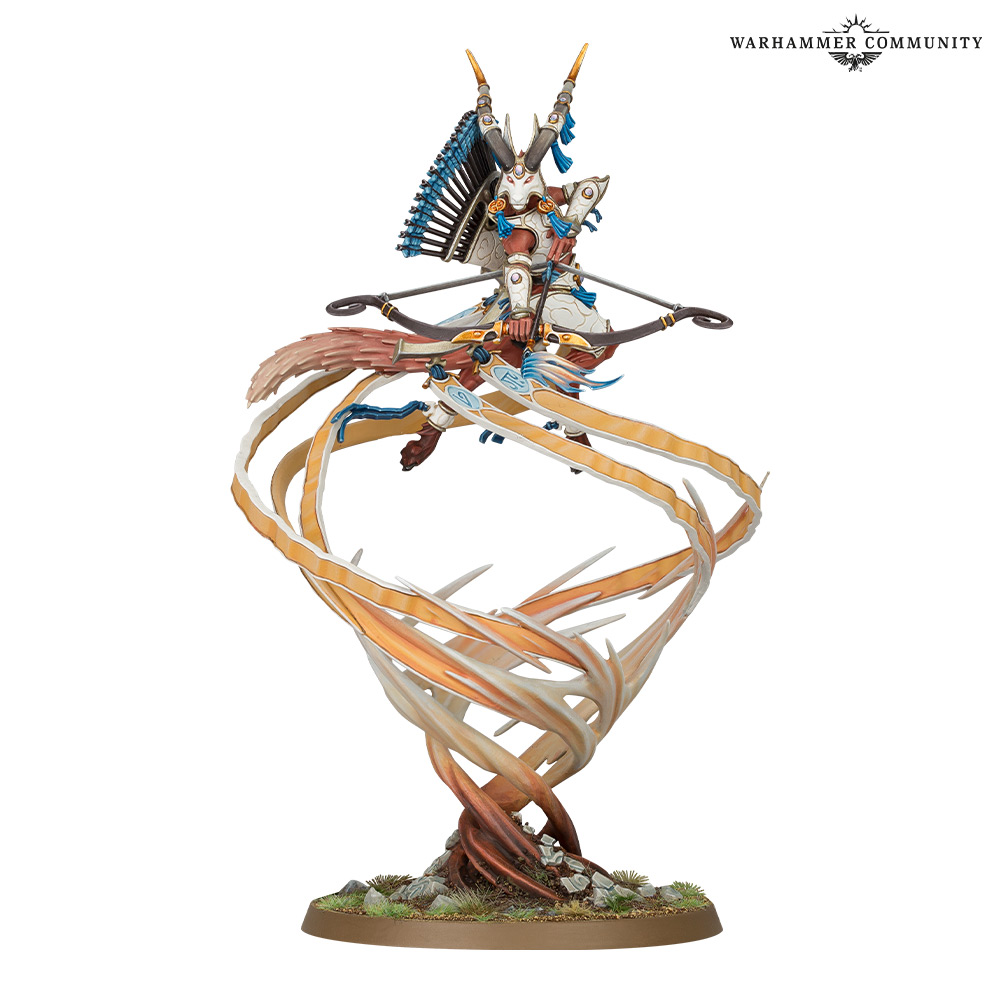 This fox-like creature is a demi-god empowered by the wind spirits of Hysh, just in case you thought that Teclis had peaked with mountains. 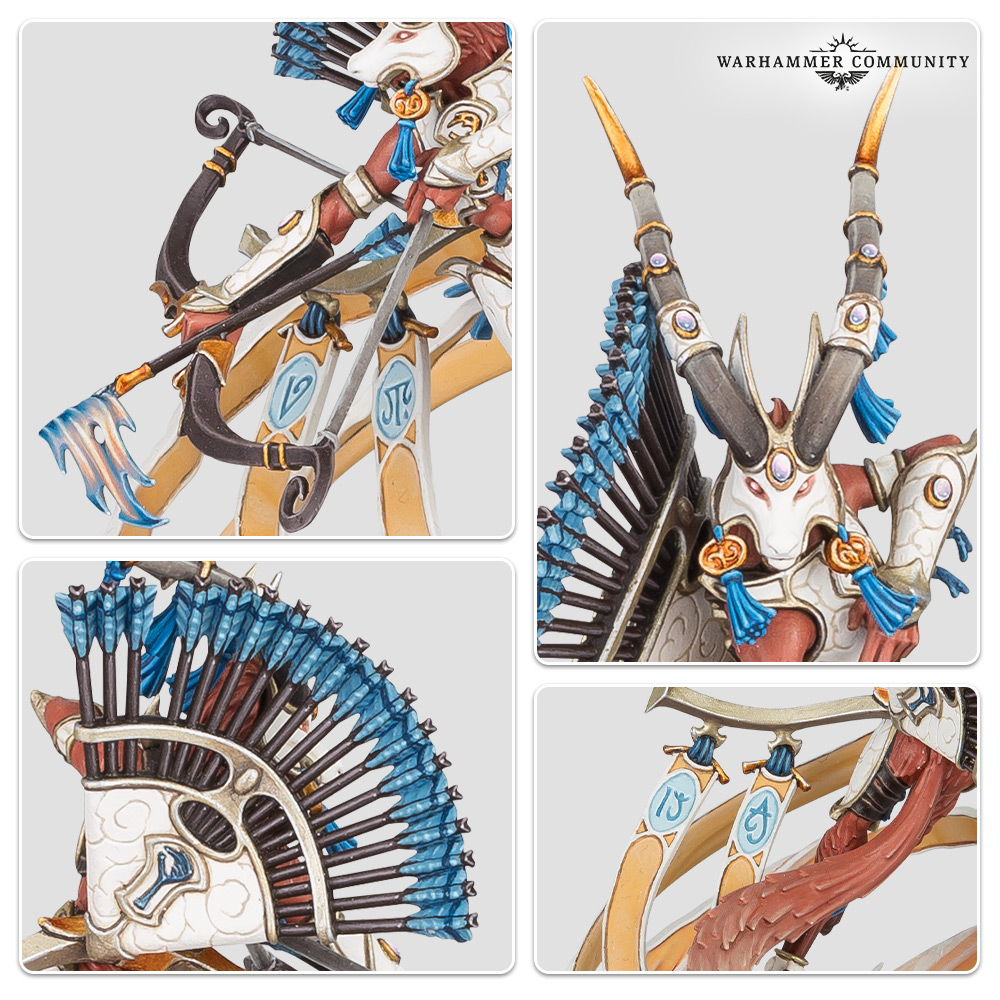 Archmage Teclis is also the cover star for the next book in the thrilling Broken Realms saga. The narrative sees the Lumineth Realm-lords taking the fight to Nagash and, after this epic clash, the Mortal Realms will never be the same again. Can the purest light of the Lumineth break the dark curse of Death? 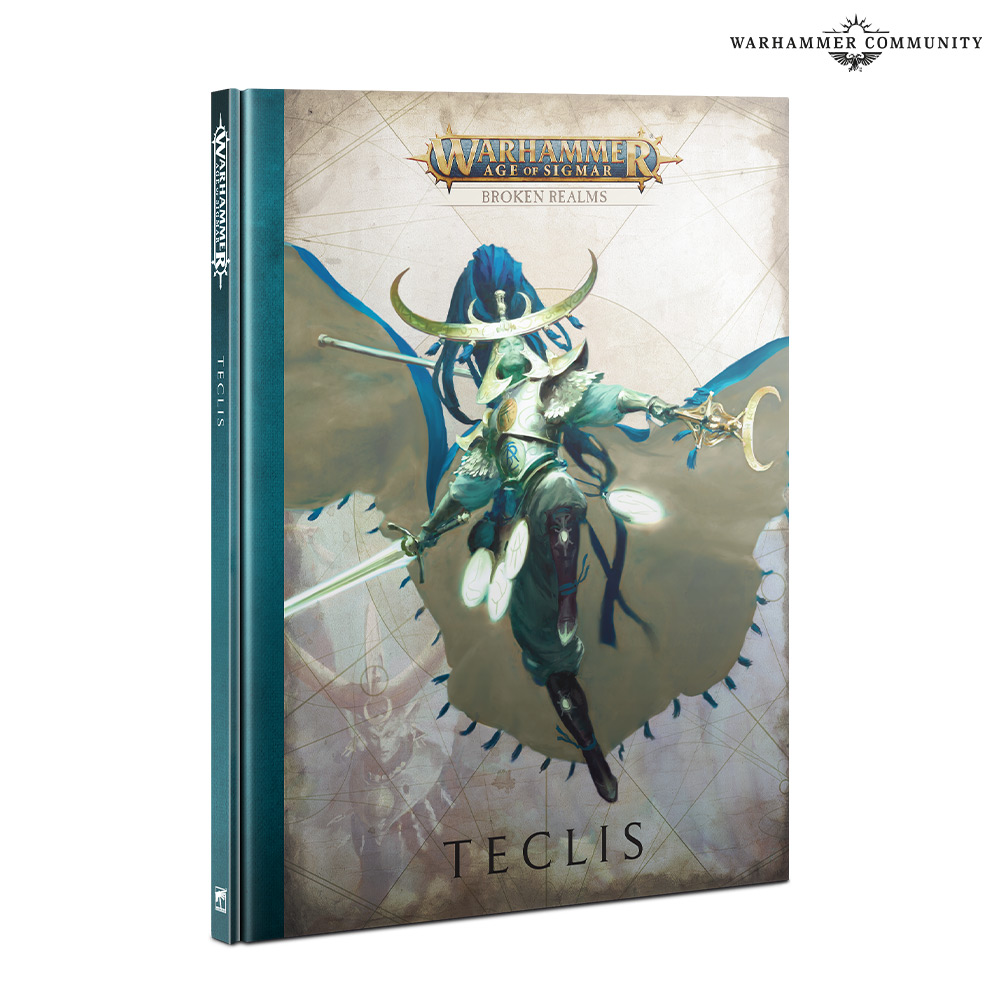 Along with new background that will forever change the Mortal Realms, the book features warscroll battalions for

There are also warscrolls for a swathe of new Lumineth Realm-lords units, including some that we saw earlier in the week, and unique battleplans that let you play out some of the battles from the narrative yourself.

Of course, Teclis isn’t going to have everything his own way, Morathi will see to that. After claiming to have achieved apotheosis during the opening gambit of the Broken Realms saga, she is ready to unleash her forces in a fresh assault upon the Mortal Realms. What better way is there to begin such a campaign than with a new battletome? 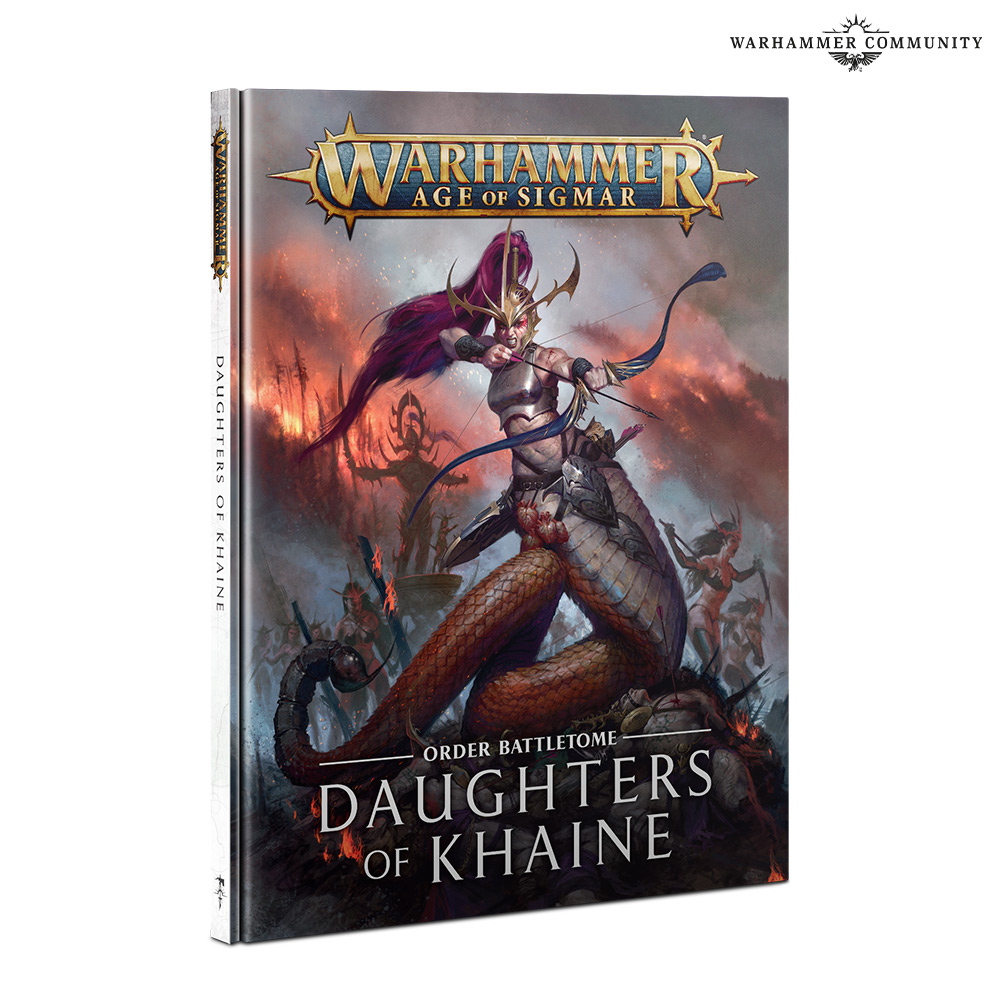 Along with their battletome, the Daughters of Khaine get three new Endless Spells. If you like your magic dripping with blood as you cast it across the battlefield (and frankly, who doesn’t?) you’ll love the Bloodwrack Viper, Bladewind, and Heart of Fury. 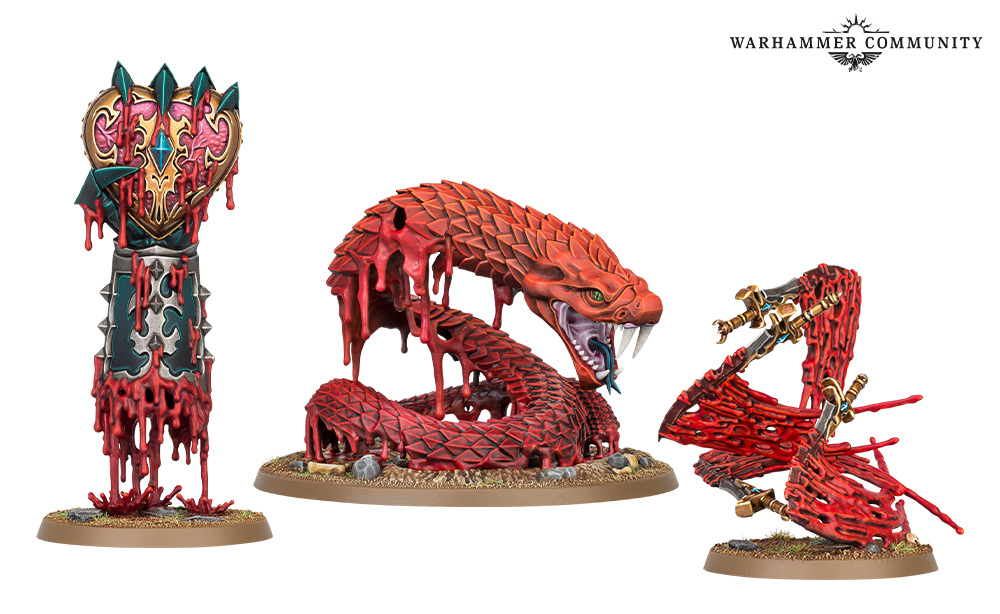 The battletome and Endless Spells come out at the same time as their sworn enemies, the Hedonites of Slaanesh. Will you side with the bloodthirsty murder cult of serpent assassins or the bad guys?

A deadly new warband is drawn to the living mountain, but can they control their hunger long enough to claim glory?

The Crimson Court bring their bloodlust to Warhammer Underworlds, and we hope that you’ve packed your decks with lots of wooden stake upgrades because garlic is very hard to find in Direchasm.

Speaking of vampires, an epic new Warhammer Quest game brings even more bloodsuckers to the Mortal Realms. If you and your friends have already defeated the Silver Tower and the Blackstone Fortress, you’ll find an exciting challenge ahead as you embark on the most dangerous quest yet, into the cursed city of Ulfenkarn.

With a revised and refined rules system and models that you’ve never dreamed of, we’re going to stick our necks out (not usually a good idea in Ulfenkarn) and say that the new Warhammer Quest might just be the best game-in-a-box that the fine folks at the Warhammer Studio have ever made – and they’ve made some corkers.

We can’t just leave you hanging like that though, can we? Of course not! Here are a couple of those incredible new models – the vampire hunter Jelsen Darrock and the villainous Gorslav the Gravekeeper. 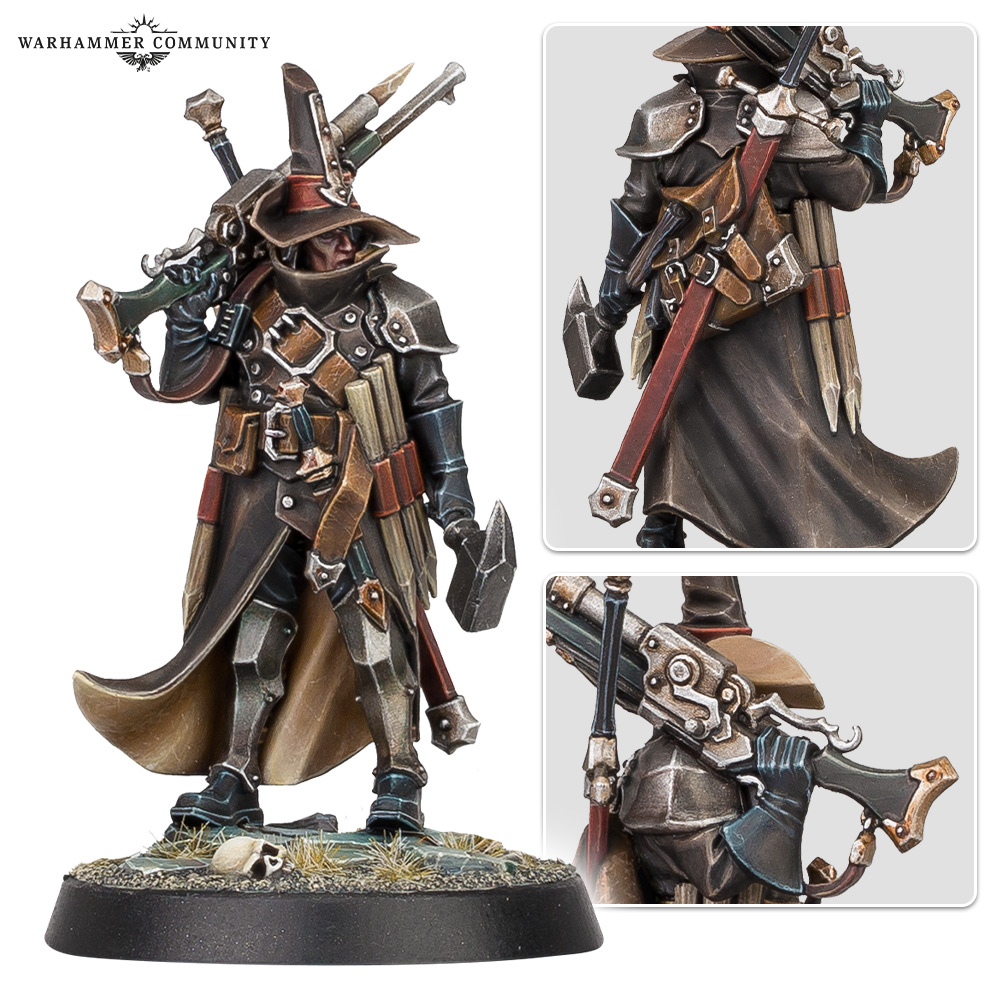 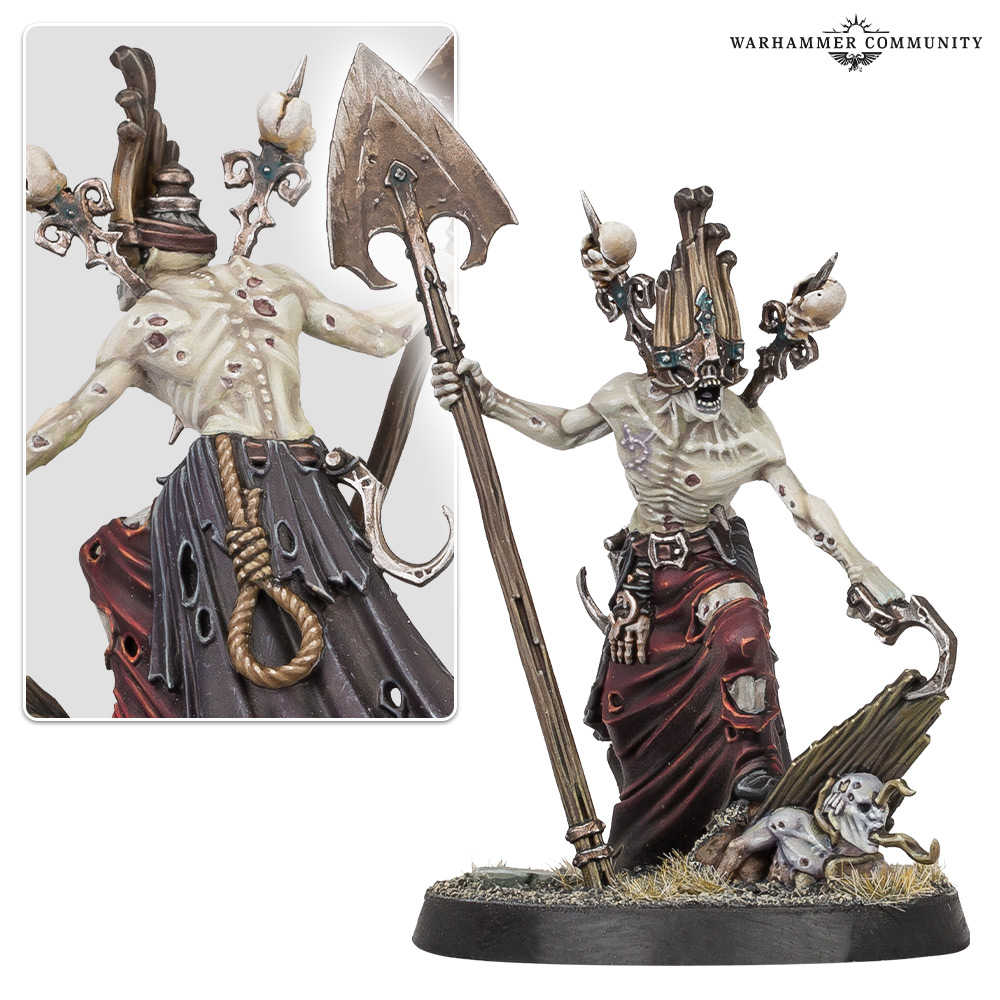 We’ll have much to reveal about Warhammer Quest: Cursed City over the coming weeks, but you can learn more right now by visiting the new website dedicated to the game.

That’s just a taste of some of the awesome things that we’ve got coming for you in 2021. As we get closer to release dates, we’ll be taking much more in-depth looks at everything so make sure that you’re signed up to our newsletter so that you don’t miss out. In the meantime, join us over on Facebook, Twitter, and Instagram to let us know which of this year’s releases you’re looking forward to most.

3 Dastardly Black Library Villains Who Prove Being Bad Is Best

Embrace your evil side and explore some of Black Library’s villains who make being bad look good.