Bob: Get a load of this, Jim. The Albion Wanderers have rocked up to the pitch wearing some truly shocking throwback uniforms.

Jim: Albion-est, I would NOT have guessed that retro attire would look so good these days. Cabal Vision just doesn’t do these colours justice, folks.

Bob: You’ve got to be tough as old boot leather to wear uniforms this loud to a game of Blood Bowl. 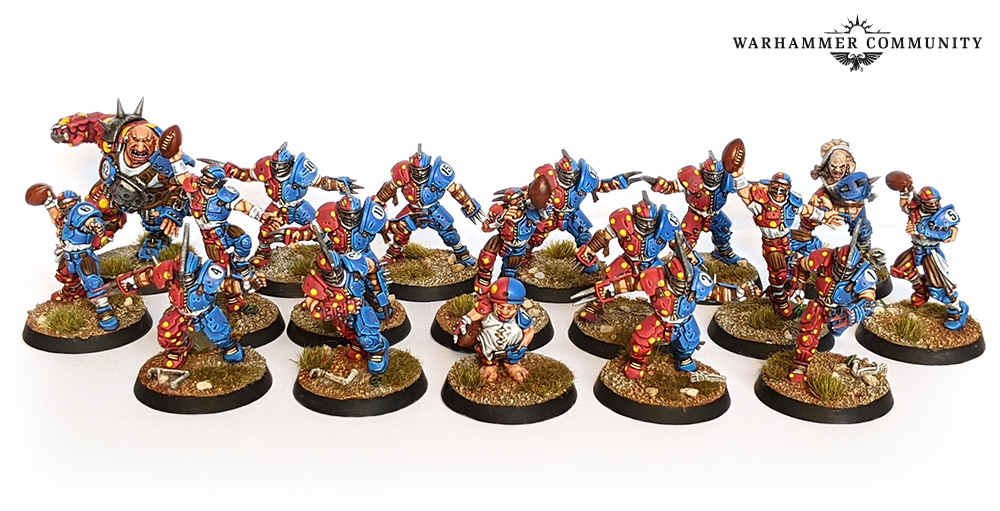 There are plenty of eye-catching Blood Bowl teams out there. But once in a while, a team comes along that brings an instant smile to the old-timers’ craggy faces. Hugo Darley is responsible for this authentic rendition of the classic Albion Wanderers uniform on modern models, which we have to say looks absolutely incredible. We tracked him down to chat about the project – here’s what we learnt.

Hugo: It started with the Ogre. I’d wanted to paint the model for a while, but I hadn’t decided on a theme. I asked my hobby group for inspiration, and Pete Knifton’s classic Albion Wanderers artwork came up.* 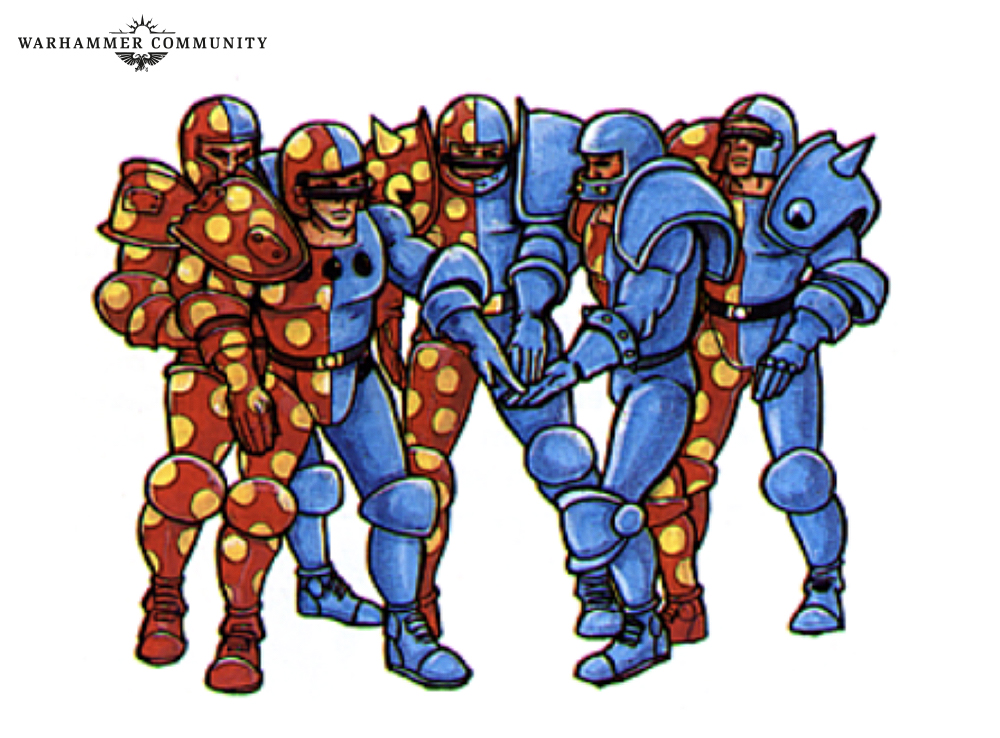 I hadn’t seen this colour scheme attempted on social media channels – though others had done the classic Bright Crusaders and Chaos All-stars schemes – so the challenge was set. 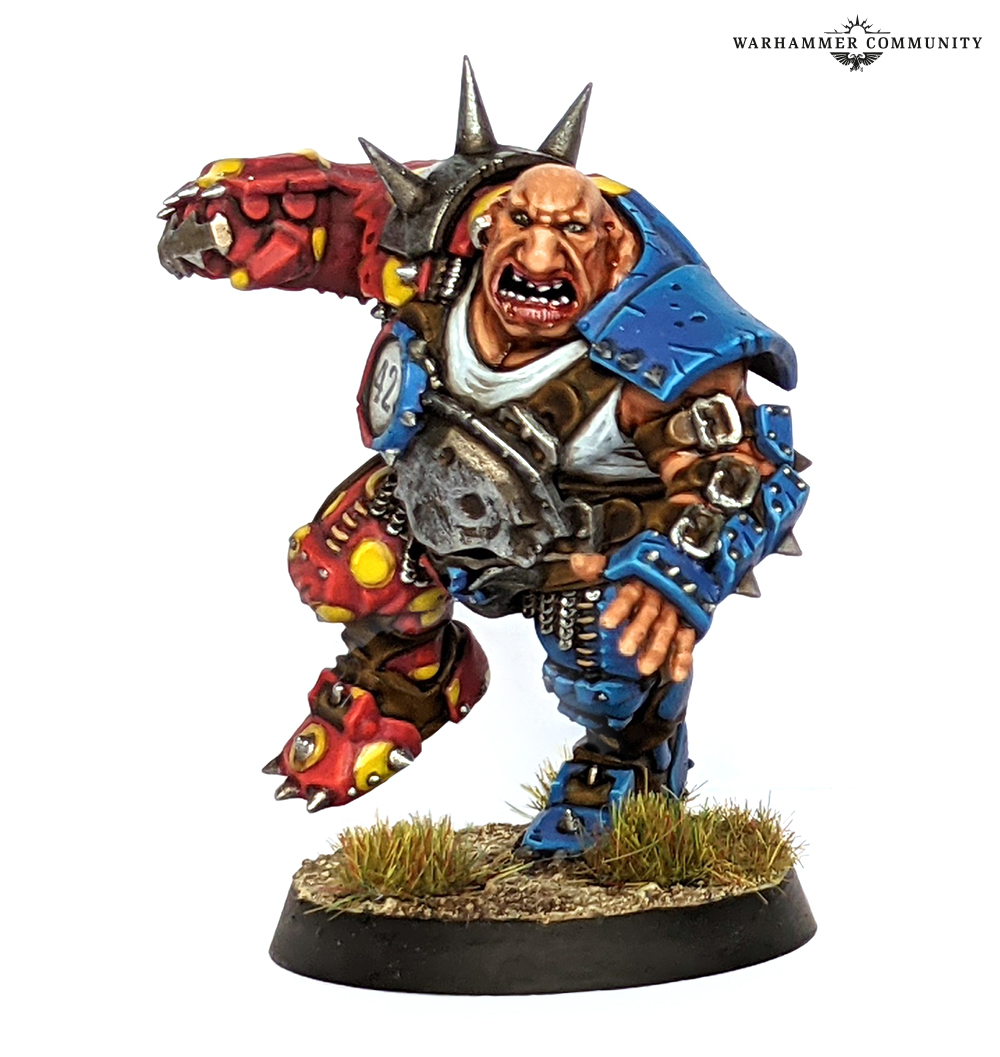 After I finished the Ogre, I thought it was pretty cool, so I got myself a Human team box. The Mighty Zug followed shortly afterwards, as did the Forge World Human booster pack for more variety. I recently added Cheerleaders too. 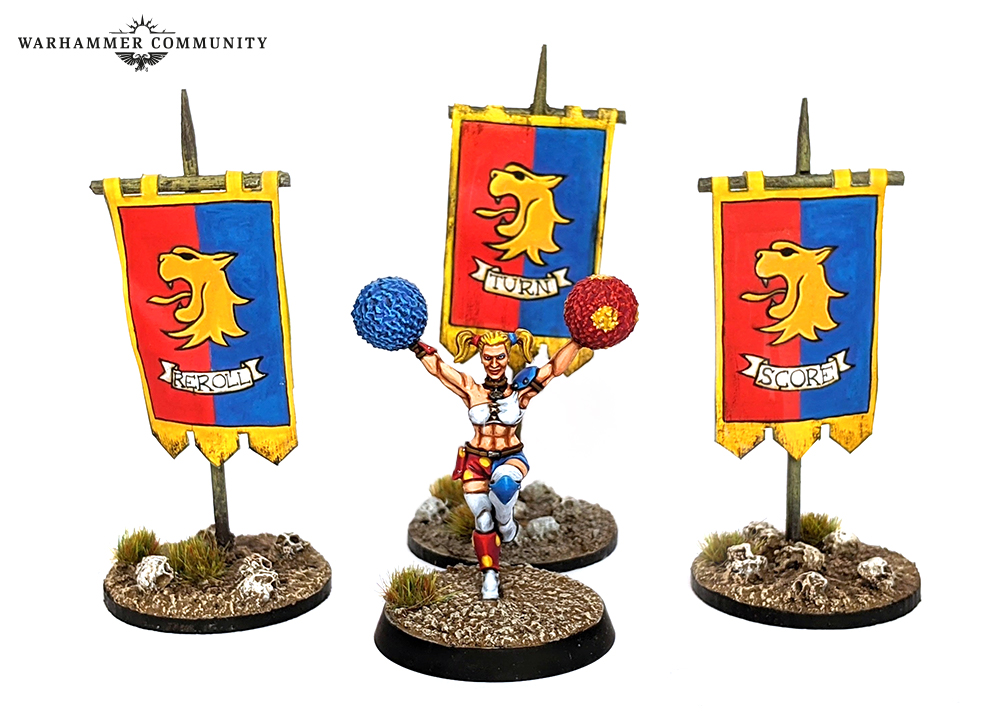 I saw this project as an opportunity for batch painting,** and after working out the colour scheme on the Ogre, I was ready to give it a shot. All in all, it was a very smooth process, and I wondered why I’d never tried batch painting before. 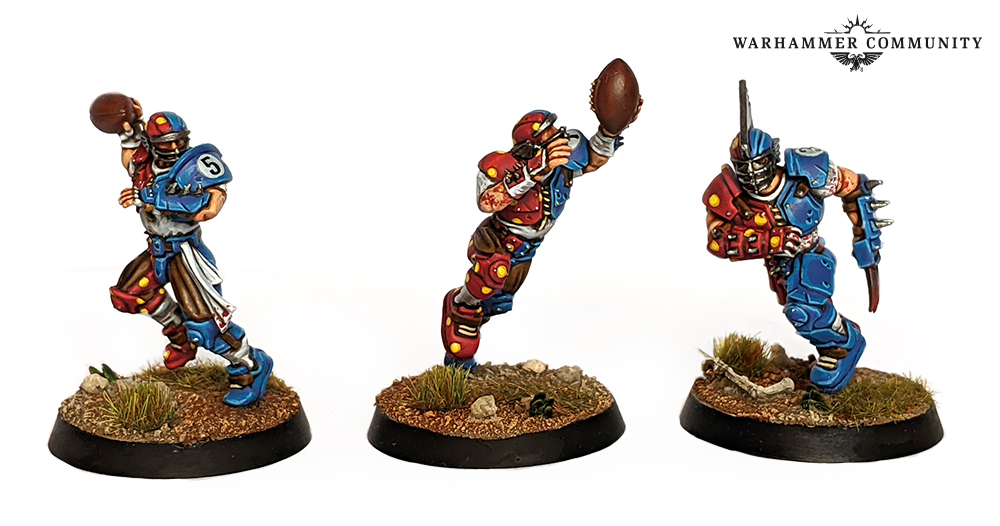 When batch painting threatened to feel repetitive, I took time out to paint other models or concentrate on a particular member of the team. Zug, for instance, was done in one go between initial layers and wash stages of the rest. 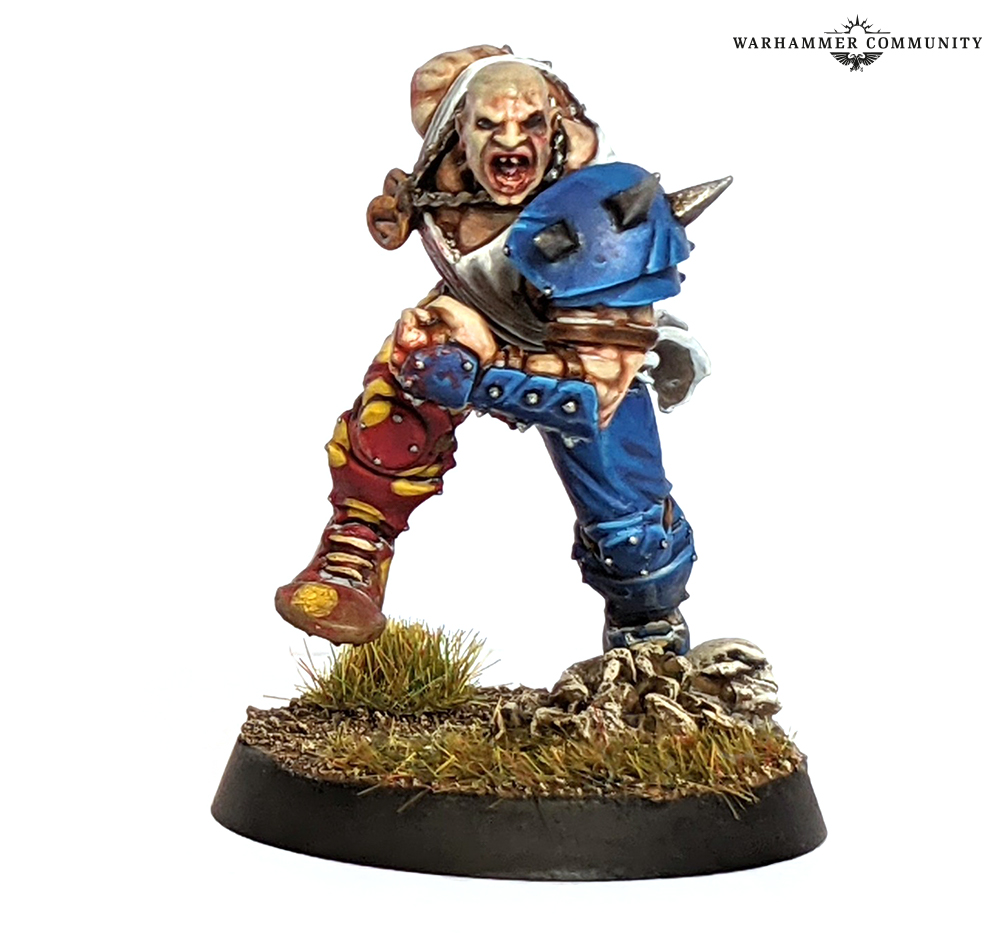 I found the lion’s head team icon and printed it onto white-backed decal paper using an inkjet printer, which I applied just after the base layer. That process allowed me to blend them in during the first layer stage, and it worked out really well. 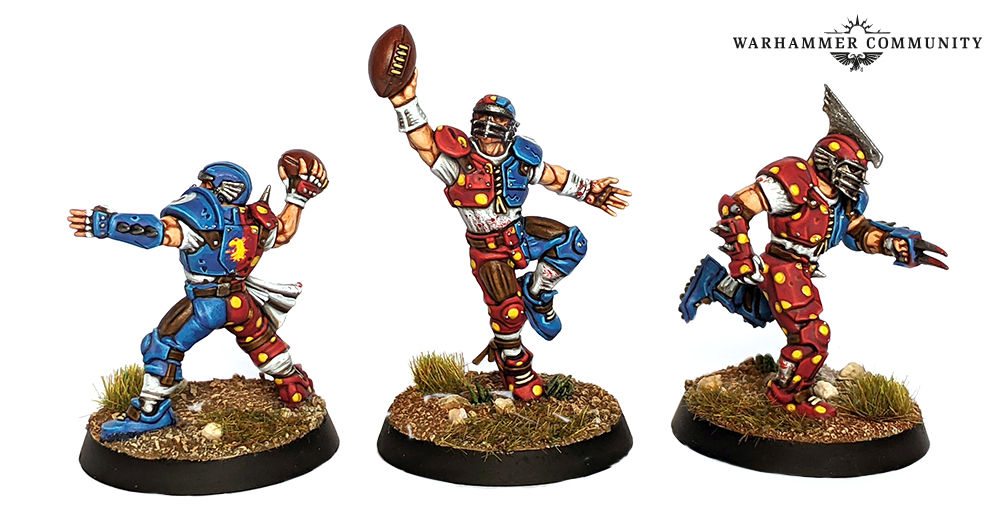 The Halfling was a fun challenge. He was donated by a friend, and he arrived without his right arm. I built a new one with a few leftover bits, like a Goblin hand and shoulder pad from the Blood Bowl Troll model, as well as a forearm from a Human Thrower, which I smoothed together with modelling putty. It makes him a little more unique. 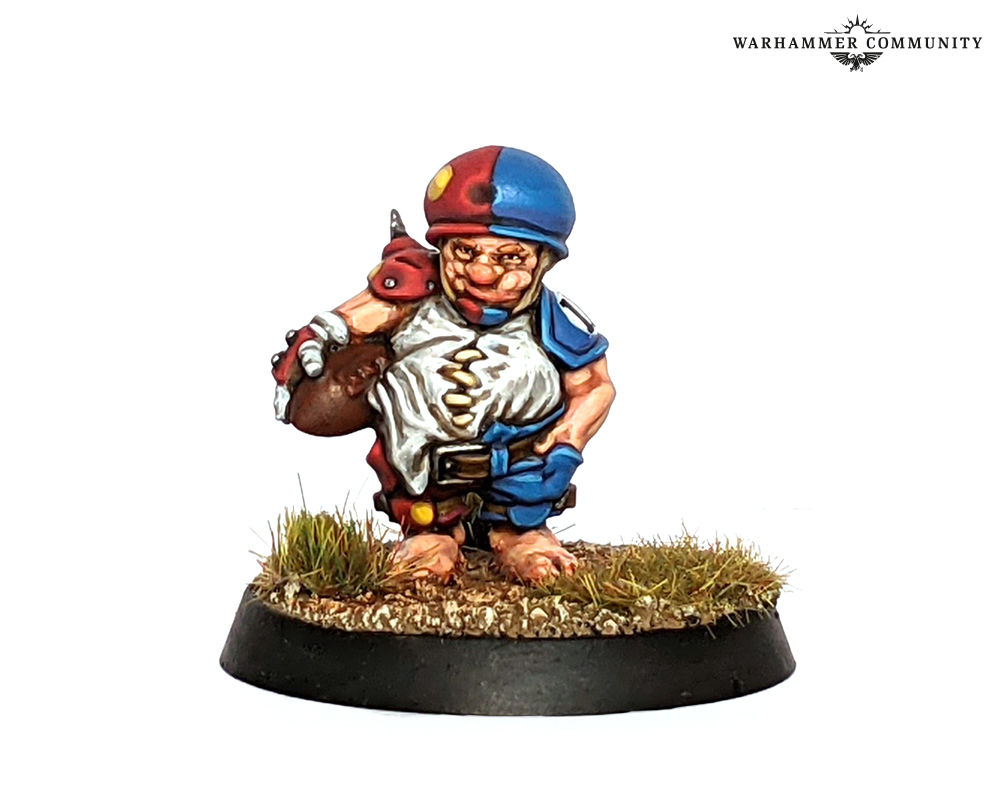 The team was complete, but it was missing something. The tokens!

Rather than going with the standard ones, I imagined these guys playing in some Old World medieval fayre, and there was only one thing that popped into my head – banners.

Using the same lion’s head icon and my favourite image editing software, I printed them out before painting over them to intensify the colour. I freehanded the lettering on the scrolls to finish them off. 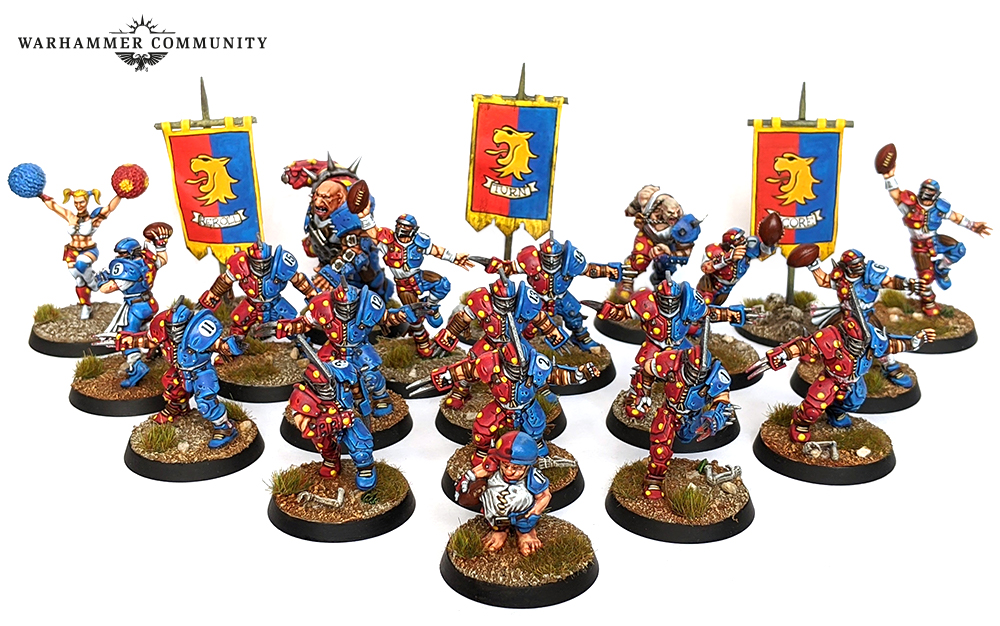 So far, I’ve had mixed results with the team on the field, with a 50% win rate. I did take home a “Best Painted Team” title from an event, so I’m happy with that.

I’ve thoroughly enjoyed bringing the Albion Wanderers to life, using an old school paint scheme on up-to-date models. Many thanks to all those who gave me input during the process and helped them turn out so well.

Colour us impressed, Hugo. This team is a joy for old-school fans and new ones alike, with colours that look absolutely stunning. If you’re inspired to push the envelope with a wild scheme of your own, the Human Blood Bowl Team is a fantastic place to start.

And if you haven’t set foot on a pitch quite yet, the Blood Bowl Second Season Edition boxed set gives you everything you need to get started, including two teams. Knock yourself out! Or better, knock your opponent out…

** If you’re not familiar, ‘batch painting’ is the process of painting a number of models at once, i.e. basing all the reds for all the models in one go, then looping back and painting all the blue, etc. By the time you’re done with the last model, the first one is usually dry and ready for the next step, speeding up the whole process.

See what you’ll be able to pre-order next week for Warhammer 40,000 and Blood Bowl.

Join us as we take a peek between the covers of the new Blood Bowl rulebook to show you some of our favourite bits of artwork!

A new starter set for Necromunda, and the Bonesplitterz arriving in Direchasm? It’s going to be a good week.