In between designing massive piles of fantastic models, the Forge World studio team still manage to find the odd moment to do some hobby of their own. An avid fan of Necromunda, Luke Blick has been painting miniatures and scenery for a while now, and he’s here to take us through how he painted his Gang Stronghold. 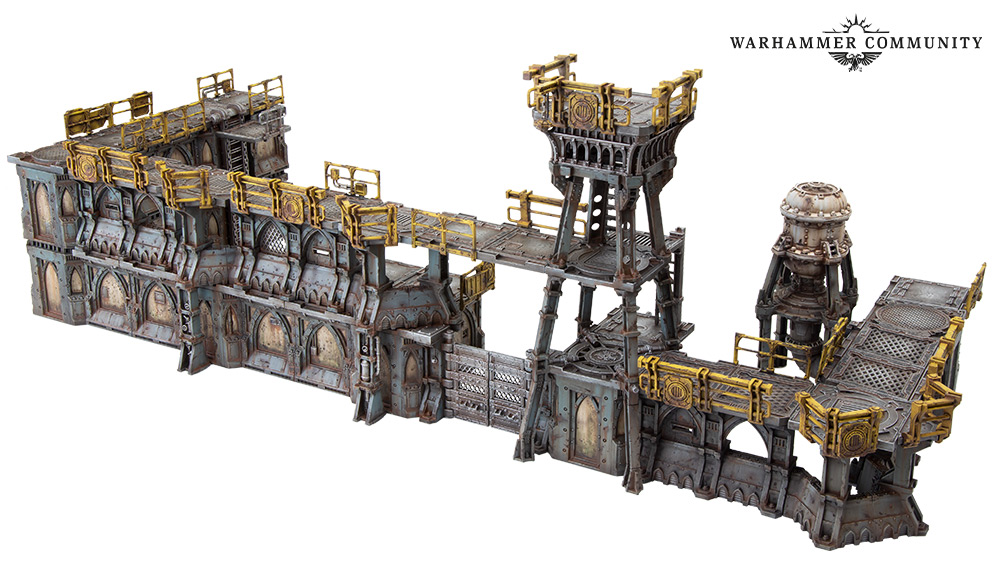 Imagine having to get past all of this – the tall walls are particularly intimidating.

Luke: I’ve been a member of the Forge World design studio for a little over five years now, working on most of the studio’s projects, such as The Horus Heresy, Blood Bowl, and Necromunda. Now I’m a Model Designer for the Middle-earth Strategy Battle Game, but before that I’d been a hobbyist for around 20 years, so getting to work on the games I used to play is exciting.

Being a big Necromunda fan myself, I jumped at the opportunity to get my hands on one of the Gang Strongholds! This kit gives a great opportunity to build more of a base for your gang and add height to the terrain, such as by placing it atop some of the Zone Mortalis wall sections. This gives this section of wall a formidable appearance to oncoming attackers.

I wanted to paint this kit to look as though it wasn’t very well looked after, so I focused on the damage and grime buildup. Mechanicus Standard Grey was used for the main wall sections, and then I painted the concrete arched sections in Wraithbone to give it some contrast.

These sections then had various thinned washes applied to them – one Nuln Oil, one Agrax Earthshade, and one Biel-Tan Green – to give the impression of mould growing on the walls. All the gangways were then painted in Leadbelcher. 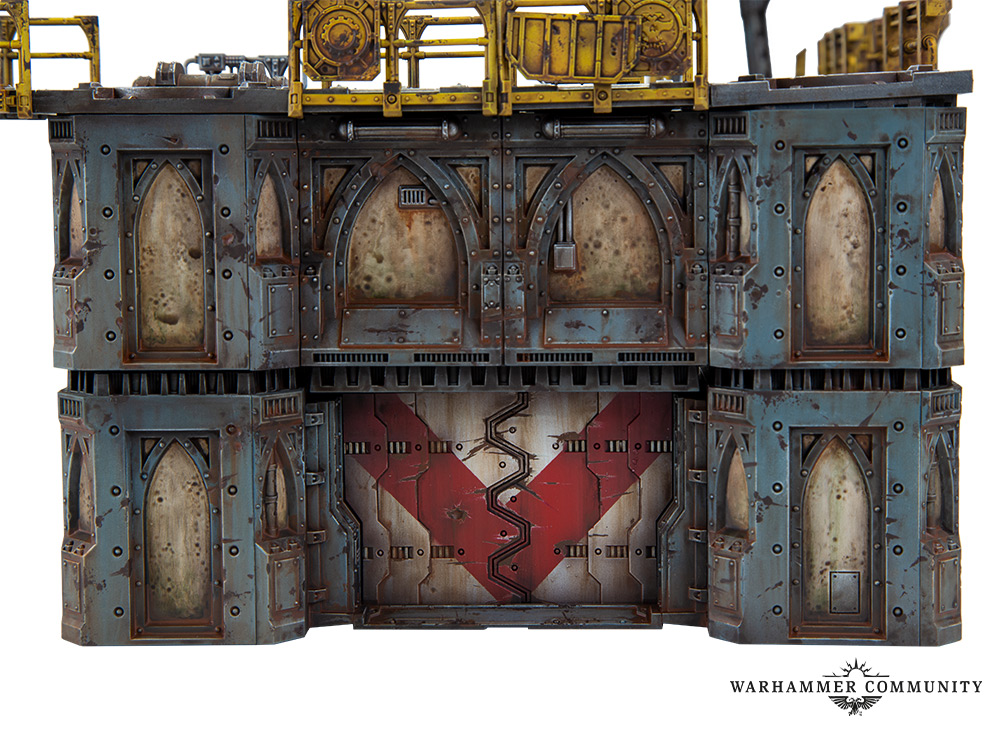 The blast door looks like it was built to stop something much more dangerous than underhive gangers.

Once all the base colours were added, I added damage by sponging or brushing the edges that would take general wear and tear, and focusing on areas of damage included in the sculpt. This was to give the impression of rusty metal below the grey paint layer. Once all was dry and weathered I went about drybrushing the metal gangways and other metal areas with Runefang Steel to add as much contrast as possible. 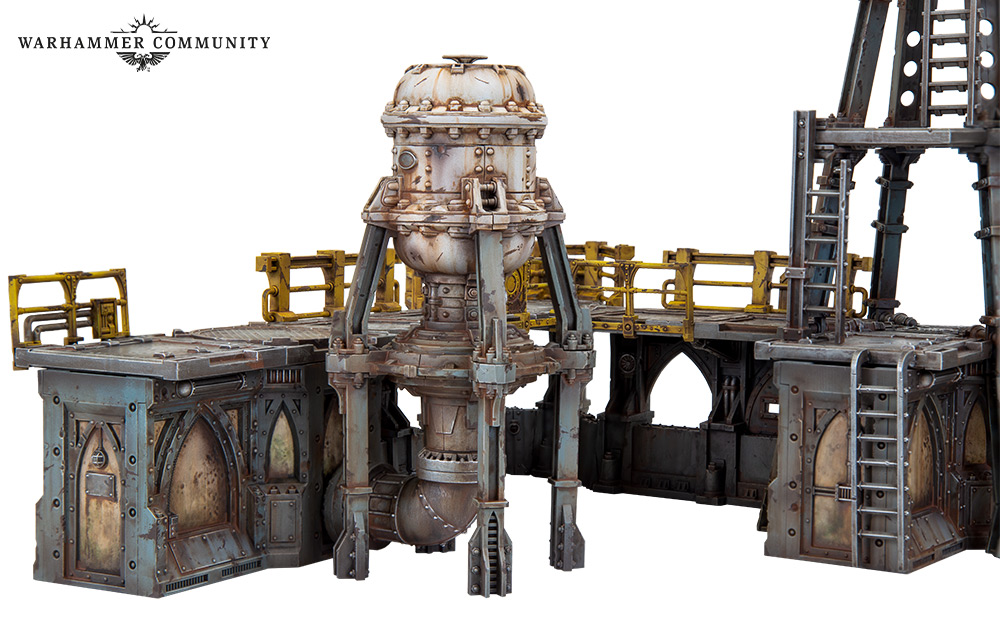 All that was left was to paint the railings, using my airbrush to basecoat these in Balor Brown before adding a little Phalanx Yellow from above to give them a sickly yellow feel. I then did the same weathering as before to help it all match. 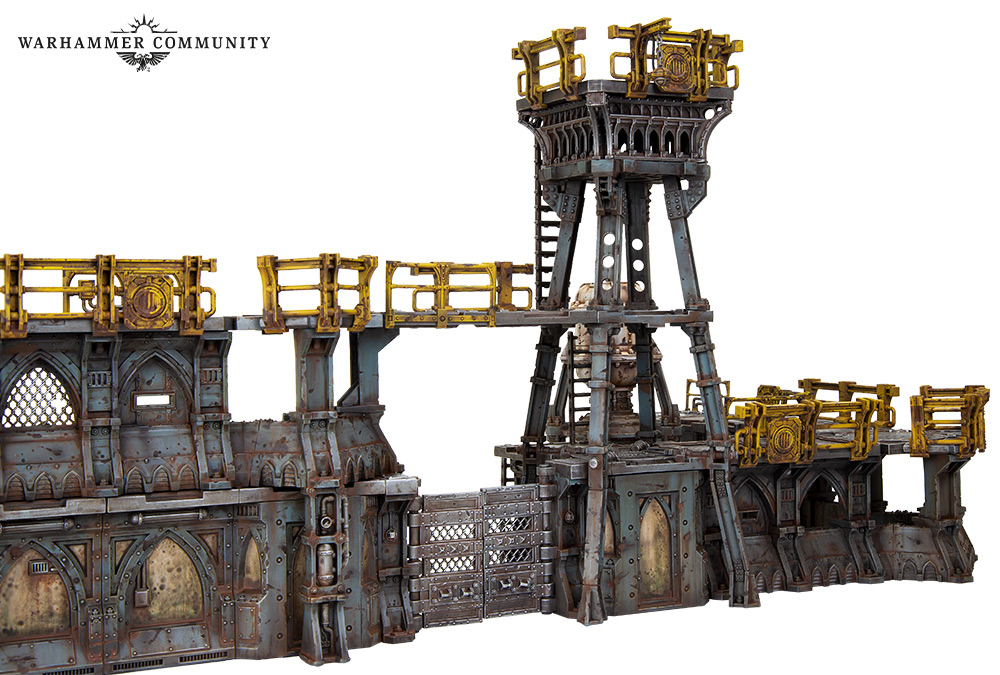 With a tower that high, it’s a good thing the railings are bright yellow so we don’t lose careless Juves in the night.

I’m very pleased with the way this kit ended up, appearing appropriately grimy and dirty. In time I’ll build on it to make it into a fully enclosed stronghold and add some more personal details to this section, like wanted posters on the walls or graffiti sprayed on the outer gates. You know, all the home comforts a gang member could want.

Have you picked up a Gang Stronghold for your own Necromunda gang? It’s also perfect for the new edition of Kill Team, along with Thermic Plasma Regulators and the classic Munitorum Armoured Containers.

Check out the new terrain on its way to the underhive.

Learn how to get the most out of the Gang Stronghold kit, straight from the designer.

Home Is Where the Harm Is

Want to make your Gang Stronghold look good enough for Lord Helmawr himself? Check out this painting guide.