Spilling the Beans: Discover the Secrets of Writing the Screenplays for Hammer and Bolter

If you tuned in to our Warhammer Animation Preview Online to find out all about the upcoming shows on Warhammer+, you’ll be aware of Hammer and Bolter.

Unlike many of the other animations that will soon be coming to Warhammer+, Hammer and Bolter is an anthology series that delves into the dark corners of Warhammer, presenting a multitude of different characters and factions. It kicks off with an entire season of Warhammer 40,000 shorts, and each episode offers a window into the grim darkness of the far future in all its bleak, dystopian glory. Don’t think for one moment that it’ll pull any punches, either – Hammer and Bolter is not for the faint-hearted! If it’s brutal action and merciless carnage you’re after, you won’t be disappointed. 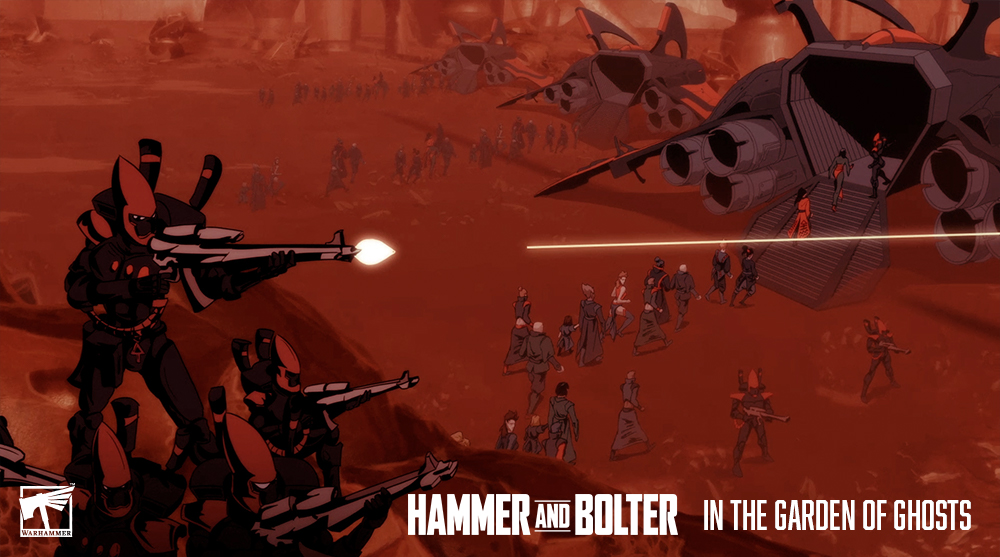 Something very exciting for Warhammer fans, is that this series has been penned by the Warhammer Storyforge team, which includes some of Black Library’s most popular authors. We recently managed to catch up with two of them to tell us more about what it was like to tell stories from the Warhammer universes in a new medium and from new perspectives.

Warhammer Community: What kind of stories can we expect from Hammer and Bolter?

John French: The defining feature of a Hammer and Bolter episode is that it shows you one of the many facets of Warhammer and will leave you with a sting of venom in its tail. The universes of Warhammer are huge. There’s an infinite number of characters, factions, stories, settings, and time periods. As such, there’s room for tragedy, horror, heroism, despair, humour, deceit, betrayal, murder, and salvation. Hammer and Bolter reflects that reality. We have stories set in the grinding lower levels of the Administratum, in the Ork-infested wastes of a war world, and yes, in the killing cold of Fenris. Similarly, we have stories about some of the most (in)famous characters of Warhammer – Commissar Yarrick, I’m looking at you – and about people who are some of the billions who will not be missed. Poor, poor, Adept Bole…

George Mann: We wanted to represent lots of the different textures of the Warhammer universes, as well as a host of different story types, to show off the breadth and range of these fantastic settings. The first ones may all be set in the grim darkness of the far future, but we’ll be exploring the wilds of the Mortal Realms soon as well. Everything from blood-soaked war stories, to horror stories, to tales of faith, coming-of-age, corruption, humour, and brutality. And we’re telling them from a range of different perspectives, too, so this isn’t all from the Imperium’s point of view by any means. Hammer and Bolter is an anthology show in the truest sense of the word: we’re going to run the gamut of highs and lows.

WarCom: How do you approach these scripts compared to writing a short story or novel?

George: It’s an entirely different proposition, more akin to an audio drama or comic script, although we’ve been sure to leverage all our combined years of storytelling experience when working out the plots and characters for every tale. The key thing to remember is that an animation script is, by its very nature, a collaboration – not just amongst the writers themselves, but also between the writers and the animators. The script is not being written as much for the end user as it is to help guide the animators and artists to visualise the story in the best possible way. Not to mention the amazing voice casts we’ve been able to bring to bear on the scripts, too! So, for me, that was the biggest difference – a short story or novel is a fairly solitary experience with a single voice, while an animated episode is the work of a team. 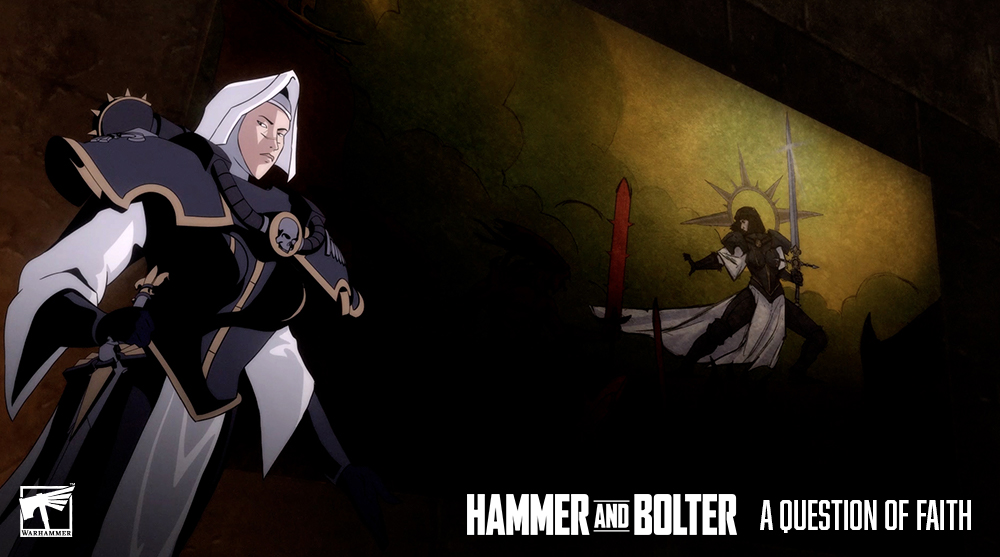 John: Short stories and novels let you expand on what is going on, and go into thoughts, hidden feelings, and how the characters see what’s happening. In a script, you only have two tools to tell the story: what the audience sees and what the characters say. That makes it very different. Every shot and word has to do a lot of work – it’s very concentrated storytelling.

WarCom: Are you able to tell stories in Hammer and Bolter you couldn’t in print?

George: Yes, absolutely! It’s key that you write for the medium you’re working in, and in this case it was an absolute joy to be able to write visually, thinking about ways to tell the story or get across plot points using images rather than words. I guess it’s a case of really leaning into that old adage ‘show, don’t tell’. That’s the fundamental difference between prose writing and screenwriting – you need to think about how it’s going to look as much as the words you’re putting into character’s mouths, and how those words, images, and the music and sound effects all interact.

John: Animation lets you do so much! Juxtaposing a conversation over a gaming board between Njal Stormcaller and Ulrik the Slayer with a Space Wolf aspirant coming face to face with a beast out on the ice floes, or have a Necron literally freeze time… well you can’t do that in the same way in print. 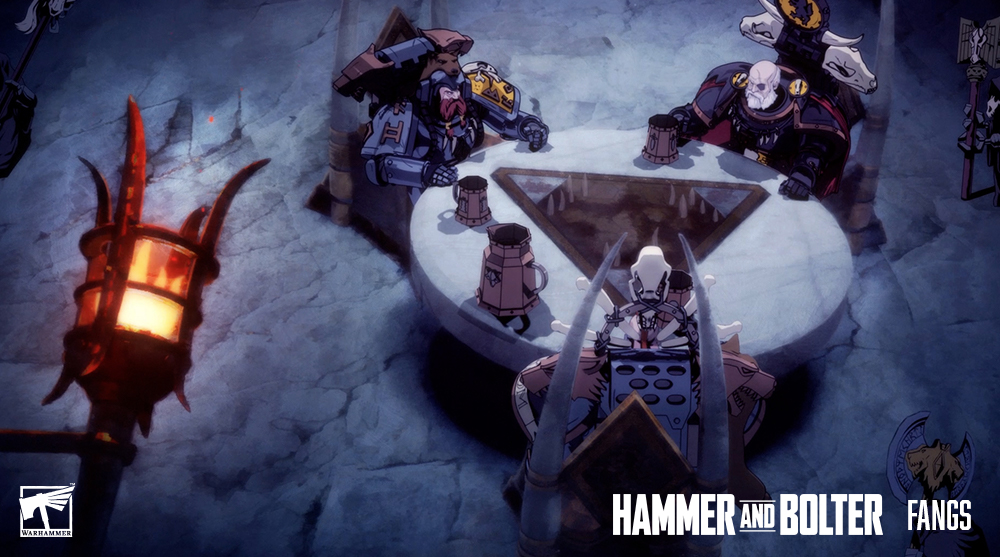 WarCom: Which is your favourite episode you’ve been involved in so far (spoiler free!)?

John: My favourite would have to be… Artefacts, or maybe…  No, I think I would have to say Kill Protocol. It’s an episode about a lone Techpriest and her Kastelan Robot crossing a war blasted wasteland in search of a lost piece of archeotech. The Adeptus Mechanicus is a part of Warhammer that I love, and seeing it on screen from imagining on the page was amazing. 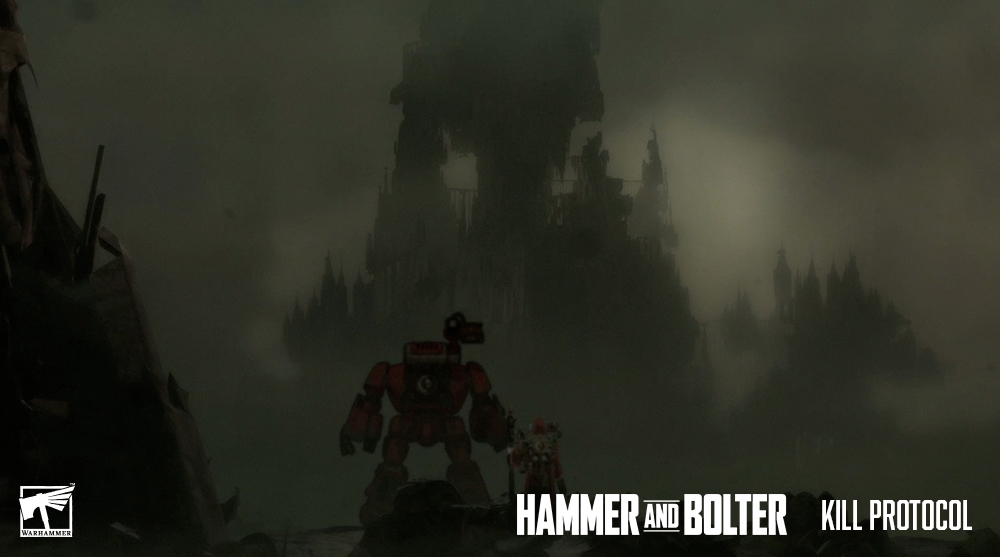 George: I’m a big fan of Bound for Greatness, the story of a lowly acolyte in a Librarium who starts to ask too many questions and gets an answer that he’s really not expecting… Or Cadia Stands, a look at the horror of trench warfare and what it means to be a Cadian in a universe where their homeworld has been utterly destroyed. To be honest, though – I think they’re all great! It’s a bit like asking me to choose between my favourite models… 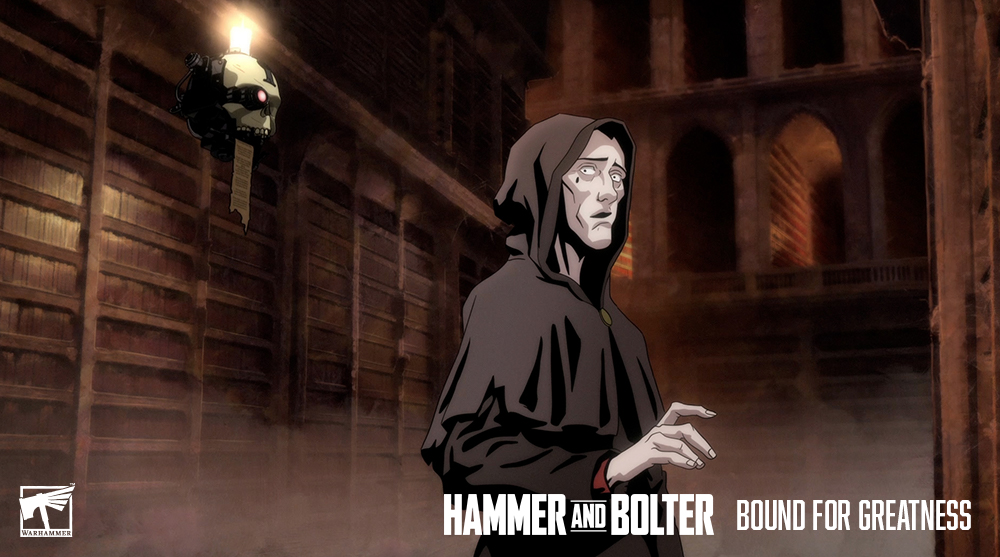 Thanks to both John and George for their insight. Hammer and Bolter is shaping up to be something very exciting for Warhammer fans of every stripe. To keep up to date with the latest news on Warhammer animations, subscribe to our animations newsletter so you’re always first to hear!

Of course, as we mentioned last week, Warhammer+ is far more than just the new home of all the upcoming animations… 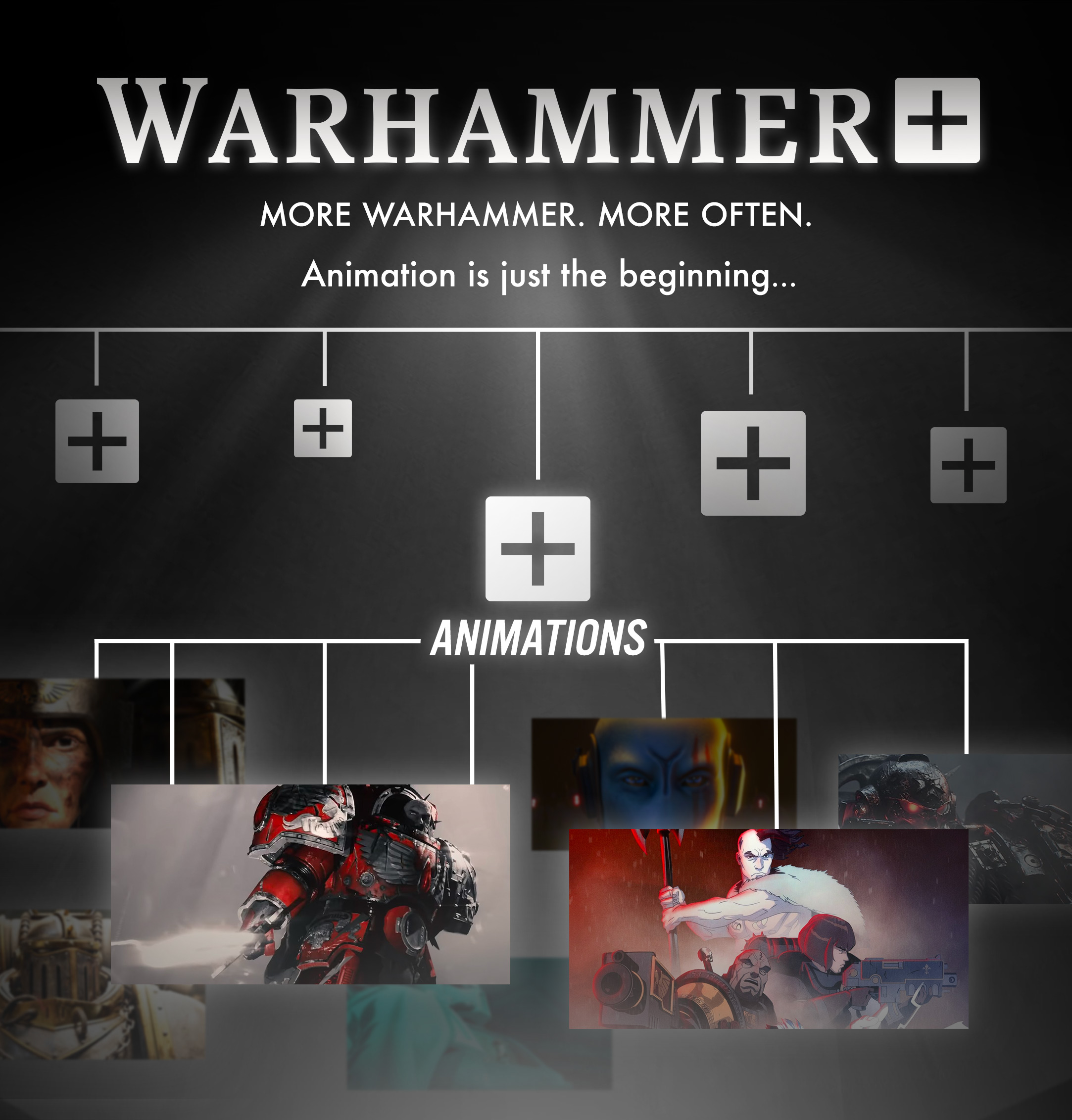 What’s more, we’ll soon be revealing more about what else you can look forward to on Warhammer+. All we’ll say for now, though, is make sure you’re free on the 23rd of June – we’ll see you then, to explain why Wednesdays are about to become your new favourite day of the week.

Hammer and Bolter – Spectacular New Screenshots From the Animated Anthology

Feast your eyes on gorgeous stills and intriguing episode titles from the animated series.

Brace yourself for the biggest Warhammer Animation preview so far, with news of loads of forthcoming shows, and how to watch them!

The Grand Reveal of Warhammer+ is Only Two Days Away

Get the low-down on everything coming to Warhammer+ in the next major preview.