Here’s How the Crimson Court Are Turning Enemies Into Appetisers

Led by the cunning Prince Duvalle, the vampire warband known as the Crimson Court found their way into the living mountain by chance, and they’re wasting no time sampling the buffet of prey inside. With both physical and magical power at their fingertips, the vampires are hell-bent on making Direchasm their newest and greatest hunting ground. 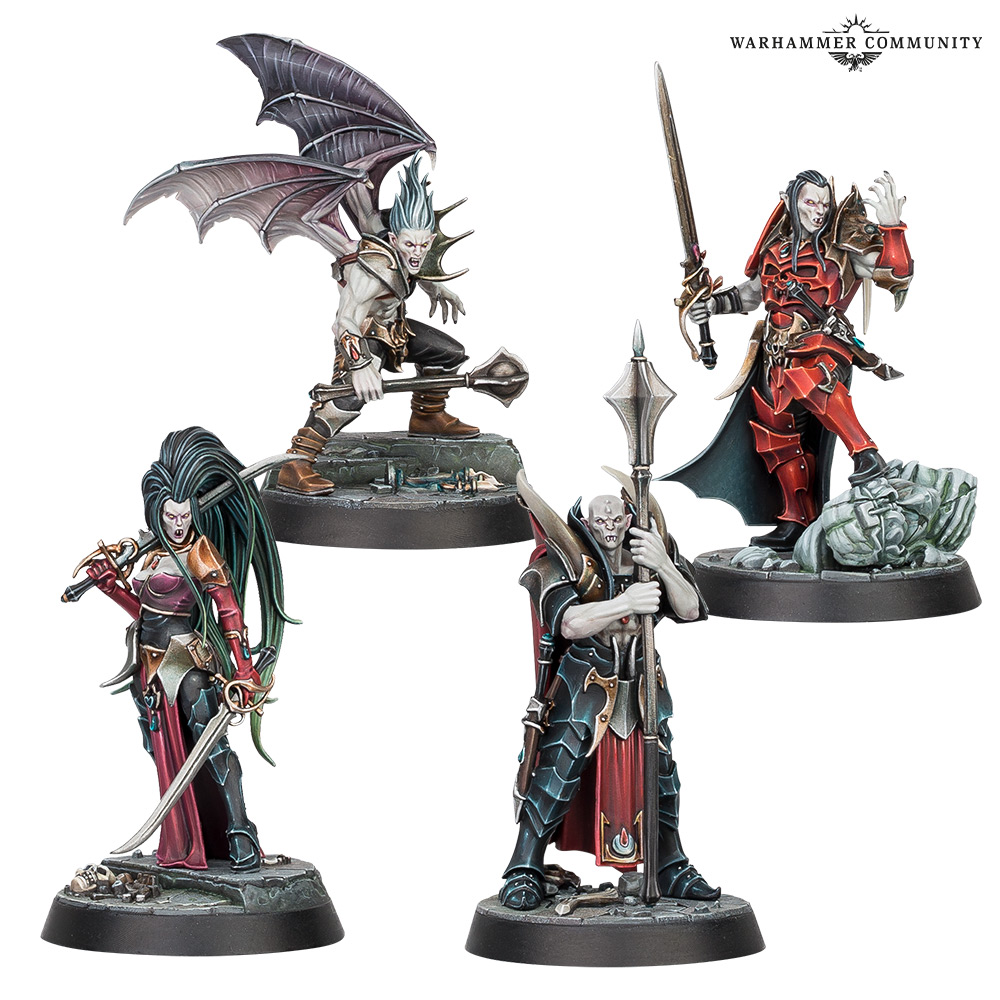 As we found out in January’s Warhammer Preview Online, the Crimson Court are an aggressive warband that must manage their unique mechanic, Bloodthirst, to excel on the battlefield.

While control of their Hunger brings special abilities and is required for Inspiration, the savage bloodlust that takes over, should their thirst run rampant, comes with its own benefits too. After all, a burst of murderous fury might be just what you need to crack open the walking bags of blood we call mortals. 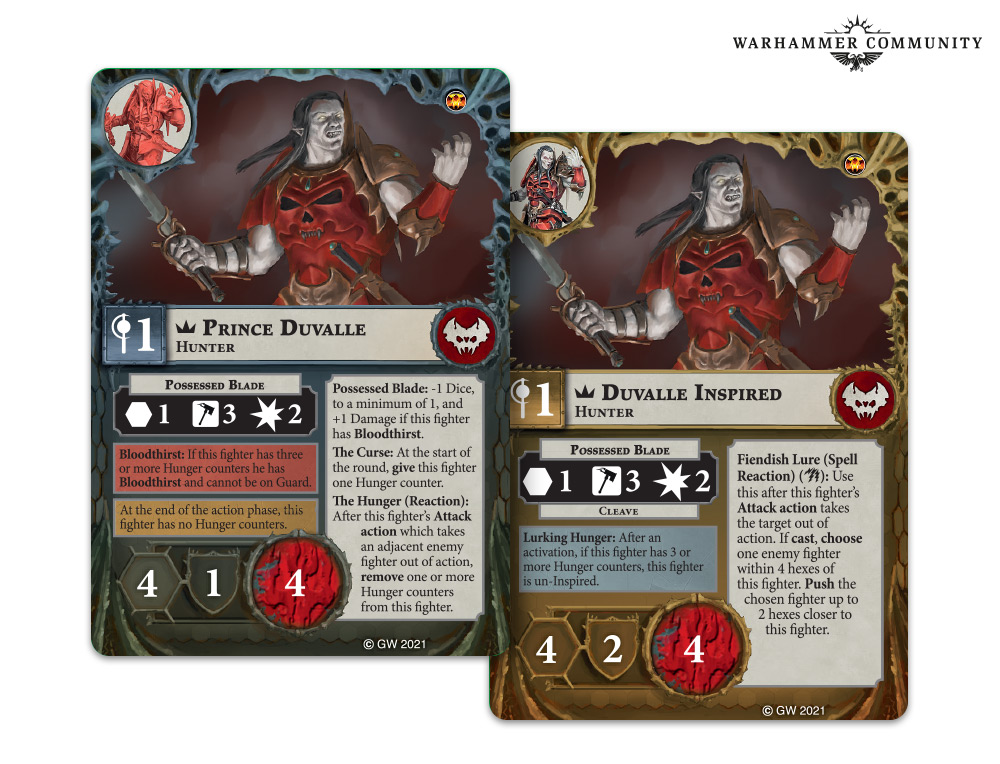 The Crimson Court’s leader is an excellent close-range fighter who does extra damage when affected by Bloodthirst. When he’s Inspired, he can use vampiric magic to coax enemy fighters closer to their doom. 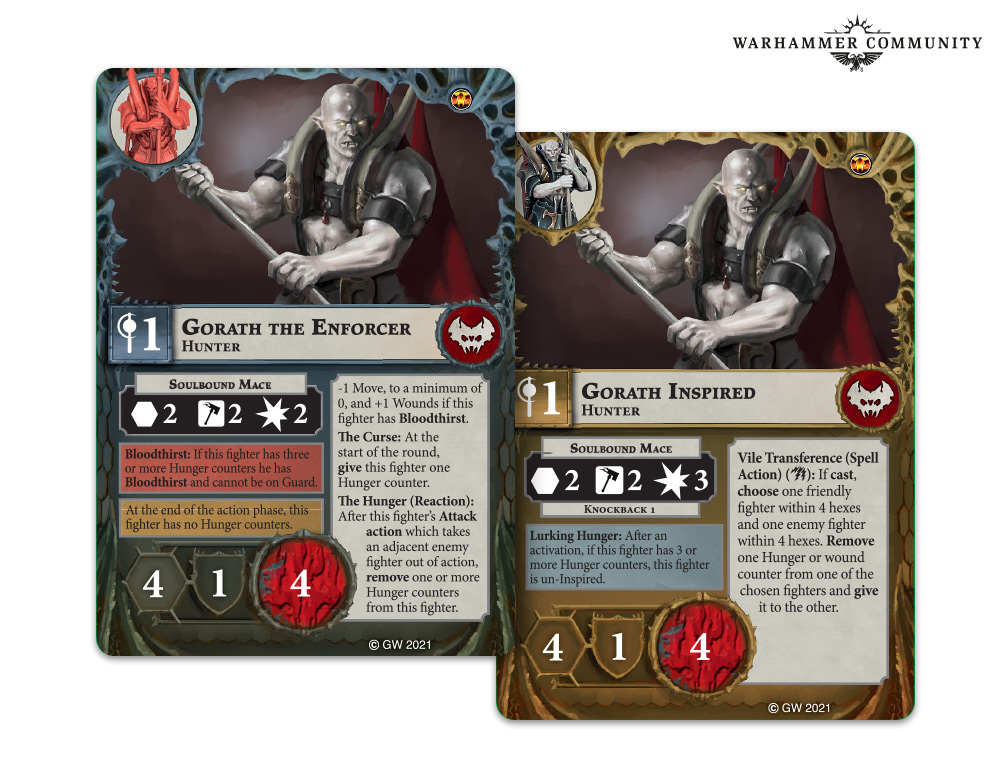 As Prince Duvalle’s right-hand man and an all-round reliable chap, Gorath expertly wields his soulbound mace and gets even tougher when the Bloodthirst overtakes him – although it does also make him rather slow. He might not look like a wizard, but he too can flex his arcane arts when Inspired, allowing him to transfer wounds and even Hunger counters between fighters. 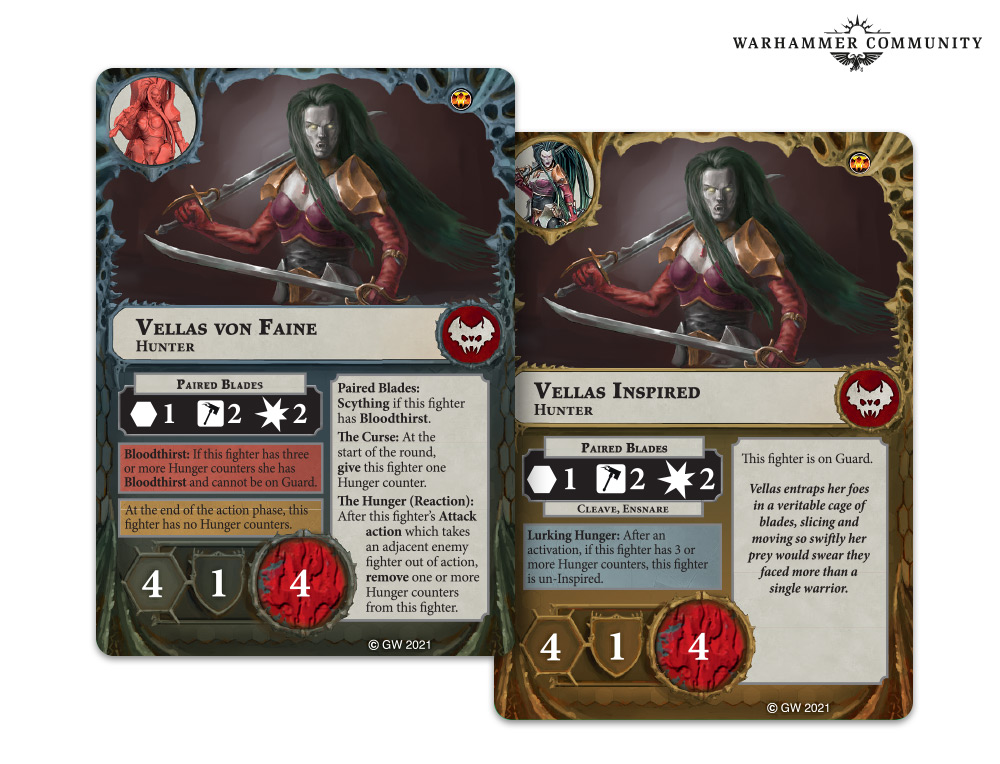 Vellas might not wield magic like her comrades, but she’s an exceptional duellist with her twin curved sabres. She becomes permanently on Guard while Inspired, as well as Cleaving and Ensnaring her foes for good measure. 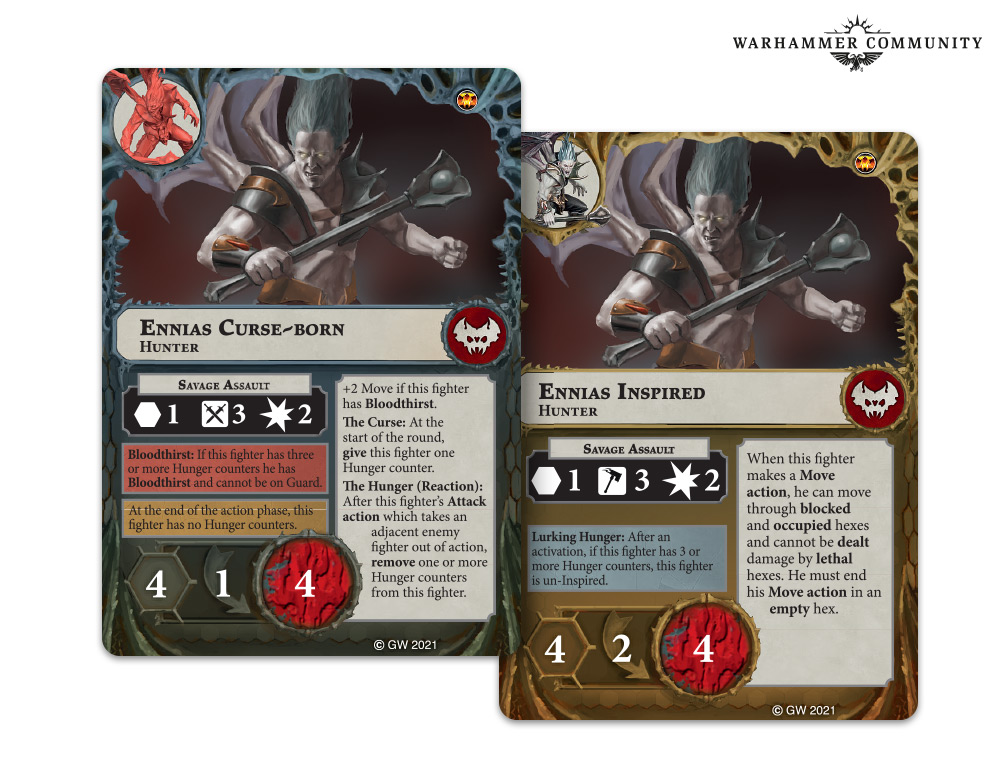 As the most savage and impulsive of the warband, Ennias takes flight while Inspired and can soar across enemy fighters and dangerous terrain alike. He’s quite capable of bashing in a few heads with his mace when he gets wherever he’s going, too.

Cards of the Cursed

Being an aggressive bunch of fighters, the Crimson Court has several objectives that take advantage of their overwhelming power. Best of all, with cards like Blood Curse, you’re rewarded for either killing a whole bunch of enemies or protecting your own fighters. 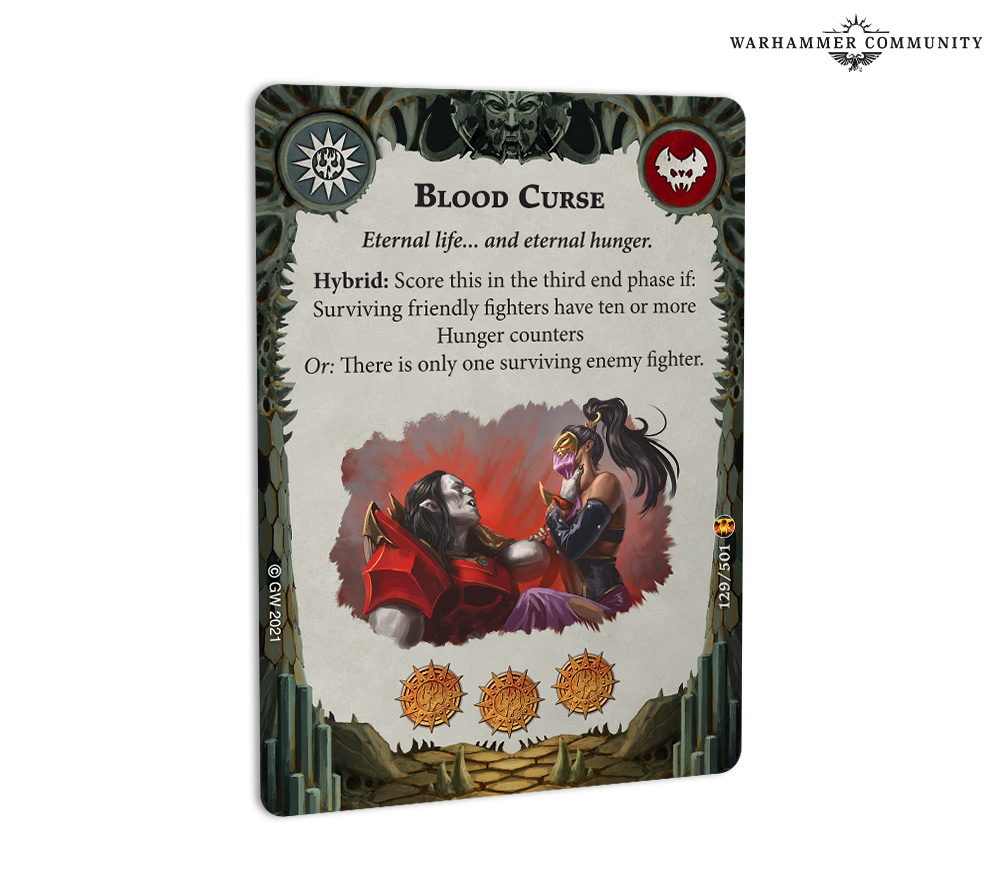 While enemy warbands might think they can sit safely out of the vampires’ reach and shower them in arrows, Gorath has other ideas. Thanks to Enforcer’s Cloak, bowmen and other ranged attackers might find they catch a mace around the chops much sooner than they were expecting. 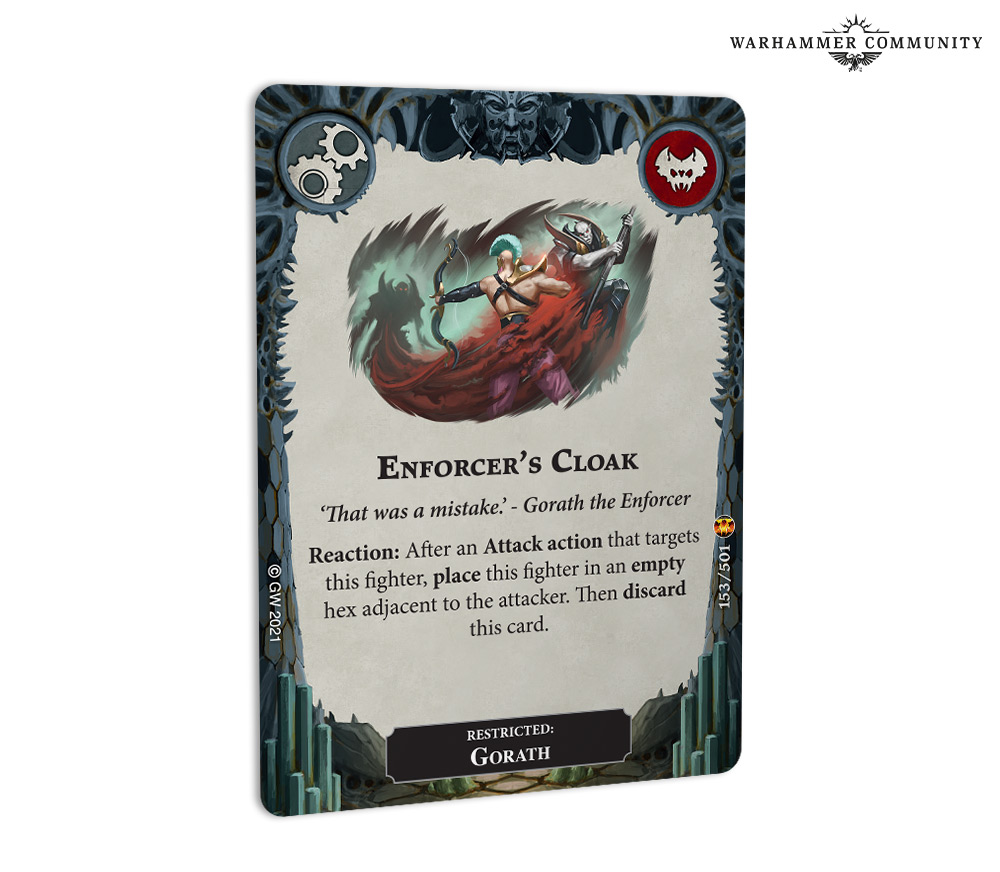 It takes a powerful, commanding presence to keep one vampire under your influence, let alone three. Luckily Prince Duvalle is an expert at manipulating his fellow hunters. Driven to Hunt, for instance, allows him to stoke their Bloodthirst or drive them towards their next meal, whichever serves his purposes better. 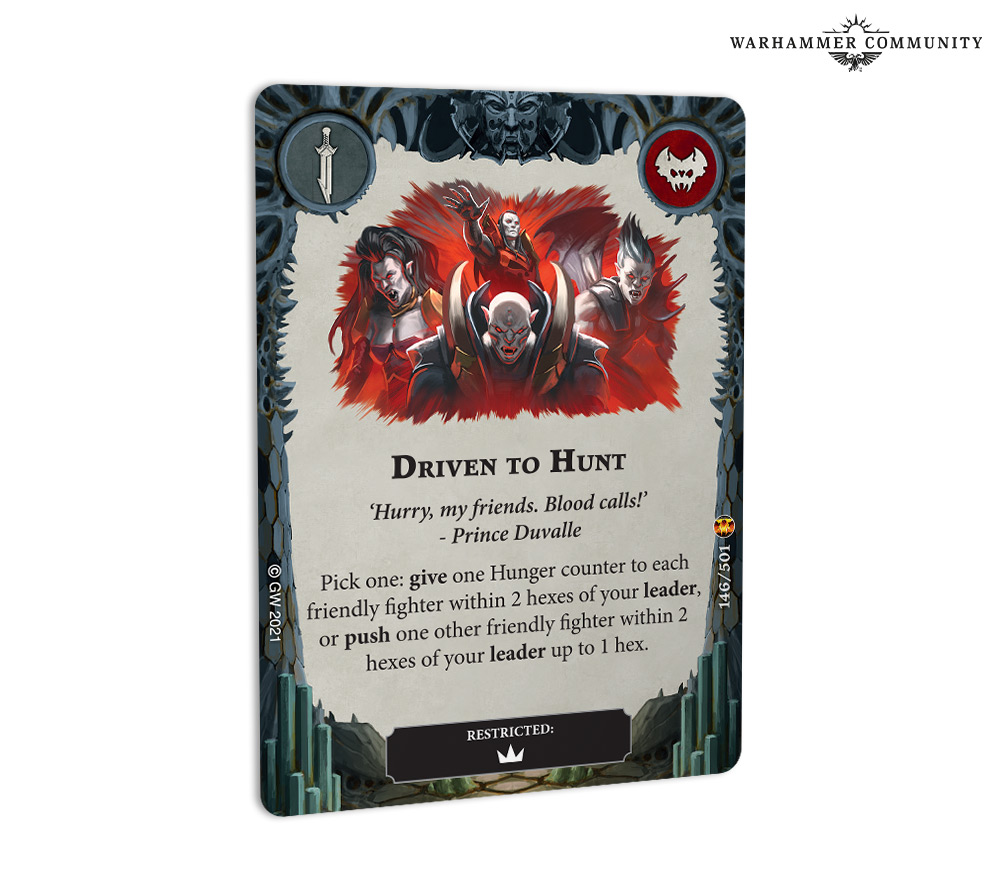 If ensorcelling your opponents’ fighters is more your style, Dark Glamour is a vampire classic. With a piercing gaze, the Crimson Court’s wizards can enrapture a foe and leave them staring blankly into space, unable to drag themselves away. 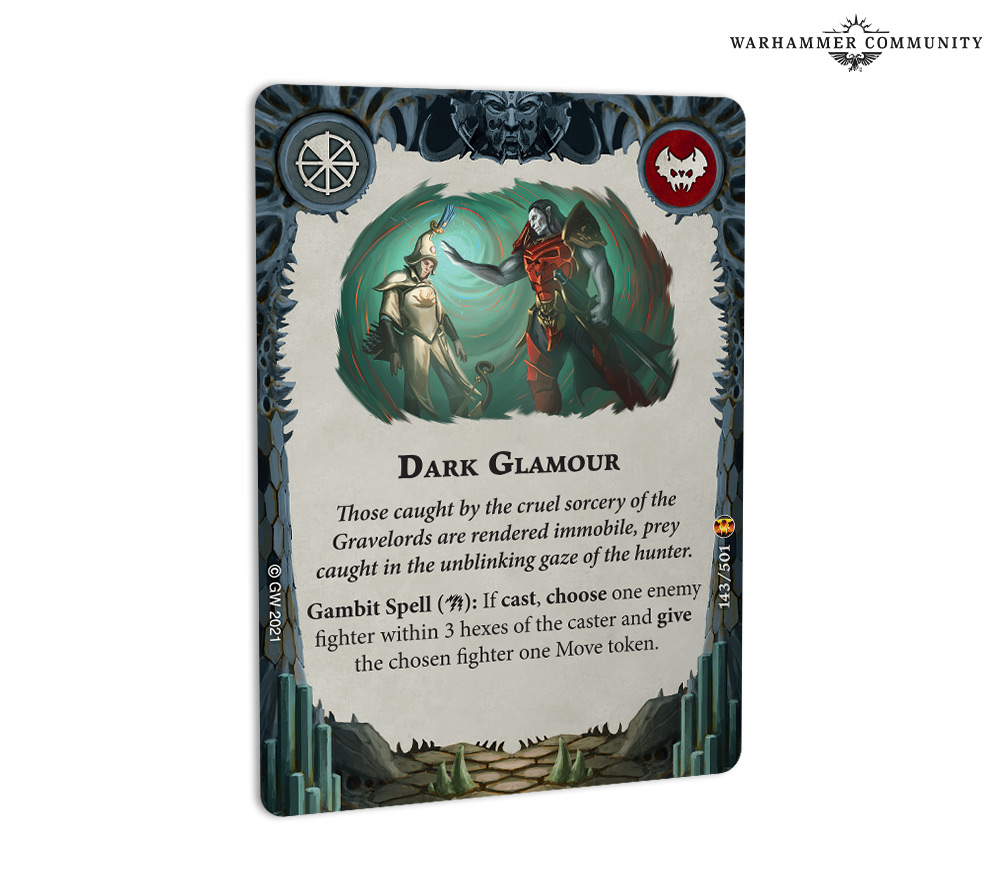 While those are some of our favourite cards in the Crimson Court set, they’re by no means the only ones in there. Have a look at every (yes, every) card you’ll be getting alongside the vampiric warband. 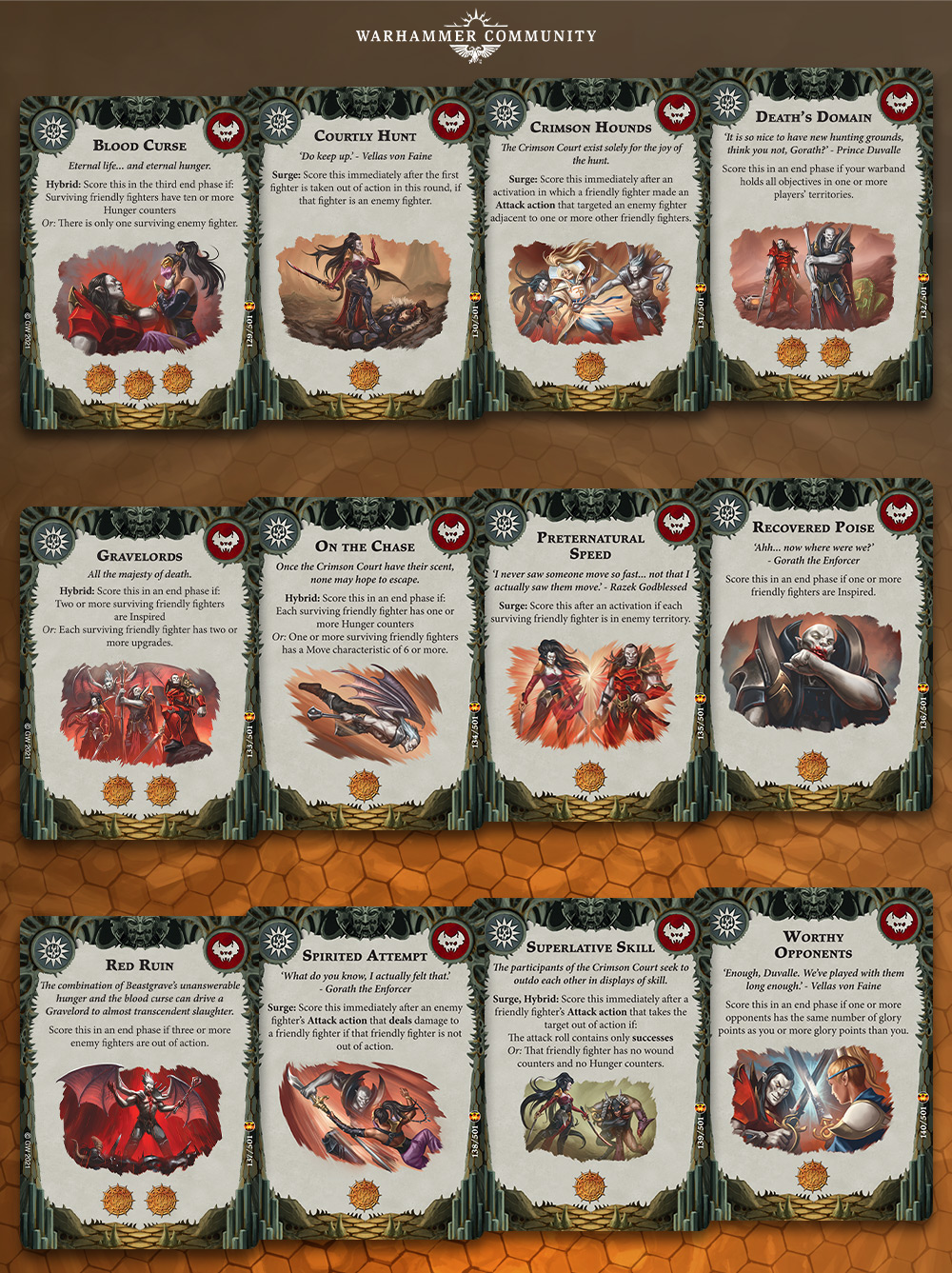 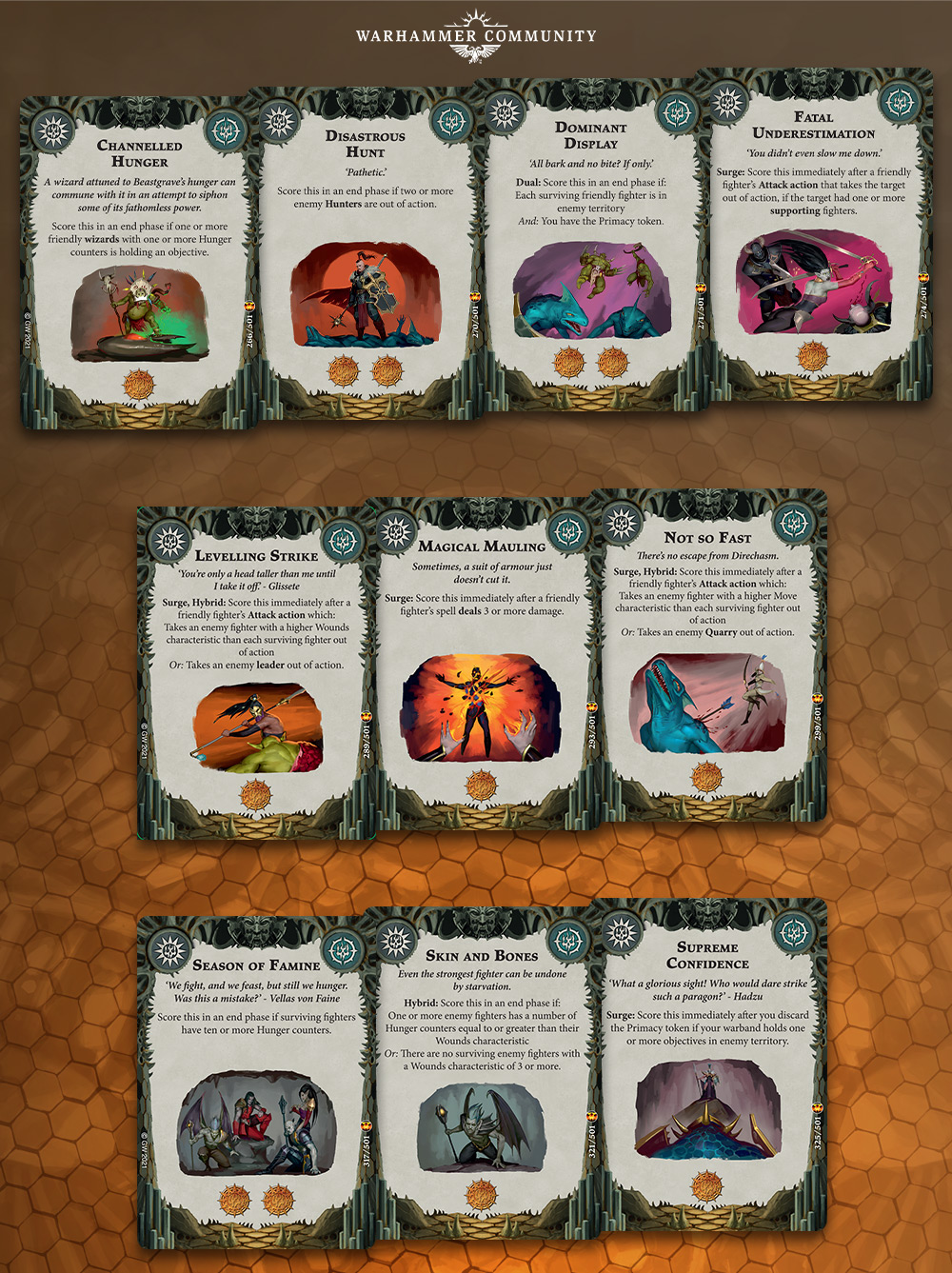 The Crimson Court is available to pre-order on Saturday, alongside the brand new Warhammer Underworlds Starter Set (keep an eye out tomorrow to learn more about that). There’s never been a better time to leap into the dark chasms of the living mountain – pick up the Direchasm boxed set and try out the world’s best deck-building miniatures game.

Meet the newest warband and check out the updated Warhammer Underworlds road map.