The Blood Angels on Crusade – Will you Fight the Black Rage or Embrace It? 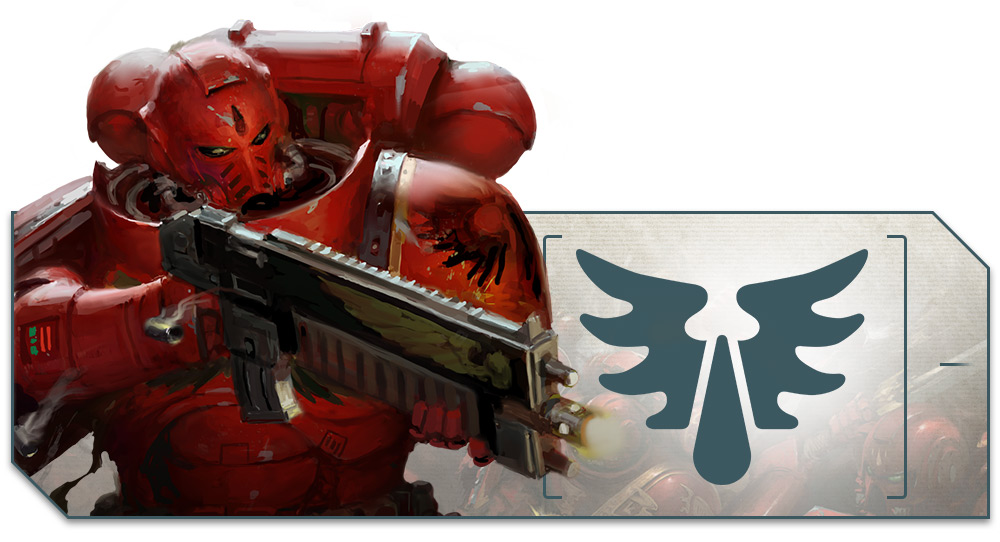 With their shiny codex supplement on the way this weekend, we’ve been taking a look at the new Blood Angels rules in the build-up to its launch. Today, it’s the turn of the narrative-driven Crusade rules, and at its beating heart is the effect of the Flaw. Let’s take a closer look.

As a narrative play campaign system, the Crusade rules fully embrace this hidden element of the Blood Angels’ nature – both its effects and their endless quest to find a cure for the affliction. In fact, the more blood they spill, the more likely they are to succumb to its effects, so you’ll need to keep track of how many Flaw points Blood Angels units accrue on their Crusade cards! 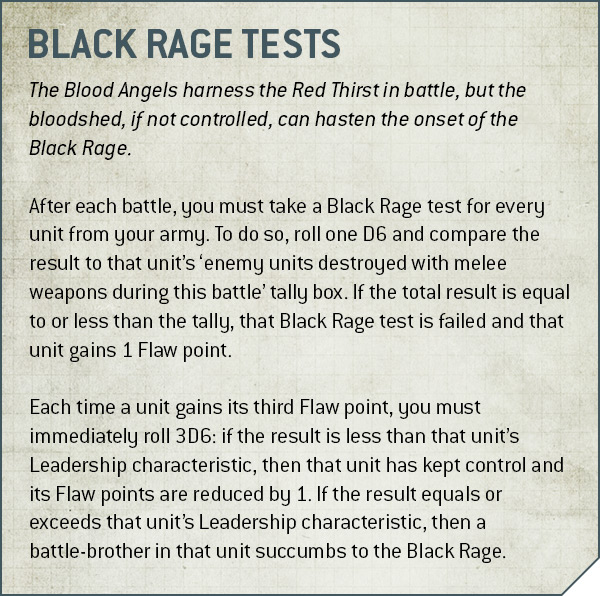 The effects of failing this test range from a Character or Dreadnought being consigned to the Death Company, to a unit losing experience points as some of their battle-brothers are lost to the Black Rage and replaced with fresh recruits. There are a lot more nuances to this than we have space to include here, but joining the Death Company certainly has its perks too! Death Company Marines and Intercessors, for example, no longer gain experience points, but nor will they ever fail Out of Action tests.

There are two ways to deal with this challenge – embrace the change as more and more of your units succumb to the Black Rage and join the Death Company, or try to resist its effects through canny use of… 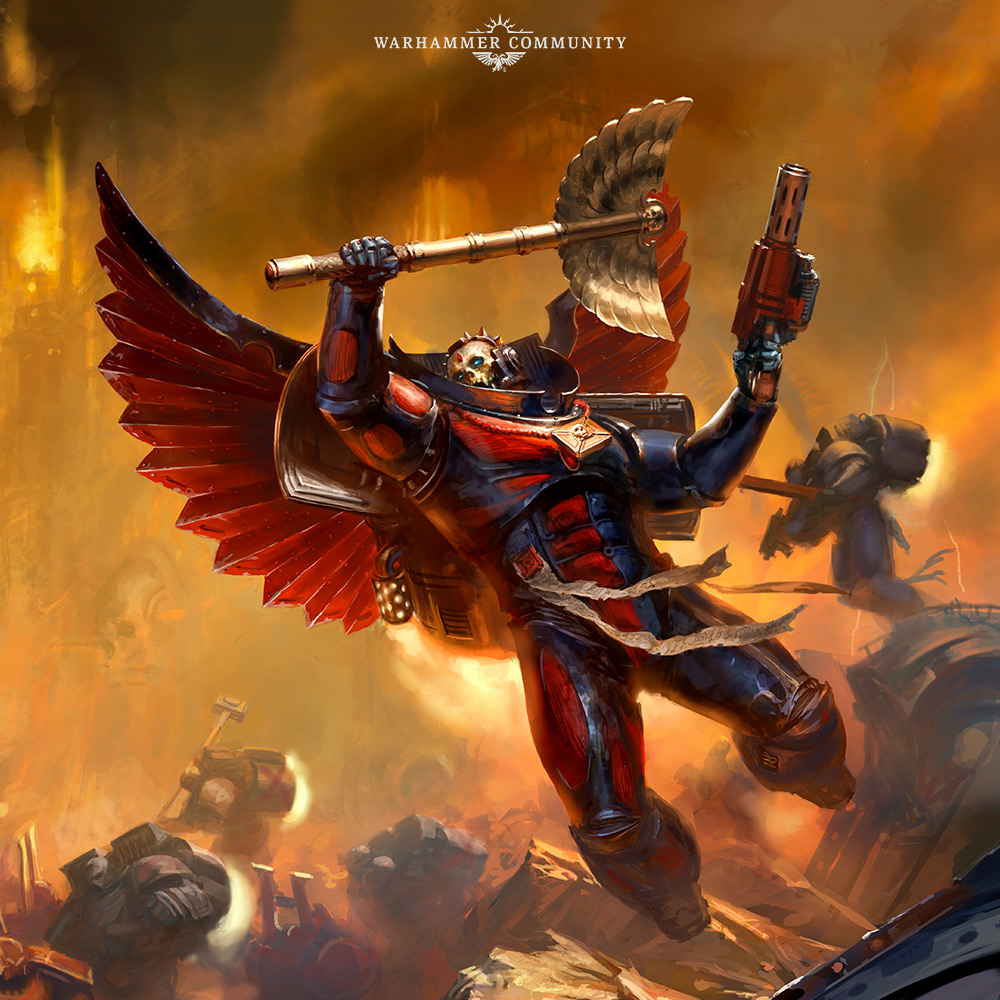 Two of the new Requisitions that you’ll have access to are excellent options when it comes to controlling the Flaw. Blood Angels Chaplains have always been an integral part of keeping the Flaw in check, so if you’re looking to fight its effects, make sure you upgrade at least one Chaplain with this Requisition as soon as you’re able. 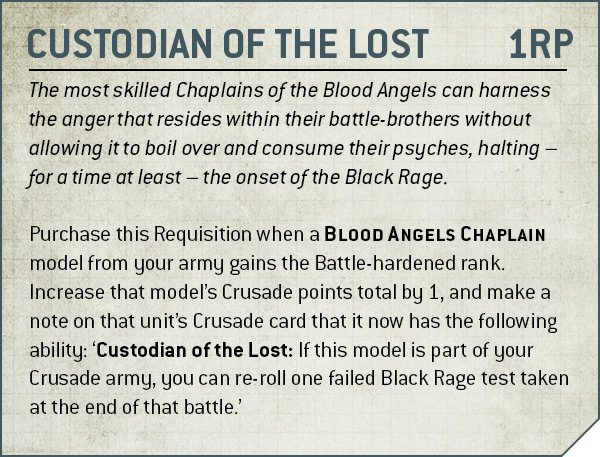 However, if your favourite unit is getting too near to the edge, this Requisition is your ticket to safety. 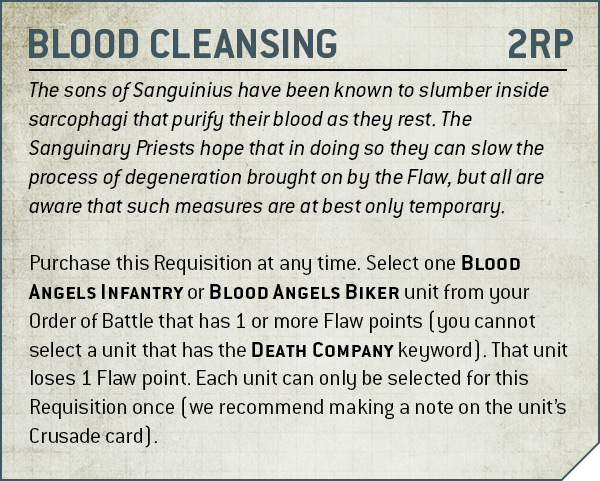 For that reason, you may want to consider keeping a few Requisition points spare should the need to use it arise. Of course, you can only fall back on this once per unit, so all the more reason to find a cure! 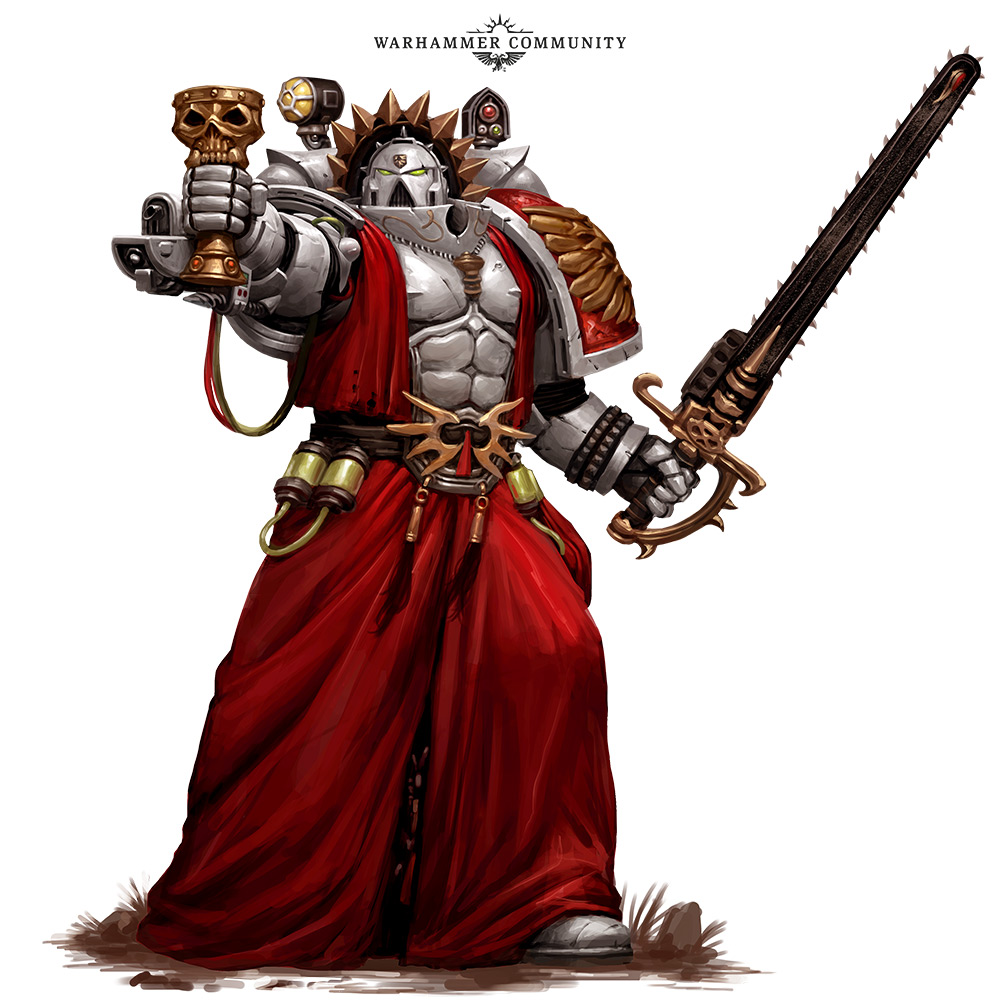 Speaking of which, if you’re looking to play to the narrative by searching for a cure to the Flaw, this Agenda represents it perfectly, as well as adding a fun challenge in the form of a ‘secondary objective’ of sorts to the mission you’re playing. 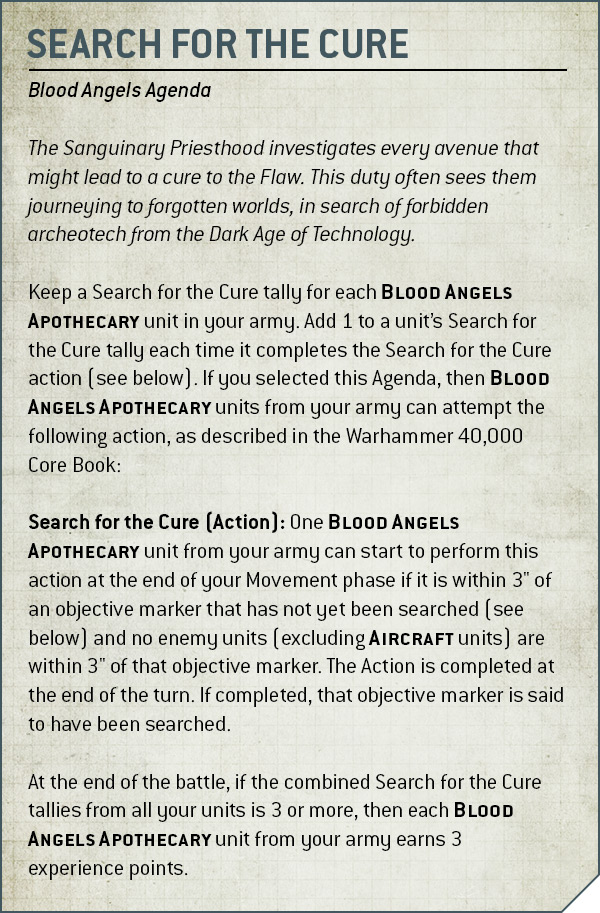 With 3 experience points on offer for each Blood Angels Apothecary involved, it’s also a great way to try and level up multiple Sanguinary Priests in one go.

There are no fewer than seven additional Crusade Relics that the Blood Angels can make use of. They range from the Hood of Baal – an excellent option for your Librarian of choice – all the way up to the Encarmine Warblade, first wielded by Chapter Master Raldoron during the Horus Heresy. However, a great early option for a melee-focused Character (of which, in the Blood Angels, there are many!), is this brutal Artificer Relic. 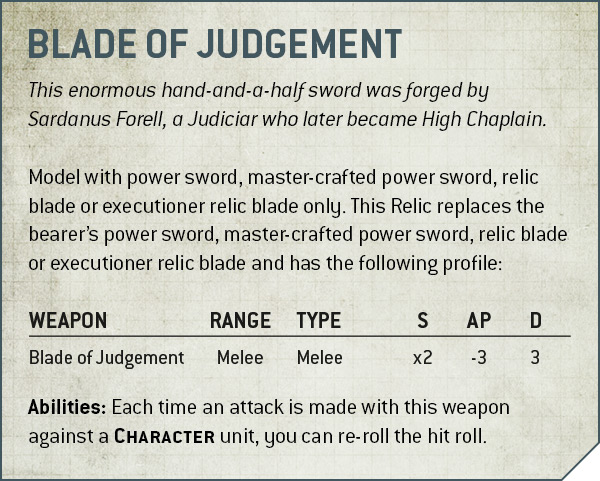 With this blade in hand, its wielder will turn into a full-on Character killer. 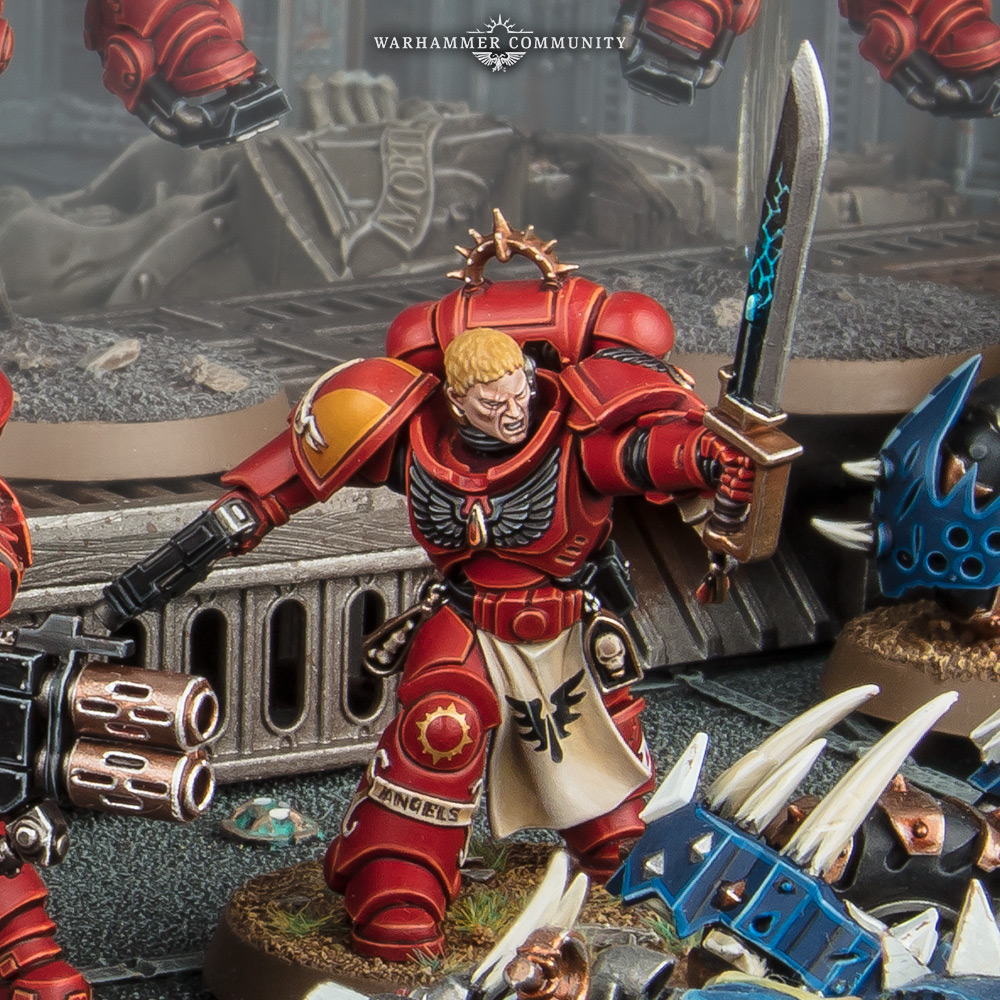 Despite being a Codex-compliant Chapter for the most part, the Blood Angels nonetheless maintain many traditions that are unique to the sons of Sanguinius. Among them are the Honorifics – such as Master of Sacrifice – that they bestow upon their Captains, which replace those found in Codex: Space Marines. 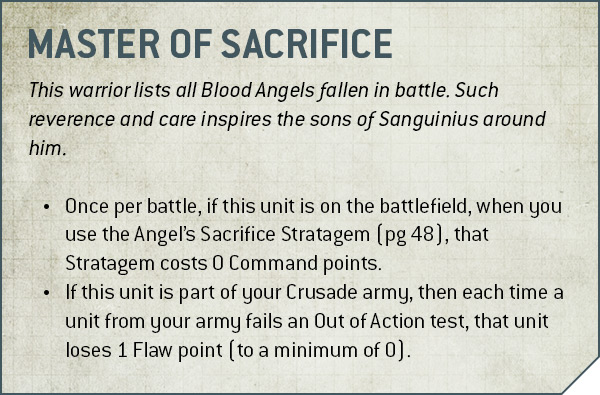 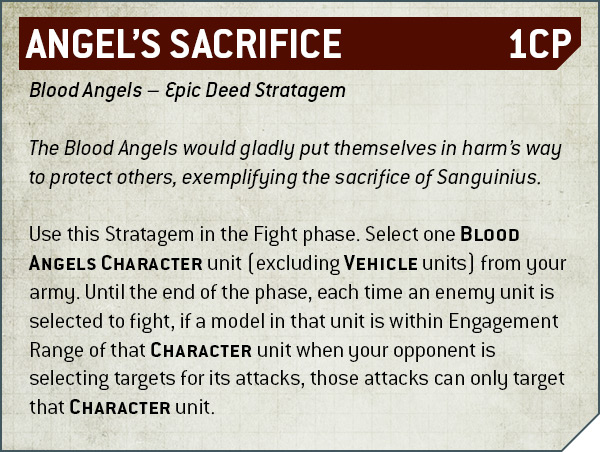 You can pre-order the new codex supplement this weekend, but in the meantime, watch out for our upcoming articles on the awesome Death Company and Flesh Tearers content also included in the book, and grab yourself a Chaplain to help keep the Flaw in check.

The Art of Your New Codex Supplements

Each new codex and supplement contains astonishing artwork showcasing the faction inside. Today, we’re taking a look at art from the latest books.

The Flaw Made Manifest – the Death Company on the Battlefield

Read about the rules for the Blood Angels Death Company in their new codex supplement.