Blood Bowl: Second Season Edition includes two great-looking new teams. We’ve already had a peek at the Thunder Valley Greenskins, so today we’re turning our eye to the Bögenhafen Barons and Imperial Nobility teams in general. Since they don’t have any Cabalvision highlights yet, we’ve put together a video about what makes them unique – take a look!

Even though they’re mostly composed of Human players, they play differently to a standard Human team. Let’s start with a look at the roster and then break down each position.

You’ll notice that rosters now have a tier on them. That’s because not all teams are created equal – you’d be surprised if a Halfling team beat a Dark Elf team without a lot of luck, for example. This means that new players who are looking for something more forgiving can select a tier 1 team that can easily recover from mistakes and mishaps. On the other hand, experienced coaches who want a challenge can try the tier 3 teams and revel in the glory of winning a game with a team like Snotlings! 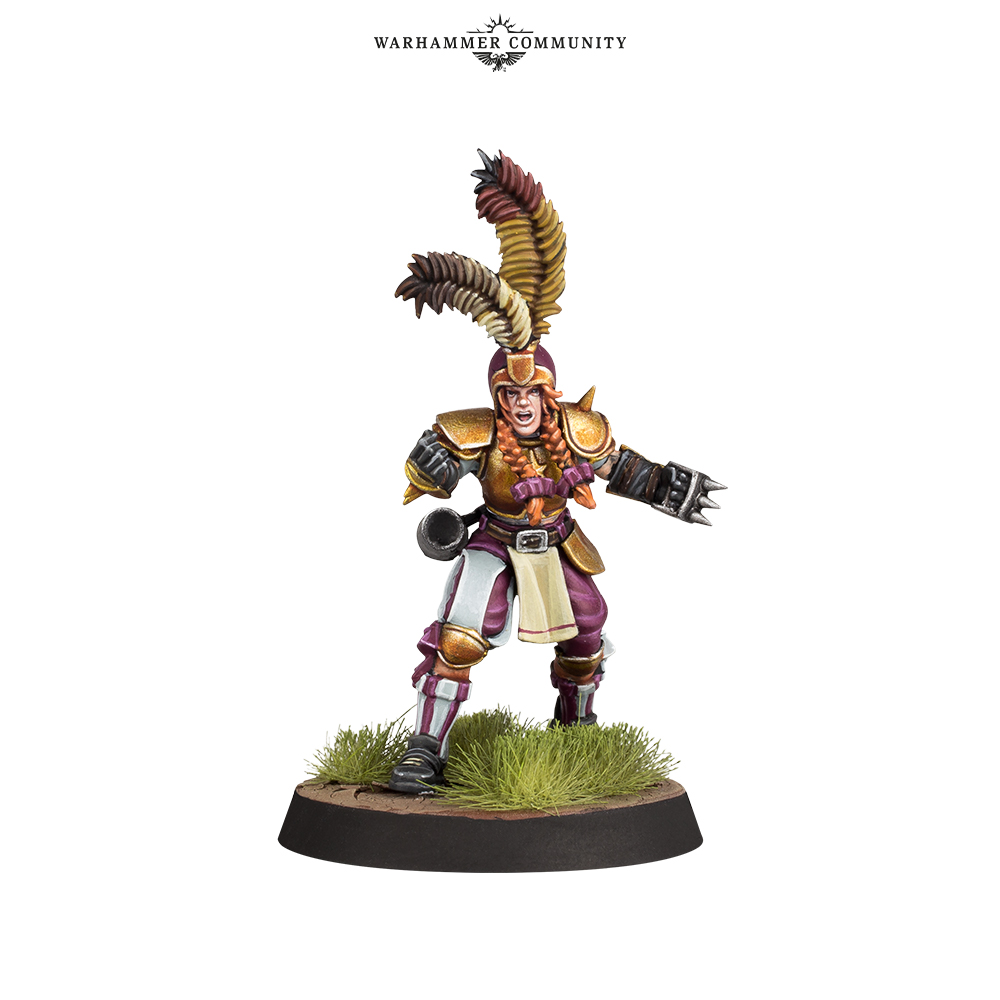 Linemen are your bread-and-butter players, able to fill out your Line of Scrimmage and do a decent job across the field. They really start to excel when they pick up some Skills though. Speaking of which, they all start with Fend. 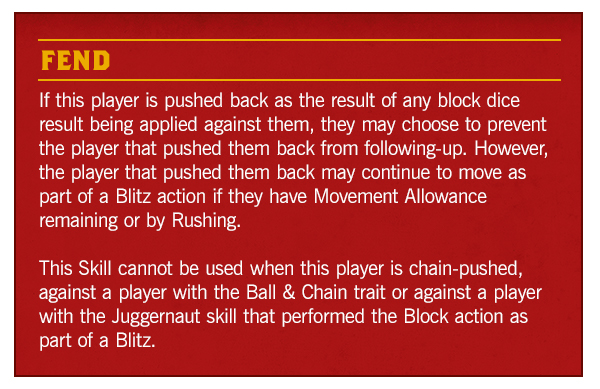 This useful Skill means you’ll be holding your line together with a little less heat on defence since your opponent will need to use a Blitz to get at you after you’re pushed back. 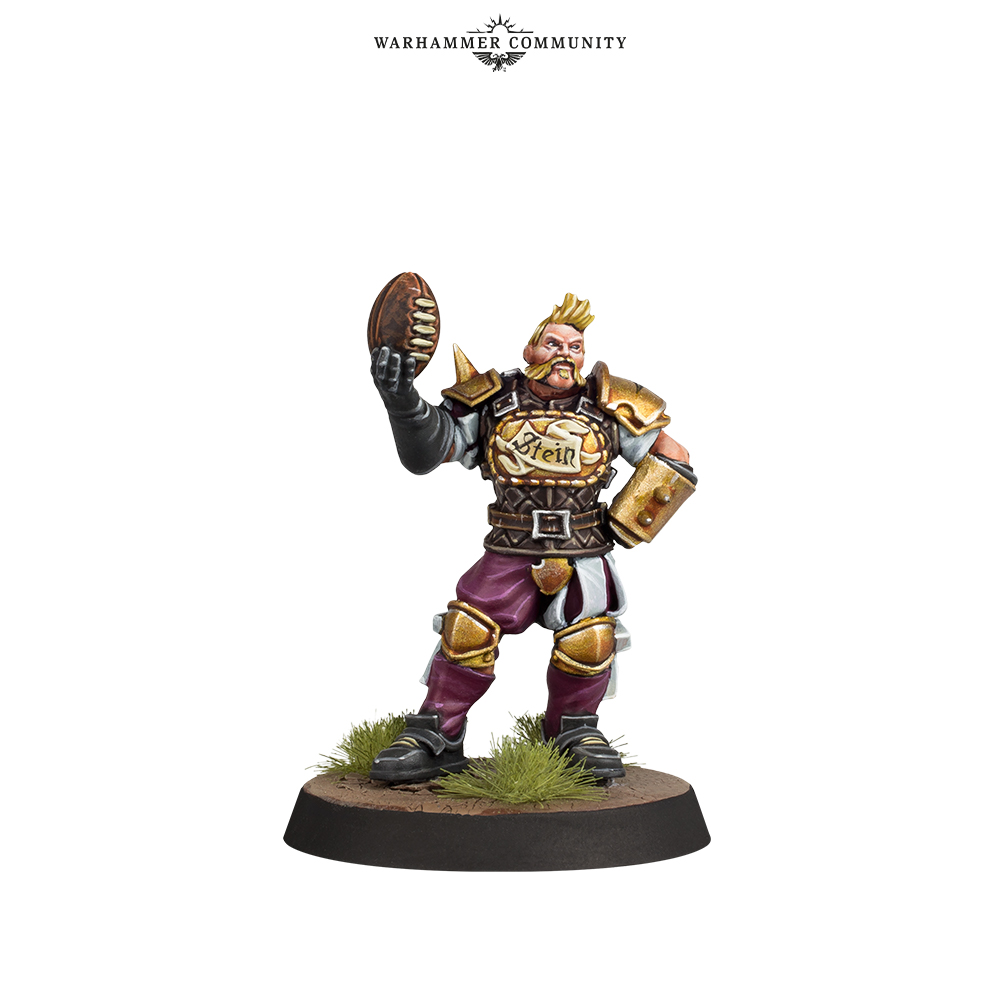 With both Pass (to re-roll a failed Passing Ability test) and Running Pass, these versatile players can set up complicated plays with ease.

Why not toss the ball to a Noble Blitzer, then move in to offer them an assist or run interference – classic move! Speaking of Blitzers… 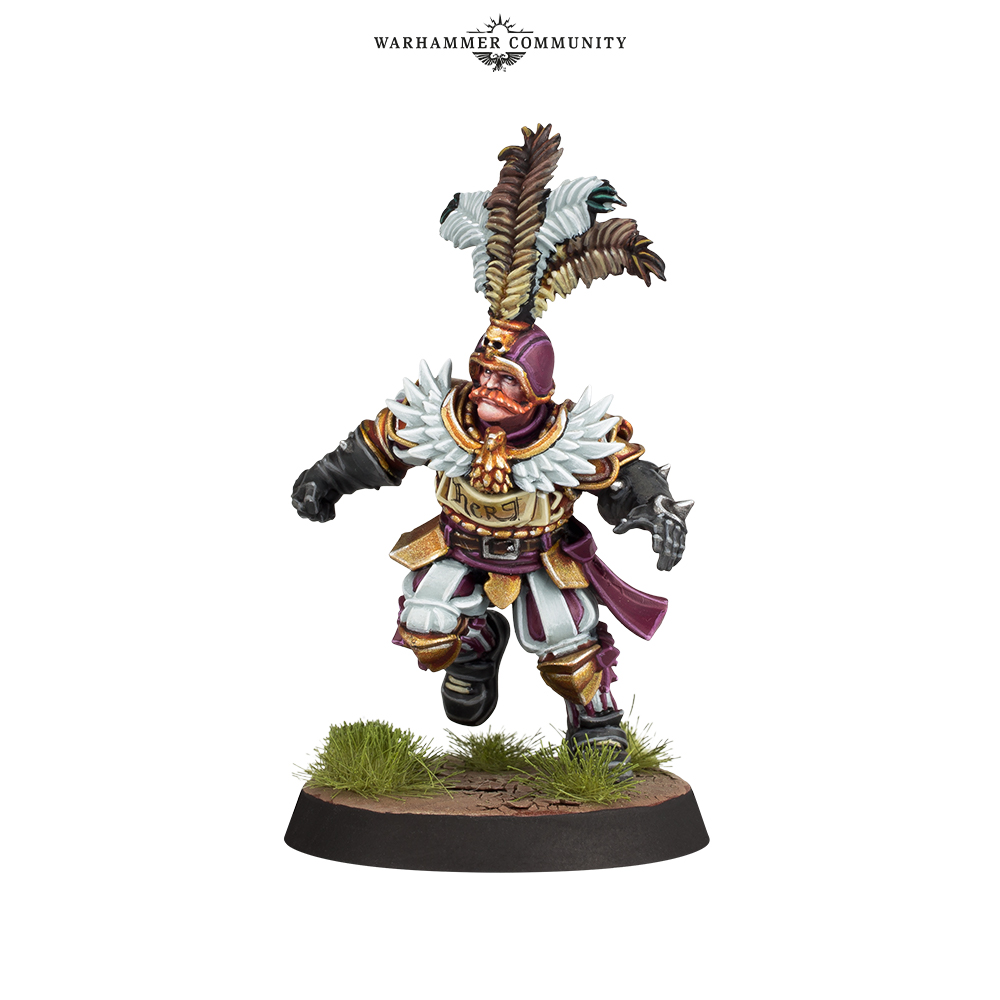 The Nobles like to show off, so they sent the Catchers home. Instead, their Blitzers come with both Block and Catch, making them crucial players on both sides of the ball. Punch a hole in the line, run through it, catch the ball, and score! Simple, right? Well, okay… maybe not so easy right away, but they’ll surely rack up loads of Star Player Points during your games. Once they get a few Skills under their belts, they become a force to be reckoned with. 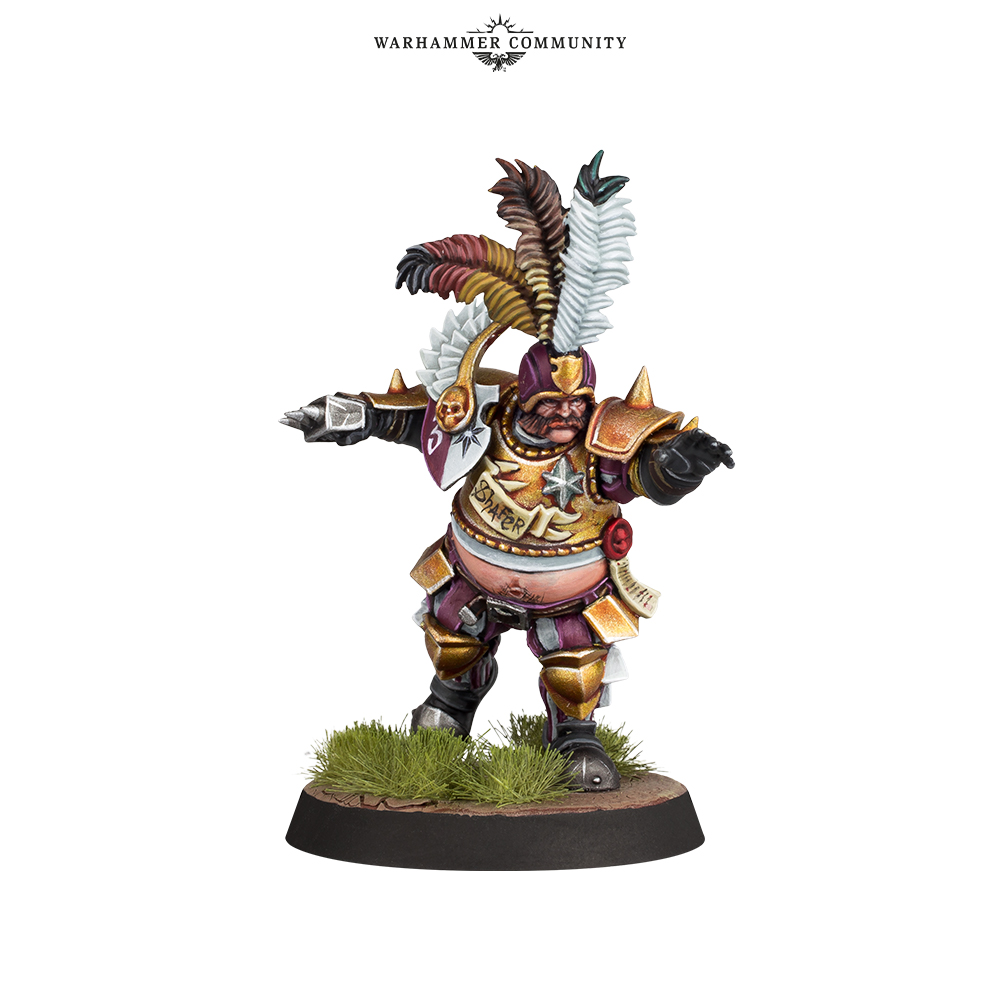 Completing the Human part of the roster are the Bodyguards. While your Linemen can fall back to safety, they are built to Stand Firm…

… and take their opponents down with them if they drop – without risking injury!

This combination of skills makes Bodyguards very tricky to deal with. They can effectively erase parts of the other team’s Line of Scrimmage, allowing your Blitzers to break through! 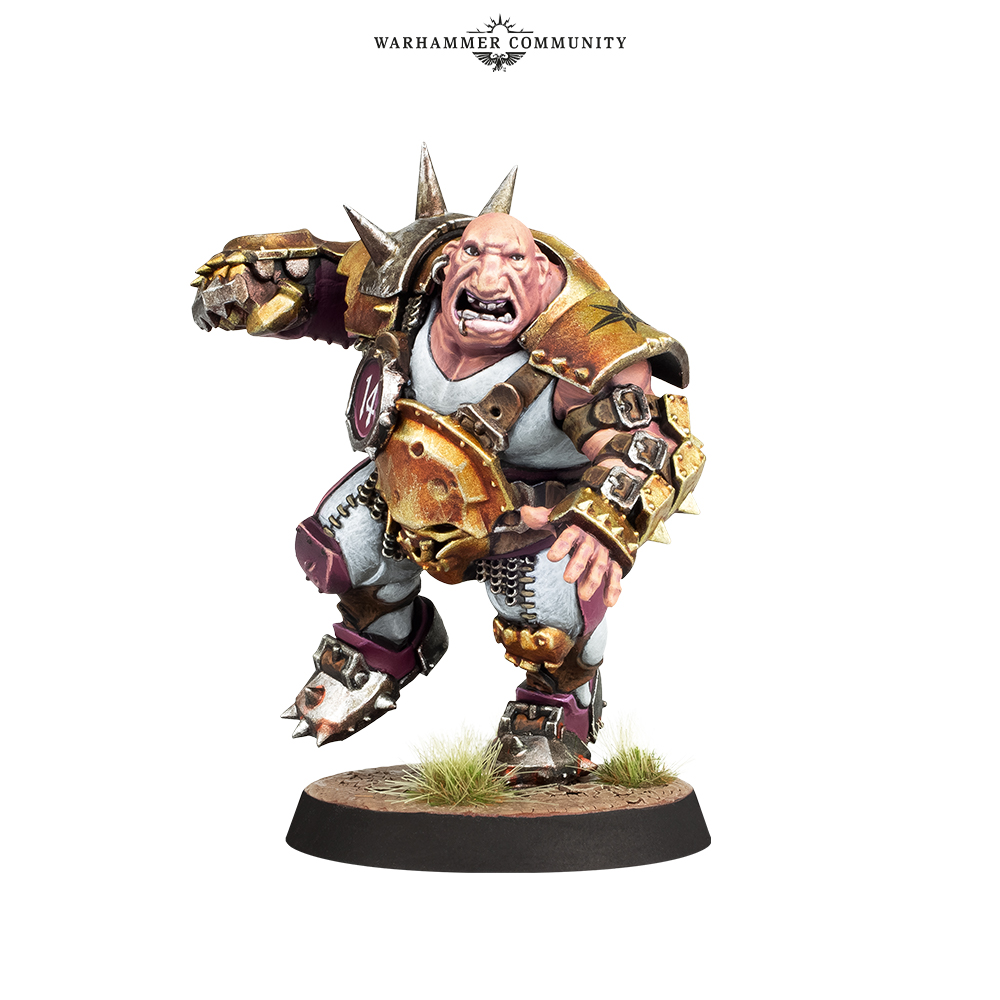 Feel like you need even more punch? Ogres are a purely combat-oriented powerhouse, freeing up other elements of your team to focus on scoring plays. Between the Bodyguards and an Ogre, the opponent’s coach might not be sure where to concentrate their efforts!

Lucky for you, the Blood Bowl: Second Season Edition box includes an Ogre, not to mention Griff Oberwald, one of the finest Star Players in the game! 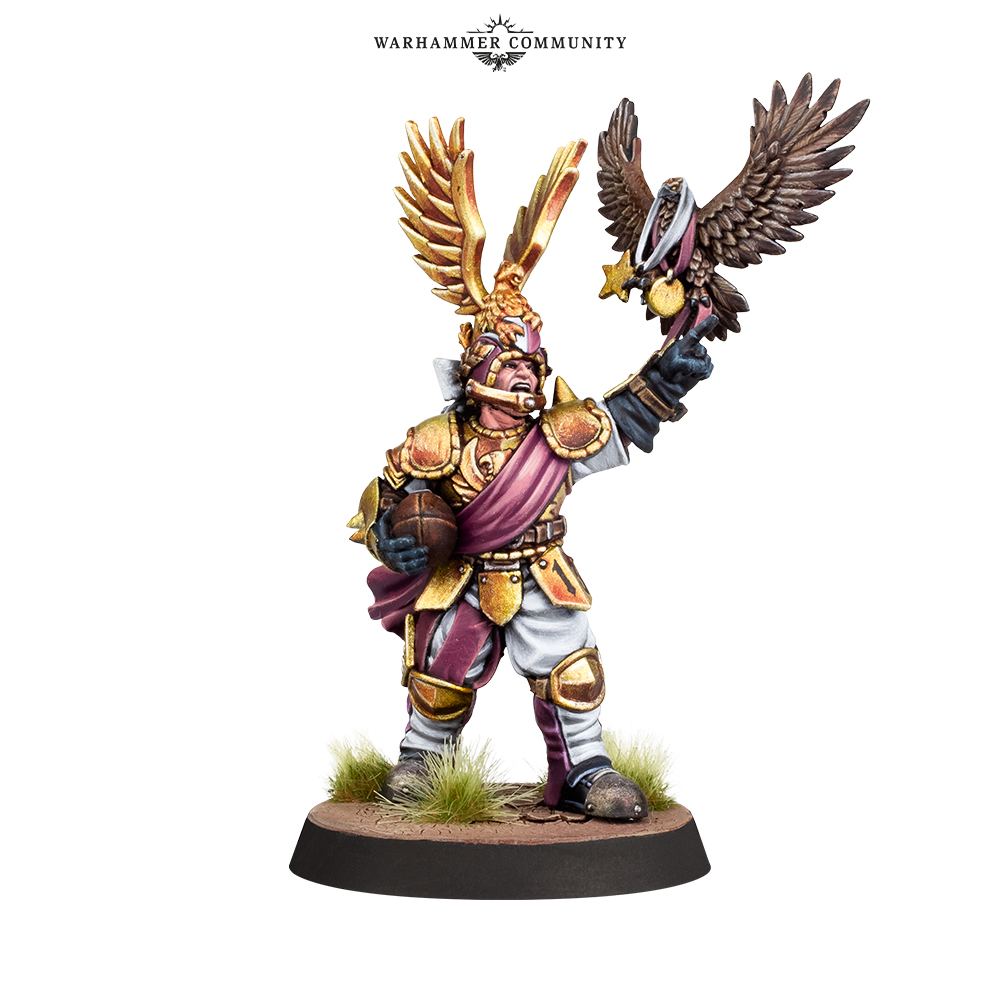 He’s not cheap to sign, but he’s an incredible player. Look, even his bird has gold medals! 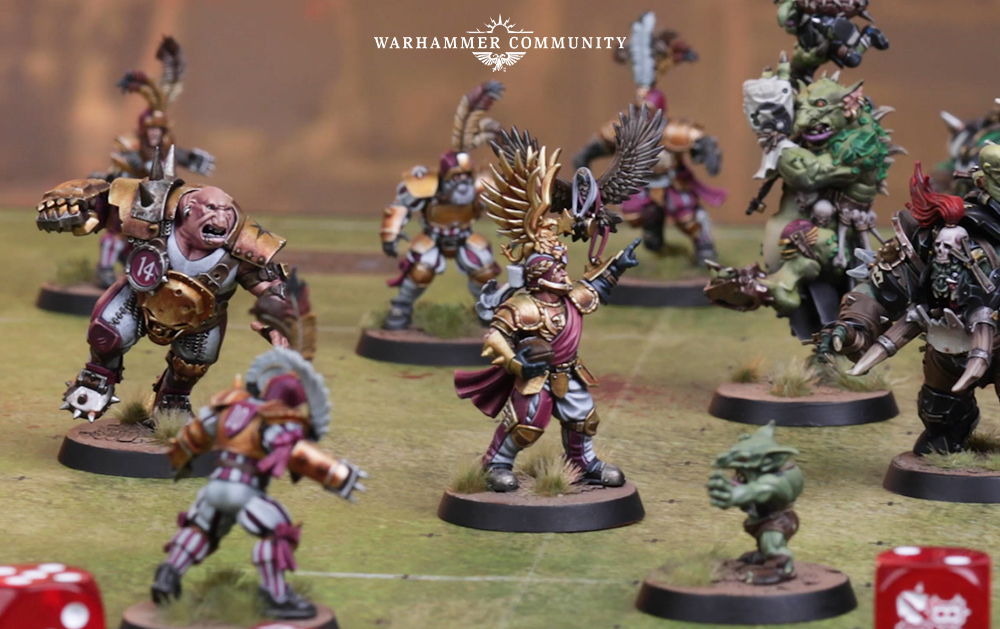 Pre-order Blood Bowl: Second Season Edition from this Saturday, and get ready to impress your new fans with the flashy moves and fancy uniforms of your Imperial Nobility team.

Spike! Journal Issue 12 is coming soon, so get the dirt on the latest plays for Imperial Nobility and Black Orc teams.

New warbands, teams, Titans, and books are all up for grabs.