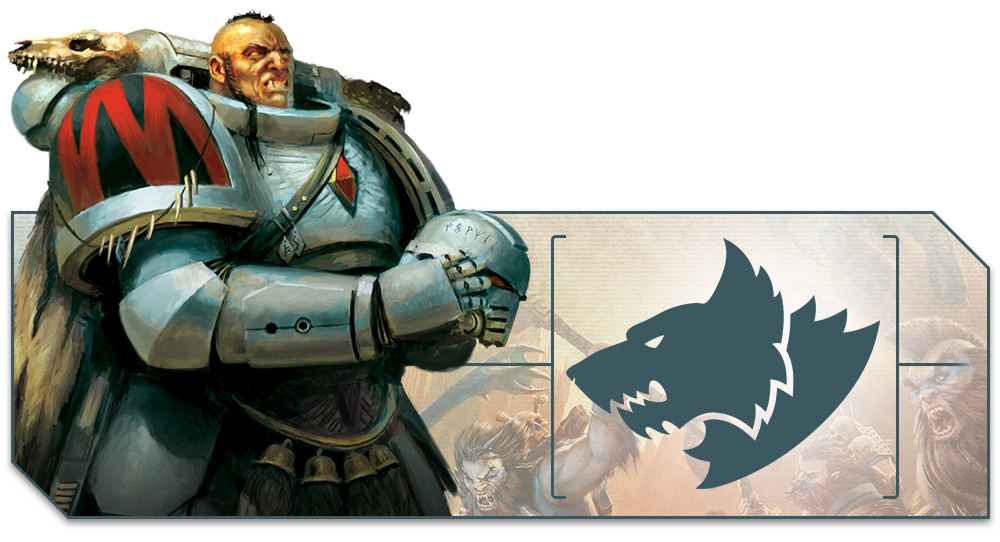 The Space Wolves are a fierce warrior brotherhood of legendary heroes, each vying to earn a saga that will grant them immortality in the tales told by the skjalds of their Chapter. Their new codex supplement will be available to pre-order this Saturday, and today we’re looking at some of the Stratagems and Relics that are included in this mighty tome, as well as introducing how their Warlord Traits reward mighty deeds in battle. 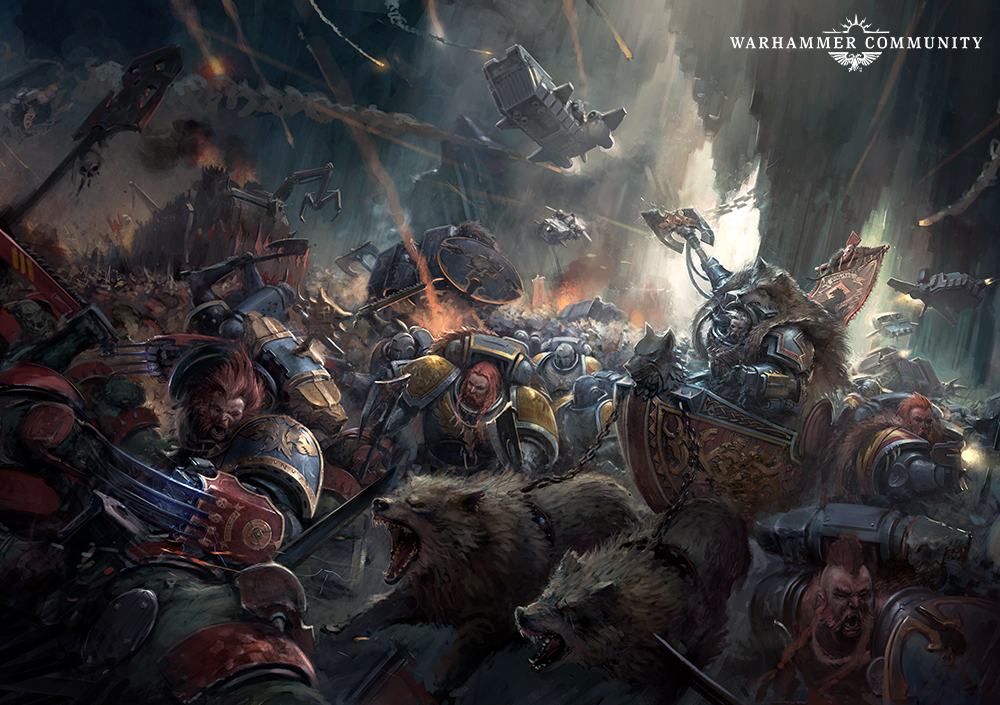 As we know from Codex: Space Marines, the Space Wolves don’t mess about when it comes to getting stuck into the enemy on the battlefield, with EVERY ELIGIBLE UNIT now able to make Heroic Interventions. 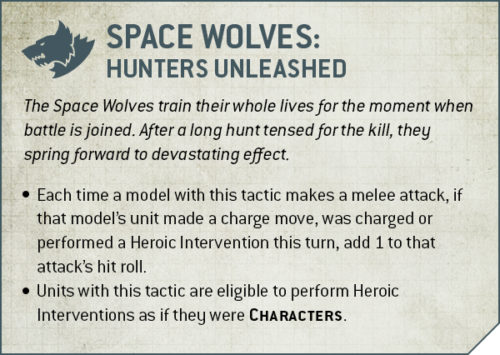 What’s more, once the Assault Doctrine kicks in, so too does the uncaged ferocity of the Space Wolves, who will tear through their foes with Savage Fury. 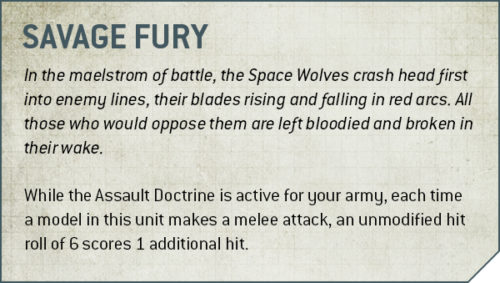 On the topic of the sons of Russ, the Space Wolves are no longer the only ones! That’s right, the genius of Belisarius Cawl has seen the creation of a number of successor Chapters who bear the gene-seed of Leman Russ. We’re pretty sure we even saw an appearance by the Wolfspear in the new codex expansion… So, for the first time, there are also guidelines for fielding Space Wolves successors in battle.

To Earn a Saga

One aspect of the Space Wolves that really sets their leaders apart from those of other Adeptus Astartes Chapters is how their Warlord Traits work. Codex Supplement: Space Wolves not only includes six bespoke Warlords Traits but also six Sagas related to them. A Character can earn a Saga in battle by performing the Deed associated with their Warlord Trait, and in doing so, they’ll gain an inspirational Saga ability for their efforts! 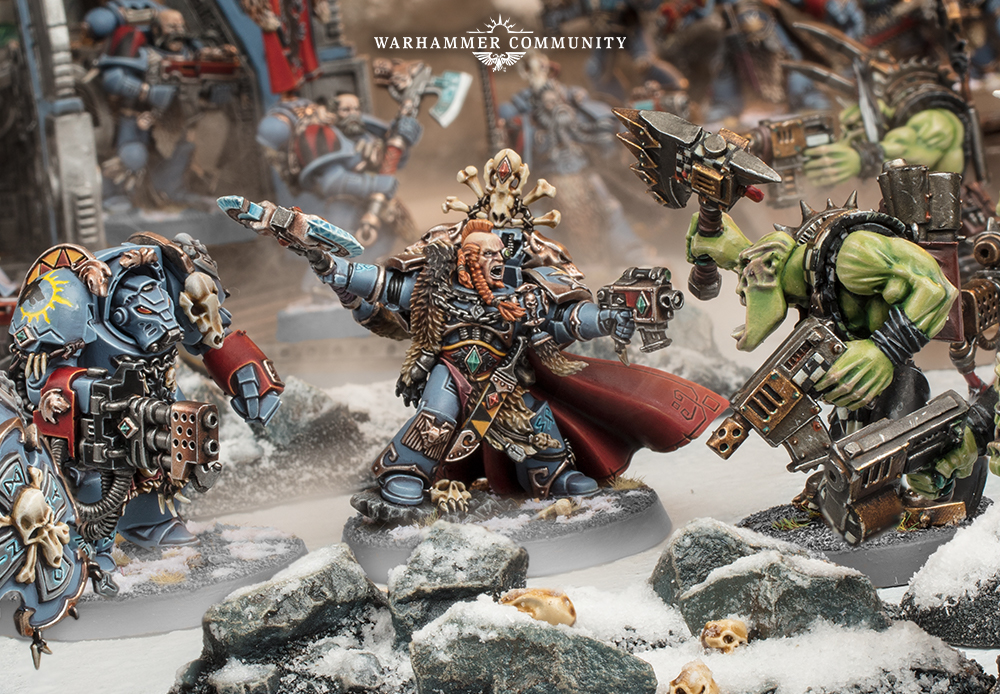 Take the Wolfkin Warlord Trait, for example. Once such an alpha warrior spills the blood of an enemy, they will inspire a savage bloodlust among their nearby kin, who will unleash their inner beasts to the ruin of those who would dare oppose them. 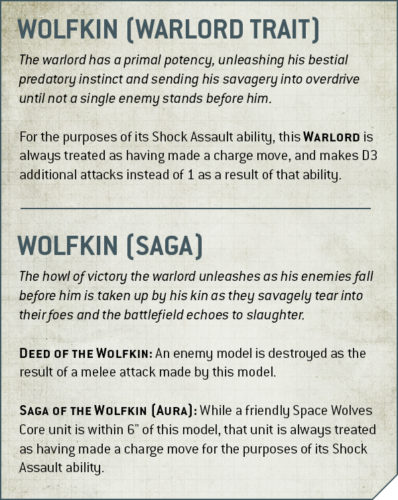 Of course, for your Character to accomplish their Deed, they’ll need to get stuck into the enemy and earn it – after all, a hero of the Space Wolves wouldn’t have it any other way!

Relics of the Fang

You’ll also be able to make use of some of the deadliest weapons and esoteric wargear available to the warriors of the Space Wolves with their powerful Relics. First up, the return of a classic… 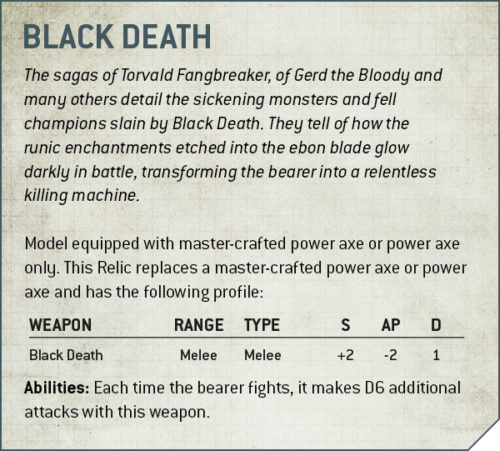 Turn your Character into a whirling infantry blender with this brutally destructive axe – a great pick for a Primaris Battle Leader!* 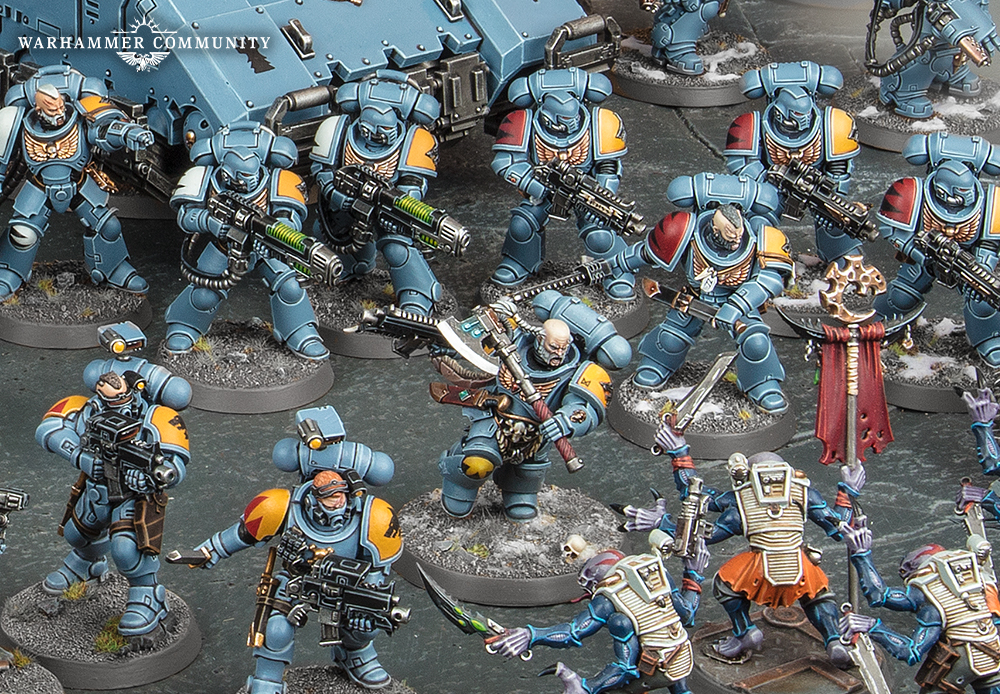 Alternatively, if you’d rather your character wield a blade of your own creation, you can use a Special-issue Wargear upgrade that represents one of the Chapter’s iconic melee weapons… 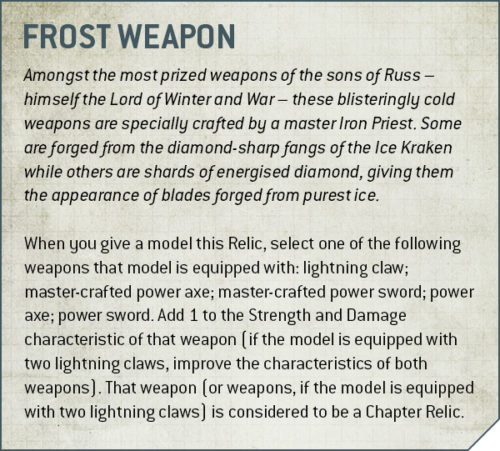 Stratagems of the Space Wolves

The Space Wolves are renowned for their cunning as well as their ferocity and have a number of bespoke Stratagems that showcase their methods of war. First up, the ranks of the Space Wolves are filled with mighty warriors whose many heroic deeds are known throughout the Chapter, and their lengthy sagas recited by the skjalds every Allwinter’s Eve. If you’re struggling to decide which Warlord Trait to choose, simply use this Stratagem and take two! 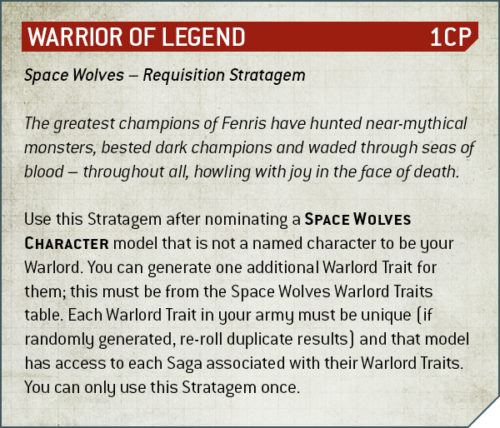 The Wolf Priests of the Space Wolves are much like the Chaplains of other Chapters, though they’re also highly skilled in the healing arts, and perform similar roles to Apothecaries in addition to their other duties.** 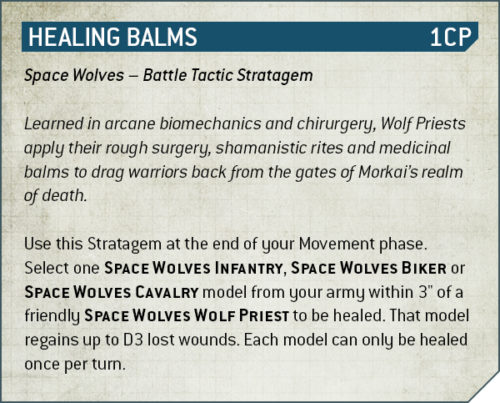 The Hounds of Morkai

The Space Wolves are also set to receive a brand-new unit in the form of the Hounds of Morkai, a Reiver variant exclusive to the Chapter. 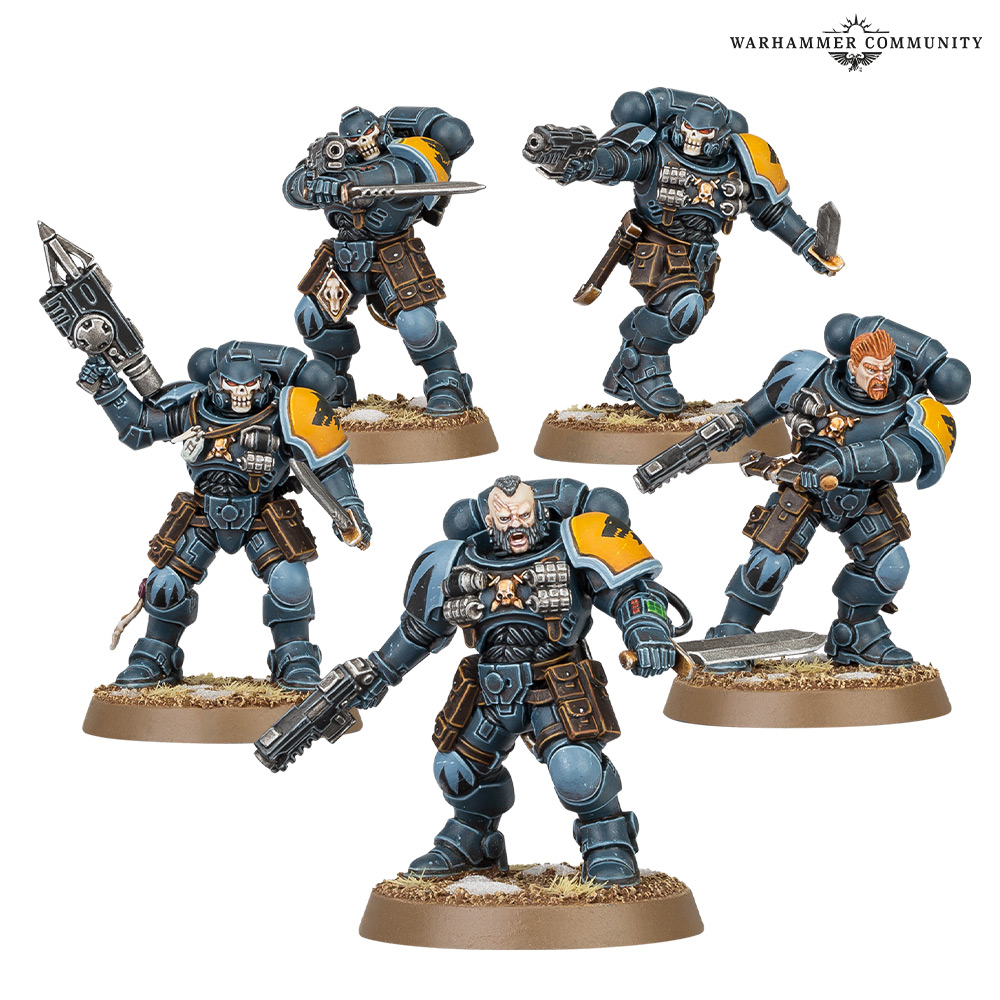 Clad in the midnight armour of the Cult of Morkai, the Hounds are relentless hunters of enemy psykers, warded against the wyrd with runic totems. Once they’ve caught the scent of their quarry, the hapless witch is as good as dead. 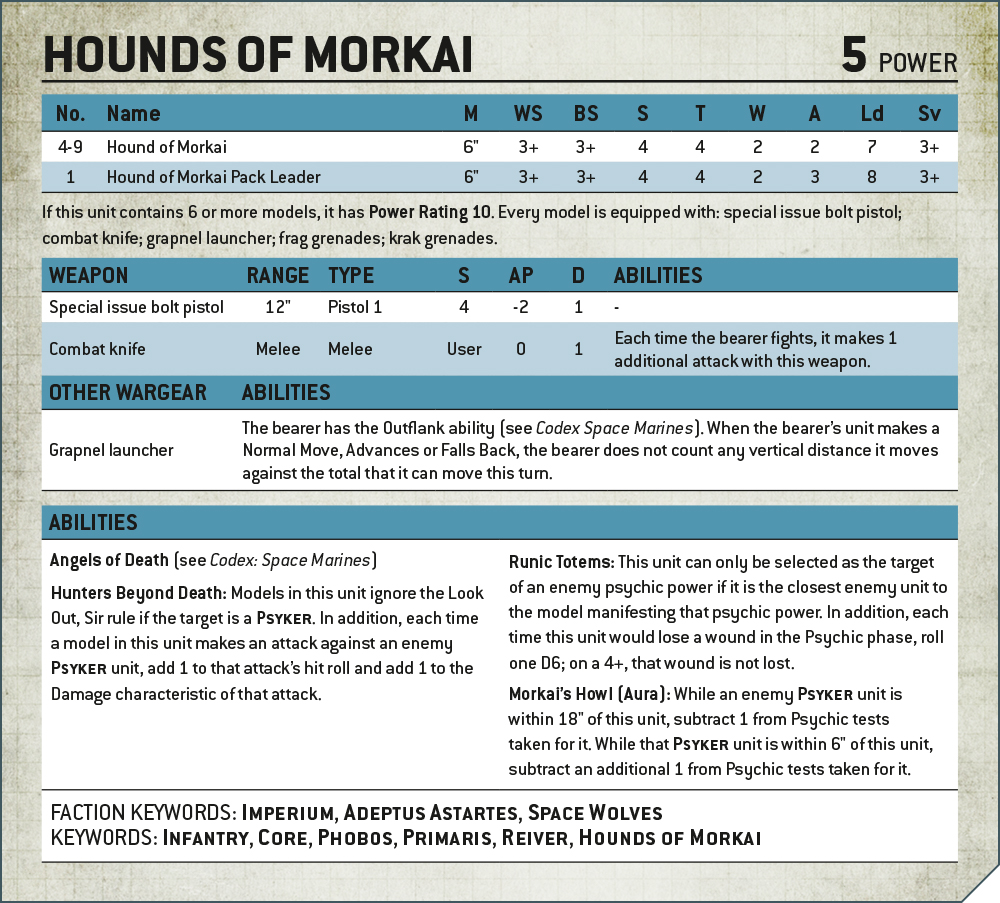 All that and we’ve barely clawed the surface of the exciting new rules in the book! We’ll have more on the Space Wolves codex supplement soon, so keep an eye out for our preview of their new Crusade rules later in the week.

* That’s a Primaris Lieutenant if you’re being picky!
** That’s some serious multitasking right there.

Discover the upcoming board games from the Warhammer 40,000 and Warhammer Age of Sigmar universes.

The Emperor’s Spears get official new lore and rules

Check out our preview of White Dwarf’s Index Astartes on the Emperor’s Spears – written by the Chapter’s creator.