Middle-earth™: Around the Community – The Fellowship

In today’s blog, the Middle-earth team’s herald Jay Clare brings word of glorious Fellowships and their constituent members that have been painted across the lands…

Jay Clare: It’s time, once again, to venture into the wider Middle-earth community to seek out some of the fantastic miniatures painted by fans of the Middle-earth Strategy Battle Game. The theme this time is ‘the Fellowship’, so any character who was part of the most iconic group of Heroes in Middle-earth. The standard of miniatures submitted has been the highest we’ve seen yet – let’s take a look!

We start with this wonderful rendition of Gandalf the White on Shadowfax painted by Amy Bearman. White can be a difficult colour to paint well, but Amy has masterfully achieved multiple shades of white for the various sections of the model – each one is subtly different enough to make them stand out against the others. Amy has rounded the model off with a lovely scenic base, complete with an array of flowers. 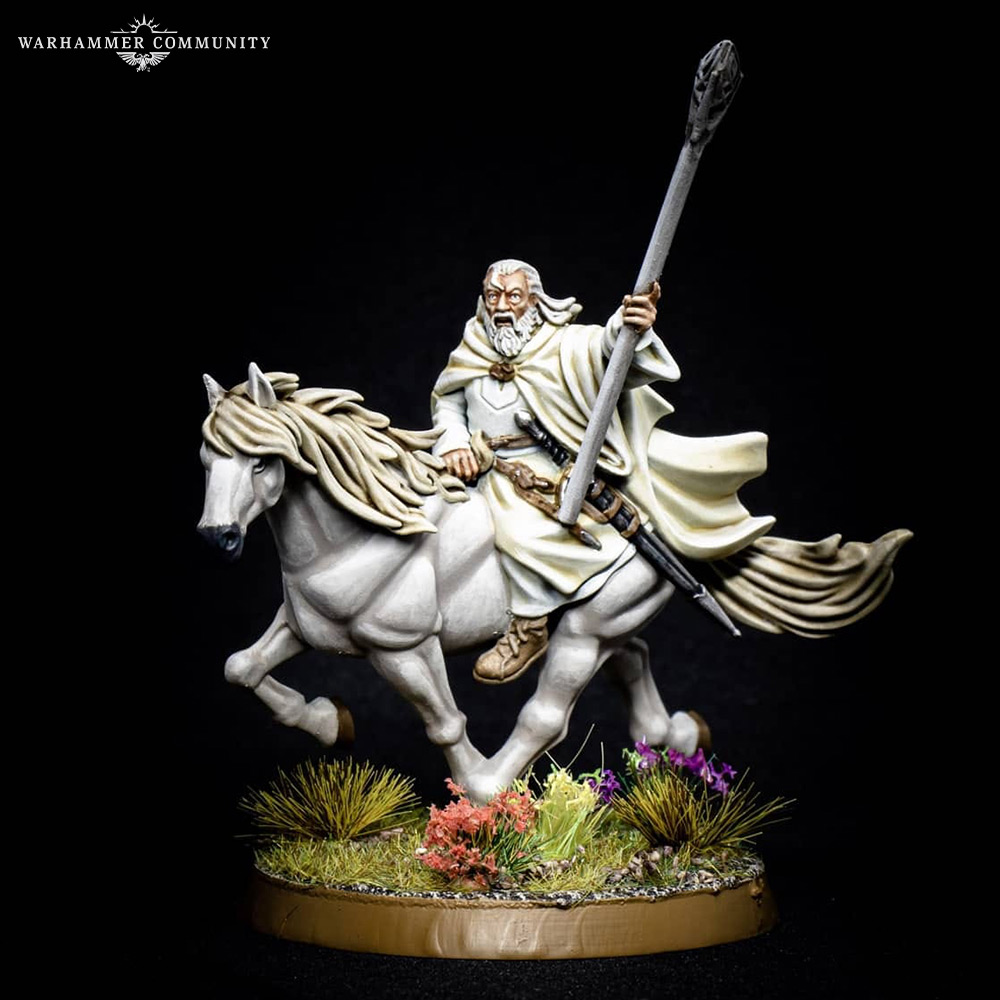 Now, we couldn’t have a Fellowship-themed article and not show off a few versions of the whole Fellowship, could we? Paweł Wilk has painted this amazing Fellowship, showcasing them within the Mines of Moria. Perhaps the most impressive feature of Paweł’s work is the object source lighting effect that he has painted onto both Sting and Glamdring, as the Elven weapons glow blue to indicate the nearby presence of Goblins… 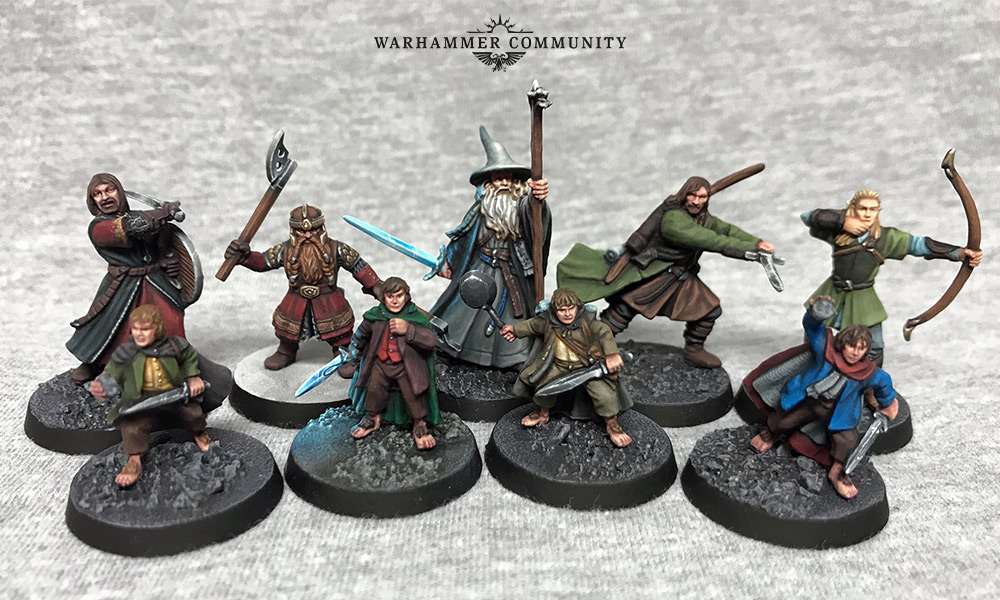 Gimli has always been a popular character with painters and Middle-earth fans alike, and this version was the work of the talented Samuel Sachs. The detail Samuel has managed to apply to the model is outstanding, from the skin tones on the face to the patterns on the lower parts of Gimli’s armour, not to mention the gold detailing on Gimli’s helmet and many axes. 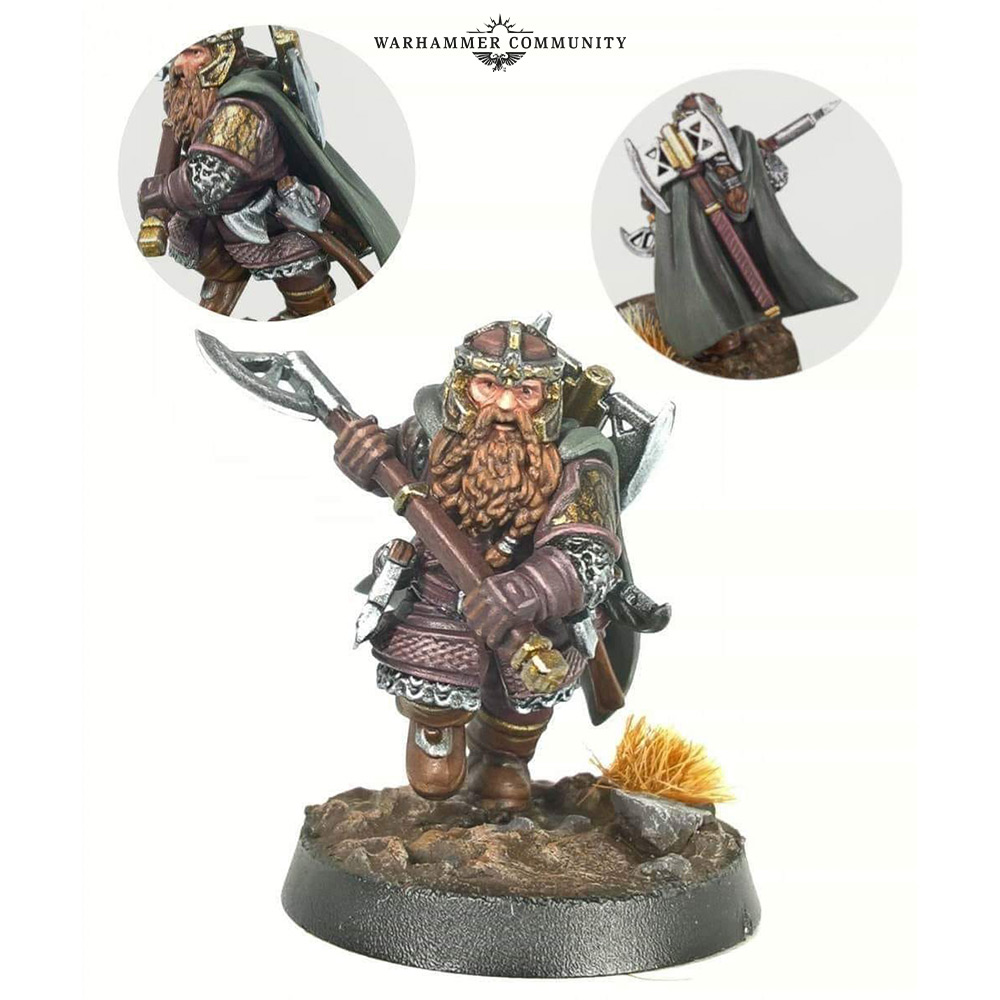 Sticking with everyone’s favourite Dwarf, this classic Gimli miniature has been painted by Seán McGee. The various tones and shades of the red cloth Gimli is wearing have been expertly reproduced, and his cloak looks suitably worn. Seán has even managed to freehand the patterns on Gimli’s greaves! 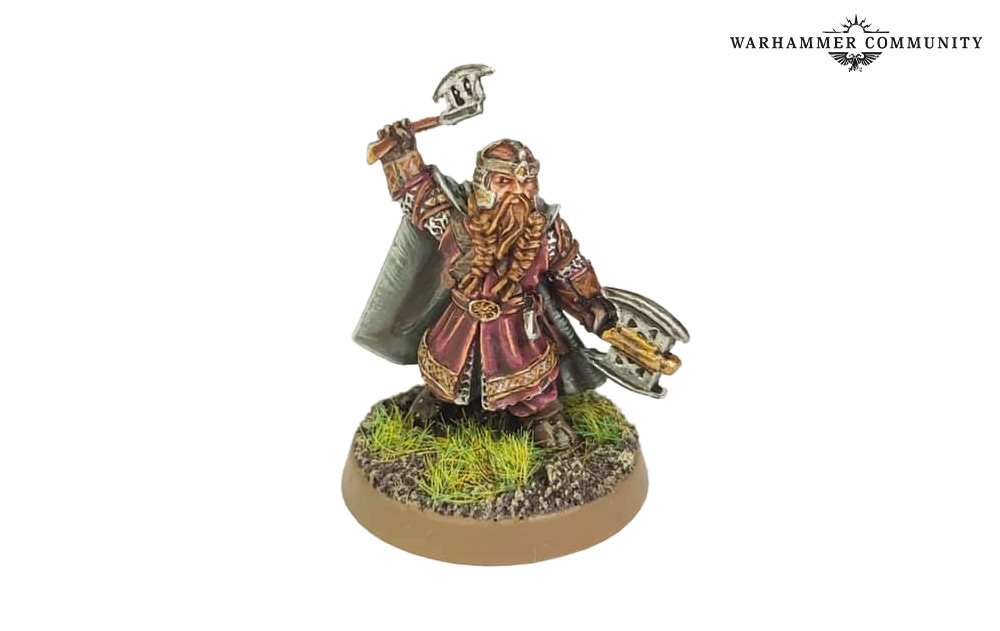 Next, we have Stuart Mack’s classic Fellowship of the Ring. The brightly coloured highlights Stuart has painted showcase every detail the models have to offer. Each model perfectly captures the likeness of the characters they portray, providing Stuart with this wonderful collection of Middle-earth’s greatest Heroes! 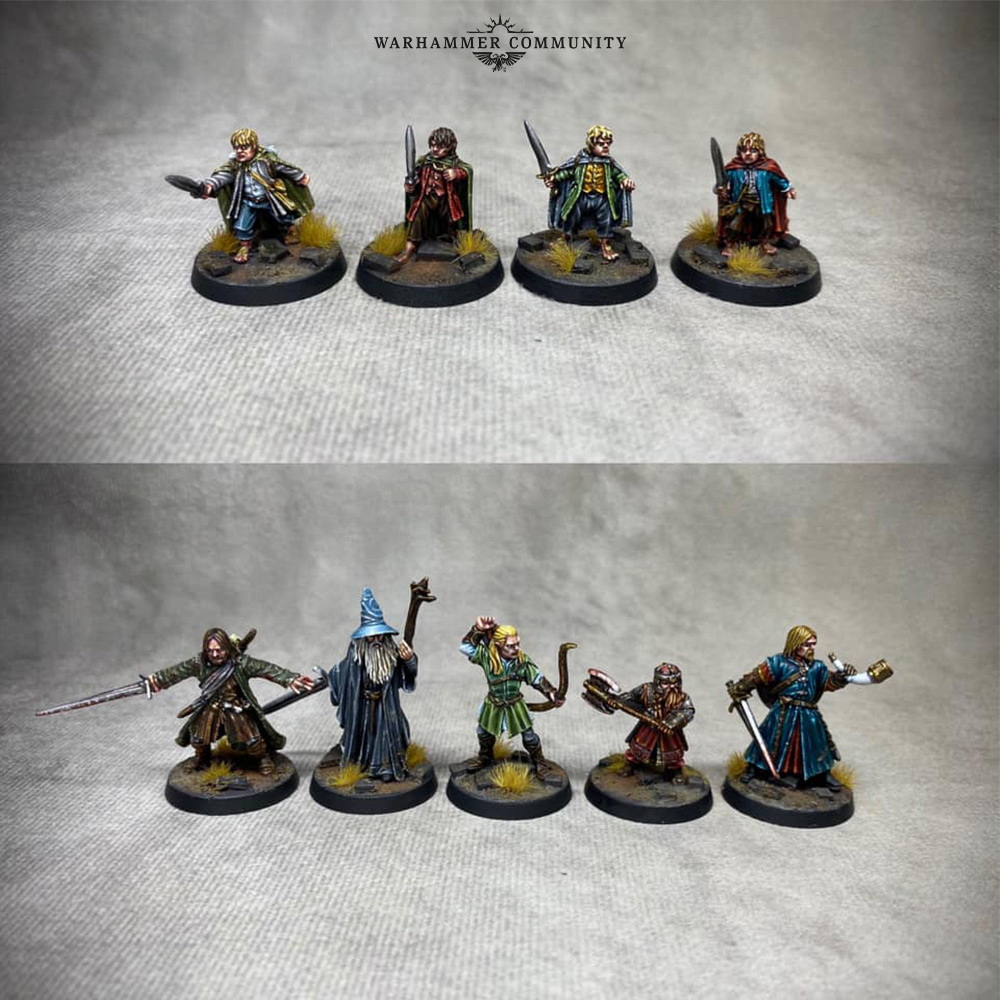 Boromir is a favourite character of many fans of Middle-earth, and this version of the son of Denethor has been lovingly painted by Klemen Stegu. Klemen has gone to great efforts to faithfully represent the character we see on screen, even painting the gold trim on Boromir’s sleeves. The bright colours of the Horn of Gondor make this important item stand out, especially against the dark clothes. 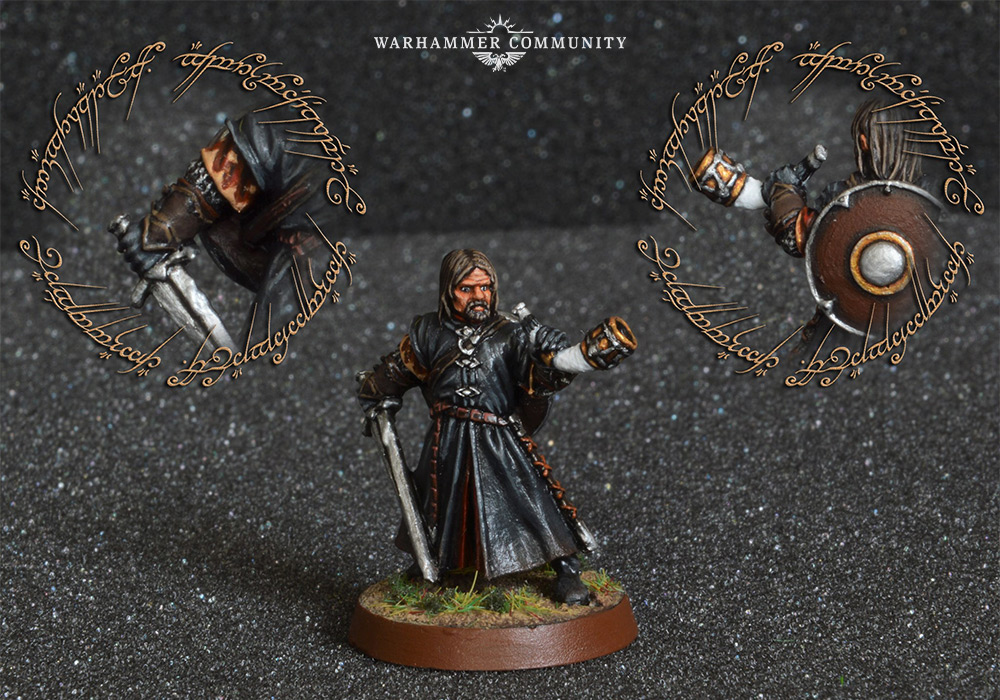 Collectively Aragorn, Legolas, and Gimli are known as the Three Hunters, and Simon Andrews has painted these exquisite examples of the formidable trio. Simon has perfectly captured the colours and likenesses of the three Heroes, making them appear as if they have been lifted straight from the movie. The skulls on the bases suggest that Aragorn is leading his friends through the terrifying Paths of the Dead… 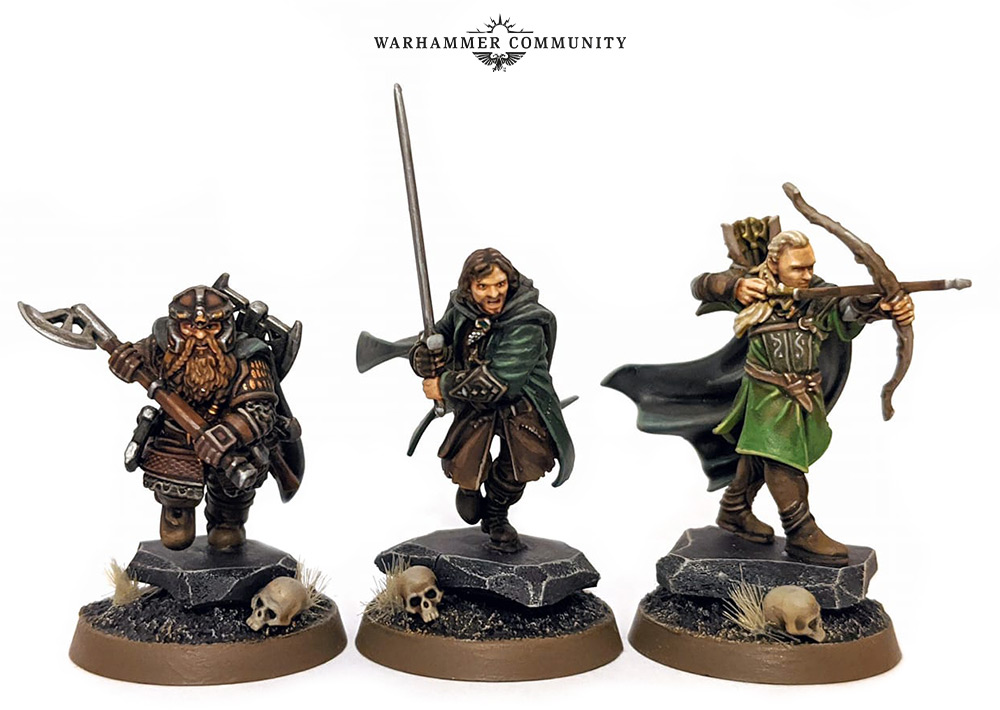 Perhaps the most tragic event for the Fellowship is that which occurred at Amon Hen – a classic scene in both the movies and the books. Kalman Steels-Wright has themed his Fellowship around this moment – hence the lack of Gandalf, who fell in Moria. Kalman’s bold and striking colour schemes enhance all the details of the models, and he’s even made an objective marker with a small fire and Boromir’s shield on it!

The members of the Fellowship go their separate ways after the events of Amon Hen, with many of them taking different paths.* Merry ends up as an Esquire of Rohan, and Steve Beckett painted this version of the fun-loving Brandybuck in his Rohan garb. While Steve’s paint job is mesmerising, he’s paid particular attention to the Hobbit’s shield and armour to great effect. 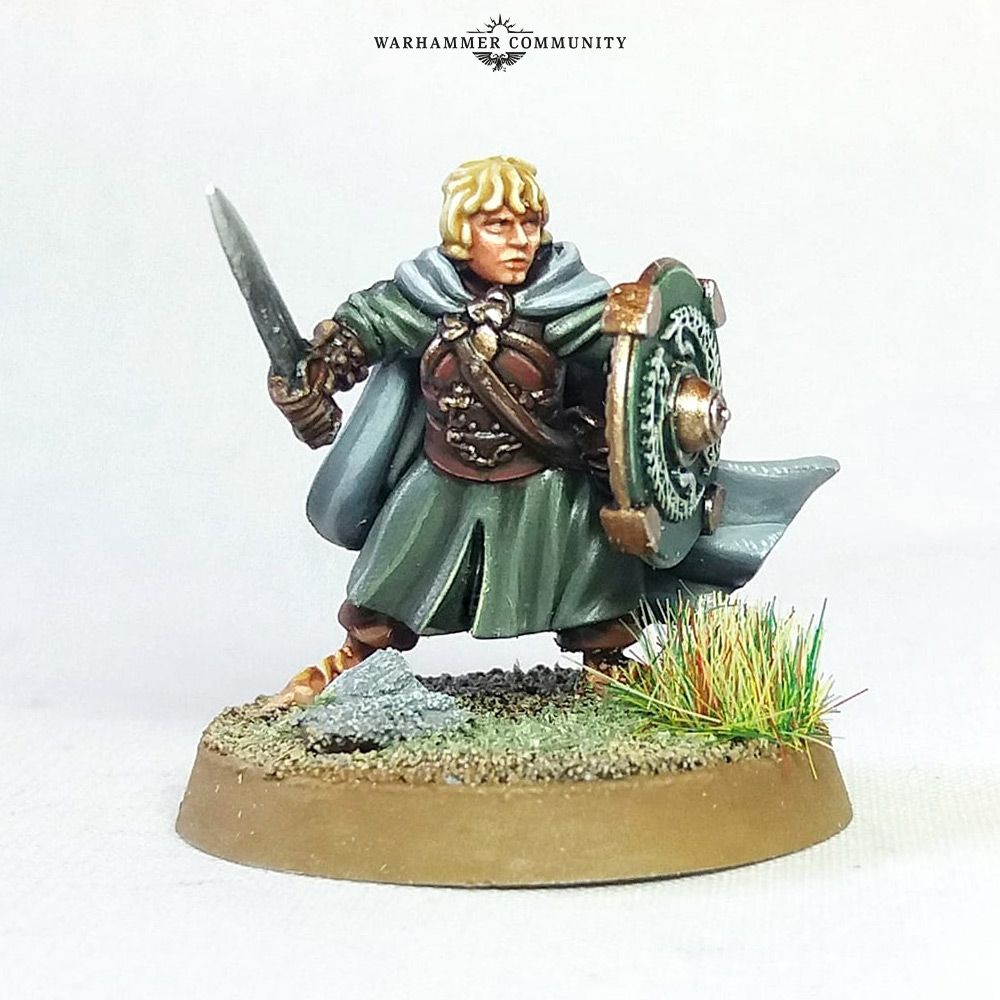 Finally, we have this stunning Aragorn painted by Alejandro Rodríguez. The level of detail Alejandro has achieved is exceptional, from the sharp and expertly painted highlights across the model to the wonderful example of Andúril, Flame of the West, which shows the legendary sword gleaming in the light. 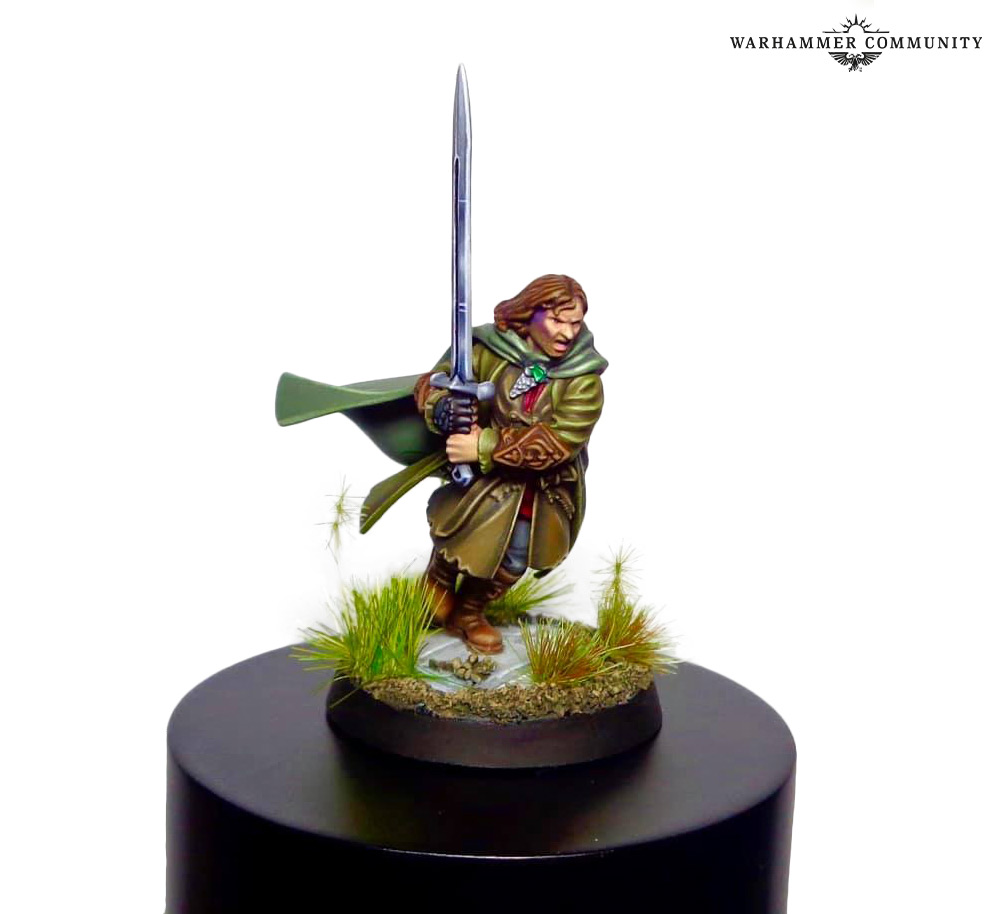 Thanks, Jay, and to everyone who sent in pictures of their models! Have you got any painted members of the Fellowship you’d like to show us? Why not take some photos and share them on our Warhammer Official Facebook page? You never know – you could end up featuring in our next Around the Community blog!

* Off the Falls of Rauros in Boromir’s case! What? Too soon?!

The time has come for all the news and jaw-dropping reveals from the NOVA Open Warhammer Preview. Seriously – if …

Whether you need help in the underhive or in Hobbiton, we have something for you in the shape of new …

See one of Warhammer’s most ambitiously converted collections.