Sneaking slowly through the underbrush, stalking their prey with uncharacteristic patience, the Ork Kommandos are an altogether different breed of threat for kill teams operating in the Octarius Sector.

Generals expecting hordes of brutish killers instead find themselves pinned down by sniper fire, ambushed by wall-breaching drills, and chopped to pieces by monstrous greenskins that leave survivors baffled as to how they managed to creep up on them.

We’ve picked out some of the most dangerous Orkish operators, and asked Wes, one of the game’s playtesters, for his thoughts on this kunnin’ band of greenskins. 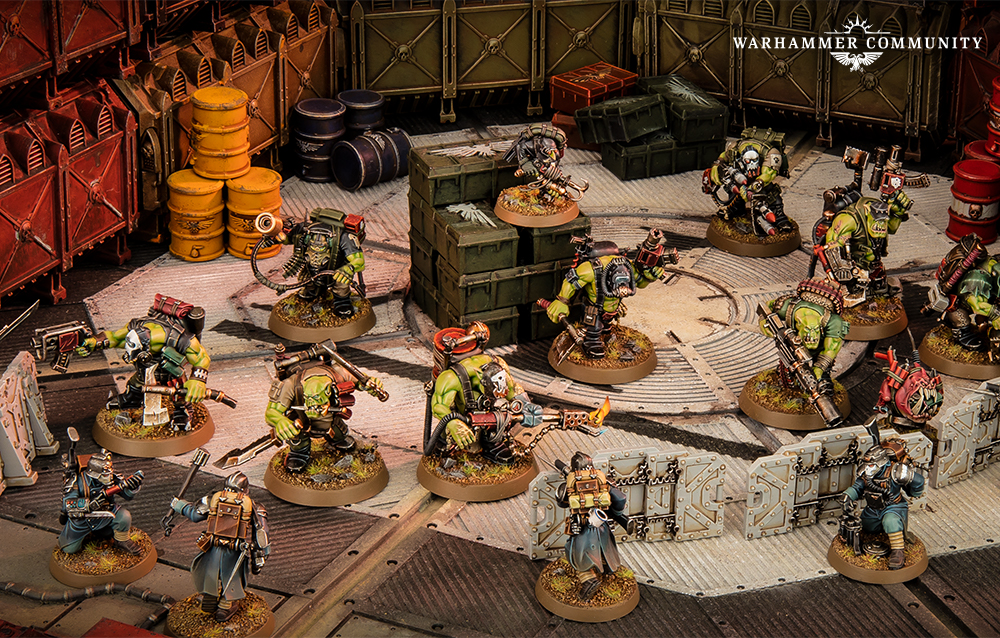 They may differ from regular Orks by sticking to the shadows and only bellowing “Waaagh!” once their cover is blown, but Kommandos are still every bit as lethal as their less subtle chums.

“Those diehards who love to charge their opponents won’t be disappointed by their choppas, which can quickly end a Guardsman in a single bout of combat,” Wes explains. “However, Kommandos come into their own when they play with the guile that they are famed for.”

While all Orks love physical violence, Kommandos can be much more singular in their passion. The Nob, for instance, is perfectly at home cracking his own boyz’s skulls as often as his enemies’ and keeps order using little more than size and violence.* 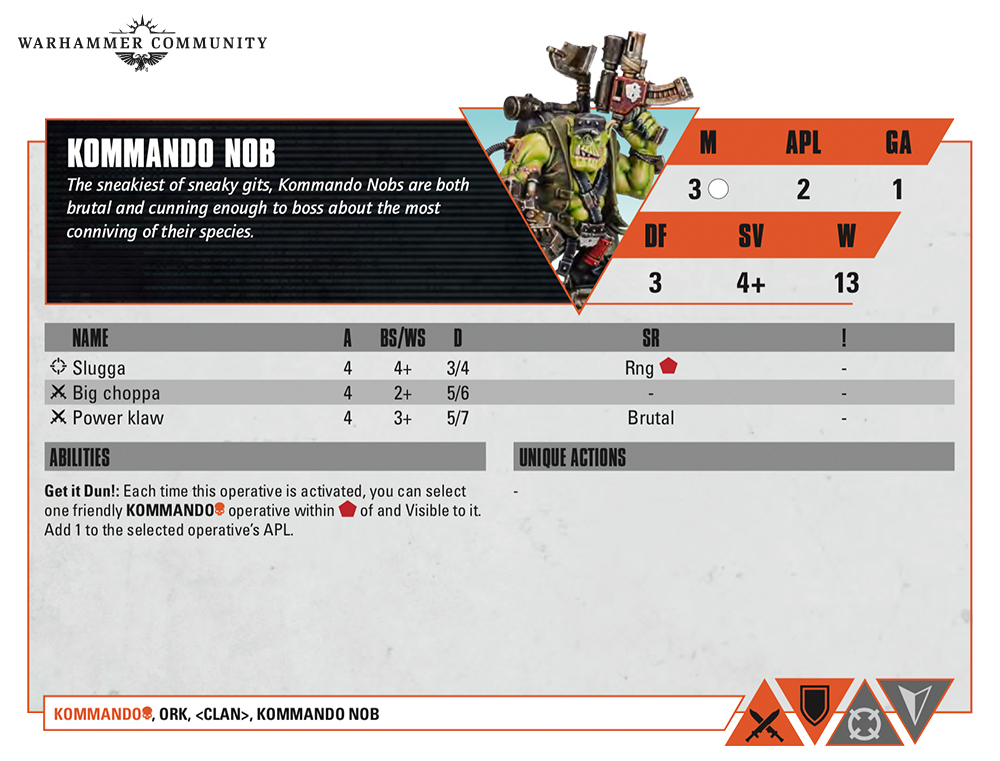 Meanwhile, the particularly eager Breacha Boy isn’t about to let minor obstacles like solid ferrocrete walls get between him and a scrap.

“With his ability to smash straight through most terrain, the Breacha Boy is one to watch out for,” Wes notes. “He’s great for grabbing objectives or catching an enemy operative unawares.” 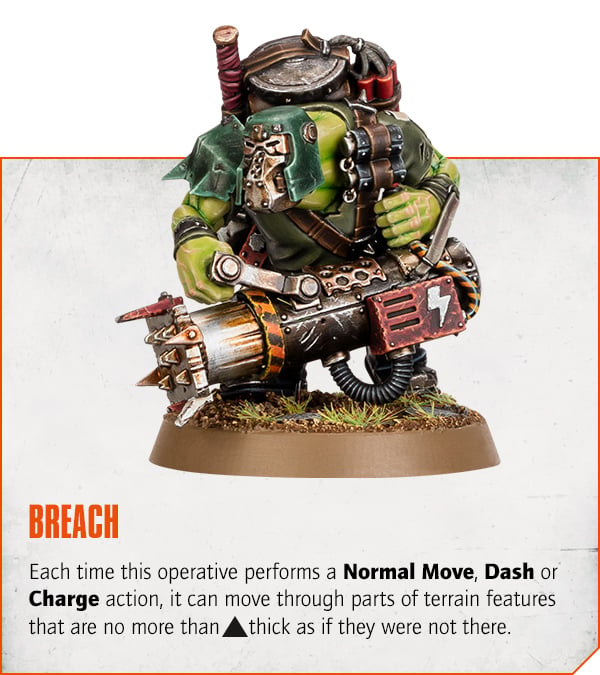 As the ancient Ork saying goes, “when all you ’ave is a choppa, everyfin’ looks like a humie.” With more weapons than he can hold in two hands, the Slasha Boy sees a lot of humies to chop. These boyz are so blood-crazed that any fighter who manages to slip past their guard gets a swift headbutt for their trouble. 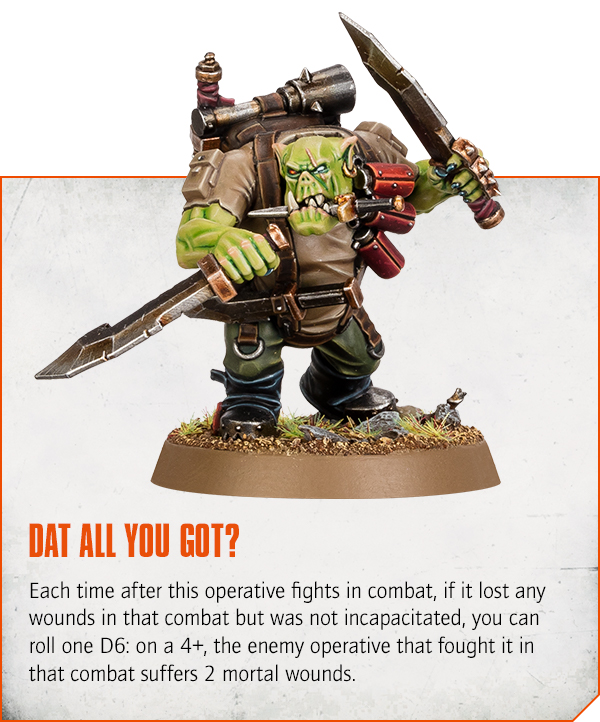 Long periods away from their clans lead many Kommandos to adopt un-Orky practices like training, and some even become shockingly proficient marksmen – for an Ork, that is.

The Dakka Boy has discovered that blasting away with his triple-barrelled dakka shoota is just as much fun as hitting things, and he’s an unusually accurate and mobile attacker that few opponents see coming.

Wes found a good use for this Kommando’s skills during playtesting. “Dakka Dash allows the Dakka Boy to unload on unsuspecting enemy operatives before dashing back into the relative safety of cover,” he says. “The game psychology of this is enormous, and when placed in the right part of the battlefield, he’s virtually unstoppable.”. 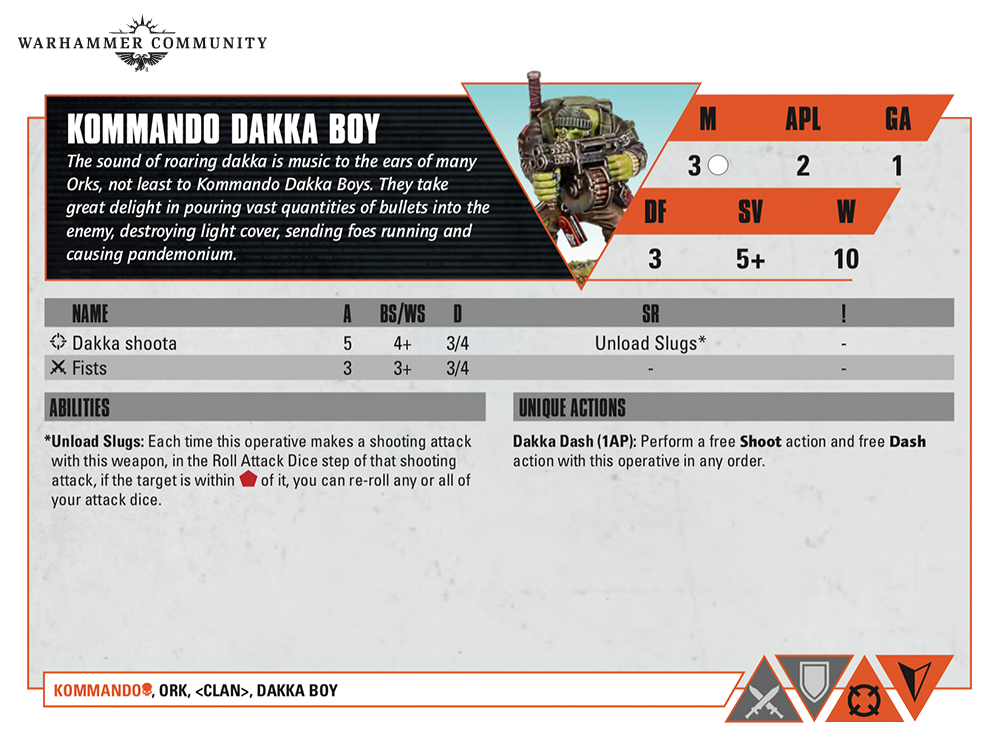 The idea of an Ork sniper might seem ludicrous to some,** but Kommandos take wicked glee in dropping their enemies from afar. The Snipa Boy is still an Ork, of course, so he wields a scoped big shoota rather than a flimsy rifle like other factions. If you fire more bullets, you’re more likely to hit, right? 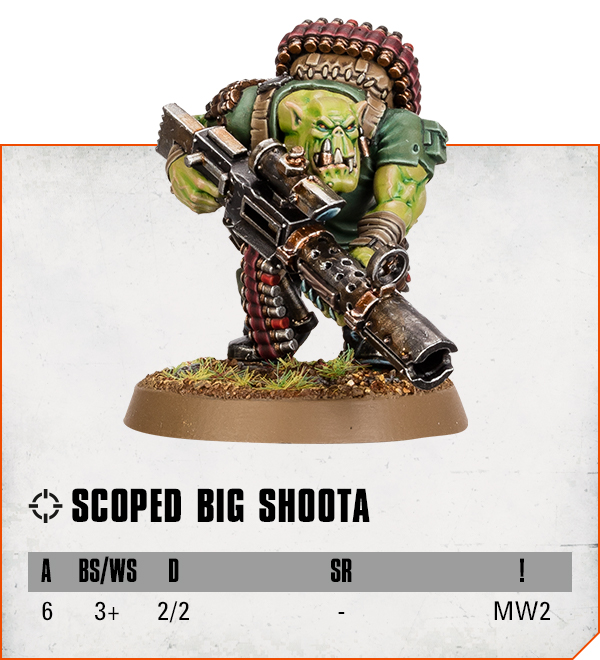 Burna Boyz, Rokkit Boyz, and comms specialists add their own strategic options to the Kommandos, but you’ll have to wait to find out more about them – they’re still under deep cover.

Let’s not forget the deranged Kommando Grot, though, which is both “annoying” and “hilarious” Wes tells us. “Used well, this grot will win you games,” he says. “The grappling hook can zoom the grot across the board to a piece of terrain that’s visible to it, where it can grab an objective and zoom back to safety.” 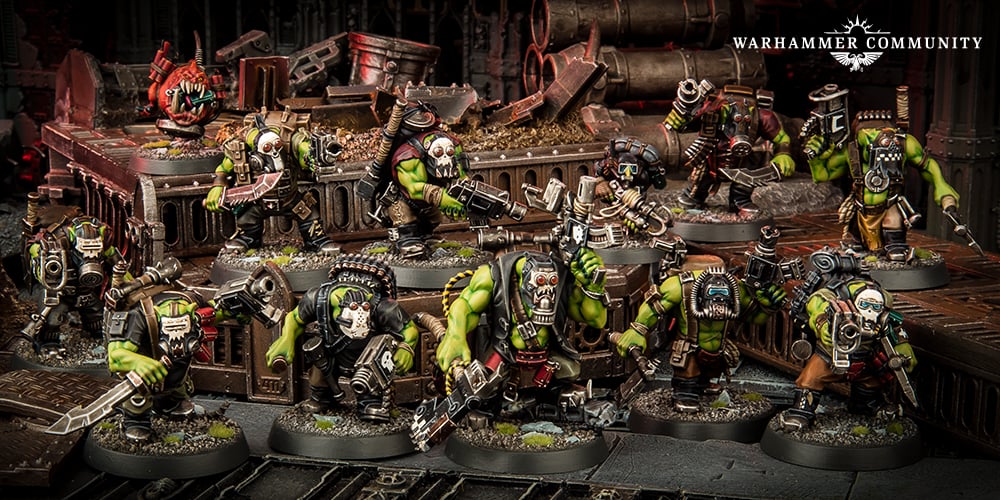 Many thanks to Wes for the playtester insight on this gang of dangerous specialists. The Kommandos are one of the two forces you’ll find in Kill Team: Octarius, so join us again tomorrow as we get to know the Veteran Guardsmen of Krieg. The new edition is rapidly approaching, with pre-orders opening this month, so you’ll want to scoop up as much intel as you can.

Have you decided how you’re going to paint your Kommandos yet? You can find a wealth of in-depth guides and tutorials on the shiny new Citadel Colour website, so head on over and check out all the resources available to both new and expert painters..

* Which in Ork terms makes him a staunch traditionalist, when we think about it.

** So ludicrous that some blame their attacks on the Inquisition. Which is absurd, naturally.

The 41st Millennium’s cinematic skirmish combat has been redesigned from the ground up, and you won’t want to miss it.

The amazing all-new Kill Team will be available to pre-order from next week!

Ranged combat rules have been totally rebuilt – find out how you’ll be taking shots at your opponent.