It’s Day 3 of our weeklong Warhammer Fest celebration, and we’re talking about all things Black Library. Get ready for a full-on book bonanza. A booknanza, if you will.

Missed today’s reveal show on Twitch? Fear not, you can catch it right here.

Before we get into revealing all the books you’ll be adding to your wishlist soon, it seems something has snuck into our announcement schedule…

That’s right, the Tanith First and Only are coming – behold the stars of Dan Abnett’s seminal novel series.

If you’re not familiar, Gaunt’s Ghosts are the protagonists of the long-running series depicting the trials and tribulations of Ibram Gaunt and his ill-fated Astra Militarum regiment. Faithful readers of the books no doubt have a soft spot for the original cast who served as their Colonel-Commissar’s most trusted retainers.

Well, they’re back! They’ve been redesigned in plastic to create a reimagined set of miniatures that really brings each of the key characters from the early Gaunt’s Ghosts books to life.

Amazing, right? If, however, you’ve yet to read the novels and are unfamiliar with these six core members of Gaunt’s Ghosts, allow us to formally introduce them (don’t worry – we’ll keep it spoiler-free).

Having been a rising star under the command of Imperial Warmaster Slaydo, the freshly appointed Colonel-Commissar was set to command three newly founded Astra Militarum regiments from the forest world of Tanith. 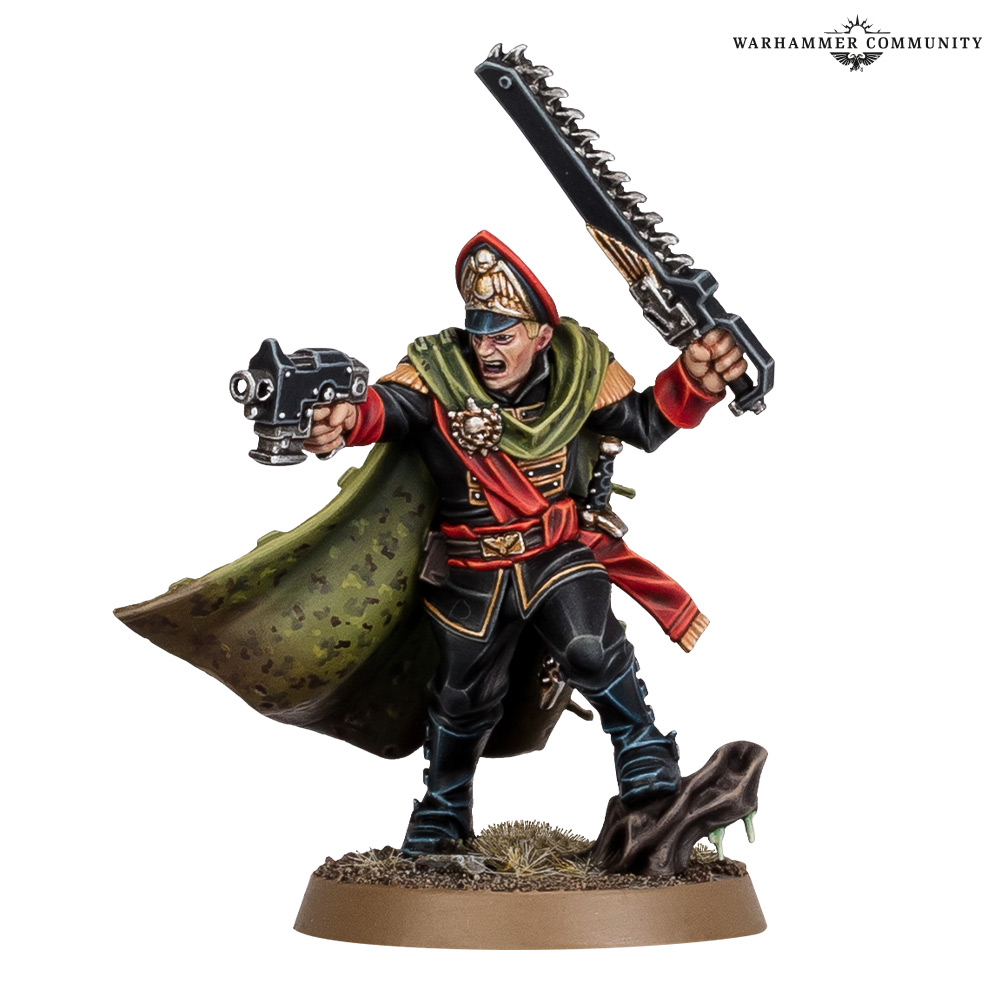 Yet when the planet was completely devastated by a Chaos invasion, only one regiment could be mustered from the survivors – hence the rather grim moniker that they inherited, the Tanith First and Only.

Gaunt soon discovered that the Tanith were light infantry without peer, their combination of woodsmanship and the distinct camo cloaks they wore ensuring their pre-eminence as scouts and stealth troopers. Gaunt would later use the innate skills of the Tanith to undertake daring raids and accomplish missions often deemed far beyond the capabilities of a regiment of Imperial Guard. 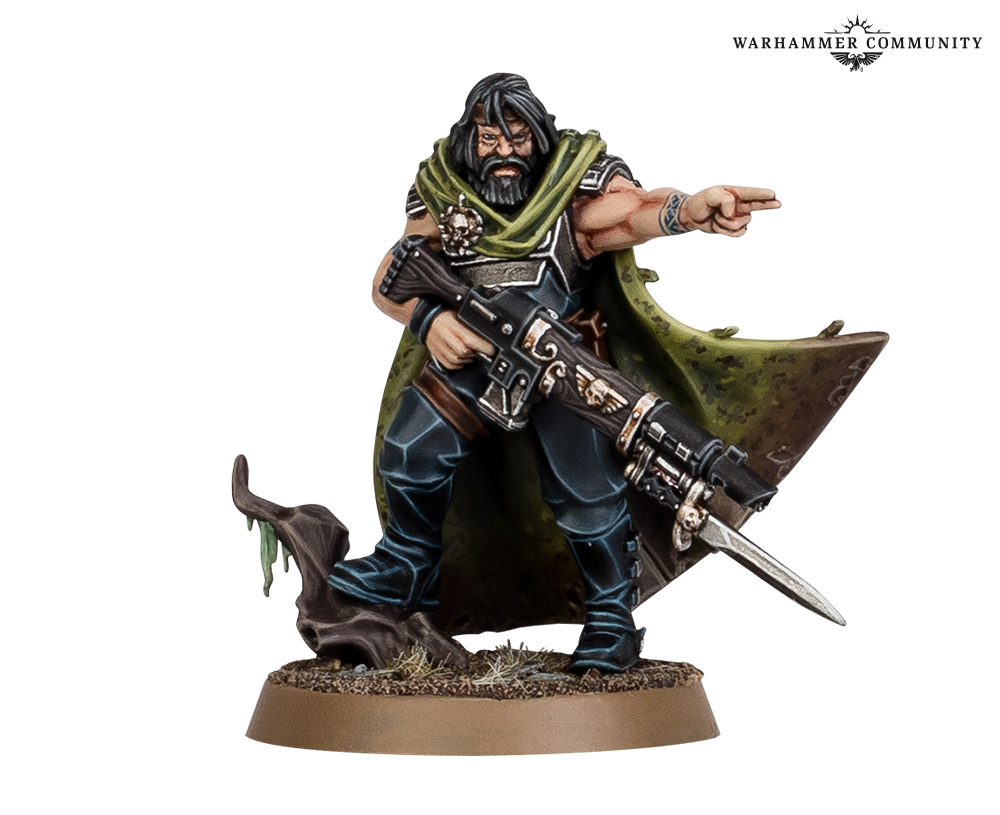 The big, powerful, if somewhat unkempt first officer of the Tanith First and Only, Colm Corbec leads the regiment’s second platoon. Colm is second in command, but he’s also Gaunt’s closest confidant – almost like a brother.

Despite possessing a ruthless streak a mile wide and a burning hatred towards Gaunt, who he blames for abandoning Tanith to its destruction, Elim Rawne is nonetheless a highly capable commander and leads the regiment’s third platoon. An expert with a blade, Rawne’s handsome face hides a murderous glint in his eyes, and he always keeps his razor-sharp Tanith warknife to hand. 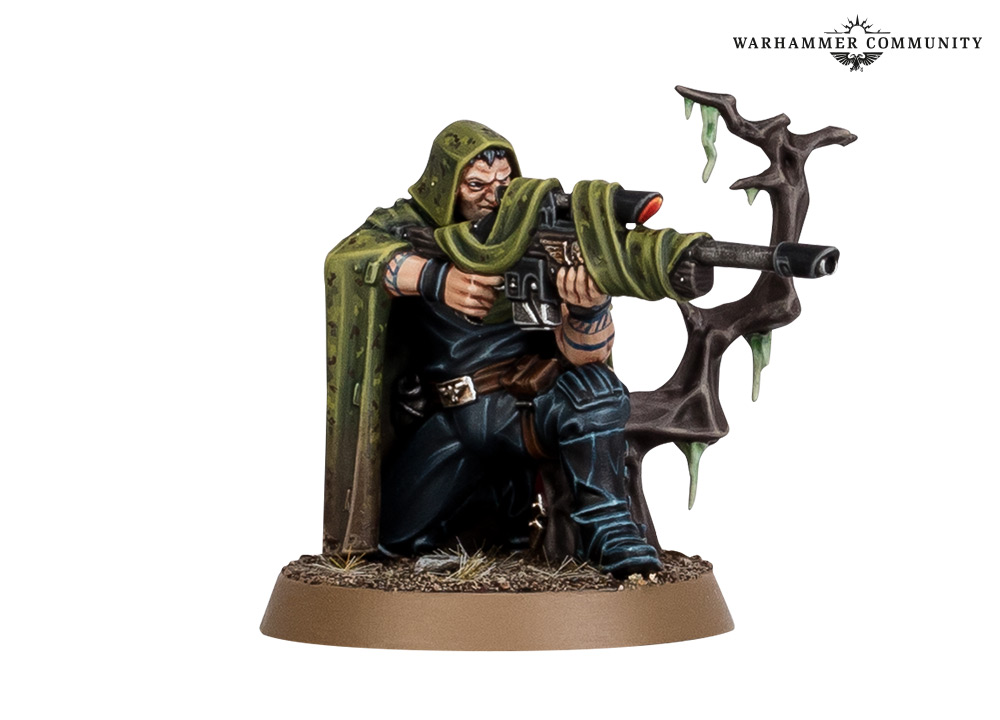 Hlaine ‘Mad’ Larkin may be somewhat eccentric, but it certainly doesn’t affect his aim. In fact, Larkin is widely lauded as the regiment’s finest marksman, and Gaunt often makes use of his dead-eye skills to eliminate threats to their mission from afar. 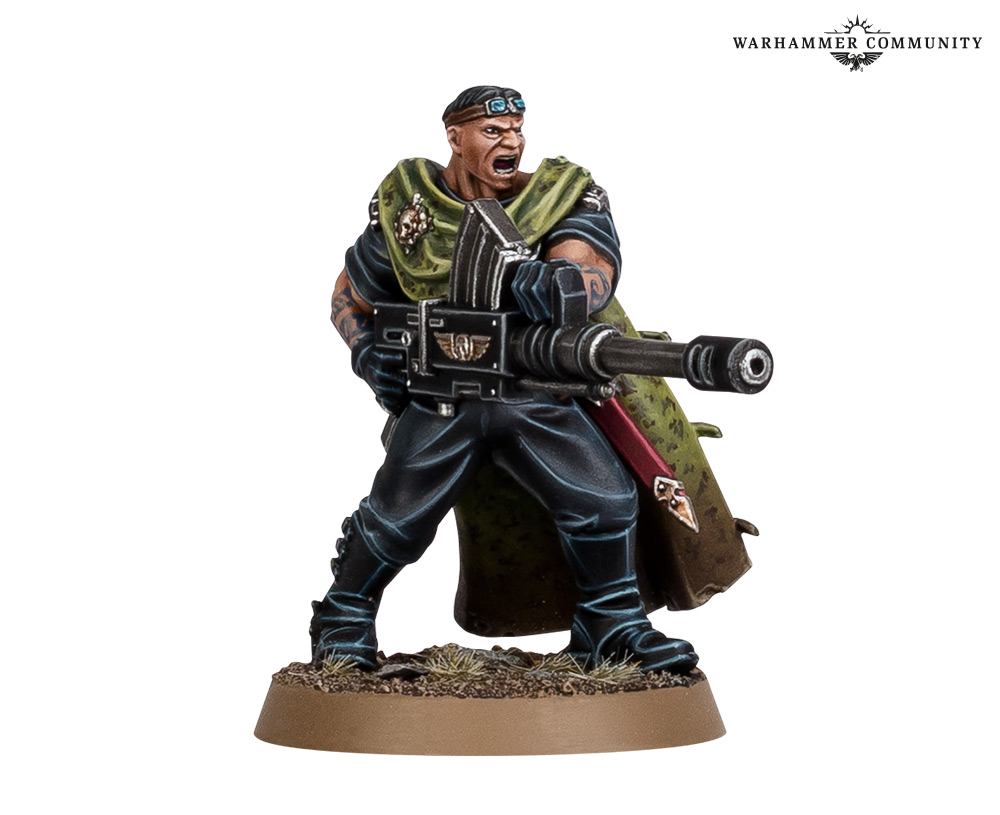 By far the biggest and strongest of the Tanith, Trooper Bragg towers over Colonel Corbec and even the tall, lean figure of Ibram Gaunt. Bragg serves alongside ‘Mad’ Larkin in Eleven Platoon and has such a powerful physique that he can wield heavy weaponry on his own without the need for a tripod mount. Unfortunately, his accuracy leaves a lot to be desired, earning him the nickname ‘Try Again’. 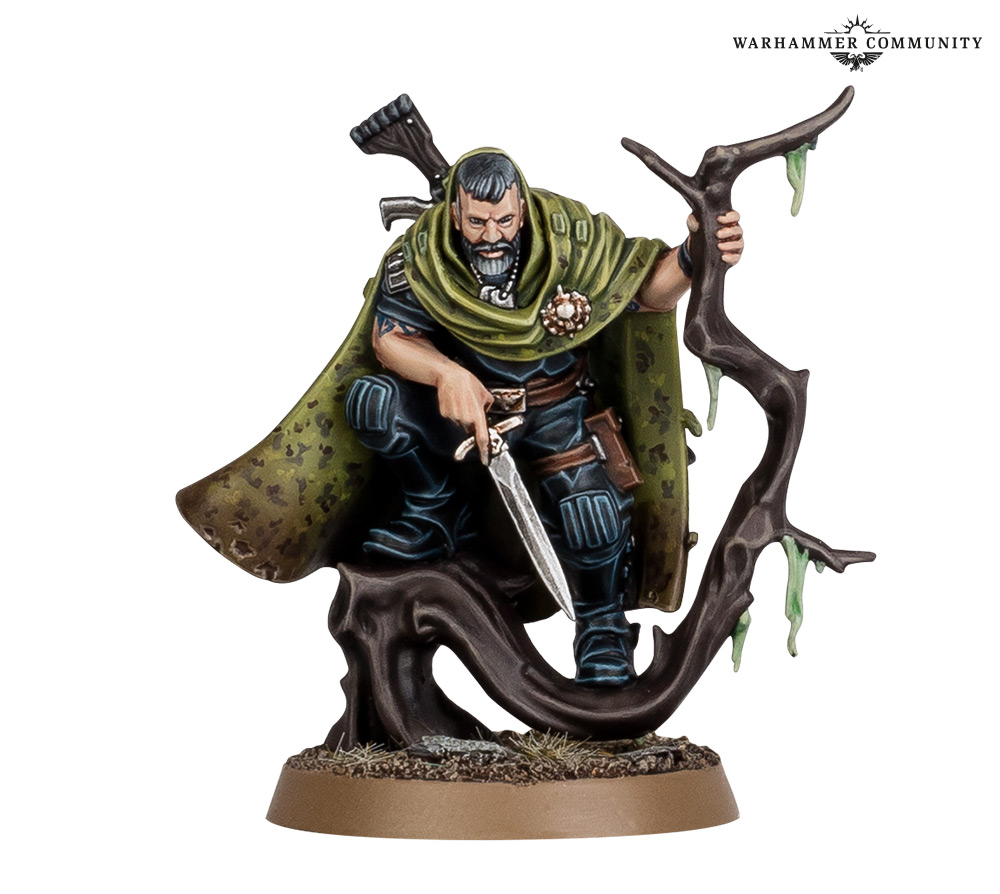 Four Platoon is the regiment’s scout platoon, led by Oan Mkoll. However, unlike more traditional regimental organisations, the scouts of Four Platoon are often spread out among the other Tanith platoons to serve as specialists. Mkoll is among the very best, having long mastered his craft amid the shifting woods of his former homeworld.

And there you have it – six stunning miniatures that perfectly encapsulate the characters they represent from the novels. Whether you’re an avid fan of the series or a painter looking for your next challenge, Gaunt’s Ghosts will be the perfect addition to your collection.

Now that we’ve got the news of those incredible miniatures out of our system, let’s talk about… BOOKS.

To drive the theme all the way home, and celebrate the Tanith First and Only in style, we’ve got a host of Sabbat Worlds-related offerings to show you. 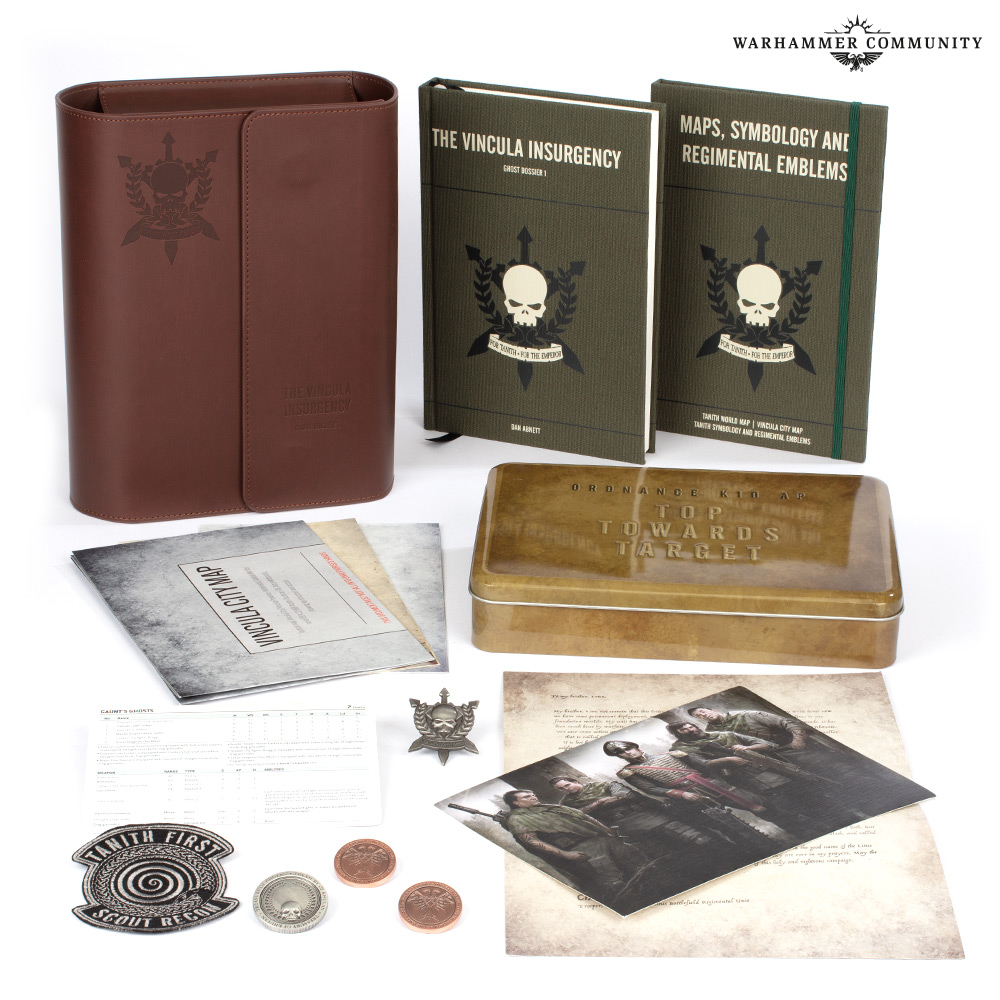 Dan Abnett’s new novel takes us back to the earliest days of Ibram Gaunt and the Tanith First, where you’ll learn about a dark secret that’s haunted them ever since.

This mega limited edition includes a beautifully bound copy of the book itself, plus a whole host of extras. You’ll find a pair of maps, a cap pin, coins, art, a metal memory box, and loads more. Also included is a datasheet with rules to use Gaunt’s Ghosts in your games of Warhammer 40,000. 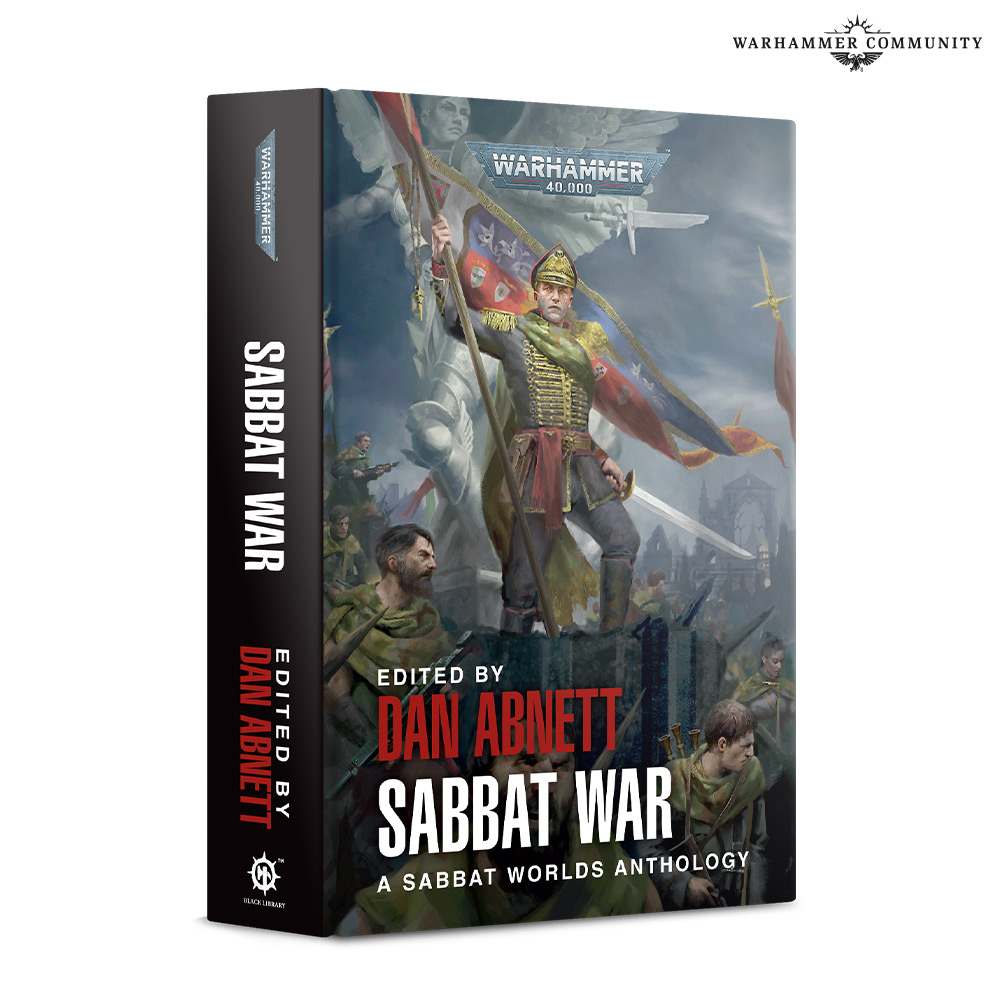 This anthology takes you to the very forefront of the blistering action in the Sabbat Worlds. It features new stories from some of your favourite authors, including Dan Abnett (naturally), Graham McNeill, John French, Matthew Farrer, and Rachel Harrison. 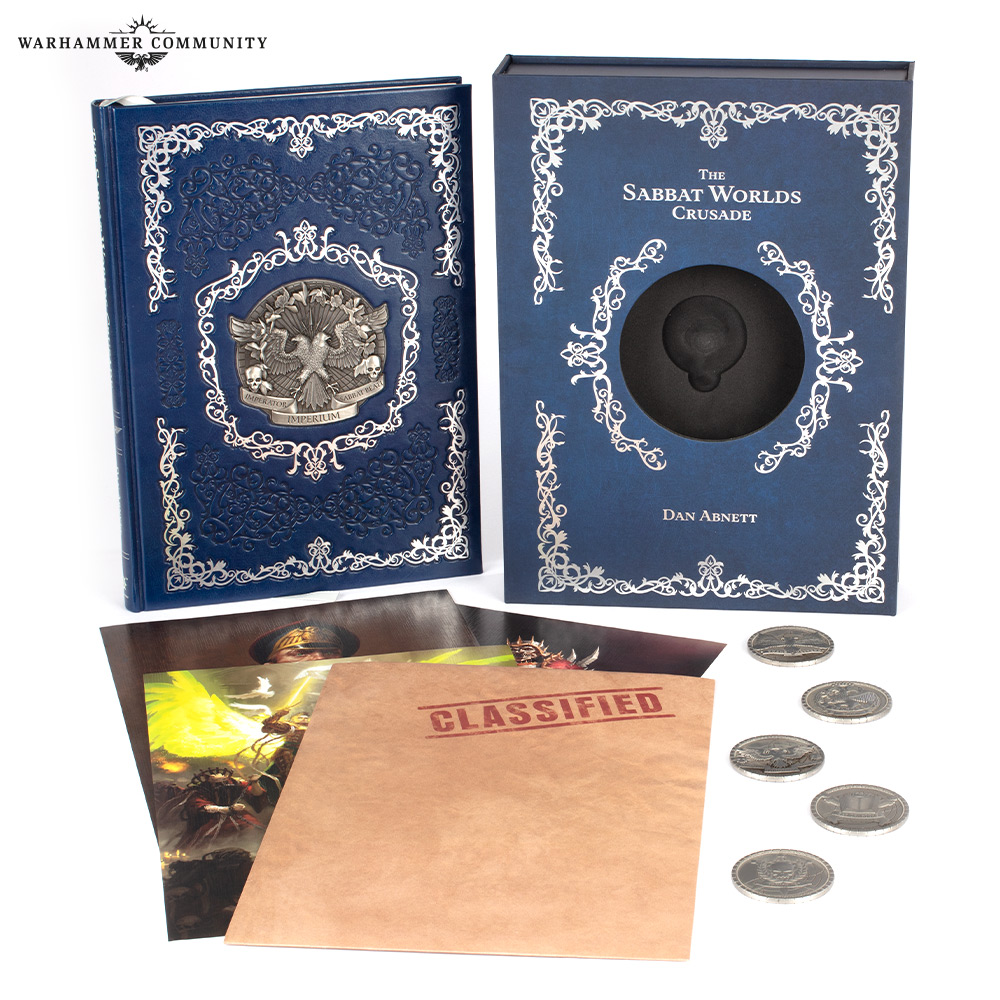 This in-universe reference book is packed with art and background covering the sprawling Sabbat Worlds Crusade. This limited-edition tome includes notes that add further depth to the lore, plus illustrations, maps, charts, and details about key theatres and conflicts in the campaign. If you’re a fan of Gaunt’s Ghosts, you don’t want to miss this companion guide.

Urdesh: The Serpent and the Saint 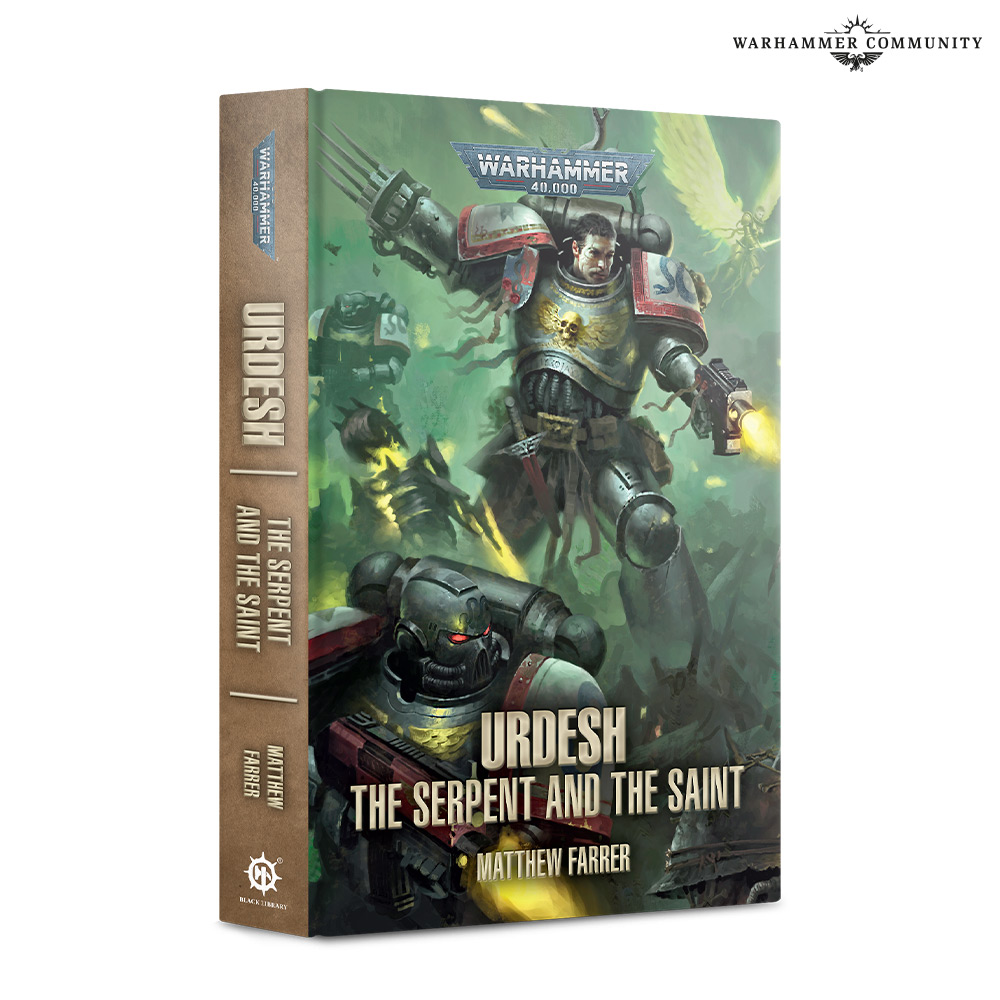 The next chapter in the ongoing Sabbat Worlds saga focuses on Urdesh. Here, the Iron Snakes are on a mission to prevent a potent living weapon from falling into the hands of the Anarch. The fate of the entire crusade hangs in the balance. In the end, will it all have been for nothing? 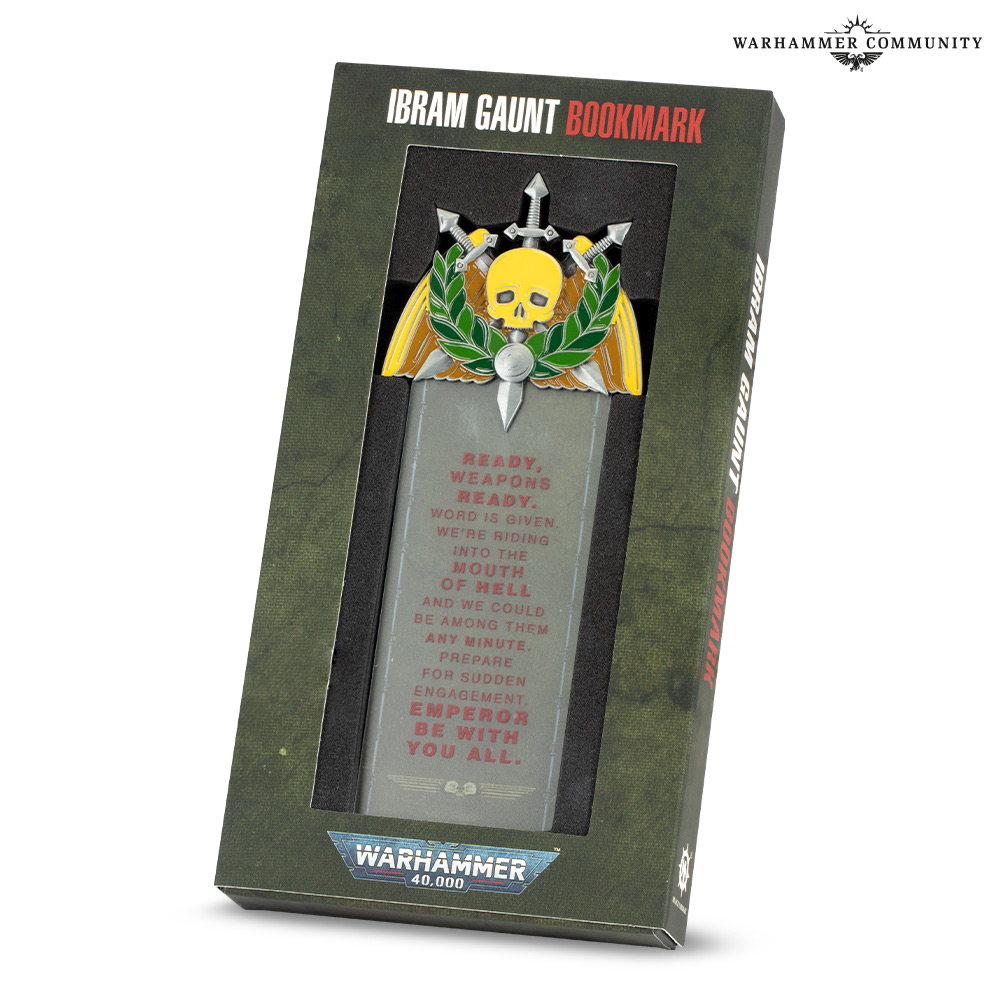 We’ve got one more special item to top off the Gaunt’s Ghosts reveals.

Though Dan Abnett is known to pen absolute page-turners, you MAY have to put your book down from time to time. What better way to save your spot than with this collectible bookmark? Show your support for Colonel-Commissar Ibram Gaunt and the heroic soldiers he leads to battle.

Talking of Dan Abnett, we asked the creator of these characters to share his thoughts about Gaunt’s Ghosts and the Sabbat Worlds, and he kindly obliged.

You can feel the weight of the setting, alongside the care and thought that’s been put into every aspect of the ongoing campaign. We have to take a moment to thank Dan for creating such an enduring and memorable cast of characters that mean so much to so many fans of Warhammer 40,000.

Elsewhere in the Sabbat Worlds… 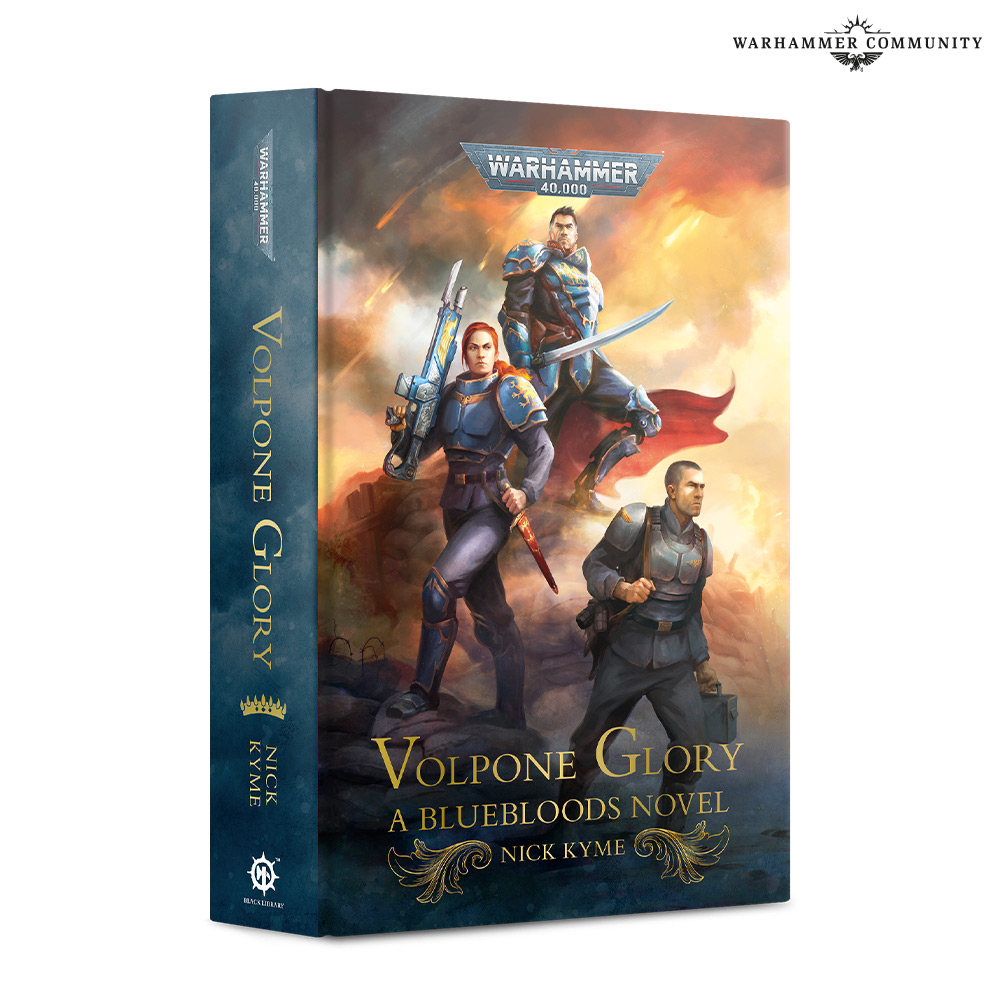 The Volpone Bluebloods take on the Blood Pact in a brutal grind to liberate Gnostes as war rages across the Sabbat Worlds. What seems like a fairly direct campaign is complicated by mounting casualties and the unfathomable machinations of the enemy. The Volpone must prevail, through glory and honour.

Meanwhile, back in the dark depths of the 31st Millennium, the cataclysmic siege of Terra is nearing its conclusion. 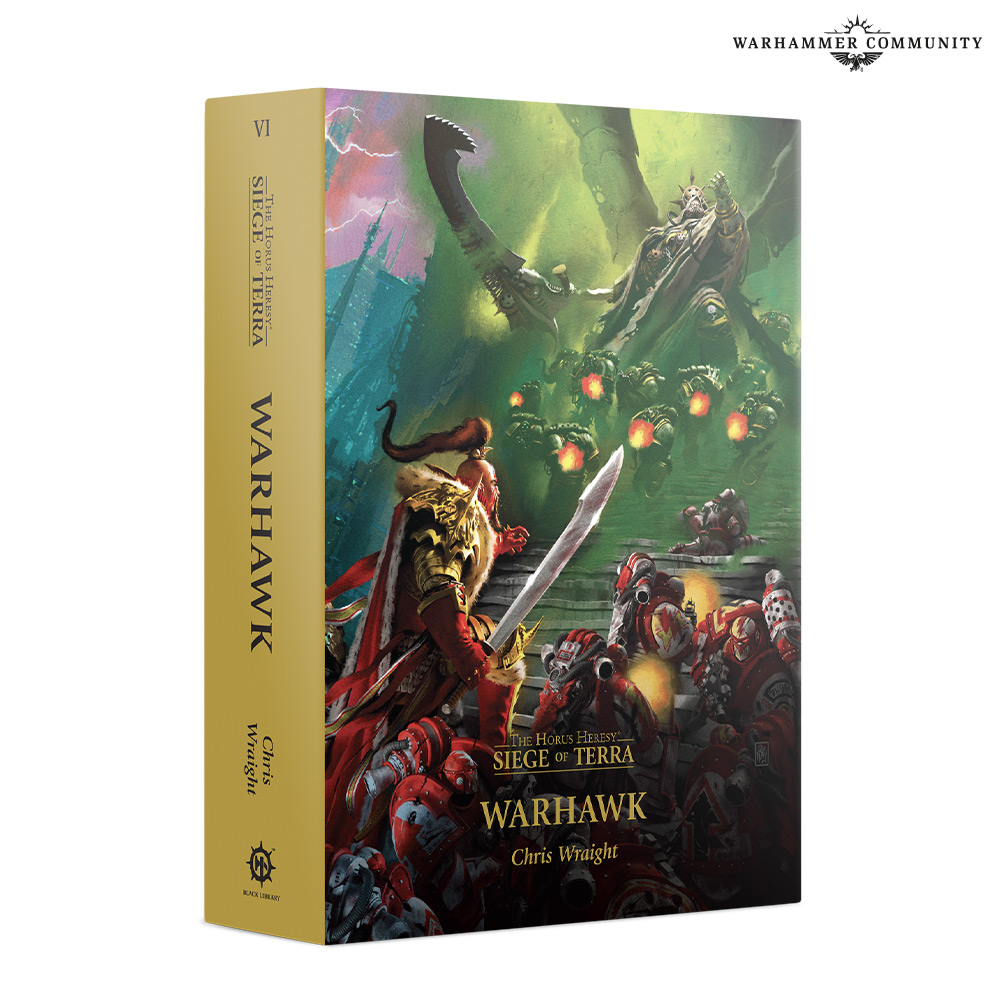 The siege enters a frantic new phase as the Traitor vanguard nears the heart of the Palace. The defenders abandon caution, launching desperate gambits to hold them off for as long as possible. Jaghatai Khan, Warhawk of Chogoris, springs into action with a scheme of his own – a counter-offensive aimed at taking back the critical Lion’s Gate space port. He prepares to face down an old enemy, who’s now empowered by foul energies beyond understanding. The Warhawk knows that defeat could mean the end of his Legion and of Terra itself.

Looking for something a bit more noir?

Let’s head back to the sprawling nest of villainy, Varangantua, for the next few books from the ever-popular Warhammer Crime imprint. 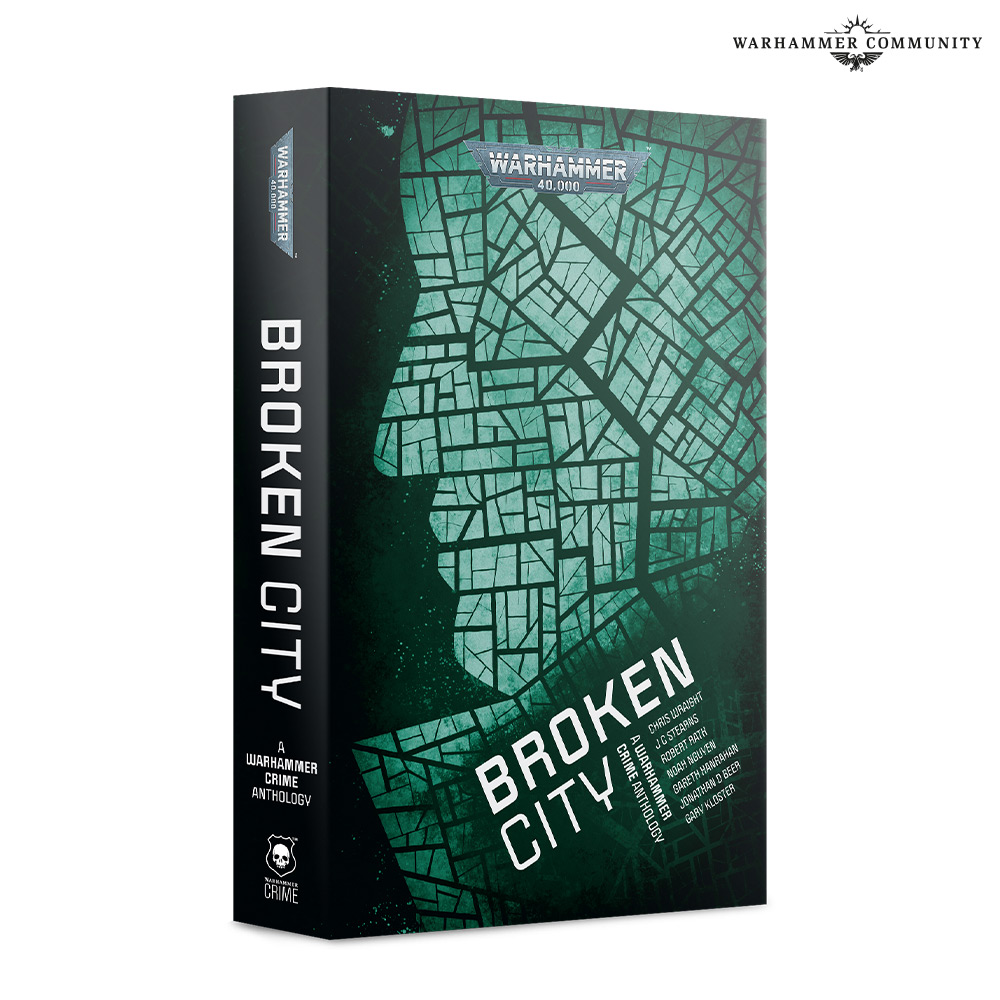 This anthology includes the novella Bleedout, along with six short stories concerning the dogged probators, brutal sanctioners, and ruthless gangers that call the crime-riddled, urban sprawl of Varangantua their home. 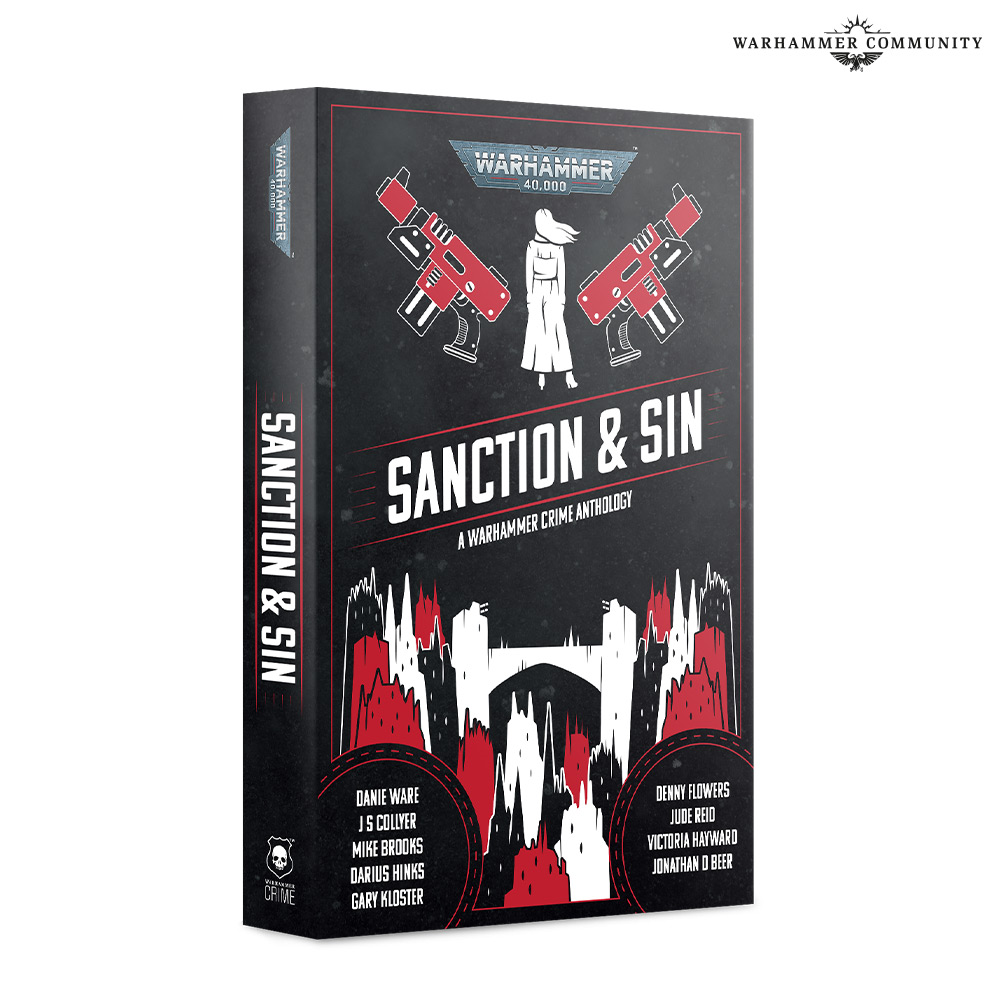 Another anthology brings together nine short stories from the rotten metropolis. You’ll read stories that explore everything from powerful syndicates, corrupt Enforcers, petty gangs, and the survivors who do what they must to make it through the daily struggle. 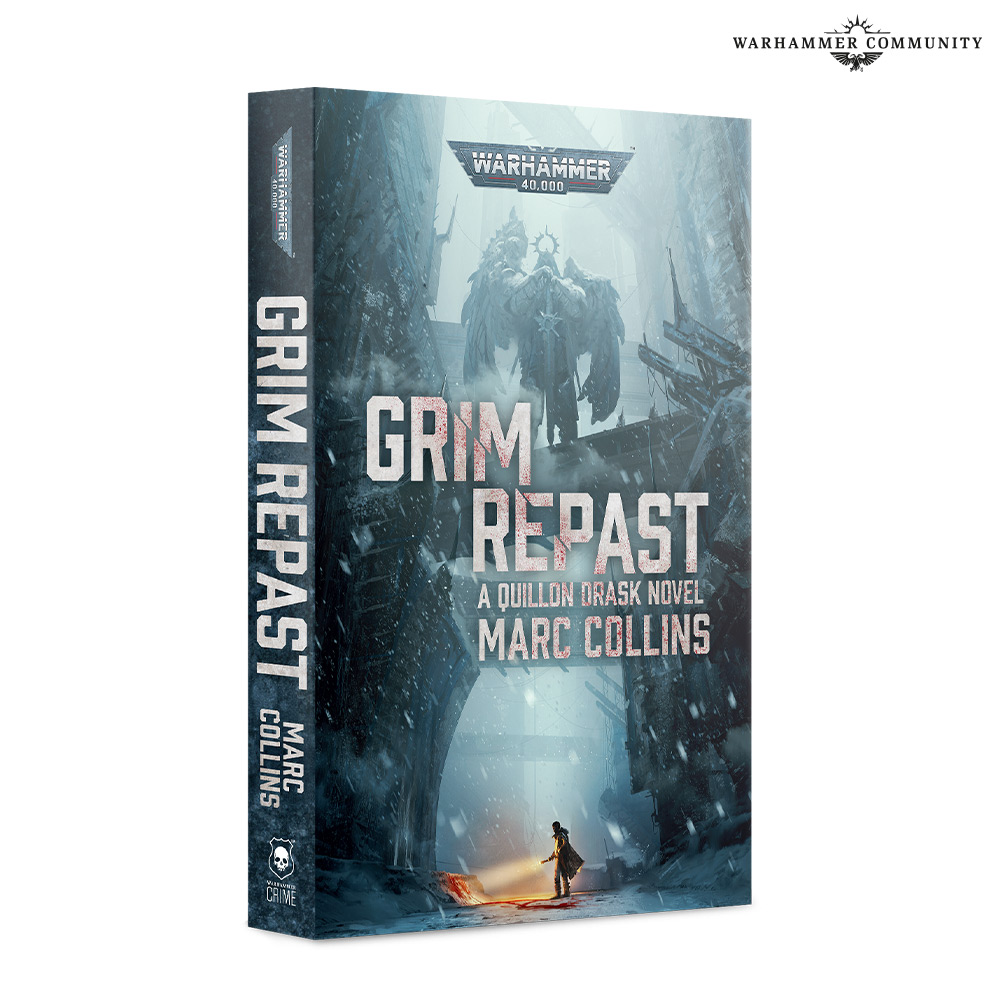 Probator Quillon Drask seems to attract the strangest cases – but nothing has prepared him for the blasphemous conspiracy he’s about to unravel. Now he must harness the twisted insight gleaned from his tortured past to bring the perpetrators to justice. 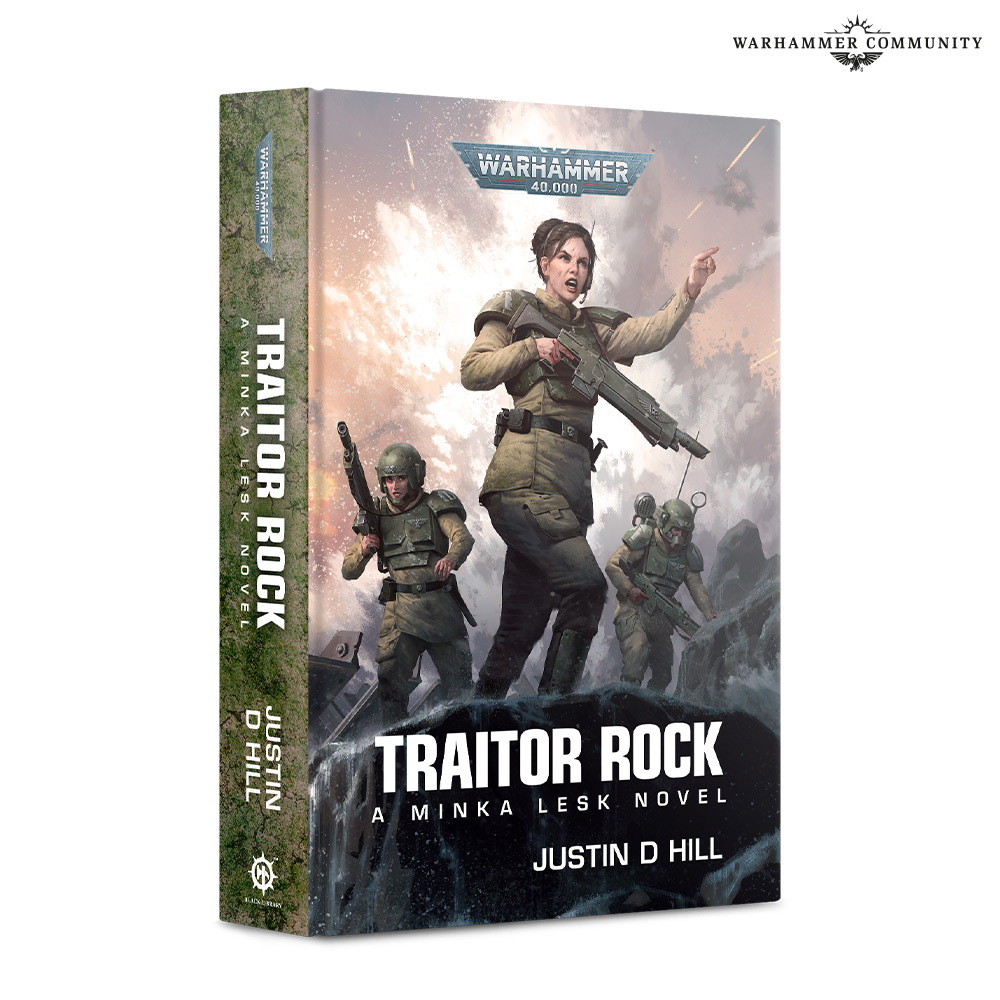 If you thought Cadia was going to let the shattering of their homeworld stop them, you must not be keeping up with the news. The Cadian 101st, led by Minka Lesk, is taking the fight to the traitors on Malouri. Will their faith and pride keep them fighting? Or will the meat-grinder siege break them down? 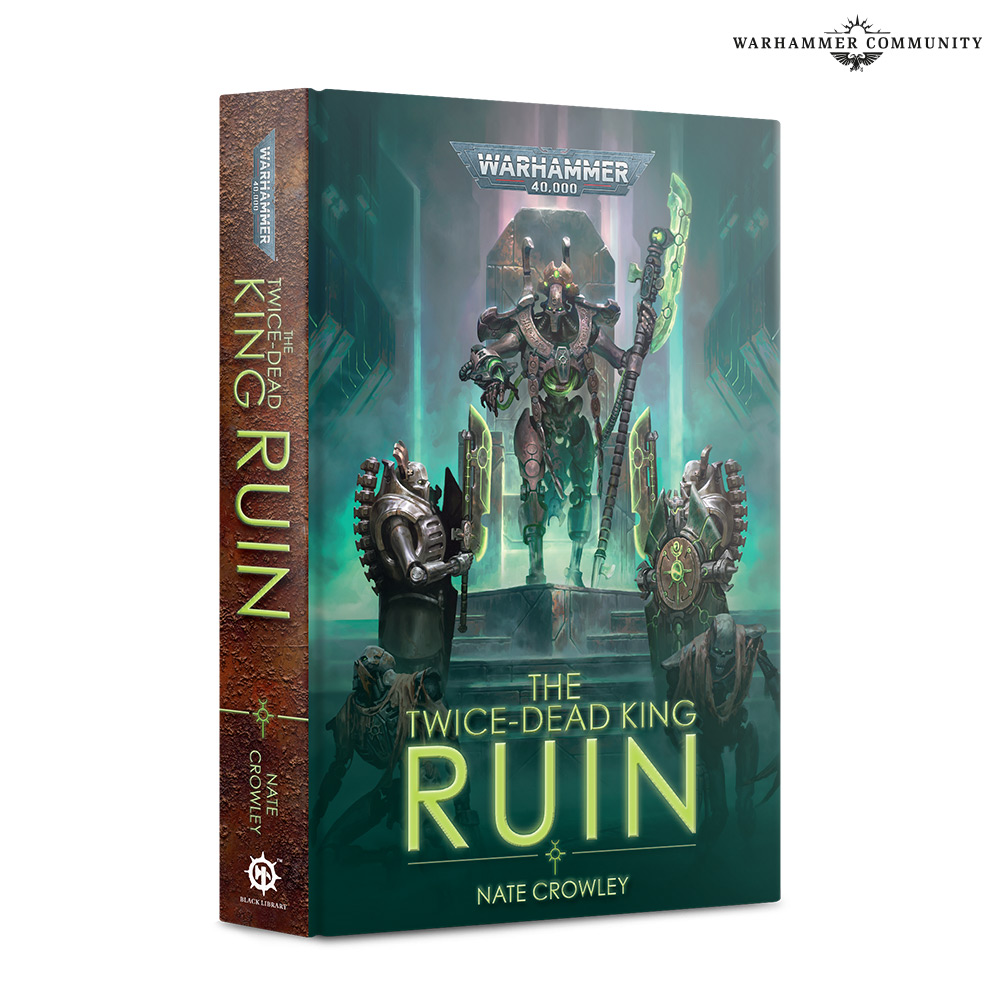 The disgraced necron lord Oltyx must overcome his bitterness and return to the very court that cast him out to bring news of an ork invasion. Expecting the worst, Oltyx discovers that the orks are the least of the horrors that face him and the entire empire of the necrons.

If you like the sound of this one, we can confirm there’s already a sequel in the works too. 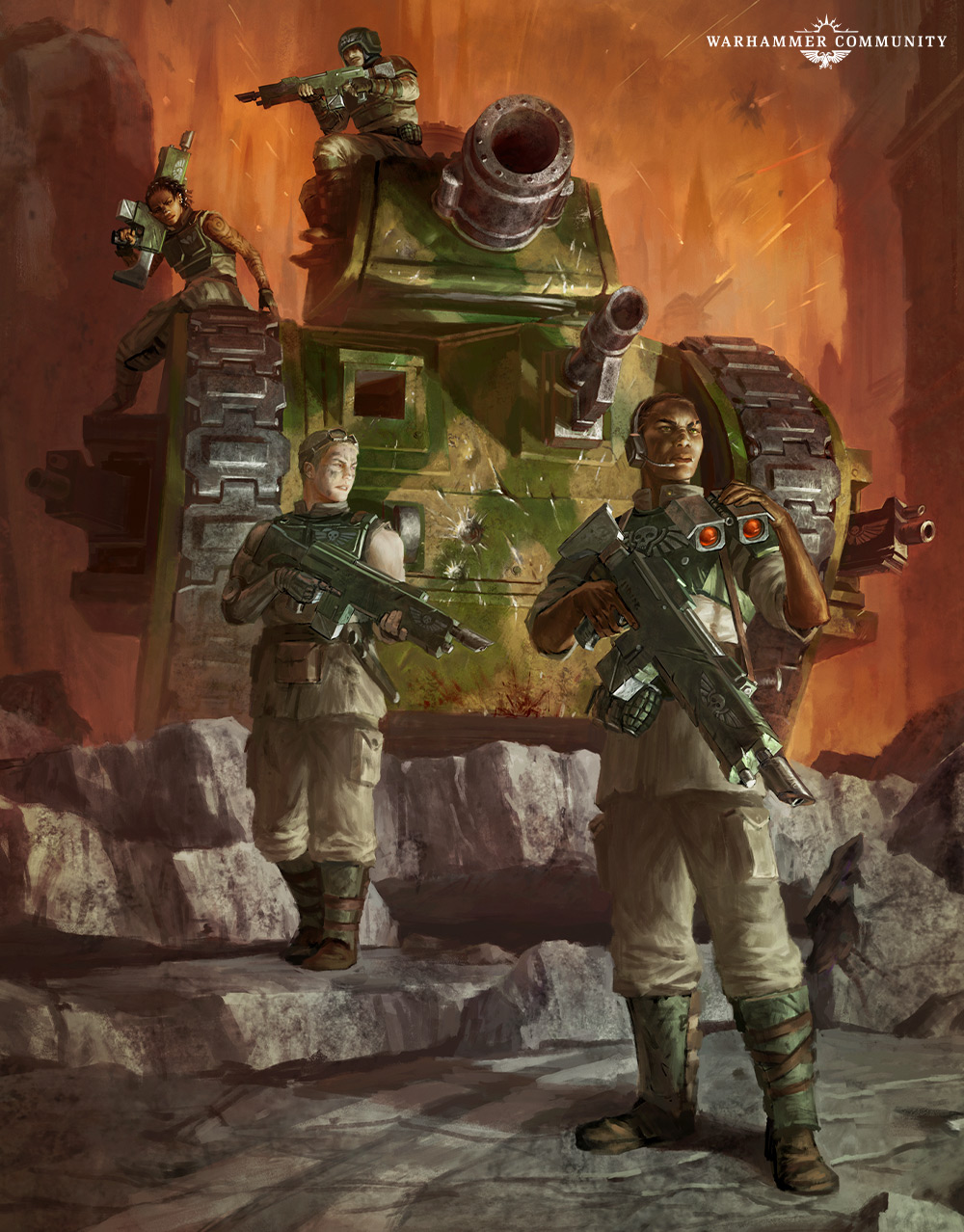 Head inside a mighty Leman Russ Demolisher, as an outsider takes command of a dysfunctional crew of Cadians. Faced with the fight of their life under the poisonous light of the Great Rift, the disparate team must learn to work together if they want to survive the conflict with the corrupted followers of the Ruinous Powers.

We’ll share more about these books very soon – keep an eye on the Black Library Coming Soon page and Warhammer Community for updates. If you haven’t already, sign up for the Black Library email newsletter for weekly news sent straight to your inbox. We want to hear what you’re looking forward to the most – head over to the Black Library Facebook page and tell us all about it.

Be sure to check back tomorrow at 6pm (BST) for yet more Warhammer 40,000 goodness.

Ever Wanted to Field an Entire Squad of Specialist Heroes? Gaunt’s Ghosts Have You Covered

Can’t pick your favourite Ghost? Don’t worry, these six are deployed as one powerful squad.

Having your home world destroyed is likely to put a dampener on anyone’s first day at a new job.