Who Are Those ‘Beast Snagga’ Gits, Anyway?

Listen up, boyz. We’z ‘ad sum right strange types appearin’ in da last few days, and I wanna know what they’z doing in my Waaagh! Last time you lot poked around one of them weird ladz, Bogrot’s ‘ead exploded, so this time we’z got sum captive ‘oomies to find out wot they’z up to in a new regular series on the Waaaghammer Comoonity site: ‘Ere we go!

As you’ll have no doubt seen in the recent Warhammer Preview Online, followers of a new greenskin ‘subkultur’ have arrived to bring their own brand of krumpin’ to the galaxy. Called the Beast Snaggas, these master squig-breeders ride to war on their ferocious red steeds,* kicking, biting, and stabbing anything within their reach. 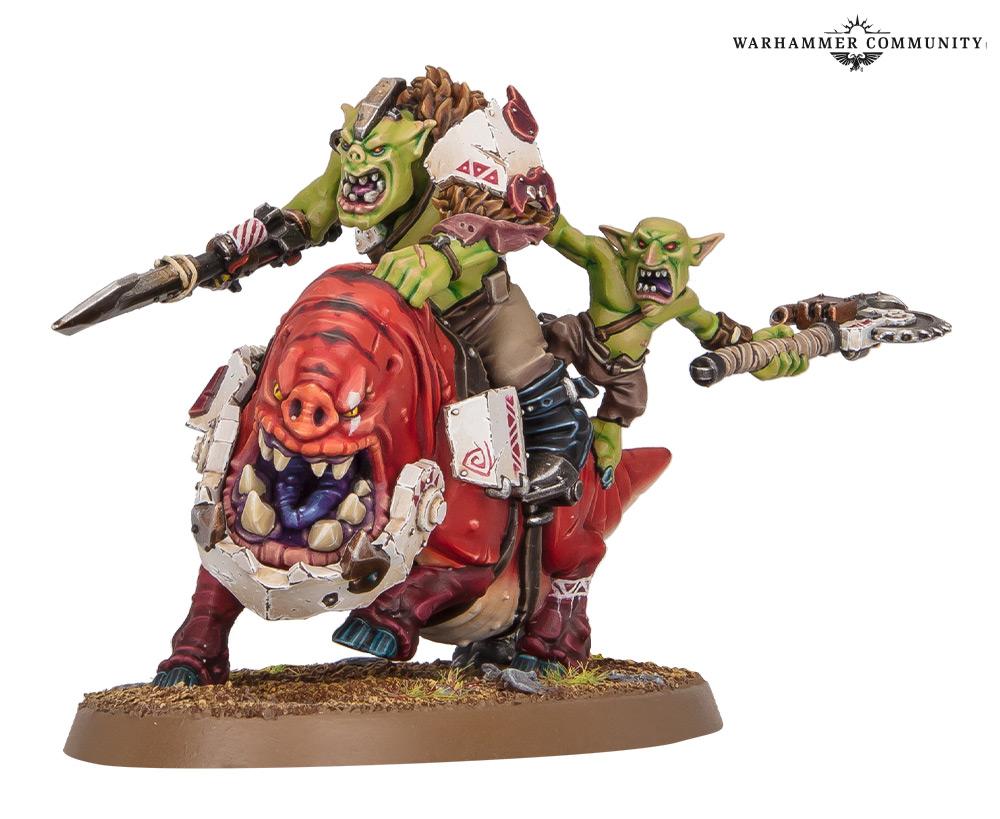 Just because they eschew the trukks and bikes of their Speed Freek cousins’ armies, doesn’t mean the Beast Snaggas are averse to using some of the local Mekboyz’s creations. Think of them as pro-squig, rather than anti-thinkin’. After all, it’s rare to find an Ork who wouldn’t appreciate how you can make a humble spear louder and killier by adding rocket boosters to it. 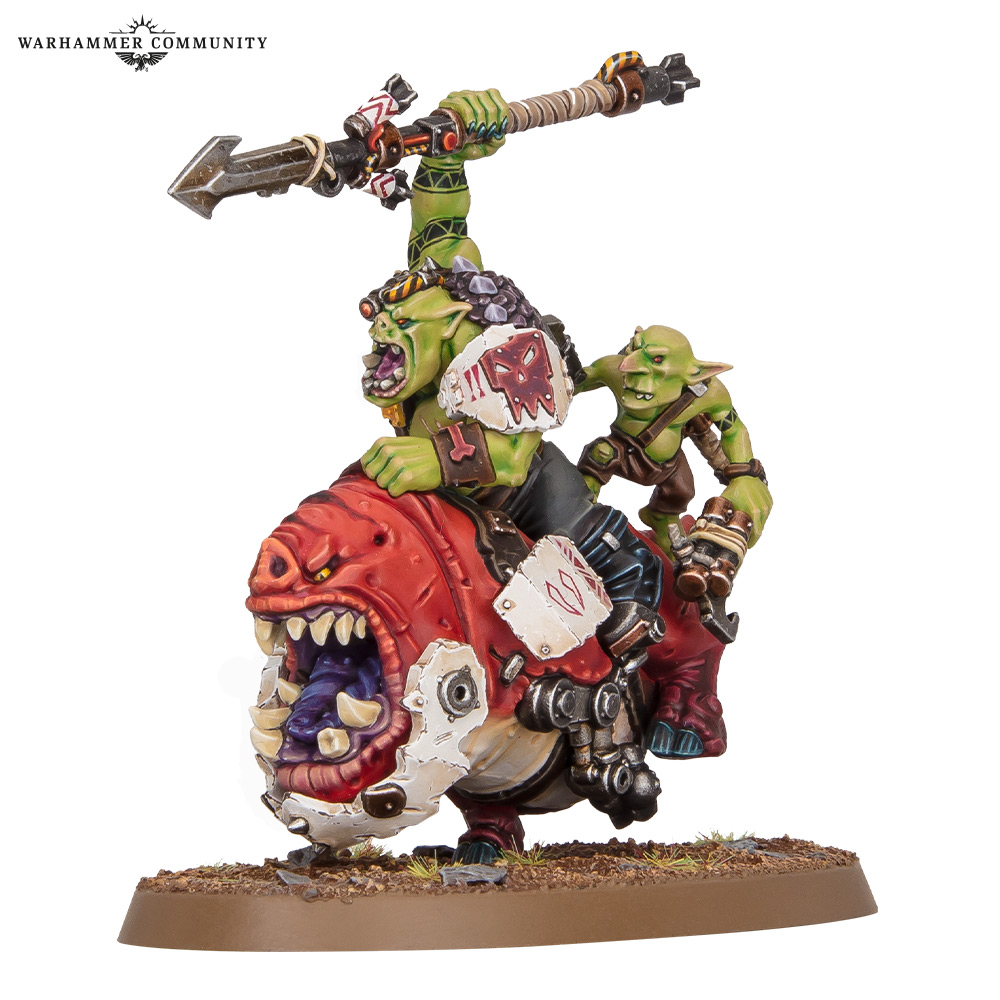 Their appreciation for ‘da old ways’, and their disregard for more complex Orky technology, leads many of the Snakebite clan to become Beast Snaggas, although their ilk can be found across the entire spectrum of Ork society.** Even a no-nonsense Goff can look at a squighog’s shockingly large teeth and figure out how best to apply them to some poor git’s face. 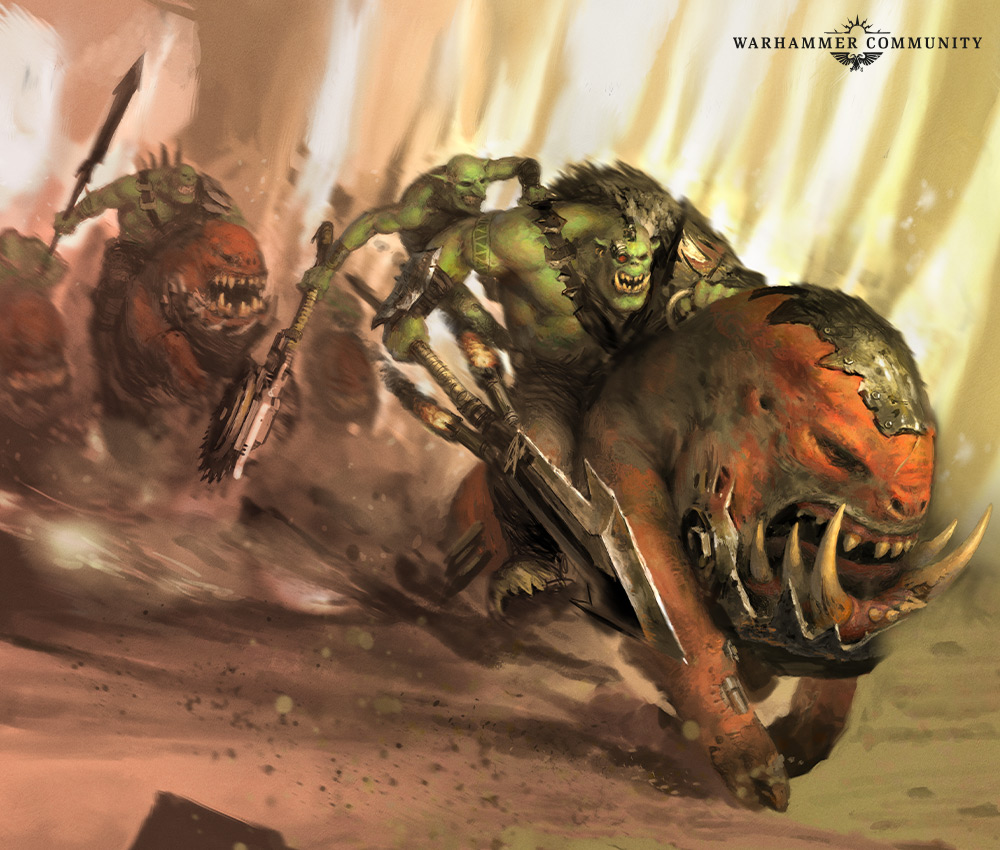 The Beast Snagga boyz themselves are hulking mountains of muscle even by regular Ork standards – spending a lifetime chasing down and grappling with ravenous beasts breeds particularly hardy individuals. Even their Gretchin underlings are a smidge braver than usual,*** as those affectionately dubbed ‘saddlegitz’ hold on for dear life and take whatever swings they can.

Stay tuned to learn more about the savage Beast Snaggas and the ingenious ways they use giant, red mouth-monsters. In the meantime, prepare for the Waaagh! by grabbing some of their Speed Freek rivals in a Boomdakka Snazzwagon or Shokkjump Dragsta. You can even bridge the gap between the two subkulturs with a Rukkatrukk Squigbuggy – although knowing the Orks, they’re just as likely to fight both sides.

Don’t forget, there’s a wealth of Orky stories for you to brush up on too. Just ask Makari – he’ll tell you exactly what you should be reading right now.

** If such a thing really exists.

Turns out squigs can be used for just about anything, if you’re brave enough.

‘Ere We Go is back with a first look at some new Ork rules for the ‘humble’ Boyz.

‘Ere We Go is back with a look at another new Beast Snagga.