Sunday Preview: Snotlings on the Pitch, Blades in the Underhive 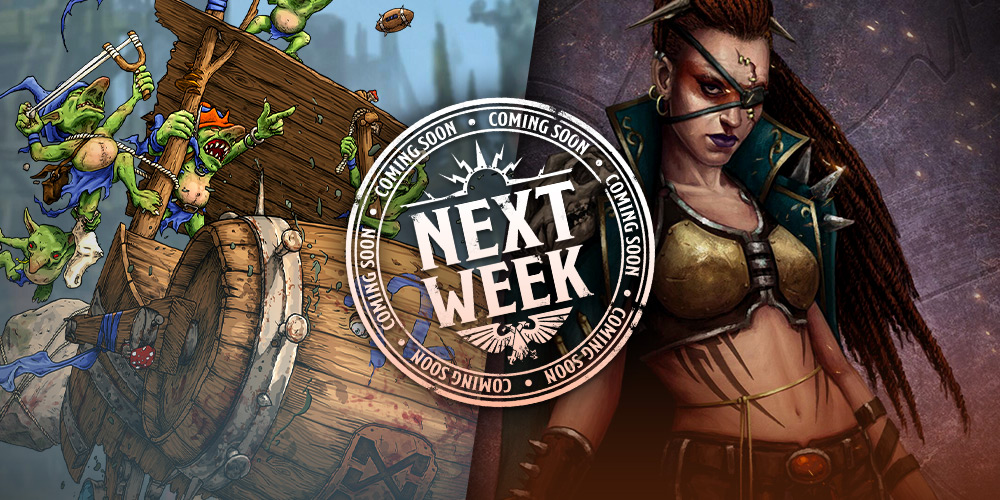 Next week is going to be another epic one in the worlds of Warhammer with new releases for Necromunda, Aeronautica Imperialis, the Middle-earth Strategy Battle Game, AND Blood Bowl. Before we bring you the details, take a look at the highlights of the week ahead.

In the underhive, it’s time for the Escher gangs to have their moment in the spotlight with the release of House of Blades. This book is the ultimate guide for all things Escher, featuring the definitive history of the house, rules for fielding an Escher gang in games of Necromunda, and new Dramatis Personae. There are also rules for Hired Guns, Hangers-on, and Brutes for every gang, along with some Escher-specific ones. This tome lets you form new alliances, while also containing gang-specific tactics. If you’re a fan of House Escher, or just want to explore the storied history of Necromunda, you’ll want to get your hands on this. It’ll be available in hardback and ePub versions. 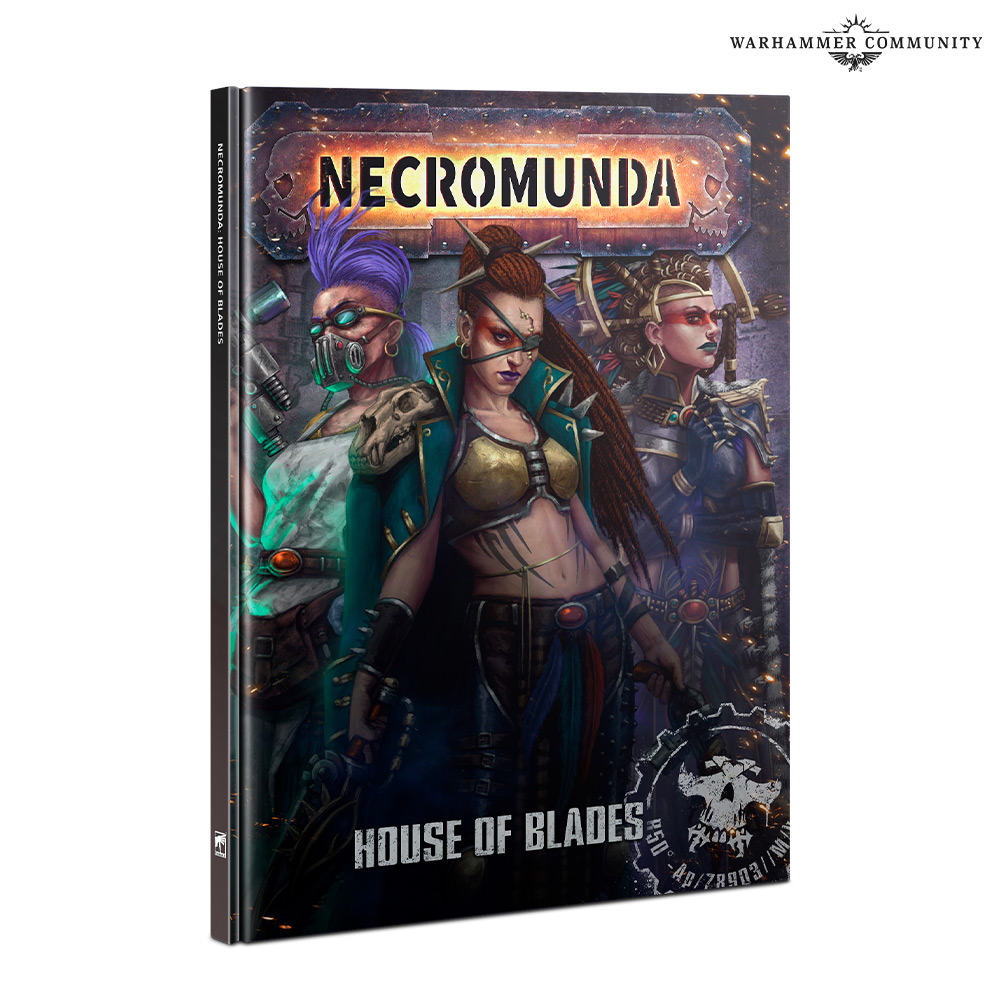 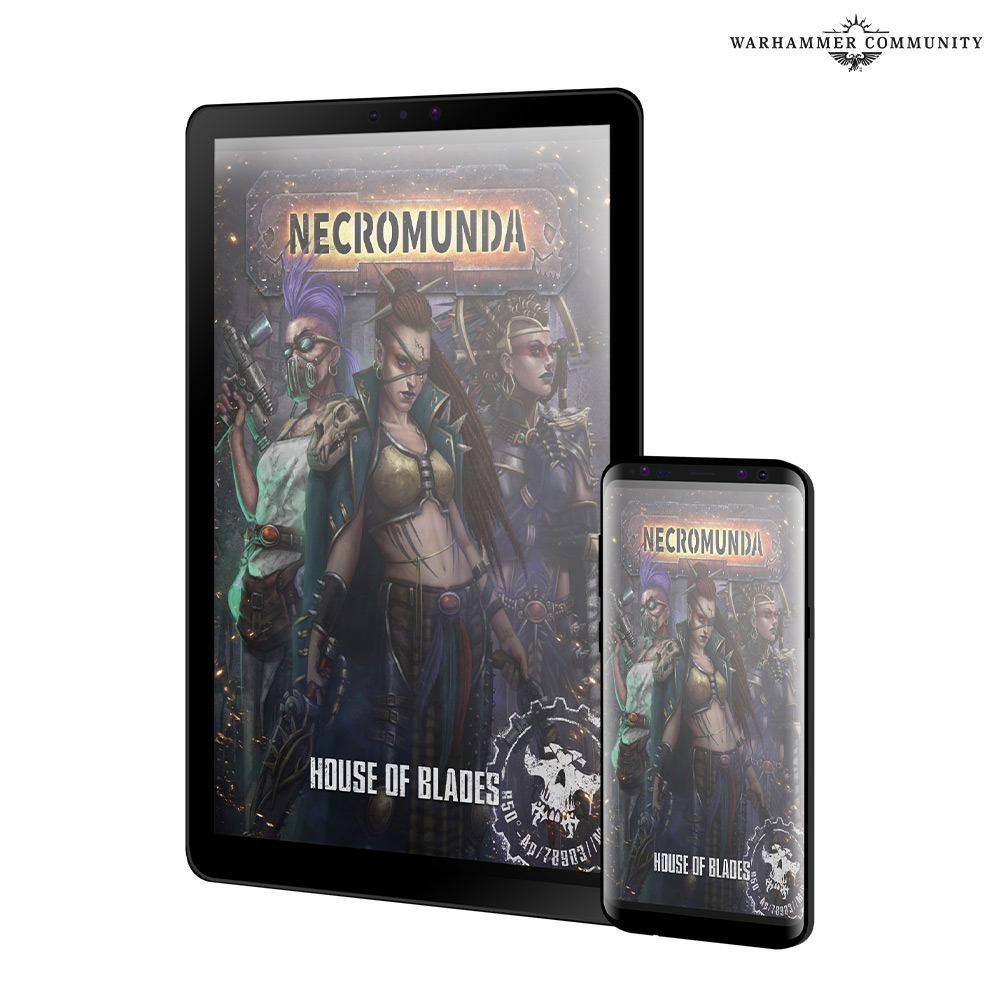 Along with the new book come extra fighters for Escher gangs in the form of Death-maidens and Wyld Runners. The Death-maidens are gang Champions that have been raised from the dead to claim vengeance in the name of House Escher, while Wyld Runners are reckless and bold Prospects seeking to prove themselves in the gang. The new box lets you build two Death-maidens, four Wyld Runners, and four Phelynx, – vicious creatures that sometimes accompany Wyld Runners. With a range of new weaponry, including venom claws and wyld bows, these new fighters will add even more flexibility into your Escher gangs, enabling you to spread your poisons to the furthest reaches of the underhive. 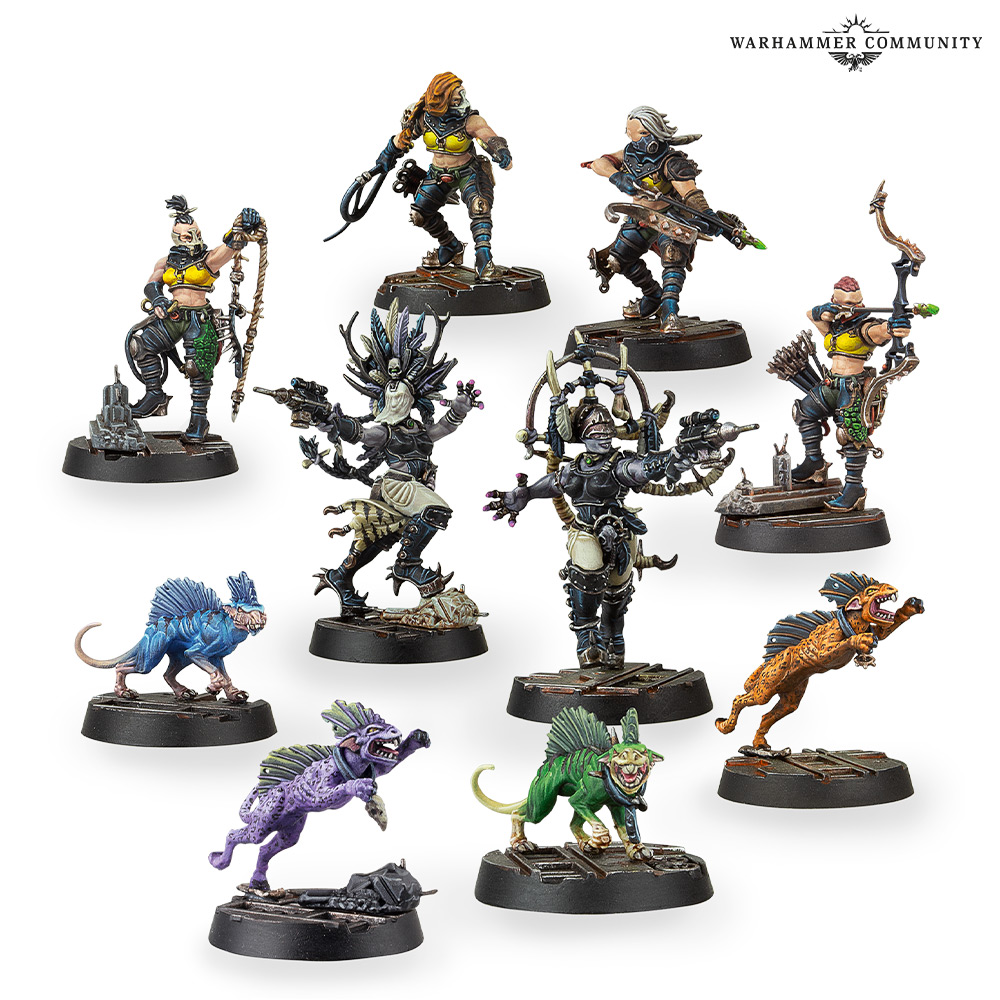 If you’re looking for something a bit slower and stronger than the Eschers, look no further than the Slave Ogryns. Introduced as a gang in the House of Chains book, you can now field them in your games of Necromunda thanks to this new kit. The six Ogryns, armed with augmetic fists, storm welders, and spud-jackers, will prove that in the underhive, might makes right. Also included in the kit are options to make a Lobo-slave and an Ogryn with just one arm. 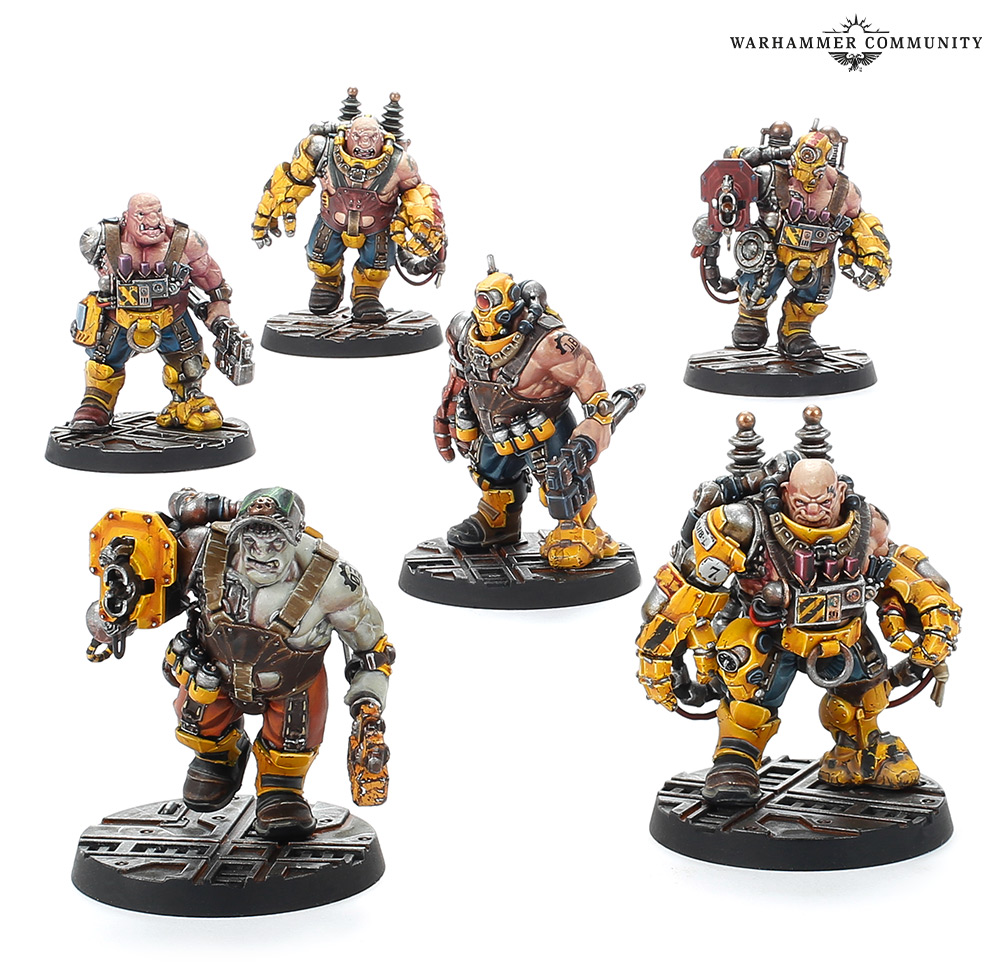 If you want to expand your Slave Ogryn gang, or include an Ogryn as a Brute for any gang, you can also pick up the Jotunn H-grade Servitor Ogryns box. It makes two Ogryns and contains the same options for heads, weapons, and bodies as the larger kit above, so it is perfect for expanding the strength of your underhive forces.

Four new card packs are also on their way for Necromunda. Tactics packs for the Escher and Ogryn Slave gangs will make it easy for you to keep track of your fighters and gang-specific strategies, with each including 18 gang-specific Tactics cards and 8 blank Fighter cards. Meanwhile, the Necromunda Open Hive War Card Pack allows you to generate missions for your games simply. Between Deployment cards, Objective cards, Loot cards, and Peril cards, there are thousands of combinations, meaning that you’ll never have to play the same game twice. The Zone Mortalis Gang Tactics Cards add even more strategic options for you in the underhive. With 12 gang-specific* cards and another 12 usable by any gang, you’ll be able to take control of your surroundings and emerge victorious. 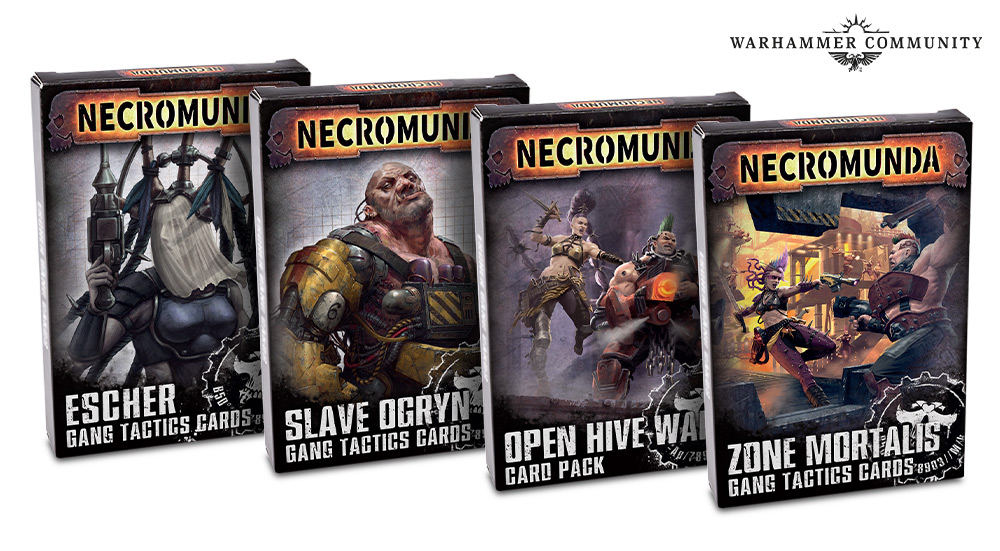 Finally, you can declare your allegiance to either the House of Blades or the House of Chains with these two gang-specific dice sets. Containing three D6s, two ammo dice, two injury dice, and a scatter dice – these are all the dice you need to dominate the dark corners of the underhive. 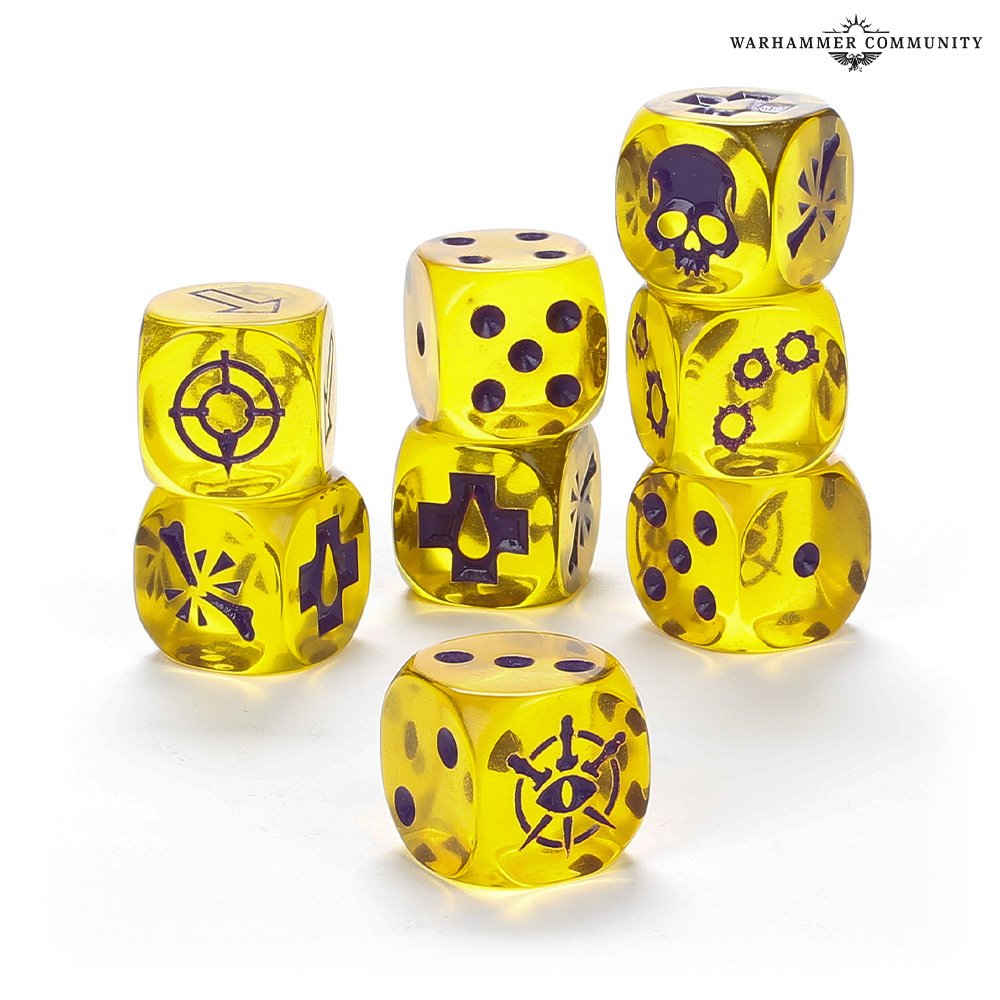 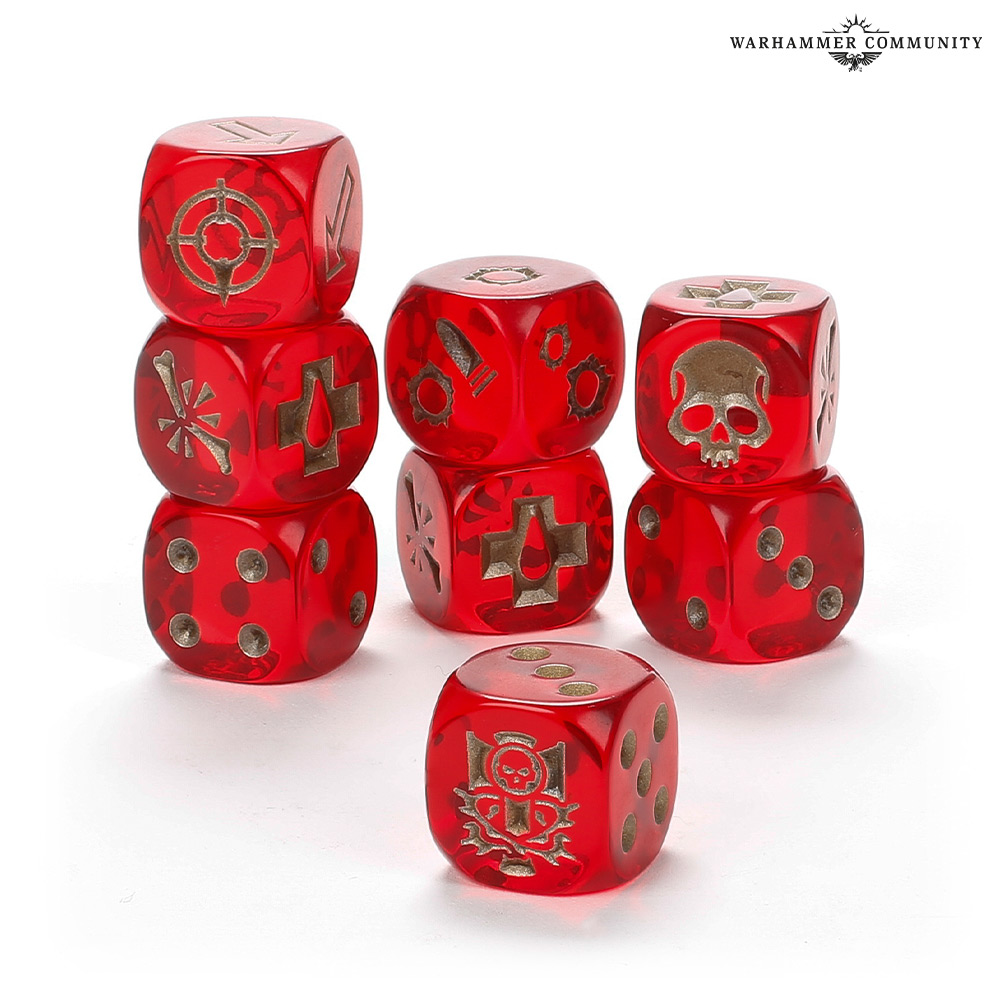 Of course, we can’t guarantee that they’ll be lucky – luck can be very fickle on Necromunda.

One of Rohan’s most famous warriors is getting a new plastic model for the Middle-earth Strategy Battle Game next week! This impressive kit for Éomer, the legendary Marshal of the Riddermark, allows you to build him on foot and mounted. It also includes options for the horse to be unarmoured or with scale mail barding, and the warrior himself can be equipped with a spear, sword, or shield, and there’s the choice for him to be wearing a helmet or not.** 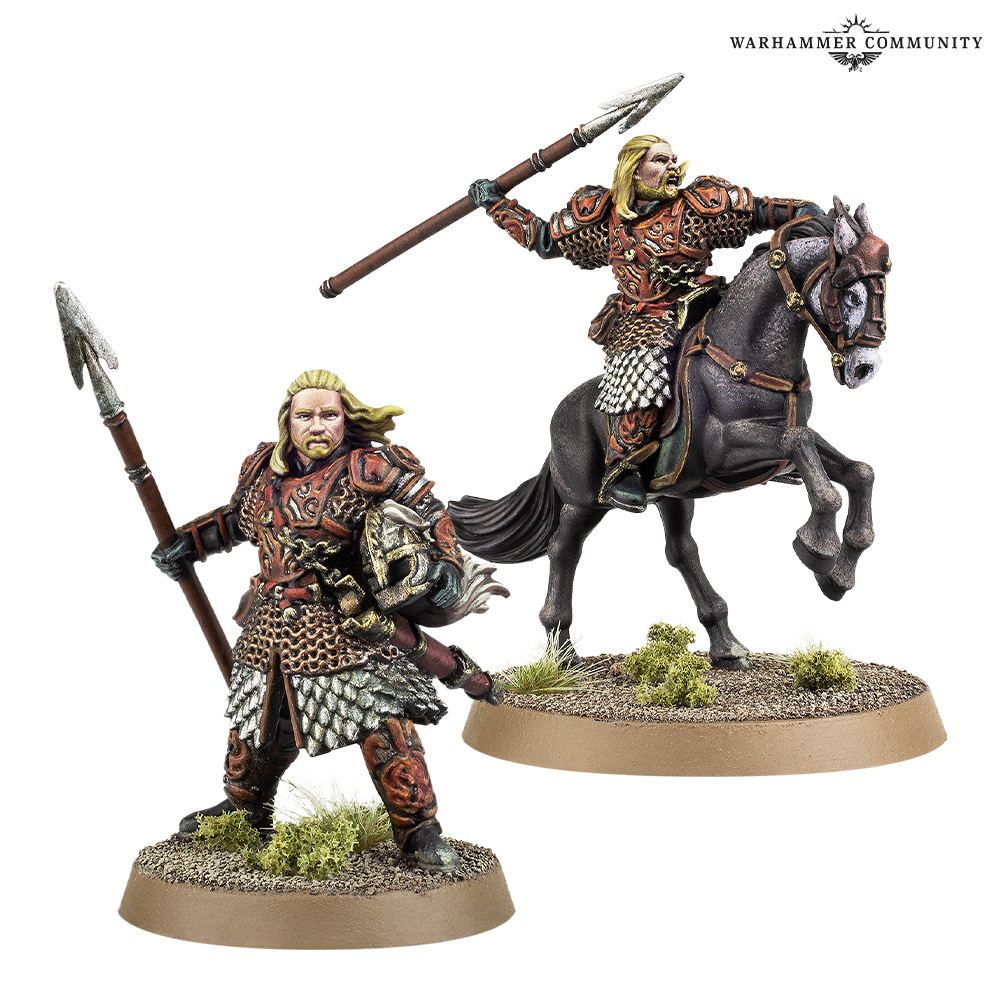 However you choose to field Éomer, he is an excellent Hero of Valour for your Rohan forces.

Also coming next week is Middle-earth Strategy Battle Game: The Best of White Dwarf. Games Workshop’s monthly magazine has been covering the game in its various forms for almost 20 years, and this book collates an incredible selection of those articles. 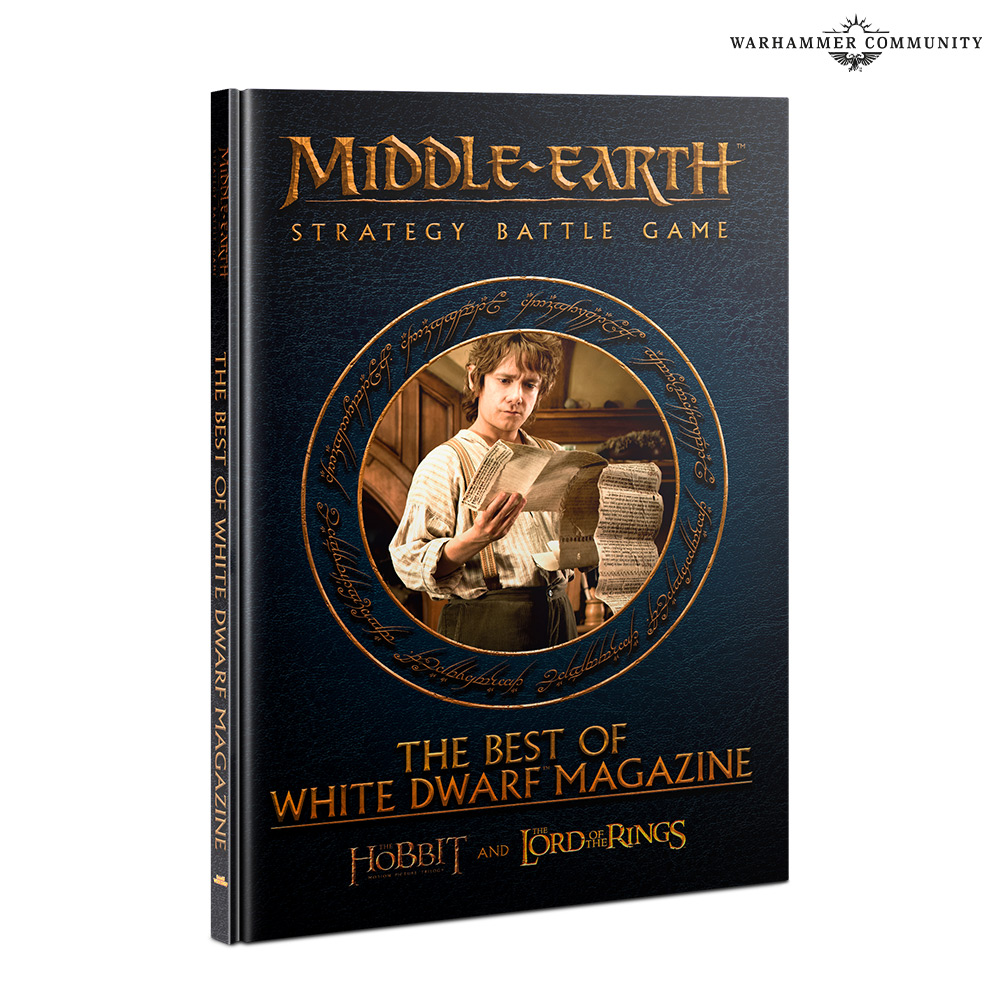 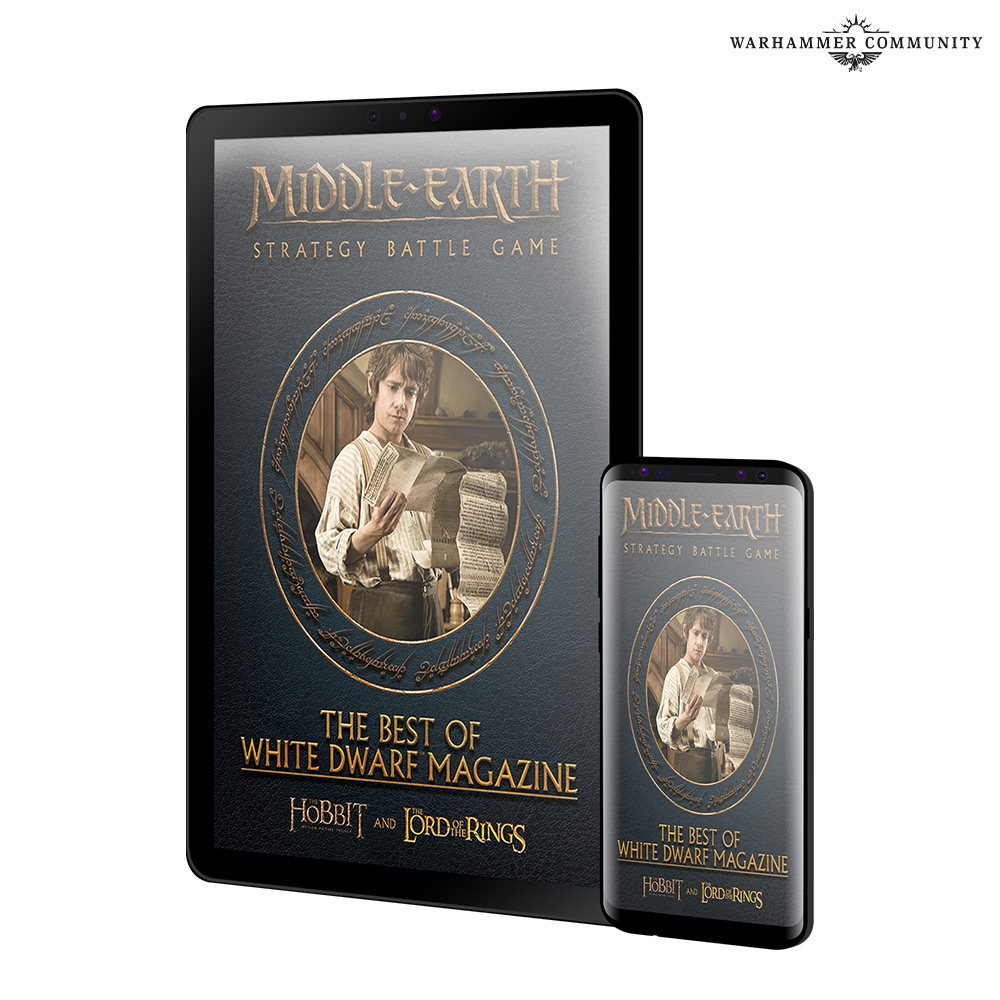 From scenarios to battle reports, and from painting guides to tacticas, this book is ideal whether you’re a new player or simply want the convenience of having all of these articles in one place. It is available in hardback and ePub versions.

A new aircraft is swooping in for the Imperial Navy in the form of the Avenger Strike Fighter. Designed as a ground attack aircraft, the Strike Fighter’s main armament is its massive avenger bolt cannon – ideal for punching through the weaker top and side armour of enemy vehicles.*** Of course, such a big gun also makes it incredibly useful against enemy air targets too! 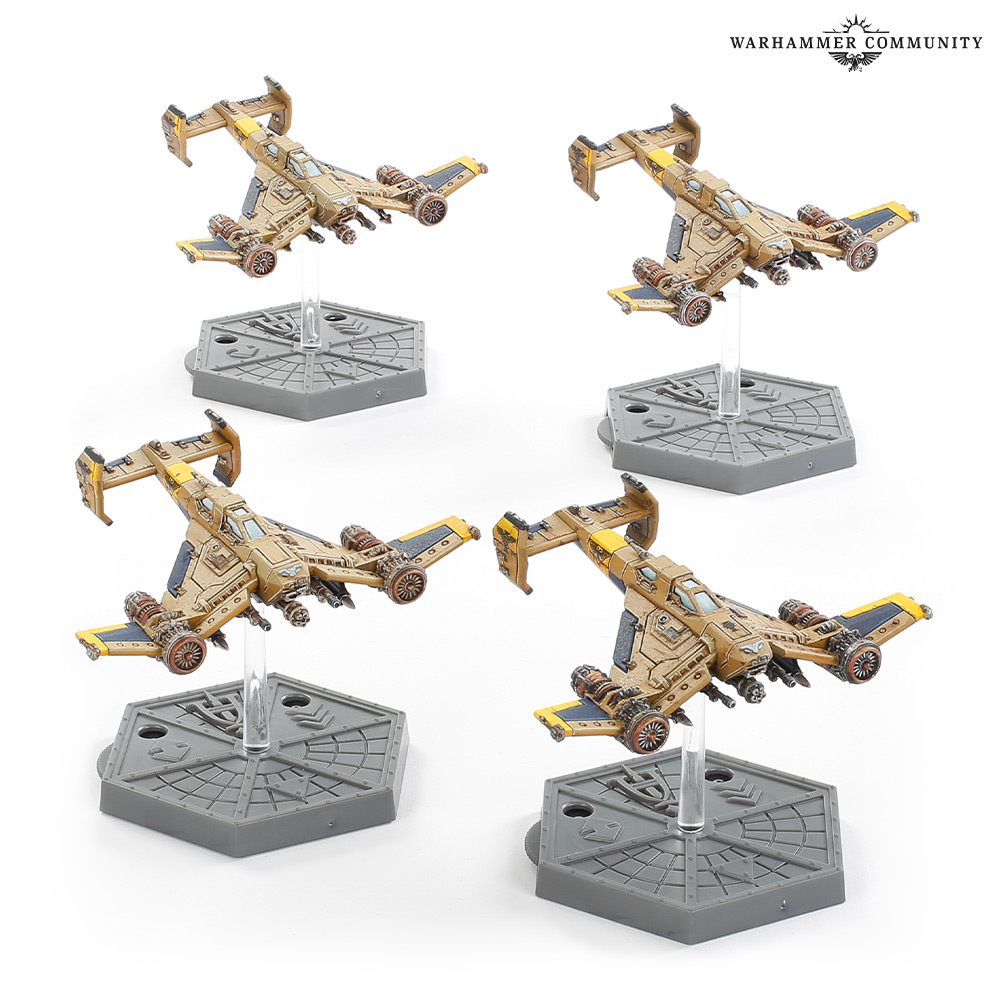 The new kit includes four of these destructive aircraft and also features optional lascannons, autocannons, hellstrike missiles, and skystrike missiles so you can select the right tools for the right mission. Pair them with some Thunderbolt or Lightning fighters, and you’ll have a squadron to strike fear into the hearts of your foes.

Last, and most certainly least, is the new team coming to Blood Bowl – the Crud Creek Nosepickers! As players, they aren’t very fast, they aren’t very tough, and they aren’t very smart. You might think that this makes them ill-suited to the game of Blood Bowl, and you’d be right. But if Halflings can play, then why not Snotlings?**** What they lack in size and skill, they also lack in any other attribute that may be beneficial in a game of Blood Bowl. At least they come with a couple of Pump Wagons, a couple of Fungus Flingas, a pair of Fun-Hoppas, and two Stilty Runnas. If you’re a Blood Bowl coach looking for a real challenge, then look no further than this delightfully characterful Snotling team. Just look at ‘em – they’re definitely having a great time, and so will you! 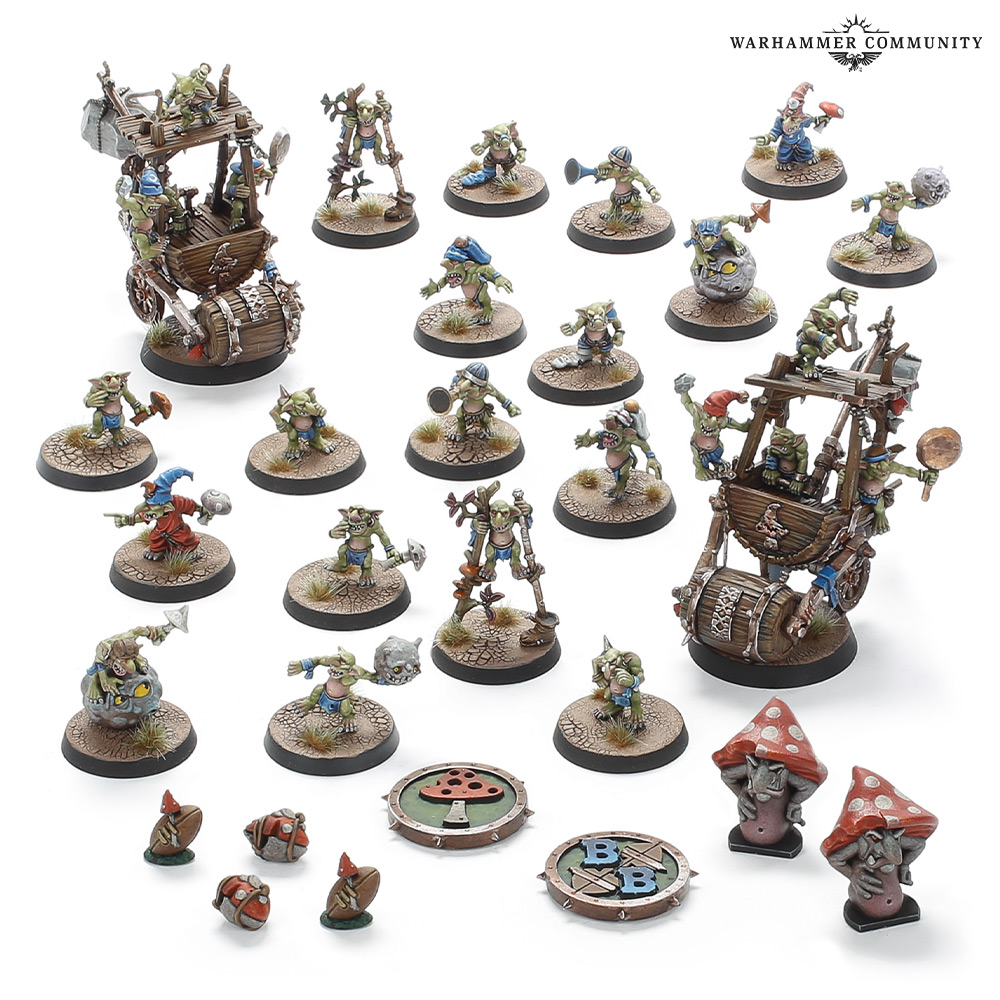 The rules for using a Snotling team in games of Blood Bowl can be found in Spike! Journal Issue 10. Along with all the Snotling stats you’ll ever need, there is a history of the little green creatures in Blood Bowl, a look at some of their most famous teams, star player spotlights, and more. It’s snot to be missed – get Spike! Journal Issue 10 in a standard 36-page softback magazine format and digital ePub editions. 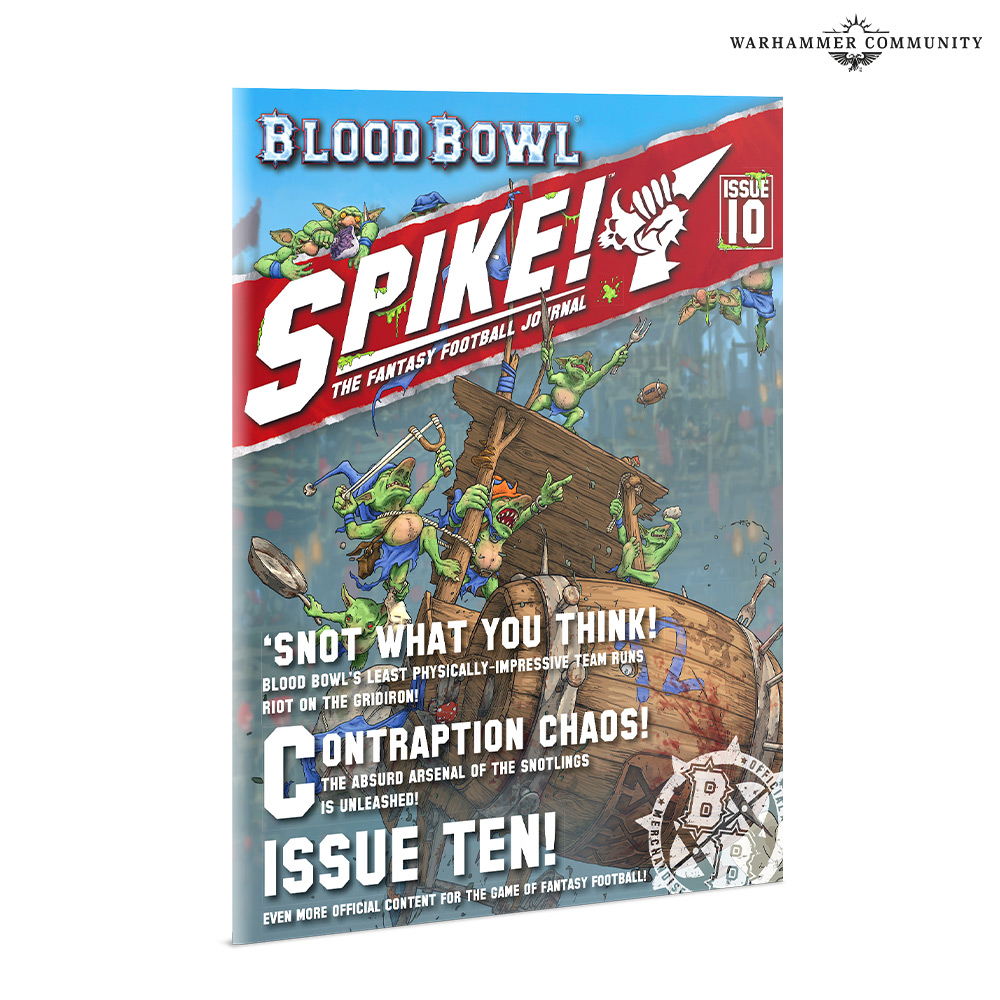 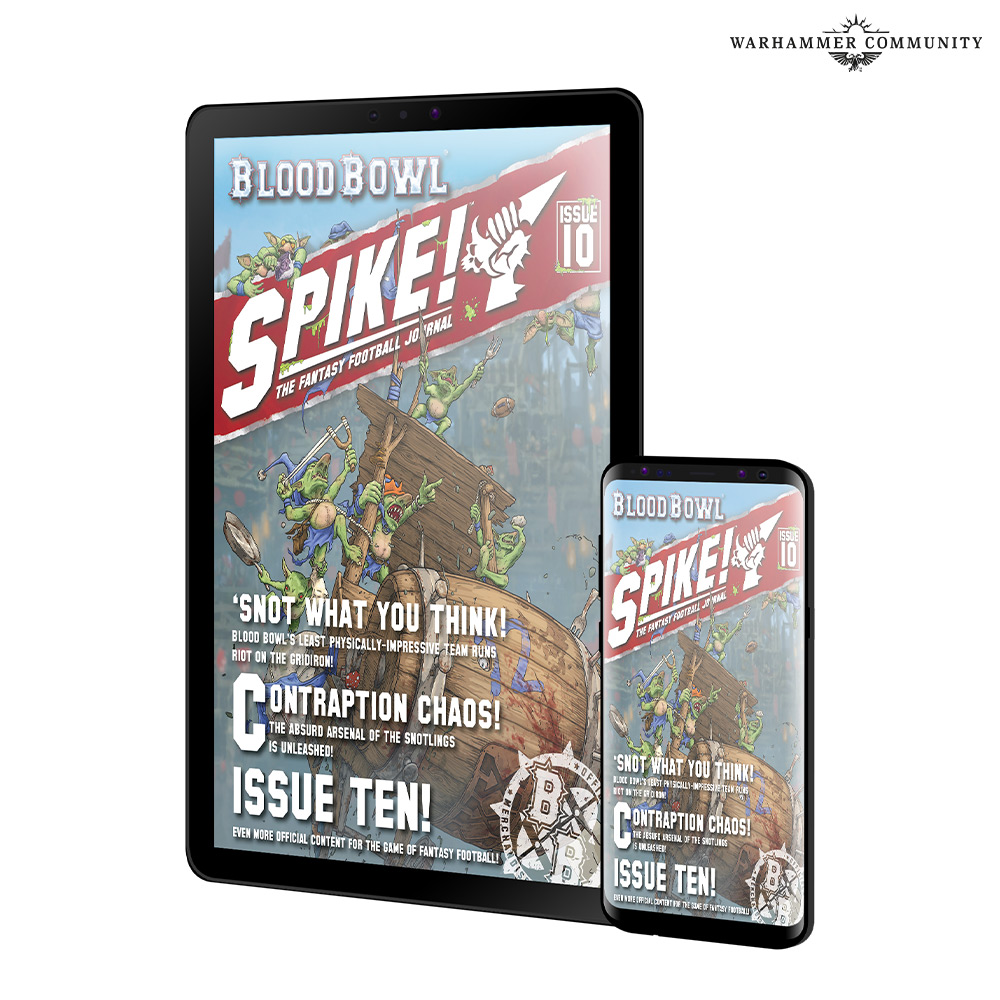 With this team, you’re going to need all the help you can get, so make sure you also grab the Snotlings’ tactics cards, dice, and pitch. By showing your true dedication to the little guys, maybe Nuffle will smile down on you, and you’ll be able to mug an opposing player or two without the Ref noticing… 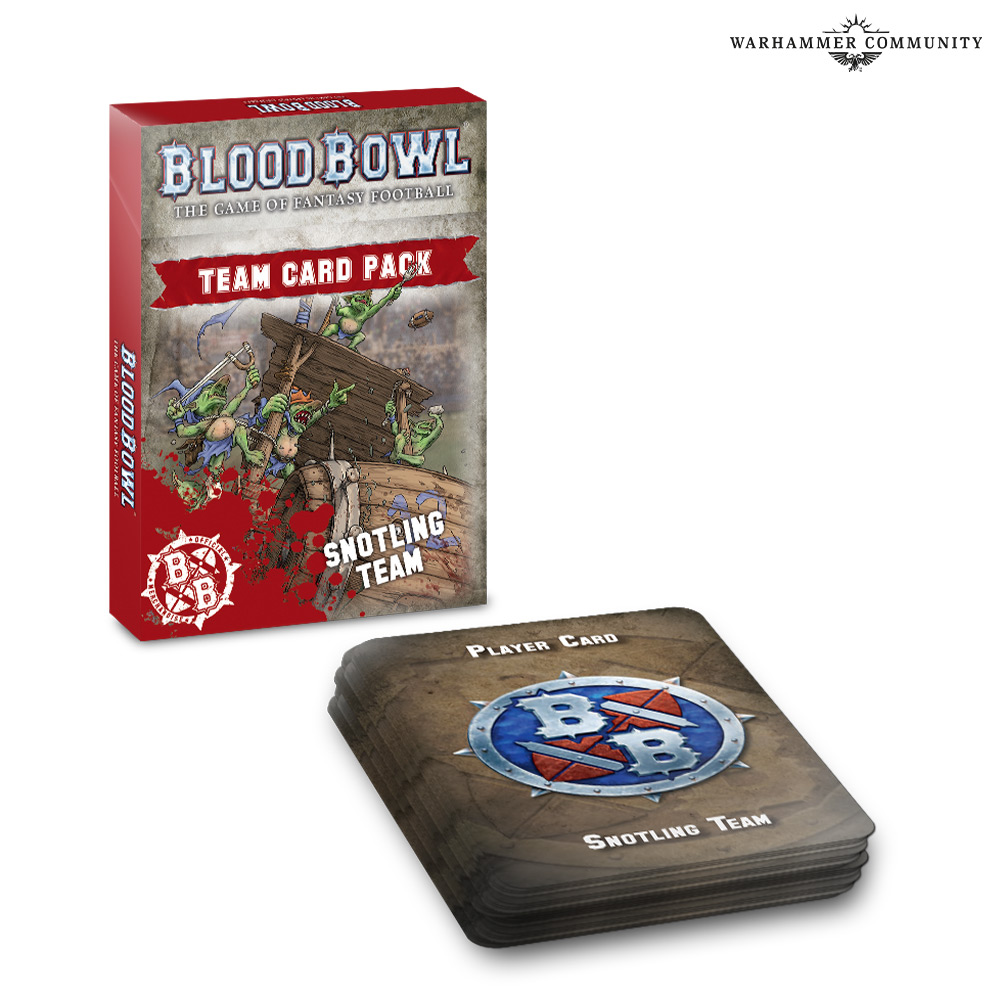 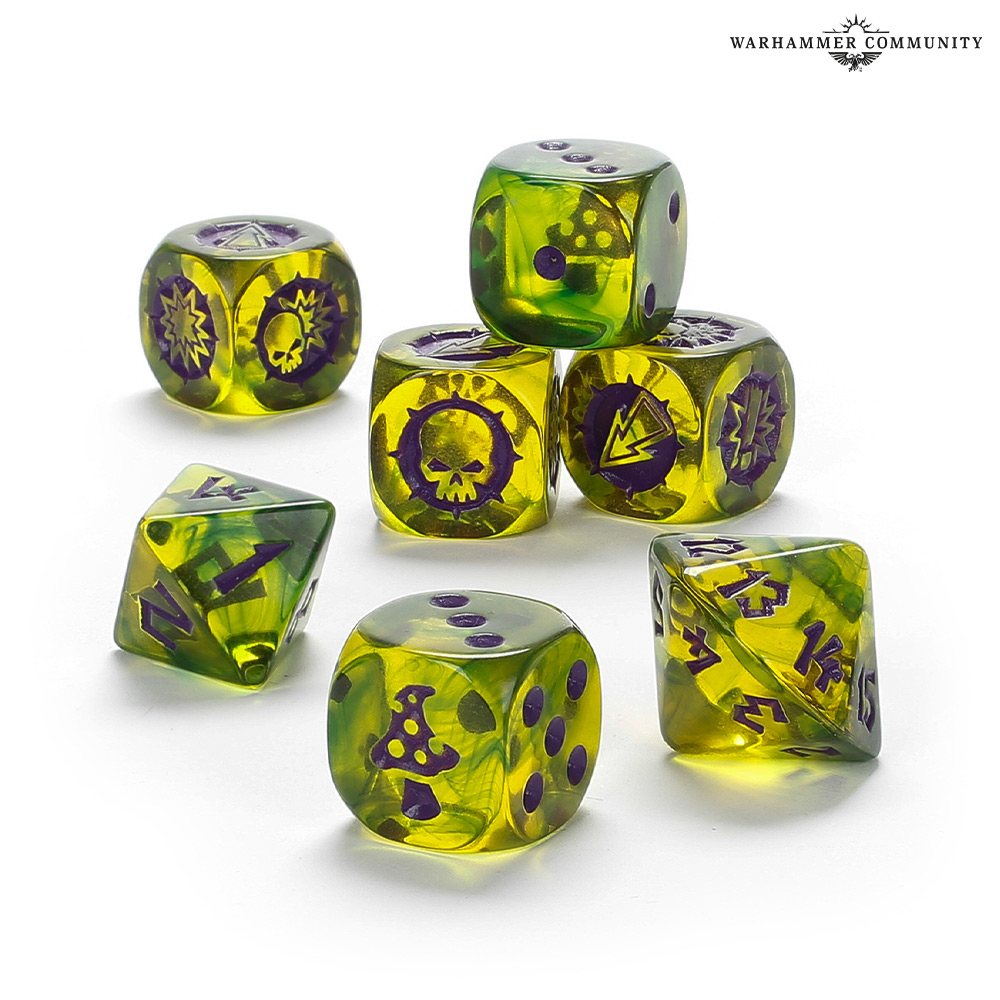 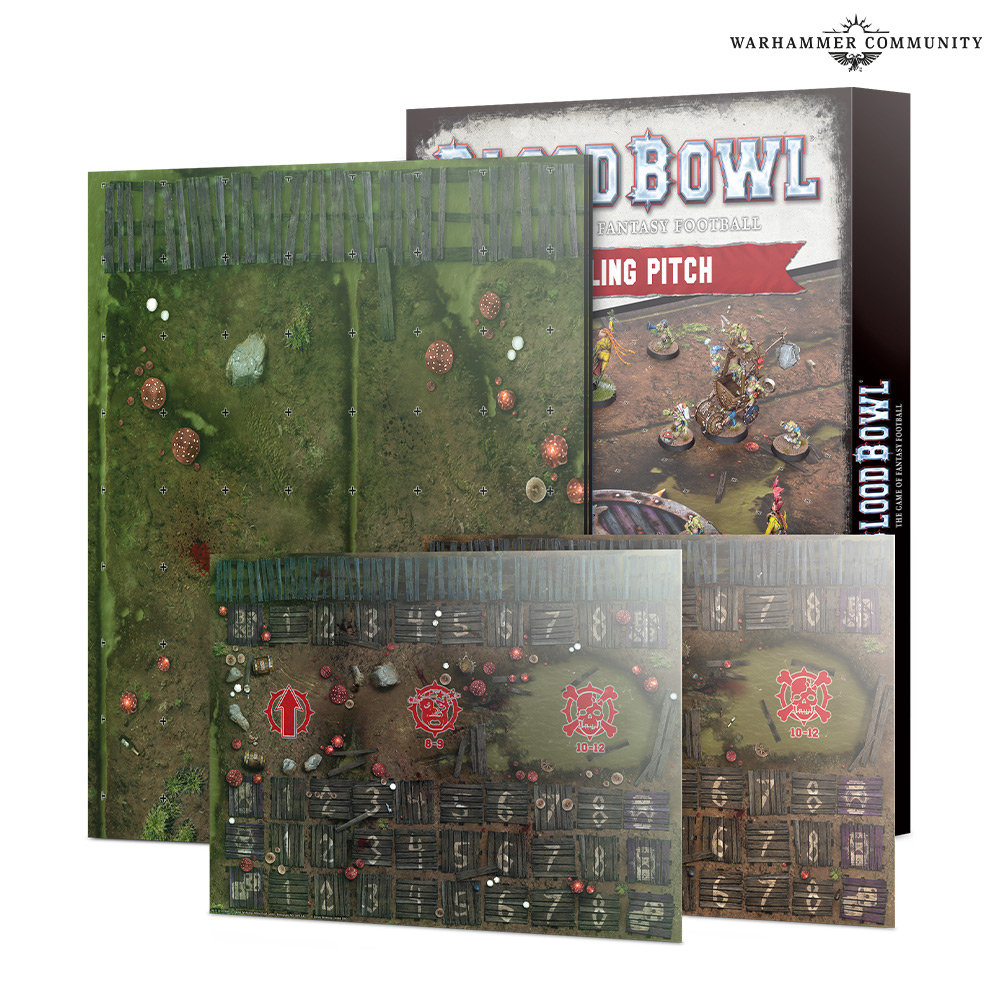 Just imagine if you do win a game with Snotlings – you’ll go down in Blood Bowl history as one of the finest coaches of the ultimate game of fantasy football ever.

Next week sees Black Library return to the mean streets of Varangantua for the first-ever Warhammer Crime anthology. Featuring stories from the likes of Graham McNeill, Nick Kyme, Chris Wraight, and more, No Good Men is the perfect jumping-off point for your Warhammer Crime journey. It is available in paperback and ePub versions. 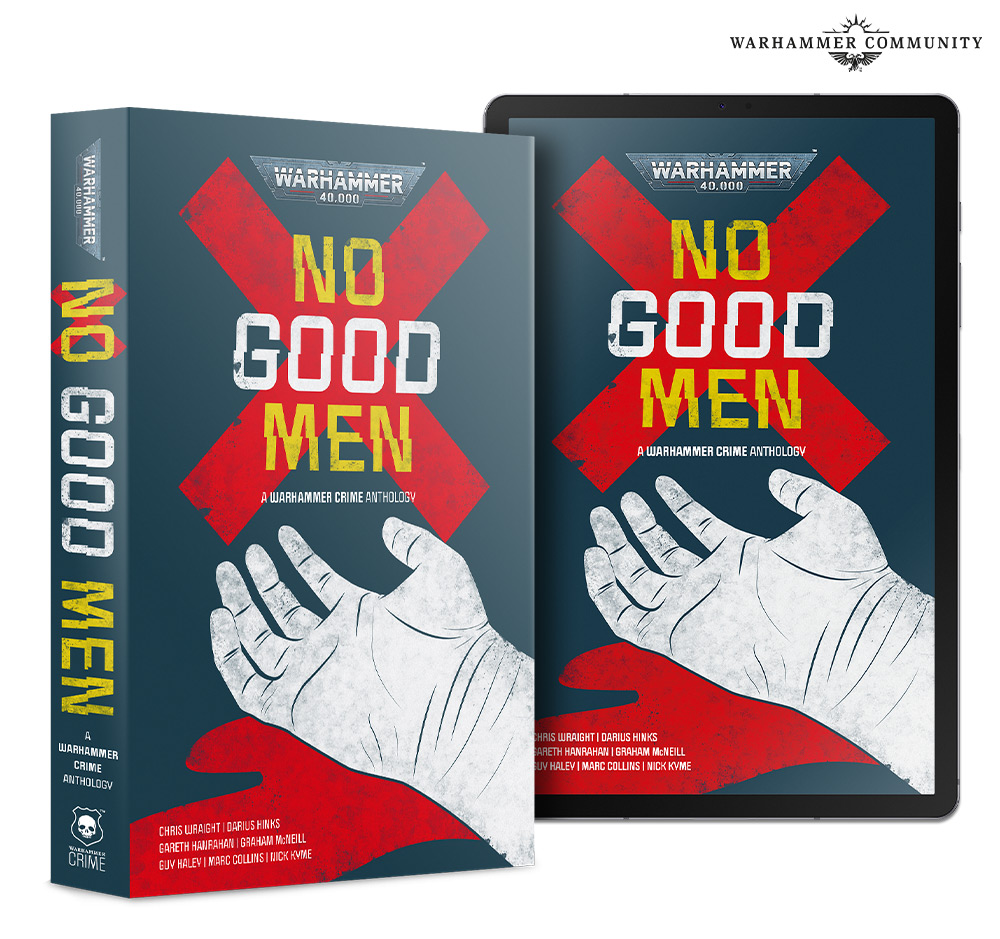 Saturday also sees a trio of novels coming to paperback. Farsight: Empire of Lies by Phil Kelly tells of the eponymous T’au commander launching an obsessive war against the Orks but discovering that his real struggle is between the Greater Good and the hideous truths of the galaxy. Witness the forces of the Adeptus Custodes and Sisters of Silence scouring Terra for a mysterious foe who does not share Roboute Gulliman’s vision for a new order in Chris Wraight’s Watchers of the Throne: Regent’s Shadow. Finally, Oaths & Conquests is an anthology of tales set in the Mortal Realms. Featuring stories by William King, David Guymer, Evan Dicken, and many more, these thirteen stories explore the heroes of Order standing against the darkness of Chaos, the fury of Destruction, and the sinister chill of Death. 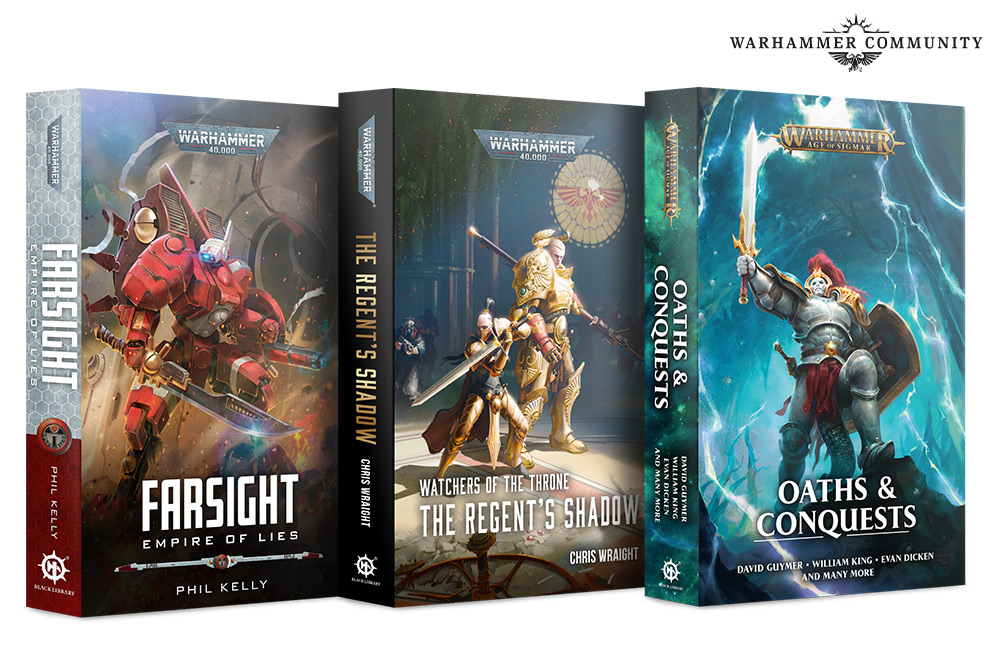 You can pre-order all of these books from Saturday – your bookshelf will definitely thank you.

Did you think that we’d already previewed everything? Pah! We still have LOADS to show you, and we’ll be revealing some of it on Saturday in our latest Warhammer Preview. Join us from 1:45 pm (BST) on Twitch to see all of the amazing reveals live! We’ll also have coverage right here on the Warhammer Community website to ensure that you don’t miss a thing!

Speaking of this very website, throughout the week, we’ll be taking a look inside the House of Blades book and seeing what the Snotlings can do on the astrogranite. We also have a full week of shows on Warhammer TV. 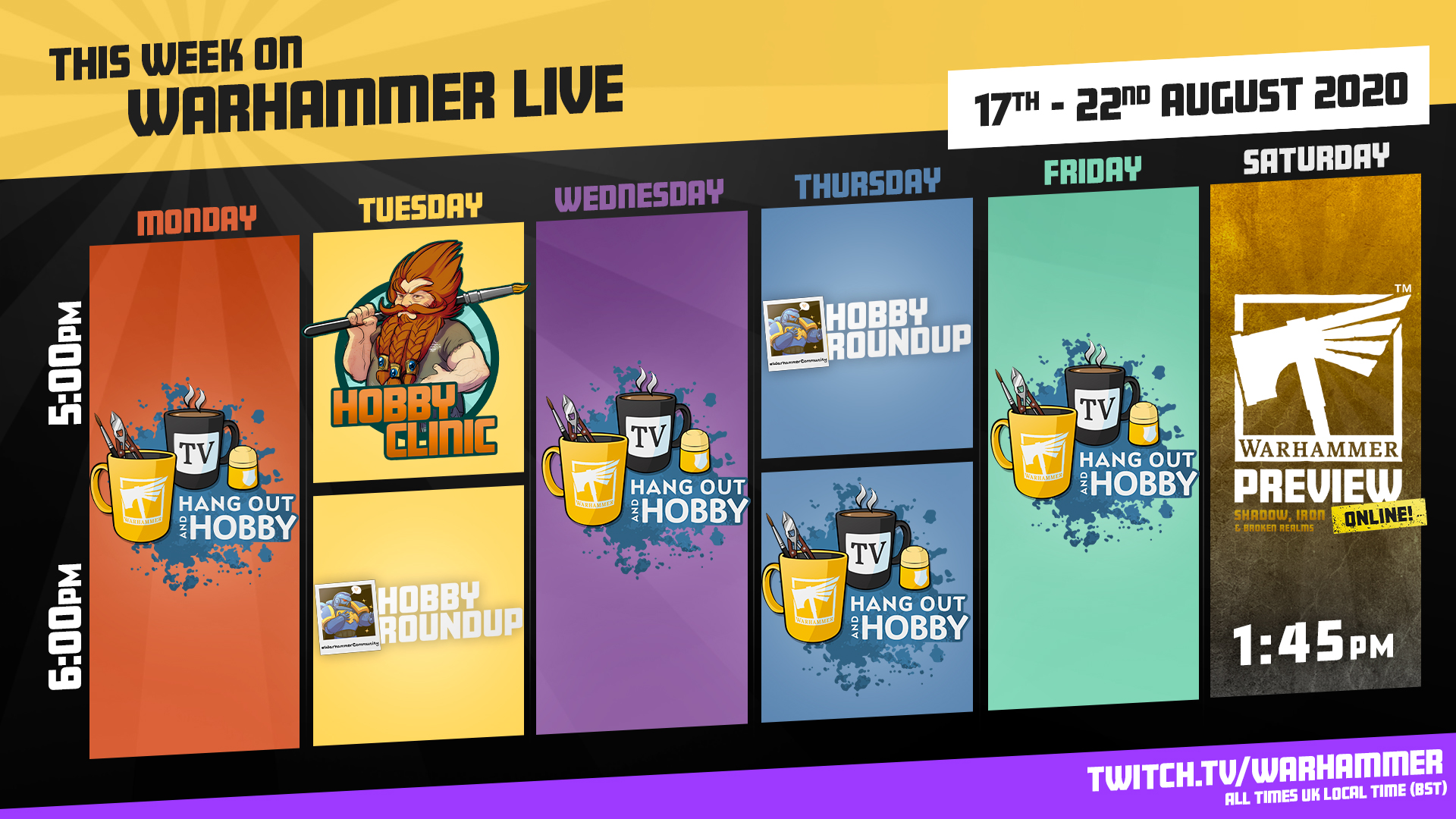 Phew! What a packed week. Make sure that you join us over on Facebook, Twitter, and Instagram to let us know which releases you’re looking forward to most and to have a guess as to what we might be revealing in Saturday’s preview – join in the conversation by using #WarhammerCommunity.

* One each for Cawdor, Goliath, Escher, Van Saar, Delaque, Orlock, Enforcer, Corpse Grinder, Genestealer Cults, Helot Chaos Cult, Venator, and Slave Ogryn gangs.
** Fans of The Lord of the Rings™ films might notice that his mounted version with a spear looks almost exactly the same as he does on screen. How cool is that?
*** And the basis for the aircraft’s name.
**** Just imagine how insanely fun games between Halflings and Snotings are going to be!

There are new goodies available to pre-order for Necromunda, Blood Bowl, Aeronautica Imperialis, and Middle-earth. Explore them now!

It’s paperback week, with four books up for pre-order, including the first-ever Warhammer Crime anthology! Check ’em out.