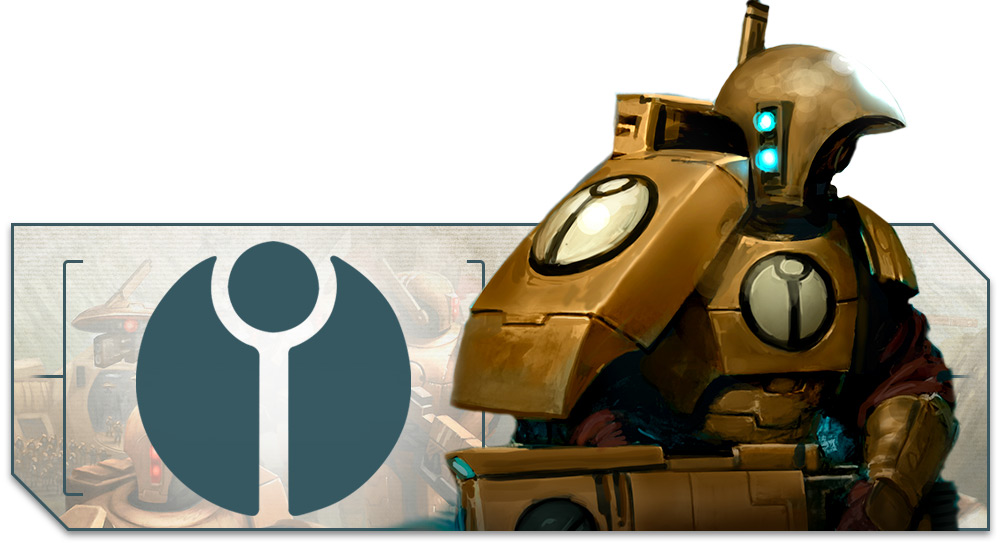 With the new rules for Overwatch, it would be easy to think that the T’au Empire has lost one of its most popular advantages. Well, in today’s Faction Focus, with the help of one of Commander Puretide’s foremost students, Brian Pullen, we can happily inform you that this is far from the case. Let’s crack on and find out why. 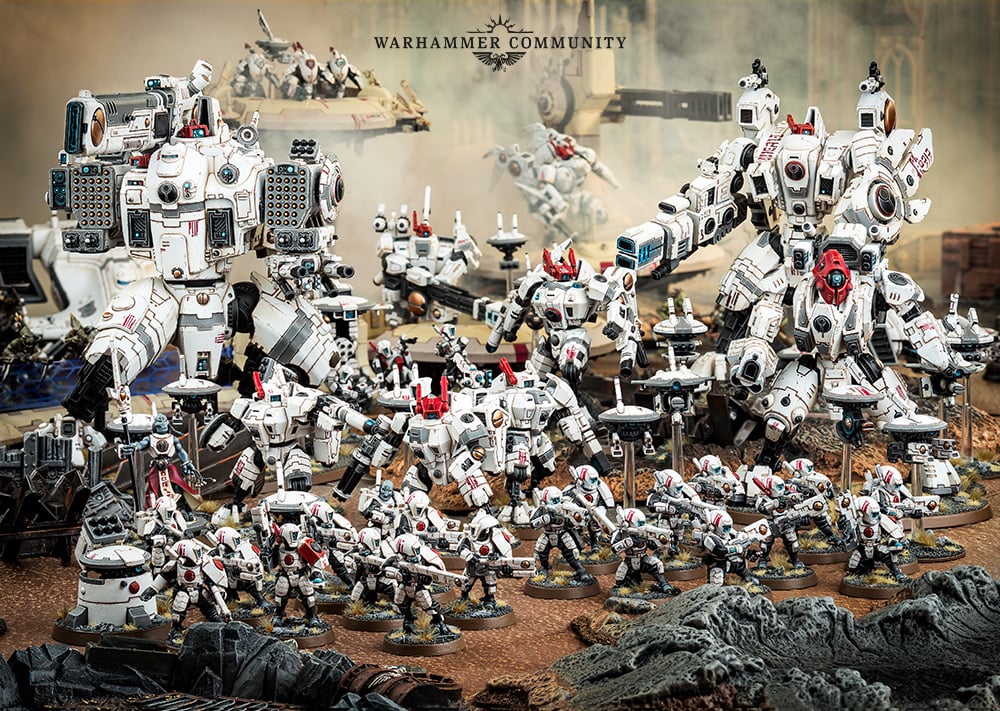 When the Imperium first encountered the T’au Empire some 6,000 years before the Era Indomitus, they were little more than warring tribes of savages. Then the Ethereals came – regal and imperious beings whose mere presence seemed to possess an intrinsic power to unite the T’au people. With their nascent civilization working together as one ‘for the Greater Good’, the T’au Empire developed at an astonishing rate. Divided into five castes – Fire (military), Air (aviation and interstellar travel), Water (diplomacy and administration), Earth (scientific research and construction) and Ethereal (leadership and strategy) – all working seamlessly towards a common goal, the T’au Empire flourished exponentially.

Despite having no psykers or methods for reliably* traversing the warp, they have since launched five great Spheres of Expansion to colonise, annex or (should negotiations fail) conquer new worlds in every direction from their original sept world of T’au. Though many races have aggressively opposed the T’au Empire’s rapid expansions, there are many species – such as the Kroot and Vespid – who have found common cause with the ideals of the Greater Good, and readily fight alongside the Fire caste warriors as auxiliaries. 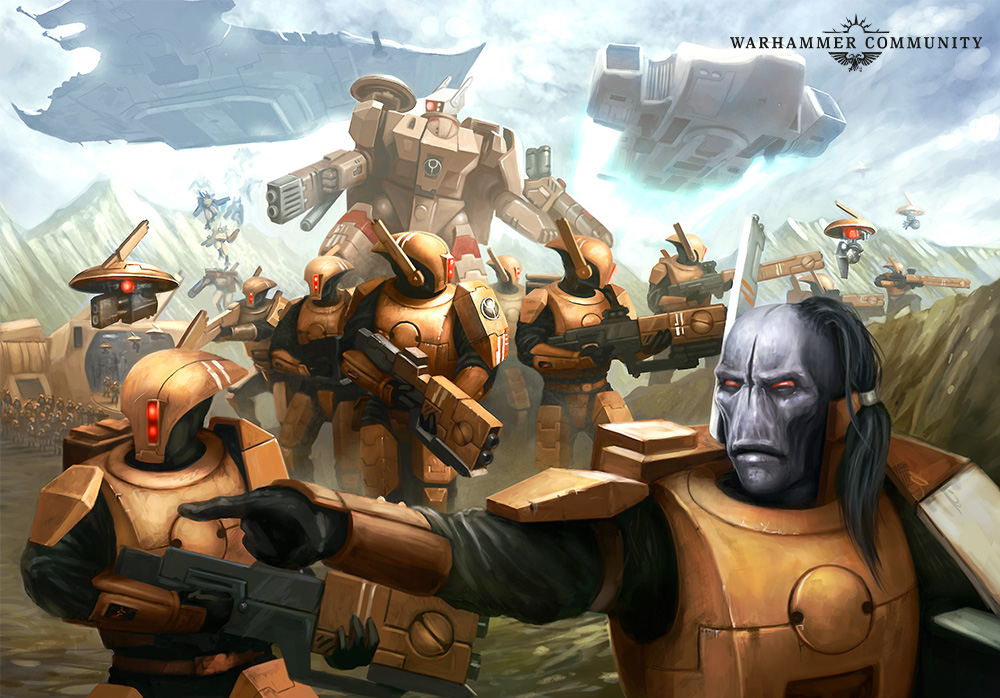 How They Play in the New Edition

For this bit, we’ve awoken Brian Pullen from cryogenic stasis to bring us the teachings of Commander Puretide in person. Since thawing out, Brian’s been busy playtesting and even winning a recent Grand Tournament, stateside. Just don’t tell Commander O’Shaserra, or she may enter next year’s event to prove her supremacy, and that would hardly be fair on all of you.

Brian: The T’au Empire will benefit from a huge number of improvements in the new edition, representing significant changes to how the army plays. The T’au specialise in using small units, such as Drones, that can spread out and control the board. In many mission formats, these small units would punish the T’au Empire force by easily giving away victory points. However, it’s possible to select secondary objectives for the new missions that emphasise board control over the destruction of enemy units, allowing the T’au to really lean into this specialism. 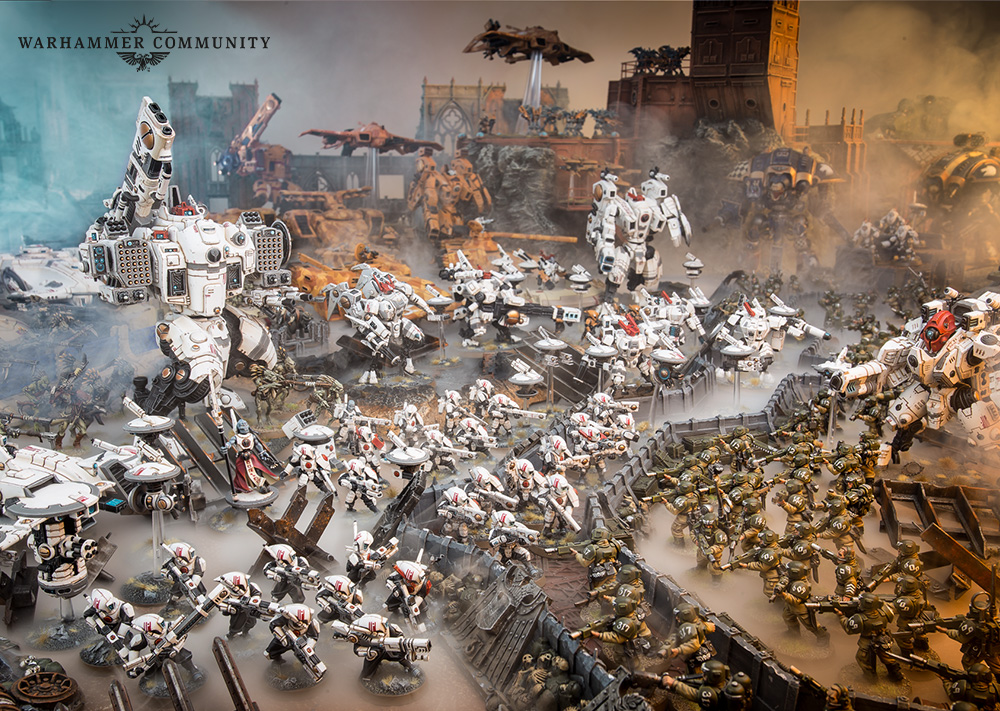 One of the most painful things that T’au face in the current edition are units that inflict multiple penalties to hit rolls, such as -2 or -3 to hit. Armies like Chaos and Aeldari have long been tough match-ups for the T’au when they utilised these tactics. In the new edition, there is a cap, so no units can suffer a modifier of more than -1 to hit, so you can still make your firepower count. 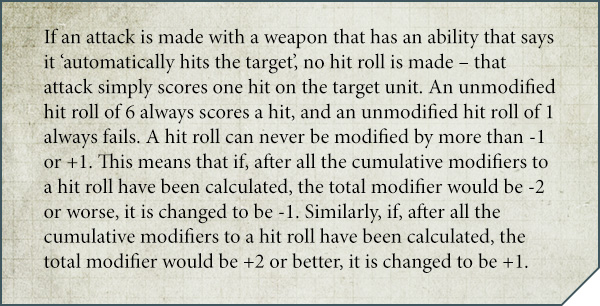 The largest challenge for the T’au Empire in the new edition is the change to the Fly keyword. It no longer offers units the ability to Fall Back and shoot, which means you need to put extra effort into screening enemy charges and preventing your critical shooting units from being engaged in combat. Thankfully, screening is about to become much more effective. You can also look at new kinds of screening units, like Kroot, since you can now escape even when you’re surrounded. 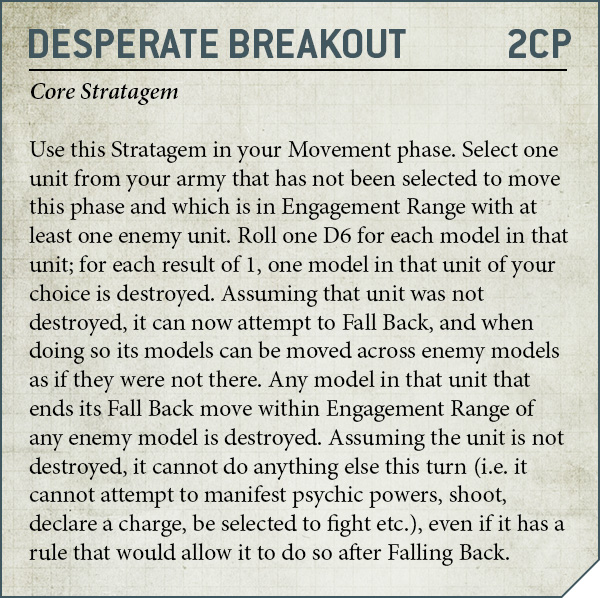 The other way to prevent units from charging you is with the threat of Overwatch. The T’au are still the undisputed masters here. Unlike other armies that need to use a Stratagem to Overwatch, the entire T’au army can do so for free, and they can use their updated For the Greater Good ability** to offer support fire just like they currently do! Enemies will still need to think twice about charging a T’au Empire gun line. 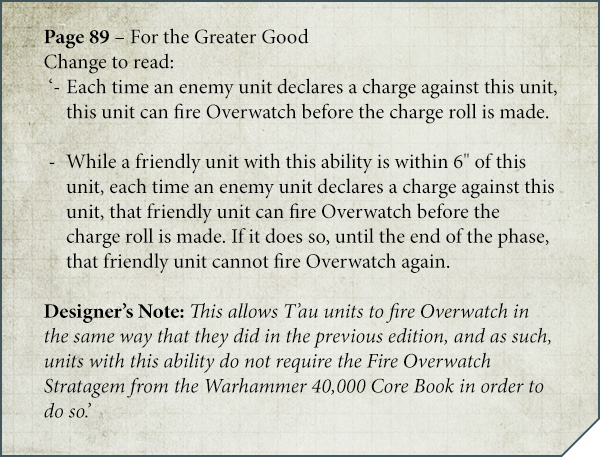 The T’au play best as a highly mobile army that uses many small units to take control of the battlefield. These can be small Drone squads or even the fleet-footed Kroot. Behind these multi-layered screens, you’ll want trusted Battlesuits like Riptides, Broadsides and Ghostkeels. Vehicles like Hammerheads and Sky Rays are also even better with their freedom to move and fire at full effectiveness. The T’au Empire is now faster than ever, which will be a big advantage in the new edition.

Thanks, Brian! Here are a selection of T’au Empire units that we reckon are set to be (or remain) strong choices in the new edition, along with a few hints and tips for using them. 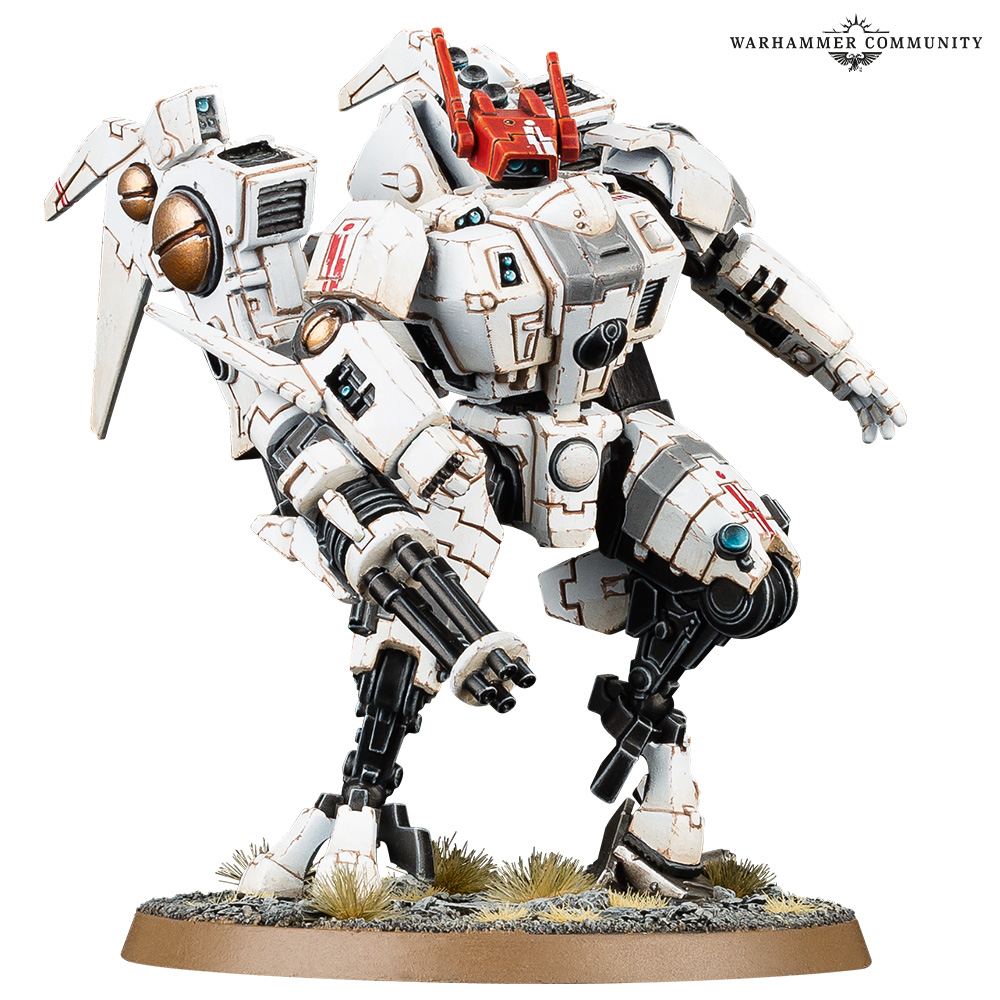 These guys are pure awesomeness, and every T’au Empire Detachment is going to want one! Commanders are very flexible and can basically be built to order with their many wargear and weapon options. For further flexibility, they also have the Master of War ability, letting you choose between Kauyon and Mont’ka styles of warfare depending on their foe. In fact, you may want to consider spending some Command points to field an additional Detachment to include a second Commander (as the T’au can normally only include one per Detachment). 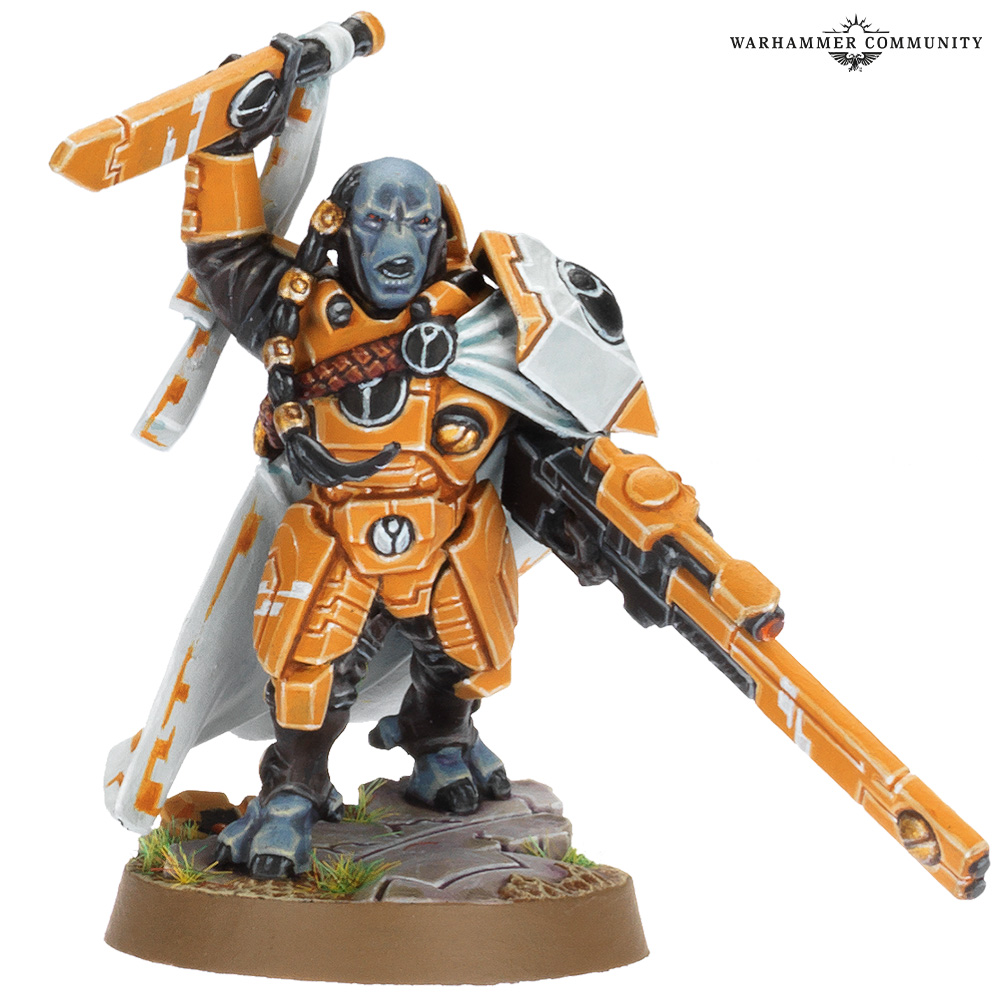 If you’re looking to make the most of the devastating firepower of your Fire Warriors, you simply can’t leave your sept world without a Cadre Fireblade to support them. Not only is he a dead-eye marksman, but he grants an extra shot to nearby Fire Warrior units. Of course, this also applies to their Overwatch fire too, meaning that to charge any of them is to face a murderous volley from every unit in the vicinity! 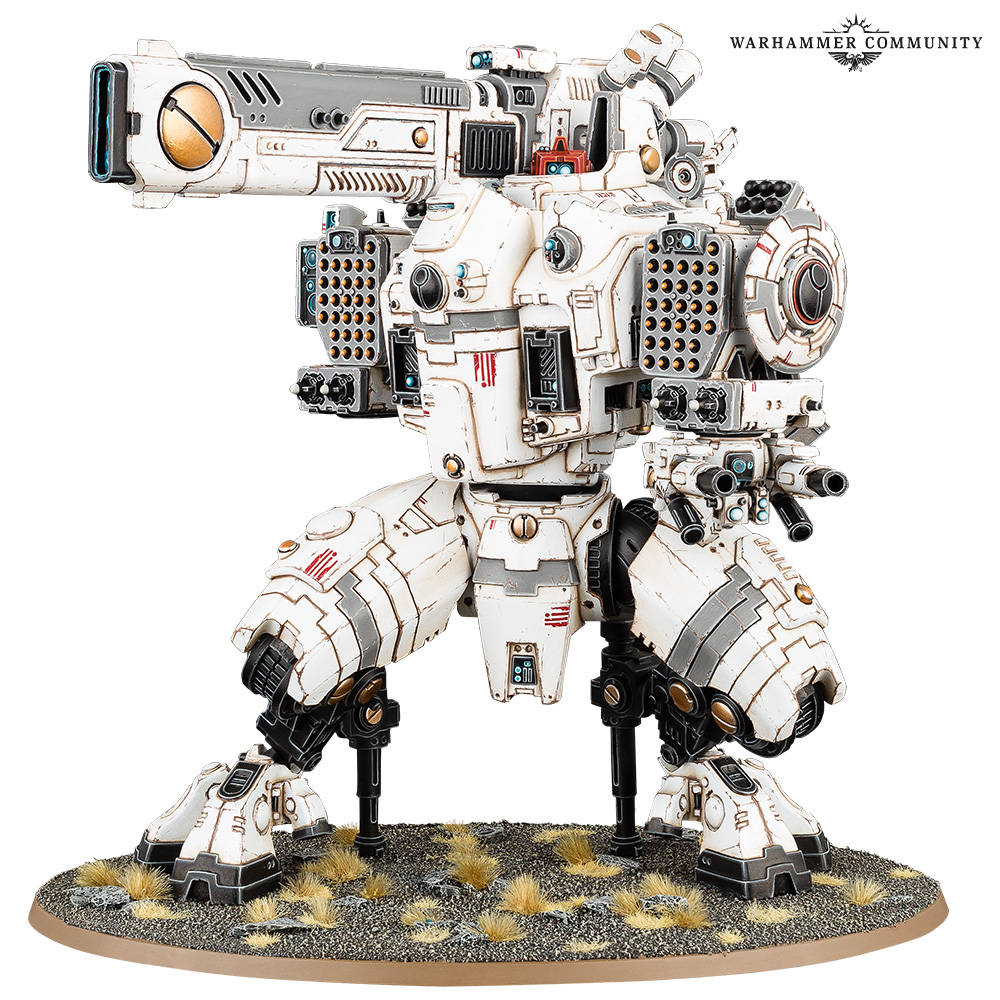 The undisputed master of area-denial in the T’au Empire army. Position a Stormsurge to lock down a fire corridor between obscuring terrain, set its Stabilising Anchors, and it will reliably obliterate anything in front of it. Its presence alone is often enough to force your opponent’s hand to avoid suffering the explosive consequences of leaving a Stormsurge free to do its work, meaning you can use it as (massive) bait to set up deadly counter-attacks with your other units.

How are you planning to serve the Greater Good in the new edition? Let us know on the Warhammer 40,000 Facebook page, Instagram and on Twitter using #New40K.

* Which isn’t to say the Imperium’s methods are especially reliable, but they can actually get from A to B sometimes. The T’au Empire are only just starting to access the wider galaxy.
** This update will be available to T’au Empire players on launch day via an FAQ download.

Discover how Mortarion’s Death Guard are looking in the new edition of Warhammer 40,000…

Ready your lasgun and fix bayonets, as it’s time for our Astra Militarum Faction Focus!