From Aelves to Zoats – Previews from LVO 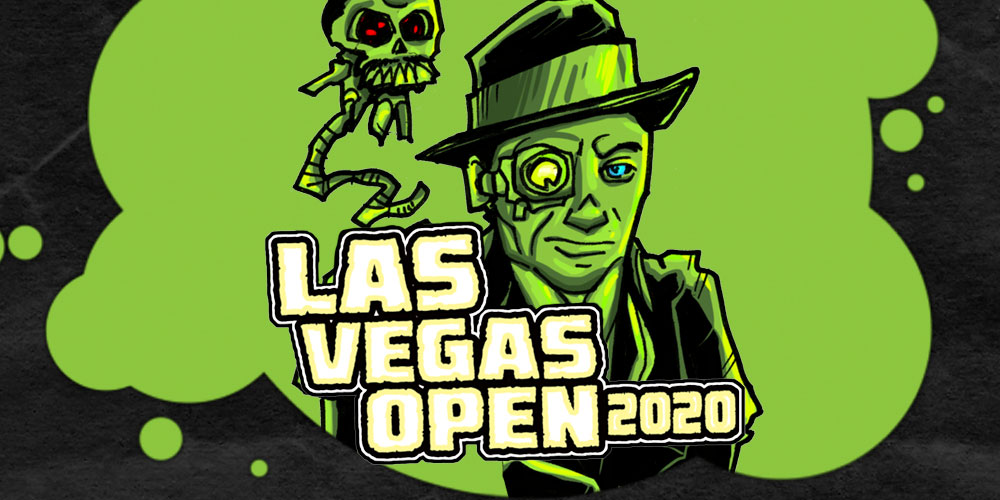 Fresh from the Warhammer Preview at the Las Vegas Open, the lid’s just been lifted on all kinds of awesome surprises coming in 2020. Let’s take a look. First up – the latest news from the 41st Millennium…

In the grim darkness of the far future, the Psychic Awakening rages on. Heroes have returned. Strange powers have been unleashed. Dark plots are now set in motion. But not everyone in the galaxy is stoked about this violent influx of psychic phenomena. The warriors of Mars have decided to fight back… with SCIENCE!

That’s right – the Adeptus Mechanicus are set for the largest deployment of reinforcements since they launched. There are binharic bucketloads of new models on the way to support the Skitarii and their Tech-Priest overlords. It’s time to bring logic back to the galaxy!

We already know how great Skitarii are, but you know what would make them even better? If they rode cyber-beasts into battle! And if some of those mechanical quadrupeds also breathe fire?! Say hello to the Serberys Sulphurhounds and their skirmishing brethren, the Serberys Raiders. Need something slain fast? These units are the way to go. 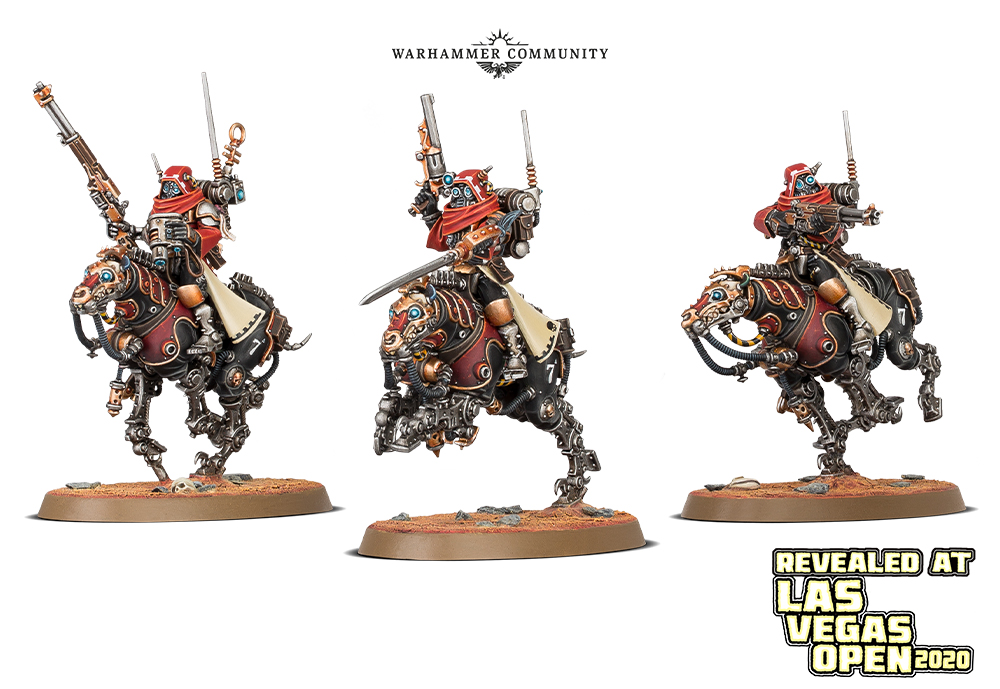 Another new unit you can look forward to is the Pteraxii – the winged cousins of the Sicarians. These cyber-bird-men-things don’t just look stunning – they’re ideal support units in the Adeptus Mechanicus roster, capable of dropping in and picking off key targets while the rest of your troops advance.

The Pteraxii and Serberys units both come in dual kits, giving you loads of tactical options when building your models and plenty of nifty spares for customising the rest of your collection. 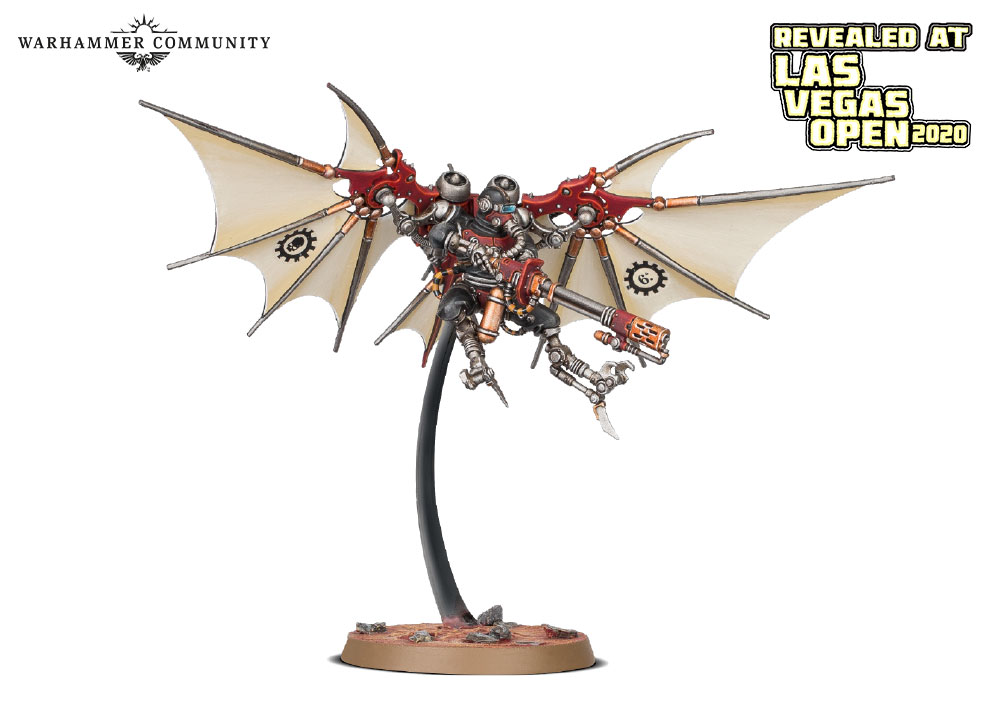 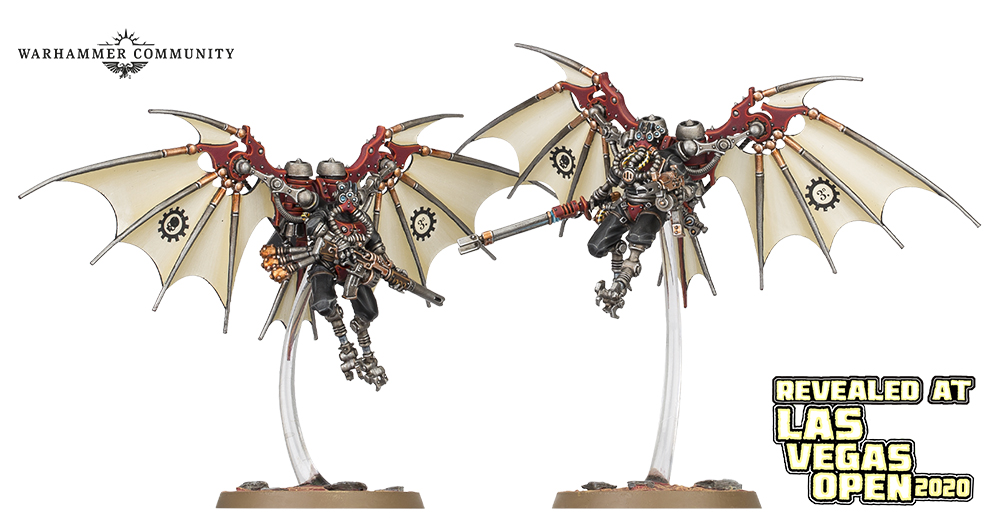 Rules for these units (and the upcoming Archaeopter!) will be available in Engine War, the latest thrilling instalment in the Psychic Awakening series. This supplement will see the war for the Imperium’s soul kick into high gear, as Imperial Knights, Chaos Knights, the Adeptus Mechanicus and Daemons of Chaos battle amidst revelations of hidden sub-cults, twisted schemes and even more surprises… 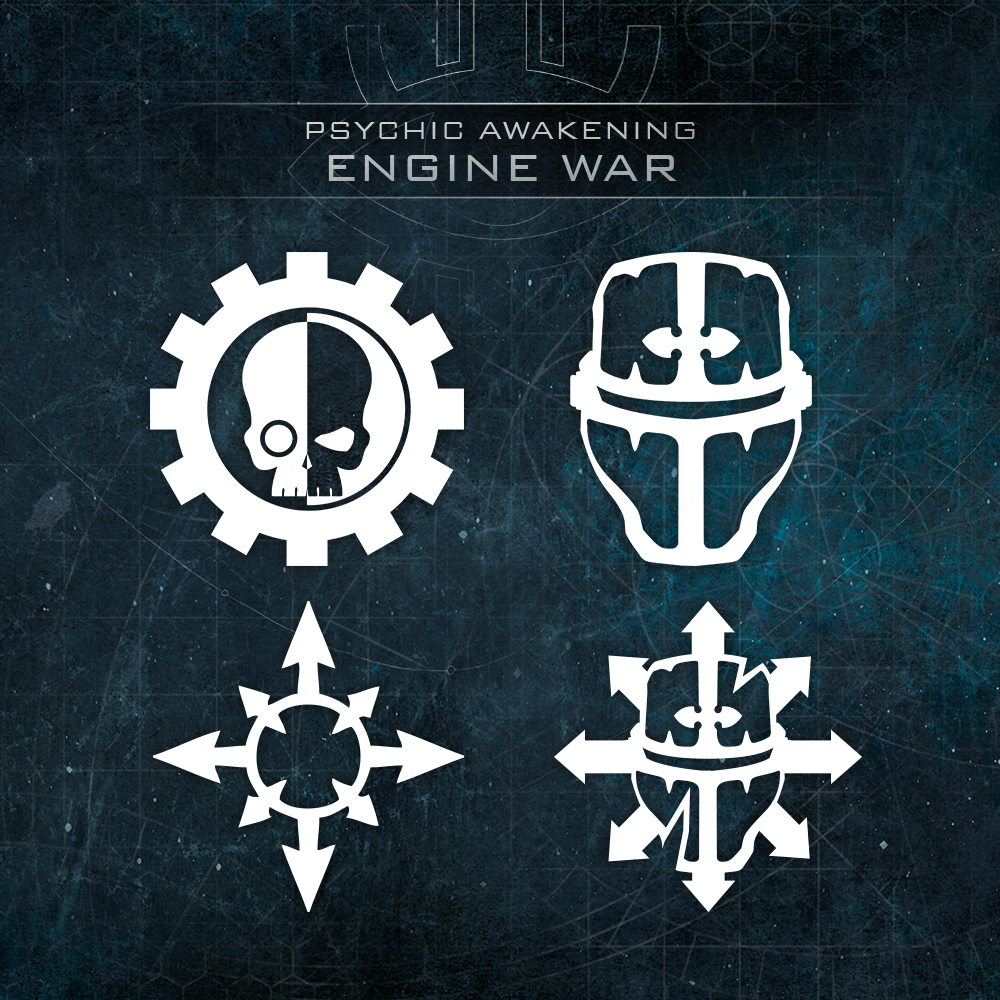 But before we get to Engine War, the 41st Millennium will see the return of one of the galaxy’s most notorious greenskins…

Yes, Makari is back! Rumours that he’d been sat on were greatly exaggerated. But who could his big green buddy be? We’ll just have to wait and see…

Next up? Loads of news for the Mortal Realms.

The last few weeks have seen the Warhammer Age of Sigmar community work itself into a frenzy. Just who – or what – are pointy aelves? And what does Teclis have planned for them? It’s time to find out.

These are the Lumineth Realm-lords – the ultimate expression of what it means to be “aelf”. Take even the “standard” infantry of the army – Vanari Auralan Wardens. These hearken back to the High Elf Spearmen that made up many a classic Warhammer army, and they’re packed with rich detail never previously thought possible. They are also more than mere soldiers – runes, jewels and little talismans help place these warriors as part of a fully realised aelven culture. 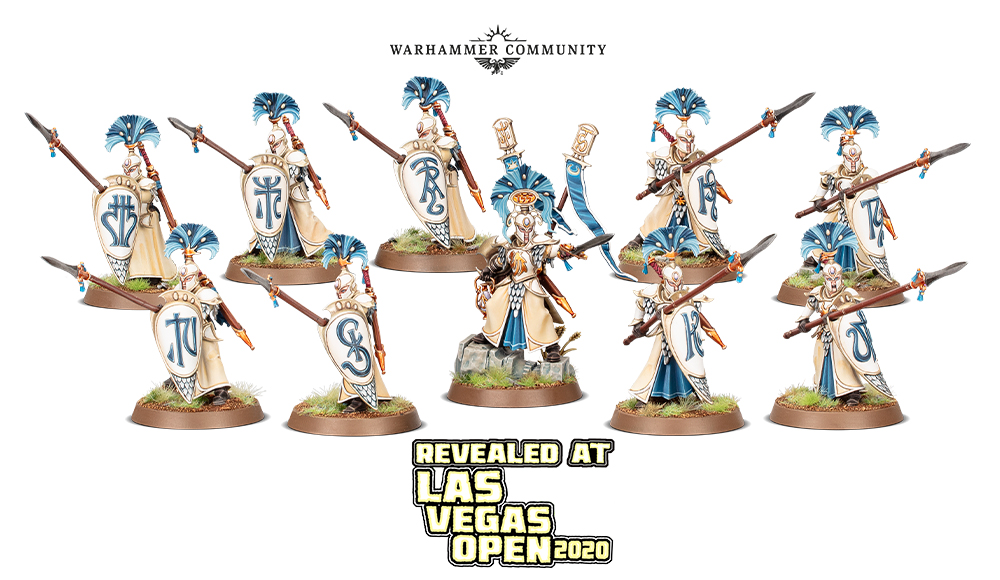 Aelves have an aeons-long tradition of formidable cavalry. After years of seeing aelves ride everything from drakes to eels, the Lumineth Realm-lords have gone full circle back to horses. Yes, honest-to-goodness horses! The Vanari Dawnriders are filled with grace and movement that make them instantly eye-catching on the battlefield. 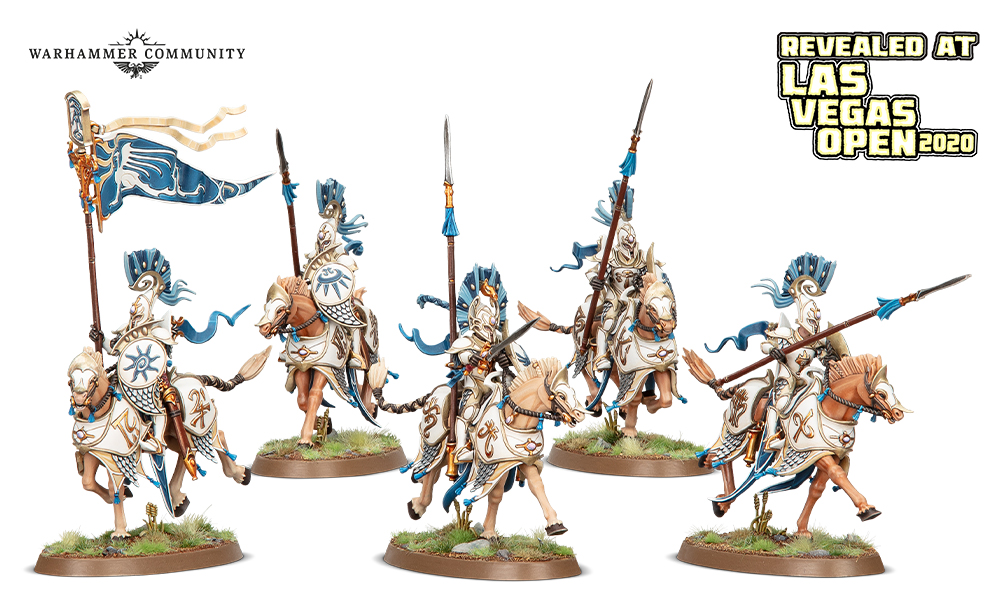 Teclis isn’t the only name you might recognise amongst the new range. The Light of Eltharion sees one of the most legendary heroes of this ancient race return with a truly stunning new miniature. Look closer – that armour is hollow. 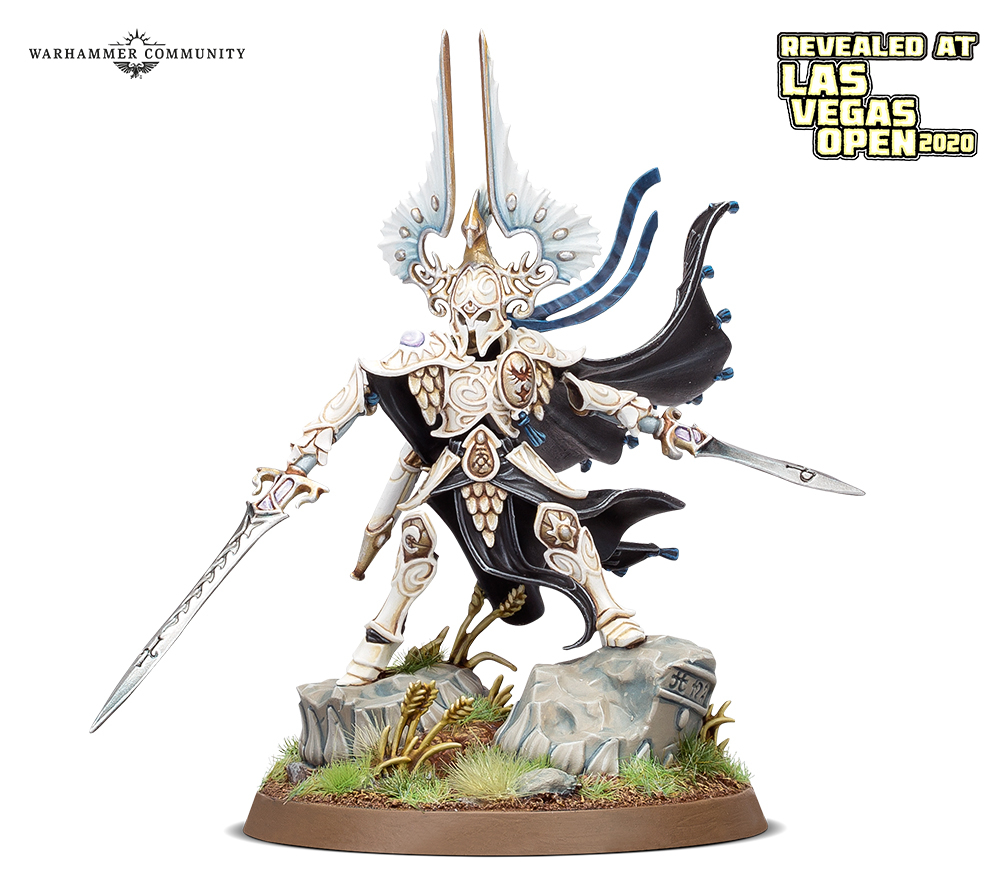 And, of course, we have the return of perhaps Warhammer’s most famous aelven character – Teclis himself. For years, this mage has graced tabletops, books, video games and, of course, your imagination in all manner of guises. Now, in 2020, Teclis returns with a model truly worthy of a god. 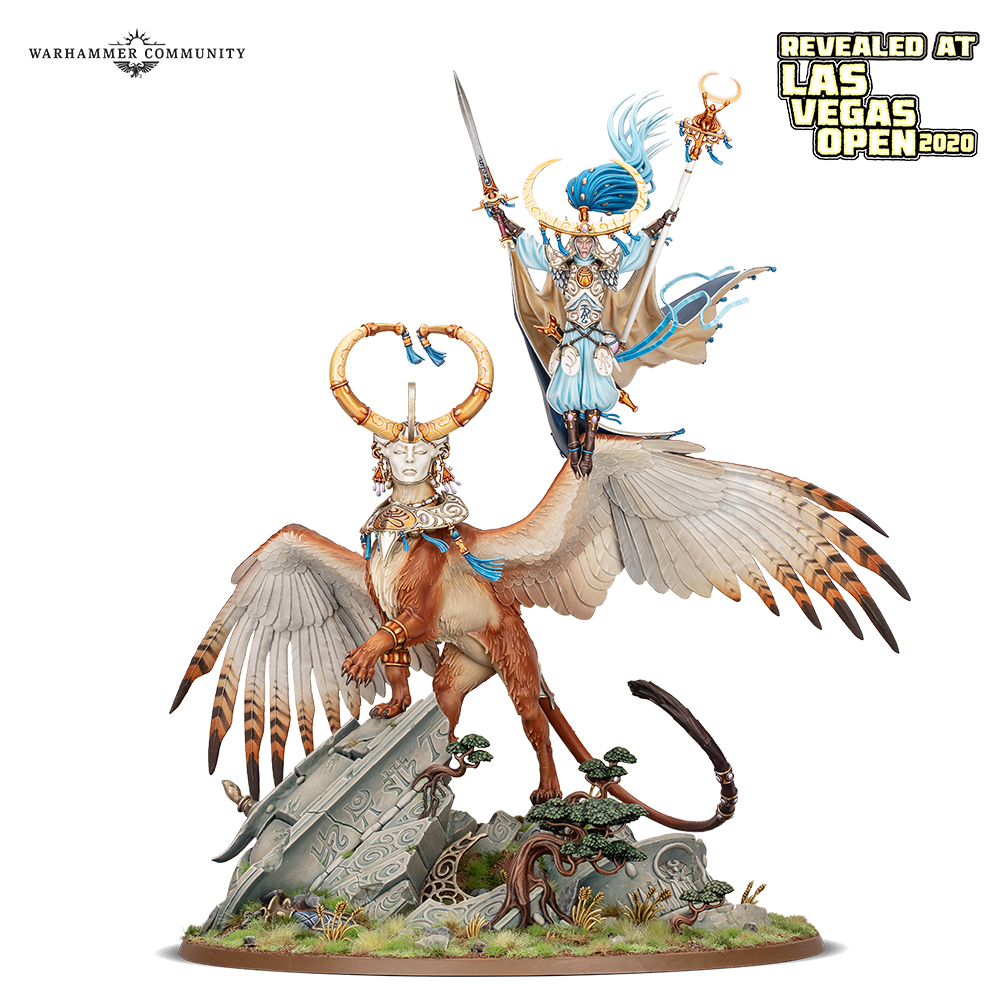 What in the eight realms is that thing he’s riding on? Well, that’s Celennar, Spirit of Hysh! We can’t wait to tell you all about them.

And that’s not even the whole of it – we’ll have EVEN MORE Lumineth Realm-lords to show you closer to their release.

In the meantime, aelves aren’t the only ones getting a new battletome. 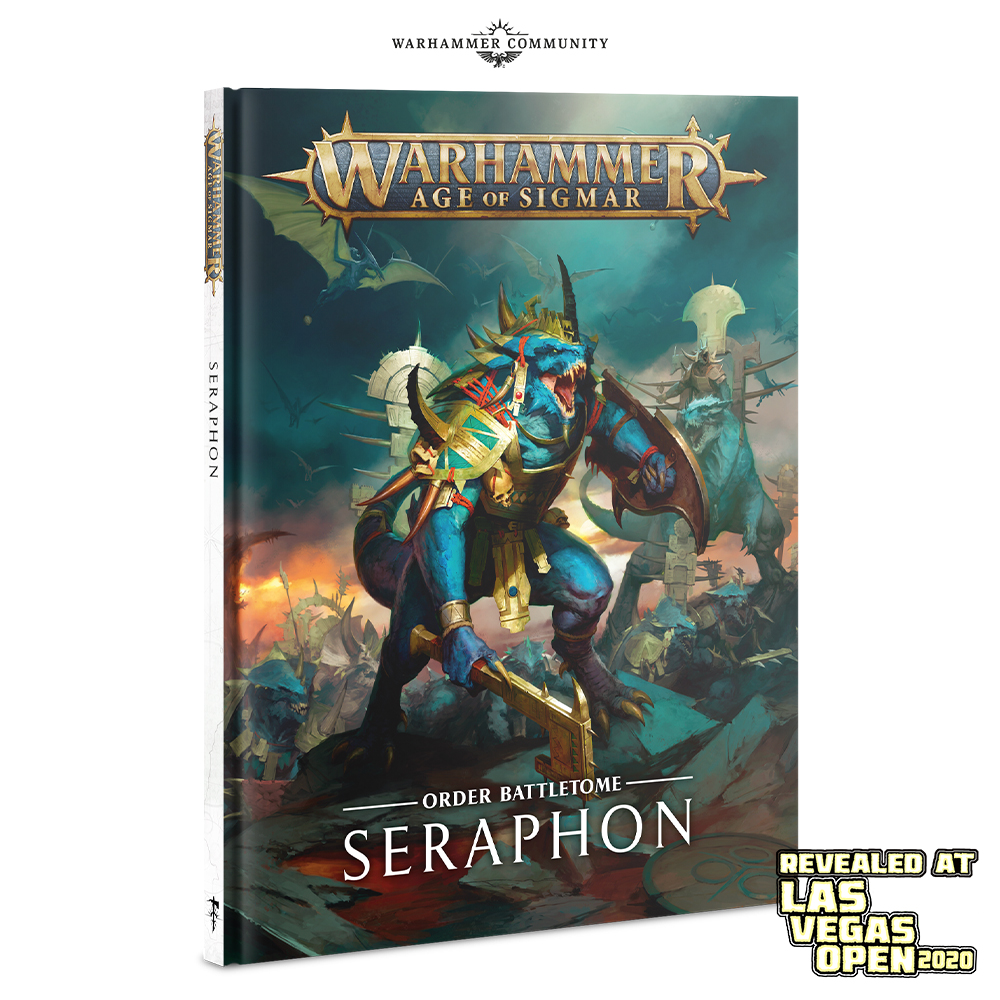 The Seraphon are getting a new battletome! And this awesome thing… 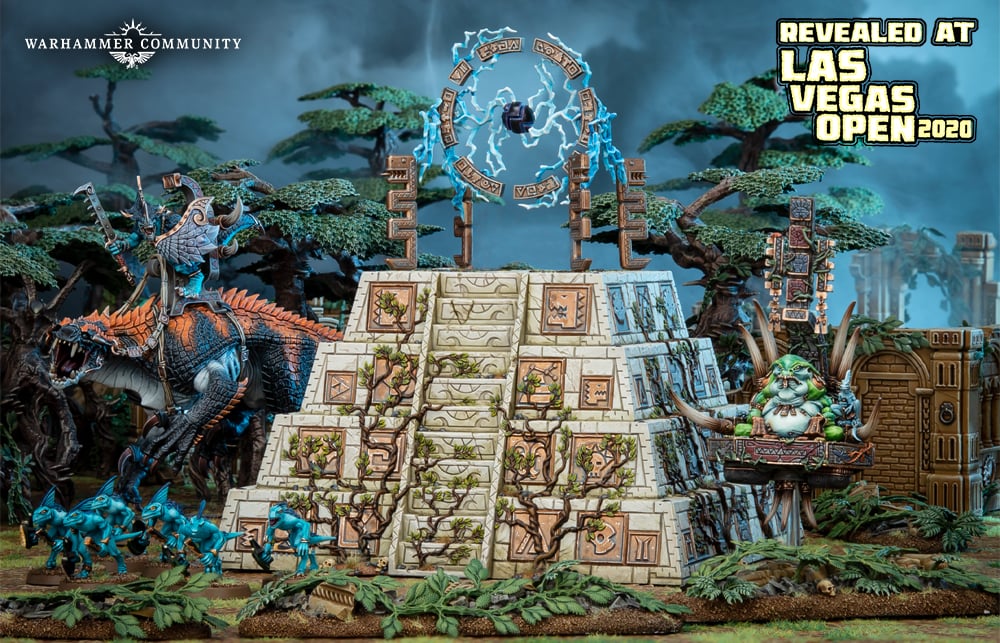 From the earliest days of Warhammer Age of Sigmar, the Seraphon have been a massively popular faction – they were even one of the first to get a battletome! Now you’ll be able to field them with all the nifty allegiance abilities, sub-faction rules and more that you’ve come to expect from a modern Warhammer Age of Sigmar army. 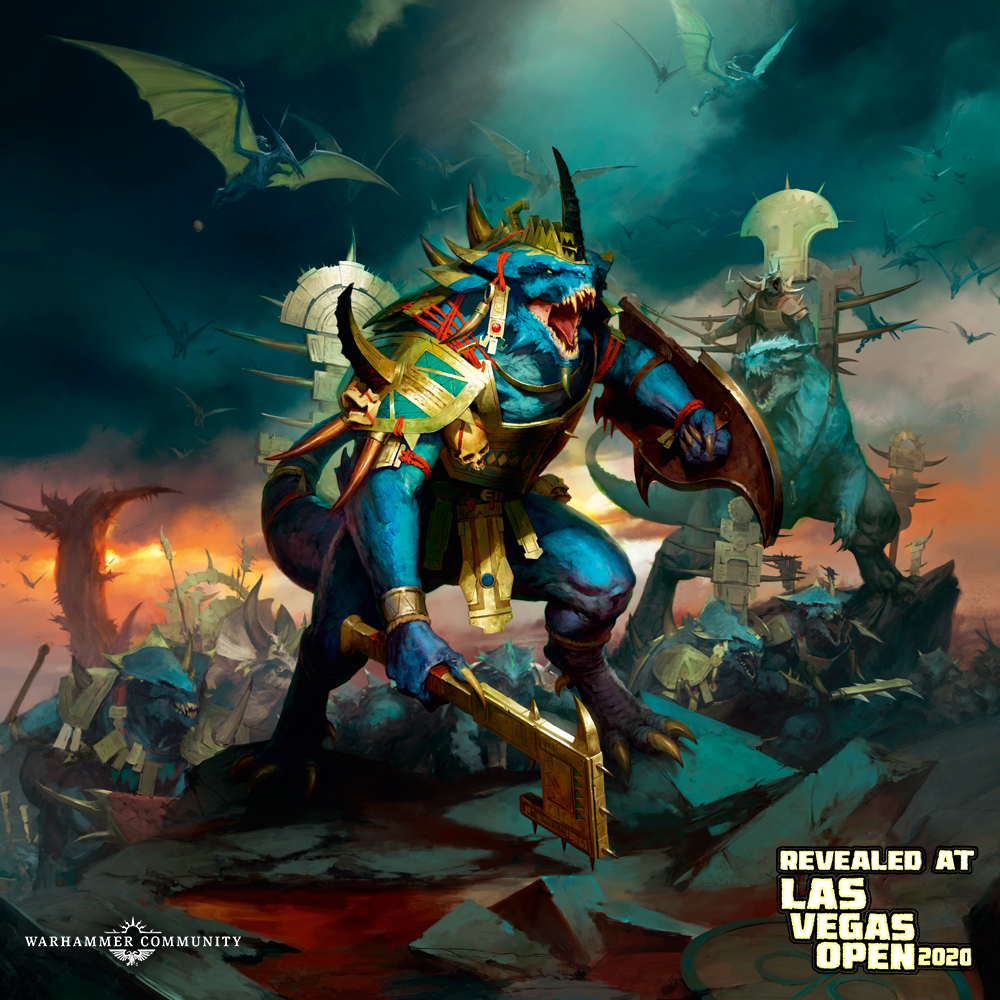 The new battletome fully explores the origins and nature of the Seraphon in the Mortal Realms. You’ll have the chance to find out how the original refugees from the world-that-was became the celestially charged Starborne, and how the Seraphon are changing into the Coalesced – whatever that means.

You won’t have long to wait until this new Seraphon battletome and scenery hits shelves – keep an eye out for more previews soon.

Meet The Wurmspat – a warband of repellent Rotbringers ready to bring Nurgle’s love to the ultimate competitive miniatures game. 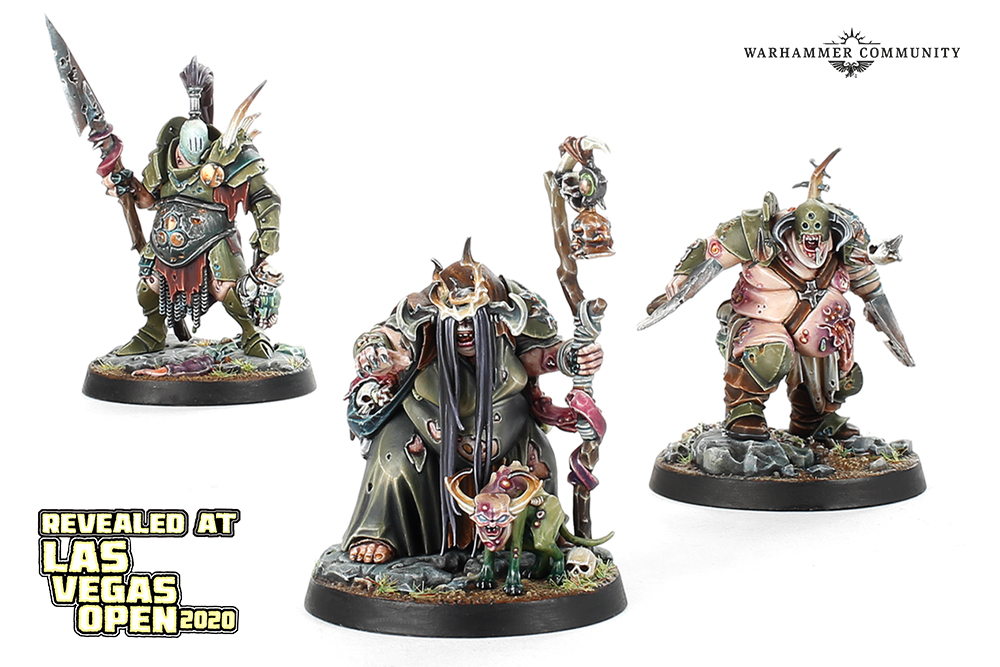 Consisting of two Putrid Blightkings and Sorcerer Fecula Flyblown, this Warhammer Underworlds warband employs the unique play style of the Maggotkin of Nurgle – they’re durable, relentless and superb at wearing enemies down in a battle of attrition. Also, if you thought Nurglings were cute, check out this adorable little retchling!

If you like your Warhammer in Quest form, there are some exciting developments coming your way. Blackstone Fortress has given us the opportunity to populate its labyrinthine corridors with all manner of obscure beasties and beings. This latest addition just might be the most unexpected. 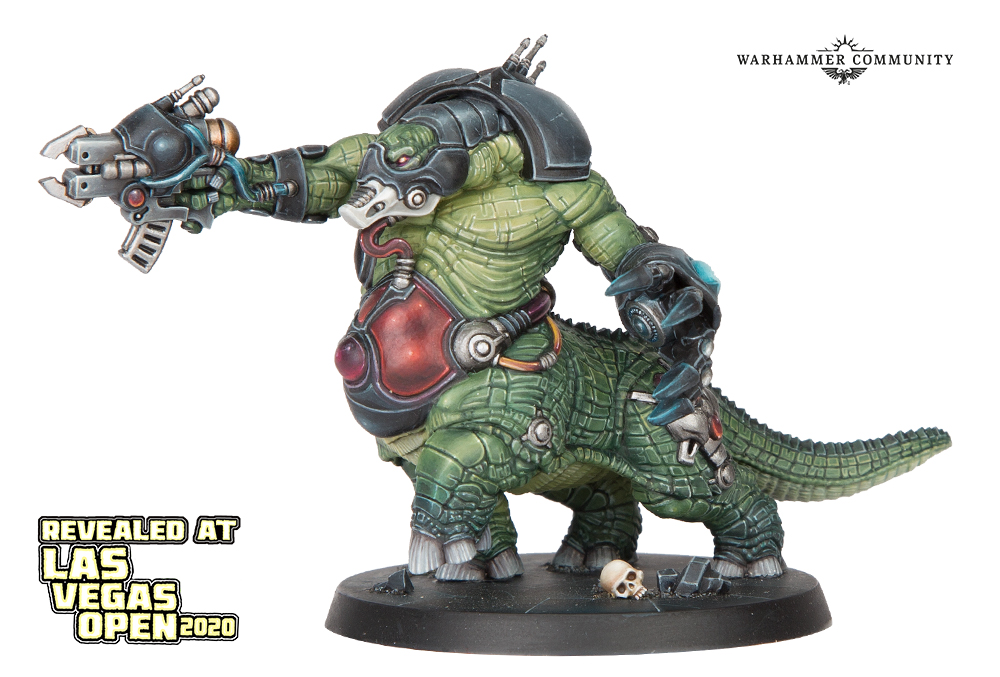 For those of you wondering what the big green thing in the picture above is, allow us to explain. Back in the distant past of Warhammer 40,000 they were a race of strange creatures who served as heralds for the Tyranid Hive Fleets before disappearing, seemingly forever. (We all assumed they’d just been eaten…)

Now, thanks to our miniatures designers and a healthy dose of nostalgia, we have the first new Zoat in decades, coming soon to a Blackstone Fortress near you.

We’ve got some great news if you’re a Warhammer 40,000 player with Forge World models in your collection. 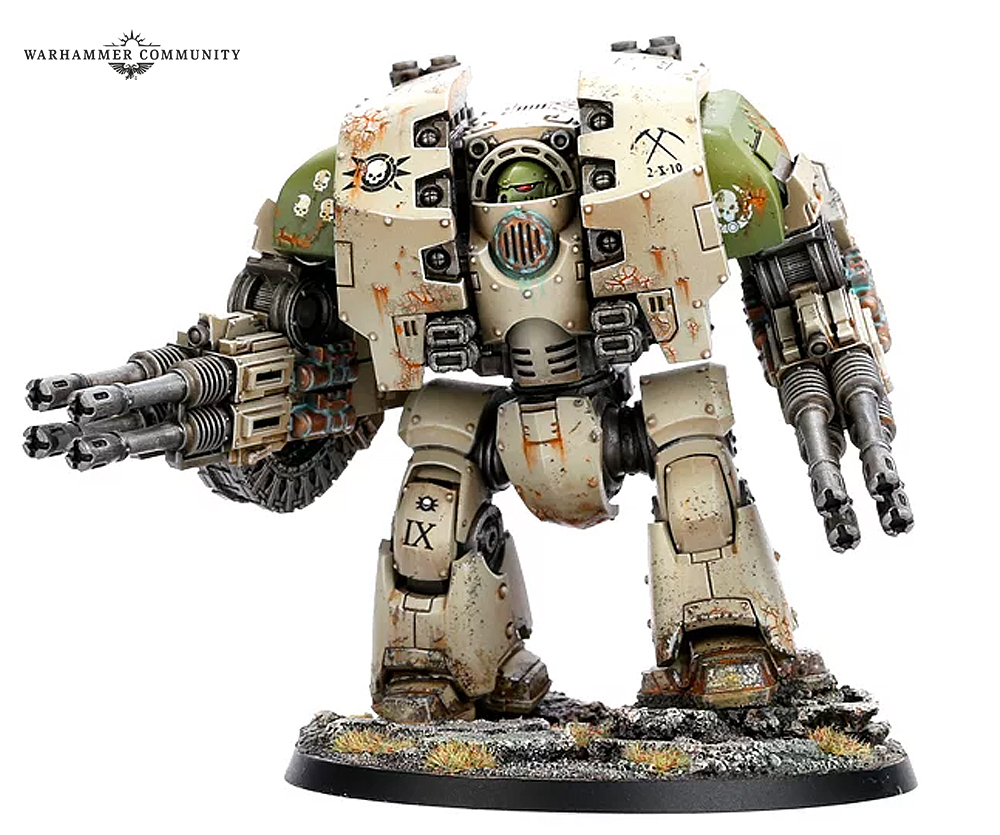 Since the release of the Forge World indexes a couple of years ago, Warhammer 40,000 has changed a lot. While the indexes were a great reference resource, we want to give you something even better – which is why the Warhammer 40,000 studio embarked on a project to bring you a series of all-new books with updated rules for these units and armies. 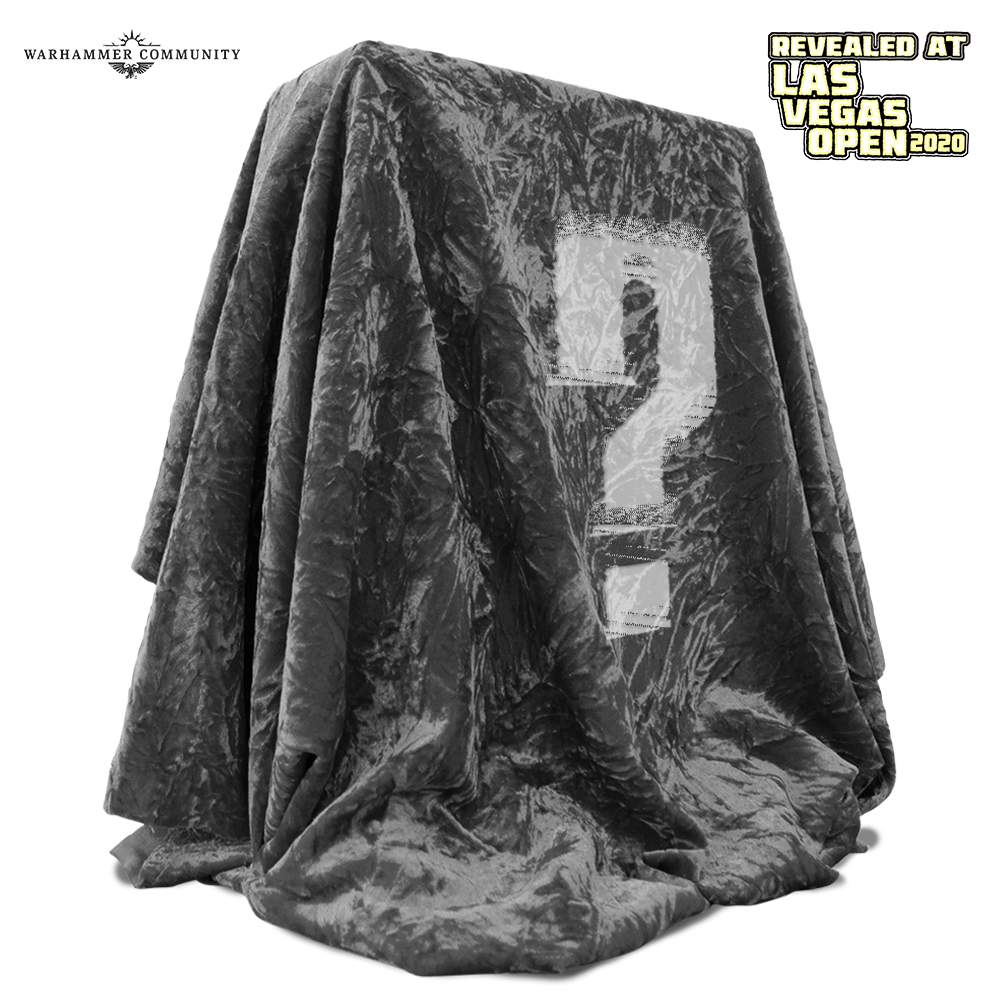 To make room for these new, mysterious books, the Forge World indexes will be disappearing, though the rules will remain in use until the new books arrive. We’re letting you know now so you’ve got a chance to pick them up if you’re missing any. We’ll have more news soon, so keep an eye out.

2020 is definitely shaping up to be an amazing year for the Age of Darkness thanks to the release of The Horus Heresy – Book 9: Crusade. We’ve already seen some of the awesome models that are coming in our Road to Thramas series, but that doesn’t mean the Dark Angels and Night Lords are the only Legions getting some love this year. Just check out Qin Xa from the White Scars. 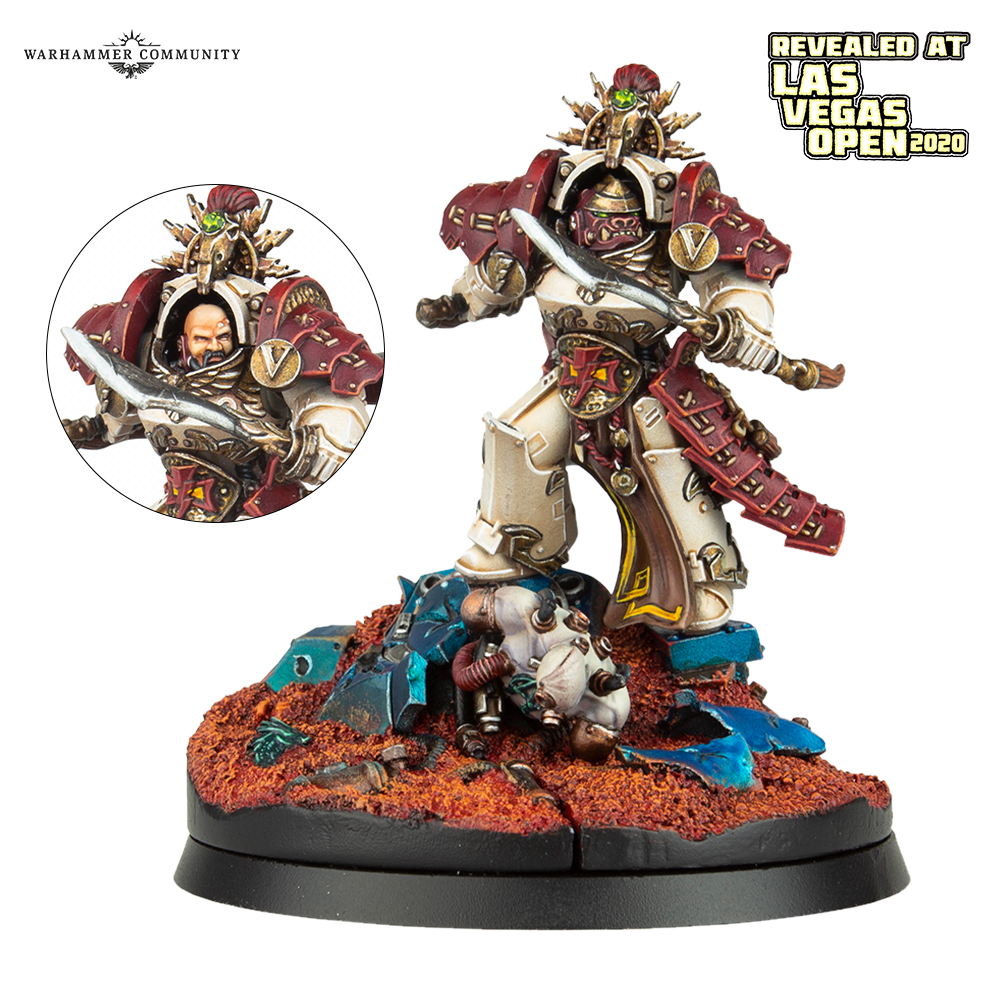 We’ll have more news on the Master of the Keshig closer to his release date but rest assured that, before you know it, he’ll be slicing through Traitors with those twin blades. 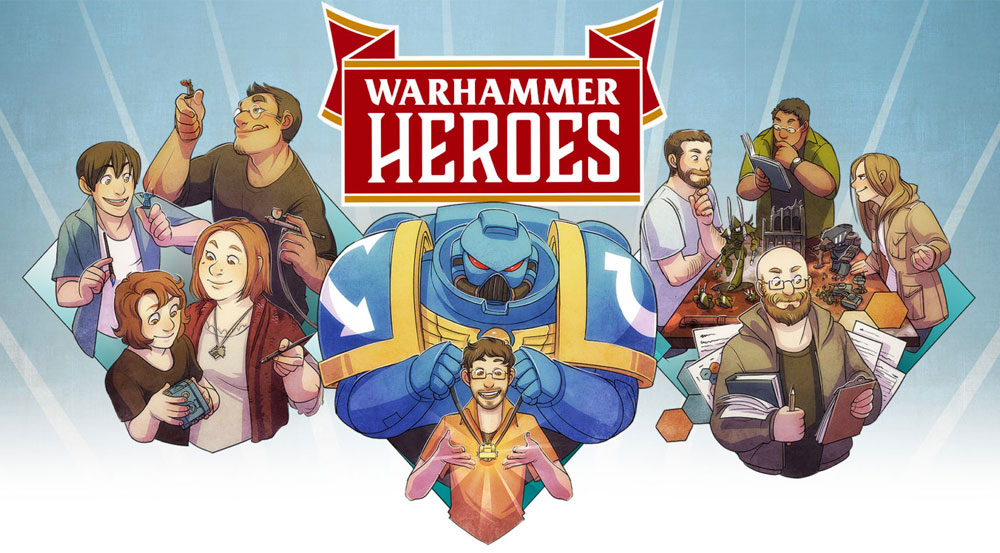 Of course, events like LVO aren’t just a chance to show off awesome new releases – they’re also a perfect chance to recognise some of the incredible people that make Warhammer so special. From tireless event organisers and club managers to those travelling hundreds (even thousands) of miles to throw dice and have fun, these folks are a testament to the strength of our community.

As such, we’re proud to take this opportunity to reveal our 2020 Warhammer Heroes – those paragons of the Warhammer hobby who deserve special mention for their contributions. 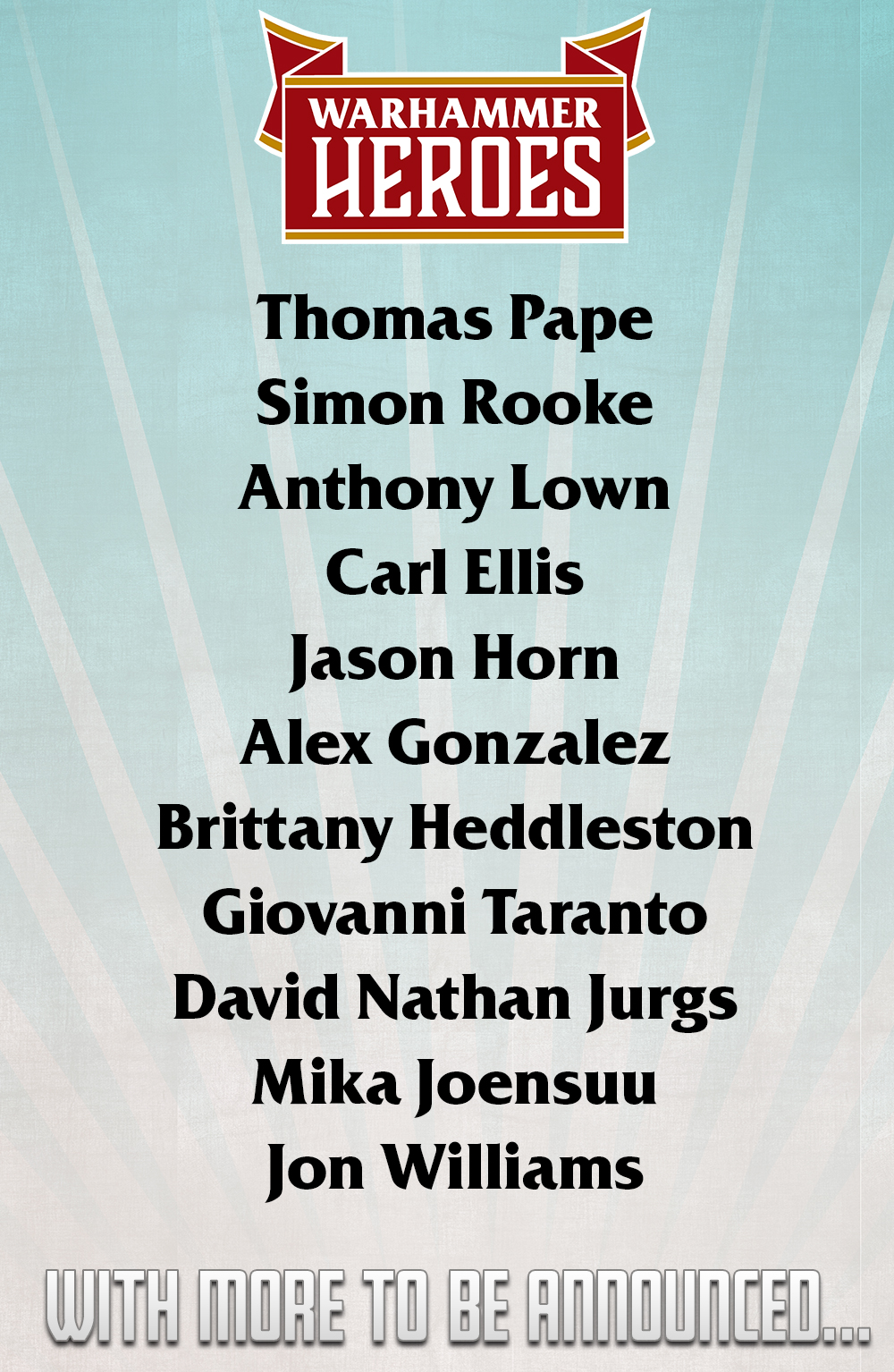 And before we go…

Finally, we have something that a lot of you have been waiting for – more on Angels of Death! So, without further ado… ACTION!

As a special treat for attendees – they did come all the way out to Vegas to show their love for Warhammer, after all – we showed them a slightly longer cut. There will be more for everyone to look at soon, so in the meantime, have an ogle at some hi-res screenshots.

Wow! That’s a lot and the event is just getting started. We’re going to be at LVO all weekend, and the Warhammer Live team will be bringing you coverage of the Warhammer 40,000 Championships over on Twitch.

2020 is shaping up to be another incredible year for Warhammer. We already know there are some great things to look forward to at the next major Warhammer Preview at AdeptiCon in March, so be sure to sign up to our newsletter, as it’s the best way to get all the news as soon as it breaks.

Let us know what you’re most excited about on our Warhammer 40,000, Warhammer Age of Sigmar and Forge World Facebook pages.

Five Things You Need to Know About the AdeptiCon Warhammer Preview

The Warhammer Preview is coming – here’s what you need to know.