Order returns to the Realms, great cities flourish, but in the shadows – Chaos rises once more…

Shadows over Hammerhal is the second Warhammer Quest adventure set in the Mortal Realms, following on from the hugely popular Silver Tower. We announced this set was on its way in January, and for those of you who immediately gathered an eager party of like-minded heroes and have been waiting ever since, we’re pleased to let you know it will be available to pre-order this weekend.

To give you a little taste ahead of time, we thought we’d give you guys a good old-fashioned unboxing. 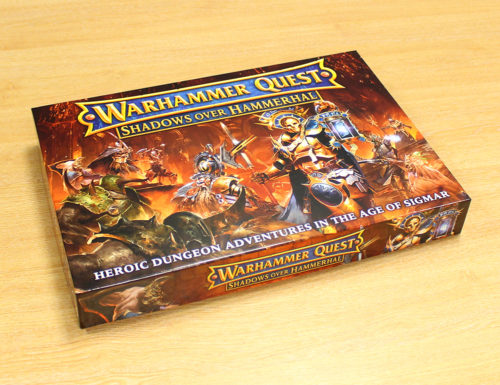 The box itself is as you’d expect of a Warhammer Quest set: a dynamic scene depicting our heroes (a Stormcast Eternal, 2 Aelves and a Duardin) battling against a horde of Chaos worshipers. The backdrop for the battle already gives the feel for the setting – the grand but already tainted dungeons of one of the new, monumental free cities. 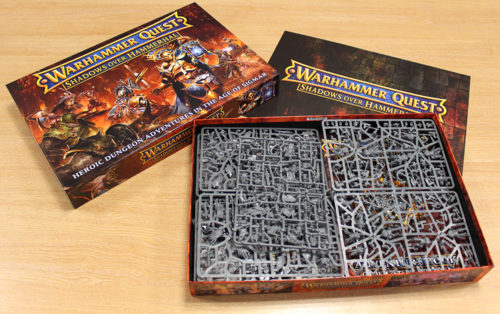 There are a lot of models in the set. Unlike Warhammer Quest: Silver Tower, these aren’t new single-pose models, but full unit kits. The Chaos forces contained within are a veritable mortal army of Chaos worshipers: 10 Kairic Acolytes, 5 Putrid Blightkings, 10 Bloodreavers and a Chaos Sorcerer. Up against them, we have our heroes: Lord-Castellant, Cogsmith, Black Ark Fleetmaster, Loremaster and an ever-loyal Gryph-hound.

There are three books in the box.

The Assembly Guide has colour step-by-step instructions to assemble the miniatures from the box in the various poses you can build them (handy, as different equipment set-ups have different effects in the game).

The Guidebook is the adventurer’s guide to the City of Hammerhal. In there are the basic rules for the game, as well as painting guides for the miniatures, and perhaps most excitingly for fans of the Warhammer Age of Sigmar lore (like the Loremaster, we assume…) a 30-page, illustrated section detailing the backstory of the quest, the heroes and the mighty city of Hammerhal itself.

The final book is the Adventure book, but we didn’t look in that one, as it says “Gamemaster’s eyes only!”, and we didn’t want to draw their attention, lest we suffer their wrath… 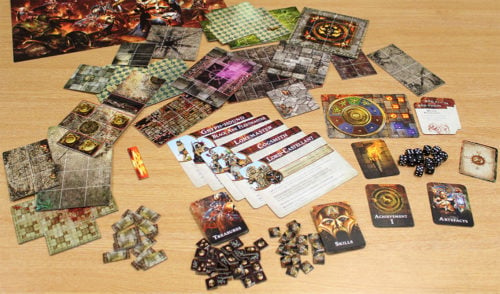 Also in the box are all the the other things you need to play: card board sections to represent the dungeons and streets of Hammerhal, plus dice, and cards galore.

So there you have it. The new game. You can pre-order yours this weekend, and find it in local stores from the 25th.

We’ll have loads more info on all the various aspects of the game through the whole of next week, right here on the Warhammer Community site.

Let us know what you’re most excited about over on the Warhammer Age of Sigmar Facebook page.

Learn about some of the Titan Legions and Knight Houses from the latest expansion for Adeptus Titanicus.

Blackstone Fortress has introduced us to a world of weird and wonderful new units for Warhammer 40,000. Here are our top 10.